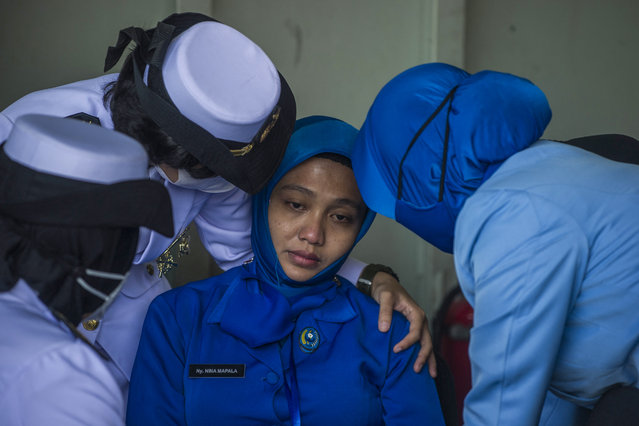 Military personnel console a sailor's wife during a remembrance ceremony for the crew of the Indonesian navy submarine KRI Nanggala that sank on April 21 during a training exercise, on the deck of the hospital ship KRI Dr. Soeharso off the coast of Bali on April 30, 2021. (Photo by Juni Kriswanto/AFP Photo) 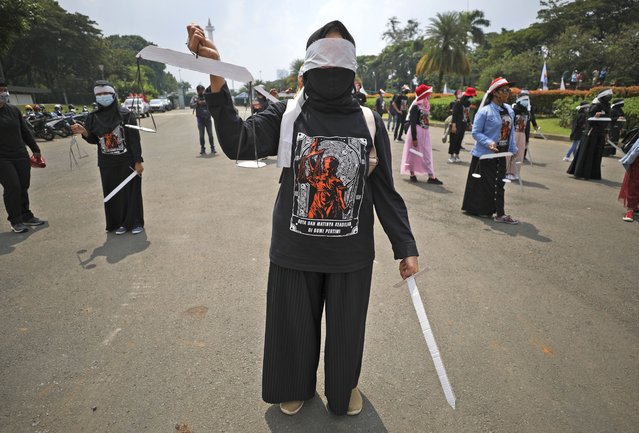 Indonesian workers stand spaced apart as a precaution against coronavirus outbreak, while holding mock sword and scales to symbolize justice during a May Day rally in Jakarta, Indonesia, Saturday, May 1, 2021. Workers in Indonesia marked international labor day on Saturday curtailed by strict limits on public gatherings to express anger at a new law they say could harm labor rights and welfare. (Photo by Dita Alangkara/AP Photo) 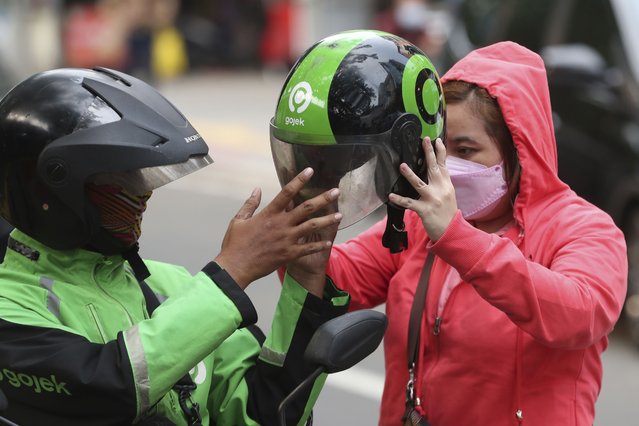 A Gojek driver gives a helmets to a customer in Jakarta, Indonesia, Monday, May 17, 2021. Indonesian ride hailing company Gojek and e-commerce firm Tokopedia said Monday that they are merging, in the largest ever deal in the country's history. (Photo by Achmad Ibrahim/AP Photo) 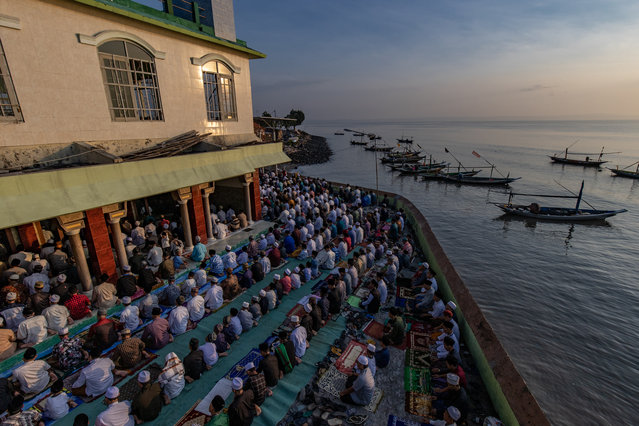 Indonesian Muslims perform Eid Al-Fitr prayer at Al-Mabrur mosque on May 13, 2021 in Surabaya, Indonesia. Muslims worldwide observe the Eid Al-Fitr prayer to mark the end of Ramadan and the beginning of the new month of blessing Shawwal 1442 Hijriah. (Photo by Robertus Pudyanto/Getty Images) 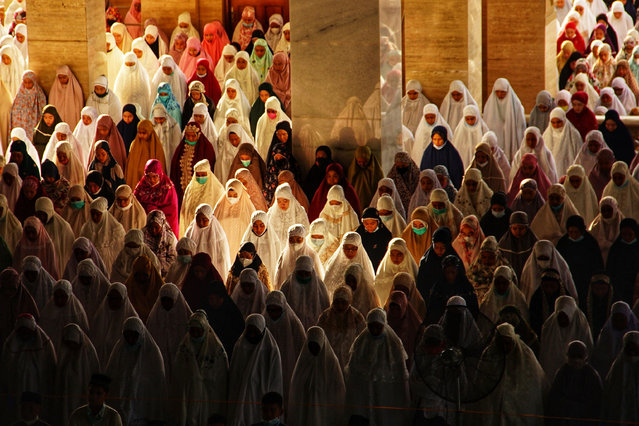 Muslims attend Eid al-Fitr prayers, marking the end of the holy month of Ramadan, at the Islamic Center in Lhokseumawe on May 13, 2021. (Photo by Azwar Ipank/AFP Photo) 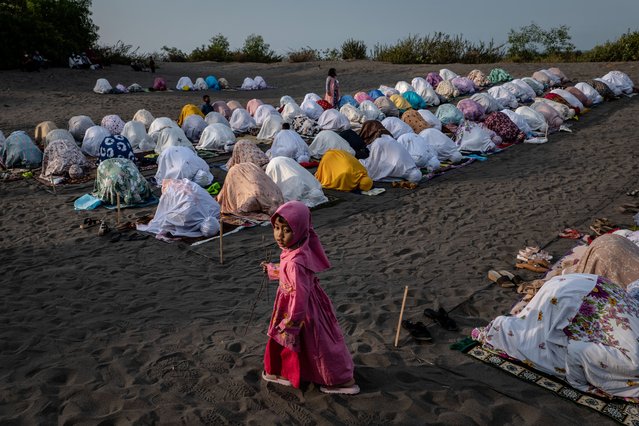 Indonesian muslims perform an Eid Al-Fitr prayer on the “sea of sands” at Grogol village on May 13, 2021 in Yogyakarta, Indonesia. Eid al-Fitr marks the end of Ramadan, during which Muslims in countries around the world spend time with family, offer gifts and often give to charity. The Indonesian government has banned domestic travel to prevent the spread of COVID-19, preventing people from returning home for festivities. (Photo by Ulet Ifansasti/Getty Images) 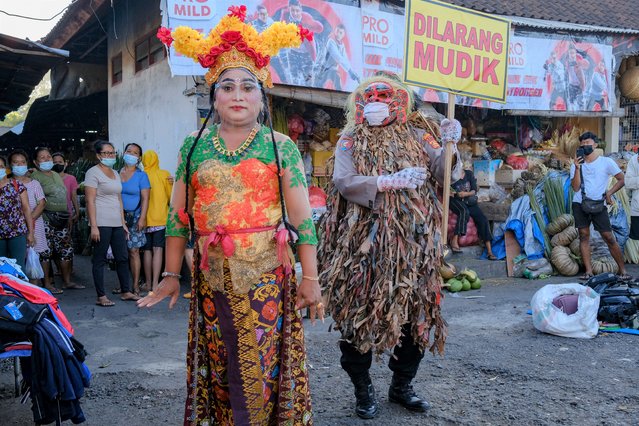 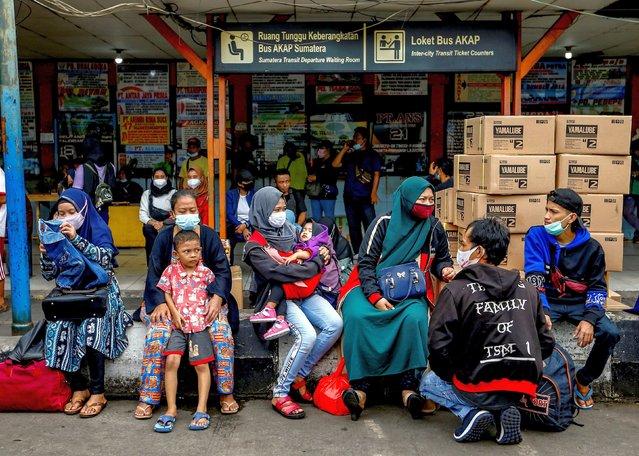 Passengers wait for a bus to return to their hometowns, known locally as “mudik”, ahead of the Eid al-Fitr celebration, amid the coronavirus disease (COVID-19) outbreak, at Kalideres terminal, in Jakarta, Indonesia, May 3, 2021. (Photo by Ajeng Dinar Ulfiana/Reuters) 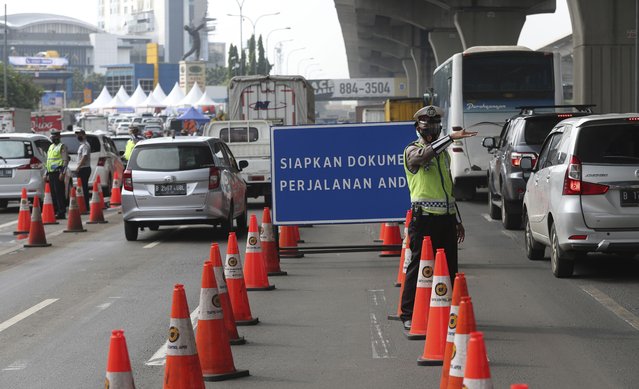 Indonesian police guard at a checkpoint during the imposition of large-scale restriction to curb the spread of the coronavirus on a toll road in Cikarang, West Java, Indonesia, Thursday, May 6, 2021. Indonesia is prohibiting travel during the popular homecoming period to celebrate Eid al-Fitr. The ban started Thursday and will last for 12 days, exempting only civil servants, police and military officers, and those who need to travel for work. (Photo by Achmad Ibrahim/AP Photo) 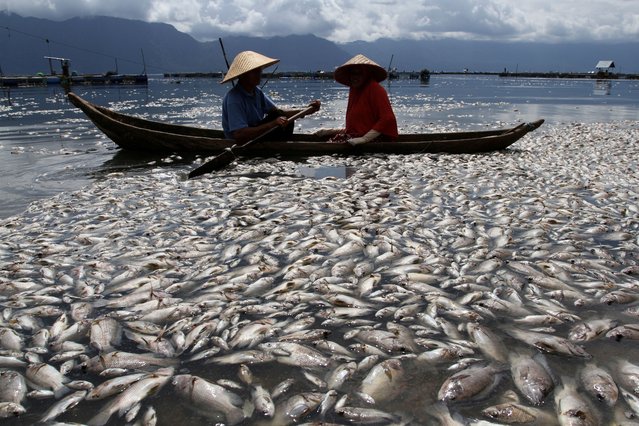 Fishermen are seen near thousands of fish found dead at Lake Maninjau due to lack of oxygen levels at the bottom of the lake and bad weather that hit the area in Agam, West Sumatra Province, Indonesia on April 29, 2021. (Photo by Muhammad Arif Pribadi/Antara Foto via Reuters) 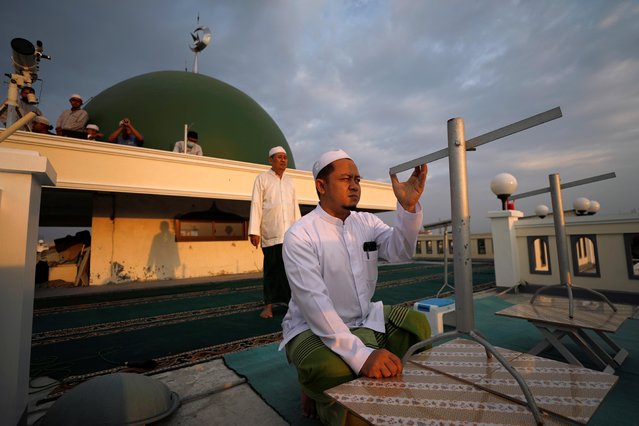 Muslims use traditional tools to look for the position of the moon to mark the end of the holy month of Ramadan, ahead the Eid al-Fitr festival, at Al-Musyari'in mosque in Jakarta, Indonesia, May 12, 2021. (Photo by Willy Kurniawan/Reuters) 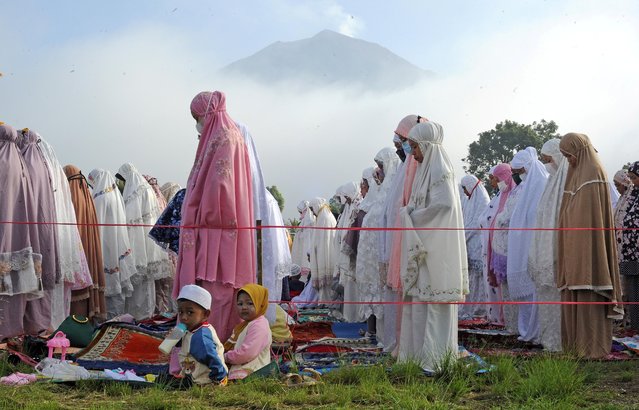 Indonesian Muslims attend a mass prayer session at Gunung Labu field as Mount Kerinci Volcano is seen in the background during Eid al-Fitr, marking the end of the holy fasting month of Ramadan, in West Kayu Aro, Kerinci, Jambi province, Indonesia, May 13, 2021. (Photo by Wahdi Septiawan/Antara Foto via Reuters) 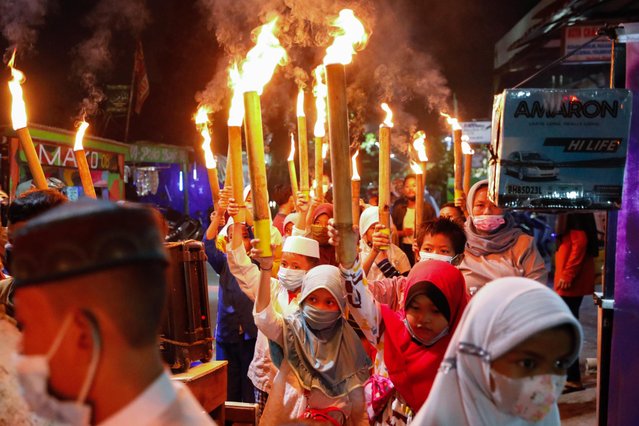 Muslim children carry torches around the neighbourhood during a parade to celebrate Eid al-Fitr, marking the end of the holy fasting month of Ramadan, amid the coronavirus disease (COVID-19) pandemic in Jakarta, Indonesia, May 12, 2021. (Photo by Willy Kurniawan/Reuters) 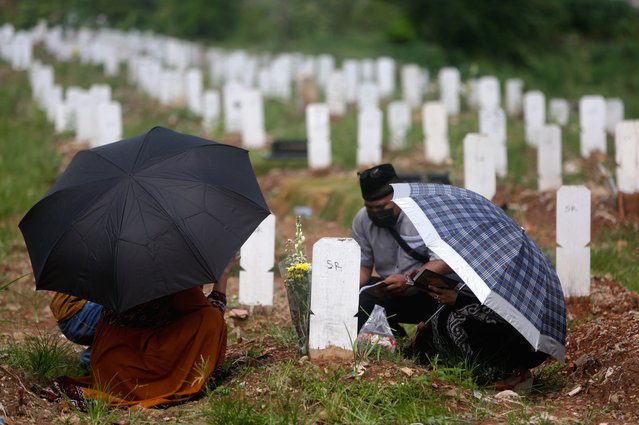 Residents pray before their relative's grave at a cemetery for victims of COVID-19 in Jakarta, Indonesia, 17 May 2021. The Jakarta government allowed residents toresume visits to the city's Public Cemetery on 17 May amid the ongoing coronavirus pandemic. (Photo by Adi Weda/EPA/EFE) 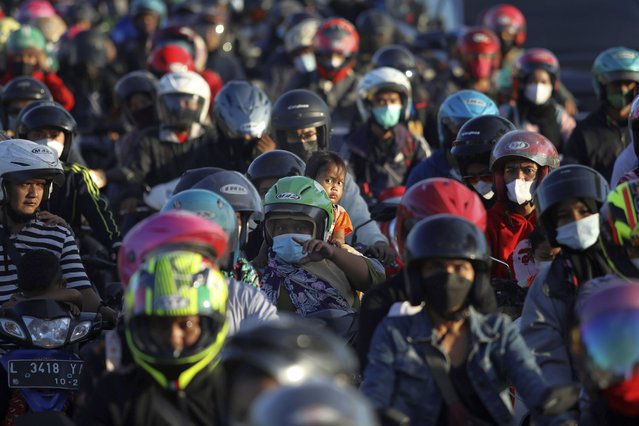 Motorists queue up to cross Suramadu Bridge connecting Java and Madura Island, as they head to their home villages to celebrate Eid al-Fitr holiday that marks the end of Ramadan, in Surabaya, East Java, Indonesia, Wednesday, May 12, 2021. The mass exodus out of major cities in the world's most populous Muslim country is underway despite travel prohibition imposed by the government ahead of the holiday to prevent spikes in COVID-19 cases. (Photo by Trisnadi/AP Photo) 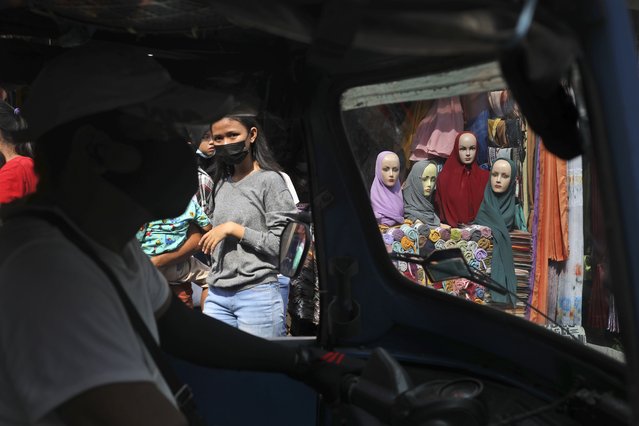 Mannequins and women wearing masks to curb the spread of coronavirus outbreak are seen through the windows of a three-wheeled motorized taxi called “bajaj”, during the last week of Ramadan at a market in Jakarta, Indonesia, Tuesday, May 4, 2021. People flock markets and shopping malls in the capital as they shop for food and new clothings in preparation for Eid al Fitr holiday that marks the end of the holiest month in Islamic calendar. (Photo by Dita Alangkara/AP Photo) 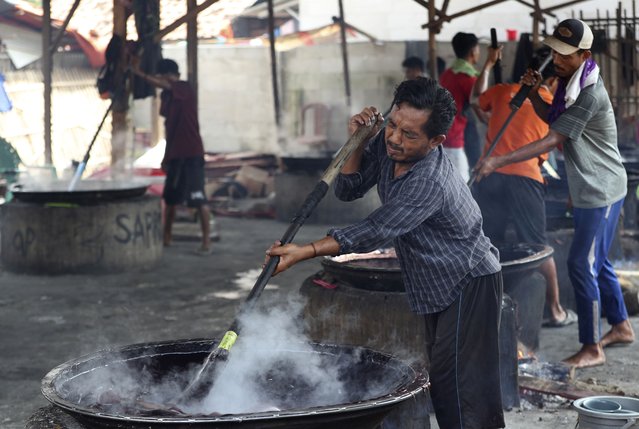 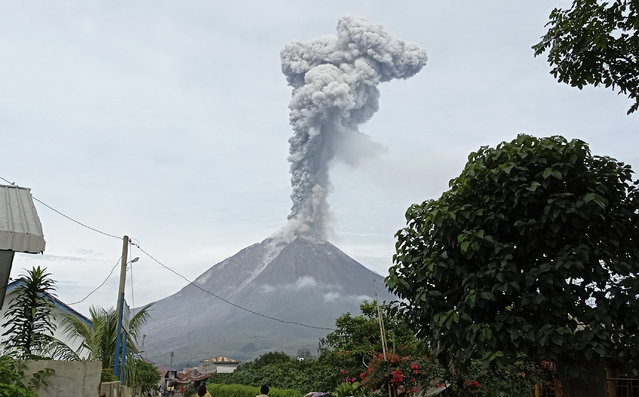 Mount Sinabung releases volcanic materials during an eruption in Karo, North Sumatra, Indonesia, Friday, May 7, 2021. Sinabung is among more than 120 active volcanoes in Indonesia, which is prone to seismic upheaval due to its location on the Pacific “Ring of Fire”, an arc of volcanoes and fault lines encircling the Pacific Basin. (Photo by Sastrawan Ginting/AP Photo) 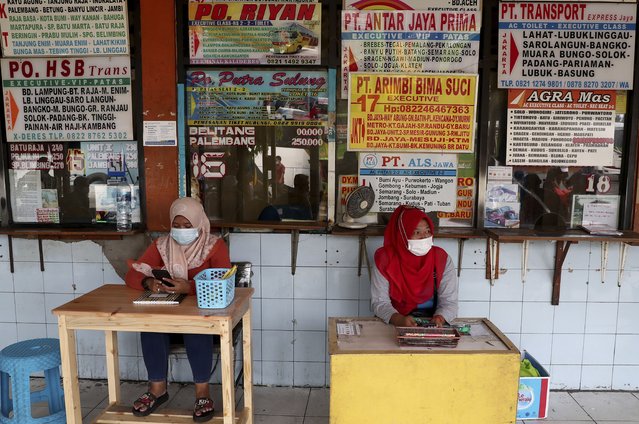 Employees wait for customers at the ticket counters at the Kalideres bus terminal in Jakarta, Indonesia, Wednesday, May 5, 2021. The mass exodus out of major cities in the world's most populous Muslim country is underway despite travel restrictions imposed by the government to prevent the spread of coronavirus outbreak, as people are heading home to their villages to celebrate Eid al-Fitr holiday that marks the end of the holy fasting month of Ramadan on May 13. (Photo by Tatan Syuflana/AP Photo) 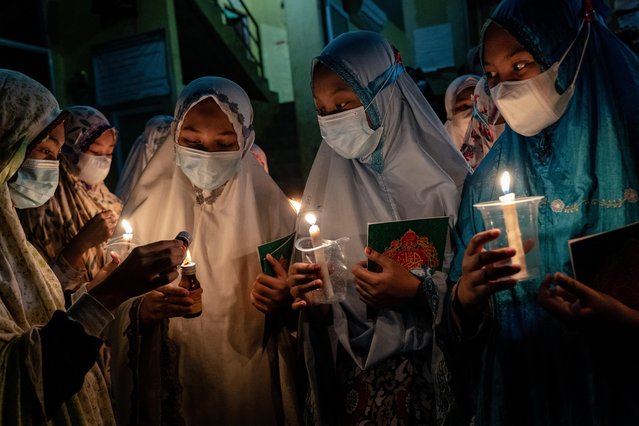 Students wearing protective masks hold candles as they prepare to read the Quran during ritual Nuzulul Koran and Laylat al-Qadr (Night of Destiny) which marks the night in which the holy Quran was first revealed to the Prophet Mohammed at the Nurul Hidayah Al-Mubarokah boarding school on May 2, 2021 in Boyolali, Central Java, Indonesia. Laylat al-Qadr is was one of the odd-numbered nights of the last ten days of Ramadan. Ramadan, the ninth month of the Islamic calendar is a month of fasting, prayers and recitation of the Quran. (Photo by Ulet Ifansasti/Getty Images)
Edit Del
27 May 2021 08:54:00, post received 0 comments
Publication archive:
←   →
Popular tags:
All tags
Last searches: