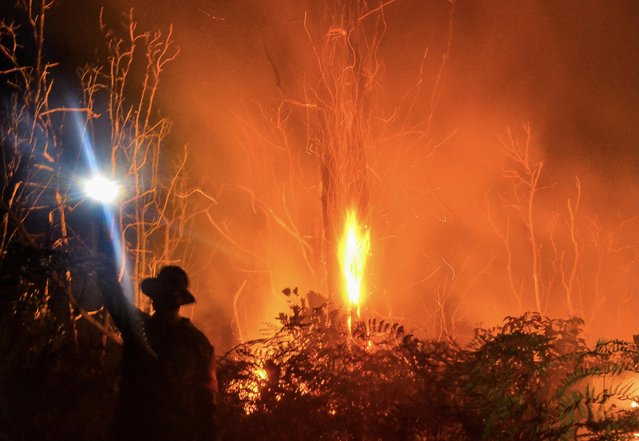 Firefighters battle a forest fire in Pekanbaru, Indonesia's Riau province on March 2, 2021, amid an increase of hotspots in the region. (Photo by Wahyudi/AFP Photo) 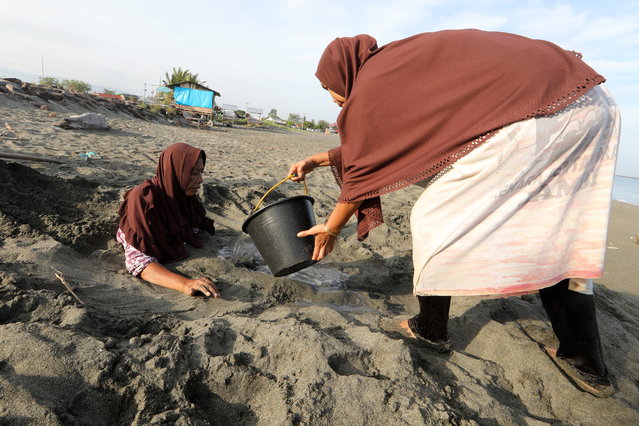 Rumiati, 65, who suffered a stroke, sits in the sand receiving a traditional medical treatment with black sand at Syiah Kuala beach, Banda Aceh, Indonesia, 26 February 2021. Locals in the area believe that bathing with black sand can cure and prevent strokes and hypertension. (Photo by Hotli Simanjuntak/EPA/EFE) Traders display their chilies at a traditional market in Banda Aceh, Indonesia, 22 February 2021. According to The Bank of Indonesia, in 2021 the Indonesian gross domestic product (GDP), an indicator of economic growth, is expected to reach 4.3 to 5.3 percent, a revised and conservtive forecast issued due to concerns that increasing COVID-19 cases will stall economic growth. (Photo by Hotli Simanjuntak/EPA/EFE) 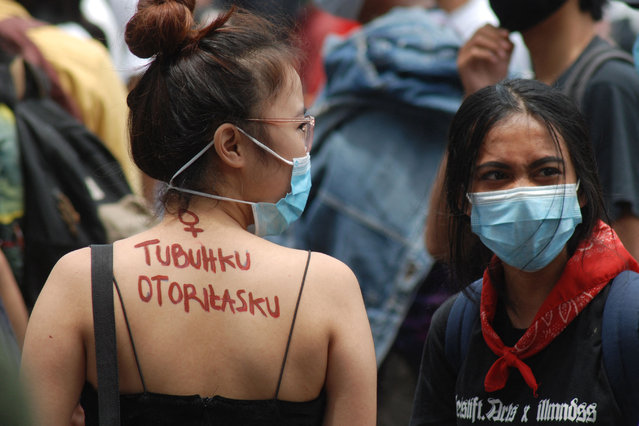 A slogan that reads “my body, my authority” is seen on an activist's back during a protest marking International Women's Day in Bandung on March 8, 2021. (Photo by Timur Matahari/AFP Photo) 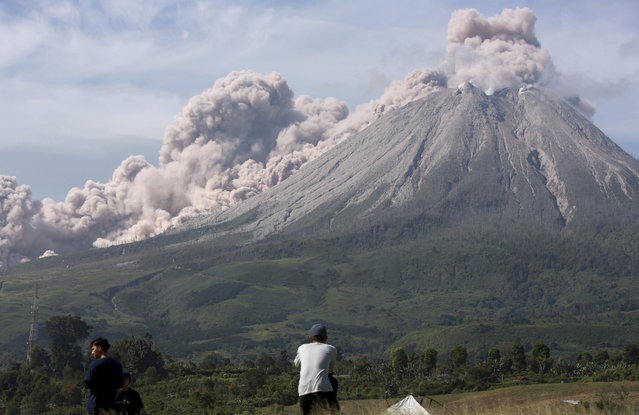 People watch as Mount Sinabung spews volcanic materials during an eruption in Karo, North Sumatra, Indonesia, Thursday, March 11, 2021. The volcano unleashed an avalanche of searing gas clouds flowing down its slopes during eruption on Thursday. No casualties were reported. (Photo by Binsar Bakkara/AP Photo) 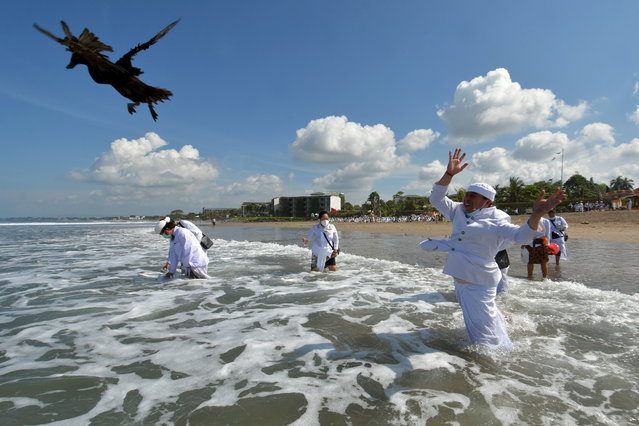 A Balinese Hindu worshiper throws a duck as he prays at a beach during a Melasti purification ceremony ahead of the holy day of Nyepi in Badung, Bali, Indonesia on March 11, 2021. (Photo by Nyoman Hendra Wibowo/Antara Foto via Reuters) 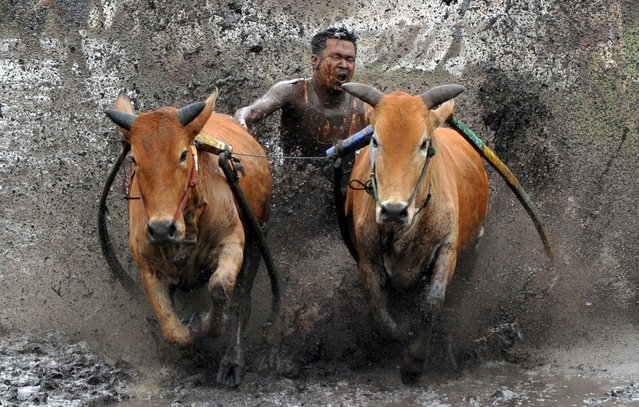 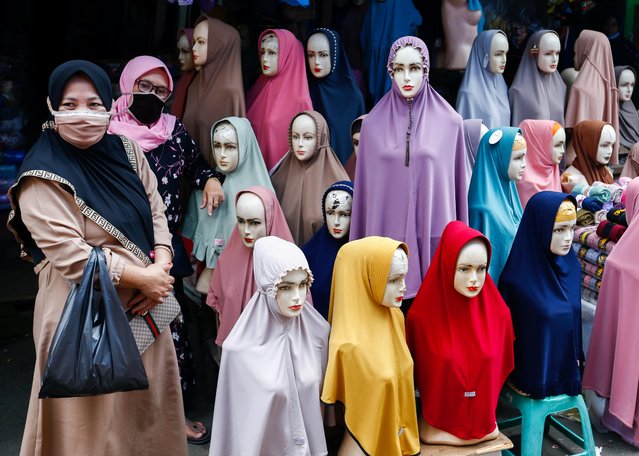 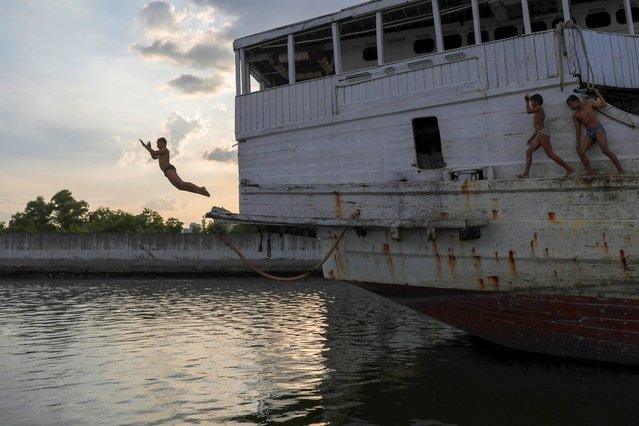 A boy jumps into the water at Sunda Kelapa port, on World Water Day in Jakarta, Indonesia, March 22, 2021. (Photo by Willy Kurniawan/Reuters) 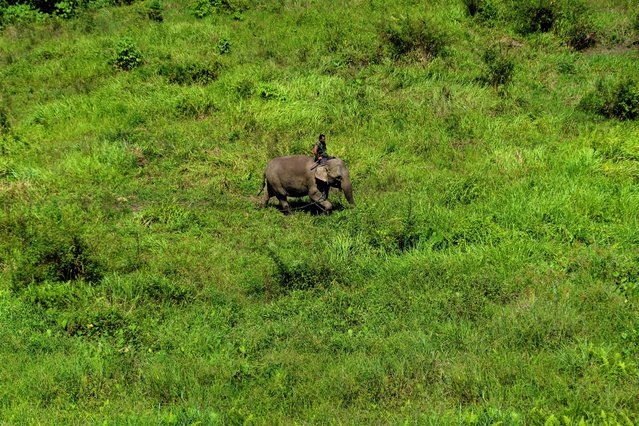 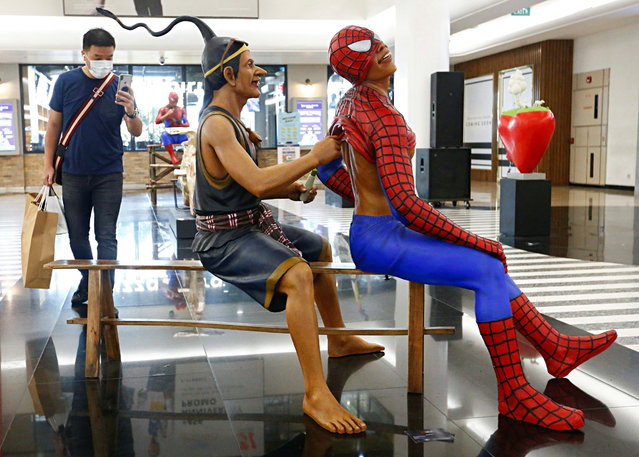 A man wearing a protective face mask takes a photo near an art exhibition at a shopping mall, amid the coronavirus disease (COVID-19) outbreak in Jakarta, Indonesia, March 15, 2021. (Photo by Ajeng Dinar Ulfiana/Reuters) 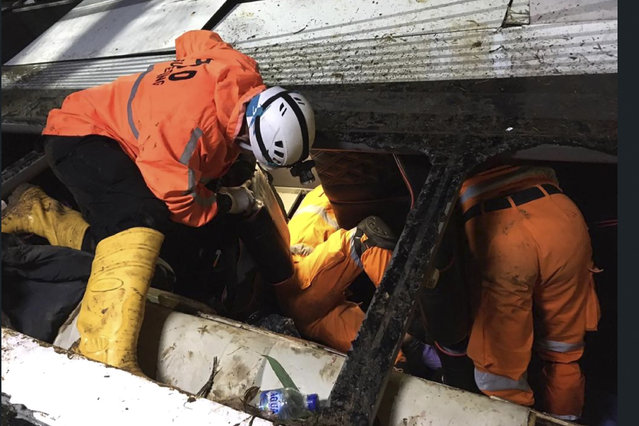 In this photo released by National Search and Rescue Agency (BASARNAS), rescuers search for survivors and victims inside the wreckage of a bus that plunged into a ravine in Sumedang West Java, Indonesia, Thursday, March 11, 2021. The tourist bus plunged into the ravine after its brakes apparently malfunctioned, killing a number of people, police and rescuers said. (Photo by BASARNAS via AP Photo) 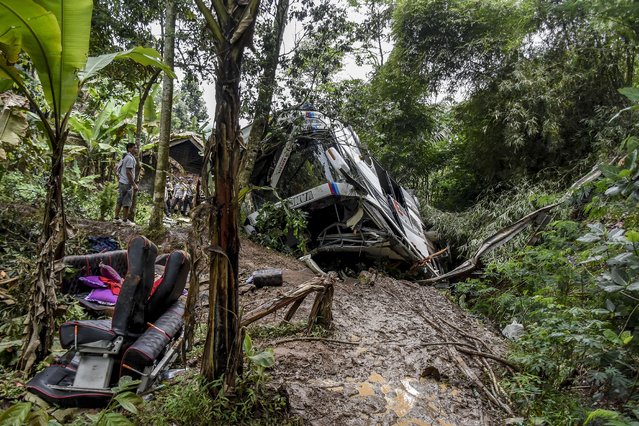 Residents inspect the wreckage of a bus that plunged into a ravine in Sumedang West Java, Thursday, March 11, 2021. The tourist bus carrying a group of Islamic junior high school students, teachers and parents plunged into the 20-meter (65-foot) -deep ravine after its brakes apparently malfunctioned, killing a number of people, police and rescuers said. (Photo by Ahmad Fauzan/AP Photo) 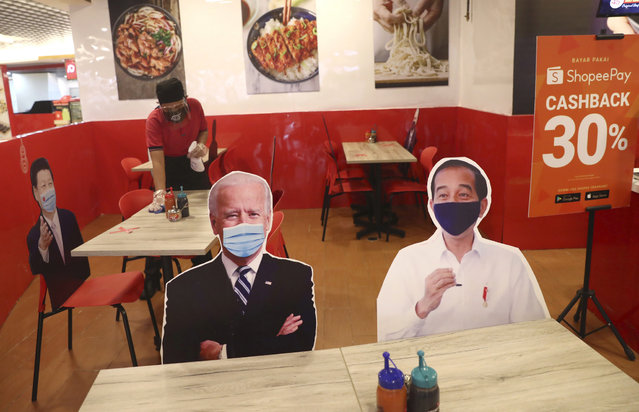 An employee cleans a table at a noodle restaurant that uses cardboard cutouts of U.S. President Joe Biden, Indonesian President Joko Widodo and other world leaders as physical distancing markers amid concerns of the spread of coronavirus outbreak, at a shopping mall in Jakarta, Indonesia, Tuesday, March 9, 2021. (Photo by Tatan Syuflana/AP Photo) 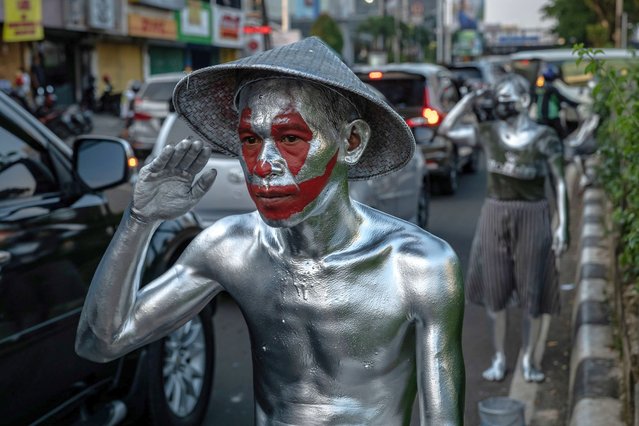 Junaidi (40), wearing silver paint begs for money on the street, was an employee at a company, but due to the pandemic he was laid off and become a “silver men” for a month on March 11, 2021 in Depok, Indonesia. “Silver Men”, called “Manusia Silver” in Indonesian language, are an economically underprivileged group of people who have turned to a special form of begging to make ends meet. Using a mixture of screen-printing powder and cooking oil to form a highly toxic improvised metallic paint, they coat their bodies for dramatic effect and transform themselves into living statues. Manusia Silver can earn about 50,000 Indonesian rupiah to 100.000 Indonesian rupiah ($3.50 to $7) per day. Indonesia's poor account for 26.42 million of a population of over 270 million, as the coronavirus pandemic disrupted business activity in Indonesia, 2.67 million people have lost their jobs, according to Statistics Indonesia (BPS). (Photo by Ulet Ifansasti/Getty Images) 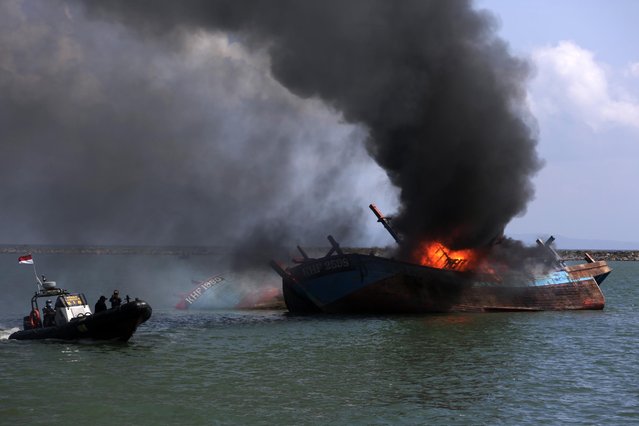 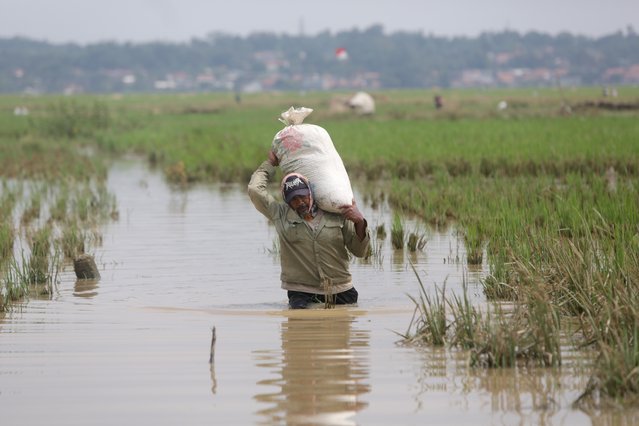 An Indonesian farmer carries a sack of rice during a harvest at a paddy field in Kerawang, Indonesia, 11 March 2021. (Photo by Adi Weda/EPA/EFE) 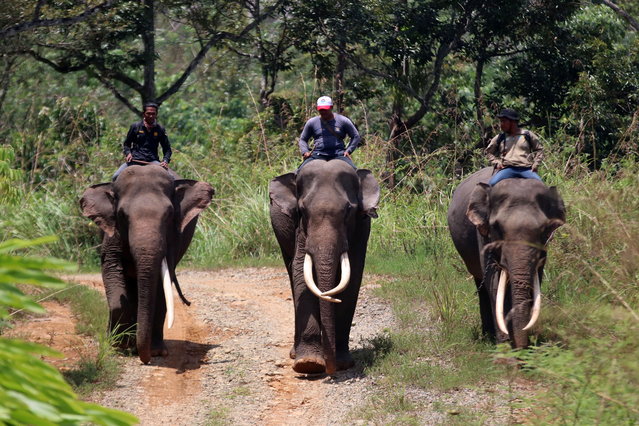 Men sit atop elephants as they patrol to prevent conflicts between wild elephants which enter settlements and plantations in Bener Meriah, Aceh province, Indonesia on March 15, 2021. (Photo by Irwansyah Putra/Antara Foto via Reuters) 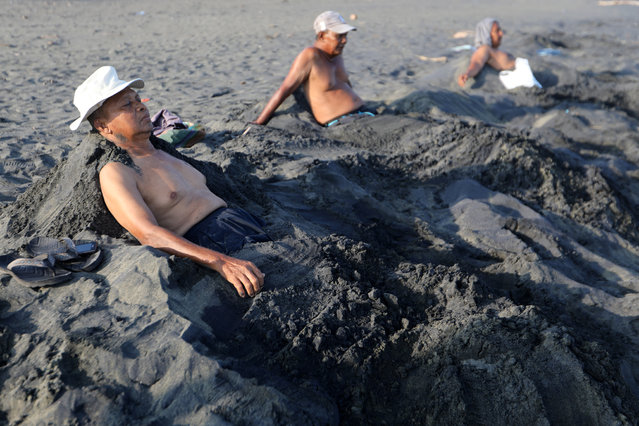 Aceh residents take a sand bath at Syiah Kuala beach, in Banda Aceh, Indonesia, 15 March 2021. The tourism industry is the economic sector that has suffered the most from the COVID-19 pandemic in Indonesia as foreign and local tourist visits are still very limited due to social restrictions and travel restrictions from abroad for tourists entering Indonesia. (Photo by Hotli Simanjuntak/EPA/EFE)
Edit Del
30 Mar 2021 10:05:00, post received 0 comments
Publication archive:
←   →
Popular tags:
All tags
Last searches: