Fact A Look at Life in Indonesia, Part 1/2 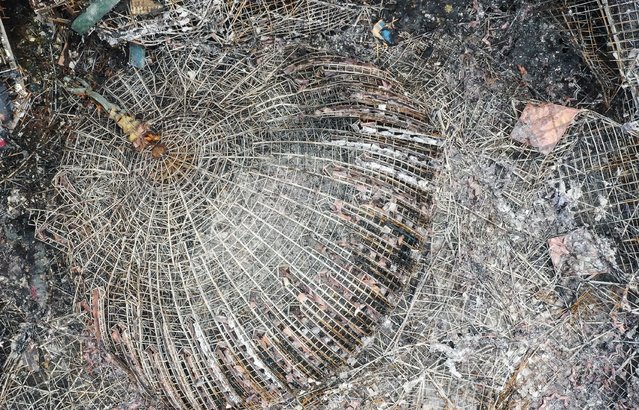 A photo taken with a drone shows the collapsed dome of the Jakarta Islamic Centre Grand Mosque in Jakarta, Indonesia, 21 October 2022. The dome of the mosque caught fire and collapsed during renovation works on 19 October. The Jakarta Islamic Center opened for public in 2003, built in an area that used to be a prostitution site, locally known as Kramat Tunggak. (Photo by Mast Irham/EPA/EFE) 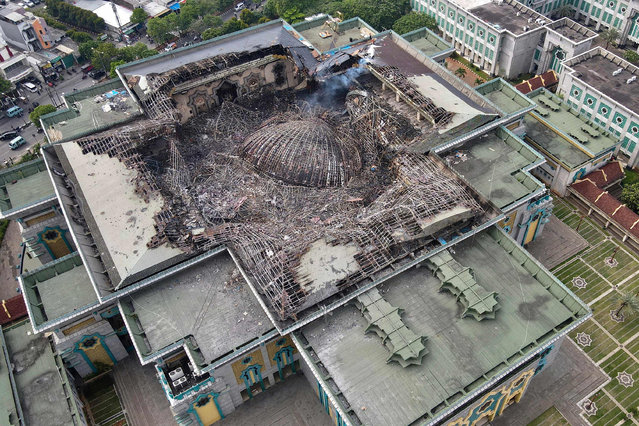 This aerial picture taken on October 20, 2022 shows the smouldering remains of the collapsed dome of the Islamic Centre mosque in Jakarta, which caught fire during ongoing renovation work. (Photo by Bagus Saragih/AFP Photo) 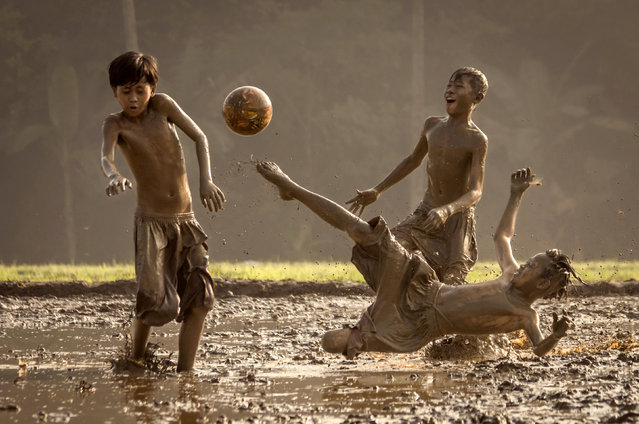 Boys enjoy a kickabout in a recently harvested rice field in the village of Rumpin, in West Java, Indonesia in October 2022. The photographer said their parents turned a blind eye when they came home filthy because there is nowhere else to play football. (Photo by Erwin Gucci/Solent News) 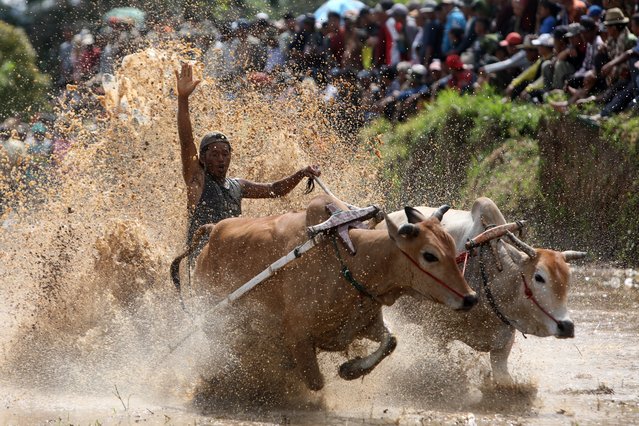 An Indonesian jockey competes during one of the heats of the traditional Pacu Jawi cow race on the muddy unplanted paddy fields of Pariangan, Tanah Datar, West Sumatra province, Indonesia, 22 October 2021. The Pacu Jawi is held by farmers before the start of the new harvesting season or to celebrate the success of the harvesting season. The Pacu Jawi tradition is also held as an effort to develop the local community's economy by attracting tourists to visit the entertaining event. (Photo by Hotli Simanjuntak/EPA/EFE) 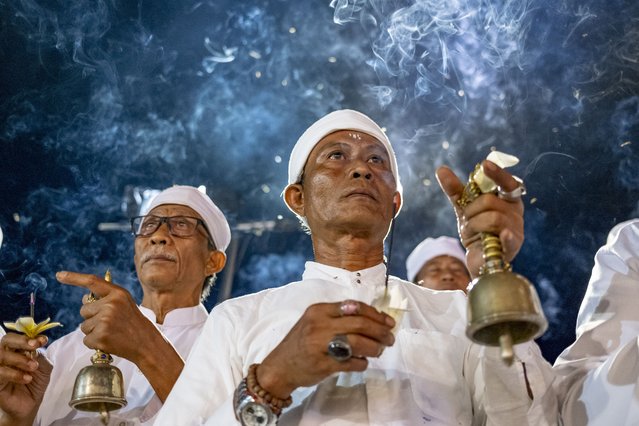 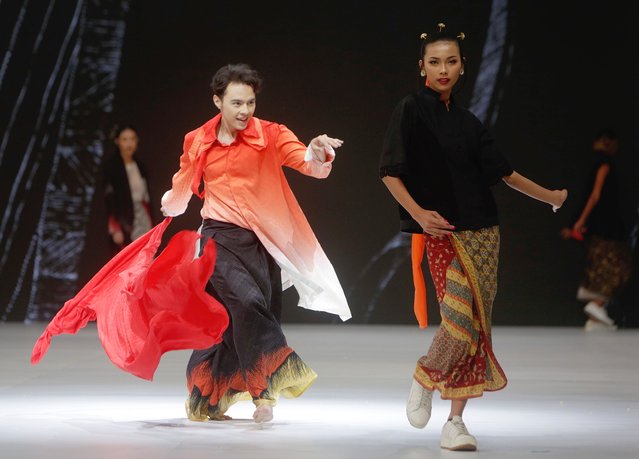 Models present creations by the Indonesian fashion brand Bin House during the Jakarta Fashion Week 2023 in Jakarta, Indonesia, 27 October 2022. The event ?runs from 24 to 30 October 2022. (Photo by Adi Weda/EPA/EFE/Rex Features/Shutterstock) 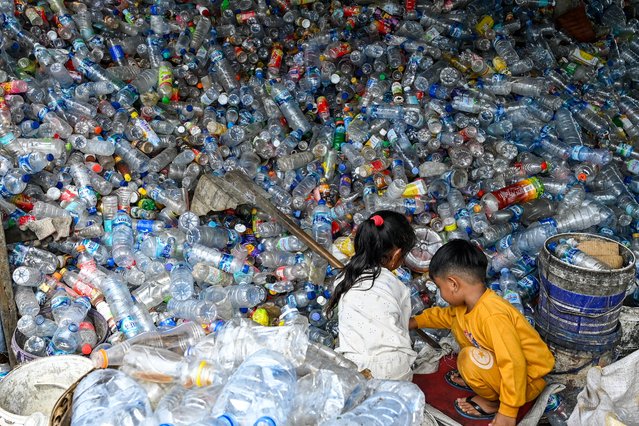 Children play with plastic bottles at a waste collection site in Banda Aceh on October 28, 2022. (Photo by Chaideer Mahyuddin/AFP Photo) 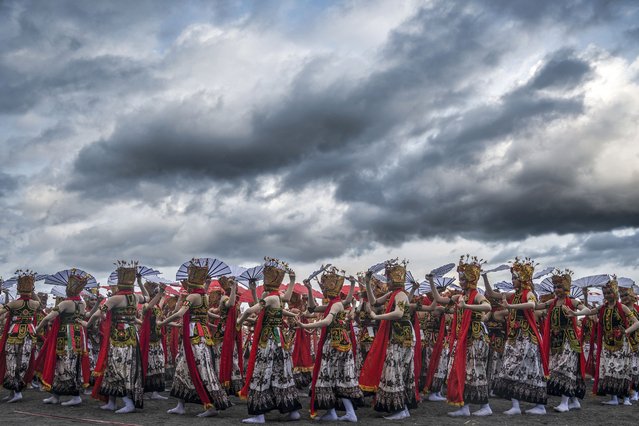 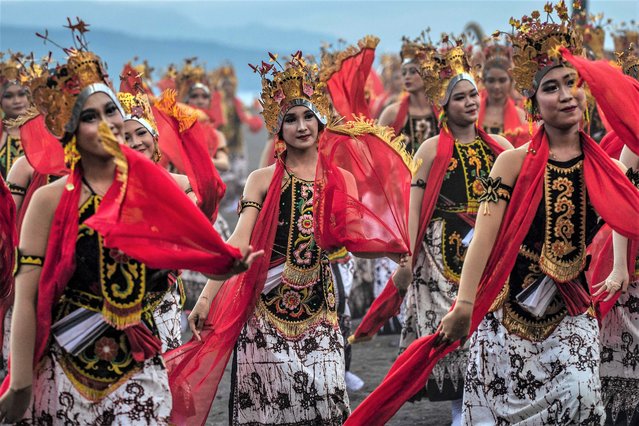 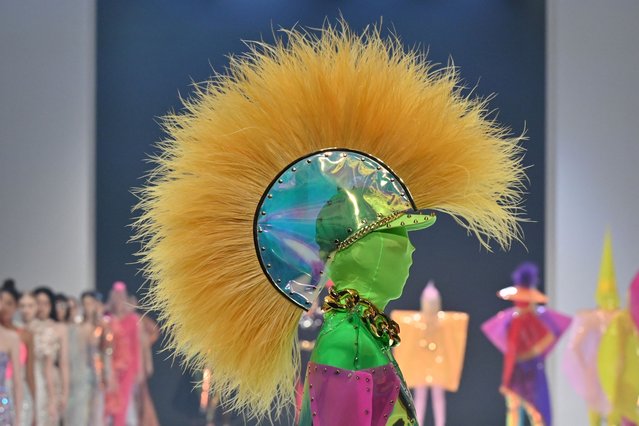 Models present creations by Rinaldy Yunardi during the 2022 Jakarta Fashion Week in Jakarta on October 30, 2022. (Photo by Adek Berry/AFP Photo) 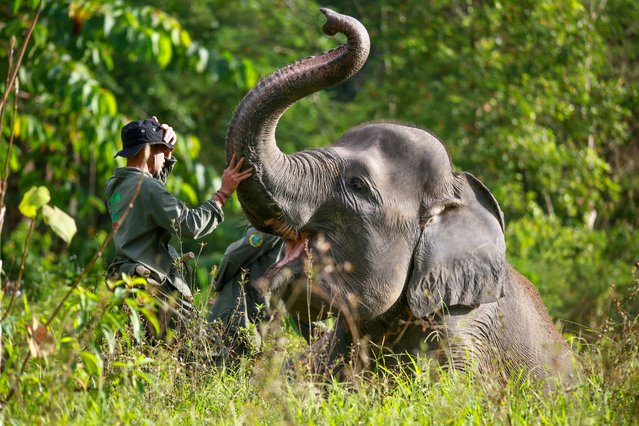 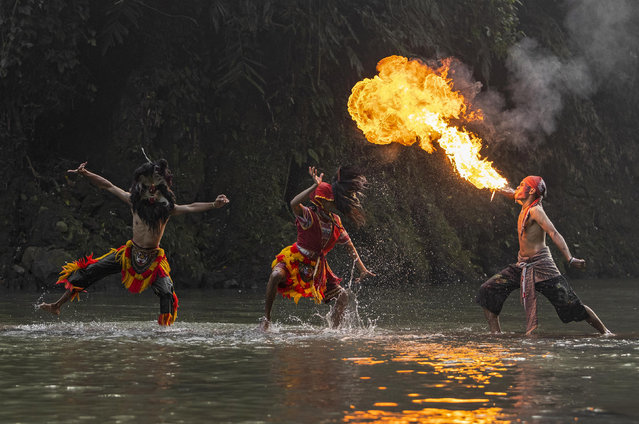 Dancers perform the traditional Kuda Lumping in Bogor, Indonesia early November 2022. They are said to enter a trance-like state as they perform, and often claim not to remember the dance once they awaken. (Photo by Sita Gramich/Solent News) 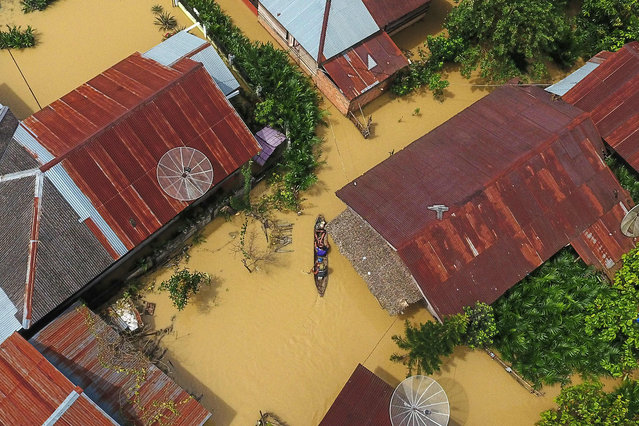 This aerial photo taken on November 5, 2022 shows people on a boat making their way through a street flooded due to torrential rains in Aceh Tamiang, Aceh province. (Photo by Zikri Maulana/AFP Photo) 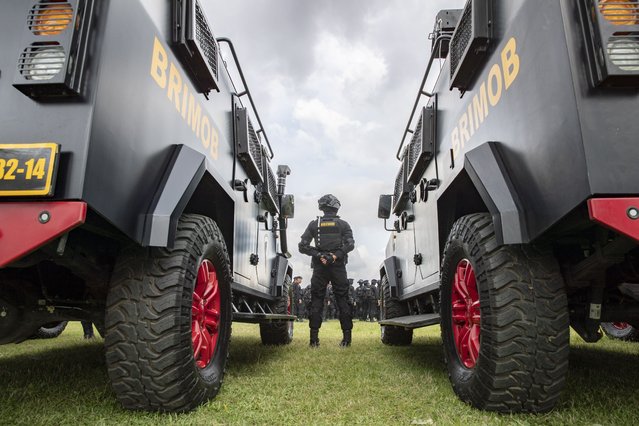 An Indonesian police officer takes part in security preparations for the upcoming G20 meeting in Denpasar, Bali, Indonesia, 07 November 2022. Bali will host the 17th Group of 20 (G20) Heads of State and Government Summit from 15 to 16 November 2022. (Photo by Made Nagi/EPA/EFE) 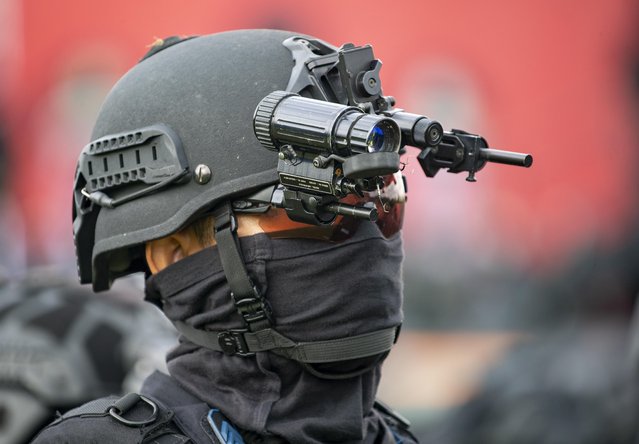 An Indonesian police officer takes part in security preparations for the upcoming G20 meeting in Denpasar, Bali, Indonesia, 07 November 2022. (Photo by Made Nagi/EPA/EFE) 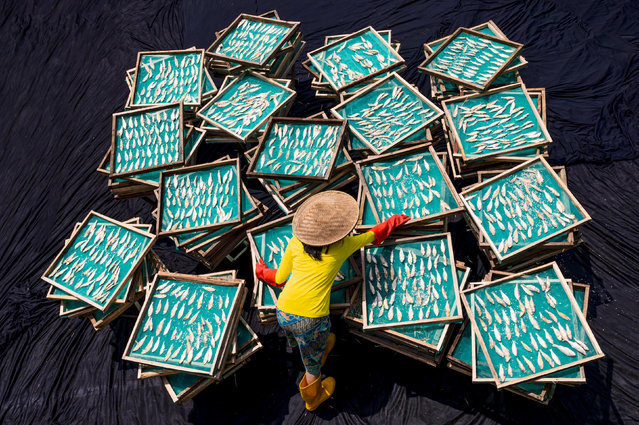 A worker dries sardines on brightly coloured trays before salting them in Bogor, West Java in the first decade of November 2022. (Photo by Lisdiyanto Suhardjo/Solent News & Photo Agency) 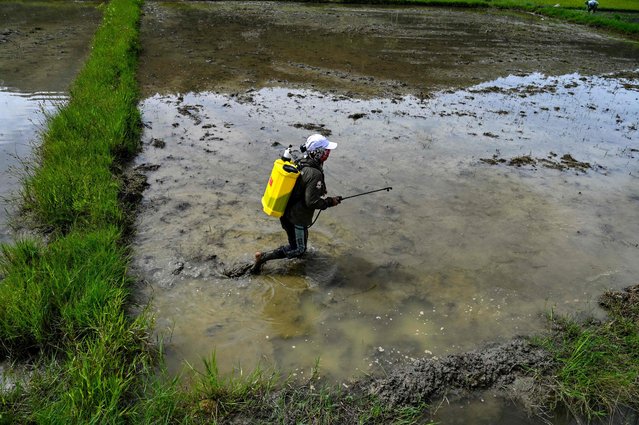 A farmer sprays pesticide in a paddy field in Pekan Bada, Aceh province on November 7, 2022. (Photo by Chaideer Mahyuddin/AFP Photo) 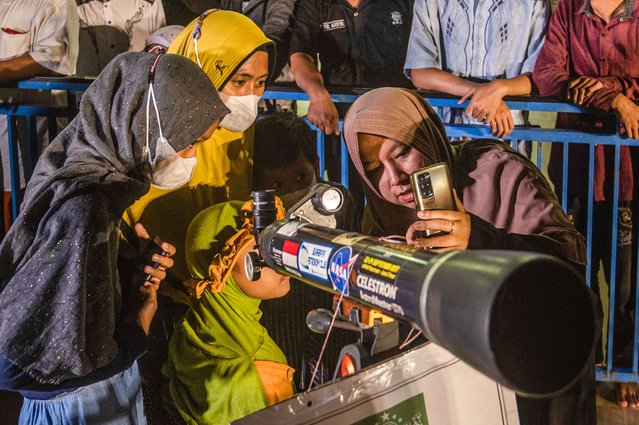 Indonesians use a telescope to watch the lunar eclipse in Surabaya on November 8, 2022. (Photo by Juni Kriswanto/AFP Phoot) 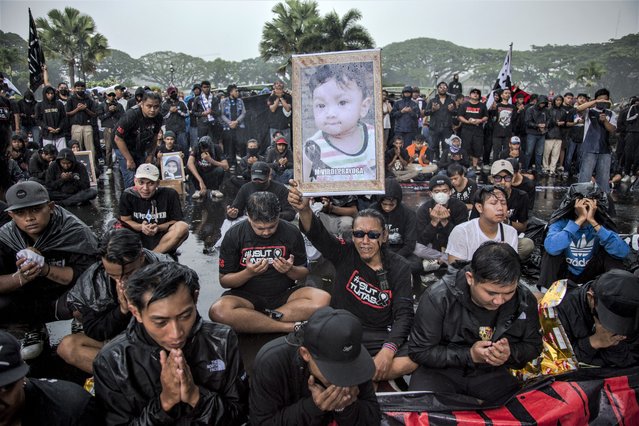 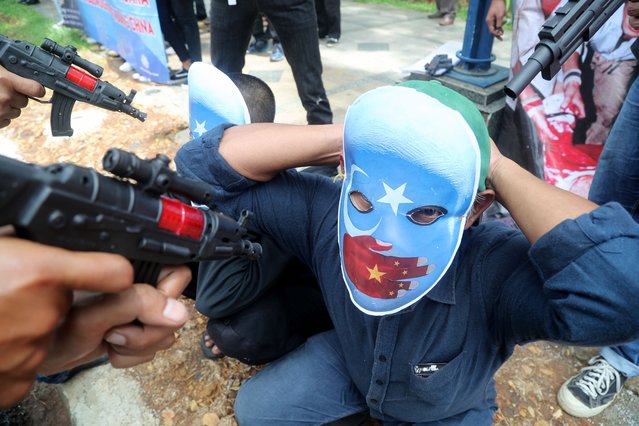