Fact A Look at Life in Indonesia, Part 2/2 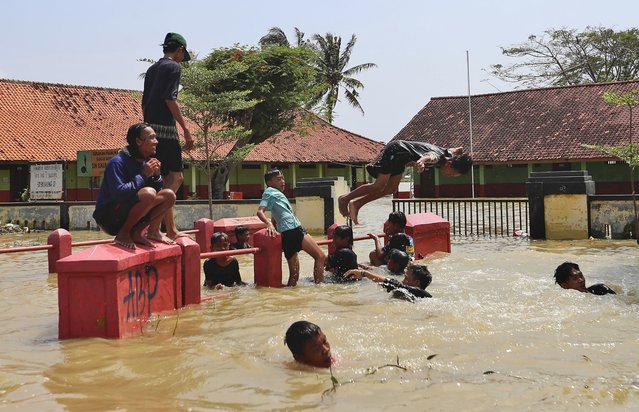 Indonesian youths play in the water during a flood in Bekasi, Indonesia, Monday, February 22, 2021. Thousands of residents are being evacuated on the outskirts of Indonesia's capital amid flooding after the Citarum River embankment broke, officials said Monday. (Photo by Achmad Ibrahim/AP Photo) 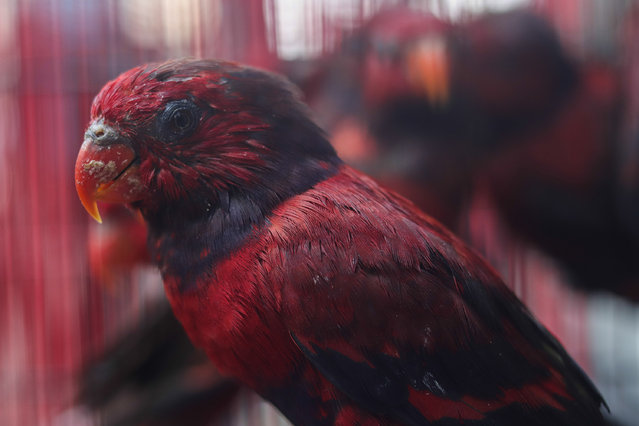 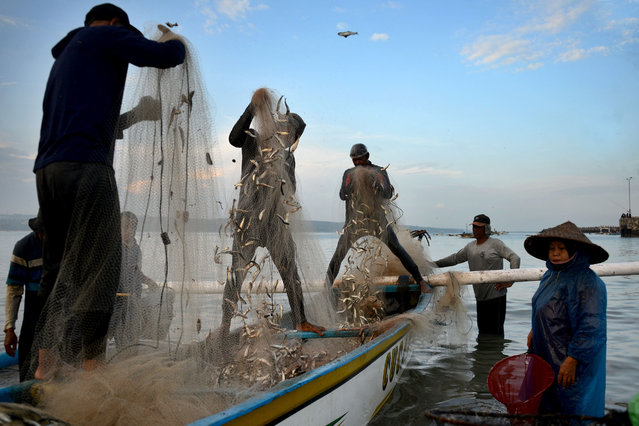 Fishermen check their nets after returning to the Kedonganan beach near Denpasar, on Indonesia resort island of Bali on February 26, 2021. (Photo by Sonny Tumbelaka/AFP Photo) 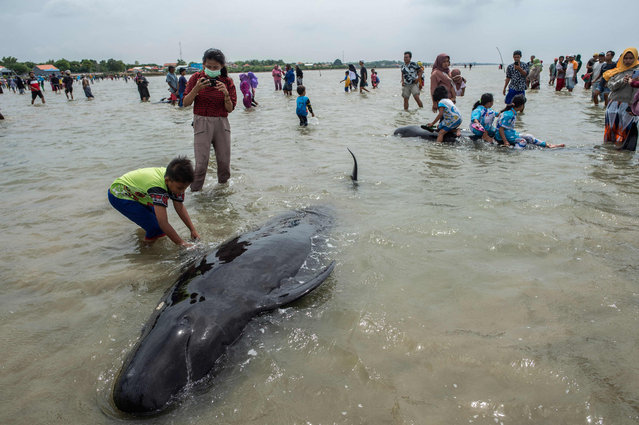 People try to save short-finned pilot whales beached in Bangkalan, Madura island on February 19, 2021, as some 49 pilot whales have died after a mass stranding on the coast of Indonesia's main island of Java that sparked a major rescue operation. (Photo by Juni Kriswanto/AFP Photo) 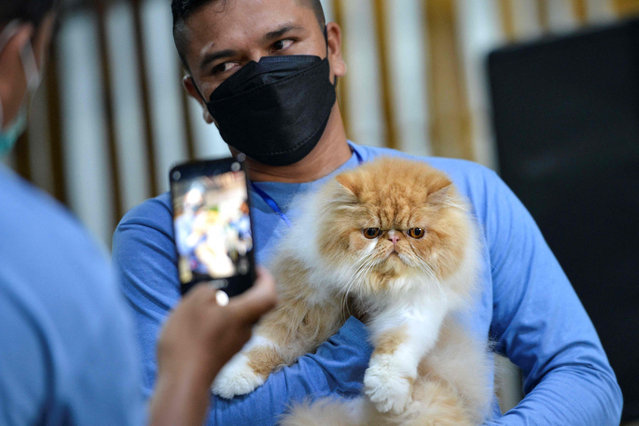 A participant holds his cat during during a cat show in Banda Aceh on February 28, 2021. (Photo by Chaideer Mahyuddin/AFP Photo) 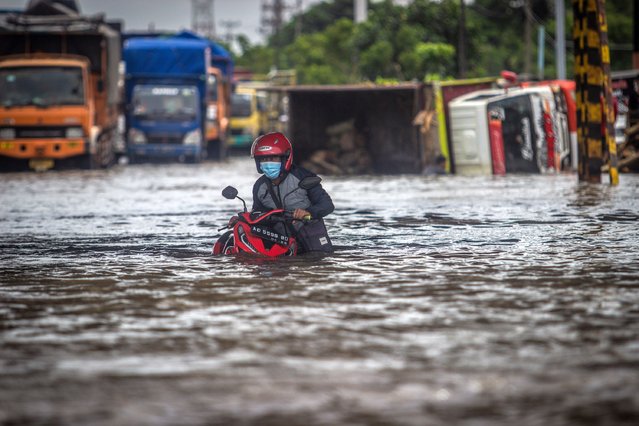 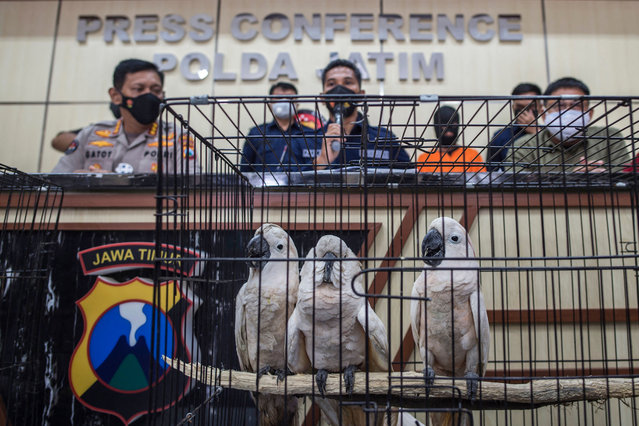 Cockatoos under the custody of Indonesian nature conservation agency officials are seen during a press conference in Surabaya on February 17, 2021, after police arrested two suspected animal smugglers and seized various animals including birds of prey, fifteen cockatoo parrots and eight langurs. (Photo by Juni Kriswanto/AFP Photo) 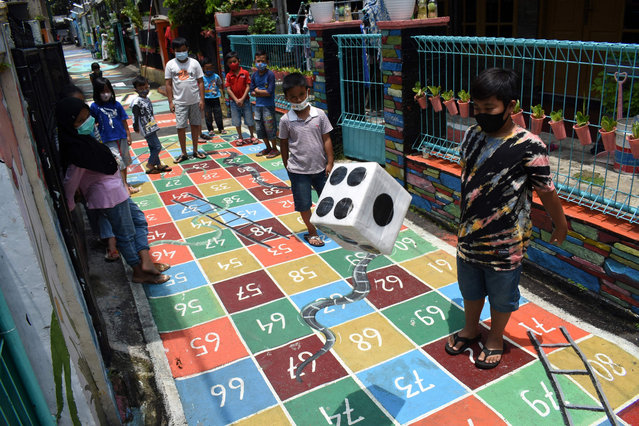 Children gather to play along a path painted with various children’s games at a neighbourhood in Bandung on March 4, 2021. (Photo by Timur Matahari/AFP Photo) 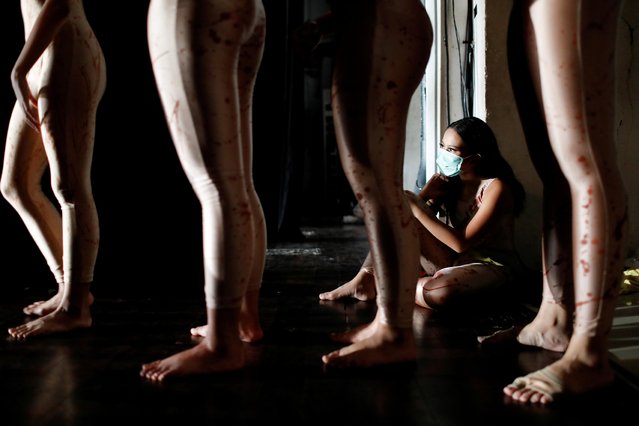 A dancer wearing a protective mask to curb the spread of the coronavirus disease (COVID-19), sits during a virtual dance performance titled “The Story of Man: In Search of A New Ideal” by Namarina Youth Dance, at the Jakarta Art Building, Indonesia, February 21, 2021. (Photo by Willy Kurniawan/Reuters) 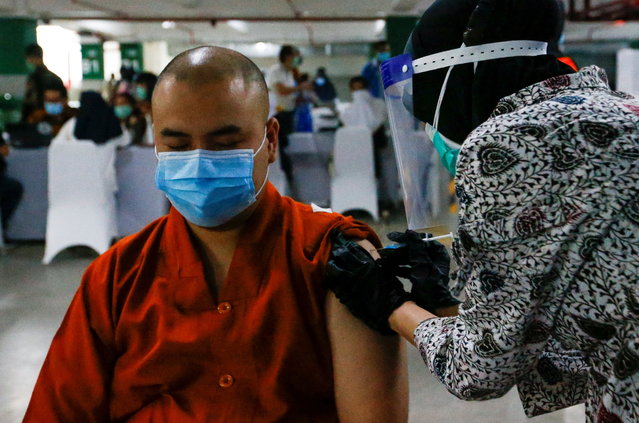 A monk reacts while receiving the first dose of China's Sinovac Biotech vaccine for the coronavirus disease (COVID-19) during the mass vaccination program for clergy at the parking lot of Grand Istiqlal Mosque in Jakarta, Indonesia, February 25, 2021. (Photo by Ajeng Dinar Ulfiana/Reuters) 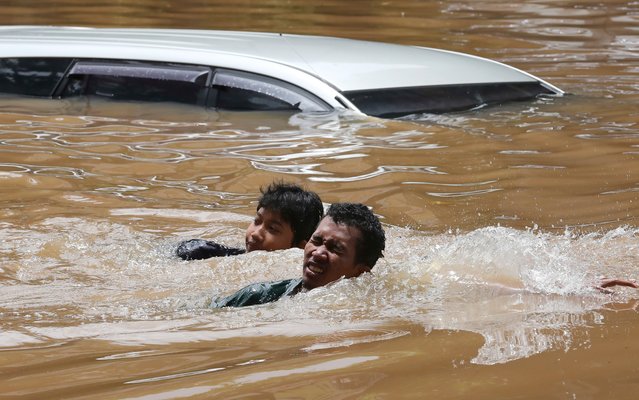 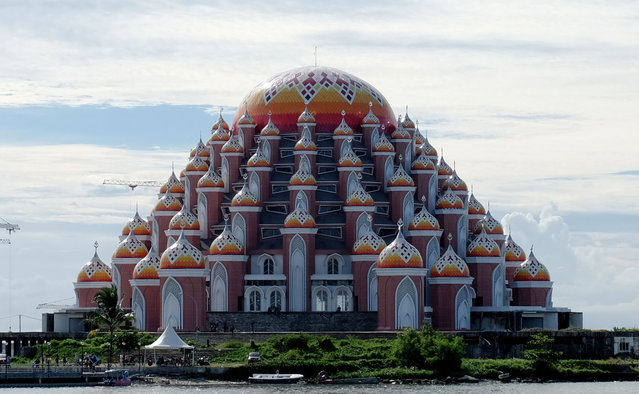 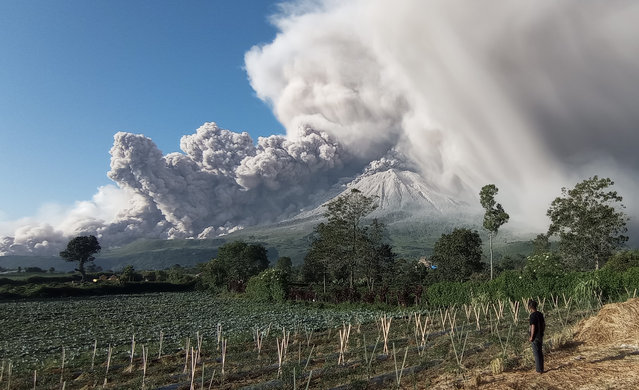 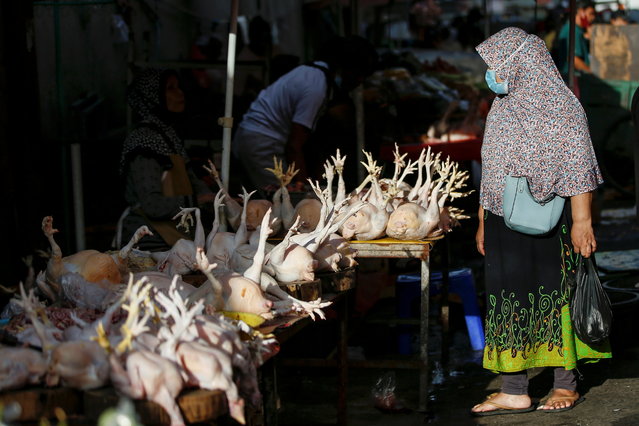 A woman wearing a protective mask to prevent the spread of coronavirus disease (COVID-19) shops for chickens at a traditional market in Jakarta, Indonesia, March 1, 2021. (Photo by Willy Kurniawan/Reuters) 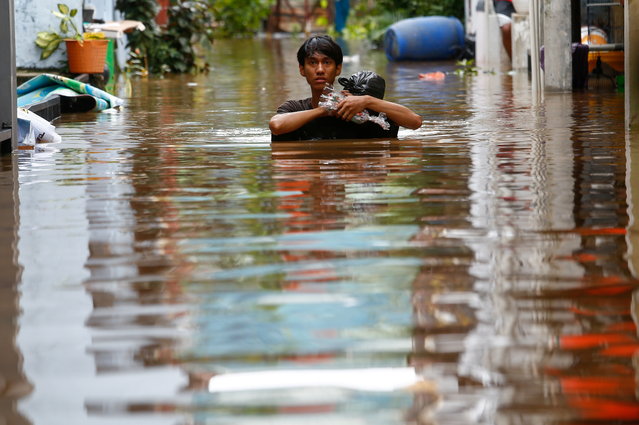 A man carrying his goods walks through the water in an area affected by floods, following heavy rains in Jakarta, Indonesia, February 20, 2021. (Photo by Ajeng Dinar Ulfiana/Reuters) 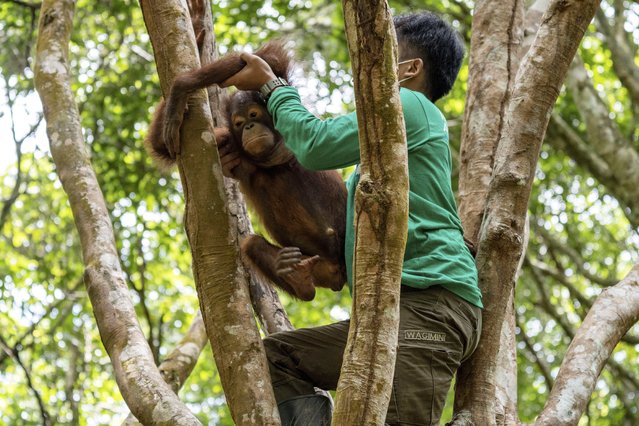 These picture show a rescued orangutan on its first day at “Forest School” on February 25, 2021 learning to climb a tree – after it developed a fear of heights in captivity. Kukur is just five-years-old and was rescued from a hut in West Borneo where he was being kept tied up as an illegal pet. He has now started the rehabilitation process as he learns to climb properly. Carers say life in captivity many apes like Kukur develop a fear of heights. (Photo by IAR Indonesia/Action Press/South West News Service) 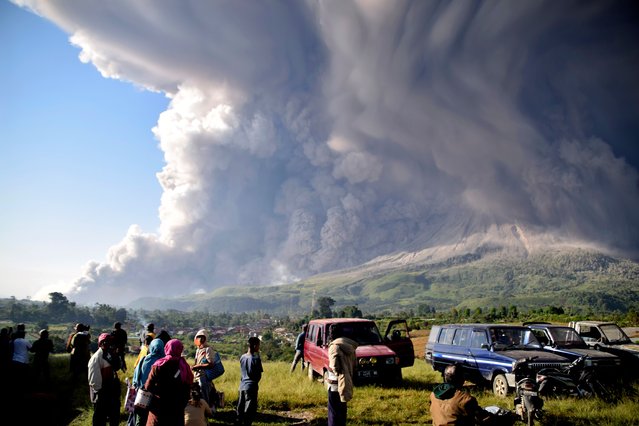 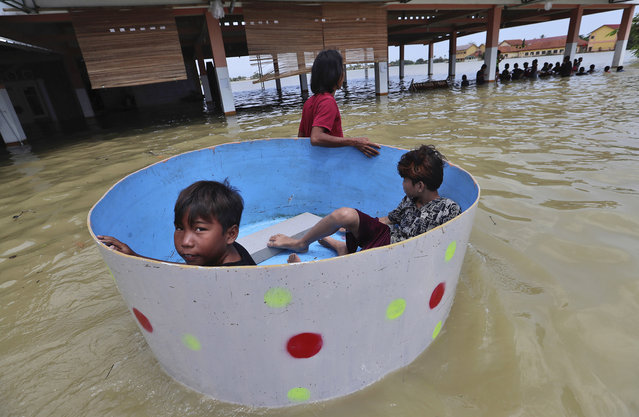 Indonesian boys sit inside a tub during a flood in Bekasi, Indonesia, Monday, February 22, 2021. (Photo by Achmad Ibrahim/AP Photo) 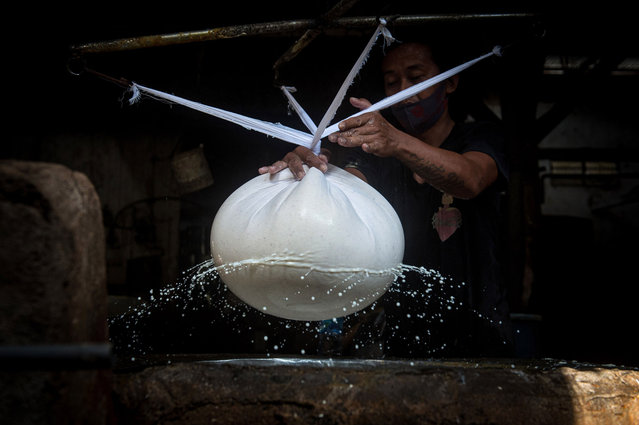 A worker makes tofu at a traditional tofu factory on March 03, 2021 in Surabaya, Indonesia. UD. Sumber Kencana, a traditional tofu factory founded by Go Loe Tjiauw since 1953 in Surabaya is surviving against the high price of imported soybeans amid the Coronavirus pandemic. Based on the Chicago Board of Trade (CBOT), in December 2020 the soybeans world price was recorded at USD $ 12.95 per bushels, an increase of 9% from the previous month which was recorded at USD 11.92 per bushels. In February 2021 it increased in the range of USD $ 13.71 per bushels. The current price of soybeans as of March 01, 2021 is USD $ 13.9125 per bushel. Consequently, increasing the tofu price on the local market is inevitable, because the majority of soybean needed in Indonesia are imports from the United States and Brazil. Indonesia is in second place for the country with the largest soybean consumption in the world after China. Most of the soybeans are used for the production of tofu and tempe. The Indonesia Central Bureau of Statistics noted that Indonesia's soybean imports during the first semester of 2020 reached 1.27 million tons or worth USD $ 510.2 million or around Rp.7.24 trillion (exchange rate Rp.14,200). A total of 1.14 million tonnes was imported from the United States. (Photo by Robertus Pudyanto/Getty Images) 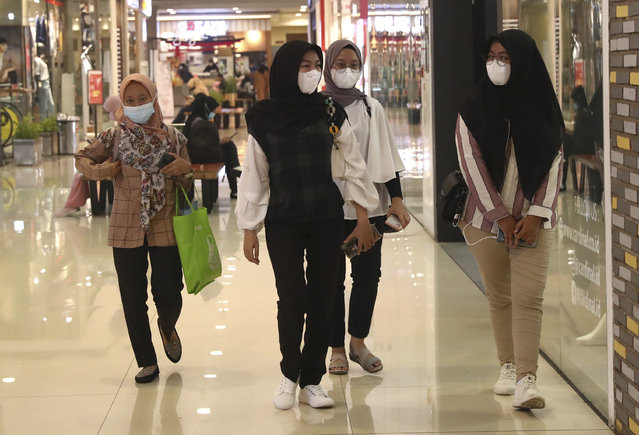