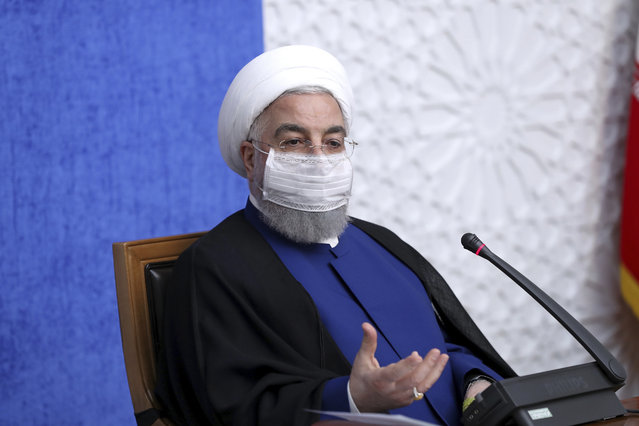 In this photo released by the official website of the office of the Iranian Presidency, President Hassan Rouhani speaks in a meeting in Tehran, Iran, Sunday, November 8, 2020. On Sunday, Rouhani called on President-elect Joe Biden to “compensate for past mistakes” and return the U.S. to Tehran's 2015 nuclear deal with world powers. (Photo by Iranian Presidency Office via AP Photo) 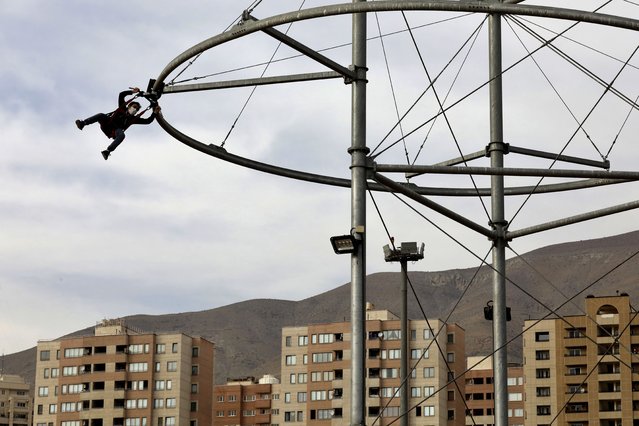 A boy wearing a protective face mask to help prevent the spread of the coronavirus rides a zip line while enjoying his weekend on the shore of Persian Gulf Martyrs' Lake, in western Tehran, Iran, Friday, November 5, 2020. Suffering from the crushing sanctions posed by the U.S. President Donald Trump, Iranians have a little hope that new U.S. president will ease the sanctions. (Photo by Vahid Salemi/AP Photo) 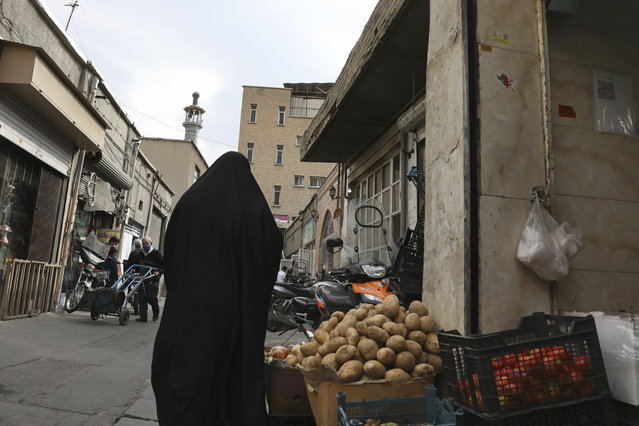 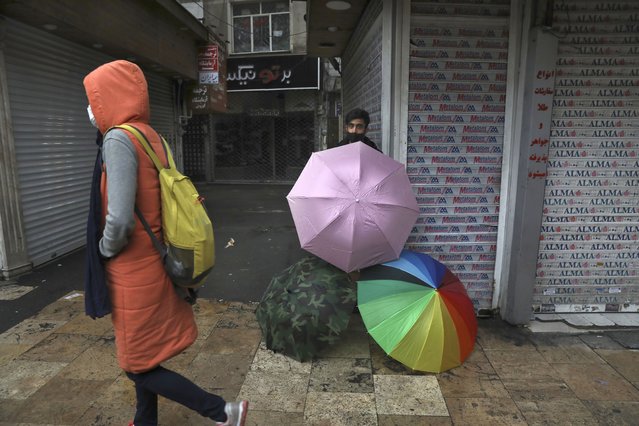 A vendor sells umbrellas outside closed shops in northern Tehran, Iran, Sunday, November 22, 2020. Iran on Saturday shuttered businesses and curtailed travel between its major cities, including the capital of Tehran, as it grapples with the worst outbreak of the coronavirus in the Mideast region. (Photo by Vahid Salemi/AP Photo) 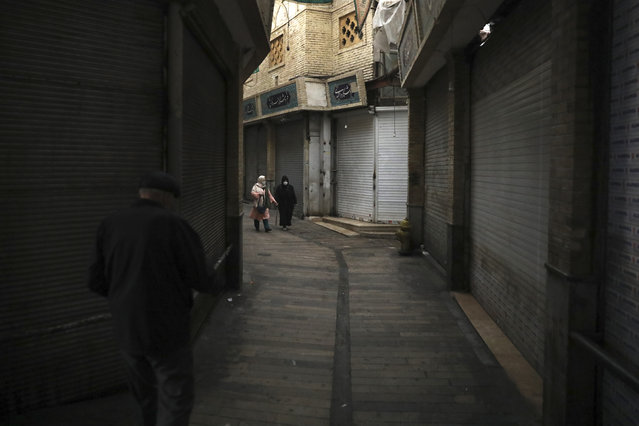 People walk through a closed bazaar in northern Tehran, Iran, Sunday, November 22, 2020. Iran on Saturday shuttered businesses and curtailed travel between its major cities, including the capital of Tehran, as it grapples with the worst outbreak of the coronavirus in the Mideast region. (Photo by Vahid Salemi/AP Photo) 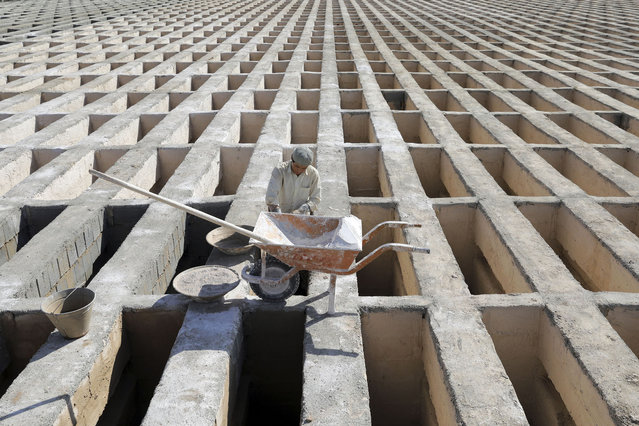 A cemetery worker prepares new graves at the Behesht-e-Zahra cemetery on the outskirts of the Iranian capital, Tehran, Iran, Sunday, November 1, 2020. The cemetery is one of the world’s largest with 1.6 million people buried on its grounds, which stretch across more than 5 square kilometers, but it is struggling to keep up with the coronavirus pandemic ravaging the country. (Photo by Ebrahim Noroozi/AP Photo) 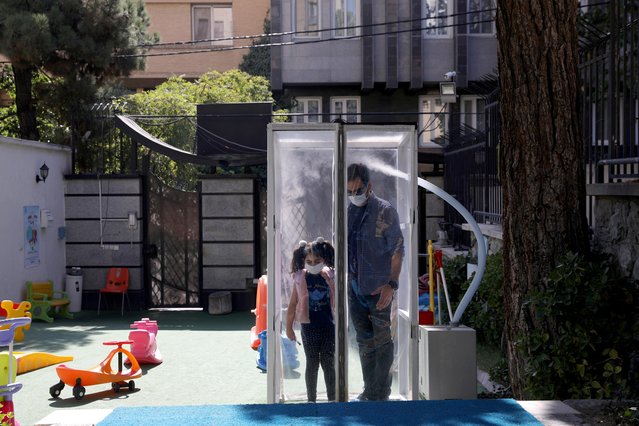 An Iranian man and his daughter get disinfected before they enter the kindergarten, in Tehran, Iran, October 19, 2020. (Photo by Majid Asgaripour/WANA) 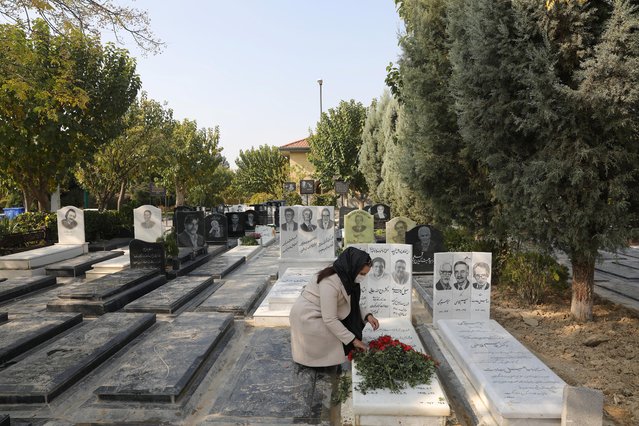 Ayat Hosseini, an Iranian woman who lost her husband, Soheil due to coronavirus, puts flowers on his grave at a cemetery in south of Tehran, Iran on November 18, 2020. (Photo by Majid Asgaripour/WANA (West Asia News Agency) via Reuters) 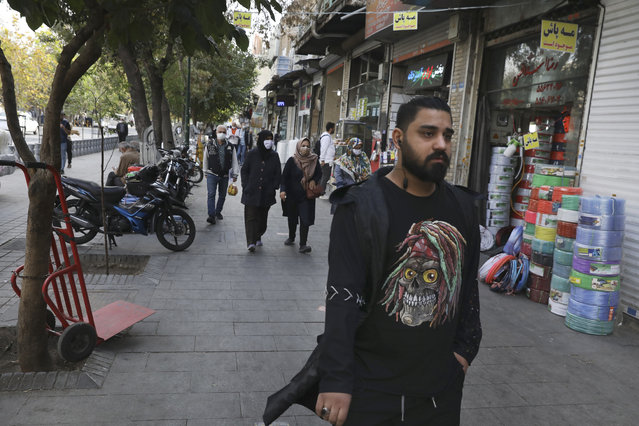 People walk around Tehran's Grand Bazaar, Iran, Sunday, November 8, 2020. Iranians welcomed the election of Joe Biden as the 46th President of the United States as a beacon of hope for the future of their country already battered by the most severe sanctions in its history. (Photo by Vahid Salemi/AP Photo) 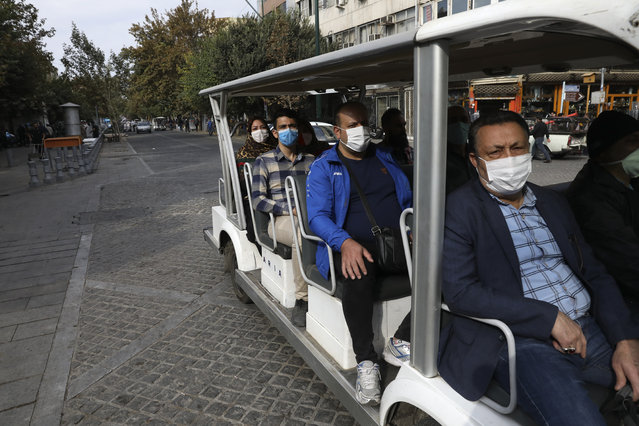 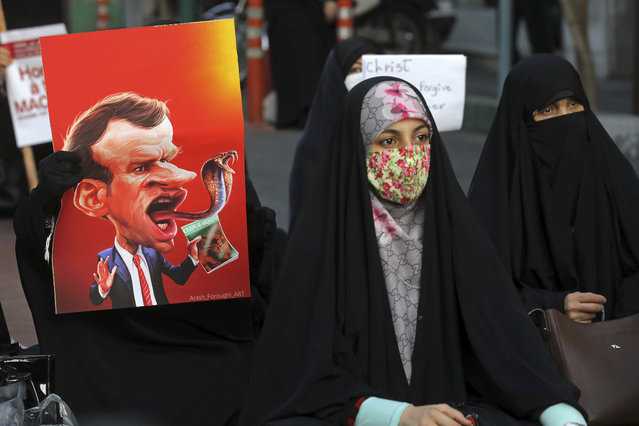 Iranian protesters hold defaced pictures of French President Emmanuel Macron during a protest against Macron and the publishing of caricatures of the Prophet Muhammad they deem blasphemous, in front of French Embassy in Tehran, Iran, Wednesday, October 28, 2020. Macron has vowed his country will not back down from its secular ideals and defense of free speech. (Photo by Ebrahim Noroozi/AP Photo) 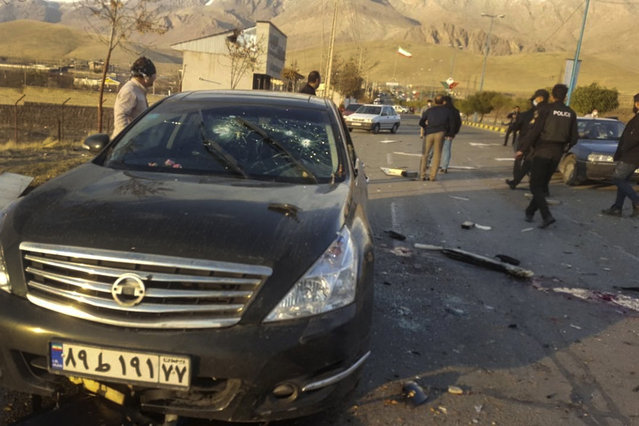 This photo released by the semi-official Fars News Agency shows the scene where Mohsen Fakhrizadeh was killed in Absard, a small city just east of the capital, Tehran, Iran, Friday, November 27, 2020. Fakhrizadeh, an Iranian scientist that Israel alleged led the Islamic Republic's military nuclear program until its disbanding in the early 2000s was “assassinated” Friday, state television said. (Photo by Fars News Agency via AP Photo) 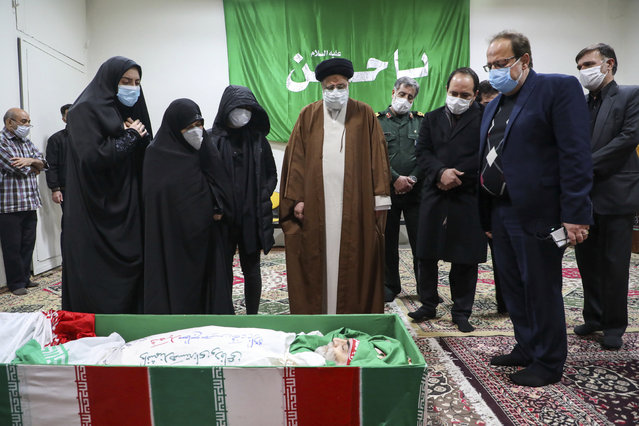 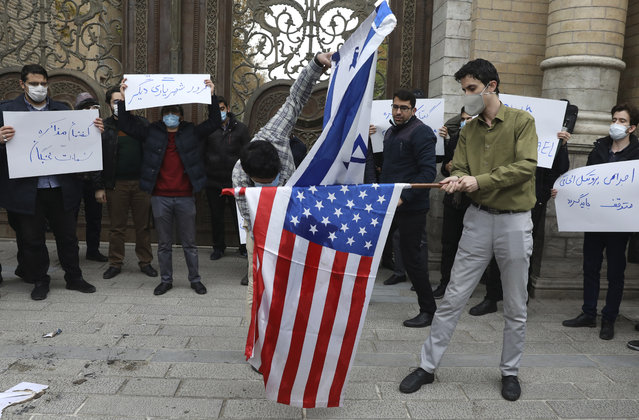 Two protesters burn the representation of the U.S. and Israeli flags as the others hold placards condemning inspections by the UN nuclear agency (IAEA) on Iran's nuclear activities and the country's nuclear talks with world powers during a gathering in front of Iranian Foreign Ministry on Saturday, November 28, 2020 in Tehran. Supreme Leader Ayatollah Ali Khamenei is calling for “definitive punishment” of those behind killing of Mohsen Fakhrizadeh, the scientist linked to Tehran’s disbanded military nuclear program. (Photo by Vahid Salemi/AP Photo) 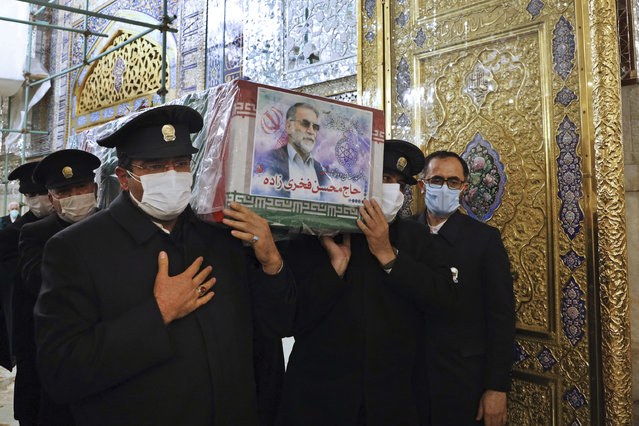 In this picture released by the Iranian Defense Ministry and taken on Saturday, November 28, 2020, caretakers from the Imam Reza holy shrine, carry the flag draped coffin of Mohsen Fakhrizadeh, an Iranian scientist linked to the country's disbanded military nuclear program, who was killed on Friday, during a funeral ceremony in the northeastern city of Mashhad, Iran. An opinion piece published by a hard-line Iranian newspaper has suggested that Iran must attack the Israeli port city of Haifa if Israel carried out the killing of a scientist. (Photo by Iranian Defense Ministry via AP Photo) 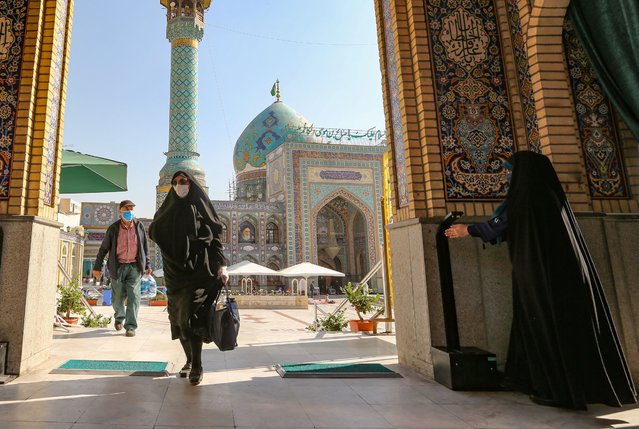 Mask-clad Iranians visit the Imamzadeh Saleh mosque in Tajrish square the capital Tehran on November 1, 2020, amid the novel coronavirus pandemic crisis. Iran yesterday announced the expansion beyond Tehran of measures against Covid-19, amid growing calls for a full lockdown after the country posted a string of record highs in deaths and infections. (Photo by Atta Kenare/AFP Photo) 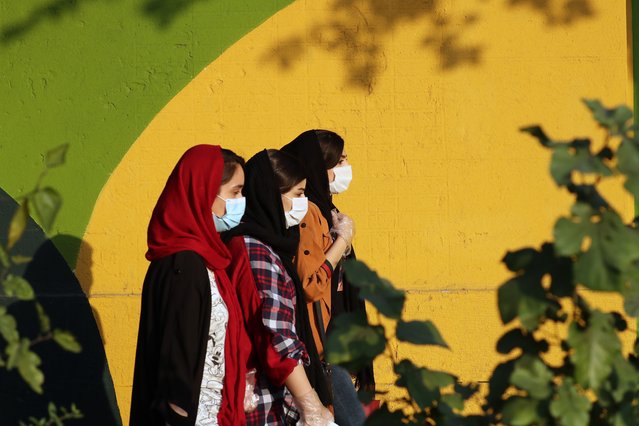 Iranian girls wearing face masks walk in Tehran, Iran, 02 November 2020. According to the Iranian Health ministry, Iran reported its highest daily COVID-19 death toll and infections by announcing 440 deaths and 8,289 new infections in past 24 hours in what appears to be a third wave of COVID-19 outbreak. (Photo by Abedin Taherkenareh/EPA/EFE) 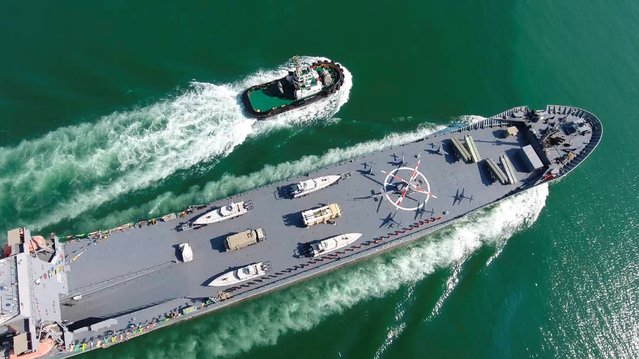 This handout photo provided by Iran's Revolutionary Guard Corps (IRGC) official website via SEPAH News on November 19, 2020, shows a warship named after slain Naval commander Abdollah Roudaki, sailing through the waters in the Gulf during it's inauguration. (Photo by AFP Photo/Stringer) 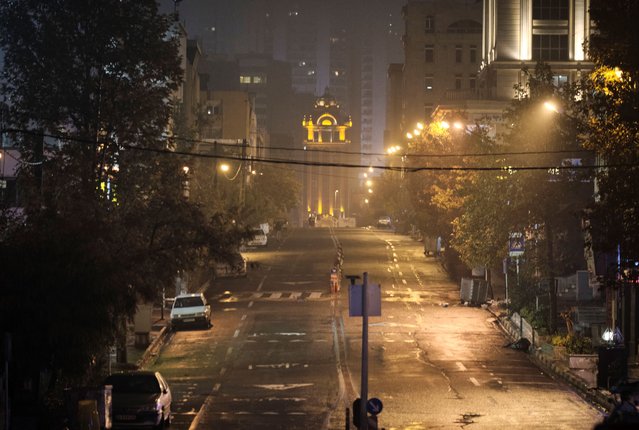 A view of a street in northern Tehran at night which is empty of vehicles as the Capital city is in lockdown for the second time since the new coronavirus disease (COVID-19) officially announced by the Government in February 2020, November 22, 2020. As the third wave of the COVID-19 outbreak kill more Iranian people, Iran consider a two-week total lockdown in Tehran and about 149 other cities from November 21st. (Photo by Morteza Nikoubazl/NurPhoto via Getty Images)
Edit Del
02 Dec 2020 00:03:00, post received 0 comments
Publication archive:
←   →
Popular tags:
All tags
Last searches: