People use their phones to film during a ceremony celebrating Noruz (Nowruz), the Persian New Year, at the Iran Mall shopping centre in Iran's capital Tehran, on March 20, 2022. (Photo by AFP Photo/Stringer) 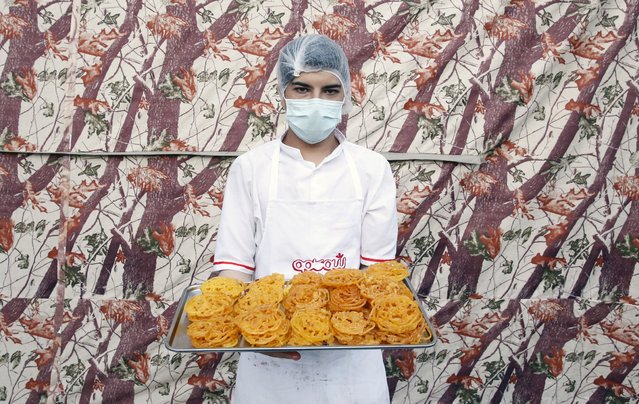 An Iranian worker holds a tray of “Zoolbia” which is a special sweet traditionally served for Ramdan, in a kitchen of a sweets shop in Tehran, Iran, 04 April 2022. “Zoolbia and Bamieh” is the main sweets for the Iftar time for the Iranians. Muslims around the world celebrate the holy month of Ramadan by praying during the night time and abstaining from eating, drinking, and sexual acts during the period between sunrise and sunset. Ramadan is the ninth month in the Islamic calendar and it is believed that the revelation of the first verse in the Koran was during its last 10 nights. (Photo by Abedin Taherkenareh/EPA/EFE) People cross a busy street at the Grand Bazaar of Tehran, Iran, Saturday, April 16, 2022. Russia’s war on Ukraine has exposed just how much Iran has tilted toward Moscow in recent years. Among ordinary Iranians, there is a great deal of sympathy for Ukraine On the streets of Tehran recently, 12 people told The Associated Press that they supported Ukraine, while three reiterated Iran’s official stance and two supported Russia. (Photo by Vahid Salemi/AP Photo) 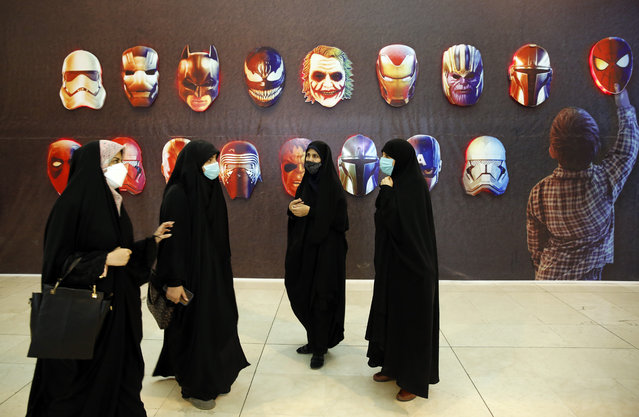 Women stand next to illustrations of comics' superheroes and villains symbolizing the western propaganda, during the Koran exhibition at Mosalah mosque in Tehran, Iran, 17 April 2022. The exhibition runs until 29 April. (Photo by Abedin Taherkenareh/EPA/EFE) 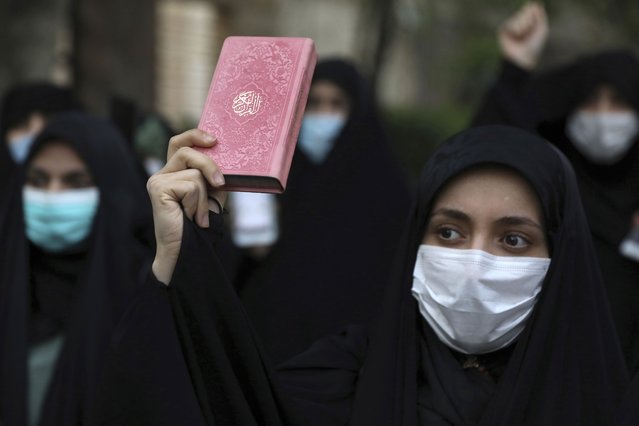 A protester holds a copy of the Quran, the Muslims holy book, during a demonstration to condemn planned Quran burnings by a right-wing group in Sweden, in front of the Swedish Embassy in Tehran, Iran, Monday, April 18, 2022. Sweden has seen unrest, scuffles and violence since Thursday, triggered by Danish far-right politician Rasmus Paludan's meetings and planned Quran burnings across the country. (Photo by Vahid Salemi/AP Photo) 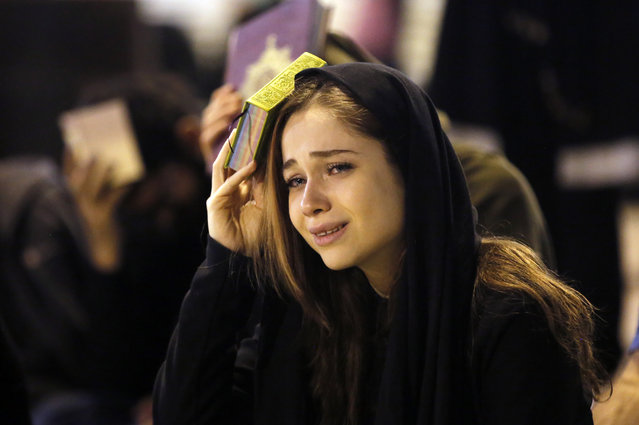 An Iranian Shiite Muslims woman prays as she places the Koran, Islam's holy book, on their heads during a religious ceremony during the holy fasting month of Ramadan, at the Mosalah mosque in Tehran, Iran, early morning 21 April 2022. Laylat al-Qadr (Arabic for Night of Destiny) is believed to be the night when the first verse of Islam's holy book, the Koran, was revealed to Prophet Muhammad, the exact date is not known but it is believed to be on an odd night of the last 10 nights of the holy month of Ramadan. (Photo by Abedin Taherkenareh/EPA/EFE) 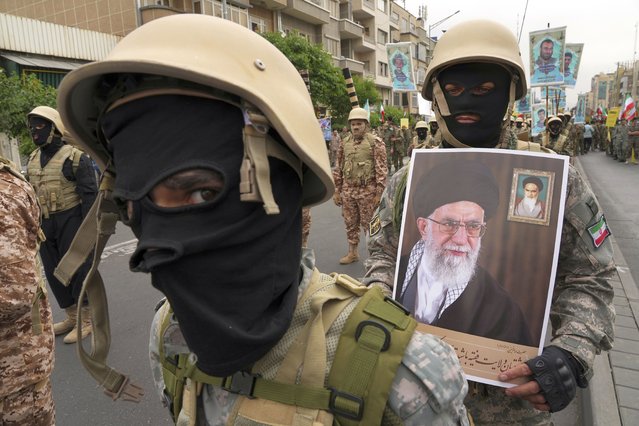 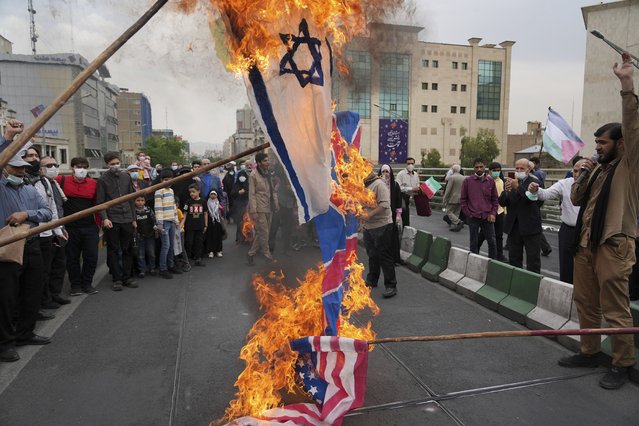 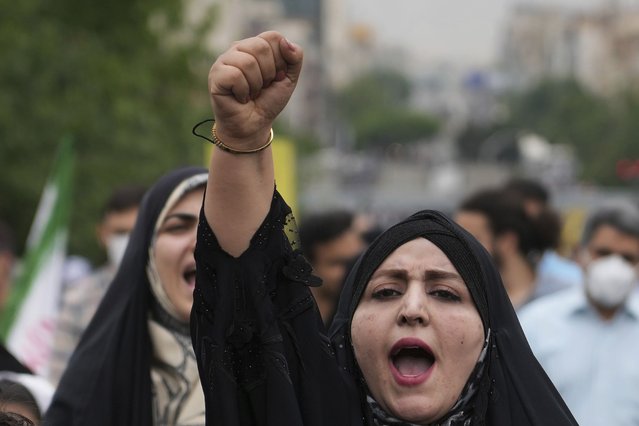 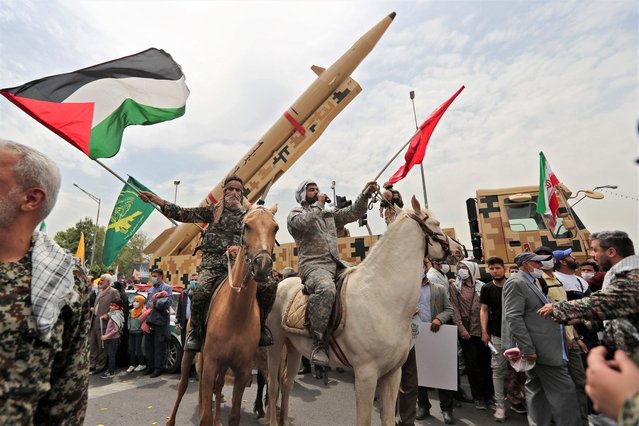 Iranian military men march next to the Kheibar missiles and wave the Palestinian flag during a rally marking al-Quds (Jerusalem) day in Tehran, on April 29, 2022. An initiative started by the late Iranian revolutionary leader Ayatollah Ruhollah Khomeini, Quds Day is held annually on the last Friday of the Muslim fasting month of Ramadan. (Photo by AFP Photo/Stringer) 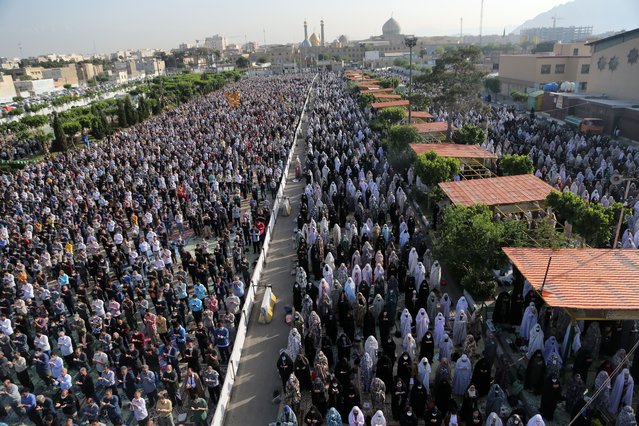 Shiites gather to perform Eid al-Fitr prayer at the Shah Abdol'Azim Shrine in Tehran, Iran on May 03, 2022. (Photo by Fatemeh Bahrami/Anadolu Agency via Getty Images) 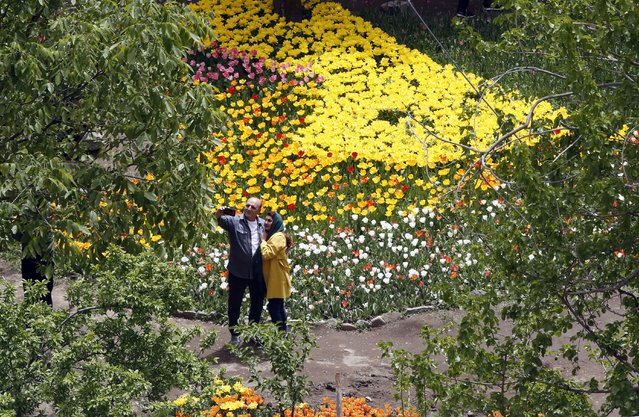 An Iranians couple visits the Asara tulip flower exhibition in the city of Asara, Alborz province, Iran, 05 May 2022. More than two million tulips from 43 variants are reportedly exhibited during the festival in a flower garden in city of Asara, which was opened on 03 May 2022. (Photo by Abedin Taherkenareh/EPA/EFE) 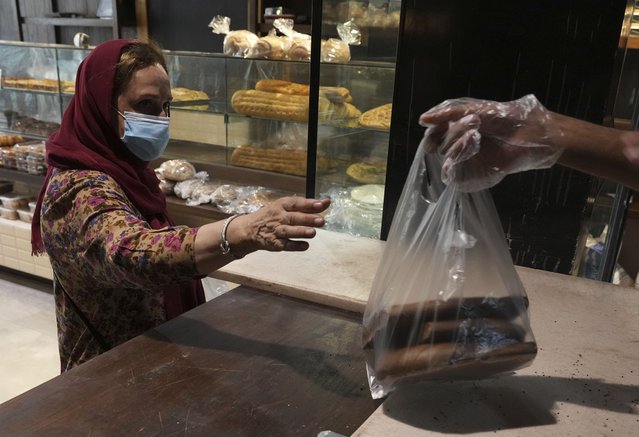 A customer buys bread in a bakery in Tehran, Iran, Wednesday, May 11, 2022. Iran abruptly raised prices as much as 300% for a variety of staples such as cooking oil, chicken, eggs and milk on Thursday. (Photo by Vahid Salemi/AP Photo) 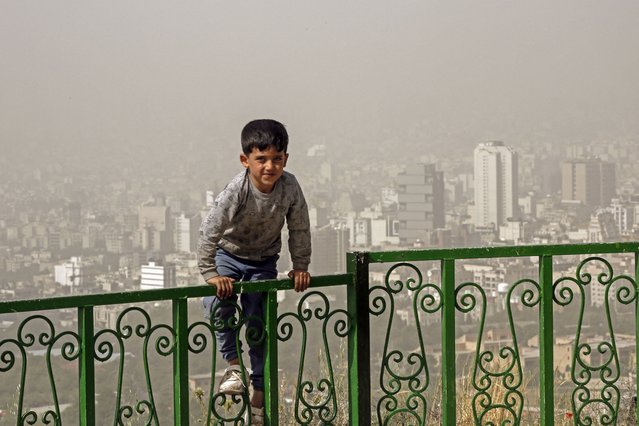 A boy plays outside during a heavy sandstorm in the north of Iran's capital Tehran on May 17, 2022. Government offices, as well as schools and universities were announced closed in many provinces in Iran due to “unhealthy weather” conditions and sandstorms, state media reported. (Photo by AFP Photo/Stringer) 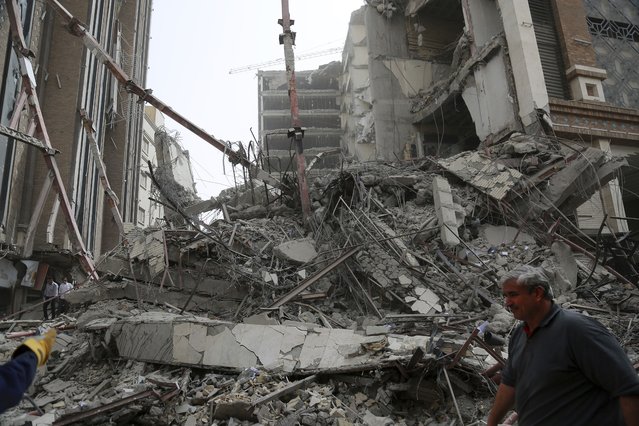 In this photo provided by Fars News Agency, rubble remains from a 10-story commercial building under construction that collapsed killing several people in the southwestern city of Abadan, Iran, Monday, May 23, 2022. There are fears the casualty toll could be much higher as more than 80 people were still believed to be trapped under the rubble after the Metropol building toppled, burying shops and even some cars in the surrounding streets, state TV reported. (Photo by Mohammad Amin Ansari, Fars News Agency via AP Photo) 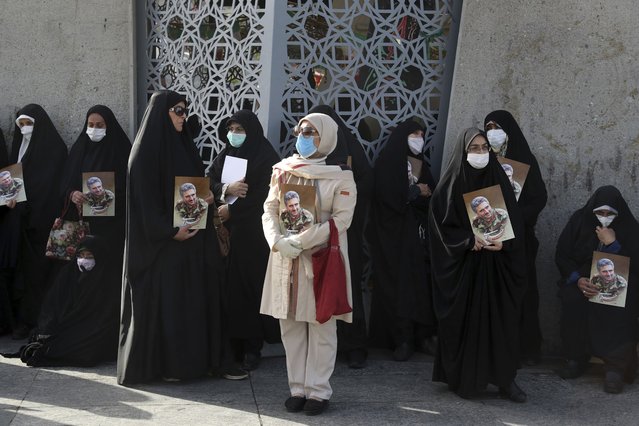 Mourners hold posters of Iran's Revolutionary Guard Col. Hassan Sayyad Khodaei who was killed on Sunday, in his funeral ceremony in Tehran, Iran, Tuesday, May 24, 2022. Iran's hard-line President Ebrahim Raisi vowed revenge on Monday over the killing of Sayyad Khodaei who was shot at his car by two assailants outside his home in Tehran, a still-mysterious attack on the country's powerful paramilitary force. (Photo by Vahid Salemi/AP Photo) 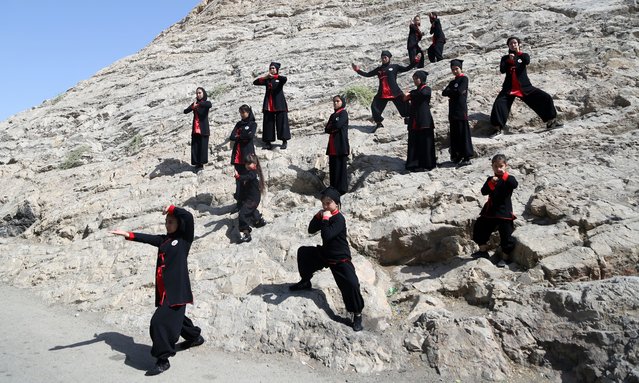 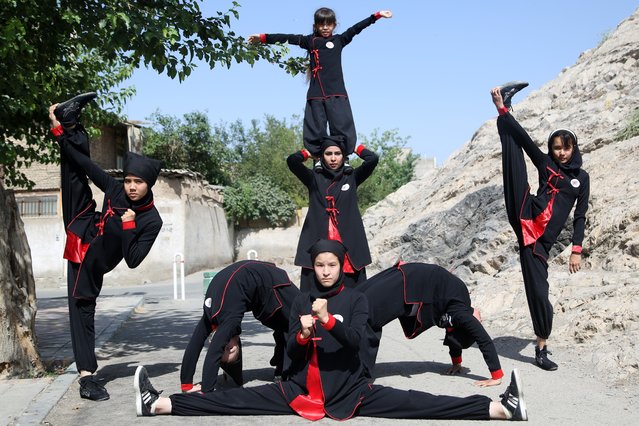 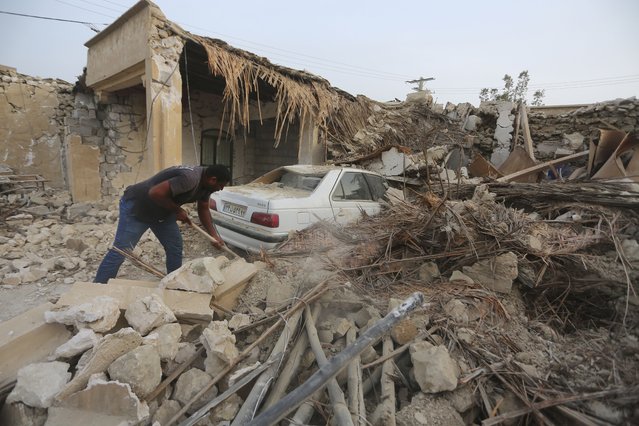 A man cleans up the rubble after an earthquake at Sayeh Khosh village in Hormozgan province, some 620 miles (1,000 kilometers) south of the capital, Tehran, Iran, Saturday, July 2, 2022. (Photo by Abdolhossein Rezvani/AP Photo) 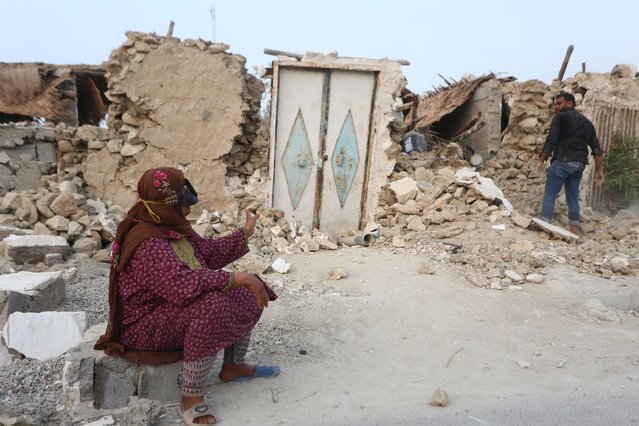 A woman (L) sits outside the rubble of her house in the aftermath of a powerful earthquake, in Sayeh Khosh village, Hormozgan province, southern Iran, 02 July 2022. At least five people were killed when a 6.1-magnitude earthquake hit southern Iran in the early hours of 02 July. The main quake was followed by two powerful aftershocks of up to 6.3 magnitude, the Iranian Red Crescent Society said. (Photo by Abdol Hossein Rezvani/EPA/EFE)
Edit Del
07 Jul 2022 04:12:00, post received 0 comments
Publication archive:
←   →
Popular tags:
All tags
Last searches: