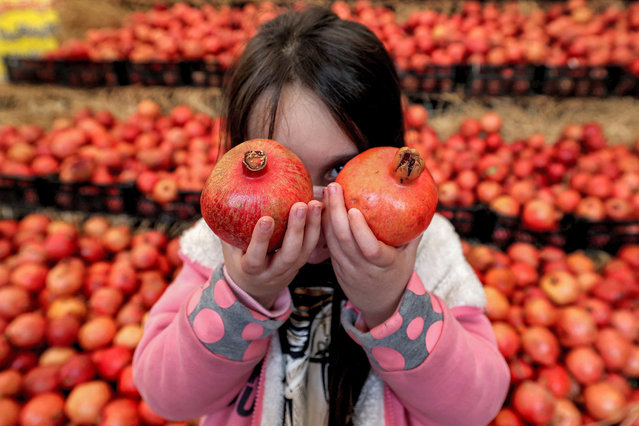 A girl holds up two pomegranates before her face during the Pomegranate Festival in Iran's capital Tehran on November 14, 2021. The festival is scheduled to run until November 22. (Photo by Atta Kenare/AFP Photo) 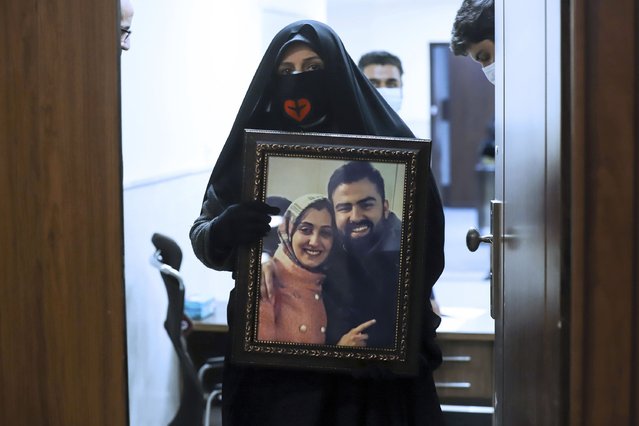 This photo released by Mizan News Agency, shows a woman holding portraits of her loved ones who were killed in the 2020 downing of a Ukrainian plane that killed 176 people, during a hearing in an Iranian military courtroom, Sunday, November 21, 2021, in Tehran, Iran. The banner at rear next to the portrait of the late Iranian revolutionary founder Ayatollah Khomeini reads in Persian: “The trial of Ukrainian flight PS752 accident”. (Photo by Koosha Mahshid Falahi/Mizan News Agency via AP Photo) 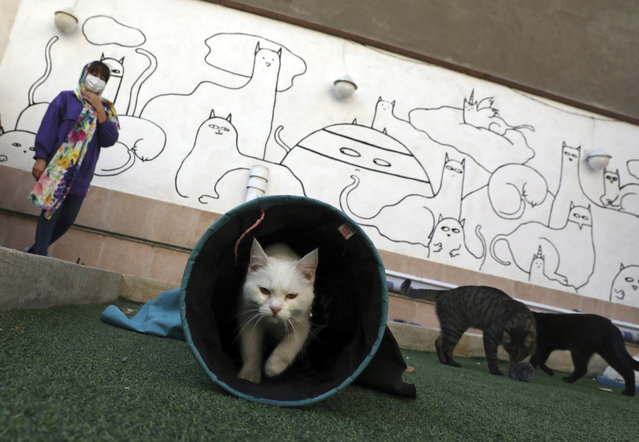 Cats play on the rooftop of the Persian Cat Museum in Tehran, Iran, Sunday, December 5, 2021. Founded in an old house in 2020, the Cat Museum started out as a dual-purpose cafe and cat exhibition. The breeds showcased include a wide range of domestic short-haired, domestic long-haired, Persian, Scottish, British, Siamese and the Russian Blue, all of them donated or rescued street cats and kittens who go through regular veterinary inspection and vaccinations. (Photo by Vahid Salemi/AP Photo) 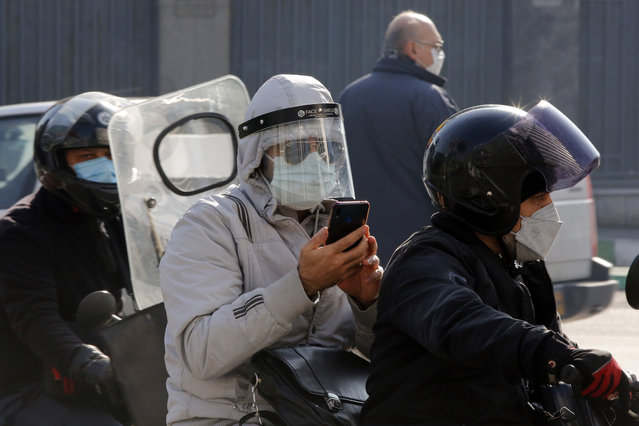 Commuters wear face masks in Tehran, Iran, 20 December 2021. The Iranian Health Ministry announced the detection of the first case of the coronavirus Omicron variant in the country, urging people to strictly abide to COVID-19 health protocols. (Photo by Abedin Taherkenareh/EPA/EFE) 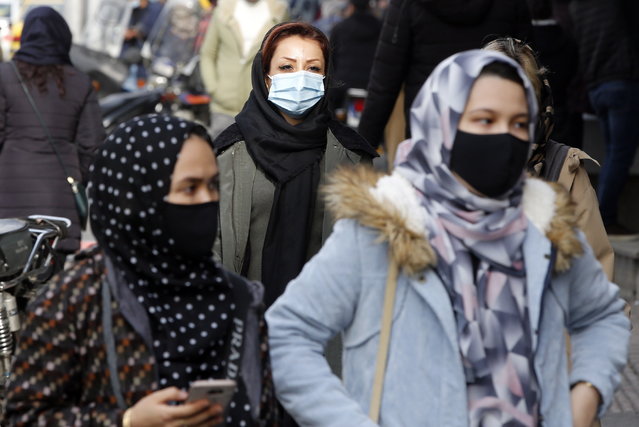 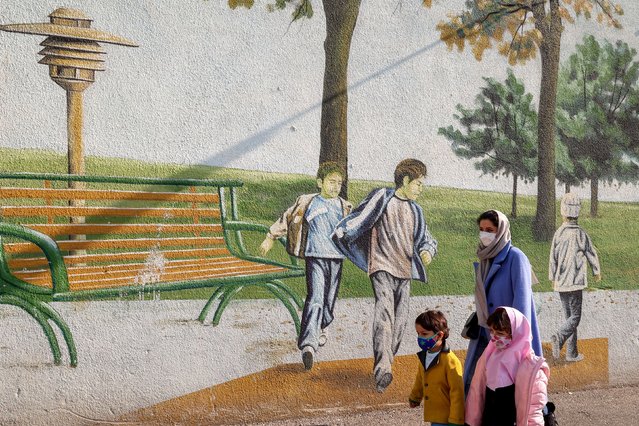 A woman and children walk past a mural at a park in the Iranian capital Tehran on December 29, 2021. Iran said earlier this week that nuclear talks in Vienna should focus on lifting sanctions on the Islamic republic and “guarantee” the US will return to the fold. Negotiations to salvage the 2015 Iran nuclear deal resumed in late November, after a five-month hiatus following the election of ultraconservative Iran President Ebrahim Raisi. (Photo by Atta Kenare/AFP Photo) 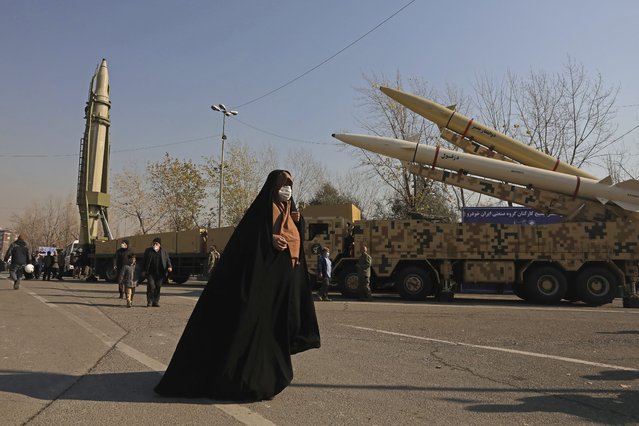 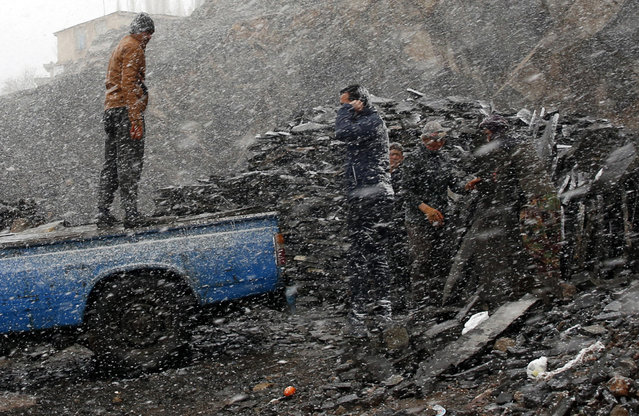 Afghan workers during a snowy day in the city of Meygun, north of Tehran, Iran, 15 January 2022. According to figures last issued by the Iranian Government in October 2020, some 780,000 Afghans were living in Iran as refugees. The figure is currently being updated as thousands of Afghans fled their country in the wake of the Taliban takeover in 2021. (Photo by Abedin Taherkenareh/EPA/EFE) 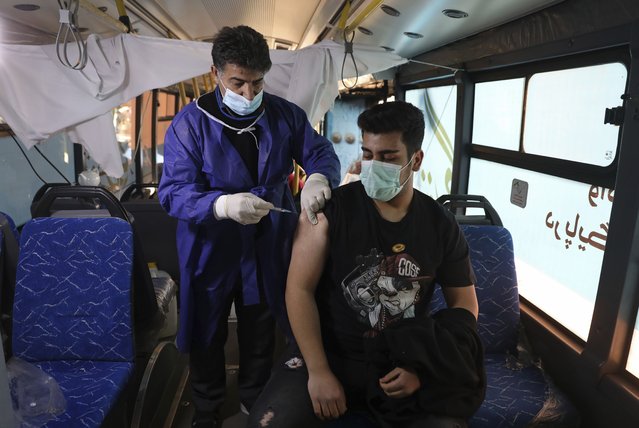 A man receives a COVID-19 vaccine at a mobile vaccine clinic bus at the Grand Bazaar of Tehran, Iran, Saturday, January 22, 2022. After successive virus waves pummeled the country for nearly two years, belated mass vaccination under a new, hard-line president has, for a brief moment, left the stricken nation with a feeling of apparent safety. (Photo by Vahid Salemi/AP Photo) 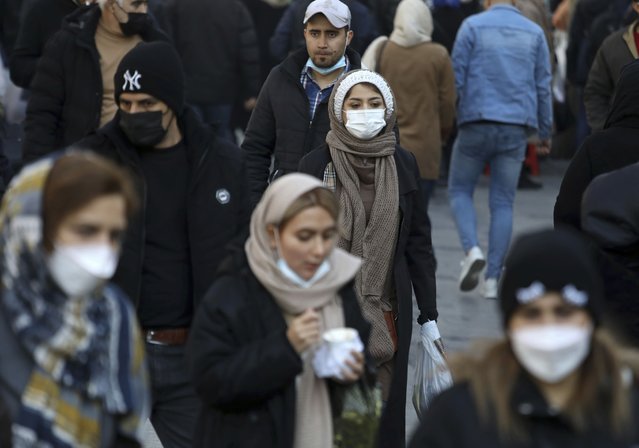 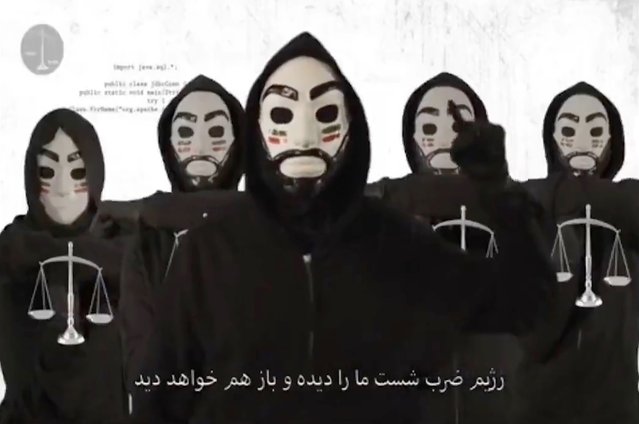 In this screenshot from video, a purported dissident message is seen from an online account calling itself “The Justice of Ali” that reportedly played overtop of an Iranian state television streaming feed on Tuesday, February 1, 2022. A streaming website that features Iranian state television programming has acknowledged suffering technical issues amid reports that dissident hackers played an anti-government message on the platform. The caption at the bottom of the image in Farsi reads: “The regime has tasted our blows and it will taste it again”. (Photo by AP Photo) 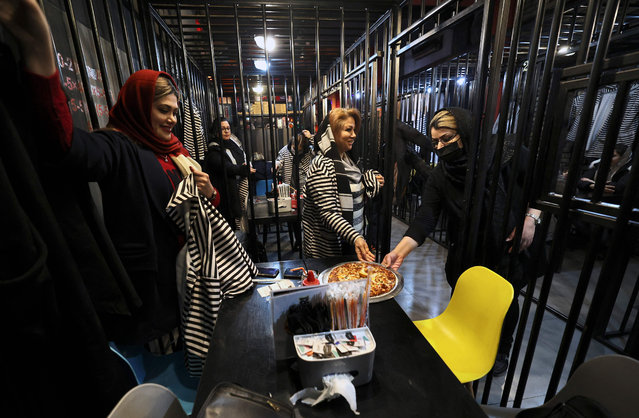 Iranians dine at restaurant-prison “Cell 16” in eastern Tehran on February 4, 2022. Part of the business proceeds is used to free those languishing in Iranian jails for unpaid debts. More than 11,000 Iranians are incarcerated for failing to pay their debts, according to prison officials. The total number of detainees in Iran in 2019 was 240,000, according to the official IRNA news agency. (Photo by Atta Kenare/AFP Photo) 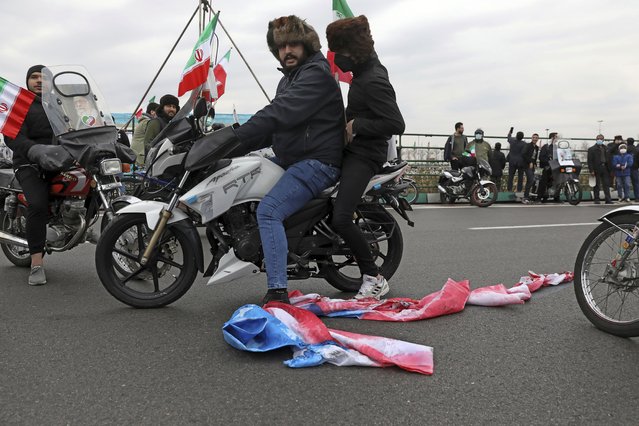 A man on a motorcycle pulls a burnt representation of the U.S. flag on the ground during the annual rally commemorating the anniversary of1979 Islamic Revolution in Tehran, Iran, Friday, February 11, 2022. Thousands of cars and motorbikes paraded in the celebration, although fewer pedestrians were out for a second straight year due to concerns over the coronavirus pandemic. (Photo by Vahid Salemi/AP Photo) 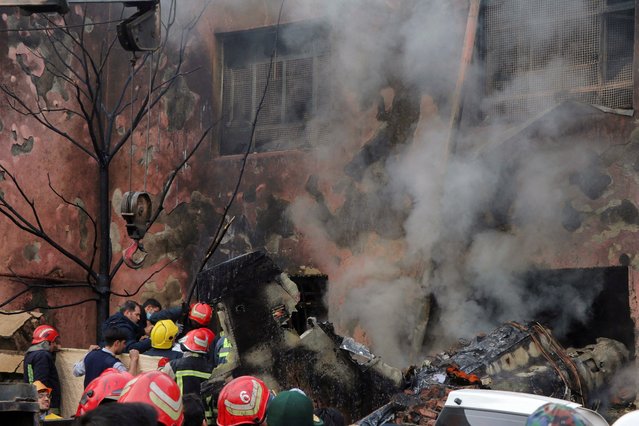 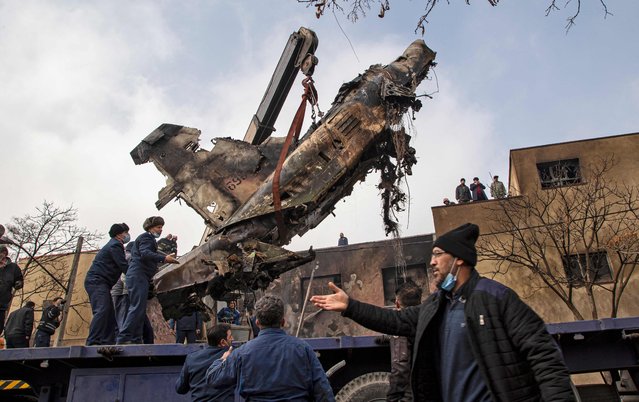 Firefighters put out a blaze at the crash site of a fighter jet which fell in a residential area of Iran's northwestern city of Tabriz on February 21, 2022. (Photo by Maryam Ebrahime/ISNA/AFP Photo) 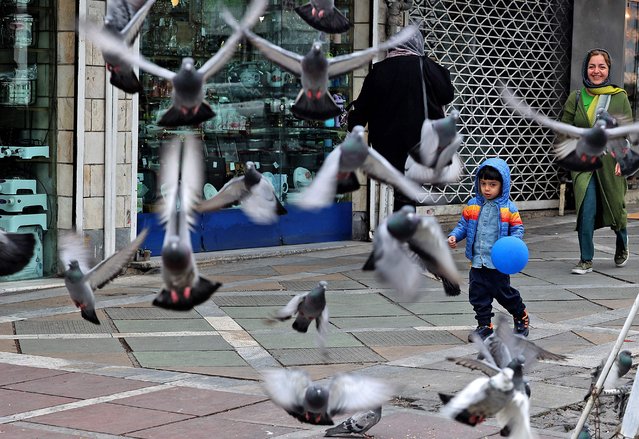 An Iranian boy runs near pigeons in the capital Tehran on March 9, 2022. (Photo by Atta Kenare/AFP Photo) 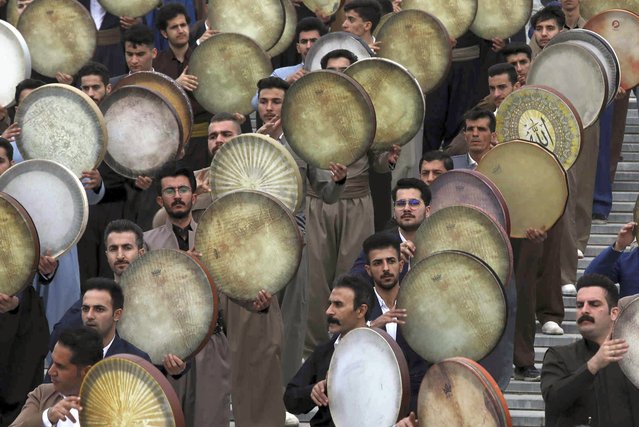 Musicians from the Kurdish western region of Iran play Daf, a hand-held Persian drum, in a ceremony ahead of the Iranian New Year, or Nowruz, at a park in Tehran, Iran, Monday, March 14, 2022. Nowruz dates back to at least 1700 B.C. and in ancient Zoroastrian traditions is the most important and anticipated holiday in Iranian culture and has been widely celebrated through various times and eras across the territories of the old Persian empire, from the Mideast to Central Asia. (Photo by Vahid Salemi/AP Photo) 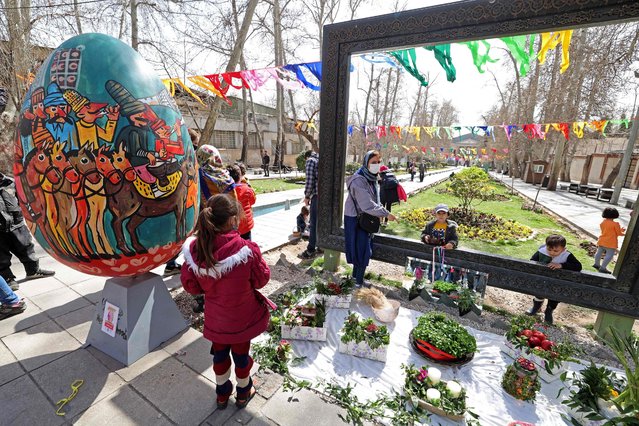 Iranians take photo with a traditional Haftsin, a symbolic arrangement of seven items whose names start with the letter “S”, at a park during an event organised by the municipality of Tehran on March 16, 2022, ahead of the celebration of Noruz, the Persian New Year. Noruz (Nowruz), begins on March 20 and coincides with the first day of spring during which locals revive the ancient Zoroastrian celebration of lighting a fire and dancing around the flame. (Photo by Atta Kenare/AFP Photo) 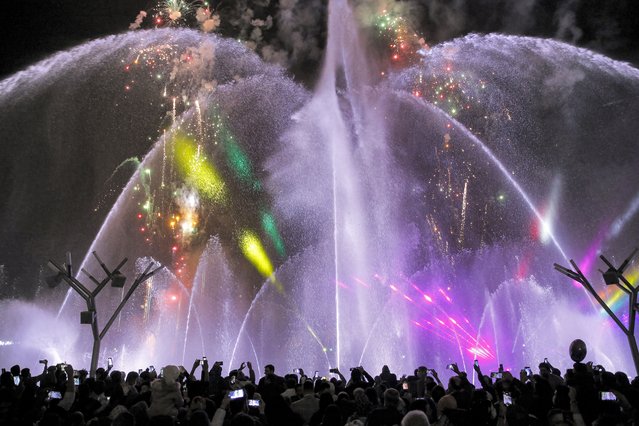 People watch a water show as they attend a ceremony celebrating Noruz (Nowruz), the Persian New Year, at the Iran Mall shopping centre in Iran's capital Tehran, on March 20, 2022. The Persian New Year is an ancient Zoroastrian tradition celebrated by Iranians and Kurds which coincides with the vernal (spring) equinox and is calculated by the solar calendar. (Photo by AFP Photo/Stringer) 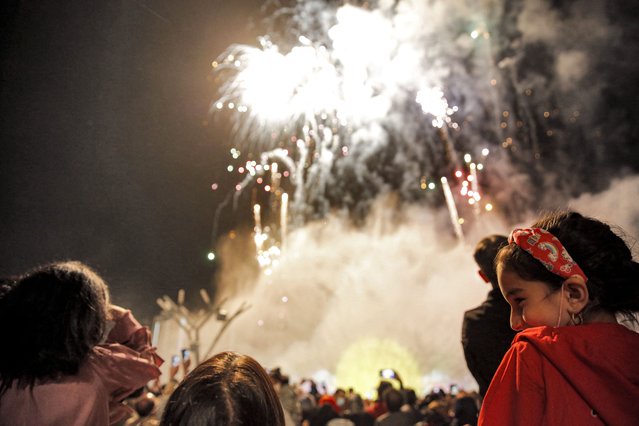