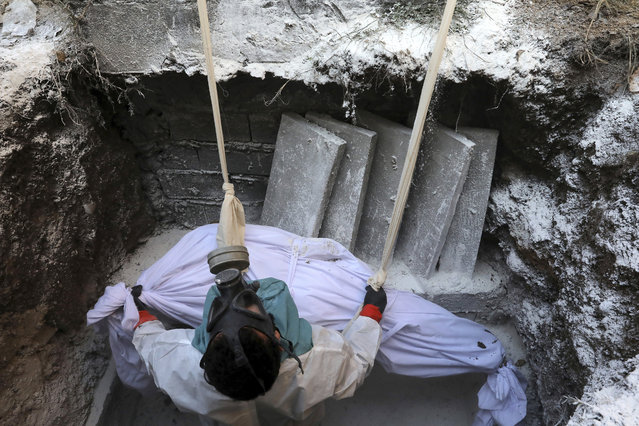 A cleric wearing protective clothing lowers the body of a woman who died from COVID-19 into a grave at a cemetery in the outskirts of the city of Ghaemshahr, in northern Iran, Thursday, December 17, 2020. (Photo by Ebrahim Noroozi/AP Photo) 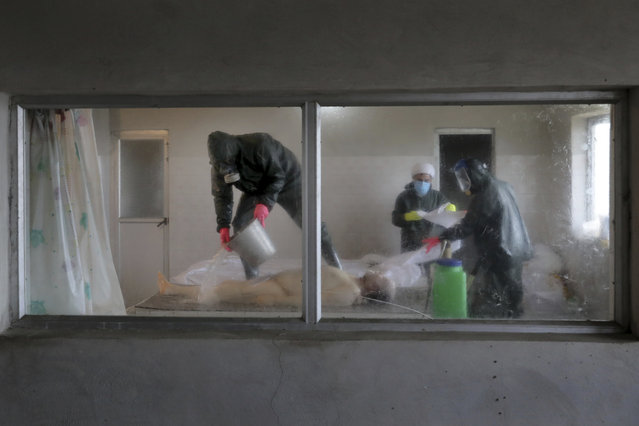 Clerics wearing protective clothing prepare the body of a man who died from COVID-19 for a funeral at a cemetery in the outskirts of the city of Ghaemshahr, in northern Iran, Saturday, December 19, 2020. (Photo by Ebrahim Noroozi/AP Photo) 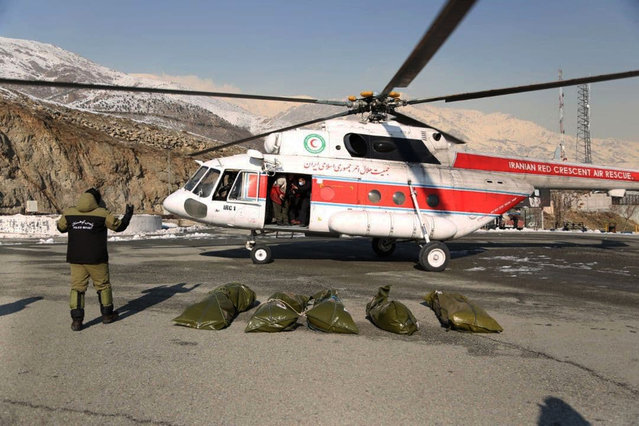 In this photo released by Iran's Red Crescent Society, bags containing bodies of mountaineers who died after avalanches in a mountainous area north of the capital are placed on the ground carried by a rescue helicopter, Iran, Saturday, December 26, 2020. A series of avalanches in Iran killed multiple people on Friday following strong winds and snowfall a day earlier. (Photo by Iran's Red Crescent Society via AP Photo) 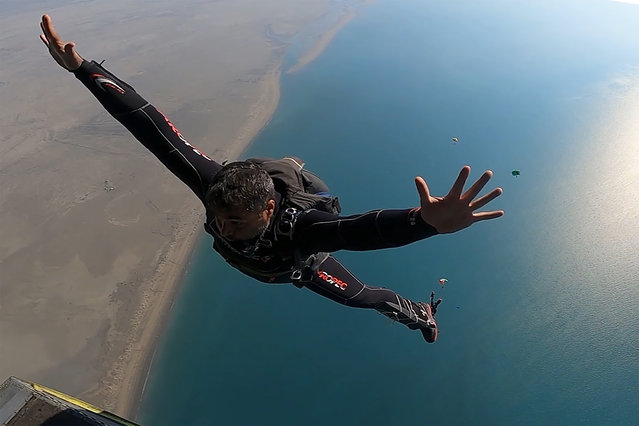 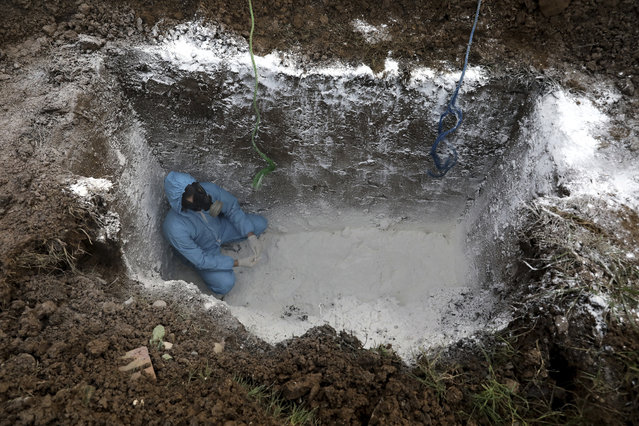 A volunteer wearing protective clothing prepares a grave for a funeral of a person who died from COVID-19 at a cemetery in the outskirts of the city of Ghaemshahr, in northern Iran, Saturday, December 19, 2020. (Photo by Ebrahim Noroozi/AP Photo) 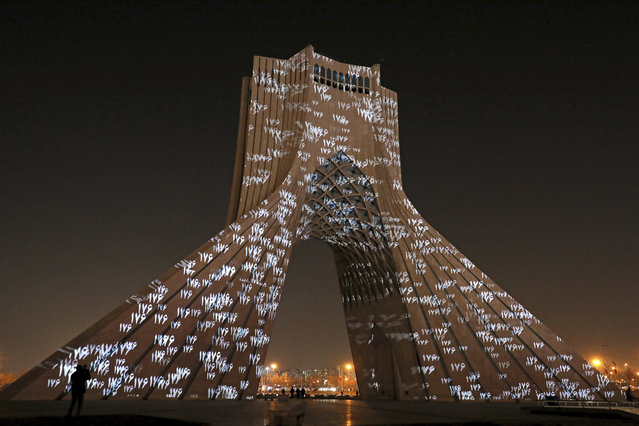 The video mapping is projected on Tehran's iconic Azadi(freedom) tower to commemorate 176 victims of the Ukrainian flight during a municipal memorial marking the first anniversary of the plane crash, in Tehran, Iran, Wednesday, January 6, 2021. (Photo by Ebrahim Noroozi/AP Photo) 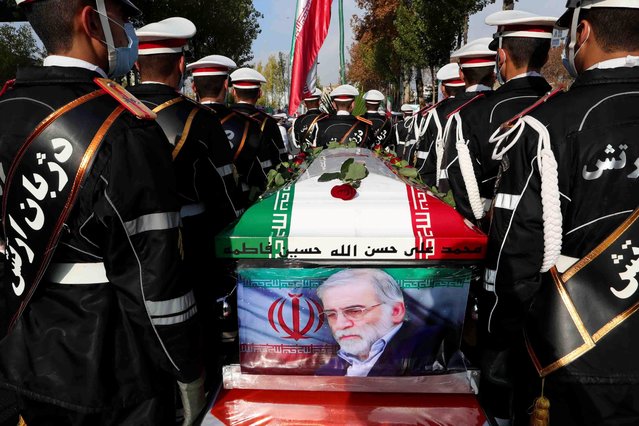 Members of Iranian forces carry the coffin of Iranian nuclear scientist Mohsen Fakhrizadeh during a funeral ceremony in Tehran, Iran on November 30, 2020. With a funeral worthy of the Islamic Republic's greatest “martyrs”, Tehran paid a final tribute to a scientist killed in an assassination blamed on Israel, and promised to continue his work. Fakhrizadeh died on November 27 in a hospital from his wounds after assailants targeted his card and engaged in a gunfight with his bodyguards outside Tehran, according to Iran's defence ministry. (Photo by Iranian Defense Ministry/WANA via Reuters) 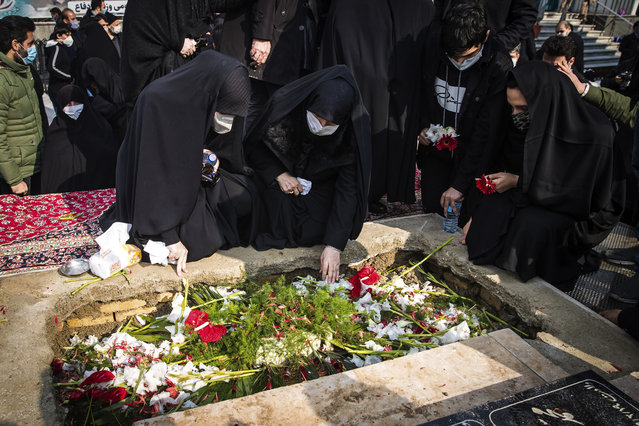 People pray at the grave of Mohsen Fakhrizadeh, a scientist who was killed on Friday, during his burial in Tehran, Iran, Monday, November 30, 2020. Iran held the funeral service Monday for the slain scientist who founded its military nuclear program two decades ago, with the Islamic Republic's defense minister vowing to continue the man's work “with more speed and more power”. (Photo by Hamed Malekpour/Tasnim News Agency via AP Photo) 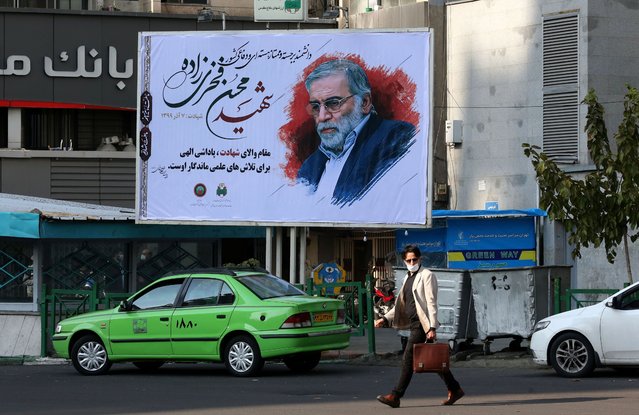 An Iranian man walks by a billboard of slain Iranian nuclear scientist Mohsen Fakhrizadeh in Tehran, on November 30, 2020. Iran laid to rest a nuclear scientist in a funeral befitting a top “martyr”, vowing to redouble his work after an assassination pinned on arch-foe Israel. Fakhrizadeh died on November 27 from his wounds after assailants targeted his car and engaged in a gunfight with his bodyguards outside the capital, according to the defence ministry, heightening tensions once more between Tehran and its foes. (Photo by Atta Kenare/AFP Photo) 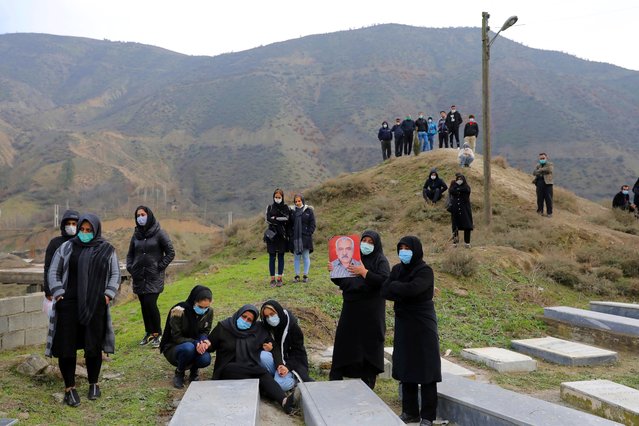 Mourners attend the funeral of a man who died from COVID-19 at a cemetery in the outskirts of the city of Ghaemshahr, in northern Iran, Wednesday, December 16, 2020. (Photo by Ebrahim Noroozi/AP Photo) 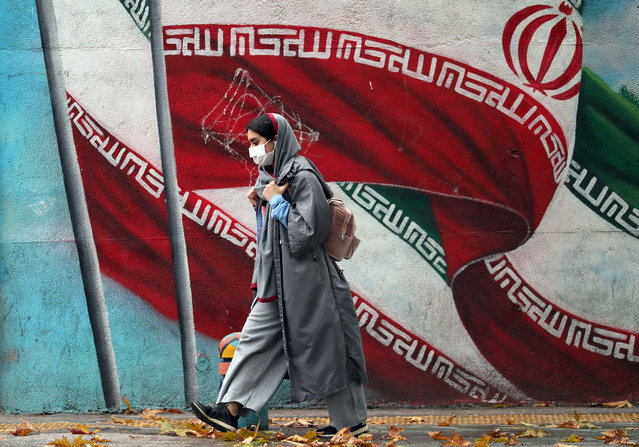 An Iranian girl walks past a mural with Iran's national flag in a street in Tehran, Iran, 03 December 2020. Iranian president Rouhani said that his government does not agree with the parliament's draft bill to quit the nuclear deal, to reduce nuclear commitment and to increase nuclear activities. The development comes after the assassination of Iranian nuclear scientist Mohsen Fakhrizadeh earlier this week. (Photo by Abedin Taherkenareh/EPA/EFE/Rex Features/Shutterstock) 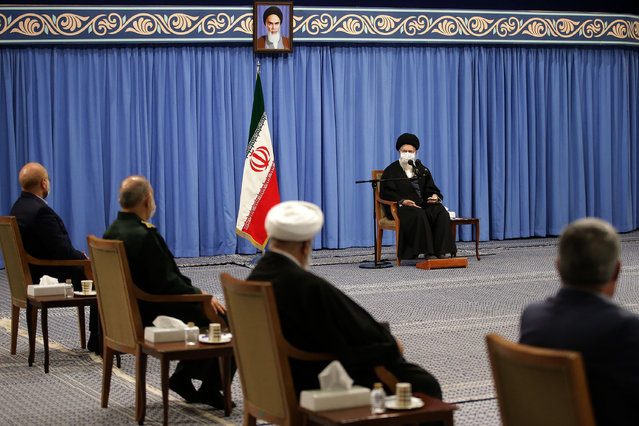 Iran's Supreme Leader Ayatollah Ali Khamenei during a meeting with the family of killed Iran's top General Qasem Soleimanii Iranian major general in the Islamic Revolutionary Guard Corps (IRGC) and, from 1998 until his death in 2020, commander of its Quds Force. Soleimani was killed in an American airstrike near Baghdad airport in January 2020. (Photo by AY-COLLECTION/SIPA Press/Rex Features/Shutterstock) 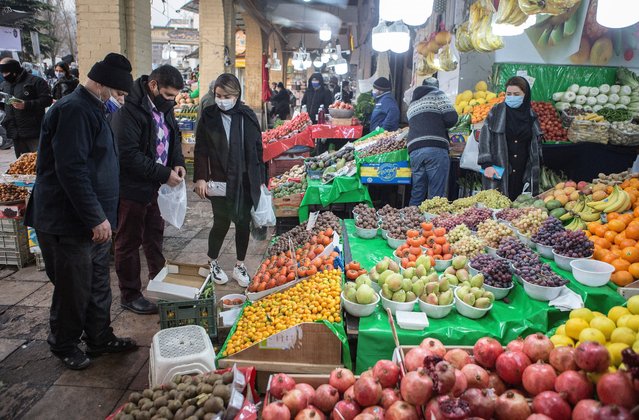 People shop for Yalda Night at an old bazaar in Tehran, Iran, December 20, 2020. Iranian families complete their preparations to celebrate Yalda Night on Sunday evening, while authorities reiterate calls to hold family meetings online this year to prevent the re-spread of COVID-19. Yalda Night, one of the oldest traditions in Iran, is to celebrate with family the longest night of the year. (Photo by Ahmad Halabisaz/Xinhua News Agency) 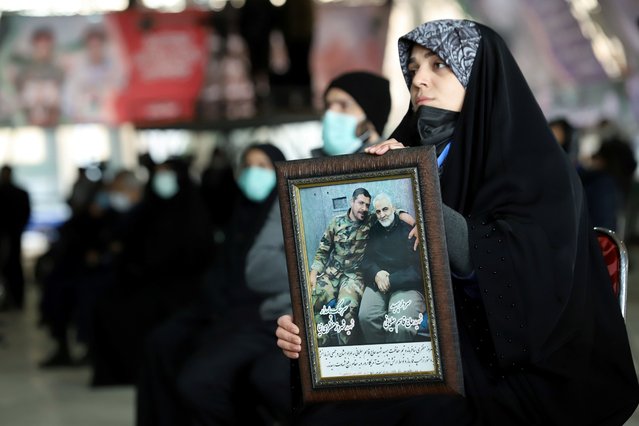 An Iranian woman holds a picture of Qassem Soleimani, during a ceremony to mark the one year anniversary of the killing of senior Iranian military commander General Qassem Soleimani in a U.S. attack, in Tehran, Iran, on January 1, 2021. (Photo by Majid Asgaripour/WANA via Reuters) 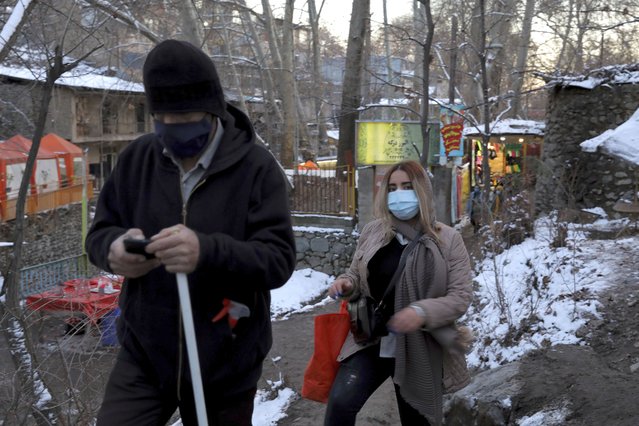 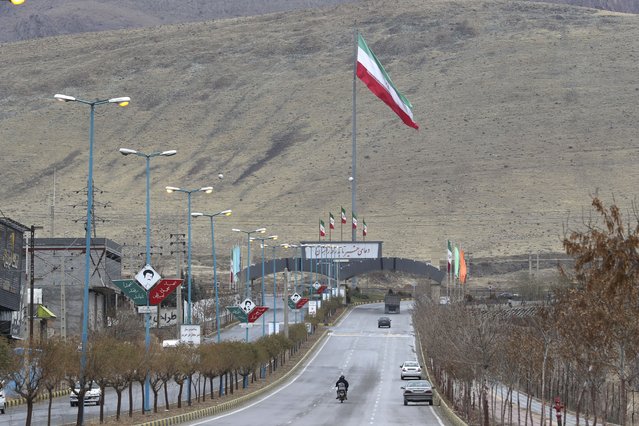 Iran's flag waves at the entrance of Absard, the town where Mohsen Fakhrizadeh, an Iranian scientist linked to the country's nuclear program was killed by unknown assailants last month, east of the capital, Tehran, Iran, Wednesday, December 16, 2020. Iran's supreme leader and the country's president both warned America on Wednesday that the departure of President Donald Trump does not immediately mean better relations between the two nations. (Photo by Vahid Salemi/AP Photo) 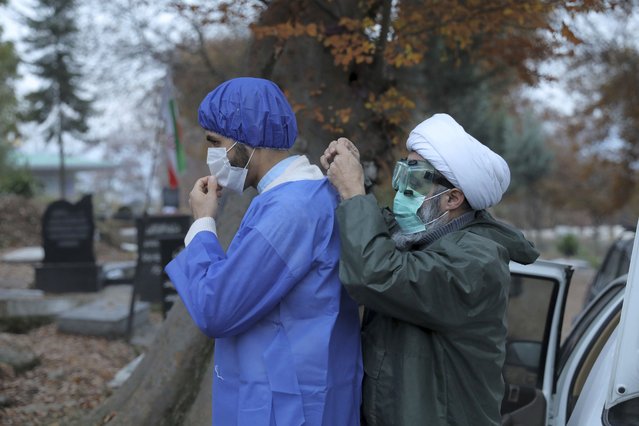 Volunteers prepare for the funeral of a victim who died from COVID-19 at a cemetery in the outskirts of the city of Ghaemshahr, in northern Iran, Wednesday, December 16, 2020. (Photo by Ebrahim Noroozi/AP Photo) 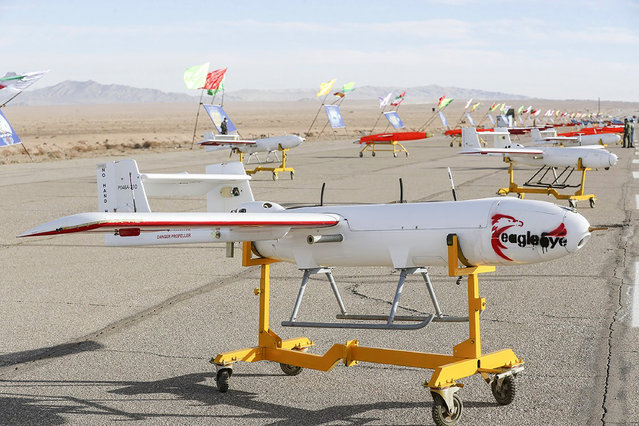 In this undated photo released on Tuesday, January 5, 2021, by Iranian Army, drones are displayed prior to a drill, Iran. The Iranian military on Tuesday began a wide-ranging, two-day aerial drill in the country's north, state media reported, featuring combat and surveillance unmanned aircraft, as well as naval drones dispatched from vessels in Iran's southern waters. (Photo by Iranian Army via AP Photo) 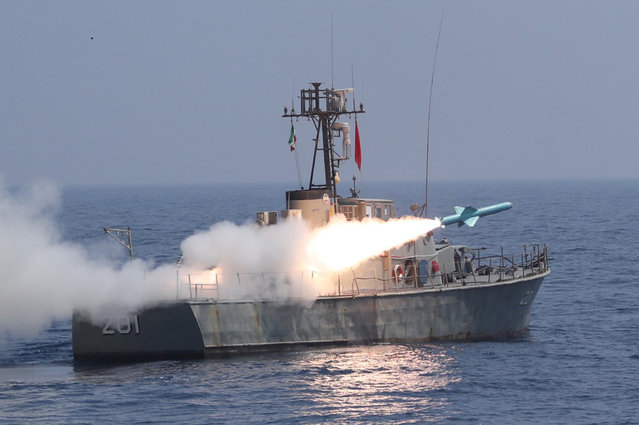 A handout photo made available by the Iranian Army Office shows a missile being fired from an Iranian Navy warship (Sina-class fast attack craft P235) during a navy military drill in the Gulf of Oman, 14 January 2021. Following tensions between Iran and US, Iran begin a short-range missile drill in the Gulf of Oman and inaugurated its local-made warship. (Photo by Iranian Army Office/EPA/EFE) 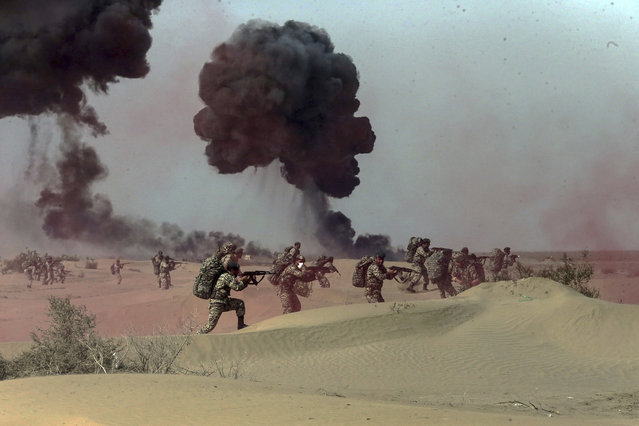 In this photo released Wednesday, January 20, 2021, by the Iranian Army, troops participate in a military drill. Iran's military kicked off a ground forces drill on Tuesday along the coast of the Gulf of Oman, state TV reported, the latest in a series of snap exercises that the country is holding amid escalating tensions over its nuclear program and Washington's pressure campaign against Tehran. (Photo by Iranian Army via AP Photo)
Edit Del
28 Jan 2021 10:31:00, post received 0 comments
Publication archive:
←   →
Popular tags:
All tags
Last searches: