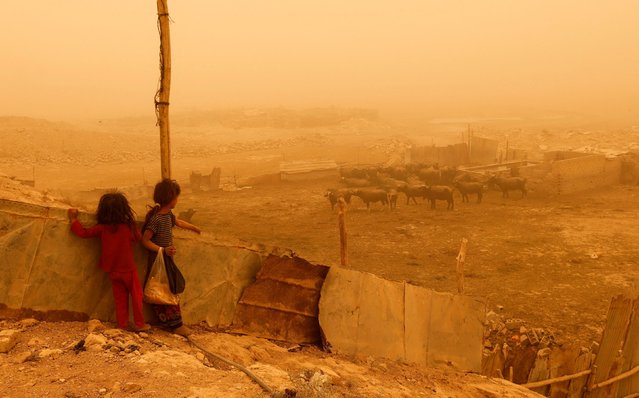 Children look at buffaloes during a sandstorm in eastern Baghdad's al-Futheliyah district, Iraq, May 23, 2022. (Photo by Ahmed Saad/Reuters) 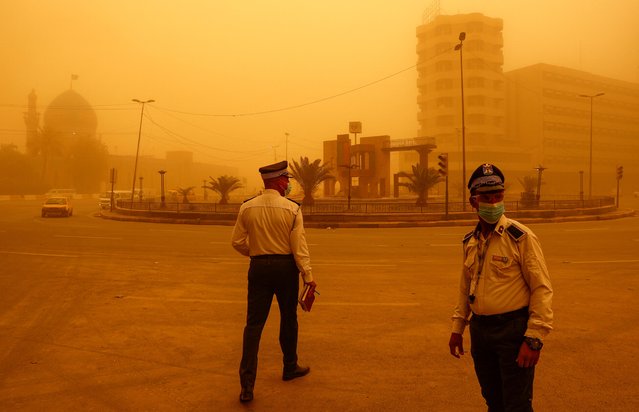 Traffic police officers direct vehicles during a sandstorm in Baghdad, Iraq on May 23, 2022. (Photo by Thaier Al-Sudani/Reuters) 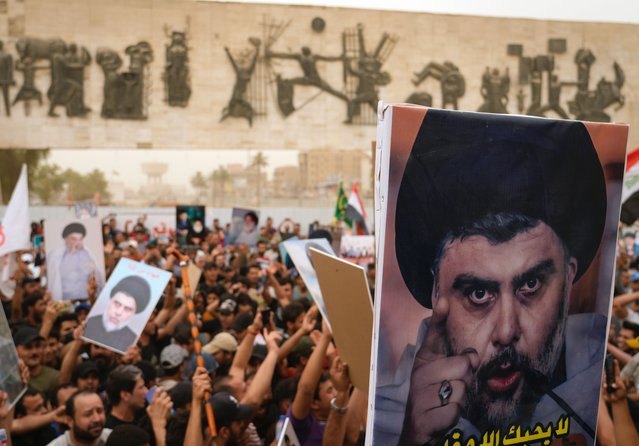 Followers of Shiite cleric Muqtada al-Sadr hold posters with his photo as they celebrate the passing of a law criminalizing the normalization of ties with Israel, in Tahrir Square, Baghdad, Iraq, Thursday, May 26, 2022. (Photo by Hadi Mizban/AP Photo) 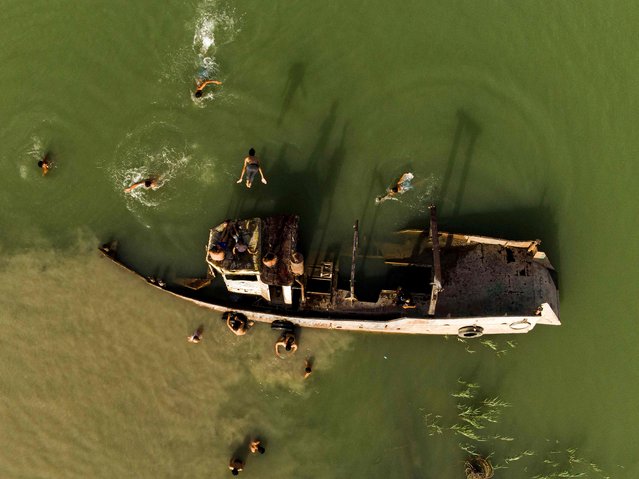 This aerial view shows boys jumping off of and swimming by an old wreckage in the Shatt al-Arab waterway, formed at the confluence of the Euphrates and Tigris rivers, in Iraq's southern city of Basra, on May 30, 2022. (Photo by Hussein Faleh/AFP Photo) 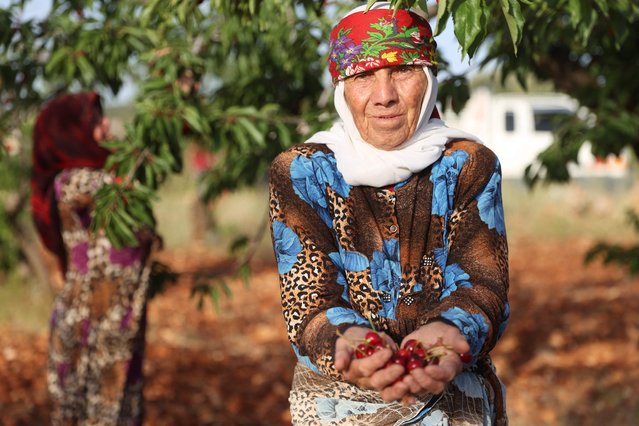 A Syrian farmer displays picked cherries in a field in the town of Juzif in the Jebel al-Zawiyah mountains of Syria's rebel-held Idlib province on May 30, 2022. (Photo by Omar Haj Kadour/AFP Photo) 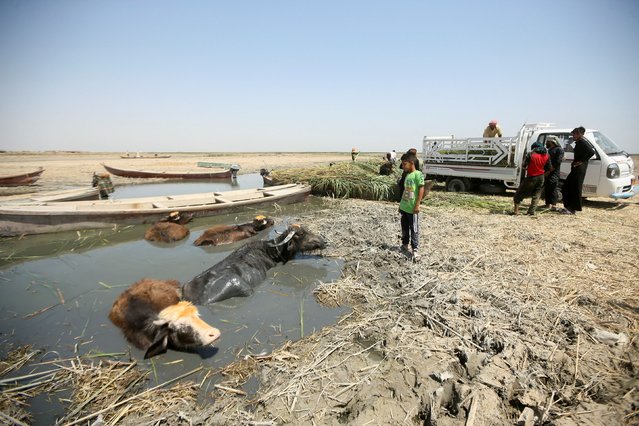 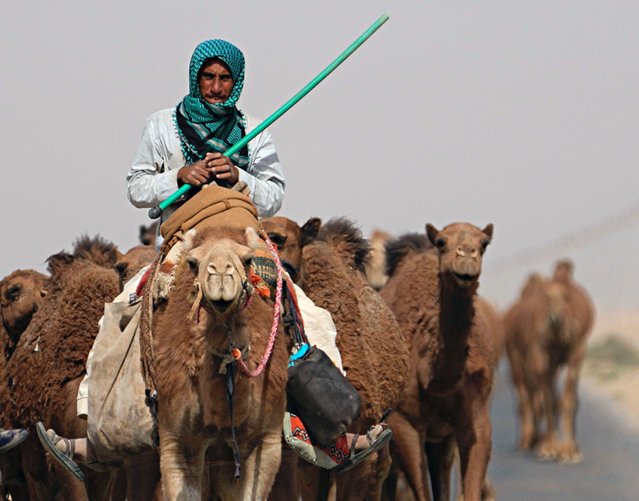 A camel herder leads the way for the camels in al-Samawa, Iraq, Saturday, June 4, 2022. (Photo by Hadi Mizban/AP Photo) 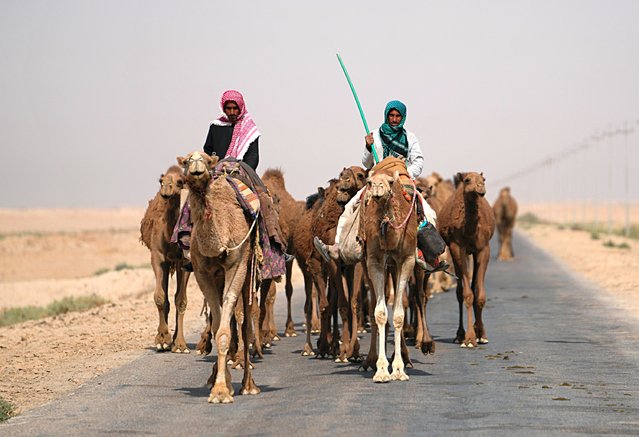 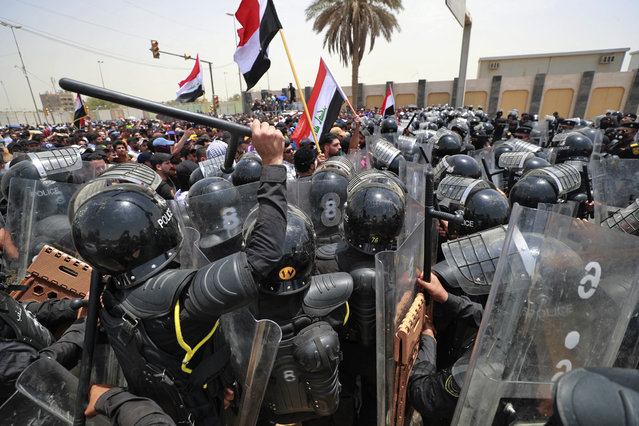 Iraqi security forces deploy to disperse protesters during a demonstration against the government's employment policy near the parliament building in Baghdad's Green Zone on June 7, 2022. The unemployment rate among young people in Iraq is 40%, and a third of its population of more than 40 million people suffers from poverty. (Photo by Ahmad Al-Rubaye/AFP Photo) 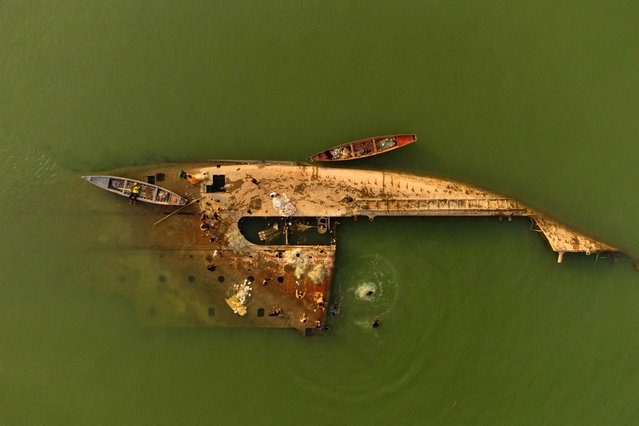 An aerial picture taken by drone shows young Iraqis swimming on a ship wreck in the Shatt al-Arab waterway in the southern city of Basra on June 6, 2022. (Photo by Hussein Faleh/AFP Photo) 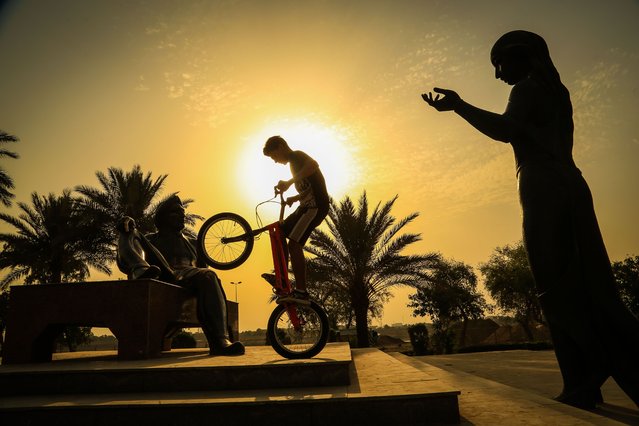 A boy makes an acrobatics show with his bike during sunset in Baghdad, Iraq on June 10, 2022. Iraqi war victimsâ young boys choose the bike show as their social activity with these kinds of activities, they look at life from a different perspective. They prefer Abu Nuas Park and Iraqi Culture Rescue Memorial Park as meeting points. (Photo by Murtadha Al-Sudani/Anadolu Agency via Getty Images) 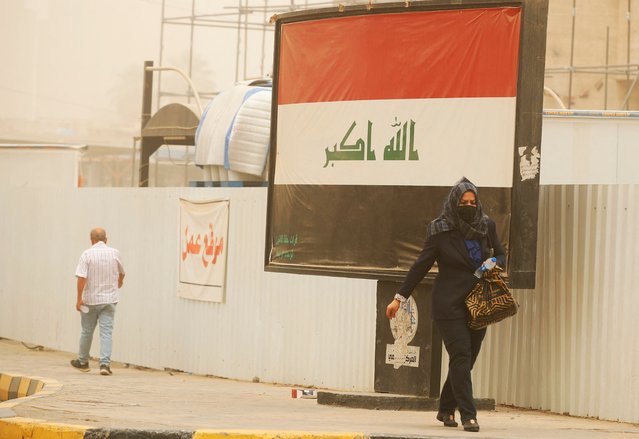 A woman covers her face as she walks past a national flag in Baghdad with white dust covering the Iraqi capital and surrounding areas on June 13, 2022 for the tenth time since mid-April. – Iraq temporarily closed Baghdad airport due to crippling duststorms, the latest in a country that has warned climate change poses an “existential threat”. (Photo by Ahmad Al-Rubaye/AFP Photo) 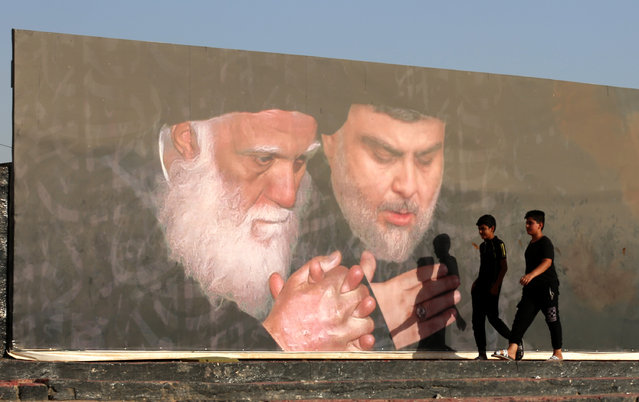 Two Iraqi boys pass by the pictures of Muqtada al-Sadr and his father Mohamed Sadiq al-Sadr in Sadr city, the stronghold of followers of Sadrist Movement of northeastern Baghdad, Iraq, 14 June 2022. The members of Iraq's largest parliamentary bloc Sadrist Movement, resigned from the Iraqi parliament on 13 June 2022, following orders from their leader, Shiite cleric Muqtada al-Sadr, protesting the Shiite political blocs' refusal to form a national majority government eight months after the legislative elections that took place in October 2020. (Photo by Ahmed Jalil/EPA/EFE) 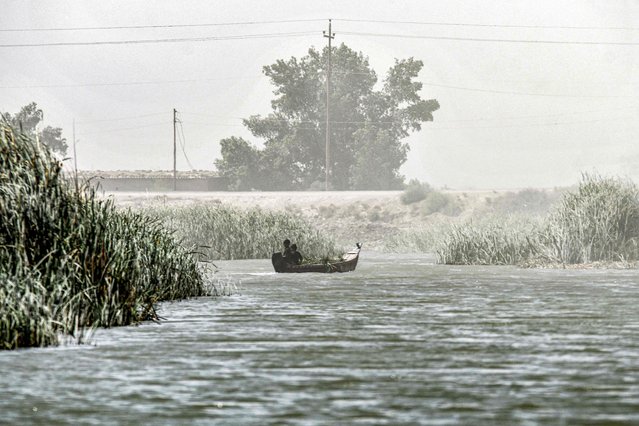 Boys sit in a boat during a dust storm in Iraq's southern marshes of Chibayish in Dhi Qar province on June 15, 2022. (Photo by Asaad Niazi/AFP Photo) 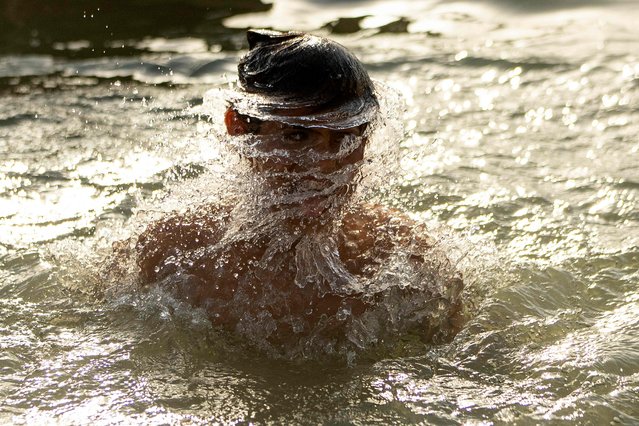 A boy cools off in the Shatt al-Arab waterway, formed at the confluence of the Euphrates and Tigris rivers, in Iraq's southern city of Basra near sunset on June 18, 2022. (Photo by Hussein Faleh/AFP Photo) 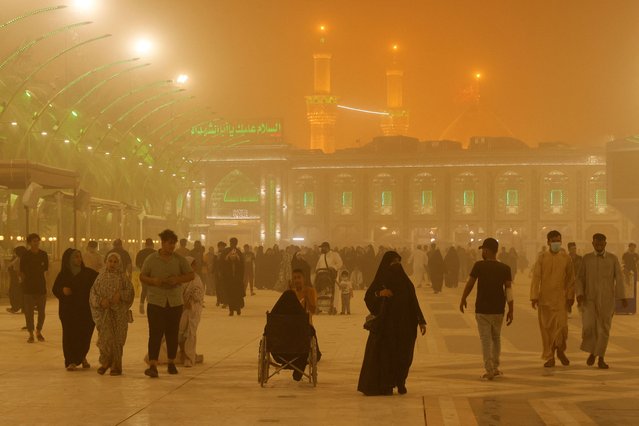 People are pictured near Imam Hussein shrine during a sandstorm in the holy city of Kerbala, Iraq, June 26, 2022. (Photo by Abdullah Dhiaa Al-deen/Reuters) 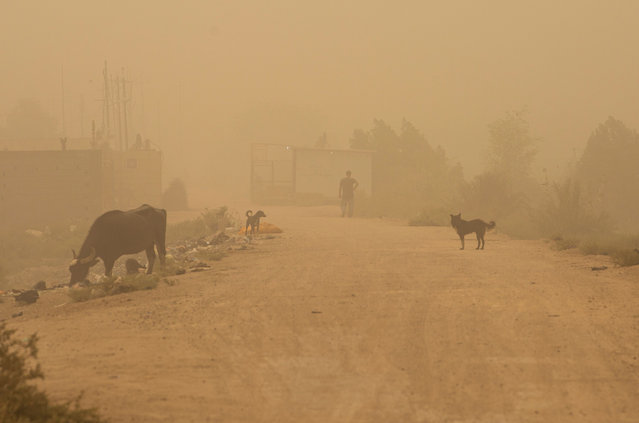 Animals are pictured on a road during a snadstorm in Iraq's southern city of Basra, on June 26, 2022. (Photo by Hussein Faleh/AFP Photo) 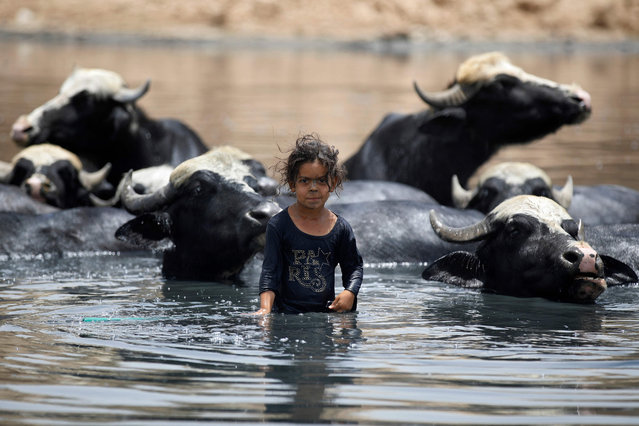 A young Iraqi shepherdess cools down buffaloes in wastewater filling the dried-up Diyala river which was a tributary of the Tigris, in the Al-Fadiliyah district east of Baghdad, on June 26, 2022. Iraq's drought reflects a decline in the level of waterways due to the lack of rain and lower flows from upstream neighboring countries Iran and Turkey. (Photo by Ahmad Al-Rubaye/AFP Photo) 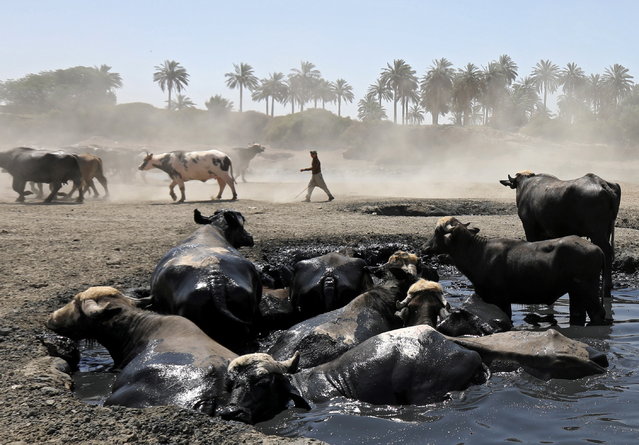 A shepherd watches his buffalos cool off in the scarce waters of Diyala River, which turned into pools of sewage water due to desertification and pollution, east of Baghdad, Iraq, 29 June 2022. Low rainfall and upstream damming in neighboring Iran and Turkey have led to drops in the Tigris and Euphrates water levels. The Iraqi Ministry of Agriculture warned that 90 percent of Iraqi agricultural land has been desertified or is at risk of desertification in the near future, due to climate change and water disputes with Iran and Turkey. (Photo by Ahmed Jalil/EPA/EFE)
Edit Del
07 Jul 2022 04:21:00, post received 0 comments
Publication archive:
←   →
Popular tags:
All tags
Last searches: