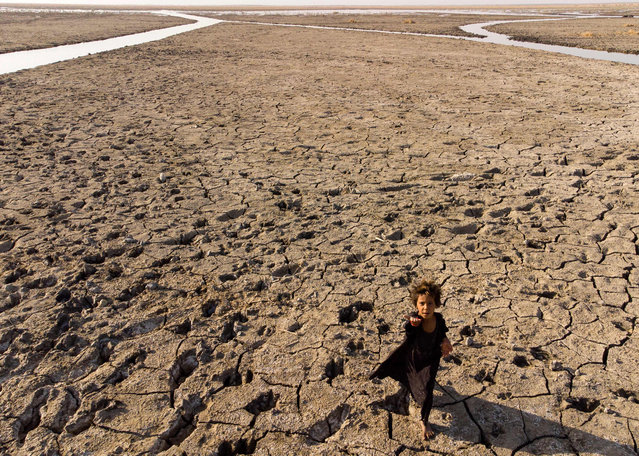 A child walks on the dried-up bed of Iraq's receding southern marshes of Chibayish in Dhi Qar province on August 23, 2022. (Photo by Hussein Faleh/AFP Photo) 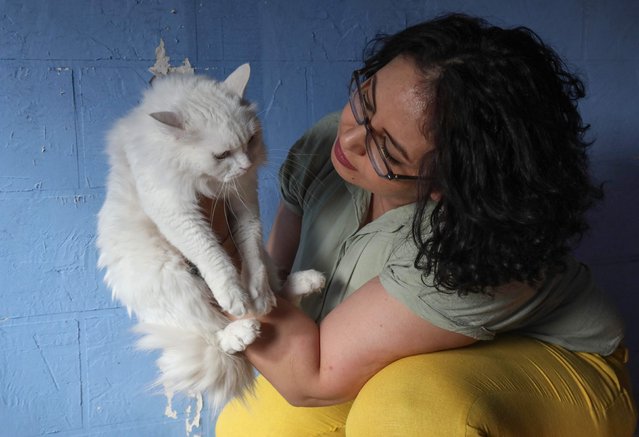 Amal Amro, the Palestinian-Syrian owner, plays with a cat at 'Amal Pets Hotel' in Arbil, the capital of Iraq's northern Kurdish autonomous region, on August 24, 2022. (Photo by Safin Hamed/AFP Photo) 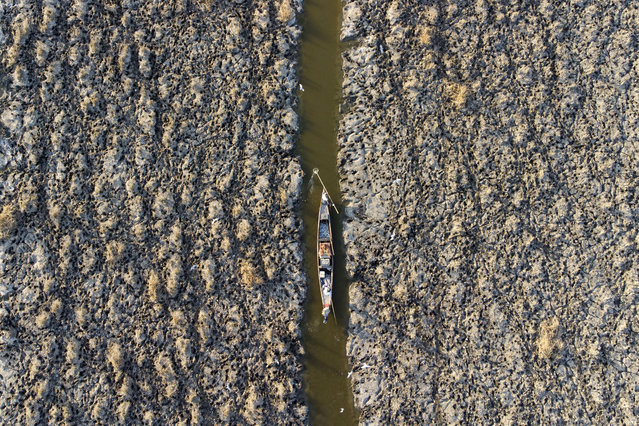 This picture shows an aerial view of a fishing boat coasting through a canal in Iraq's receding southern marshes of Chibayish in Dhi Qar province on August 23, 2022. (Photo by Hussein Faleh/AFP Photo) 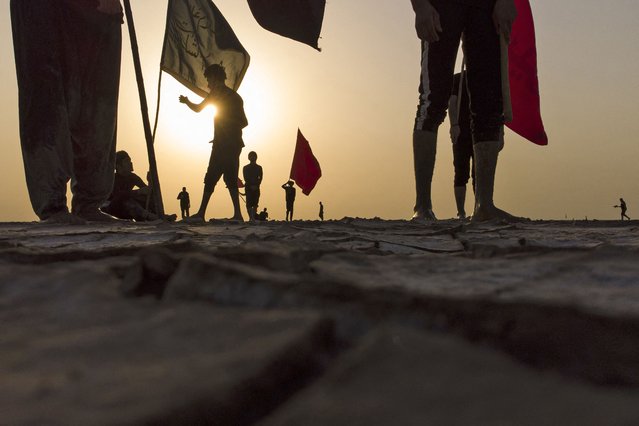 Shiite Muslim pilgrims walk in the flats near the Gulf waters as they begin their march from Iraq's southern port city of al-Faw on their way to the holy city of Karbala, ahead of the Arbaeen religious festival, on August 25, 2022. (Photo by Hussein Faleh/AFP Photo) 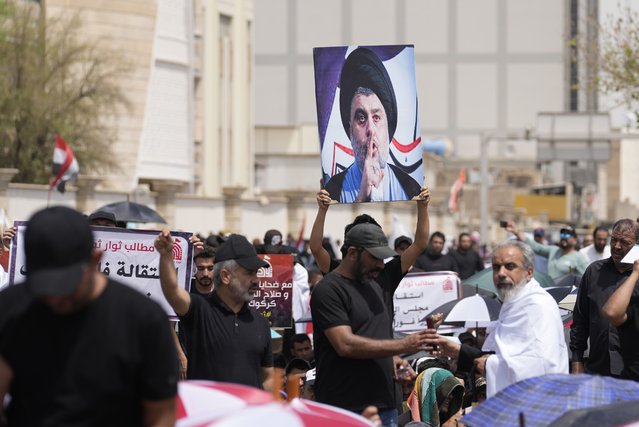 Supporters of Shiite cleric Muqtada al-Sadr with his poster gather during an open-air Friday prayers near the parliament building in Baghdad, Iraq, Friday, August 26, 2022. Al-Sadr's supporters continue their sit-in outside the parliament to demand early elections. (Photo by Hadi Mizban/AP Photo) 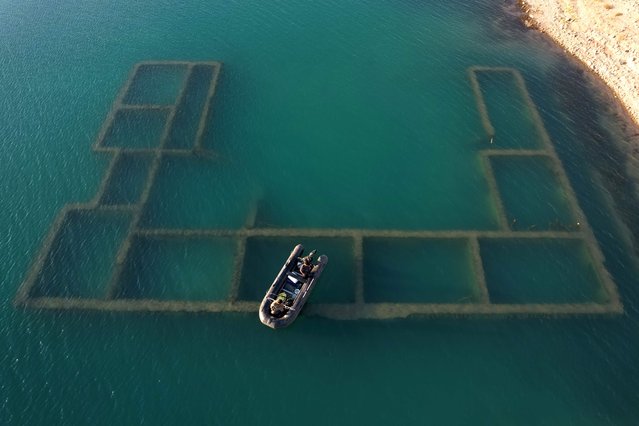 An aerial view shows the remains of the submerged Gary Qasruka village abandoned 36 years ago, which have partly resurfaced following a large drop in water level of the Dohuk Dam due to drought, in the northern Iraqi city of Dohuk in the autonomous Kurdish region on August 28, 2022. (Photo by Ismael Adnan/AFP Photo) 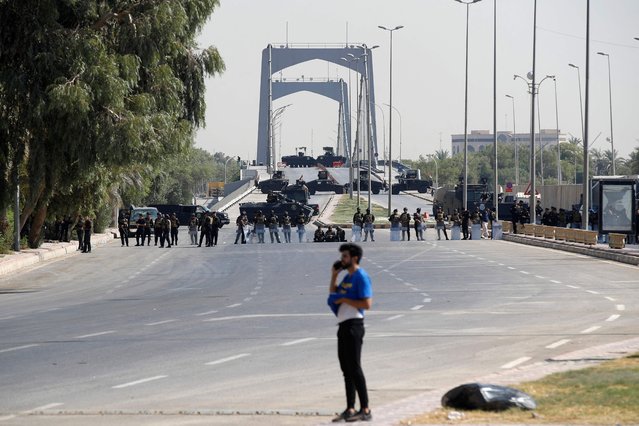 Iraqi police are pictured blocking the entrance into the capital Baghdad's Green Zone, on August 29, 2022. Dozens of angry supporters of the powerful cleric stormed the Republican Palace, a ceremonial building in the fortified Green Zone, a security source said, shortly after Sadr said he was quitting politics. The army has announced a Baghdad-wide curfew to start from 3:30 pm (1230 GMT). (Photo by Ahmad Al-rubaye/AFP Photo) 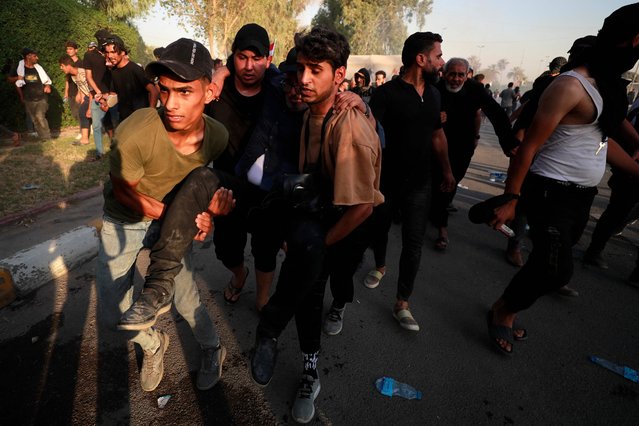 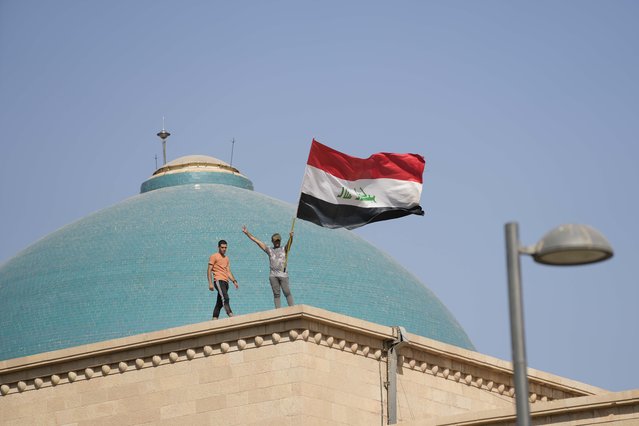 Supporters of Shiite cleric Muqtada al-Sadr wave a national flag from the roof of the Government Palace during a demonstration in Baghdad, Iraq, Monday, August 29, 2022. Al-Sadr, a hugely influential Shiite cleric announced he will resign from Iraqi politics and his angry followers stormed the government palace in response. The chaos Monday sparked fears that violence could erupt in a country already beset by its worst political crisis in years. (Photo by Hadi Mizban/AP Photo) 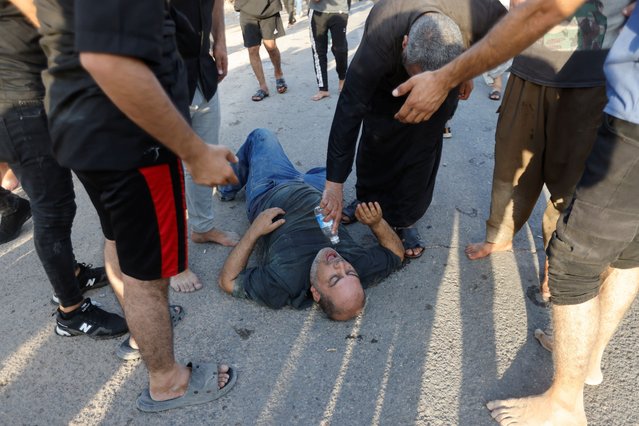 An injured supporter of Iraqi populist leader Moqtada al-Sadr is given water amidst a protest at the Green Zone, in Baghdad, Iraq on August 29, 2022.. (Photo by Ahmed Saad/Reuters) 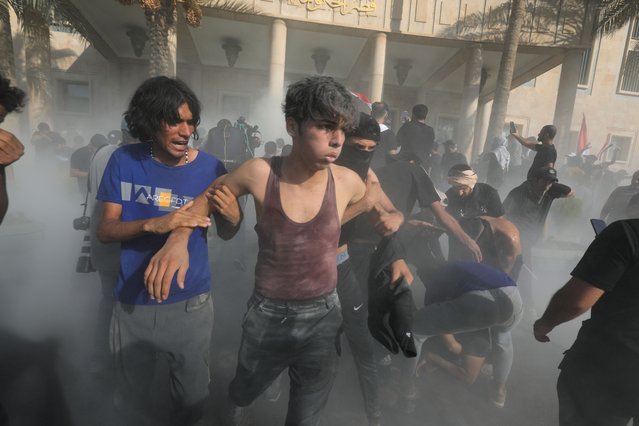 Supporters of Iraqi Shiite cleric Muqtada al-Sadr help injured protesters during clashes with anti-riot forces near the office of prime minister, Baghdad, Iraq, 29 August 2022. Several people were reportedly killed in clashes that erupted as supporters of al-Sadr stormed the Republican Palace following his announcement of final retirement and the closure of institutions. (Photo by Ahmed Jalil/EPA/EFE) 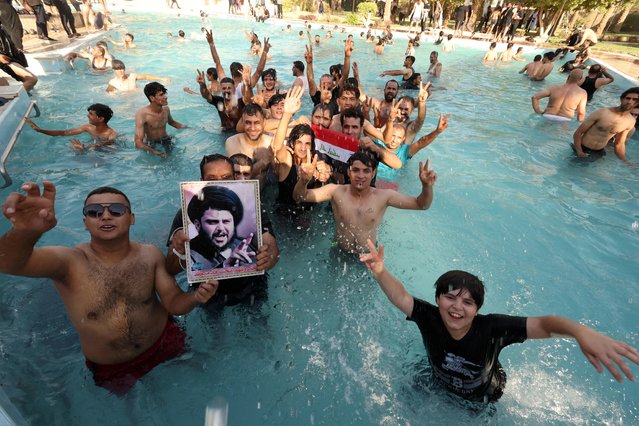 Supporters of Iraqi populist leader Moqtada al-Sadr swim as they protest inside the Republican Palace in the Green Zone, in Baghdad, Iraq on August 29, 2022. (Photo by Alaa Al-Marjani/Reuters) 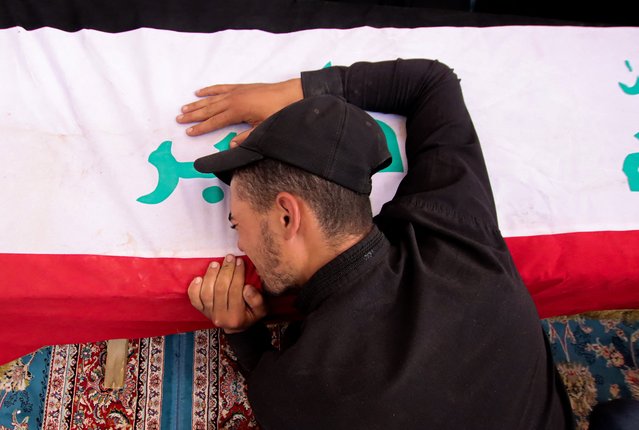 An Iraqi mourner attends a mass funeral, for supporters of Shiite leader Moqtada Sadr who were killed during clashes in Baghdad's Green Zone, at a cemetary in the central Iraqi city of Najaf on August 30, 2022. Fighting between rival Iraqi forces raged for a second day Tuesday with rocket fire echoing from Baghdad's Green Zone where 23 supporters of powerful Shiite leader Moqtada Sadr have been shot dead, medics said. Tensions have soared in Iraq amid a political crisis that has left the country without a new government, prime minister or president for months, and escalated sharply after Sadr's supporters on Monday afternoon stormed the government palace following their leader's announcement that he was quitting politics. (Photo by Ali Najafi/AFP Photo) 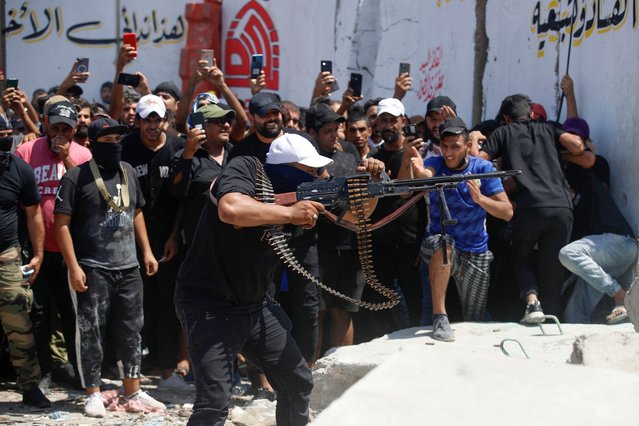 Armed members of Saraya al-Salam (Peace Brigade), the military wing affiliated with Shiite cleric Moqtada al-Sadr, take aim during clashes with Iraqi security forces in Baghdad's Green Zone on August 30, 2022. Fighting between rival Iraqi forces resumed in Baghdad, where 23 supporters of Shiite leader Moqtada Sadr have been shot dead since Monday, according to the latest toll by medics. Clashes between Sadr's supporters and the army and men of the Hashed al-Shaabi, former paramilitaries integrated into the Iraqi forces, had calmed down overnight but resumed again on this morning. (Photo by Ahmad Al-Rubaye/AFP Photo) 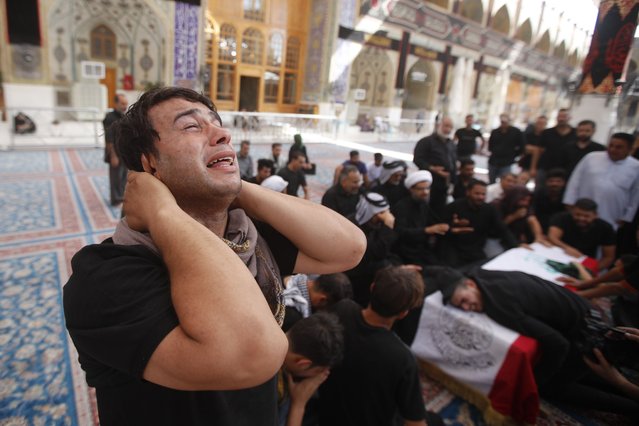 Relatives attend a funeral of a man killed during clashes with security in Baghdad during his funeral in Najaf, Iraq, Tuesday, August 30, 2022. An influential Shiite cleric Muqtada al-Sadr announced Monday that he will resign from Iraqi politics, and hundreds of his angry followers responded by storming the government palace. The move sparked violent clashes with security forces in which at least 15 protesters were killed. (Photo by Anmar Khalil/AP Photo) 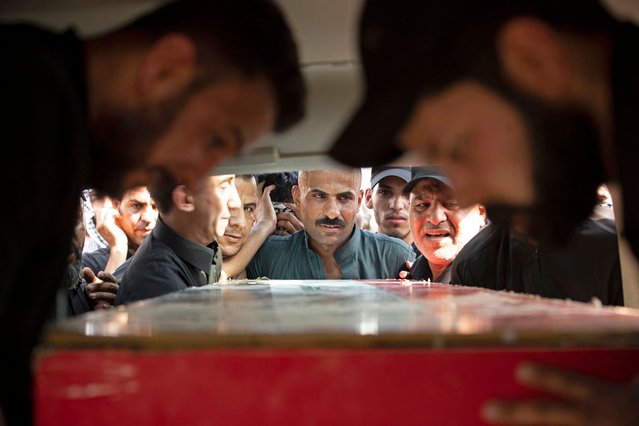 Iraqi mourners attend the funeral of two Saraya al-Salam fighters, an armed faction linked to powerful Shiite cleric Moqtada Sadr, in the southern Iraqi city of Basra on September 1, 2022. Four militants were killed overnight after an ambush in the southern Iraqi city of Basra sparked clashes between rival Shiite factions, a security source, days after deadly clashes in the capital. (Photo by Hussein Faleh/AFP Photo) 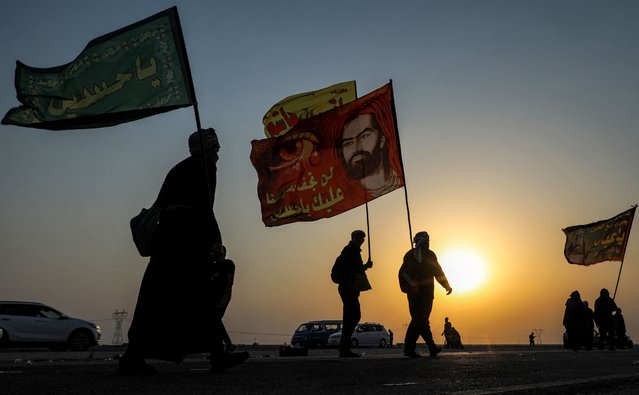 Shiite Muslim pilgrims march with flags en route to Karbala from Nasiriyah in Iraq's southern Dhi Qar province on September 5, 2022, ahead of the holiday of Arbaeen. (Photo by Asaad Niazi/AFP Photo) 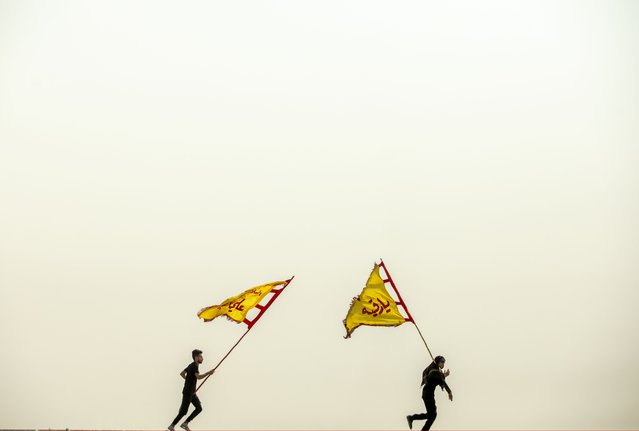 Shia Muslims make their way on foot en route to the Husayn Mosque in Karbala, about 270 kilometers northwest, for the Arba'een religious observance September 7, 2022 in Nasiriyah, Iraq. Millions make the annual journey to commemorate the martyrdom of the grandson of the Islamic prophet Muhammad and the third Shia Muslim Imam, Husayn ibn Ali in 680 AD. (Photo by Majid Saeedi/Getty Images) 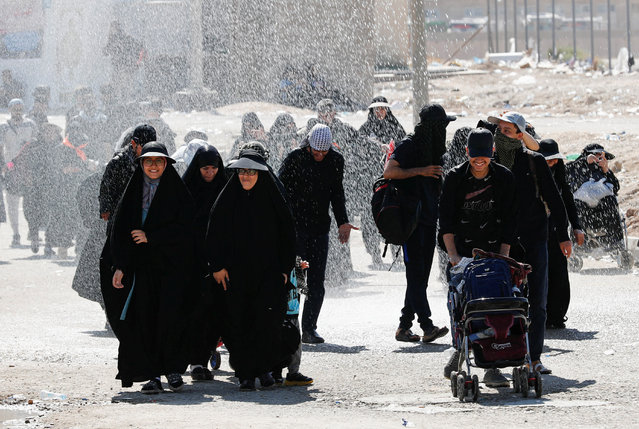 Iranian Shi'ite pilgrims walk on a road after entering Iraq through the Zurbatia border crossing between Iran and Iraq, as they head towards Iraq's holy city of Kerbala to attend the holy Shi'ite ritual of Arbaeen, in Zurbatia, Iraq on September 12, 2022. (Photo by Thaier Al-Sudani/Reuters) 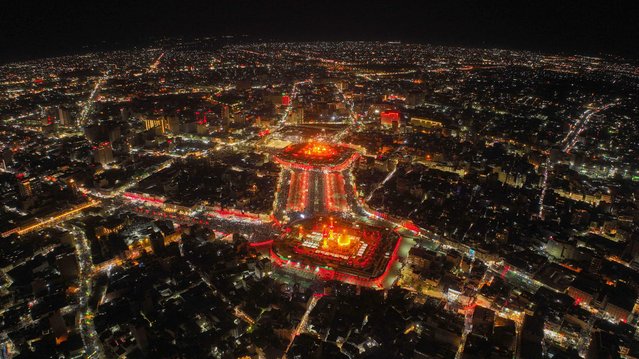