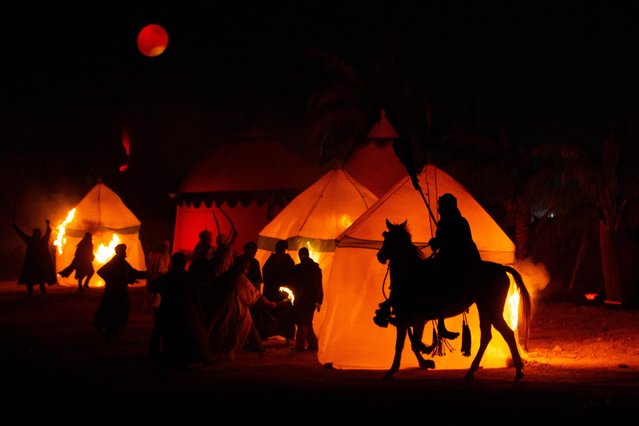 Actors re-enact the events of the seventh century AD battle of Karbala in which Prophet Mohammad's grandson Imam Hussein was killed, during a play produced by Iraq's pro-Iran Shiite Muslim Hashed al-Shaabi paramilitary network in the southern city of Basra on December 26, 2021. (Photo by Hussein Faleh/AFP Photo) 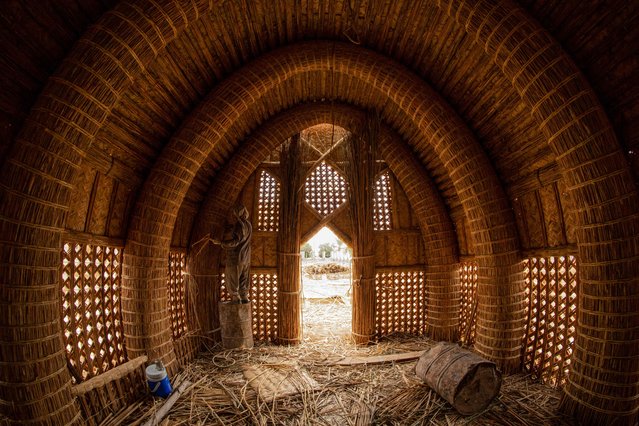 An Iraqi craftsman works on the construction of a traditional guest house (Mudhif), in front of the museum of the southern city of Basra, on December 29, 2021. The traditional Mudhif, a large ceremonial house for use by guests or as a gathering place for special occasions, is constructed from reeds, straw and other natural materials harvested from the marshes in southern Iraq. (Photo by Hussein Faleh/AFP Photo) 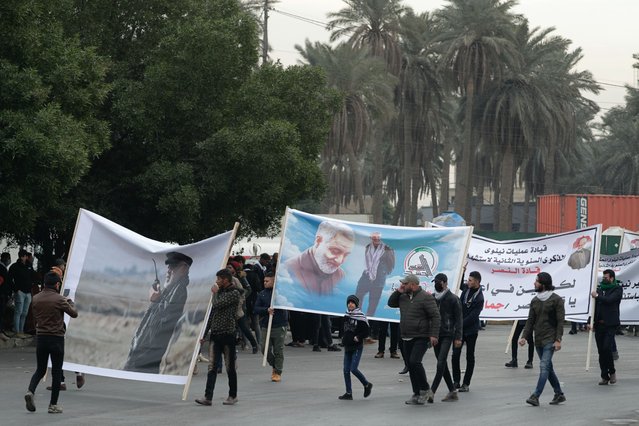 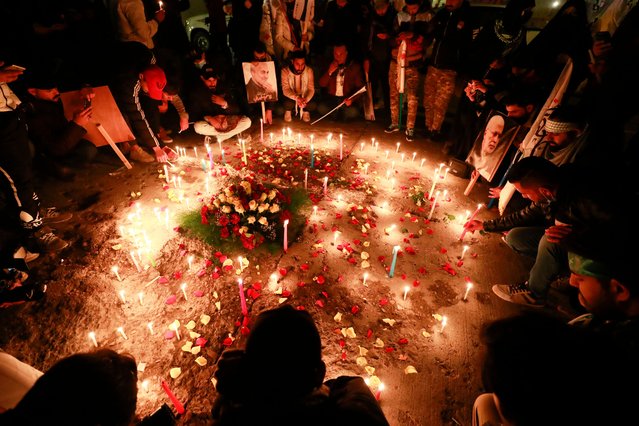 Iraqis light candles during a commemoration ceremony held to mark the upcoming second anniversary of the killing of Iranian general Qasem Soleimani and his Iraqi lieutenant Abu Mahdi al-Muhandis (image), at the spot where they were killed, near Baghdad's International Airport, on January 2, 2022. The January 3, strike against Soleimani, the architect of Iran's Middle Eastern military strategy, was ordered by then US president Donald Trump, and it also killed his Iraqi lieutenant Abu Mahdi al-Muhandis, the Hashed's deputy chief. (Photo by Ahmad Al-Rubaye/AFP Photo) 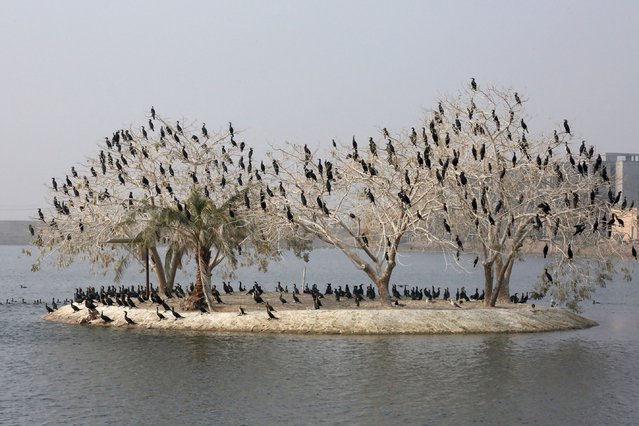 A picture taken on January 12, 2022 shows migratory birds on a tree in a lake in front of one of the palaces of Iraq's late deposed president, Saddam Hussein, near Baghdad airport as flocks of birds fly over Iraq in winter as they search for warmer territories. (Photo by Sabah Arar/AFP Photo) 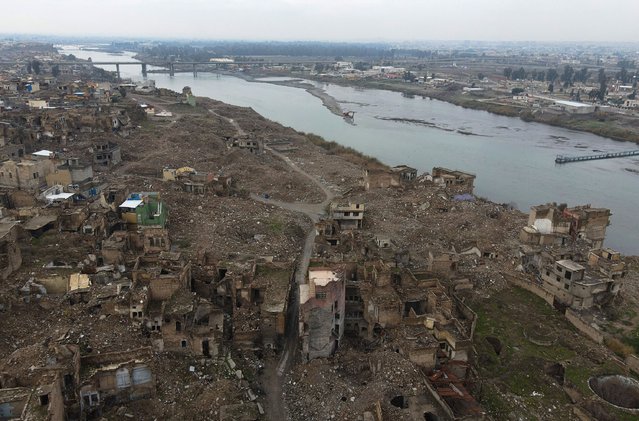 An aerial view shows the Tigris river and destroyed buildings in the war-ravaged old part of Iraq's northern city Mosul, a site heavily damaged by Islamic State (IS) group fighters in the 2017 battle for the city, on January 16, 2022. (Photo by Zaid Al-Obeidi/AFP Photo) 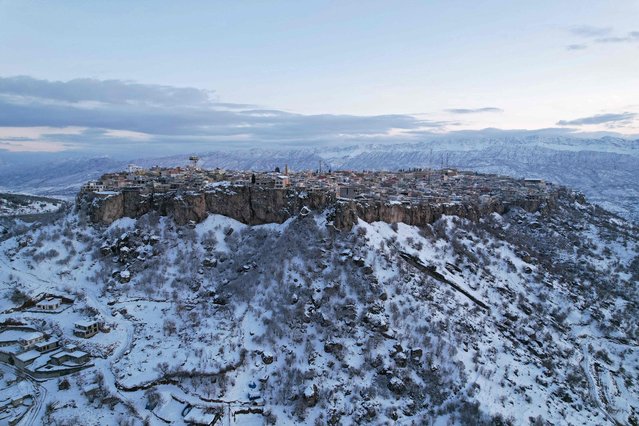 An aerial view shows the snow covered mountains surrounding the town of Amadiyah, built on the top of the mountain at an altitude of 1400 meters above sea level and located about 75 kilometres north of the city of Dohuk autonomous Iraqi Kurdistan region, on January 17, 2022. (Photo by Ismael Adnan/AFP Photo) 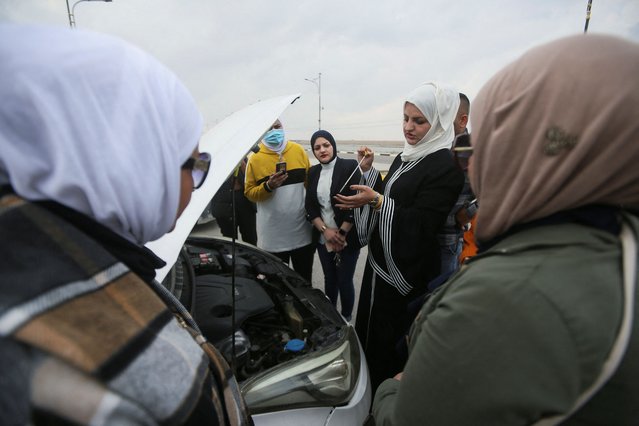 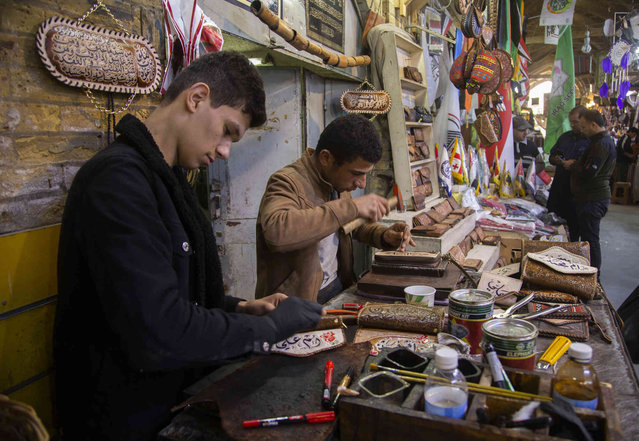 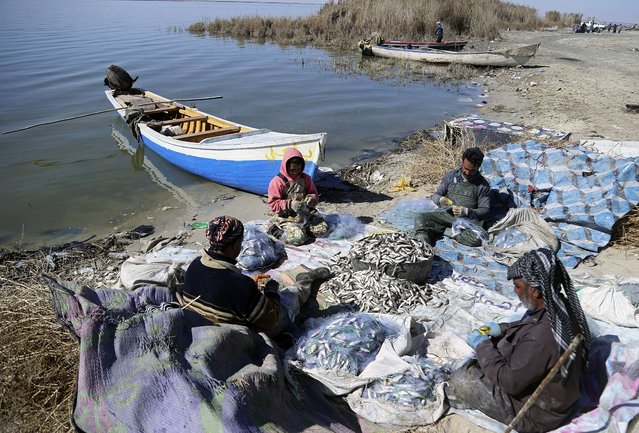 Fishermen sort their catch on the bank of Razzaza Lake, also known as Lake Milh, Arabic for salt, in the Karbala governorate of Iraq,, February 14, 2022. One of Iraq’s largest lakes, it is seeing a significant decline in water levels, and has been hit by pollution and high levels of salinity. The number of dead fish that turn up is bigger than the number of live fish they can catch. (Photo by Hadi Mizban/AP Photo) 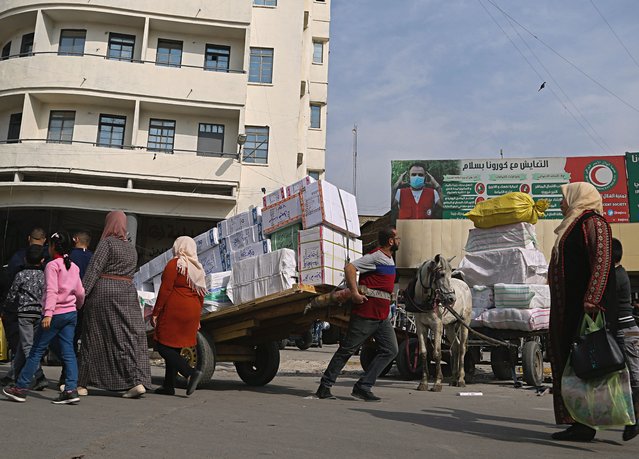 A worker pulls a cart in the Shorja market of Baghdad, Iraq, Sunday, February 20, 2022. (Photo by Hadi Mizban/AP Photo) 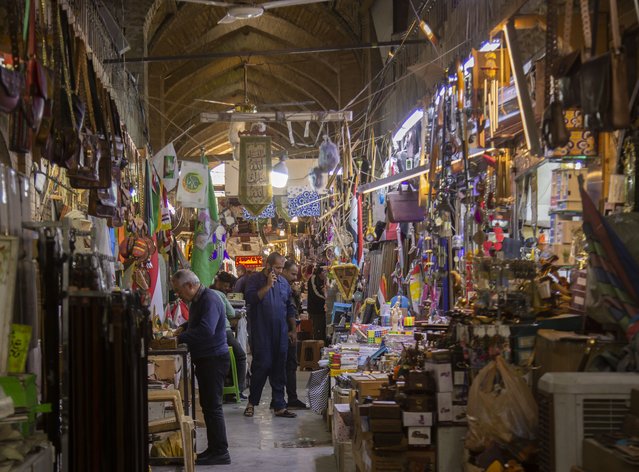 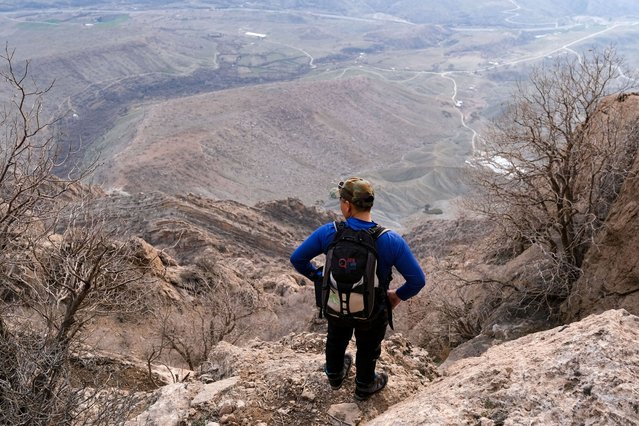 Payman Taha, a 49-year-old Kurdish woman called as “Rambo”, a leader of hiking group, stands on the way to the top of Nabi Agha Mountain, in Sulaimaniyah, Iraq, February 18, 2022. (Photo by Mohammed Jalal/Reuters) 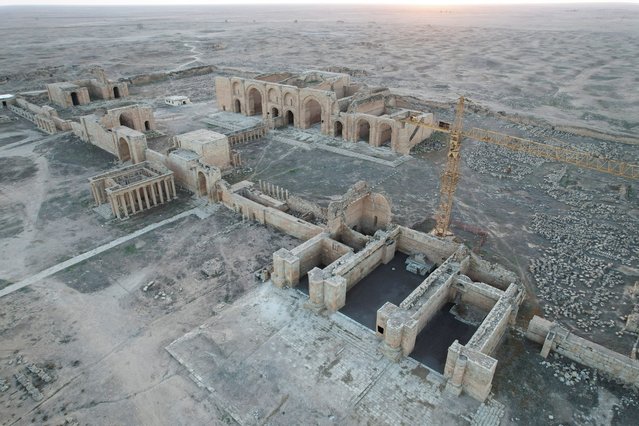 A view shows Hatra city, which was destroyed by Islamic State militants years ago, before a ceremony revealing its renovation project, in the ancient city of Hatra, Iraq, February 23, 2022. (Photo by Abdullah Rashid/Reuters) 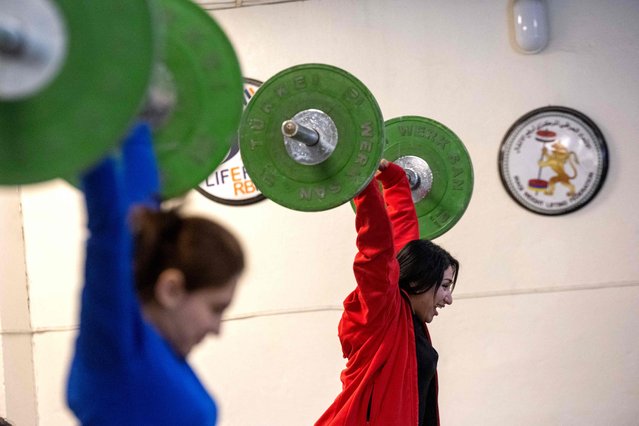 Iraqi Kurdish women train weight lifting at a centre in Iraq's Kurdish regional capital of Arbil on February 2, 2022. Women's sports have developed at a sluggish pace across much of conservative Iraq, which has struggled through decades of conflict. But the Kurdistan region was spared the brunt of the violence and destruction, and its infrastructure, facilities and government funding have paved the way for a boom in professional women's sports. (Photo by AFP Photo/Stringer) 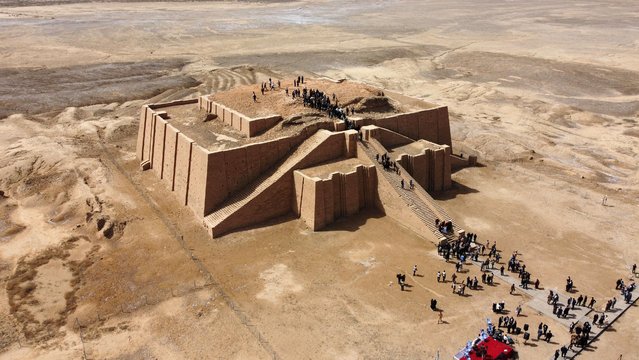 Clerics and officials attend a National Day for Tolerance ceremony, the first anniversary of Pope Francis's visit at the ancient archeological site of Ur, traditionally believed to be the birthplace of Abraham, in Ur near Nassiriya, Iraq on March 6, 2022. (Photo by Thaier al-Sudani/Reuters) 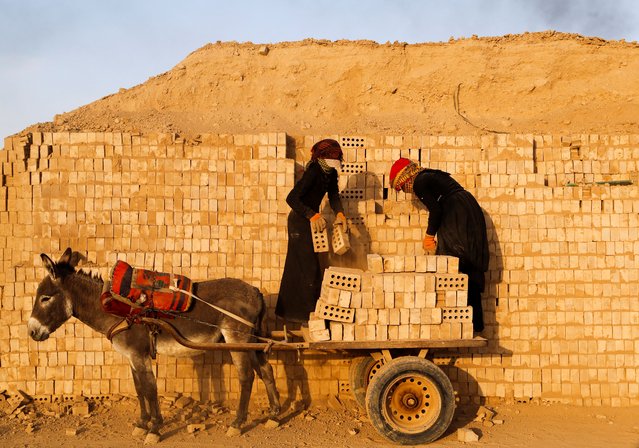 Labourers work at a brick factory construction site, in the town of Nahrawan near Baghdad, Iraq on March 8, 2022. (Photo by Ahmed Saad/Reuters) 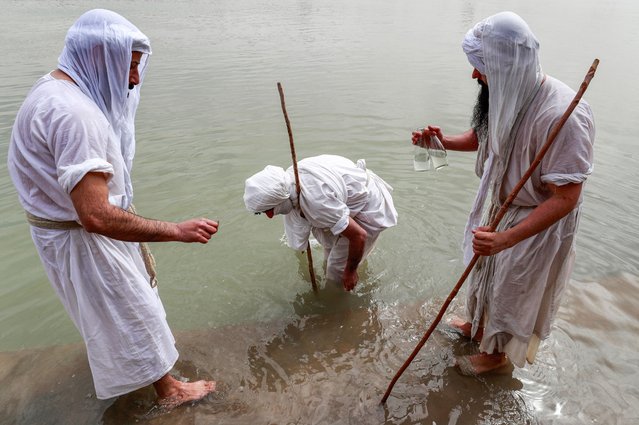 Adherents of the pre-Christian Sabaean faith, which considers the prophet Abraham as one of its founders, perform a ritual in the waters of the Tigris River in Iraq's capital Baghdad, on March 15, 2022. Eid al-Khalqeh is a five-day religious holiday celebrated by the Sabaeans, also known in English as Mandaeans, and is a monotheistic religion historically practised around the lower Euphrates and Tigris. The Sabaeans speak a distinct language, Mandaean, and their religious books are written in Sabaean script. (Photo by Ahmad Al-Rubaye/AFP Photo) 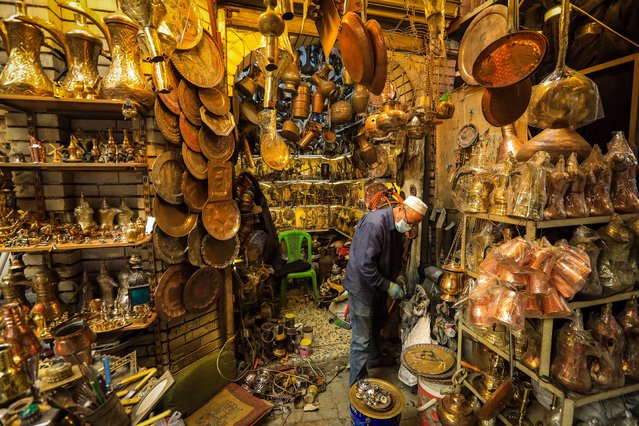 A copper master and his copper products are seen at Coppersmith Bazaar in Baghdad, Iraq on March 15, 2022. In the Coppersmiths' Bazaar on the famous Resid Street of the capital Baghdad, jugs, tea mugs, spoons, photo frames and other household materials decorated with copper embroideries are obtained after long efforts of copper masters. (Photo by Murtadha Al-Sudani/Anadolu Agency via Getty Images) 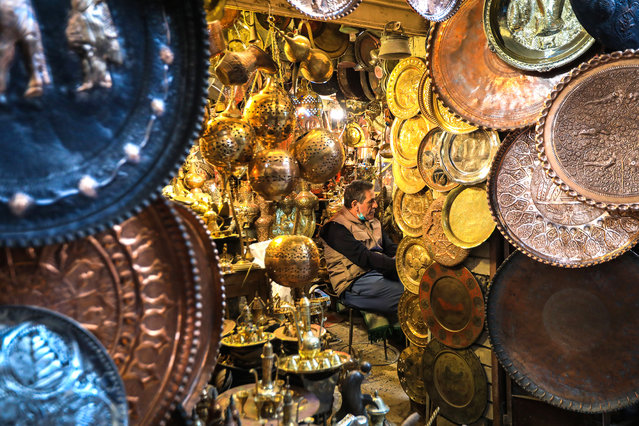