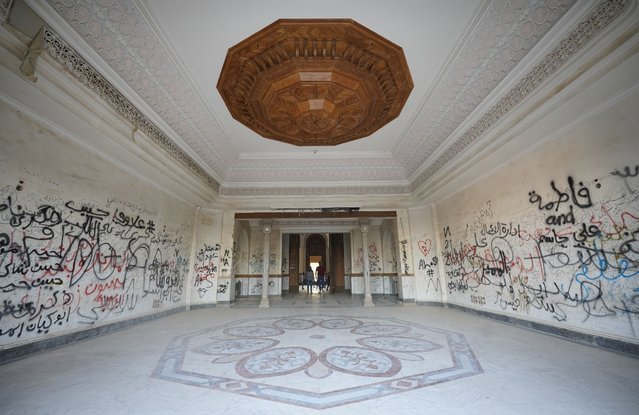 A view of the Palace of Saddam Hussein a former palace of deposed Iraqi leader, located in the ancient city of Babylon in Babil, Iraq on November 05, 2021. (Photo by Karar Essa/Anadolu Agency via Getty Images) 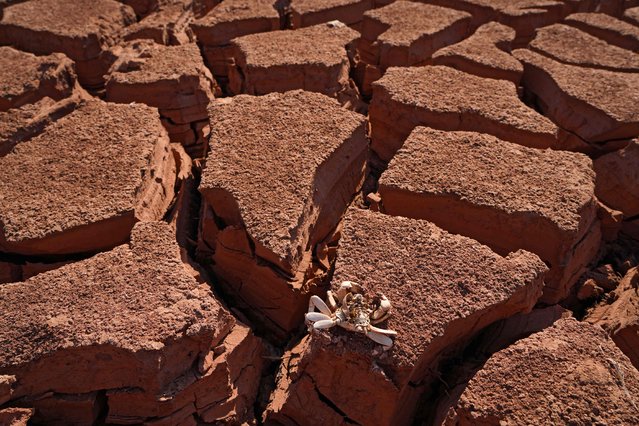 An general view shows a dead crab stuck to the dry and cracked soil at Zawita Dam, located about 20 km from the northern Iraqi city of Dohuk in the autonomous Kurdish region, on November 12, 2021. (Photo by Ismael Adnan/AFP Photo) 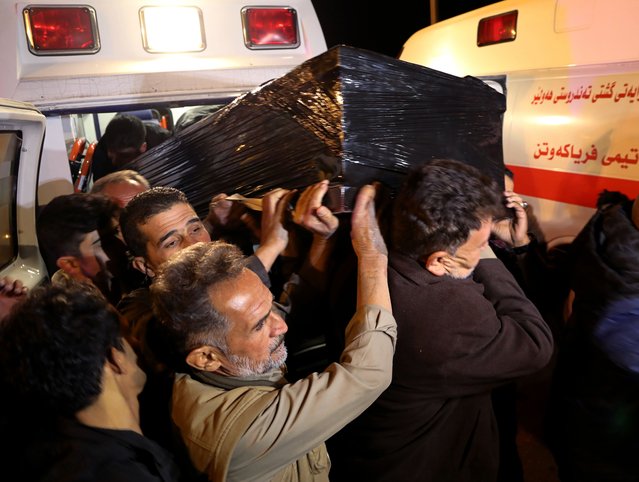 The body of Gaylan Delir Ismael, 25, from Iraq's Kurdish region, arrives at Irbil Airport, Iraq, early Monday, November 15, 2021. Like thousands of other Iraqis and Syrians, Gaylan had traveled to Belarus on an easily obtained tourist visa in the hope of getting to Germany and starting a new life. But he never made it there, dying in a dark and soggy forest on the Belarus-Poland border. (Photo by AP Photo/Stringer) 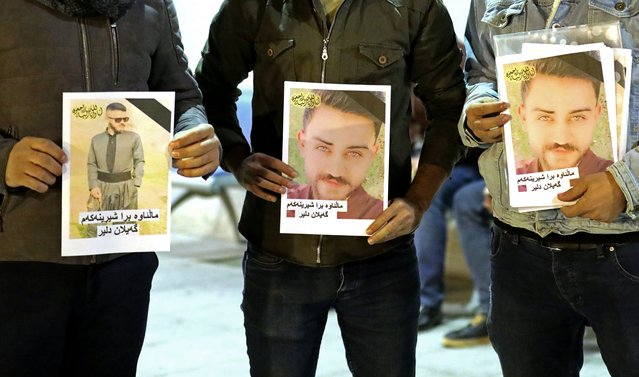 Family members of Gaylan Delir Ismael, 25, from Iraq's Kurdish region, hold his picture while waiting for his body to arrive at Irbil airport, Iraq, Sunday, November 14, 2021. (Photo by AP Photo/Stringer) 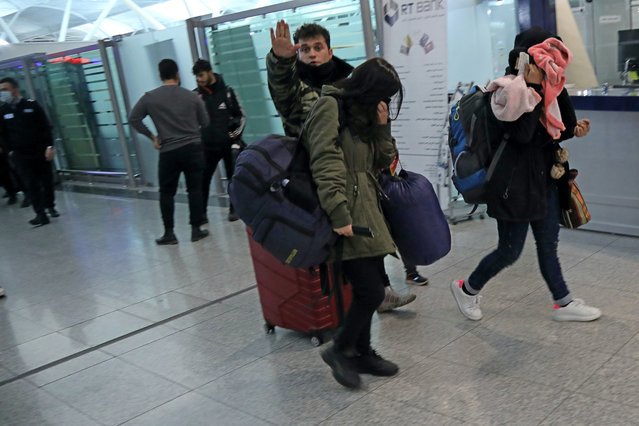 Iraqi migrants arrive to the airport in Irbil, Iraq, early Friday, November 26, 2021. 170 Iraqi nationals returned home Friday from Belarus in a repatriation process that came after tensions at Poland's eastern border, where thousands of migrants became stuck in a cold and soggy forest. (Photo by Hussein Ibrahim/AP Photo) 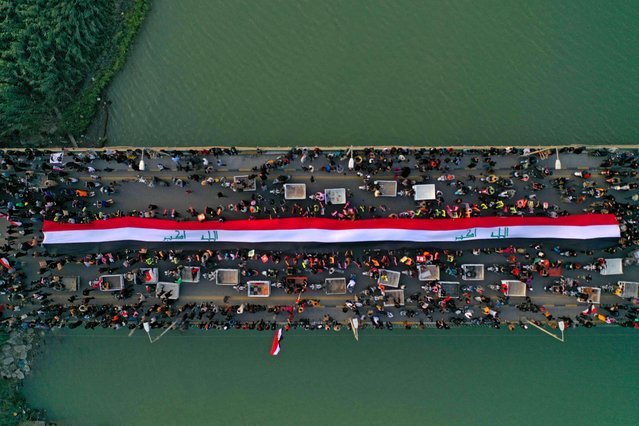 An aerial view shows Iraqis, carrying posters of killed anti-government protesters, attend a march to honour the memory of the protesters, killed in protests in 2019, at the Zeitoun bridge, near Habboubi Square in Iraq's southern city of Nasiriyah in Dhi Qar province on November 28, 2021. (Photo by Asaad Niazi/AFP Photo) 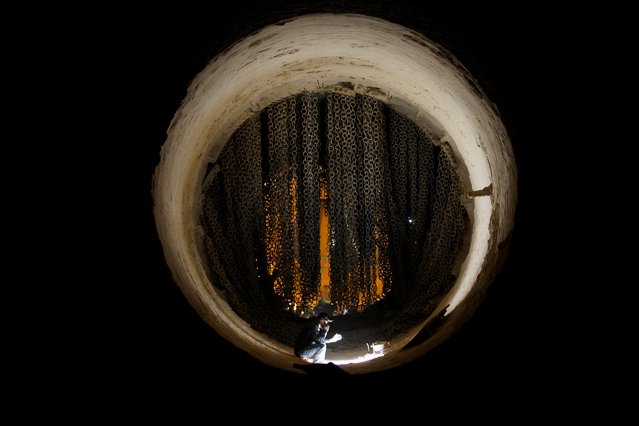 A worker is seen in a furnace pipe at a cement plant in Najaf, Iraq, December 1, 2021. (Photo by Alaa Al-Marjani/Reuters) 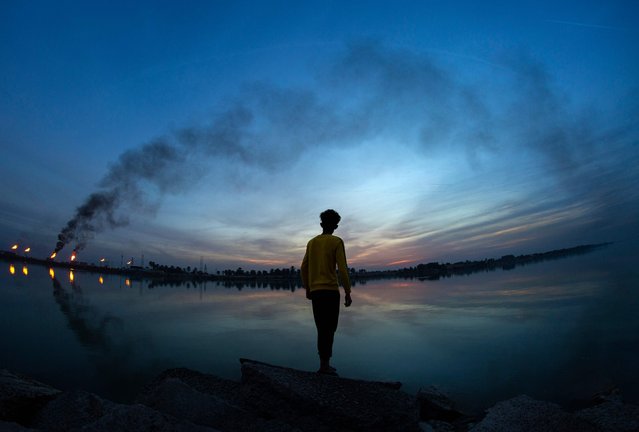 An Iraqi youth stands on the bank of the Shatt al-Arab waterway in the Nahr Bin Omar village, as flare stacks burn in the eponymous oil field and installation across the water, in Iraq's southern Basra governorate, on December 5, 2021. (Photo by Hussein Faleh/AFP Photo) 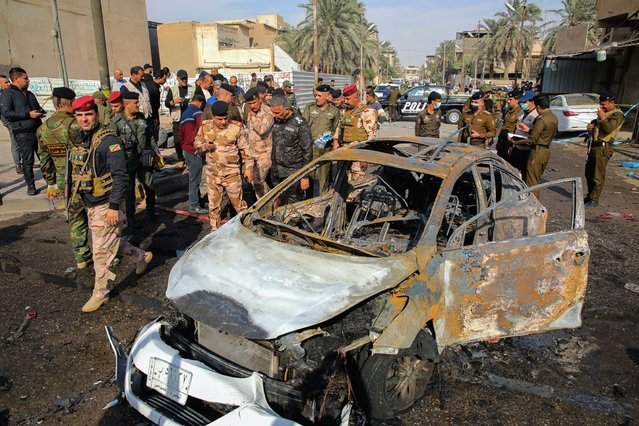 Iraqi security forces inspect the site of an explosion in Basra, Iraq, Tuesday, December 7, 2021. The explosion rocked the center of Iraq’s southern city of Basra, killing at least four people and wounding several others. Local news reports initially reported a car bomb, but the governor of Basra told reporters on the scene that a motorcycle had exploded. (Photo by Nabil al-Jurani/AP Photo) 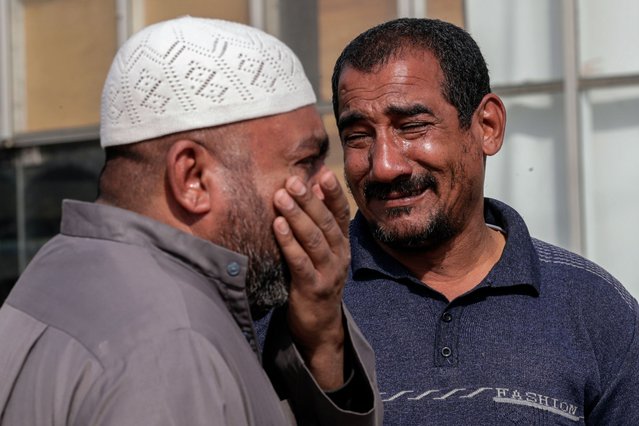 People react at the site of an explosion in Basra, Iraq, Tuesday, December 7, 2021. (Photo by Nabil al-Jurani/AP Photo) 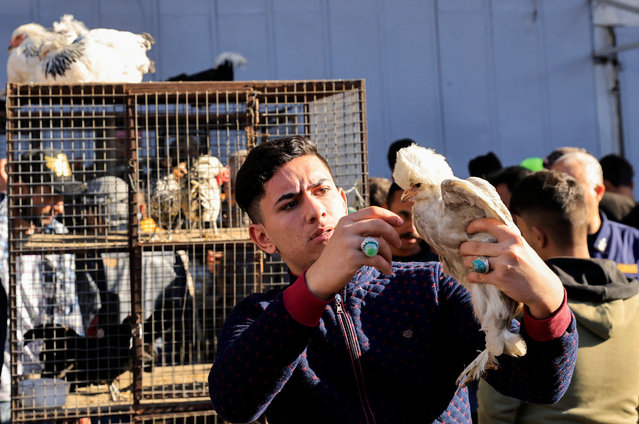 A man holds a bird at al-Ghazal animal market in Baghdad, Iraq on December 10, 2021. (Photo by Thaier Al-Sudani/Reuters) 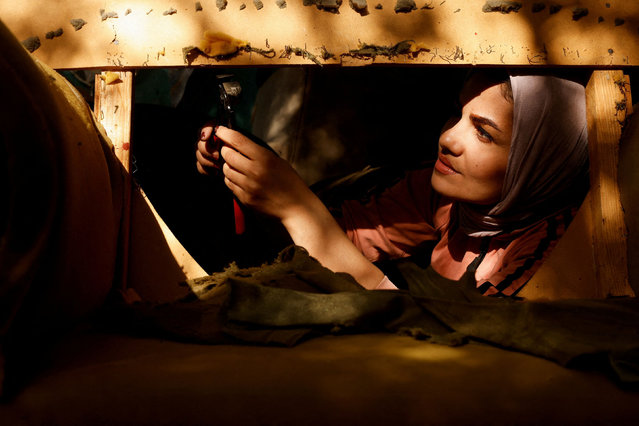 Noor Al-Janabi, 28, an Iraqi woman carpenter, repairs a furniture in the garage of her home in Baghdad, Iraq on December 13, 2021. (Photo by Saba Kareem/Reuters) 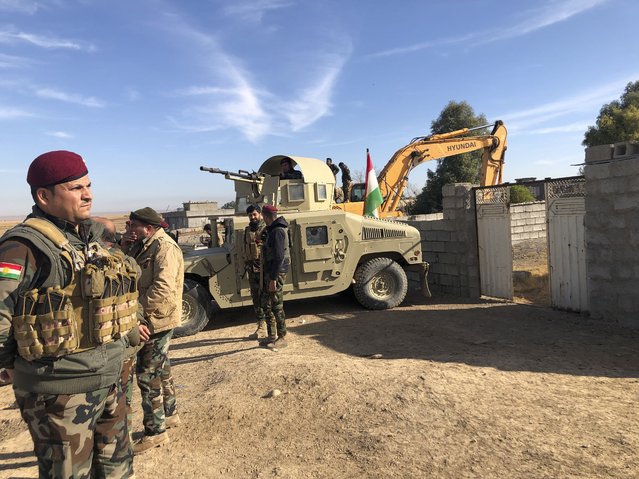 Kurdish Peshmerga forces oversee digging of defensive trenches in the village of Lheiban , Iraq, Tuesday, December 7, 2021. For the first time since the defeat of Islamic State, federal Iraqi forces and Kurdish peshmerga are coordinating to close security gaps along a disputed zone in northern Iraq, as part of their ongoing fight against the militants. (Photo by Samya Kullab/AP Photo) 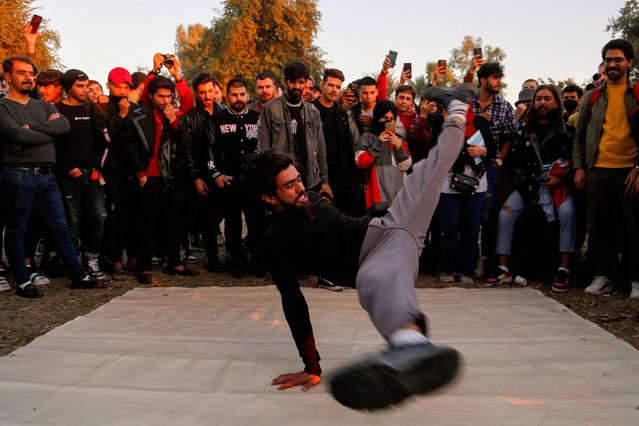 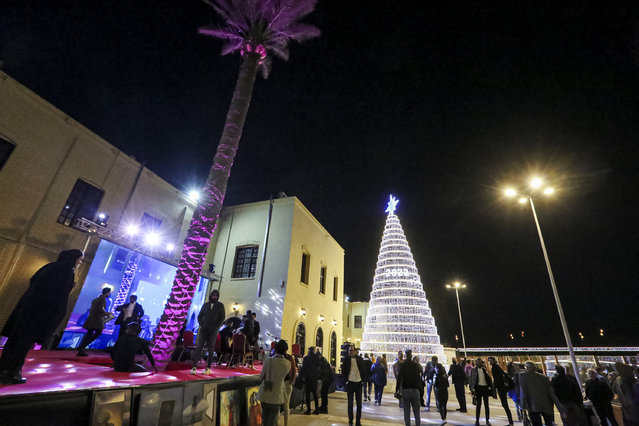 People walk past an installation depicting a Christmas tree made of lights and marking the new year 2022 during the reopening of the renovated al-Mutanabbi street, the historic heart of the book trade and an outlet for writers and intellectuals, in the centre of Iraq's capital Baghdad on December 25, 2021. (Photo by Sabah Arar/AFP Photo) 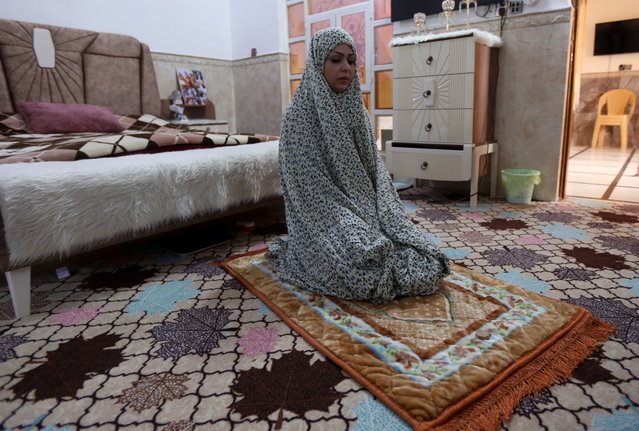 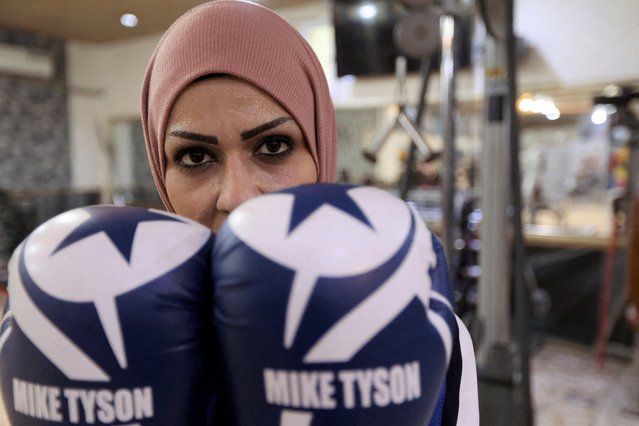 Bushra Abdul Zahra, a 36-year-old Iraqi local boxing and karate practitioner, poses for the camera at a gym in Najaf, Iraq on December 24, 2021. (Photo by Alaa Al-Marjani/Reuters) 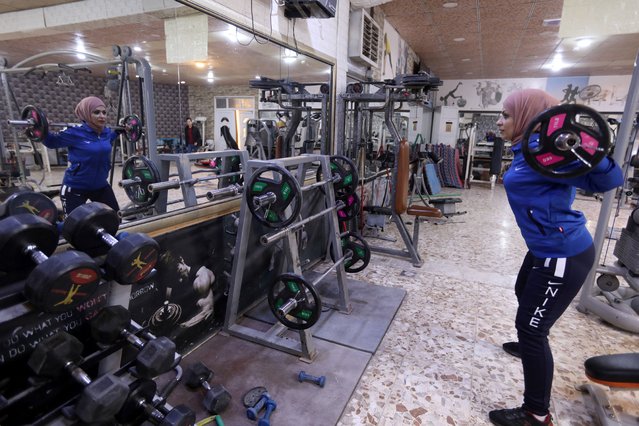 Bushra Abdul Zahra, a 36-year-old Iraqi local boxing and karate practitioner, trains with weights at a gym in Najaf, Iraq on December 24, 2021. (Photo by Alaa Al-Marjani/Reuters) 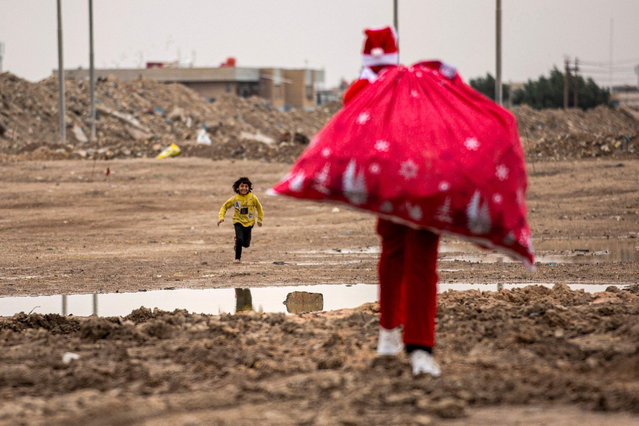 A child runs towards Mohamed Maarouf, 28, as he walks with a sack of gifts while dressed in Saint Nicholas (Santa Claus) costume in a slum near the centre of Iraq's southern city of Basra on December 24, 2021. (Photo by Hussein Faleh/AFP Photo)
Edit Del
30 Dec 2021 07:01:00, post received 0 comments
Publication archive:
←   →
Popular tags:
All tags
Last searches: