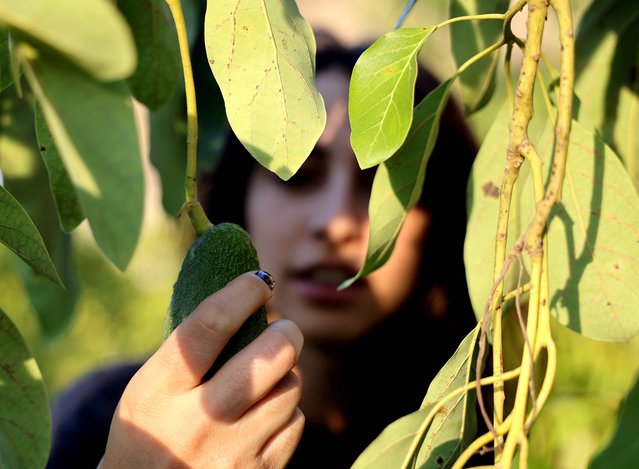 Lebanese Thurayya, 28, inspects her avocado trees in the village of Sinay, south of Beirut, on November 22, 2021. Thurayya left the Beirut neighbourhood where she was born and moved to the family farm, not as an environmental fad but forced by Lebanon's bruising crises. (Photo by Joseph Eid/AFP Photo) 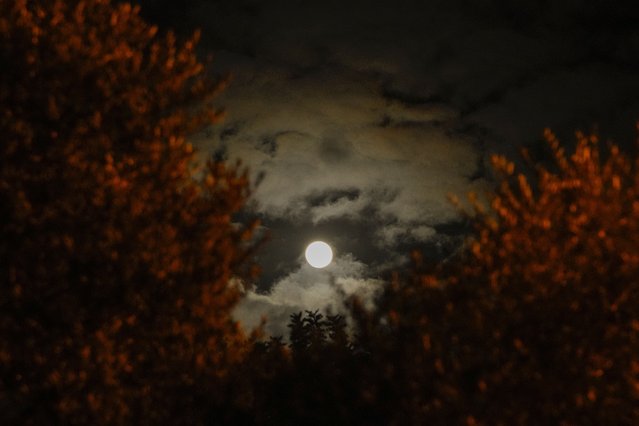 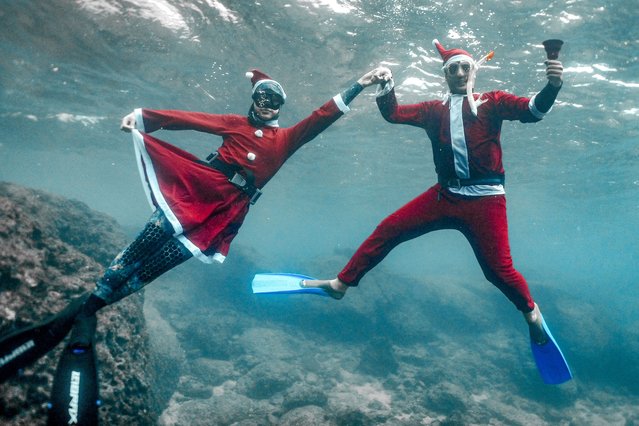 Freedivers dressed in Saint Nicholas (Santa Claus) costumes pose for a picture while submerged under water off the coast of Lebanon's northern city of Batroun on Christmas eve on December 24, 2021. (Photo by Ibrahim Chalhoub/AFP Photo) 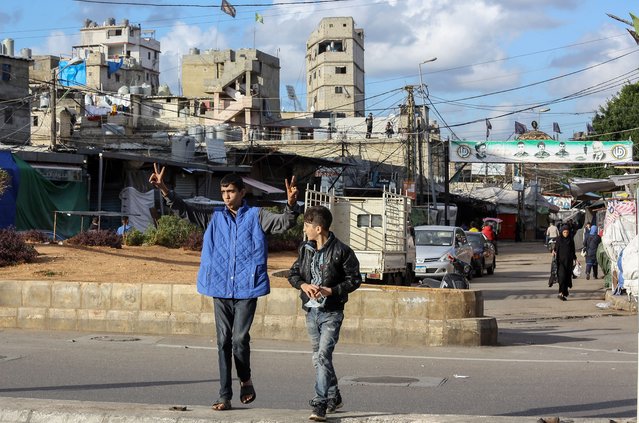 A view of the entrance Sabra Palestinian camp at southern suburb area of Beirut, Lebanon, 15 January 2021. Lebanon on 07 January began a complete 25-day closure nationwide, before announcing a comprehensive closure from 14 January with no exceptions but the health, security and press sectors to help stop the spread of the Coronavirus. (Photo by Nabil Mounzer/EPA/EFE) 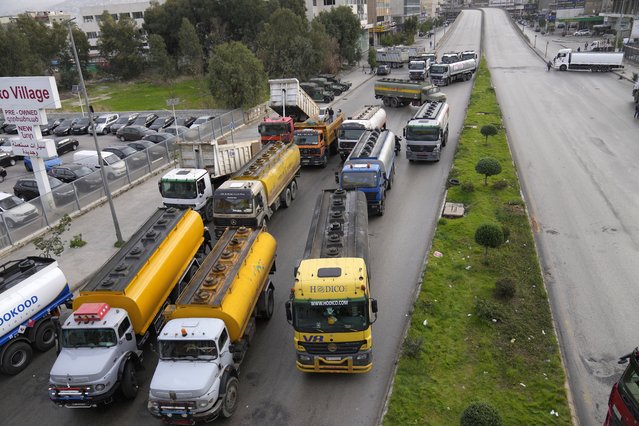 Tanker trucks block a main highway during a general strike by public transport and labor unions to protest the country's deteriorating economic and financial conditions in Beirut, Lebanon, Thursday, January 13, 2022. Protesters closed the country's major highways as well as roads inside cities and towns starting 5 a.m. making it difficult for people to move around. (Photo by Hussein Malla/AP Photo) 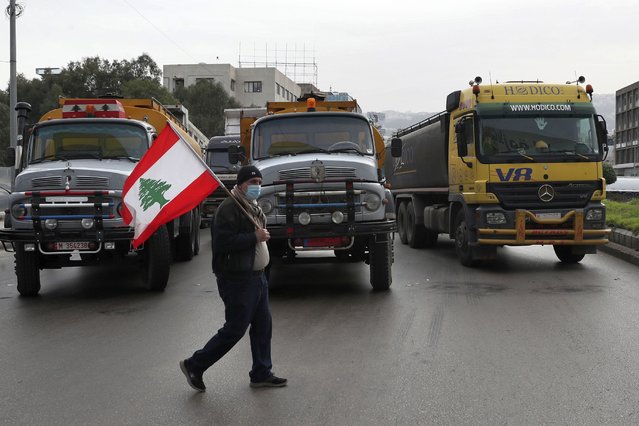 A truck driver holds a Lebanese flag as others drivers block a main highway with their vehicles during a general strike by public transport and workers unions paralyzed Lebanon in protest to the country's deteriorating economic and financial conditions, in Beirut, Lebanon, Thursday, January 13, 2022. (Photo by Bilal Hussein/AP Photo) 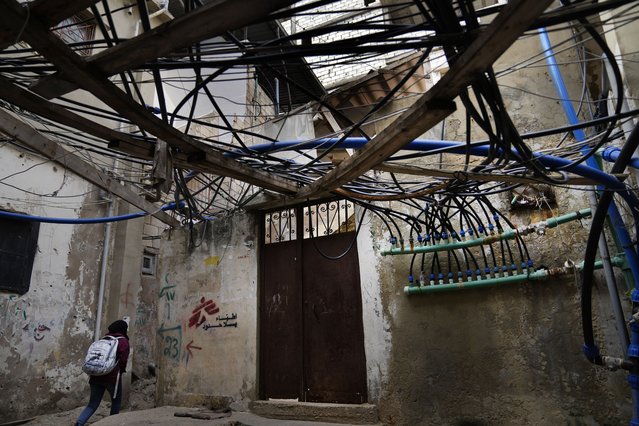 A Palestinian student walks under improvised water pipes and power cables in an alley in the Bourj al-Barajneh Palestinian refugee camp, in Beirut, Lebanon, Tuesday, January 18, 2022. The agency for Palestinian refugees, or UNRWA, appealed Wednesday to the international community to donate tens of millions of dollars to help improve living conditions for Palestinians in crisis-hit Lebanon. UNWRA is asking for an additional $87.5 million to provide Palestinian refugees with cash assistance to the poorest, cover hospital expenses, as well as transportation for children so that they can go to school. (Photo by Hussein Malla/AP Photo) 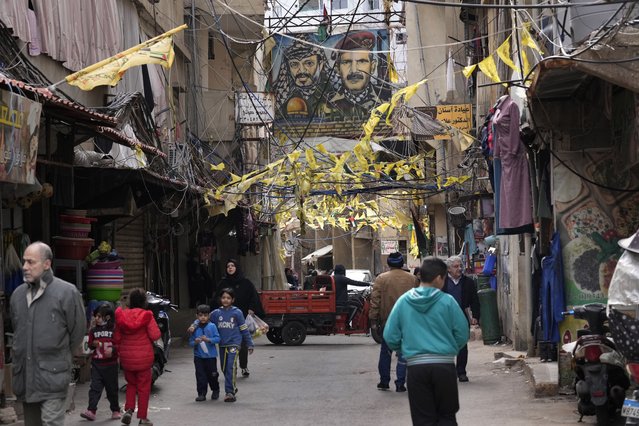 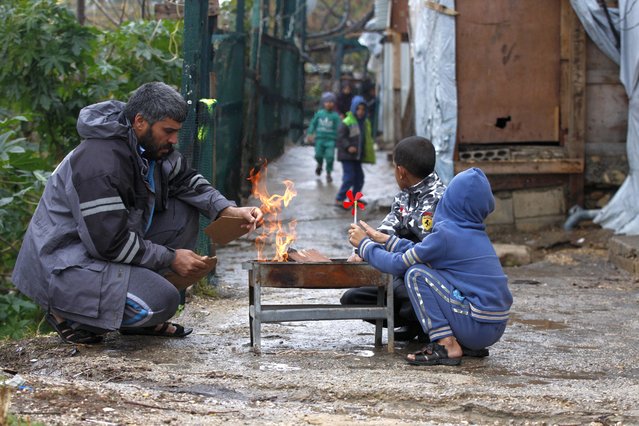 A displaced Syrian family warms themselves around a fire at a refugee camp in the southern port city of Sidon, Lebanon, Wednesday, January 19, 2022. A snowstorm in the Middle East has left many Lebanese and Syrians scrambling to find ways to survive. Some are burning old clothes, plastic and other hazardous materials to keep warm as temperatures plummet and poverty soars. (Photo by Mohammed Zaatari/AP Photo) 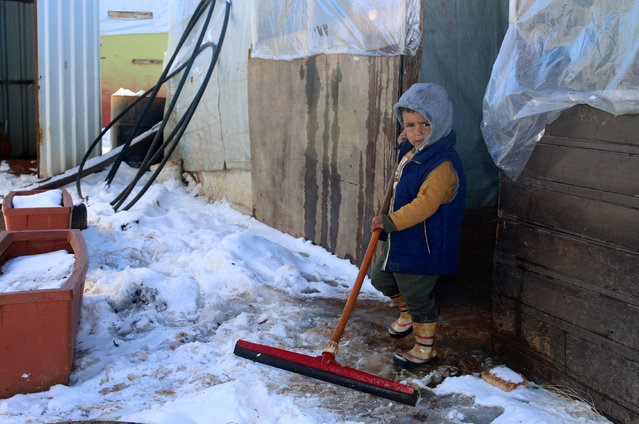 A Syrian boy clears snow from the entrance of a tent in the Syrian refugees camp of al-Hilal in the village of al-Taybeh near Baalbek in Lebanon's Bekaa valley on January 20, 2022. (Photo by AFP Photo/Stringer Network) 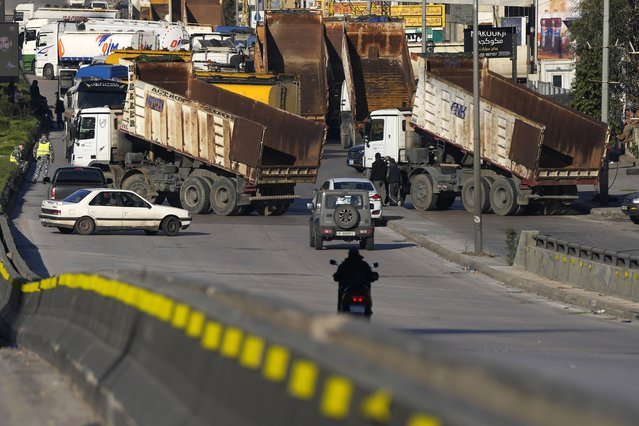 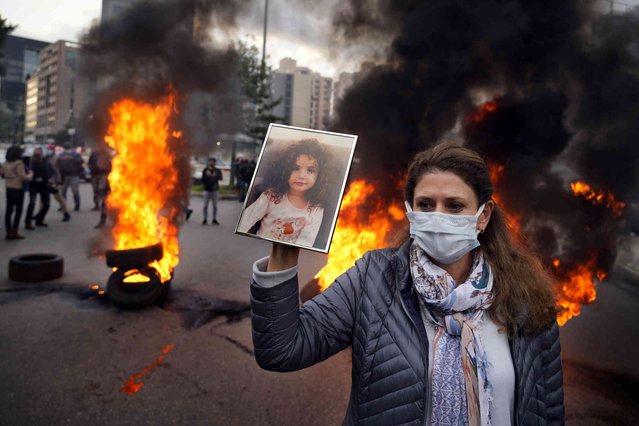 A woman holds a picture of her granddaughter, who was killed in the deadly 2020 Beirut port explosion, as others burn tires to block a road during a demonstration outside the Justice Palace in support of the judge investigating the blast after he was forced to suspend his work, in Beirut, Lebanon, Monday, February 7, 2022. (Photo by Bilal Hussein/AP Photo) 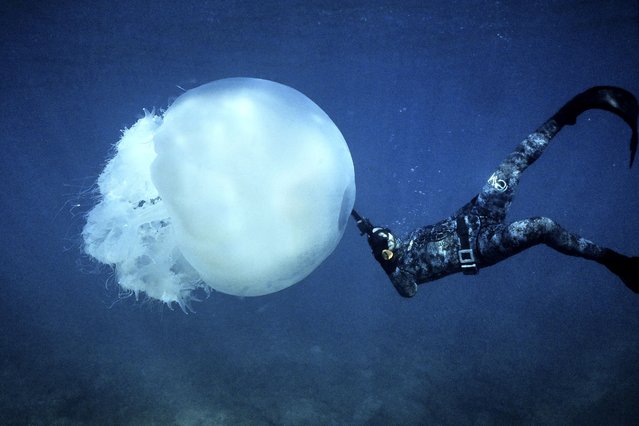 A free-diver swims near a big jellyfish off the coast of Lebanon's northern city of Batroun, on February 13, 2022. (Photo by Ibrahim Chalhoub/AFP Photo) 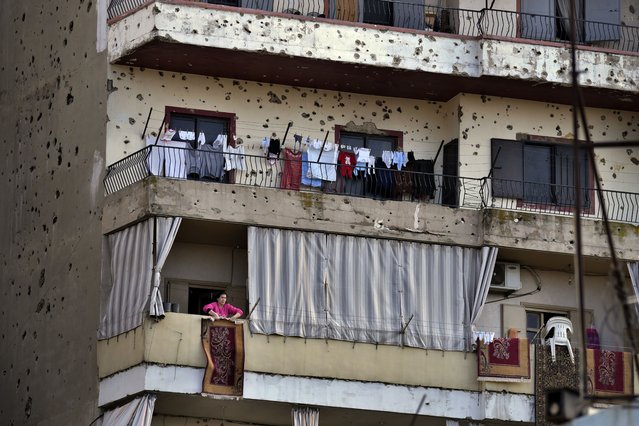 A woman hangs a rug on her balcony riddled by bullets from clashes between pro and anti-Syrian government groups, in Tripoli, Lebanon, February 16, 2022. Often known in recent years for sectarian and other violence, Tripoli seems an unlikely place for a cultural revival, but it has a long cinematic tradition, once boasting 35 movie houses and Lebanon's first cinema. Kassem Istanbouli, a 35-year-old actor and director is now seeking to restore some of that past glory by turning the city’s long abandoned Empire Cinema into a national theater. (Photo by Bilal Hussein/AP Photo) 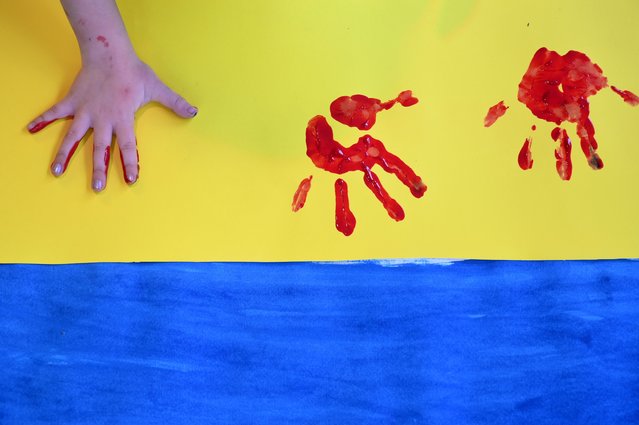 An Ukrainian child stamps her red painted hand on the Ukrainian flag during a protest outside the Russian embassy in Beirut, Lebanon, 24 February 2022. Dozens of the Ukrainian community protest outside the Russian embassy to denounce Russia's military operation of Ukraine. Russian troops launched a major military operation on Ukraine on 24 February, after weeks of intense diplomacy and the imposition of Western sanctions on Russia aimed at preventing an armed conflict in Ukraine. (Photo by Wael Hamzeh/EPA/EFE) 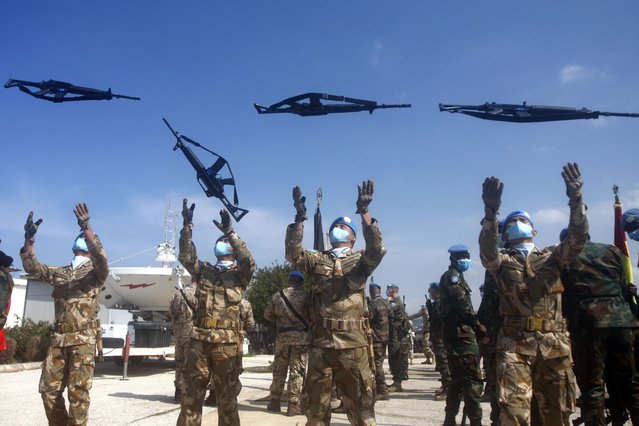 Indonesian U.N peacekeepers toss their rifles in the air during a ceremony to mark the transfer of authority between the outgoing and the newly appointed head of the mission at the UNIFIL headquarters in the southern Lebanese town of Naqoura, Lebanon, Monday, February 28, 2022. (Photo by Mohammed Zaatari/AP Photo) 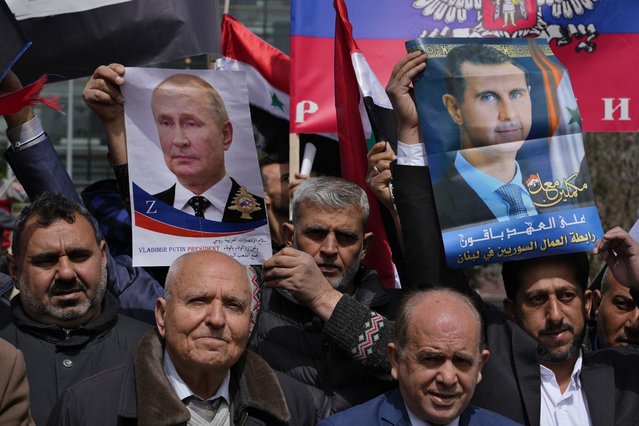 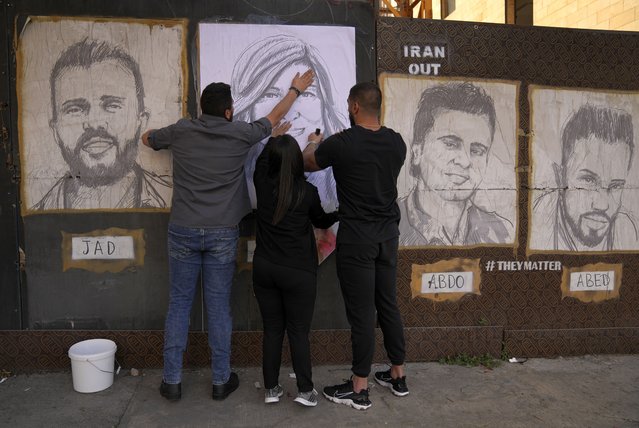 Relatives of victims of the Aug. 4, 2020 Beirut port explosion hang portraits of their loved ones who died in the explosion, during a gathering to mark twenty months since the blast that killed more than 200 people and injured thousands, in downtown Beirut, Lebanon, Monday, April 4, 2022. (Photo by Hussein Malla/AP Photo) 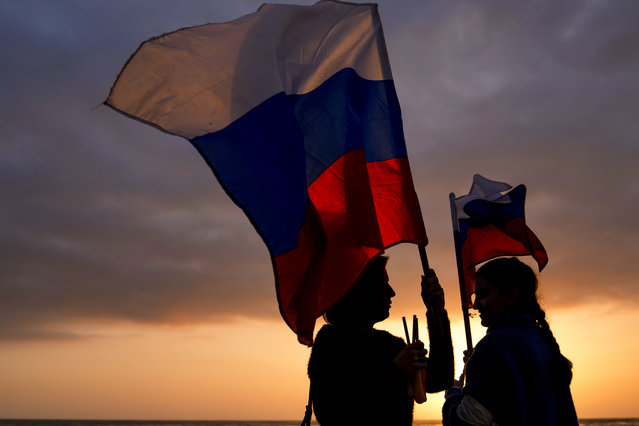