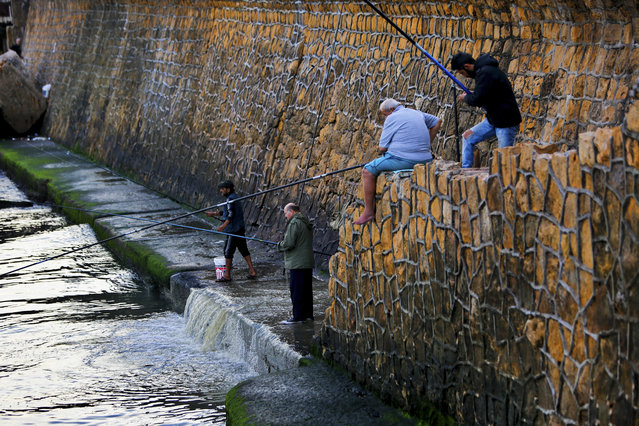 In this Wednesday, November 14, 2018, photo, people fish next to a sewage overflow pipe emptying into the Mediterranean Sea along the Beirut coastline, Lebanon. Environmentalists say thousands of tons of trash and untreated waste is getting dumped directly into the sea. (Photo by Hassan Ammar/AP Photo) 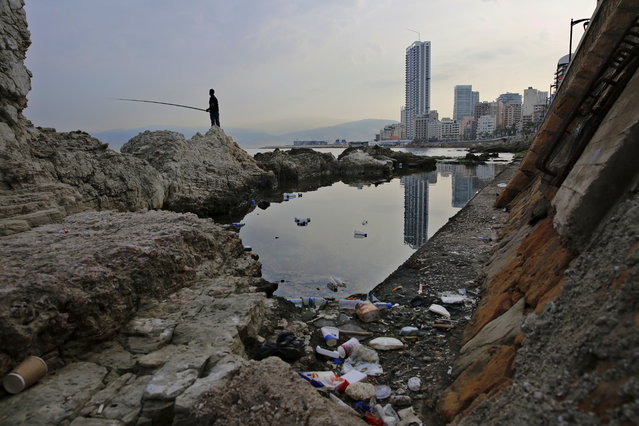 In this Wednesday, November 14, 2018 photo, a man casts his fishing pole in the Mediterranean Sea as trash are seen on a rocky coastal area along the Beirut coastline, Lebanon. Fisherman Ahmad Obeitri, who has been a fixture at Lebanon’s corniche for the past 30 years, says the trash is killing off what’s left of marine life. “These days if a fish comes our way it will only find nylon bags, garbage and sewage to feed on”, he said, lamenting the people who eat and drink as they walk on the corniche and then toss their cans, tins and other containers in the sea. “You can open a cafe under water and invite your friends”, he adds sarcastically. (Photo by Hassan Ammar/AP Photo) 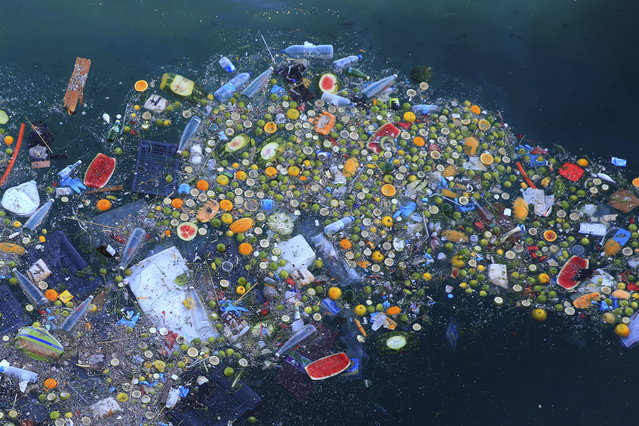 In this Thursday, September 29, 2016 photo, trash floats next to rocky coastal area in the Mediterranean Sea on the Beirut coastline, Lebanon. Once a source of pride, the country’s Mediterranean coastline has become a source of shame for many Lebanese because of the swirling trash that pollutes its shores. (Photo by Hassan Ammar/AP Photo) 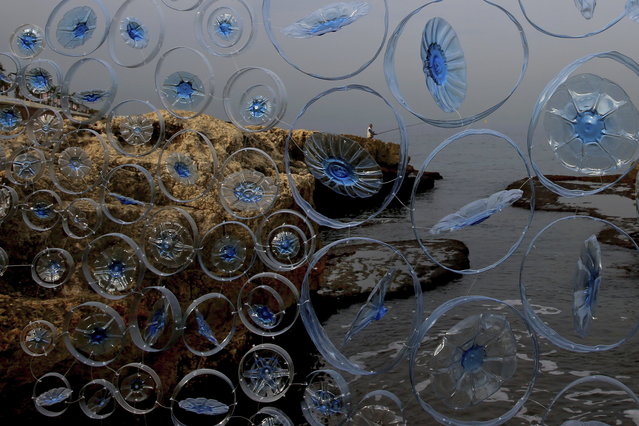 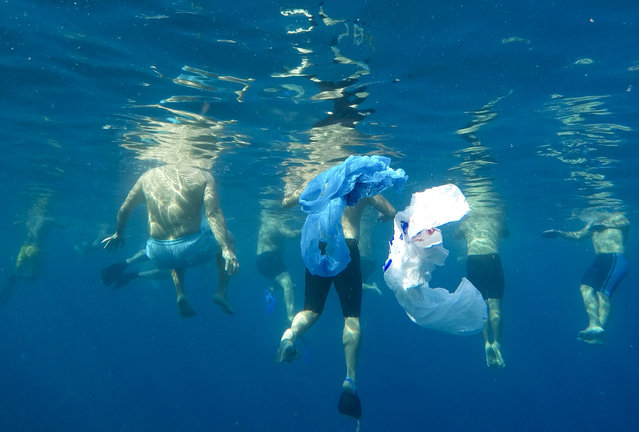 In this Sunday, November 18, 2018, photo, plastic bags float as swimmers prepare to emulate sea creatures in an effort to send a message that pollutants such as bottles and plastic bags will entangle marine animals, next to the rocky coastal area in the Mediterranean Sea on the Beirut coastline, Lebanon. (Photo by Hassan Ammar/AP Photo) 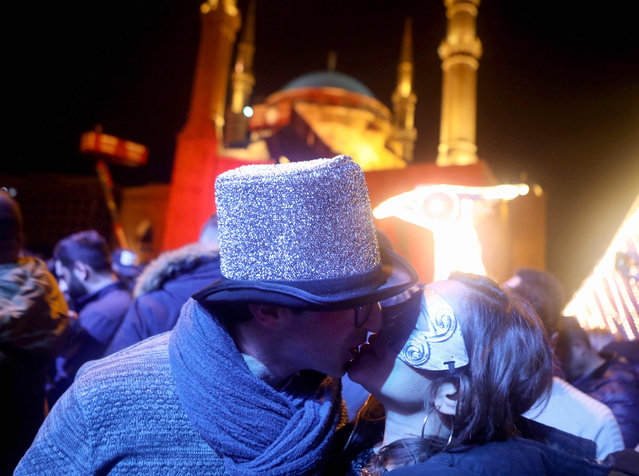 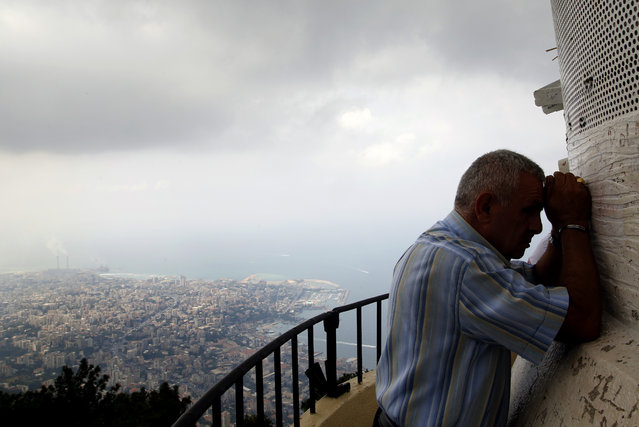 A pilgrim prays at the feet of a shrine to the Virgin Mary in Harissa, near Beirut, Lebanon, Lebanon, Friday, September 6, 2019. The pilgrimage site with the statue of Virgin Mary is about 15 tons of bronze, painted in white and is also known as “Our Lady of Lebanon”. (Photo by Amr Nabil)/AP Photo 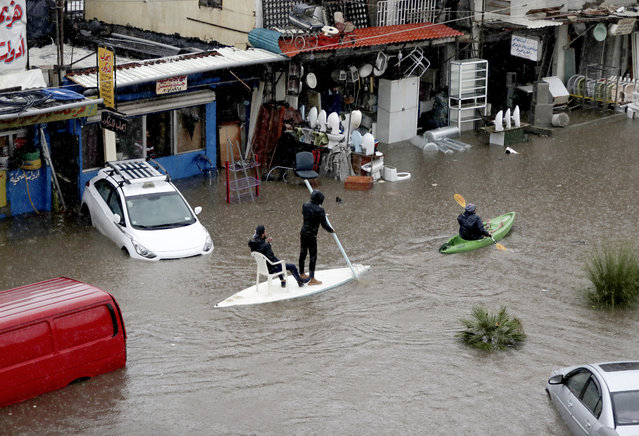 Lebanese men use a paddle board and canoe as means of transportation on a flooded road due to heavy rain, at the southern entrance of the capital Beirut on December 9, 2019. (Photo by Anwar Amro/AFP Photo) 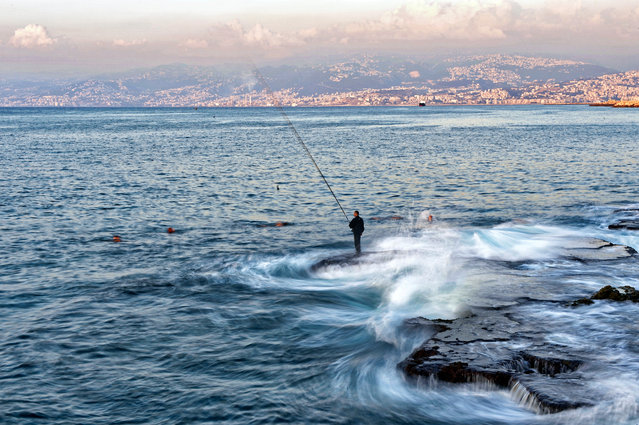 A photograph taken with a low shutter speed shows a fishing man during a sunny day at the Corniche al-Manara in Beirut, Lebanon,​ 16 September 2019. (Photo by Wael Hamzeh/EPA/EFE) 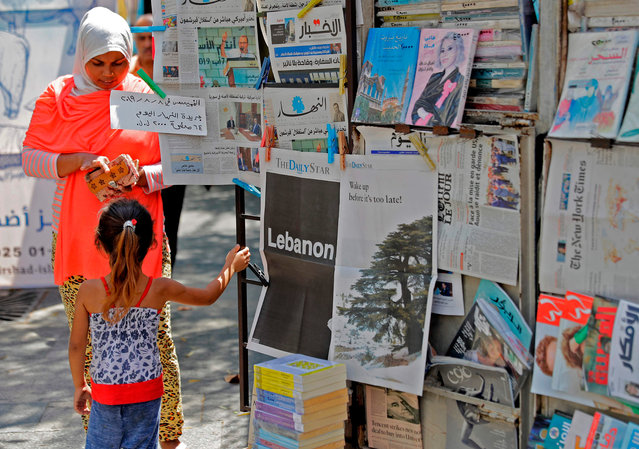 A girl stands next to a copy of the Lebanese local English-language newspaper “The Daily Star” in the capital Beirut on August 8, 2019, which refrained from publishing news articles in its print edition today in protest against the “deteriorating situation” in Lebanon. A special edition was printed with each page listing one main issue dragging the country toward the abyss. Despite the worsening political, economic, financial and social problems, there is still time to save the country, the Daily Star, which was first established in the 1950s, announced. (Photo by Joseph Eid/AFP Photo) In this Monday, December 23, 2019, photo, a volunteer serves food at a public Christmas dinner, as an initiative to help those in need, in Martyrs Square where anti-government activists are encamped in Beirut, Lebanon. Lebanon is entering its third month of protests, the economic pinch is hurting everyone, and the government is paralyzed. So people are resorting to what they've done in previous crises: They rely on each other, not the state. (Photo by Maya Alleruzzo/AP Photo) 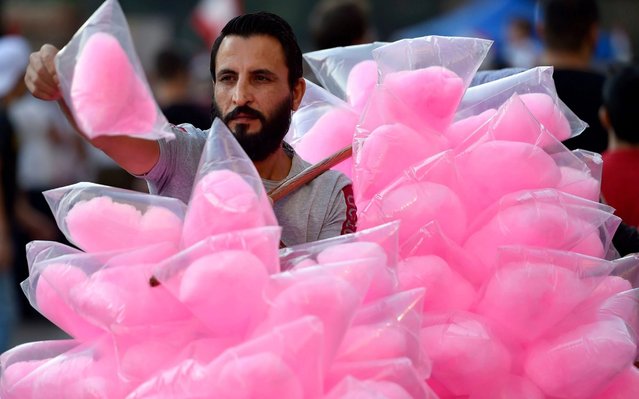 A vendor sells cotton candy during ongoing anti-government protests in downtown Beirut, Lebanon, 11 November 2019. Protests in Lebanon are continuing since first erupted on 17 October, as protesters aim to apply pressure on the country's political leaders over what they view as a lack of progress following the resignation of Prime Minister Saad Hariri on 29 October. (Photo by Wael Hamzeh/EPA/EFE) 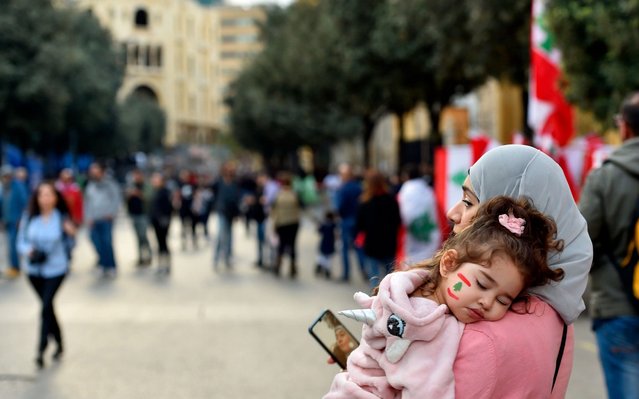 A woman carries her daughter during a protest in downtown Beirut, Lebanon, 01 December 2019. Protests in Lebanon are continuing since first erupted on 17 October, as protesters aim to apply pressure on the country's political leaders over what they view as a lack of progress following the prime minister's resignation on 29 October. (Photo by Wael Hamzeh/EPA/EFE) 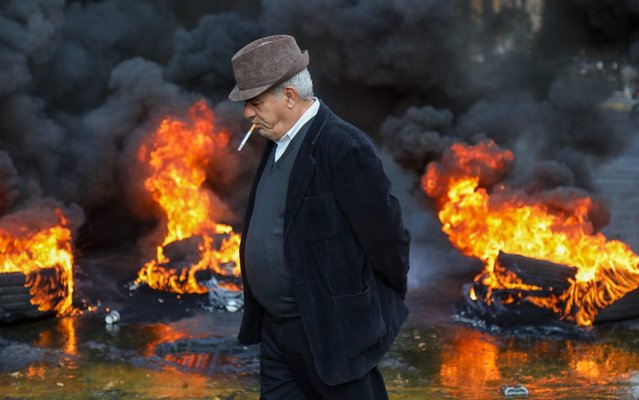 A man crosses a road blocked by burning tyres in the capital Beirut on January 22, 2020. Lebanon ended a painful wait by unveiling a new cabinet line-up, but the government was promptly scorned by protesters and faces the Herculean task of saving a collapsing economy. (Photo by Ibrahim Amro/AFP Photo) 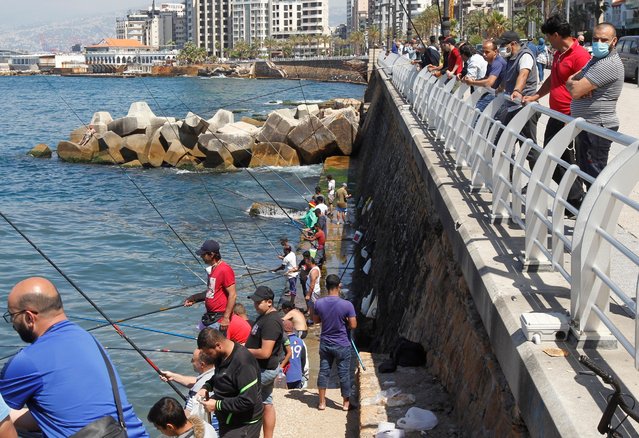 Fishermen dangle their lines to catch fish at Beirut's seaside Corniche, as Lebanese authorities warned of a new wave of the coronavirus disease (COVID-19) as the numbers jumped to the highest point in more than a month, after the government eased some restrictions on public life, in Beirut, Lebanon on May 10, 2020. (Photo by Mohamed Azakir/Reuters) A man throws water on a girl playing in a pool, during a hot weather, amid concerns over the spread of coronavirus disease (COVID-19), in Sidon, southern Lebanon on May 21, 2020. (Photo by Ali Hashisho/Reuters) 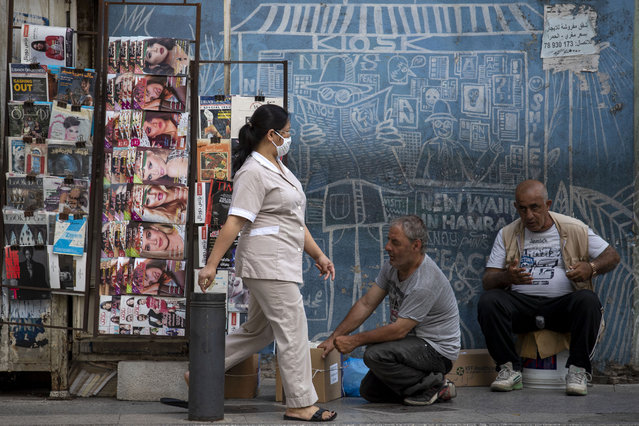 A maid from the Philippines wears a mask to help stop the spread of the new coronavirus as she walks in front of a newspaper kiosk in central Beirut's commercial Hamra Street, in Beirut, Lebanon, Wednesday, May 20, 2020. (Photo by Hassan Ammar/AP Photo) 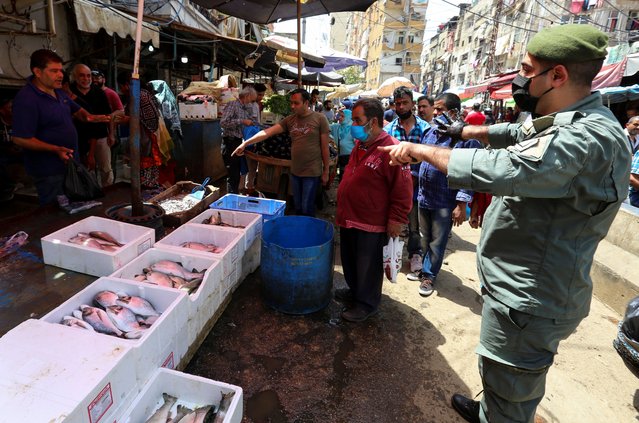 People shop at a crowded souk as Lebanon's government ordered most of the country to shut down again for four days, starting on Wednesday night, to ward off a coronavirus disease (COVID-19) resurgence after easing some restrictions, in Sabra, Beirut suburbs, Lebanon on May 13, 2020. (Photo by Aziz Taher/Reuters) 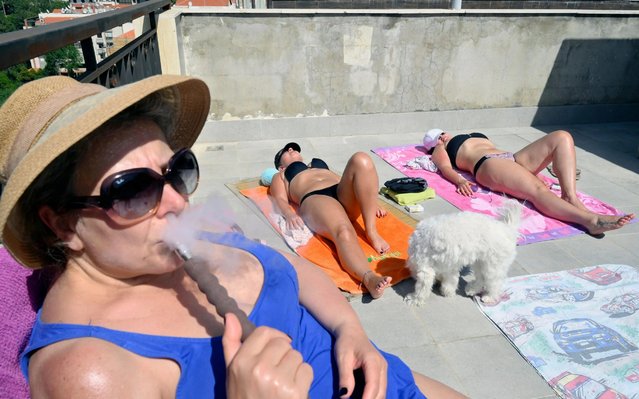 Lebanese women and their dog take advantage of good weather to sunbathe on the rooftop of their home in Mansourieh Village near Beirut, Lebanon, 12 May 2020. during a nationwide coronavirus lockdown. Rooftops, usually a normal place for water tanks, satellites dishes and unwanted home accessories, has become a new place for people seeking social distance and isolation during the pandemic. According to the government's decision, Lebanon will go under full shutdown for four days on 14 until 17 May 2020, as the country recorded a rise in coronavirus cases. (Photo by Wael Hamzeh/EPA/EFE/Rex Features/Shutterstock) 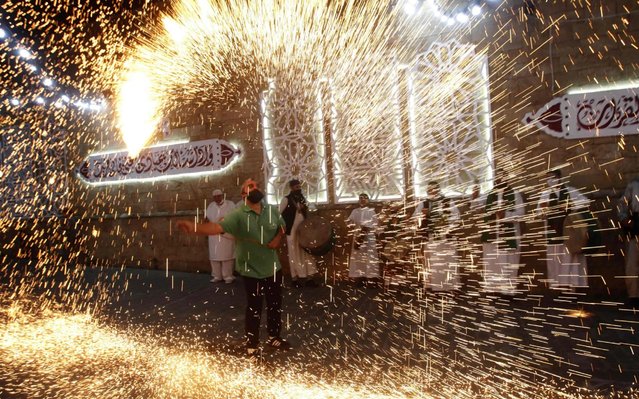 Sufi musicians perform during a Ramadan traditional evening held in the southern Lebanese port city of Sidon late on May 14, 2020 for people confined in their homes due to measures imposed across Lebanon to control the spread of the novel coronavirus. Throughout the Muslim holy month of Ramadan, Muslims are required to abstain from food, drink and other pleasures from dawn to dusk. (Photo by Mahmoud Zayyat/AFP Photo)
Edit Del
24 May 2020 00:05:00, post received 0 comments
Publication archive:
←   →
Popular tags:
All tags
Last searches: