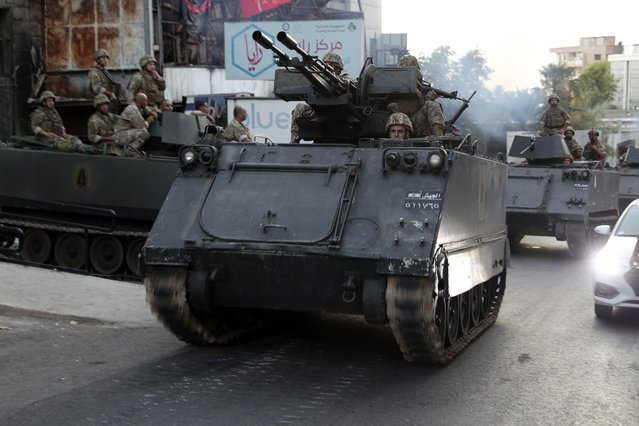 Lebanese army soldiers sit on their armored vehicles as they deployed to contain the tension after heavy fire in the coastal town of Khaldeh, south of Beirut, Lebanon, Sunday, August 1, 2021. At least two people were killed on Sunday south of the Lebanese capital when gunmen opened fire at the funeral of a Hezbollah commander who was killed a day earlier, an official from the group said. (Photo by Bilal Hussein/AP Photo) 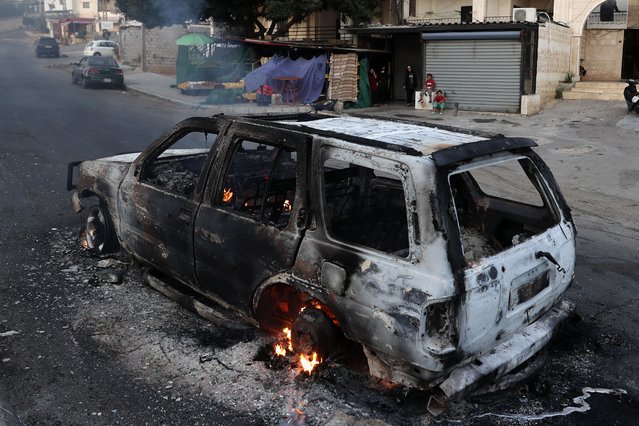 A family looks at a burning car after heavy clashes in the coastal town of Khaldeh, south of Beirut, Lebanon, Sunday, August 1, 2021. (Photo by Bilal Hussein/AP Photo) 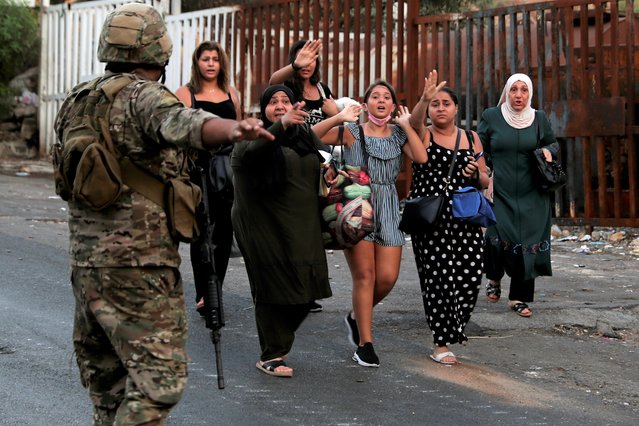 People carry their belongings as they flee their houses after heavy clashes in the coastal town of Khaldeh, south of Beirut, Lebanon, Sunday, August 1, 2021. (Photo by Bilal Hussein/AP Photo) 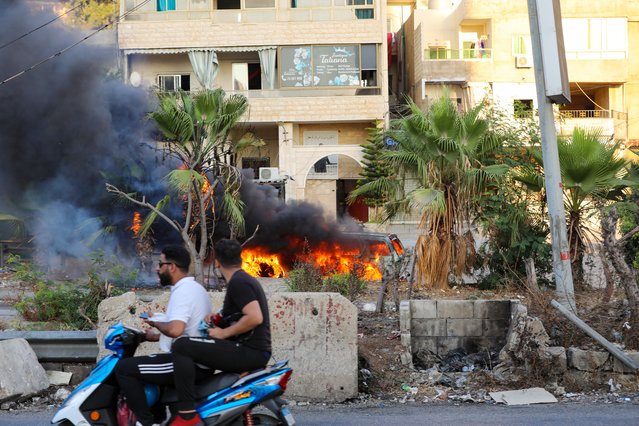 Lebanese men ride a motorcycle past a vehicle following clashes in the Khalde area, south of the capital, on August 1, 2021. At least five people including three Hezbollah members were killed south of Beirut when a funeral procession for a party member was ambushed, a Lebanese security source told AFP, adding that several people were wounded in the exchange of fire in the Khalde area between members of the Lebanese Shiite group and Sunni residents. (Photo by Anwar Amro/AFP Photo) 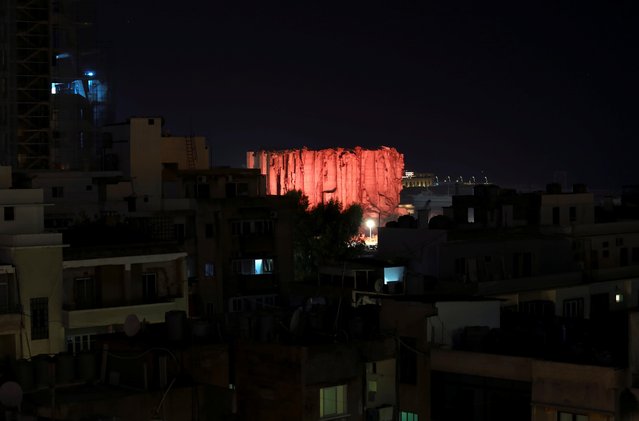 The grain silo that was damaged during Aug. 4, 2020 explosion in Beirut's port, is illuminated on the eve of blast anniversary, in Beirut, Lebanon on August 3, 2021. (Photo by Emilie Madi/Reuters) 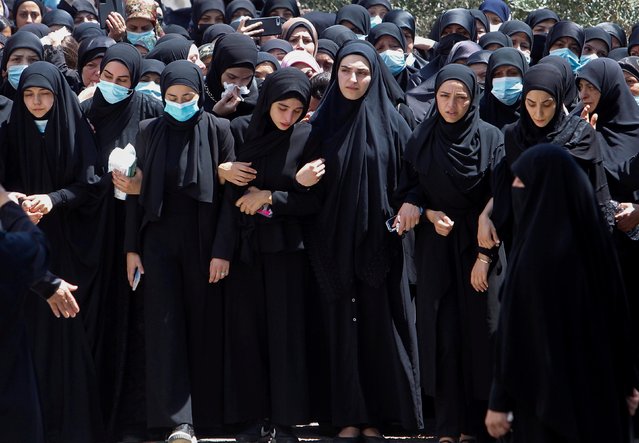 Women mourn during the funeral of Hezbollah member Ali Shibli, who was killed on Saturday, in the village of Kunin, southern Lebanon on August 2, 2021. (Photo by Aziz Taher/Reuters) 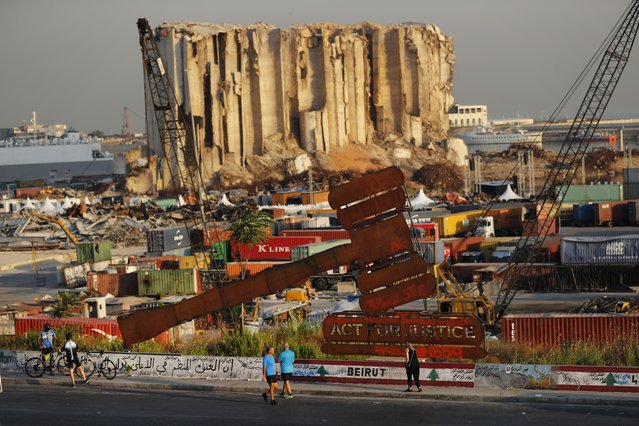 People pass next of a justice symbol monument that sits in front of towering grain silos gutted in the massive August 2020 explosion at the Beirut port that claimed the lives of more than 200 people, in Beirut, Lebanon, Wednesday, August 4, 2021. A year after the deadly blast, families of the victims are consumed with winning justice for their loved ones and punishing Lebanon's political elite, blamed for causing the disaster through their corruption and neglect. (Photo by Hussein Malla/AP Photo) 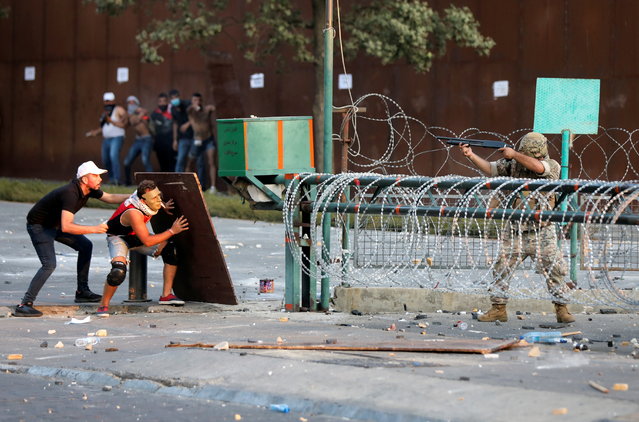 Demonstrators take cover during clashes with security forces during a protest near parliament, as Lebanon marks the one-year anniversary of the explosion in Beirut, Lebanon on August 4, 2021. (Photo by Mohamed Azakir/Reuters) 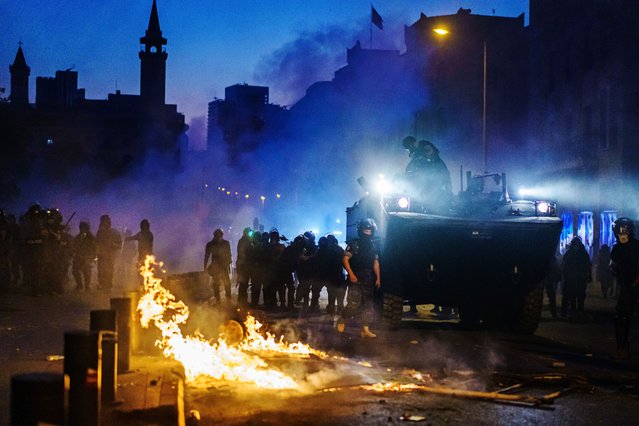 Lebanese police, in riot gear and vehicles, march forward as they push back violent anti-government protesters who tried to storm the compound near the Parliament area, shortly after thousands of peaceful demonstrators attended a grim anniversary event nearby to commemorate the deadly Beirut port explosion that killed more than 200 people in Beirut, Lebanon, Wednesday, August 4, 2021. The one year anniversary comes after the country has suffered an unprecedented economic crisis, currency devaluation, and a political deadlock which has left the Lebanon without a proper functioning government for the past year. (Photo by Marcus Yam/Los Angeles Times/Rex Features/Shutterstock) 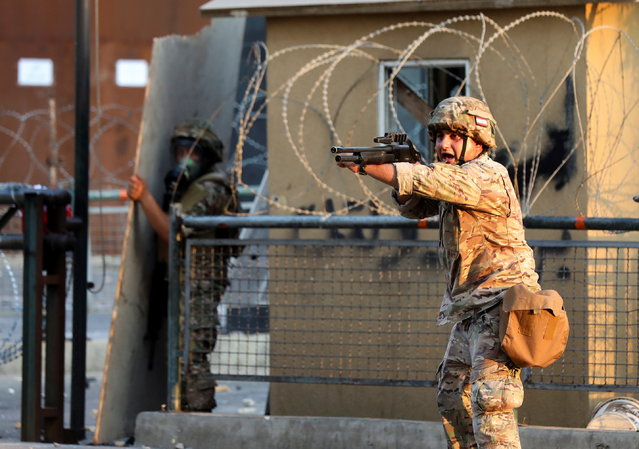 Security forces clash with demonstrators during a protest near parliament, as Lebanon marks the one-year anniversary of the explosion in Beirut, Lebanon on August 4, 2021. (Photo by Mohamed Azakir/Reuters) A protester stands with a Lebanese national flag during clashes with army and security forces near the Lebanese parliament headquarters in the centre of the capital Beirut on August 4, 2021, on the first anniversary of the blast that ravaged the port and the city. Hundreds of Lebanese marched on August 4 to mark a year since a cataclysmic explosion ravaged Beirut, protesting impunity over the country's worst peacetime disaster at a time when its economy was already in tatters. (Photo by Patrick Baz/AFP Photo) 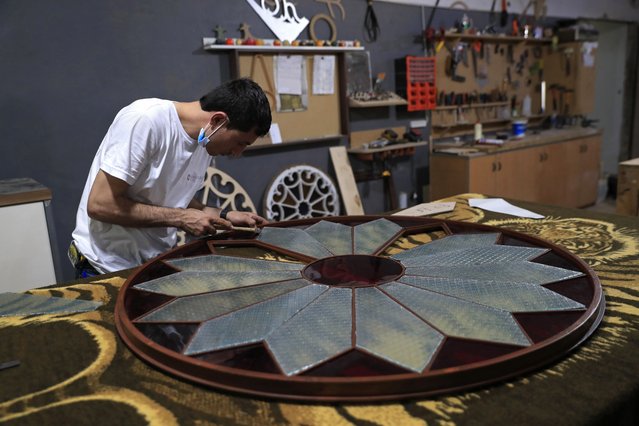 A carpenter works on restoring part of a door's windows glass that was shattered in a massive explosion last August in the Beirut port, at a workshop in Bsous village, Lebanon, Monday, June 28, 2021. The 60-year-old Sursock Museum is still rebuilding a year after the explosion. It was the beating heart of Beirut's arts community, and some hope that reopening it will be a first step in the harder task of  rebuilding the city's once thriving arts scene. (Photo by Hussein Malla/AP Photo) 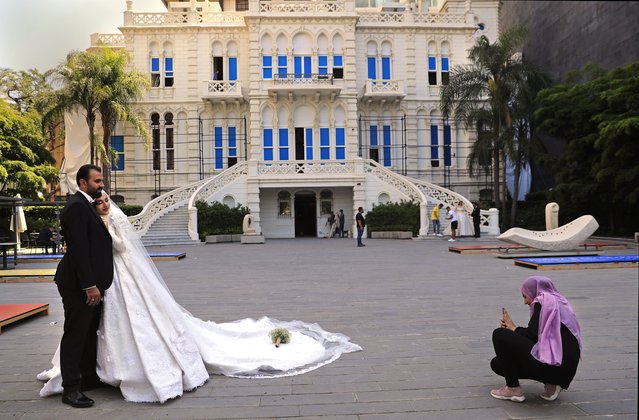 A woman takes pictures of a Lebanese bride and groom in the courtyard of the Sursock Museum, which was damaged in the explosion last August at Beirut's port, in Beirut, Lebanon on July 27, 2021. (Photo by Hussein Malla/AP Photo) 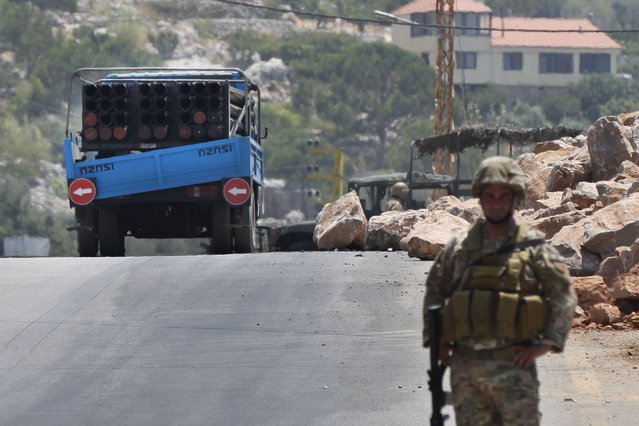 A Lebanese army soldier stands next of a rocket launcher placed on a pick up truck that was used by Hezbollah to fire rockets near Israeli positions, in the southeastern village of Shwaya, near the border with the Golan Heights, Friday, August 6, 2021. The militant Hezbollah group said it fired a barrage of rockets near Israeli positions close to the Lebanese border on Friday, calling it retaliation for Israeli airstrikes on southern Lebanon a day earlier. (Photo by Mohammed Zaatari/AP Photo) 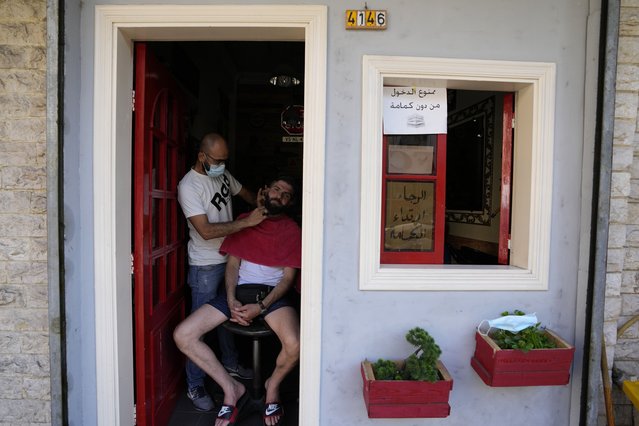 A Lebanese barber shaves the beard of a customer at the door of his shop during a power outage in a southern suburb of Beirut, Lebanon, Wednesday, August 11, 2021. Lebanon, which is mired in multiple crises including a devastating economic crisis, has faced months of severe fuel shortages that have prompted long lines at gas stations and plunged the small country, dependent on private generators for power, into long hours of darkness. Sign on door says, “Forbidden to enter without mask”. (Photo by Hassan Ammar/AP Photo) 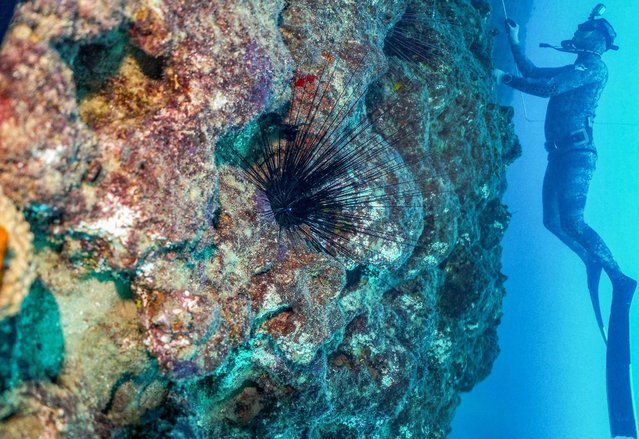 A freediver swims some 17 meters underwater past a Diadema setosum long-spined sea urchin, typically native to Indo-Pacific waters and currently invading the eastern Mediteranean sea, off the shore of Lebanon's northern coastal city of Qalamun on August 11, 2021. (Photo by Ibrahim Chalhoub/AFP Photo) 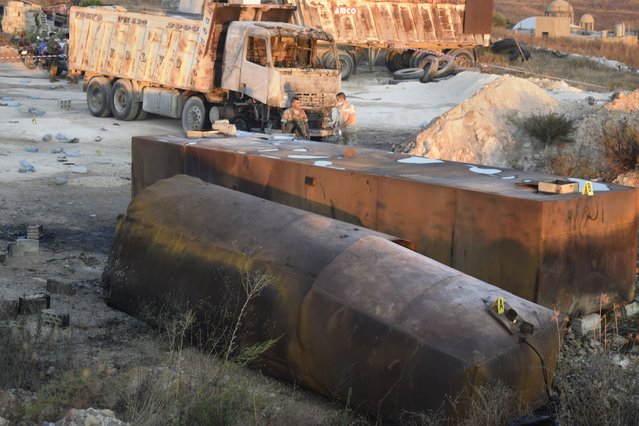 Lebanese soldiers stand guard next to fuel tankers that were exploded, in Tleil village, north Lebanon, Sunday, August 15, 2021. A warehouse where fuel was illegally stored exploded early Sunday in northern Lebanon, killing and wounded several people, the Lebanese Red Cross said. The explosion comes as Lebanon faces a severe fuel shortage that has been blamed on smuggling, hoarding and the cash-strapped government's inability to secure deliveries of imported fuel. (Photo by AP Photo/Stringer) 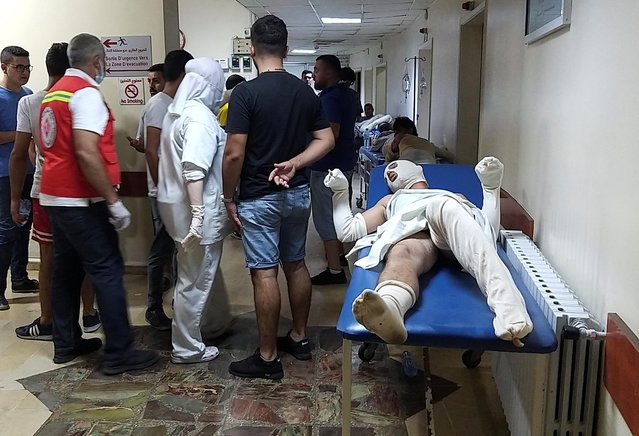 A person, who was injured during a fuel tanker explosion in Akkar, lies on a bed in a hospital in Tripoli, northern Lebanon on August 15, 2021. (Photo by Walid Saleh/Reuters) 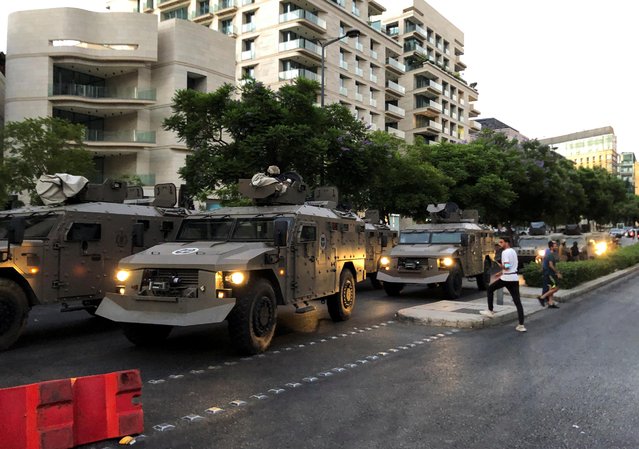 Police armored vehicles are deployed after clashes between security forces and protesters outside the home of Prime Minister-designate Najib Mikati in Beirut, following a fuel tank explosion in northern Lebanon, August 15, 2021. (Photo by Issam Abdallah/Reuters) A Shi'ite Muslim woman bleeds after she was cut on the forehead with a razor during a religious procession to mark Ashura in Nabatieh, southern Lebanon on August 19, 2021. (Photo by Aziz Taher/Reuters)
Edit Del
26 Aug 2021 08:17:00, post received 0 comments
Publication archive:
←   →
Popular tags:
All tags
Last searches: