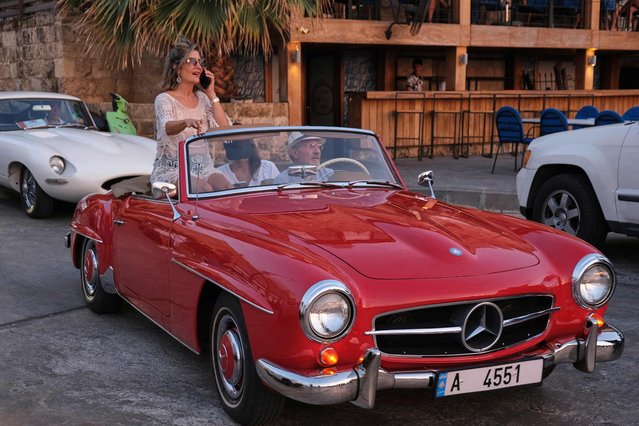 A woman talks on the phone as she sits in her 1961 Mercedes Benz during a classic and luxury car parade at the fishermen's port of the northern Lebanese city of Batroun, on August 6, 2022. (Photo by Ibrahim Chalhoub/AFP Photo) 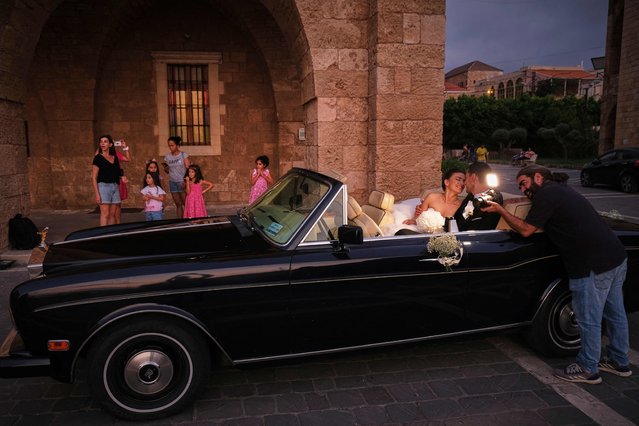 A photographer takes pictures of a newly wedded couple in a classic car, in front of the Saint Estephan Maronite church at the fishermen's port of the northern Lebanese city of Batroun, on August 6, 2022. (Photo by Ibrahim Chalhoub/AFP Photo) 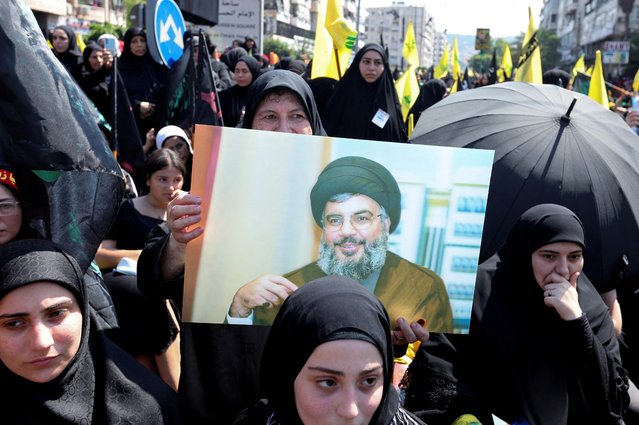 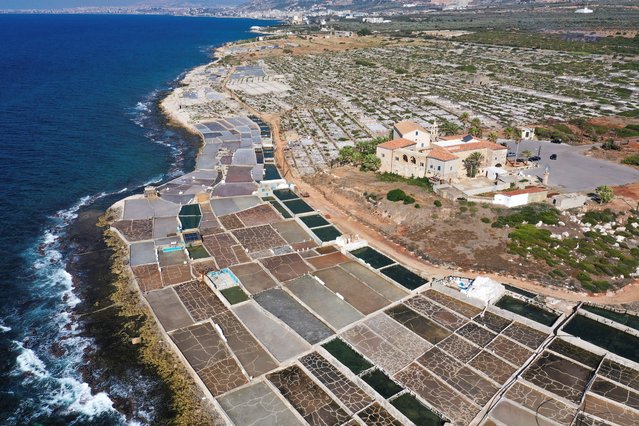 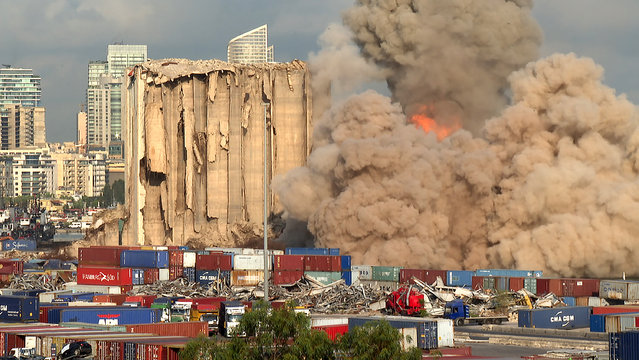 This grab from AFPTV footage shot on August 23, 2022 shows a smoke plume rising after the new collapse of the northern section of the grain silos at the port of Lebanon's capital Beirut, which were previously partly destroyed by the 2020 port explosion. Eight more grain silos at Beirut port toppled on August 23, succumbing to damage from a devastating 2020 explosion in the third such collapse in a month, AFP correspondents reported. The remaining southern block is more stable and not at imminent risk of collapse, said French civil engineer Emmanuel Durand, who has installed sensors on the silos. (Photo by Dylan Collins/AFPTV via AFP Photo) 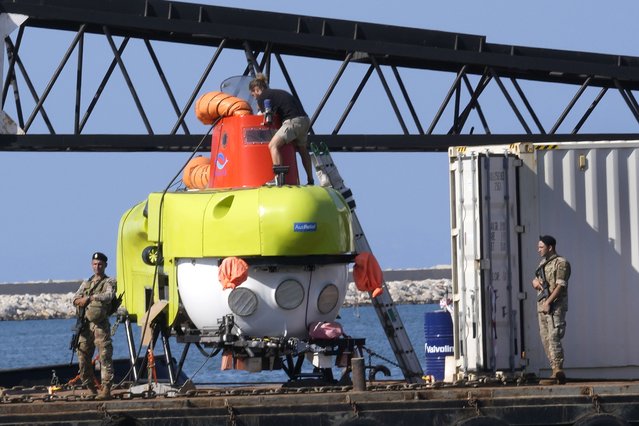 A technical member team of the small, 3-person underwater craft, a Pisces VI submarine, center top, checks the submarine at the Lebanese navy base, in Tripoli, north Lebanon, Friday, August 26, 2022. The Lebanese navy and a submarine crew announced that they found the remains of at least seven of the approximately 30 drowned migrants in a sunken ship off the coast of Tripoli. In late April, a boat carrying about 80 Lebanese, Syrians, and Palestinians trying to migrate by sea to Italy sunk following a confrontation with the Lebanese navy. (Photo by Hussein Malla/AP Photo) 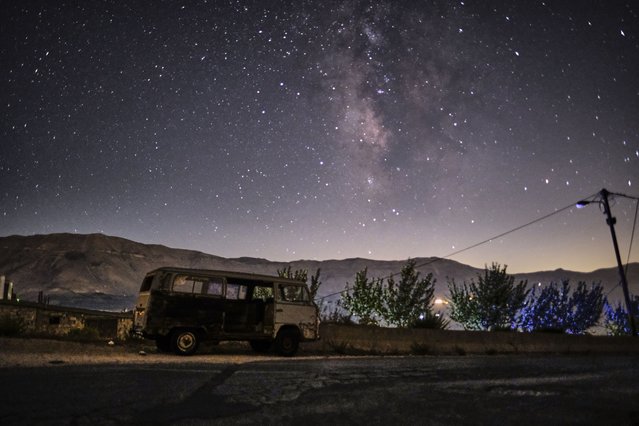 A long exposure picture taken early on August 28, 2022, shows a view of the Milky Way galaxy in the sky above a derelict van in the town of Bcahrre in the mountains of Lebanon, north of the capital Beirut. (Photo by Ibrahim Chalhoub/AFP Photo) 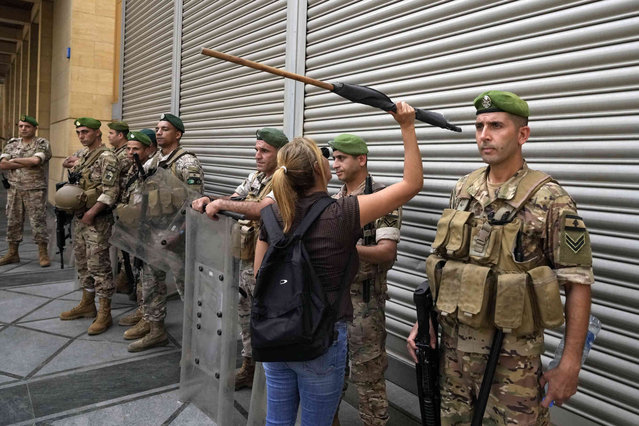 A bank customer bangs on a metal walls of a bank as army soldiers stand guard near Lebanon's parliament during a protest against a capital controls draft law protesters said would further restrict their trapped savings in the banks, in Beirut, Lebanon, Tuesday, August 30, 2022. Over the past three years, Lebanon's economy has been spiraling in what the World Bank has said is one of the world's worst financial crises in over a century. (Photo by Bilal Hussein/AP Photo) 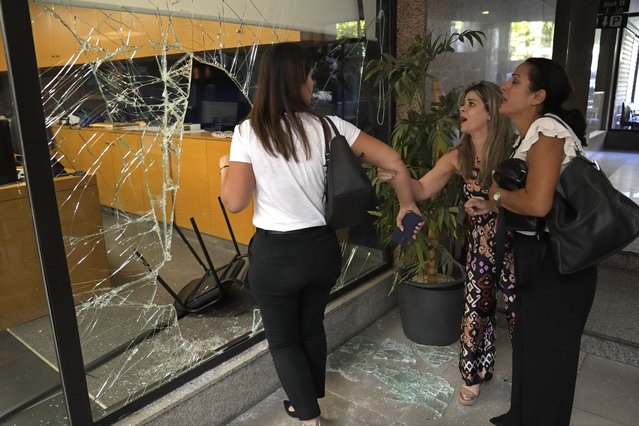 Panicked bank employees stand next to a window that was broken by attackers to exit the bank, in Beirut, Lebanon, Wednesday, September 14, 2022. An armed woman and a dozen activists broke into a Beirut bank branch on Wednesday, taking over $13,000 from what she says were from her trapped savings. Lebanon's cash-strapped banks since 2019 have imposed strict limits on withdrawals of foreign currency, tying up the savings of millions of people. (Photo by Hussein Malla/AP Photo) 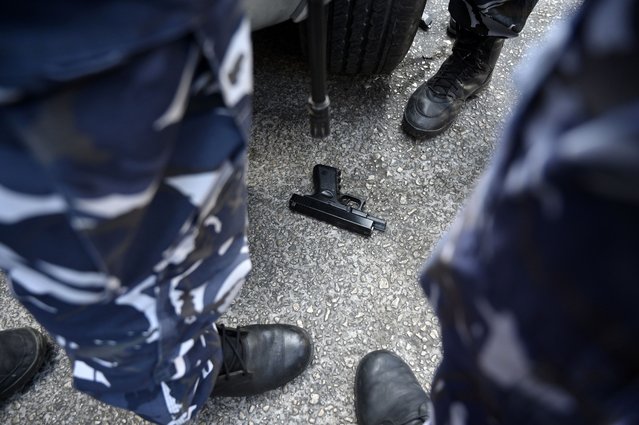 Members of the Lebanese security forces stand next to a toy gun that was used by depositors in an hostage taken situation, at a Blom Bank branch in Beirut, Lebanon, 14 September 2022. A group of depositors, at least one of whom is armed, took hostages at the Blom Bank branch in Beirut demanding access to their savings. The depositors were able to withdraw twenty thousand US Dollars from an account of one of the depositors before they left. (Photo by Wael Hamzeh/EPA/EFE) 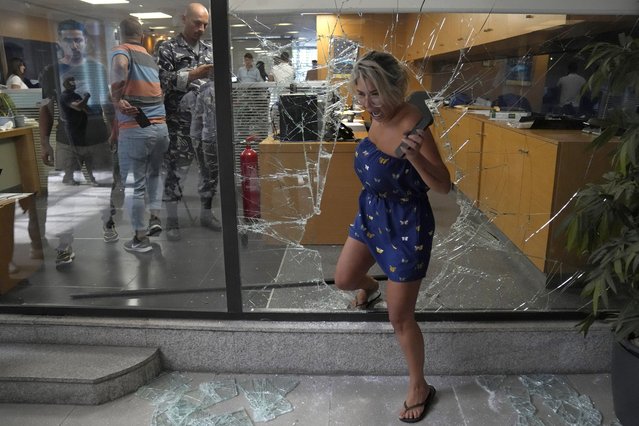 A bank employee exits the bank through a window broken by attackers, in Beirut, Lebanon, Wednesday, September 14, 2022. (Photo by Hussein Malla/AP Photo) 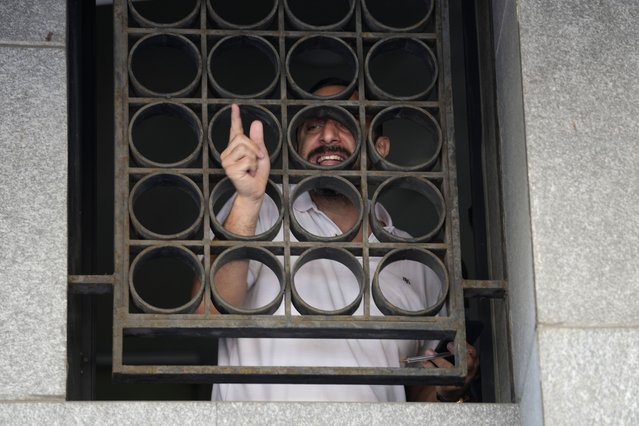 Abed Soubra, who is allegedly holding hostages in a bank in an effort to get to funds in his account, speaks with media in Beirut, Lebanon, Friday, September 16, 2022. Depositors broke into at least four banks in different parts of crisis-hit Lebanon Friday demanding that they get their trapped savings as chaos spreads in the small Mediterranean nation in the middle of a historic economic meltdown. (Photo by Bilal Hussein/AP Photo) 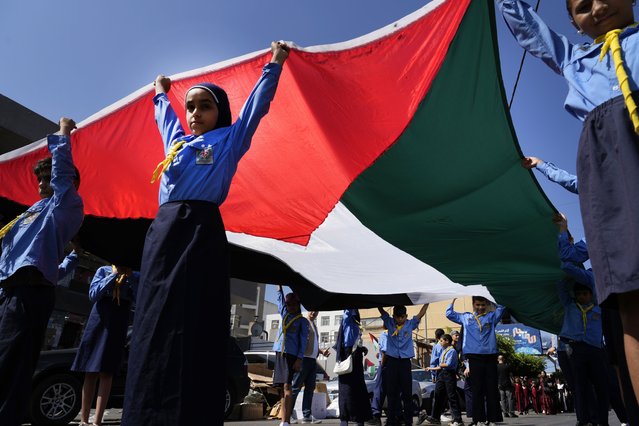 Palestinian scouts carry their national flag, as the march during the 40th anniversary commemoration of the Sabra and Shatila massacre, in Beirut, Lebanon, Friday, September 16, 2022. During the Israeli's invasion of Lebanon in 1982, Palestinian men, women and children were massacred by forces identified as Lebanese Christian militiamen in west Beirut's Sabra and Shatila refugee camps. The official toll is 328 confirmed killed, 991 missing. (Photo by Bilal Hussein/AP Photo) 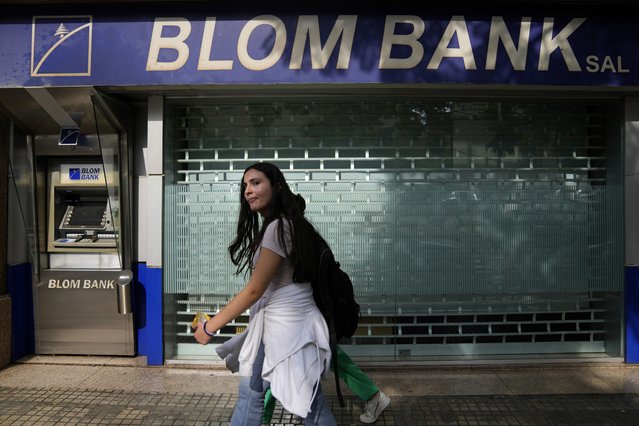 A BLOM Bank branch is shuttered and closed in Beirut, Lebanon, Tuesday, September 20, 2022. Lebanese banks closed their doors for three days on Sept. 19 to protest recent attacks and heists by depositors demanding their trapped savings. (Photo by Hassan Ammar/AP Photo) 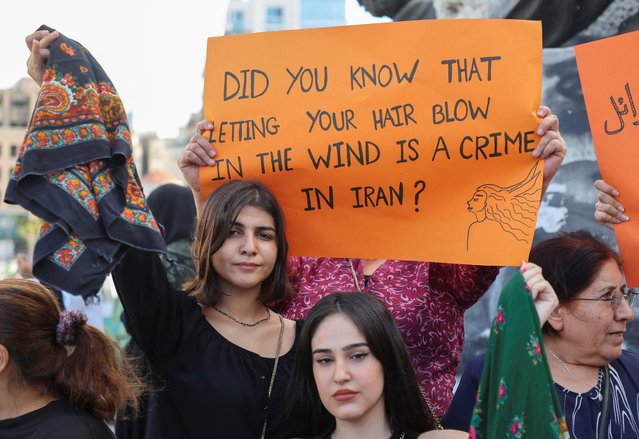 Women take part in a sit-in following the death of Mahsa Amini, at Martyrs' Square in Beirut, Lebanon on September 21, 2022. (Photo by Mohamed Azakir/Reuters) 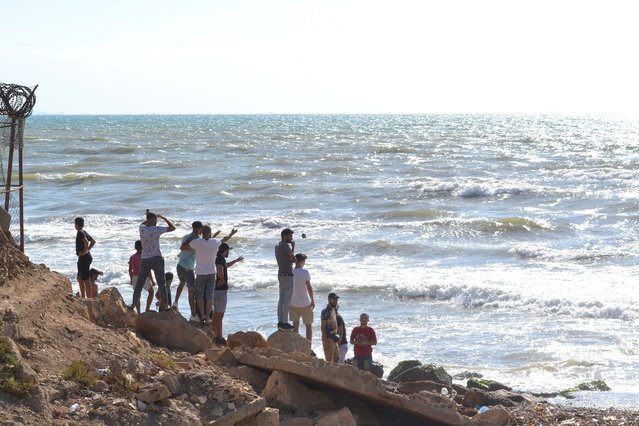 Lebanese men look towards the sea near the Arida Border Crossing with Syria, on September 23, 2022, as relatives wait for the arrival of the bodies of those drowned when a boat they boarded sank off Syria's coast. At least 77 migrants drowned when a boat they boarded in Lebanon sank off Syria's coast, Syria's health minister said Friday, in one of the deadliest such shipwrecks in the eastern Mediterranean. Lebanon, which since 2019 has been mired in a financial crisis branded by the World Bank as one of the worst in modern times, has become a launchpad for illegal migration, with its own citizens joining Syrian and Palestinian refugees clamouring to leave their homeland. Around 150 people, mostly Lebanese and Syrians, were on board the small boat that went down Thursday off the Syrian city of Tartus. (Photo by Fathi Al-Masri/AFP Photo) 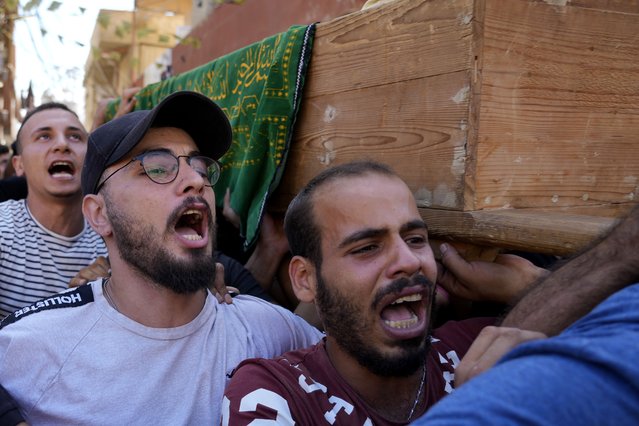 Mourners chant slogans as they carry the coffin of Palestinian Abdul-Al Omar Abdul-Al, 24, who was on a boat carrying migrants from Lebanon that sank in Syrian waters, during his funeral processions, in the Palestinian refugee camp of Nahr el-Bared near the northern city of Tripoli, Lebanon, Saturday, September 24, 2022. Thousands of Palestinians held prayers in northern Lebanon Saturday for one of the scores of migrants who lost their lives this week when their boat sank off Syria's coast. (Photo by Bilal Hussein/AP Photo) 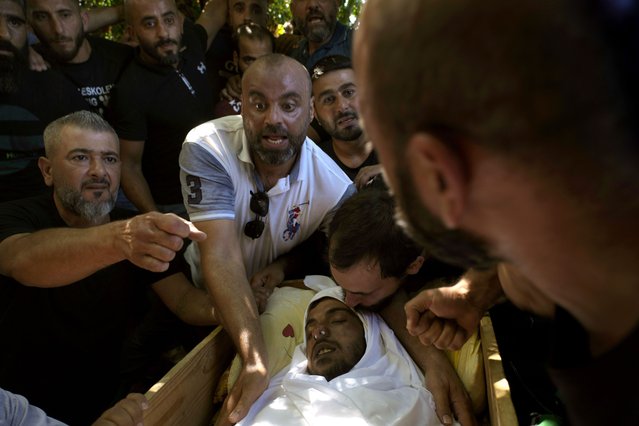 A mourner kisses the head of Palestinian Abdul-Al Omar Abdul-Al, 24, who was on a boat carrying migrants from Lebanon that sank in Syrian waters, during his funeral in the Palestinian refugee camp of Nahr el-Bared near the northern city of Tripoli, Lebanon, Saturday, September 24, 2022. (Photo by Bilal Hussein/AP Photo) 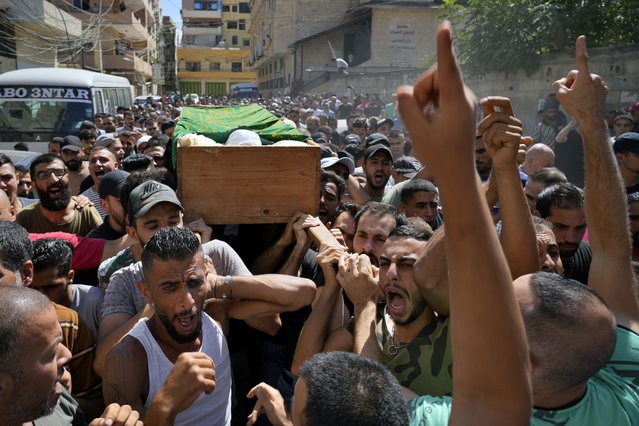 Mourners chant slogans as they carry the coffin of Palestinian Abdul-Al Omar Abdul-Al, 24, who was on a boat carrying migrants from Lebanon that sank in Syrian waters, during his funeral processions, in the Palestinian refugee camp of Nahr el-Bared near the northern city of Tripoli, Lebanon, Saturday, September 24, 2022. (Photo by Bilal Hussein/AP Photo)
Edit Del
27 Sep 2022 04:44:00, post received 0 comments
Publication archive:
←   →
Popular tags:
All tags
Last searches: