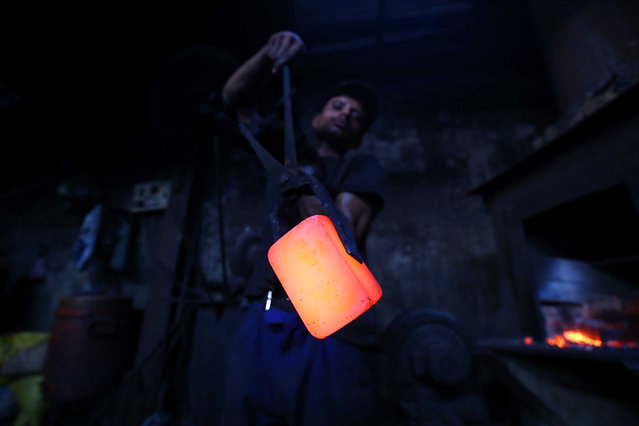 An Iron smith works at a factory in Karachi, Pakistan, 09 June 2021. Pakistan's labour market shows signs of improvement as overall employment growth turned positive and stood at 0.9 percent in July-November FY2021, compared with a contraction of 0.3 percent in the same period last year, according to the central bank's 2nd quarterly report released on 04 June 2021. (Photo by Shahzaib Akber/EPA/EFE) 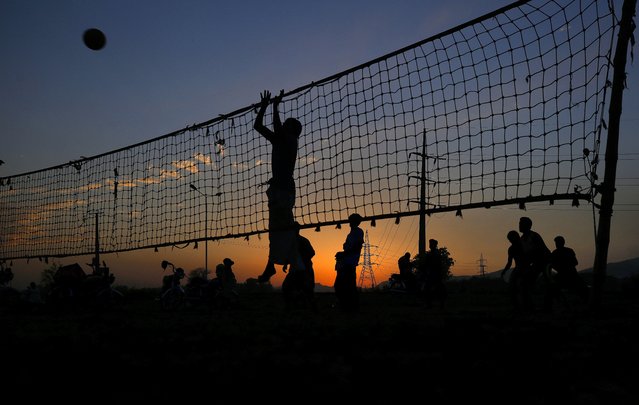 Laborers play volleyball as the sun sets in a slum area on the outskirts of Islamabad, Pakistan, Monday, July 5, 2021. (Photo by Anjum Naveed/AP Photo) 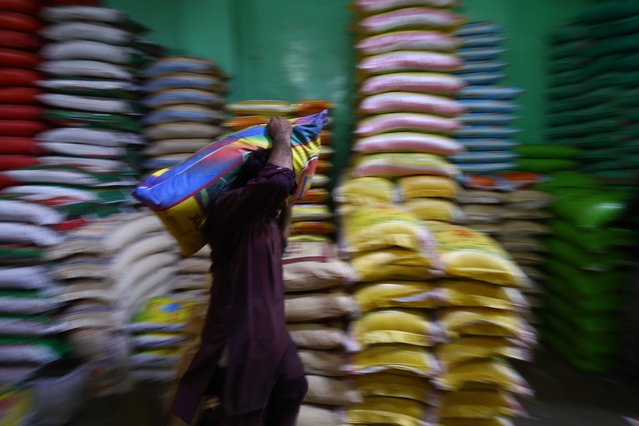 A laborer works at a market in Karachi, Pakistan, 10 June 2021. The prices of basic commodities and services have increased while the next federal budget for fiscal year 2021-22 is all set to be presented on 11 June in the National Assembly, lower house of the Parliament. (Photo by Shahzaib Akber/EPA/EFE) 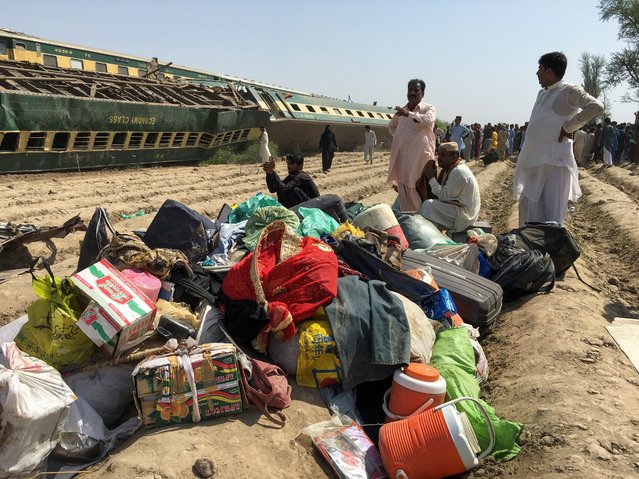 Passengers' belongings lie on the ground near the site of a collision between two trains in Ghotki, Pakistan on June 7, 2021. (Photo by Reuters/Stringer) 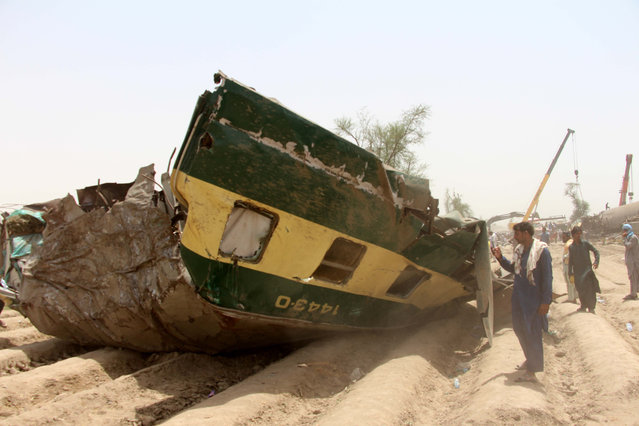 Rescue workers carry on operations at the scene following a train accident in Dharki, Sindh province, Pakistan, 07 June 2021. At least 40 people were killed and dozens others injured when the Millat Express derailed and collided with Sir Syed Express on the adjoining track. Train accidents are not uncommon in Pakistan, whose rail network dates back to the time when it was a colony of the British Empire, and from which it gained independence in 1947. (Photo by Waqar Hussein/EPA/EFE) 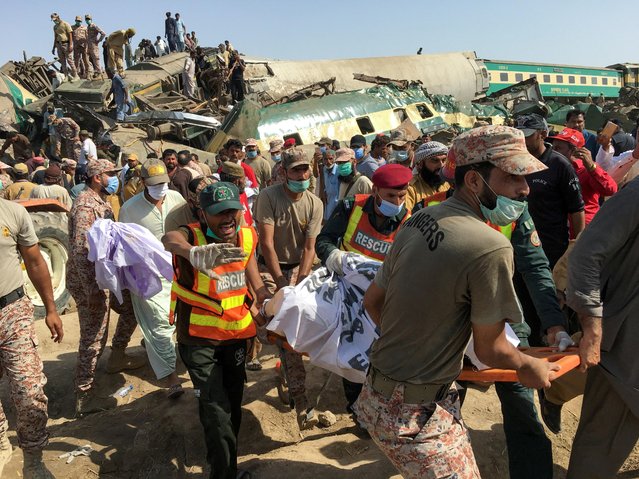 Paramilitary soldiers and rescue workers move a body of a man from the site following a collision between two trains in Ghotki, Pakistan on June 7, 2021. (Photo by Reuters/Stringer) Passengers (R) look out from a window of a train as they travel next to the wreckage of a train after a restoration of the rail track in Daharki on June 8, 2021, a day after a packed inter-city train ploughed into another express that had derailed, killing at least 63 people. (Photo by Shahid Saeed Mirza/AFP Photo) 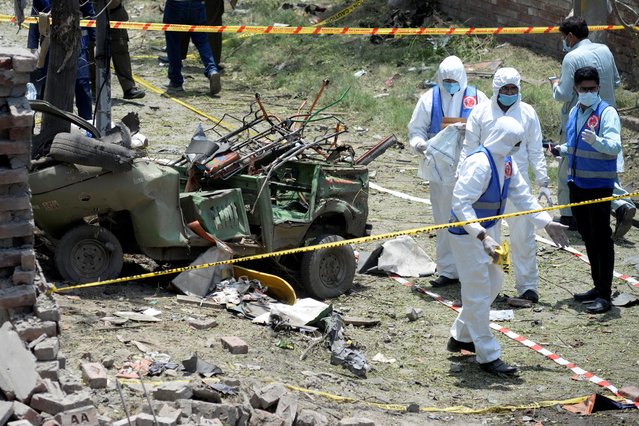 Members of the Counter Terrorism Department (CTD) survey the site after a deadly blast in residential area in Lahore, Pakistan on June 23, 2021. (Photo by Mohsin Raza/Reuters) 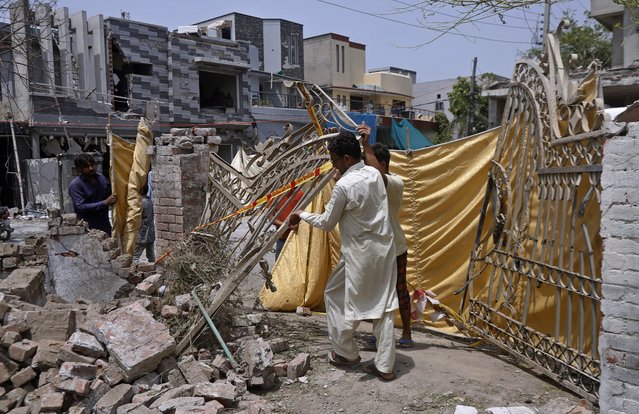 Residents remove a gate from their damaged house at the site of a car bombing Wednesday, in Lahore, Pakistan, Thursday, June 24, 2021. Pakistani security forces on Thursday arrested one of the alleged perpetrators of the car bombing that killed at least three people and wounded some 25 others near the residence of a jailed anti-India militant leader Hafiz Saeed, in the eastern city of Lahore, officials said. (Photo by K.M. Chaudary/AP Photo) 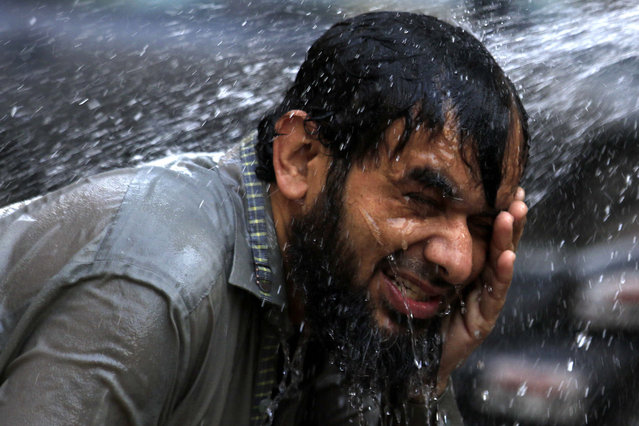 A Pakistani man cools off by pouring water on his heads at a roadside as heat wave continues in Peshawar, Pakistan, 09 June 2021. Pakistan's Meteorological Department (PMD) said the weather in the city will remain hot and humid for the next three days. (Photo by Arshad Arbab/EPA/EFE) 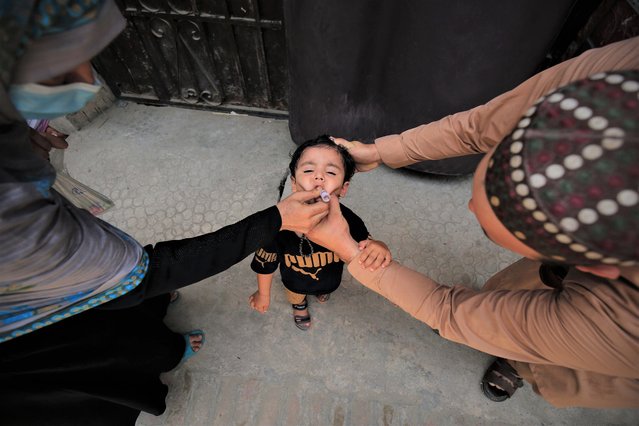 A health worker administers polio vaccine to children during a polio vaccination door-to-door campaign, as the spread of the coronavirus disease (COVID-19) continues, in Peshawar, Pakistan, 07 June 2021. A seven-day national polio immunisation drive will start 07 June to vaccinate over 40 million children under the age of five across Pakistan. Around 285,000 polio frontline workers will visit parents and caregivers at their doorstep, adhering to strict COVID-19 precautionary measures and protocols while vaccinating children. These measures will include wearing a mask, using hand sanitizer, and maintaining a safe distance during the vaccination. (Photo by Bilawal Arbab/EPA/EFE) 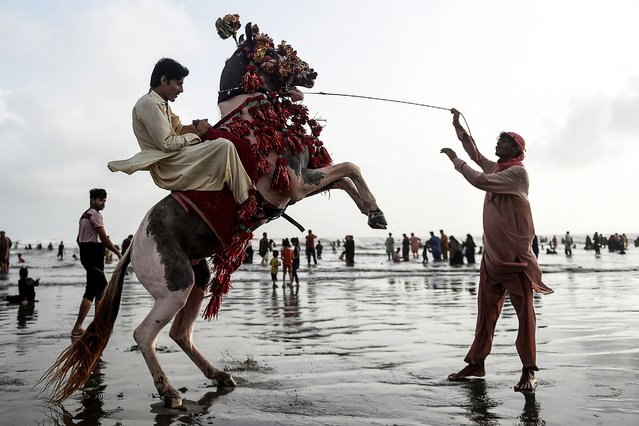 A youth enjoys a horse ride along a beach during a hot summer day in Karachi on June 13, 2021. (Photo by Rizwan Tabassum/AFP Photo) 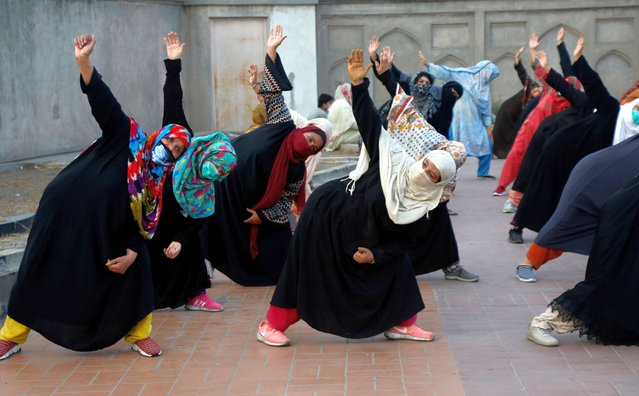 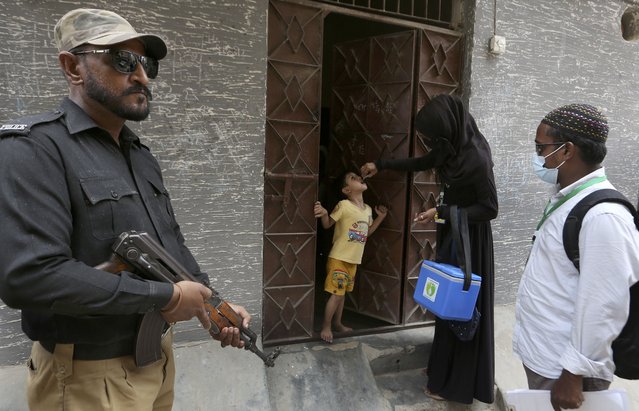 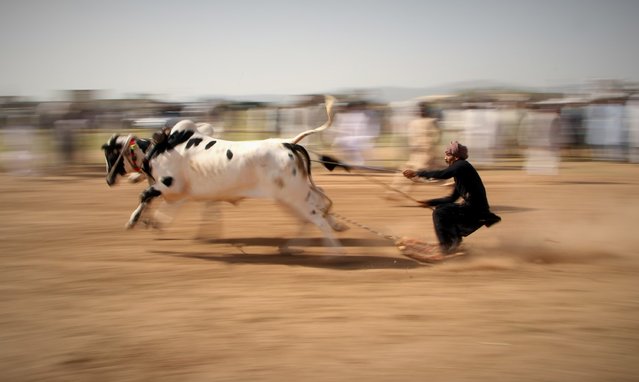 A participant competes in a bull race on the outskirts of Rawalpindi, Pakistan, 27 June 2021. The race was organized as part of cultural activity. (Photo by Sohail Shahzad/EPA/EFE) 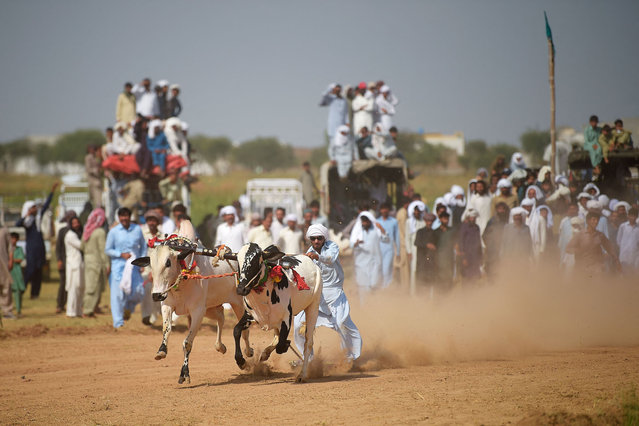 Onlookers watch and cheer as farmers race their bulls in a traditional bull racing competition held on the outskirts of Islamabad on June 27, 2021. (Photo by Farooq Naeem/AFP Photo) 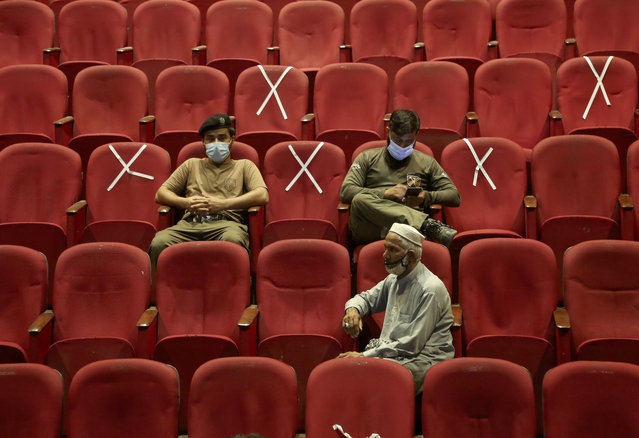 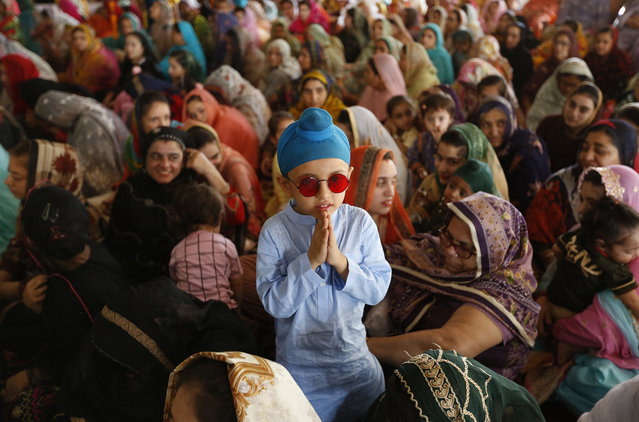 A Sikh child stands beside his mother attending a ceremony to observe the Martyrdom Day of Guru Arjan Dev Ji, at Gurudwara Dera Sahib, in Lahore, Pakistan, Wednesday, June 16, 2021. Hundreds of Sikh pilgrims are attending the 415th anniversary of the death of the fifth Sikh Guru, Arjan Dev Ji, that is celebrated in Derah Sahib. (Photo by K.M. Chaudary/AP Photo) 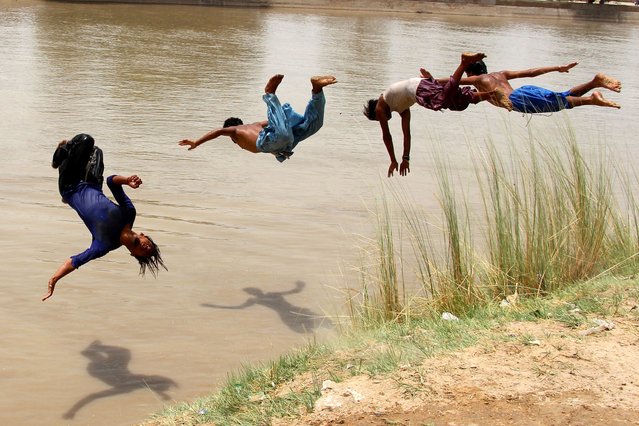 Pakistani boys jump in the water to cool off in a pond to beat the heat wave continues in Larkana, Pakistan, 26 June 2021. Pakistan's Meteorological Department (PMD) said the weather in the city will remain hot and humid for the next three days. (Photo by Waqar Hussain/EPA/EFE)
Edit Del
10 Jul 2021 09:02:00, post received 0 comments
Publication archive:
←   →
Popular tags:
All tags
Last searches: