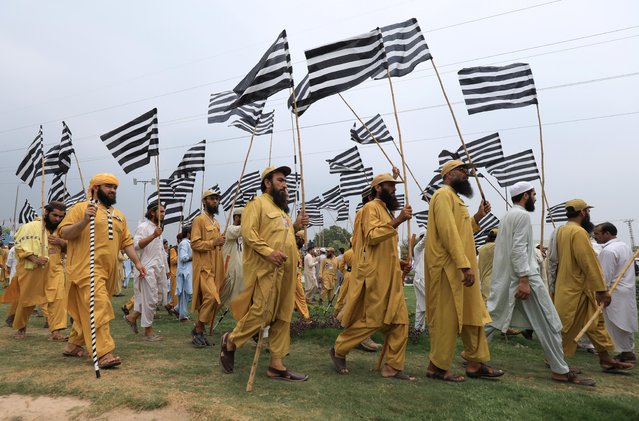 Supporters of opposition political parties walk with flags during a countrywide protest called “Black Day” against the government of prime minister Imran Khan, in Peshawar, Pakistan on July 25, 2019. (Photo by Fayaz Aziz/Reuters) 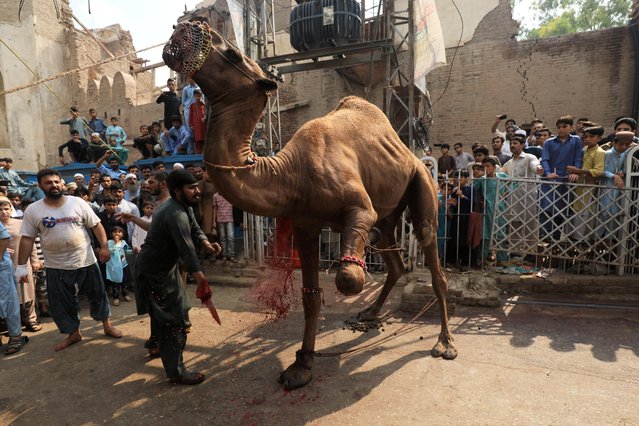 Men and children gather as a camel is being slaughtered in celebration of Eid al-Adha, in Peshawar, Pakistan on August 12, 2019. (Photo by Fayaz Aziz/Reuters) 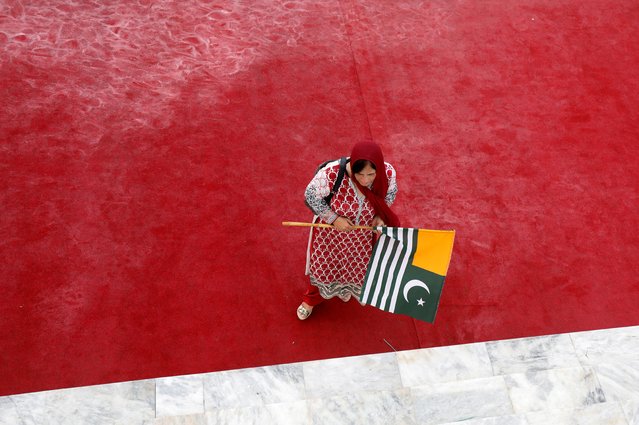 A woman walks with a Kashmir's flag to express solidarity with the people of Kashmir, during a ceremony to celebrate Pakistan's 72nd Independence Day at the Mausoleum of Muhammad Ali Jinnah in Karachi, Pakistan on August 14, 2019. (Photo by Akhtar Soomro/Reuters) 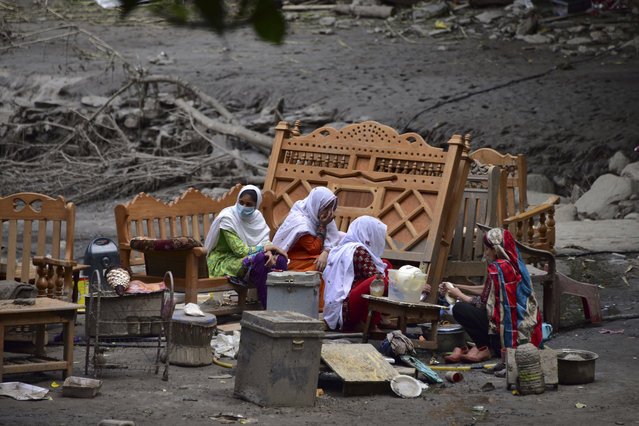 A Pakistani Kashmiri family gather around their belongings outside their damaged house following heavy monsoon rains in Neelum valley, near the Line of Control in Pakistan-controlled Kashmir on July 16, 2019. In Pakistan-administered Kashmir, officials said at least 23 people were killed after heavy rain triggered flash floods and damaged more than 120 houses and 30 shops, while crippling the water and electricity supplies. (Photo by Sajjad Qayyum/AFP Photo)

A vendor prepares food as the street is flooded after a heavy rainfall in Lahore, Pakistan, Thursday, July 25, 2019. Pakistani authorities issued a warning of heavy rains and flooding during a monsoon. (Photo by K.M. Chaudary/AP Photo) 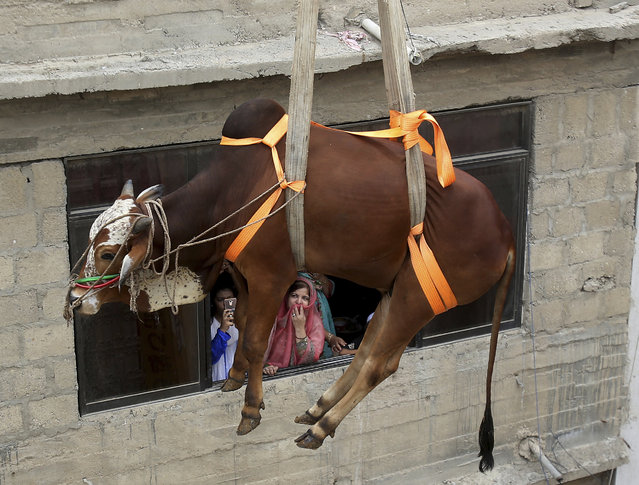 People look as a bull is brought down from the rooftop of a three-story house with a crane, to be sold for the upcoming Muslim Eid al-Adha holiday, in Karachi, Pakistan, Sunday, August 4, 2019. Eid al-Adha, or Feast of Sacrifice, this most important Islamic holiday marks the willingness of the Prophet Ibrahim (Abraham to Christians and Jews) to sacrifice his son. During the holiday, which in most places lasts four days, Muslims slaughter sheep or cattle, distribute part of the meat to the poor and eat the rest. (Photo by Fareed Khan/AP Photo) 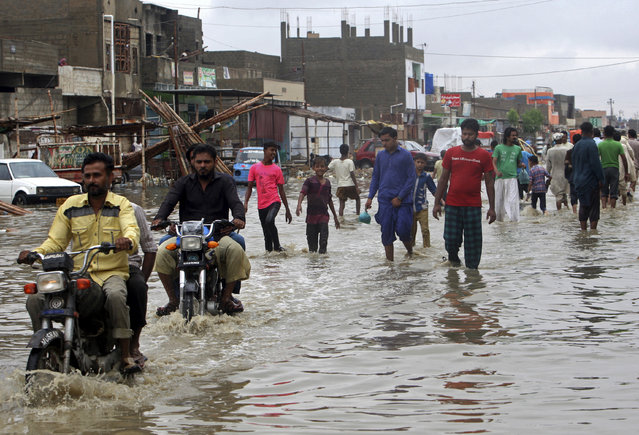 People wade through a flooded street after a heavy rainfall in Karachi, Pakistan, Tuesday, July 30, 2019. The Pakistan Meteorological Department said that a rain system entered Sindh province from India's Rajasthan and forecasts another three days of rain. (Photo by Fareed Khan/AP Photo) 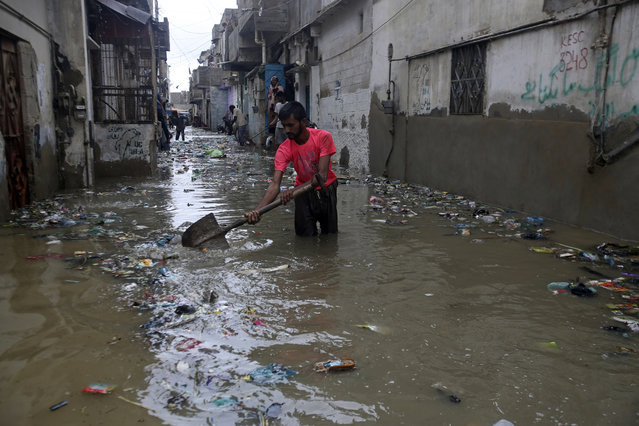 A man cleans a flooded street after a heavy rainfall, in Karachi, Pakistan, Tuesday, July 30, 2019. The Pakistan Meteorological Department said that a rain system entered Sindh province from India's Rajasthan and forecasts another three days of rain. (Photo by Fareed Khan/AP Photo) 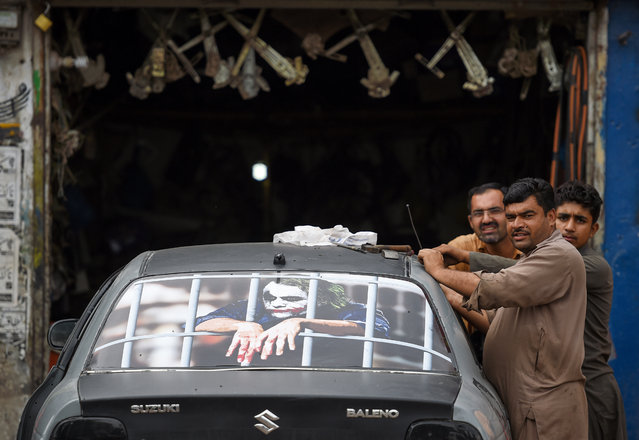 Motor mechanics look on as they decorate a car at their workshop on the outskirts of Islamabad on August 26, 2019. Analysts warn that with Pakistan's galloping population increase far outstripping growth – set to slow to 2.4 percent this year – the country will find no short-term relief, even after the International Monetary Fund approved its latest $6 billion loan. (Photo by Farooq Naeem/AFP Photo) 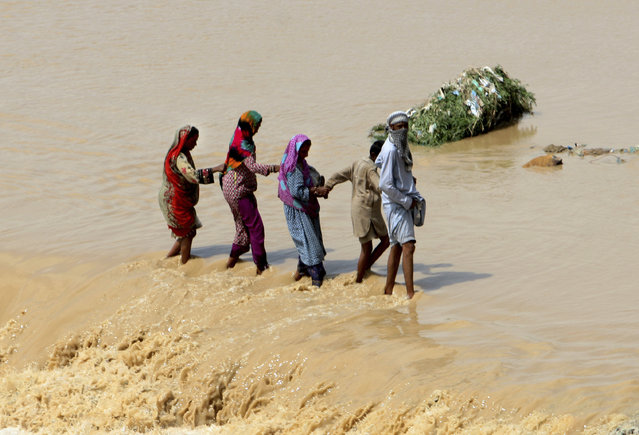 Pakistani family members help each others to cross stream caused by heavy rainfall in Karachi, Pakistan, Wednesday, July 31, 2019. Every year, many cities in Pakistan struggle to cope with the annual monsoon deluge, drawing criticism about poor planning. The monsoon season runs from July through September. (Photo by Fareed Khan/AP Photo) 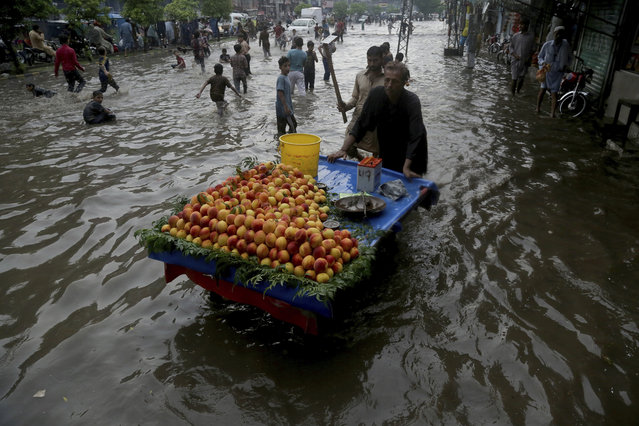 A Pakistani vendor pushes his cart, while youngster play in a flooded street after a heavy rainfall in Lahore, Pakistan, Saturday, July 20, 2019. (Photo by K.M. Chaudary/AP Photo) 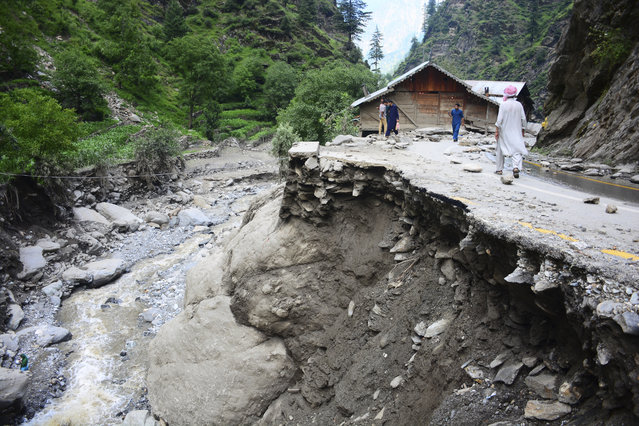 Villagers walk along a road washed away by heavy flooding in Neelum Valley of Pakistani controlled Kashmir, Monday, July 15, 2019. Pakistan says many people are missing and feared dead after heavy rains triggered flash floods in Pakistani-controlled Kashmir. Ahmed Raza Qadri, the Pakistani minister for disaster management in the disputed territory, says the flooding late on Sunday also caused much destruction and damage in the village of Lesswa in Neelum Valley. (Photo by M.D. Mughal/AP Photo) 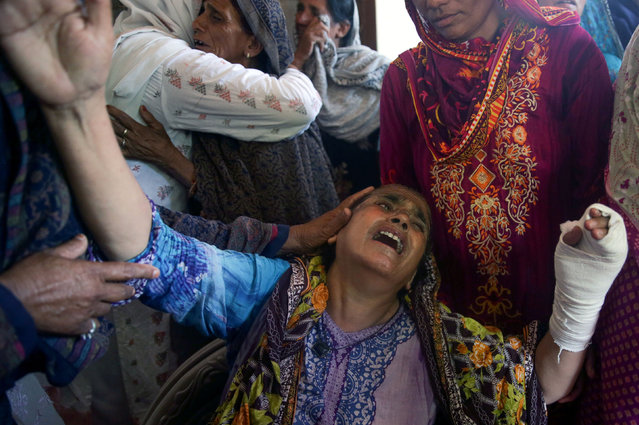 Family members comfort Sabar Jaan, as she mourns for her son, daughter-in-law and their children who were killed after a military aircraft on a training flight crashed in a built-up area in the garrison city of Rawalpindi, Pakistan, July 30, 2019. (Photo by Saiyna Bashir/Reuters) 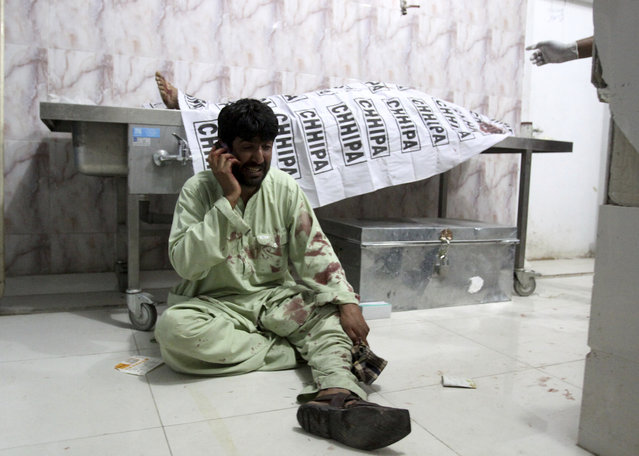 A man uses his phone to inform a family member about a death from a bombing, at a hospital in Quetta, Pakistan, Tuesday, July 30, 2019. Police in Pakistan say a roadside bomb struck a security vehicle in the southwestern city of Quetta, killing at least four people. (Photo by Arshad Butt/AP Photo) 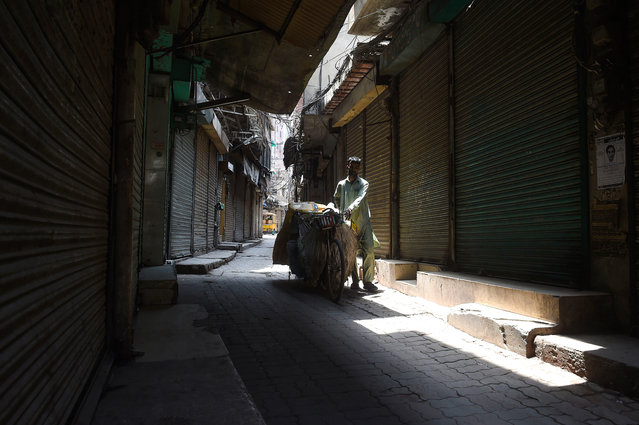 A Pakistani street vendor walks past a shuttered market during a traders countrywide strike against the prices hike, in Lahore on July 13, 2019. (Photo by Arif Ali/AFP Photo) 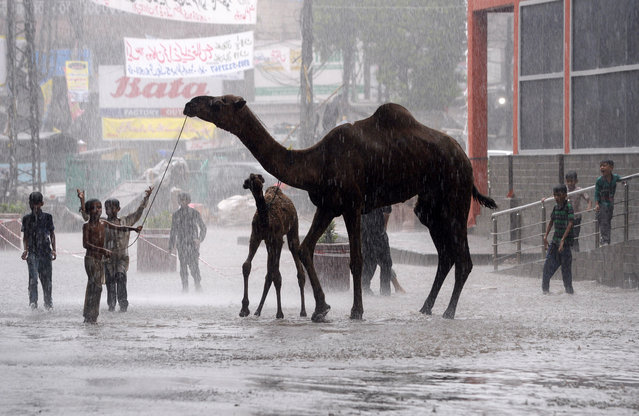