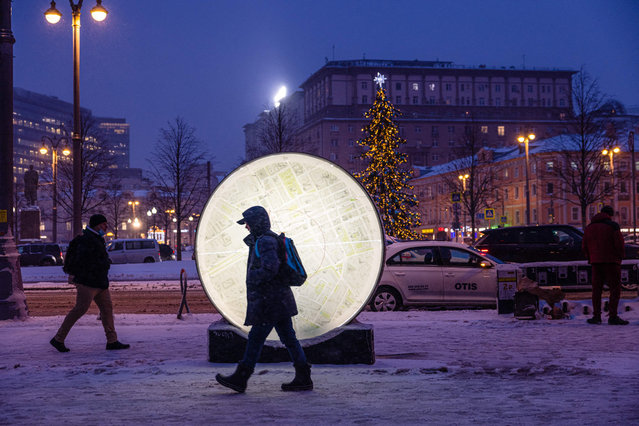 Pedestrians walk through the falling snow in Moscow on December 20, 2021. (Photo by Dimitar Dilkoff/AFP Photo) 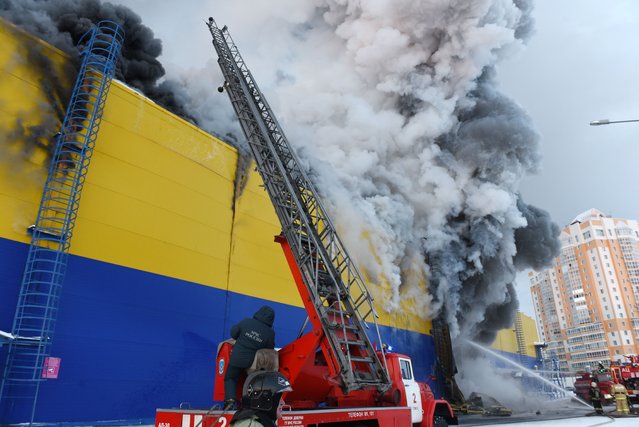 Firefighters battle a fire at a Lenta hypermarket in the city of Tomsk, Russia on December 21, 2021. (Photo by Taisiya Vorontsova/TASS) 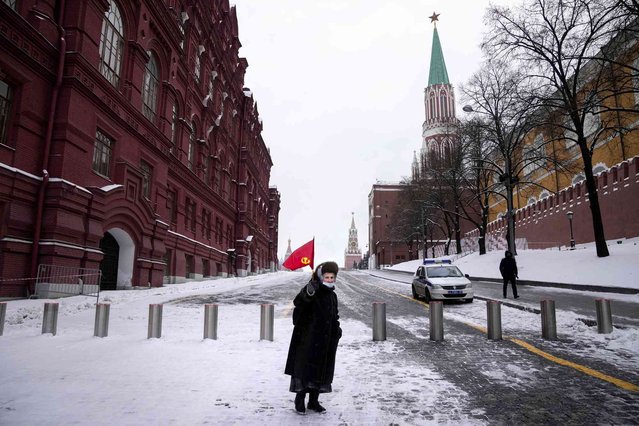 An elderly communist supporter with a former Soviet Union red flag waits to lay flowers at the grave Soviet leader Josef Stalin on the occasion of the 142nd anniversary of his birth near the Kremlin Wall in Red Square with Lenin's mausoleum on the right in Moscow, Russia, Tuesday, December 21, 2021. (Photo by Alexander Zemlianichenko/AP Photo) 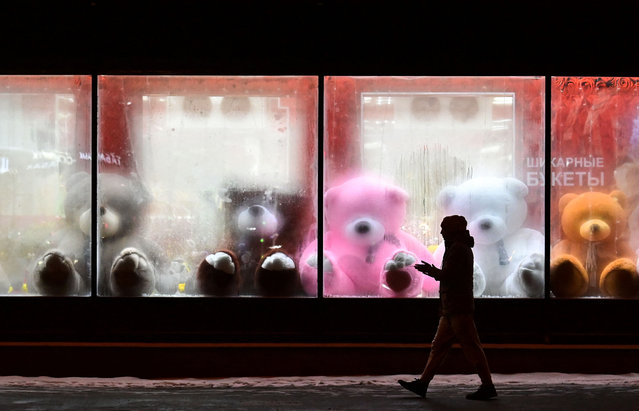 A pedestrian walks past a shop window with teddy bears as decoration ahead of the Christmas festivities in Moscow on December 20, 2021. (Photo by Yuri Kadobnov/AFP Photo) A Russian soldier takes part in drills at the Kadamovskiy firing range in the Rostov region in southern Russia, Wednesday, December 22, 2021. Russian Foreign Minister Sergey Lavrov says that Russian and U.S. negotiators will sit down for talks early next year to discuss Moscow's demand for Western guarantees precluding NATO's expansion to Ukraine. (Photo by AP Photo/Stringer) 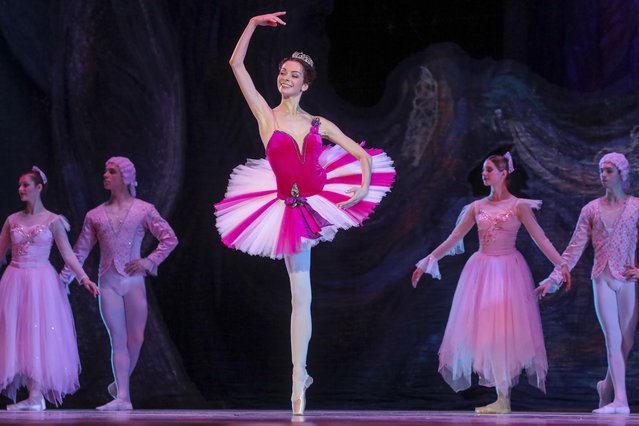 Kremlin Ballet ballerina Olesya Roslanova as Marie performs in a scene from the Kremlin Ballet's production of Russian composer Pyotr Tchaikovsky's The Nutcracker ballet choreographed by Andrei Petrov at the State Kremlin Palace in Moscow, Russia on December 21, 2021. (Photo by Sergei Karpukhin/TASS) 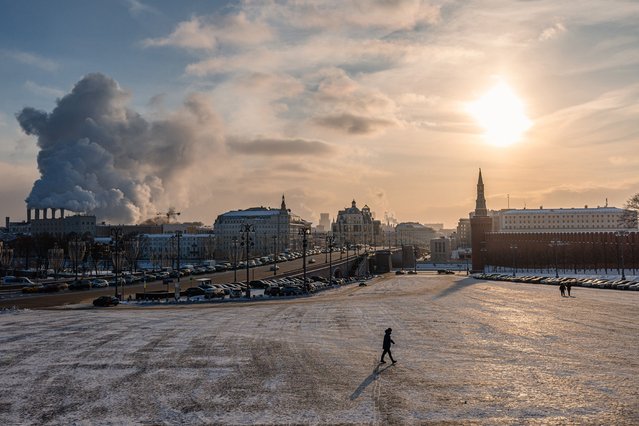 A man walks on Vasilyevsky Spusk (The Basil's Downhill) at the Kremlin during a frosty day, with the air temperature at around minus 21 degrees Celsius, in downtown Moscow on December 22, 2021. (Photo by Dimitar Dilkoff/AFP Photo) 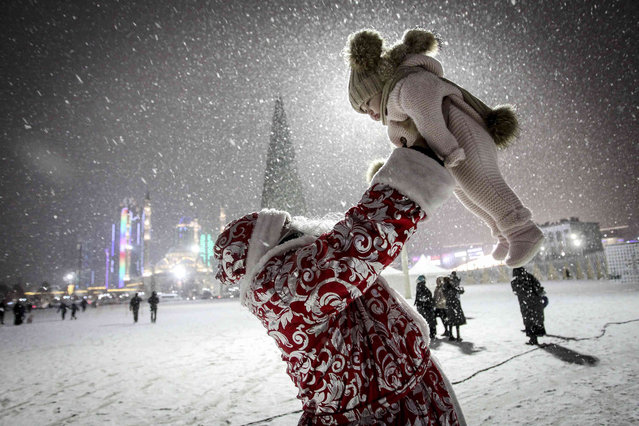 An actor dressed as Ded Moroz (Santa Claus) or Father Frost, plays with a child during snowfall at a square with a Christmas tree and and the main mosque during New Year's celebrations in Grozny, Russia, Wednesday, December 22, 2021. (Photo by Musa Sadulayev/AP Photo) 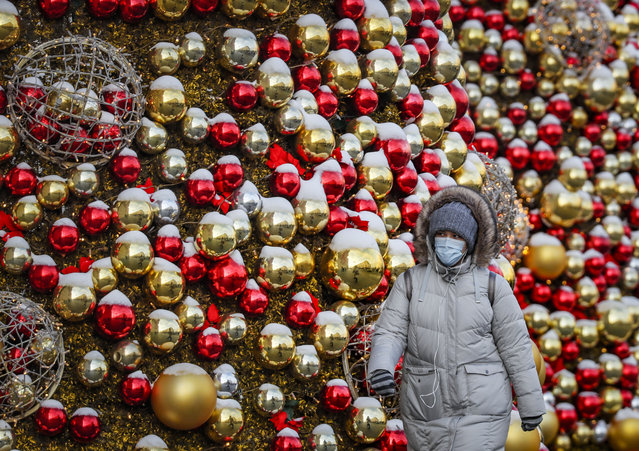 Workers decorate the main Russian 28-metre-high New Year tree at the Kremlin's Sobornaya Square in downtown Moscow on December 22, 2021, with the air temperature at around minus 21 degrees Celsius. (Photo by Dimitar Dilkoff/AFP Photo) 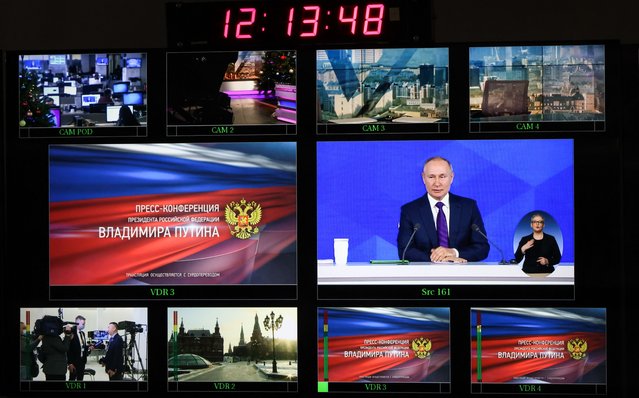 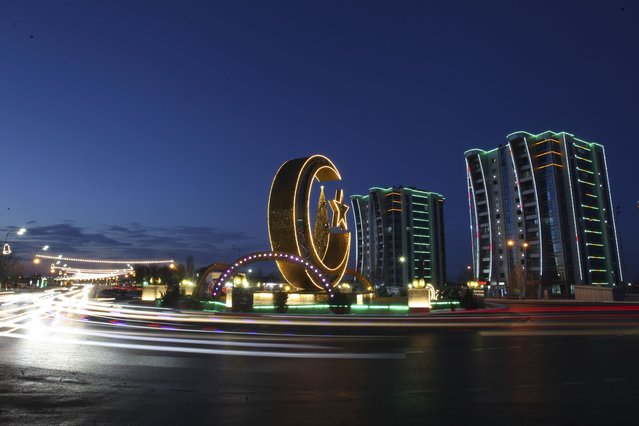 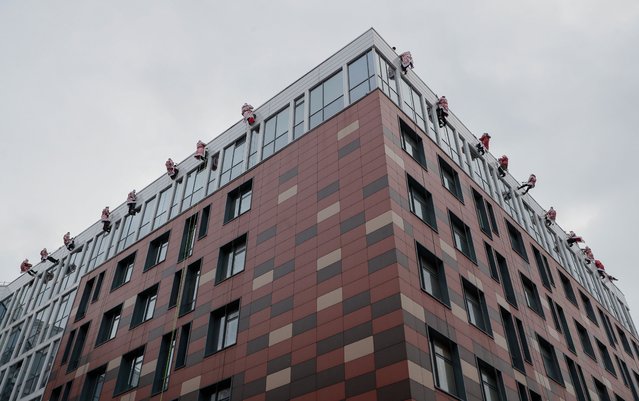 Russian firemen and rescuers dressed as Father Frost (or Ded Moroz, or Santa Claus) descend along a wall from the roof of Morozovskaya Children's hospital during a charity landing party of Fathers Frost organized for seriously-ill children ahead of the upcoming New Year and Orthodox Christmas celebrations in Moscow, Russia, 24 December 2021. Most of the children who receive medical care in the hospital, are not recommended to attend public crowded places and events. A team of 50 Fathers Frost accompanied by Snow Maidens visited the young patients as part of the fifth anniversary festival of good deeds “Winter in Morozovka”. (Photo by Sergei Ilnitsky/EPA/EFE) 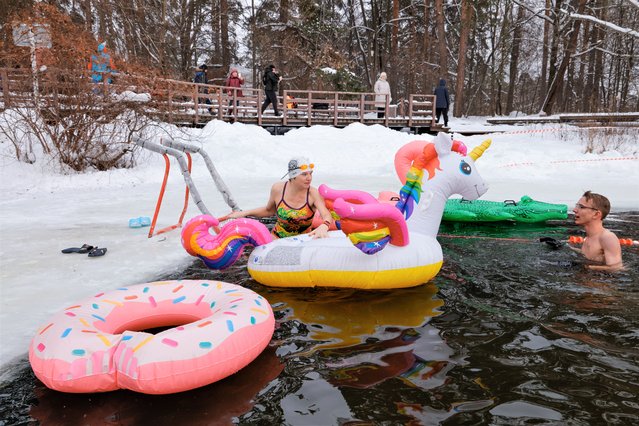 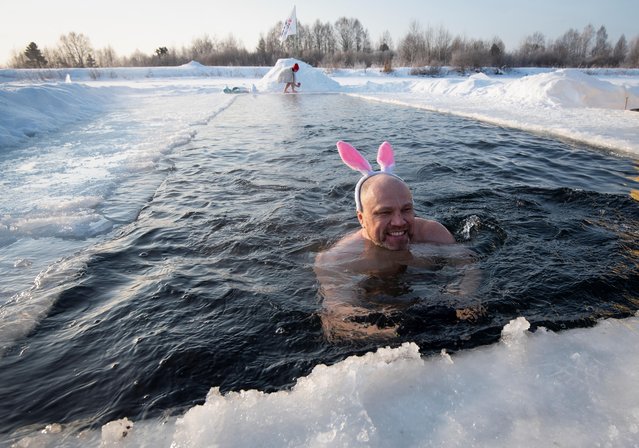 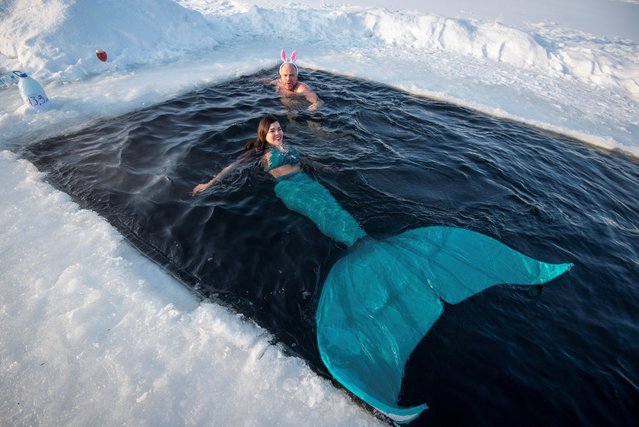 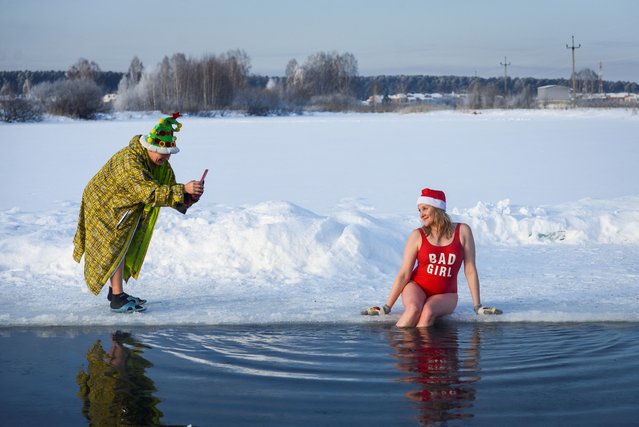 Members of a local winter swimming club photograph as they take part in festive bathing in the icy waters of Boyarskoye lake outside Tomsk, Russia, December 26, 2021. (Photo by Taisiya Vorontsova/Reuters) 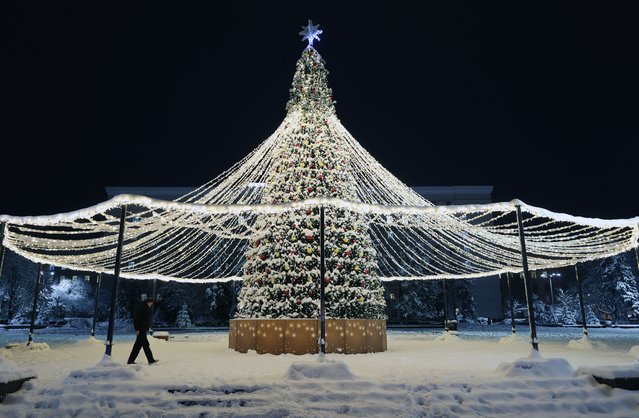 A Christmas tree stands in Soviets Square in Rostov-on-Don, Russia on December 27, 2021. (Photo by Erik Romanenko/TASS) 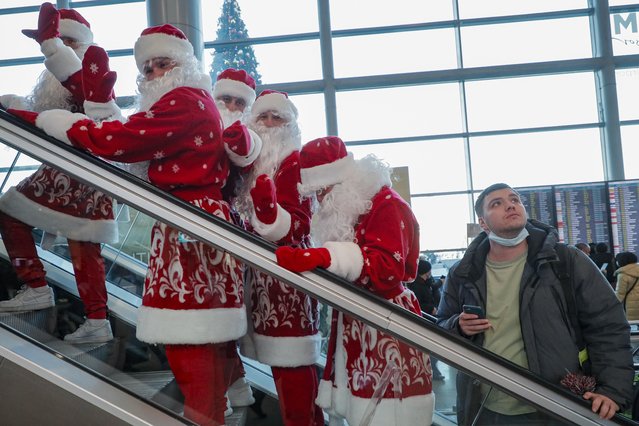 Actors dressed as Father Frost use an escalator after performing in the building of the Domodedovo airport named after Mikhail Lomonosov in Moscow, Russia, 27 December 2021. Russians are preparing to celebrate New Year's Eve on 31 December and Christmas which is observed on 07 January, according to the Russian Orthodox Julian calendar, 13 days after Christmas on 25 December on the Gregorian calendar. (Photo by Sergei Ilnitsky/EPA/EFE) 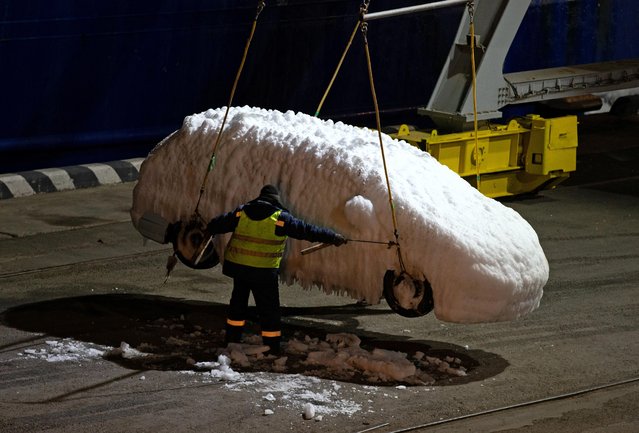 A worker unloads an ice-covered vehicle from the cargo ship Sun Rio, which was caught in severe weather conditions in the Sea of Japan, in the port of Vladivostok, Russia on December 28, 2021. (Photo by Tatiana Meel/Reuters)
Edit Del
01 Jan 2022 08:48:00, post received 0 comments
Publication archive:
←   →
Popular tags:
All tags
Last searches: