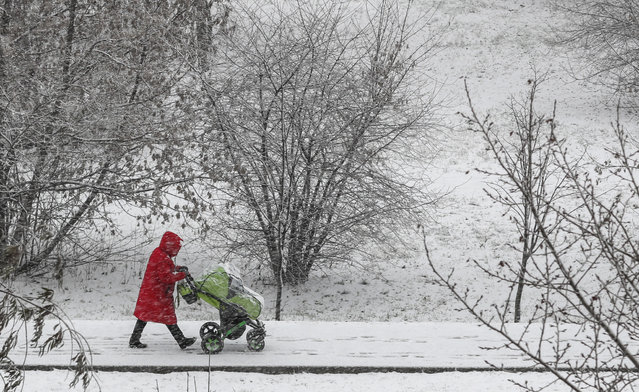 A Russian woman walks down a street with her child during a snowfall in Moscow, Russia, 12 November 2021. (Photo by Yuri Kochetkov/EPA/EFE) 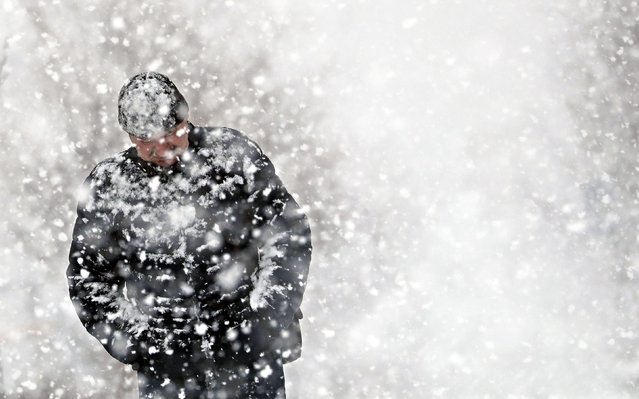 A man walks on a street during a snowfall in the town of Podolsk, outside Moscow, Russia, 12 November 2021. The temperature exceeded 2 degrees celsius in the Moscow region. (Photo by Maxim Shipenkov/EPA/EFE) 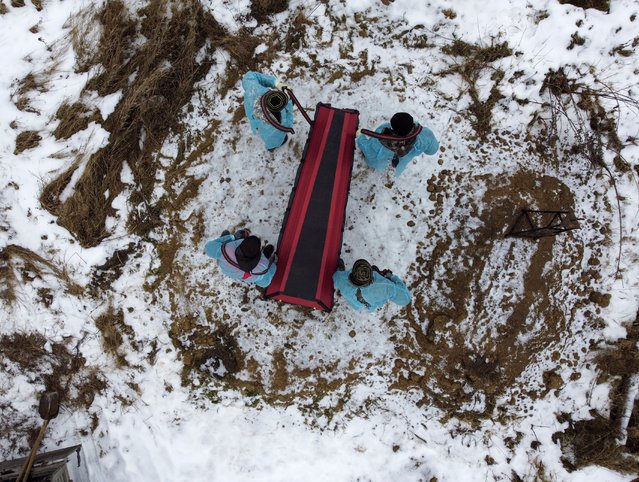 Grave diggers wearing protective face masks and wraps bury a person having no next of kin at a cemetery in the town of Tara in the Omsk region, Russia on November 12, 2021. Picture taken with a drone. (Photo by Alexey Malgavko/Reuters) 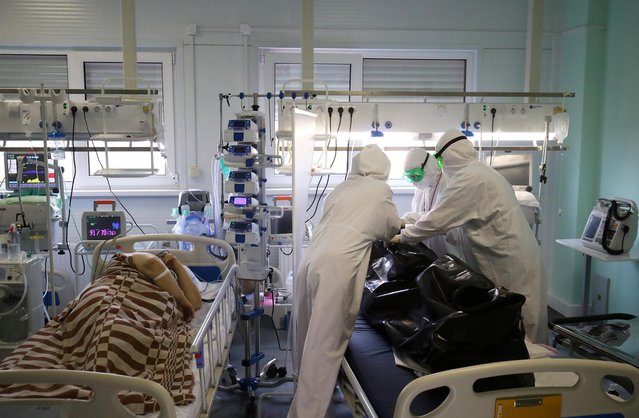 Medical specialists place the body of a person who died at the ICU unit for coronavirus disease (COVID-19) patients in a bag at a local hospital in the town of Kalach-on-Don in Volgograd Region, Russia on November 14, 2021. (Photo by Kirill Braga/Reuters) 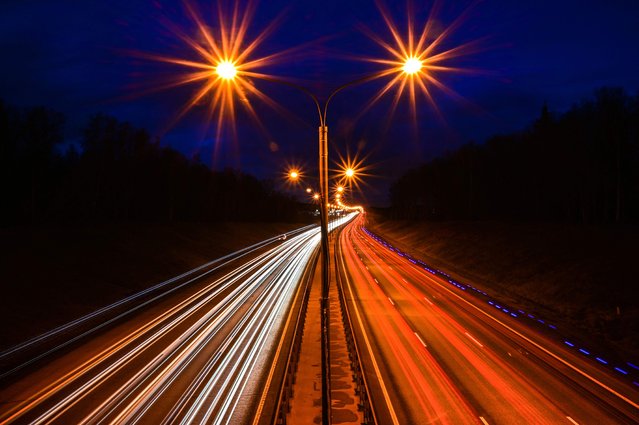 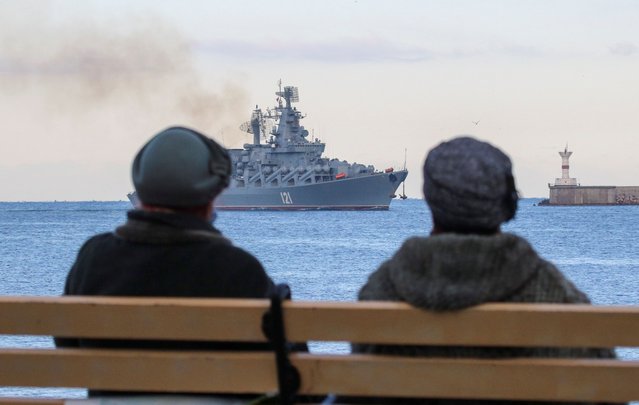 Women sit on a bench as the Russian Navy's guided missile cruiser Moskva (Moscow) sails back into a harbour after tracking NATO warships in the Black Sea, in the port of Sevastopol, Crimea on November 16, 2021. (Photo by Alexey Pavlishak/Reuters) 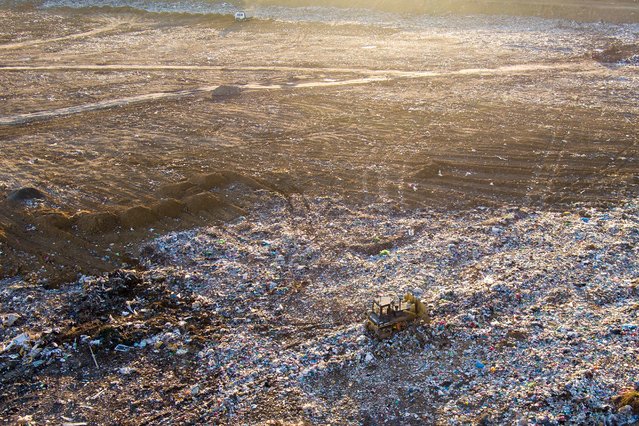 A view of a solid waste landfill at the Intermunicipal ecological waste processing facility in Volgodonsk, Rostov Region, Russia on November 14, 2021. The facility processes waste from the town of Volgodonsk and nine surrounding districts, inhabited by over 400,000 people. The facility consists of an automated waste sorting plant, a bio composting site, a solid household waste landfill, construction and bulky waste management equipment. The capacity of the facility is 200,000 tonnes of waste a year; over 30% of the waste is processed into compost; over 15% is sent for recycling to other regions. (Photo by Erik Romanenko/TASS) 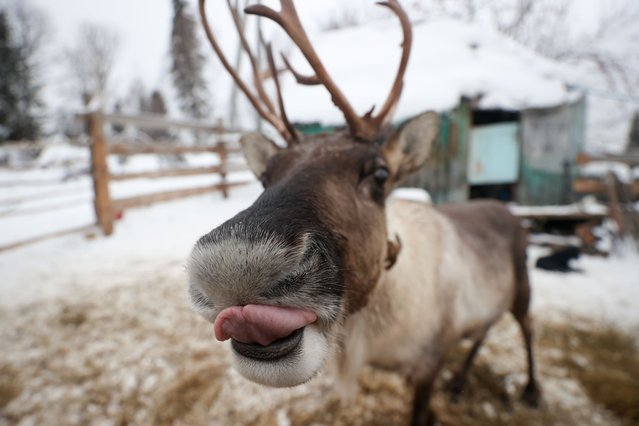 A reindeer is seen at the OleneGesh reindeer farm in the ski resort village of Sheregesh in Russia's Kemerovo Region, southwestern Siberia on November 14, 2021. (Photo by Kirill Kukhmar/TASS) 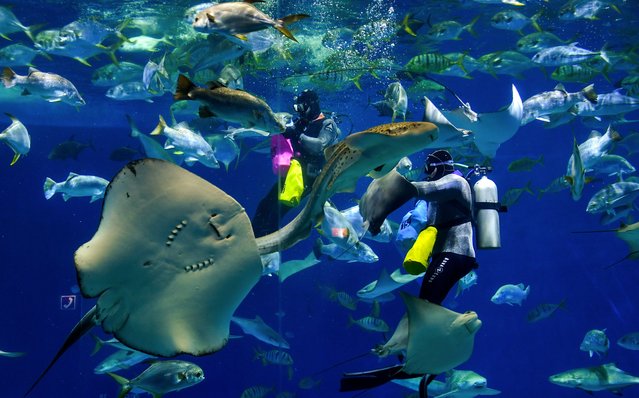 A diver feeds tropical fish at the Primorsky Aquarium under the Far East Branch of the Russian Academy of Sciences on Russky Island on November 17, 2021. Launched in 2016, it is considered one of the world's largest aquariums, a total area of its interior space exceeding 37,000sqm. (Photo by Yuri Smityuk/TASS) 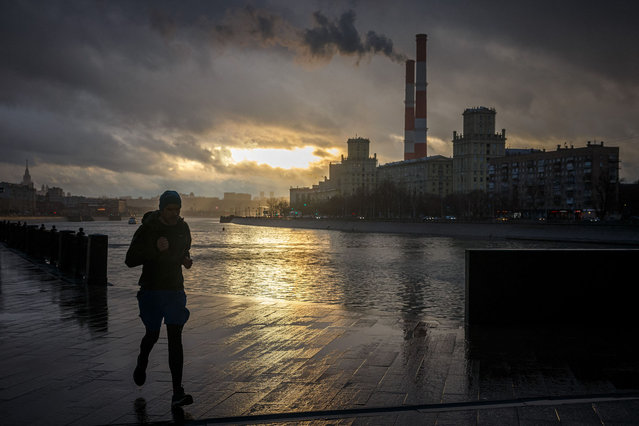 A jogger runs along an embankment of the Moskva River during a rainy day in Moscow on November 12, 2021. (Photo by Dimitar Dilkoff/AFP Photo) 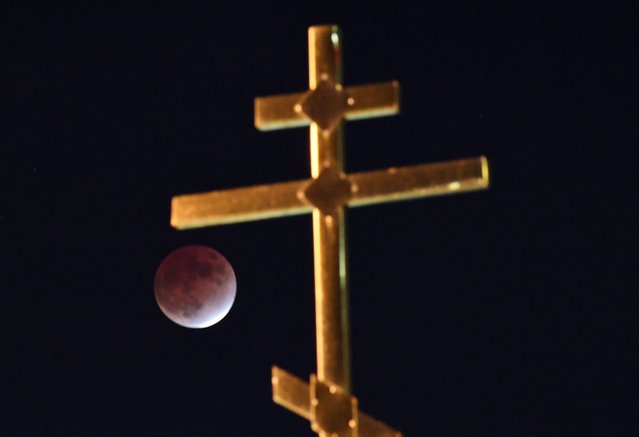 A partial lunar eclipse visible over the Saviour Transfiguration Cathedral under construction in Vladivostok, Russia on November 19, 2021. (Photo by Yuri Smityuk/TASS) 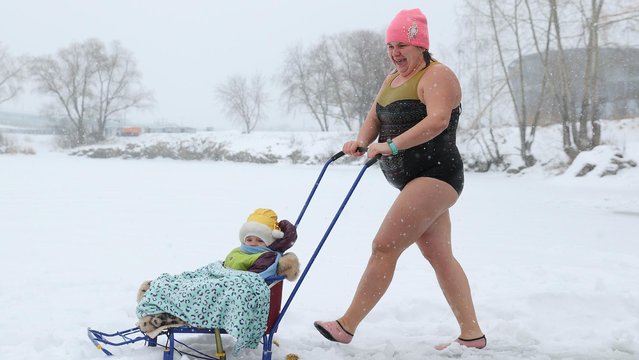 A member of a Novosibirsk winter swimming club and a child are seen by an ice hole on Lake Blyudtse in Novosibirsk, Russia on November 20, 2021. (Photo by Kirill Kukhmar/TASS) 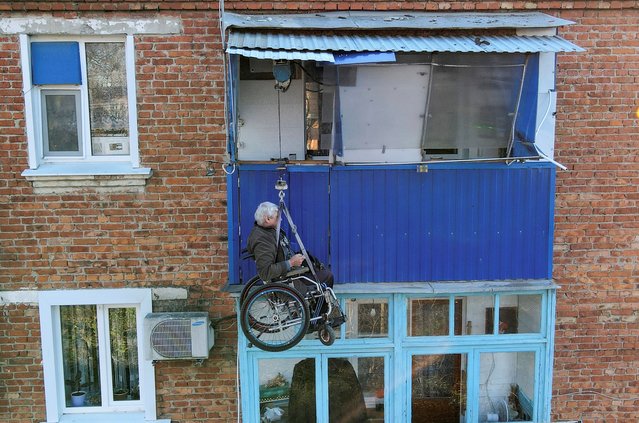 Local resident Alexander Yudin ascends to the balcony of his apartment on the third floor using a self-constructed elevator in the town of Timashevsk in the Krasnodar region, Russia, November 17, 2021. Electrician Alexander Yudin, who lost his leg in a car accident several decades ago and then lamed his second leg three years ago, constructed a solar-powered balcony elevator to leave his three-storey block of flats lacking any facilities for low-mobility residents. Picture taken with a drone. (Photo by Sergey Pivovarov/Reuters) 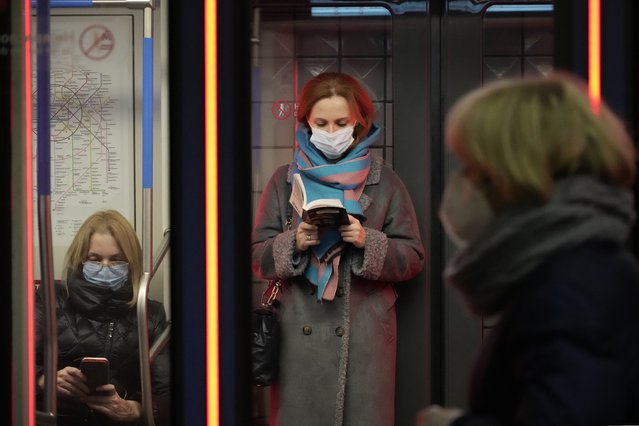 People wearing face masks travel on a metro train in Moscow, Russia, Thursday, November 18, 2021. Coronavirus deaths in Russia hit record highs for the second straight day Thursday, while new daily cases appeared to be taking a downward trend but still remained higher than during previous waves of the pandemic. (Photo by AP Photo/Stringer) 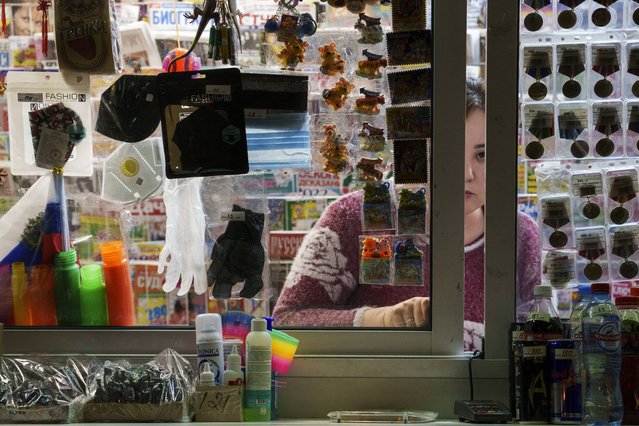 A seller waits for customers as protective masks and gloves are displayed in a kiosk in Moscow, Russia, Thursday, November 18, 2021. (Photo by AP Photo/Stringer) 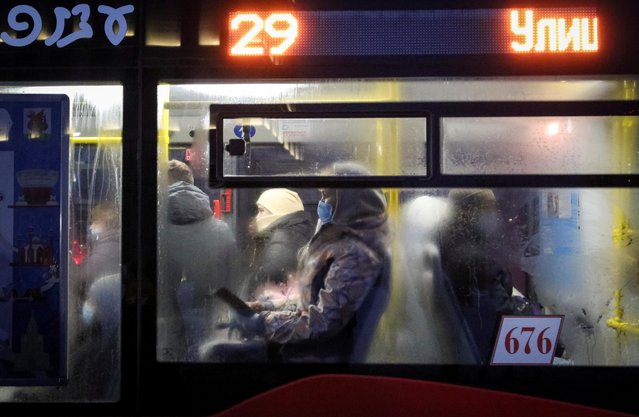 A passenger wears a face mask in a bus amid the outbreak of the coronavirus disease (COVID-19) in Kazan, Russia on November 22, 2021. (Photo by Artem Dergunov/Reuters) 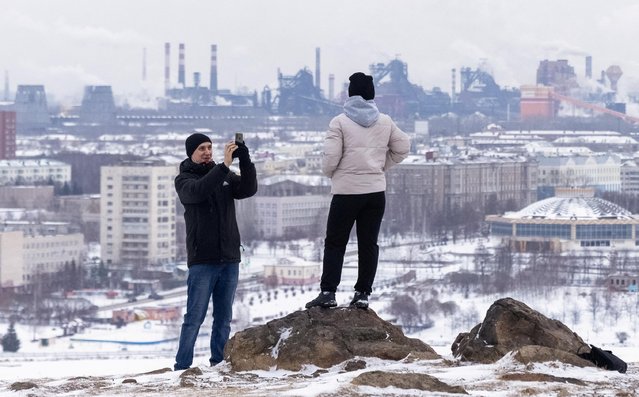 A man takes a picture of a woman with city centre and Nizhny Tagil metallurgical combinate NTMK owned by EVRAZ group in the background, in Nizhny Tagil, Russia on November 21, 2021. (Photo by Maxim Shemetov/Reuters) 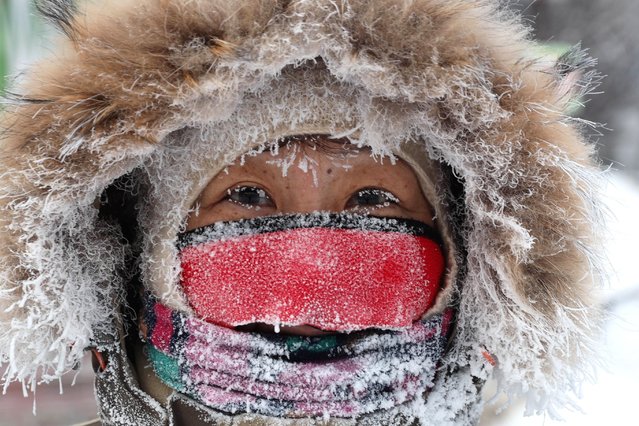 A man in Yakutsk, the capital of the Sakha Republic (Yakutia) in the Russian Far East on November 23, 2021. Located in Tuimaada Valley on the Lena River, Yakutsk is the largest city in the permafrost zone. On 23 November 2021, the daytime temperature ranged between –35 and –31 degrees Celsius in Yakutsk. On the night between 22 and 23 November, the temperature went down to –37 degrees Celsius. (Photo by Vadim Skryabin/TASS) 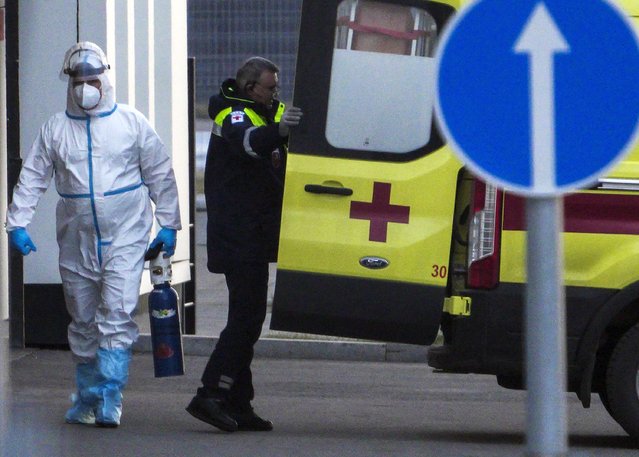