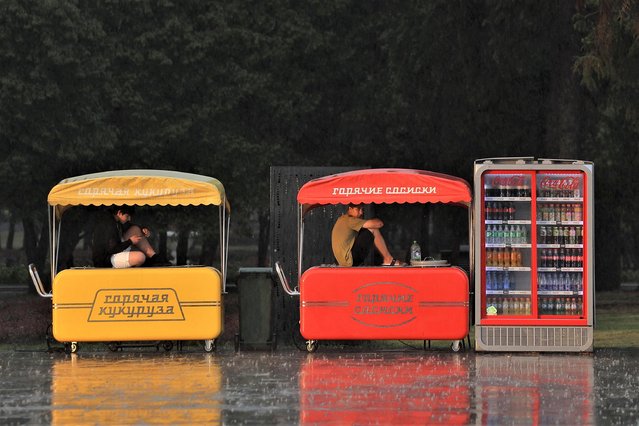 Vendors sit on kiosks as they take cover from heavy rain near the Northern River Station in Moscow, Russia on July 25, 2022. (Photo by Evgenia Novozhenina/Reuters) 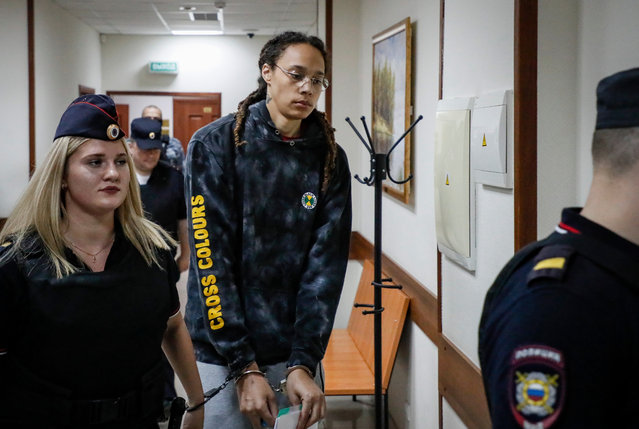 Two-time Olympic gold medalist and WNBA's Phoenix Mercury player Brittney Griner (C) is escorted to a courtroom for a hearing at the Khimki City Court outside Moscow, Russia, 26 July 2022. Griner, a World Champion player of the WNBA's Phoenix Mercury team was arrested in February at Moscow's Sheremetyevo Airport after some hash oil was detected and found in her luggage, for which she now could face a prison sentence of up to ten years. (Photo by Yuri Kochetkov/EPA/EFE) WNBA star and two-time Olympic gold medalist Brittney Griner stands in a cage at a court room prior to a hearing, in Khimki just outside Moscow, Russia, Tuesday, July 26, 2022. American basketball star Brittney Griner has returned to a Russian courtroom for her drawn-out trial on drug charges that could bring her 10 years in prison if convicted. (Photo by Alexander Zemlianichenko/Pool via AP Photo) 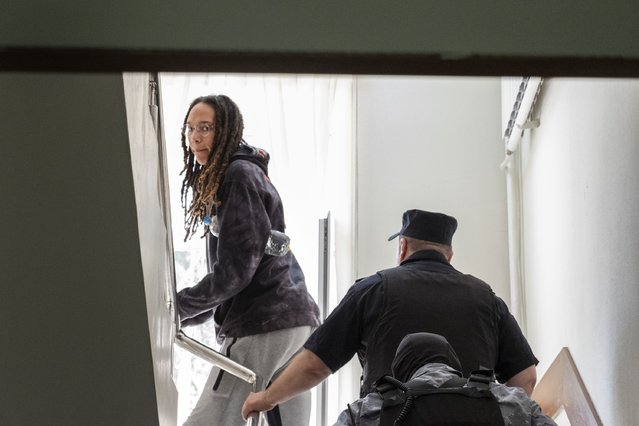 Brittney Griner leaves the Russian court in Moscow, Russia on July 26, 2022.(Photo for The Washington Post) 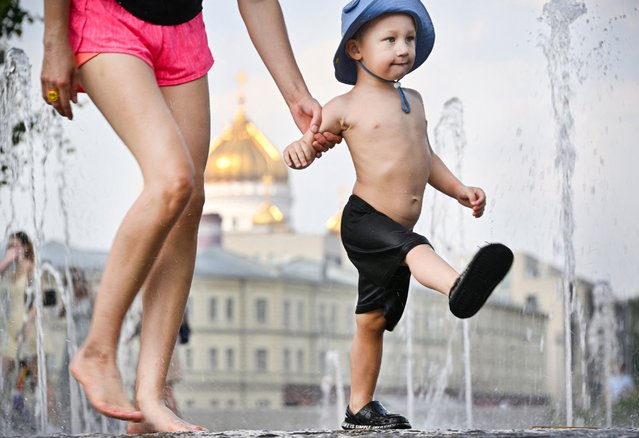 People refresh themselves in a fountain in central Moscow on July 27, 2022 in front of the Christ the Saviour cathedral. (Photo by Alexander Nemenov/AFP Photo) 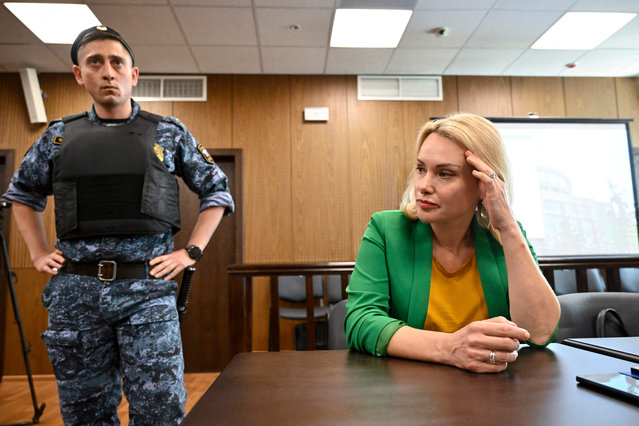 Marina Ovsyannikova, the journalist who became known internationally after protesting against the Russian military action in Ukraine during a prime-time news broadcast on state television, appears in court accused of “discrediting” the Russian army fighting in Ukraine over her remarks outside a Moscow court earlier this month in support of opposition activist Ilya Yashin, in Moscow on July 28, 2022. (Photo by Alexander Nemenov/AFP Photo) 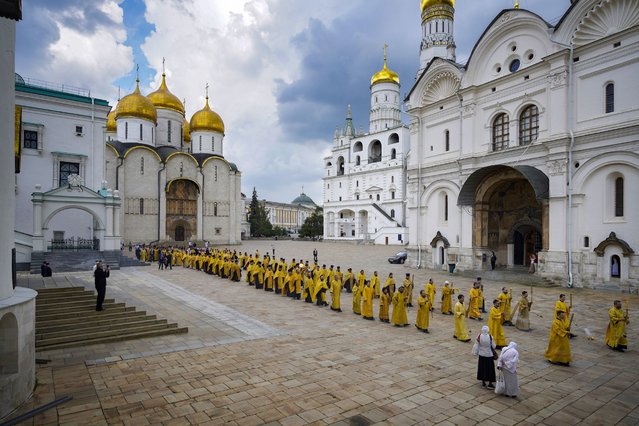 Russian warships sail along the Neva River during a rehearsal for the Navy Day parade in Saint Petersburg, Russia on July 28, 2022. (Photo by Anton Vaganov/Reuters) 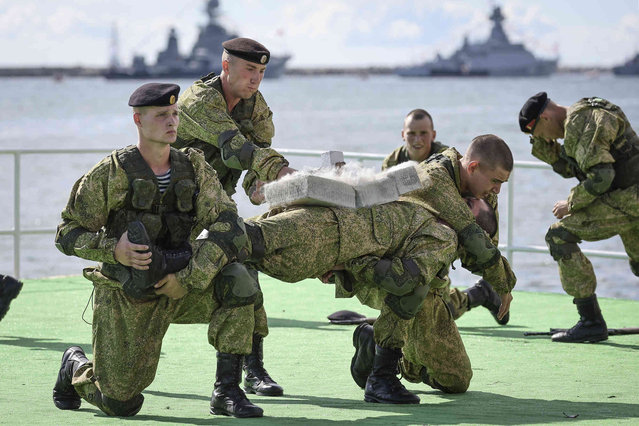 Russian marines show their skills during a rehearsal for the Naval parade in Baltiysk, a Navy base in Russian Baltic Sea exclave, Russia, Thursday, July 28, 2022 (Photo by AP Photo/Stringer) 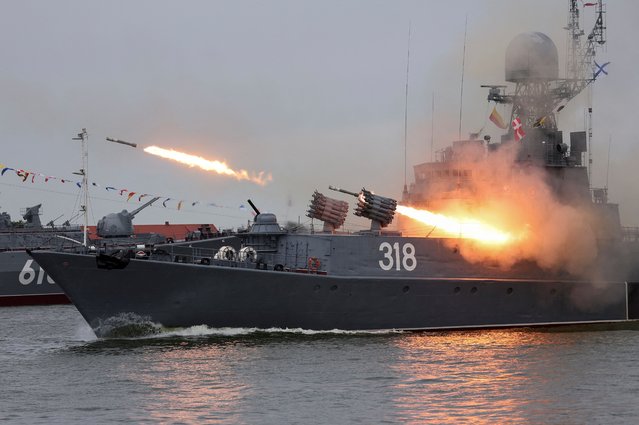 The Russian corvette Aleksin fires missiles during a parade marking Navy Day in Baltiysk in the Kaliningrad region, Russia on July 31, 2022. (Photo by Vitaly Nevar/Reuters) 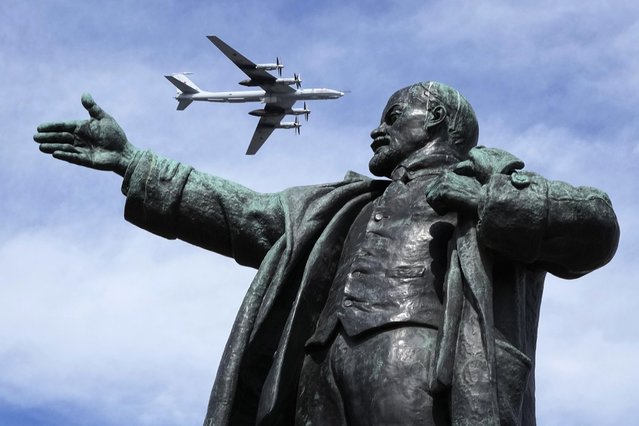 Tupolev Tu-142MK, a Soviet and Russian maritime reconnaissance and anti-submarine warfare aircraft flies above a statue of Soviet Union founder Vladimir Lenin during a rehearsal of the Naval parade in St.Petersburg, Russia, Thursday, July 28, 2022. The celebration of Navy Day in Russia is traditionally marked on the last Sunday of July and will be celebrated on July 31 this year. (Photo by Dmitri Lovetsky/AP Photo) 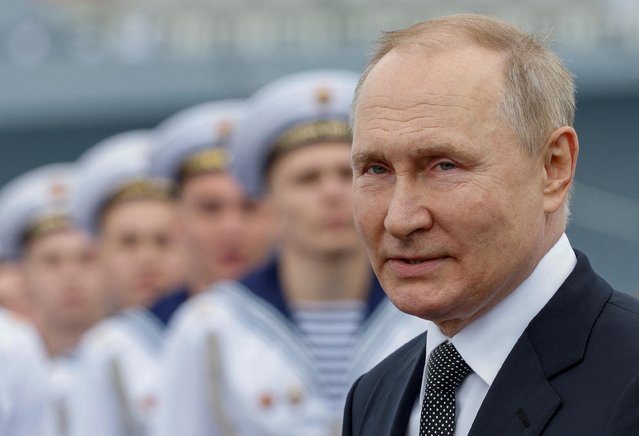 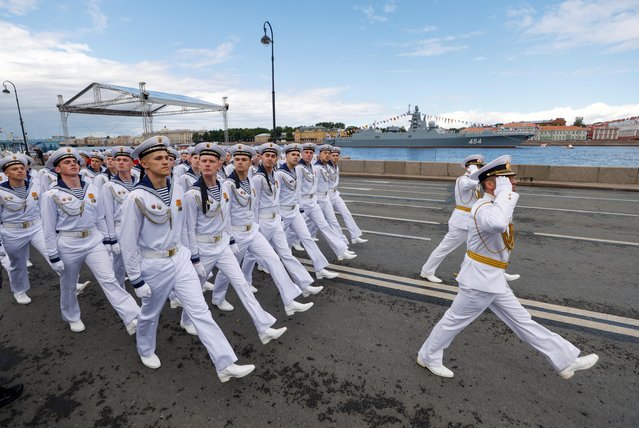 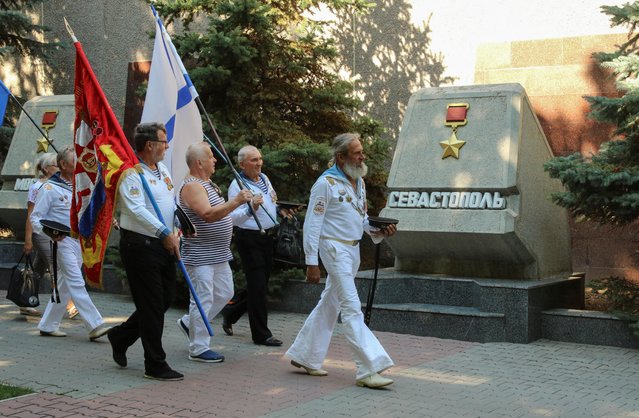 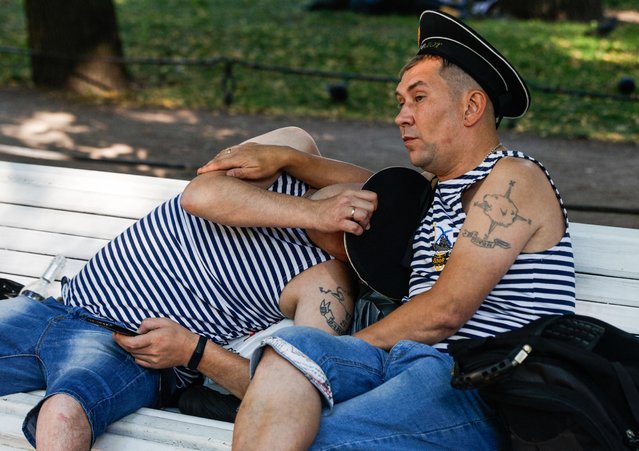 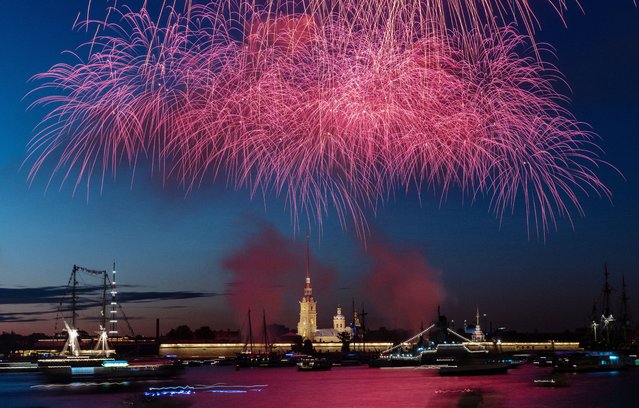 Fireworks explode over the Peter and Paul fortress and Neva river during Navy Day celebrations in Saint Petersburg, Russia on July 31, 2022. (Photo by Maxim Shemetov/Reuters) 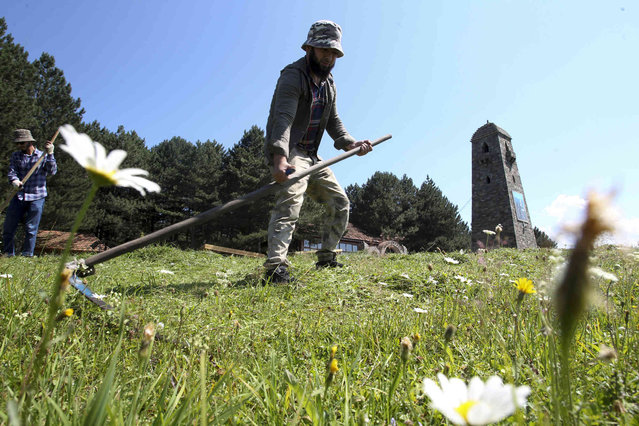 Chechen men mow the grass outside Benoy village, about 100 kilometers (63 miles) south of Grozny, with a model of the old Chechen tower, Russia, Monday, August 1, 2022. (Photo by Musa Sadulayev/AP Photo) 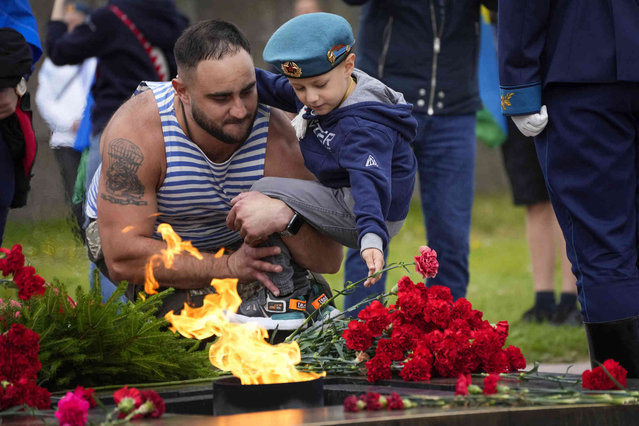 A former paratrooper and his son place flowers at an eternal flame during celebration for Paratroopers' Day in St. Petersburg, Russia, Tuesday, August 2, 2022. Paratroopers are an elite unit of the Russian Army, and everyone in the country recognizes their blue berets. (Photo by Dmitri Lovetsky/AP Photo) 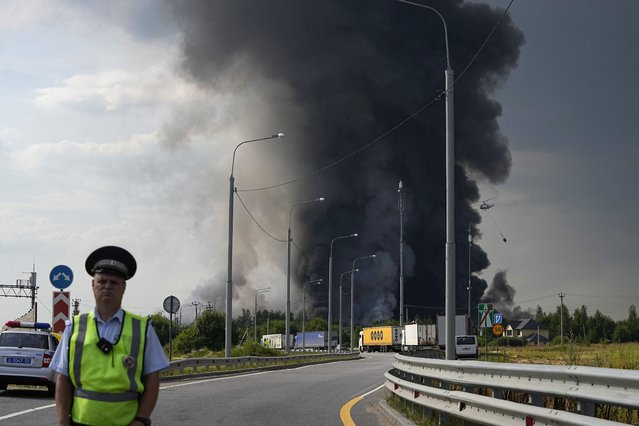 Smoke rises over a burning warehouse of the online retailer Ozon in Istra Municipal District, northwest Moscow Region, Russia, Wednesday, August 3, 2022. The fire, which erupted at the warehouse belonging to Russia's leading online retailer Ozon, has covered the area of 50,000 square meters and injured 11 people, two of whom were hospitalized. (Photo by Alexander Zemlianichenko/AP Photo) 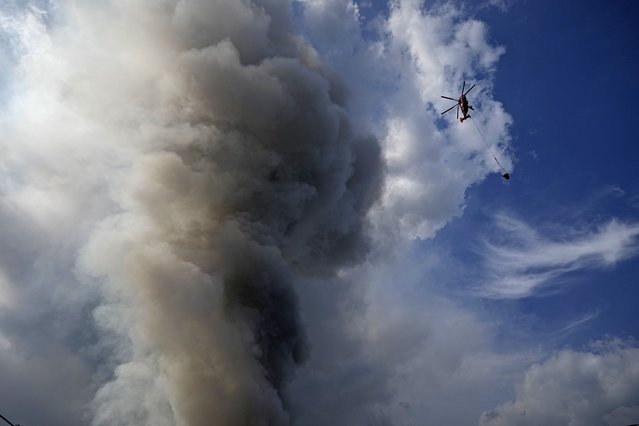