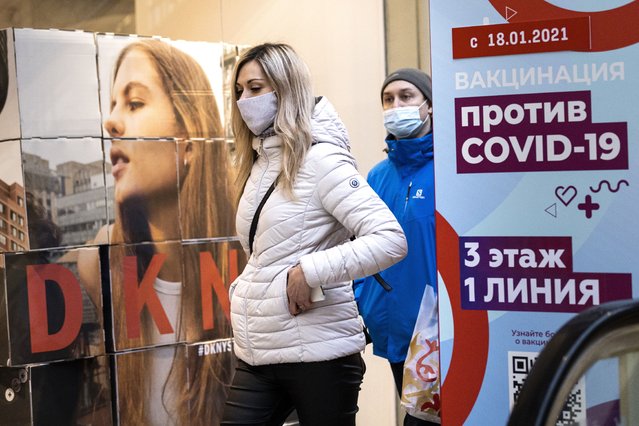 A woman wearing a face mask to protect against coronavirus walks past a poster reading “vaccination against COVID-19” at the GUM, the State Department store, near Red Square in Moscow, Russia, Wednesday, March 31, 2021. Russia has boasted about being the first country in the world to authorize a coronavirus vaccine and rushed to roll it out earlier than other countries, even as large-scale testing necessary to ensure its safety and effectiveness was still ongoing. (Photo by Alexander Zemlianichenko/AP Photo) 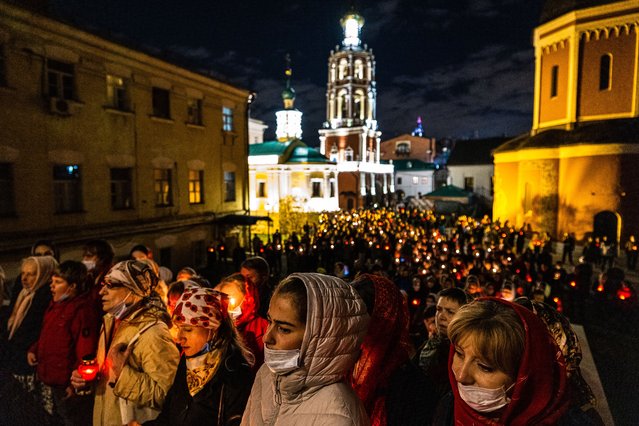 Worshippers attend an Orthodox Easter service in the Vysoko-Petrovsky Monastery in Moscow on May 2, 2021. (Photo by Dimitar Dilkoff/AFP Photo) 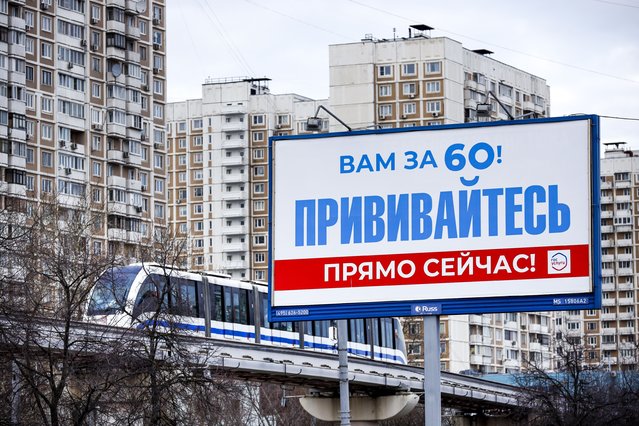 A monorail car rolls near a gait billboard reading “You're over 60! Get vaccinated immediately!” in Moscow, Russia, Sunday, April 4, 2021. To boost the demand, officials in Moscow this week started offering 1,000-ruble ($13) coupons to people over 60 for getting vaccinated. So far, the incentive hasn't elicited a lot of enthusiasm among elderly Muscovites. While some told the AP the initiative was helpful for those living off a relatively small pension, others complained about difficulties registering online to get the coupons or finding grocery stores where they could be used. (Photo by Alexander Zemlianichenko/AP Photo) 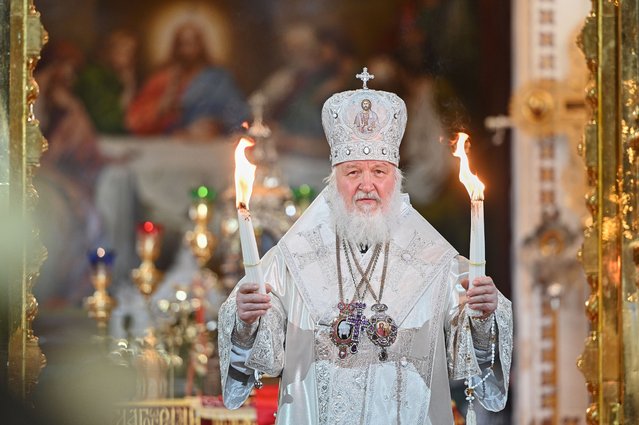 Head of Russia's Orthodox Church Patriarch Kirill conducts the Orthodox Easter service at the Cathedral of Christ the Saviour in Moscow, Russia on May 1, 2021. (Photo by Patriarchal Press Service/Handout via Reuters) 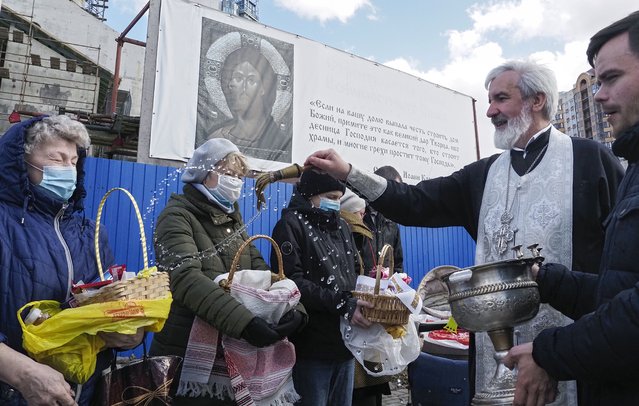 An Orthodox priest blesses traditional Easter cakes and painted eggs prepared for Easter celebration at a church in St. Petersburg, Russia, Saturday, May 1, 2021. Eastern Orthodox churches observe the ancient Julian calendar, and this year celebrate the Orthodox Easter on May 2. (Photo by Dmitri Lovetsky/AP Photo) 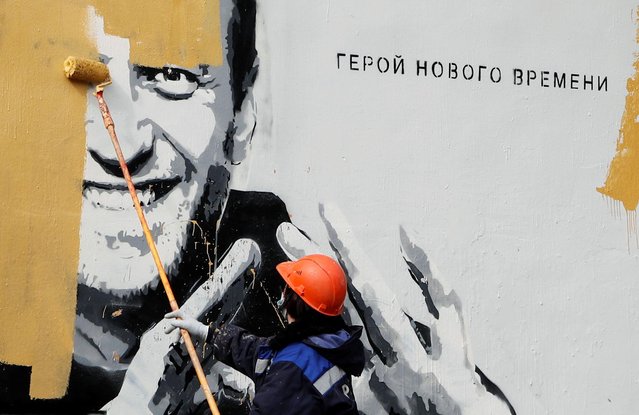 A worker paints over a graffiti depicting jailed Russian opposition politician Alexei Navalny in Saint Petersburg, Russia on April 28, 2021. The graffiti reads: “The hero of the new age”. (Photo by Anton Vaganov/Reuters) 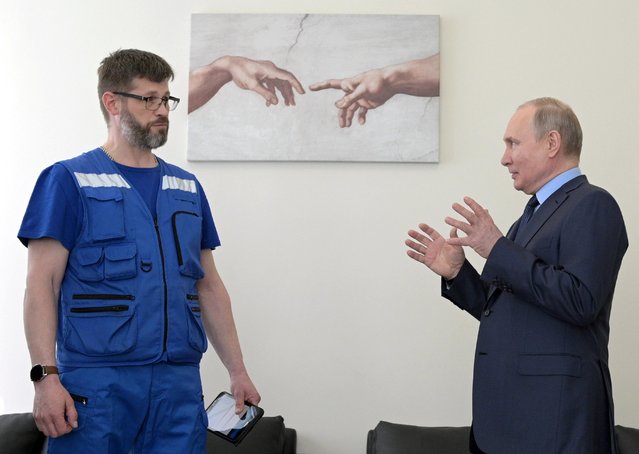 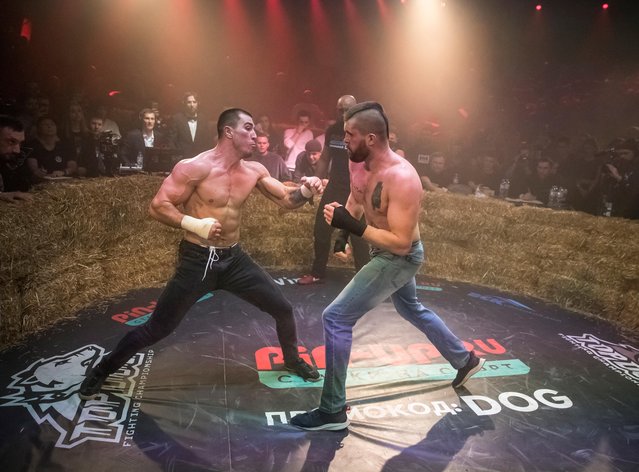 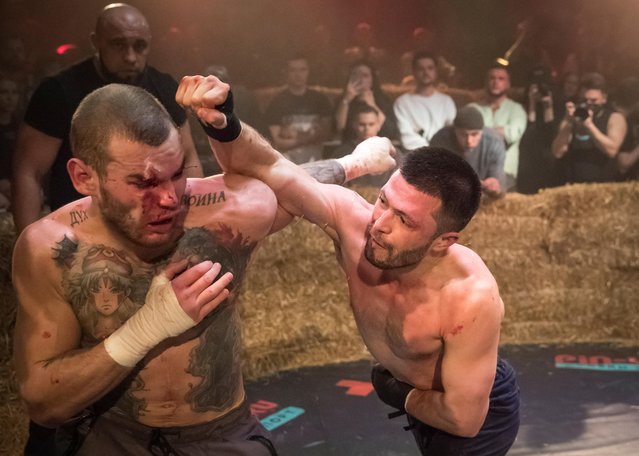 Danik Vesnenok and Danila Utenkov fight during the “Top Dog” bare-knuckle boxing tournament in Moscow, Russia on April 16, 2021. The tournament began broadcasting fights in parking lots in early 2020, but now rents out a Moscow sports arena for bare-knuckle bouts that are viewed online by millions. The most popular fight yet has been viewed over 13 million times on YouTube. The organizers attribute the sport's popularity to pent-up aggression because of COVID-19 restrictions and frustrations over the economy. (Photo by Shamil Zhumatov/Reuters) 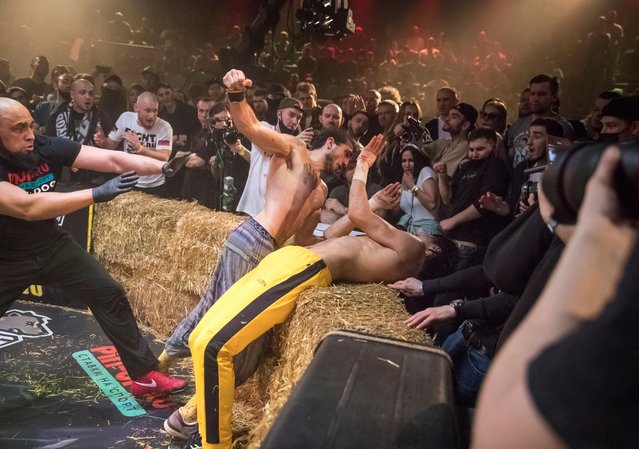 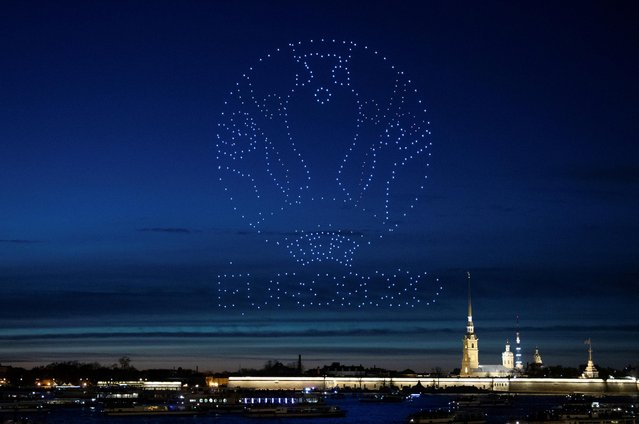 Drones forming a logo of the UEFA Euro Cup 2020 light up the sky over the Cathedral of Saints Peter and Paul in Saint Petersburg, Russia on May 2, 2021. (Photo by Anton Vaganov/Reuters) 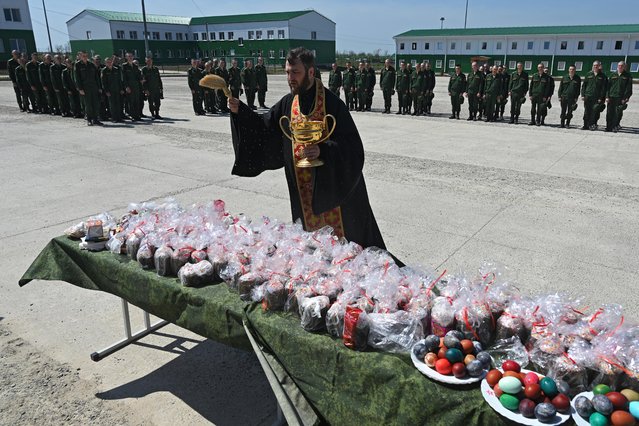 A priest sprinkles holy water on cakes and eggs during the Orthodox Easter celebrations at a military unit in the city of Novocherkassk in Rostov Region, Russia on May 2, 2021. (Photo by Sergey Pivovarov/Reuters) 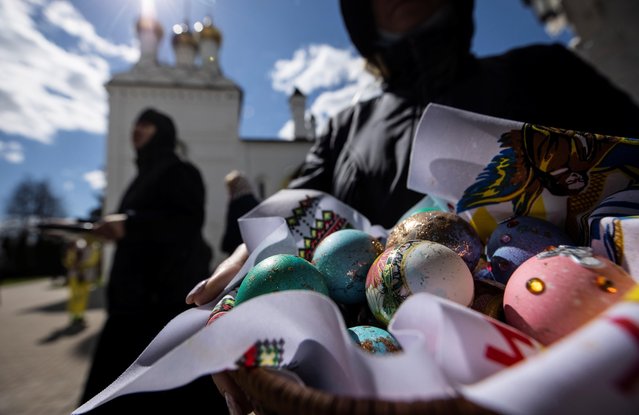 A woman shows her painted eggs on the eve of Orthodox Easter in the Joseph-Volokolamsk monastery in Moscow region, Russia on May 1, 2021. (Photo by Maxim Shemetov/Reuters) 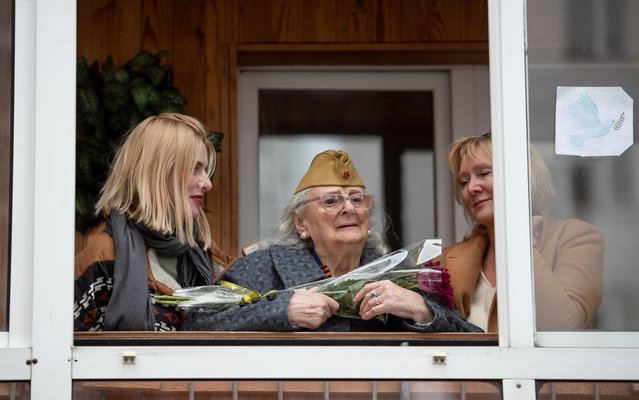 World War Two veteran Valentina Startseva, 96, accompanied by her daughter and granddaughter, watches a concert out of her balcony as she receives congratulations from members of the military-historical society “Krepost” (Fortress) on the upcoming Victory Day, which marks the anniversary of the victory over Nazi Germany, in Tomsk, Russia on May 4, 2021. (Photo by Taisiya Vorontsova/Reuters) 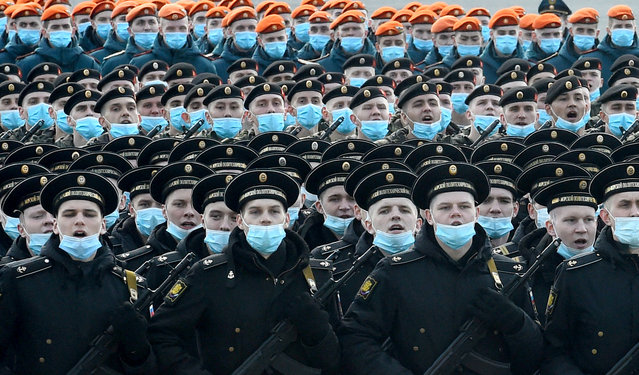 Russian servicemen take part in a rehearsal for the Victory Day military parade in Saint Petersburg on April 30, 2021. Russia will celebrate the 76th anniversary of the 1945 victory over Nazi Germany on May 9. (Photo by Olga Maltseva/AFP Photo) 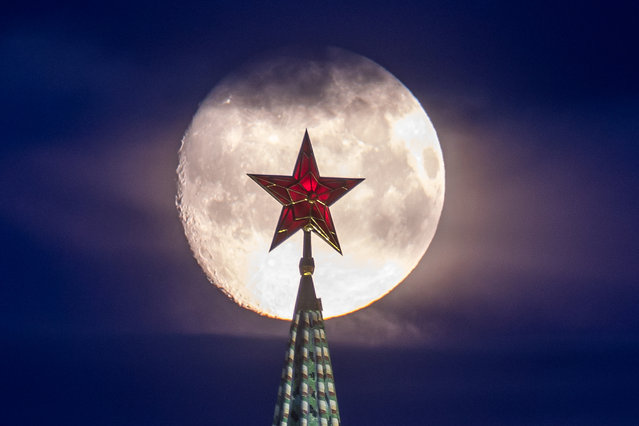 A star atop the Vodovzvodnaya Tower of the Moscow Kremlin is seen against a full moon in Moscow, Russia on April 25, 2021. (Photo by Marina Lystseva/TASS) 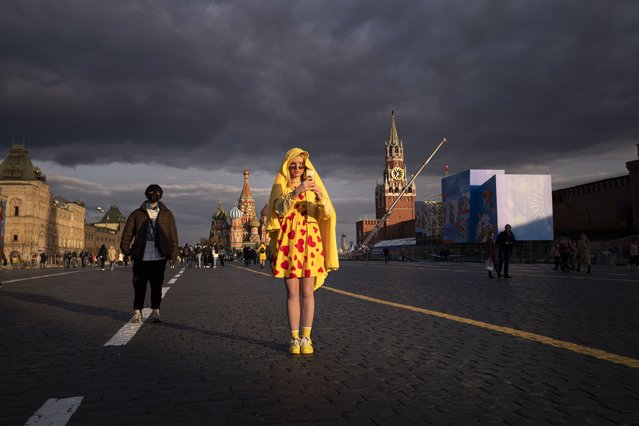 A young woman poses for a selfie at Red Square which is under preparations for the Victory Parade during sunset in Moscow, Russia, Monday, April 26, 2021. Russia will celebrate celebrate 76 years of the victory in WWII on May 9, 2021. (Photo by Alexander Zemlianichenko/AP Photo) 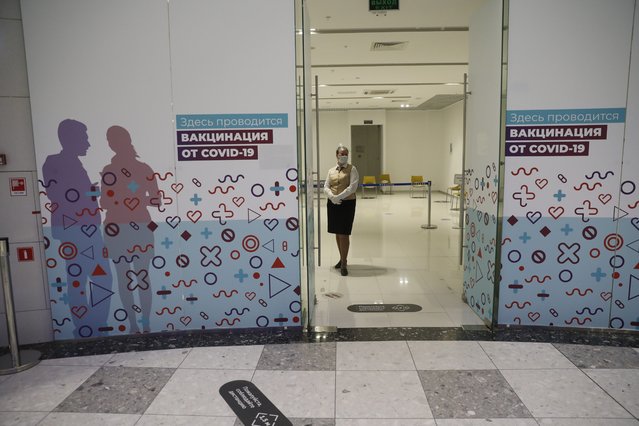 An employee stand waiting for customers at a vaccination point in Moscow, Russia, Wednesday, April 7, 2021. The low vaccine uptake hinges on several factors. Russian drug makers have been slow to ramp up mass production of the vaccine, leading to shortages in many regions last month. As more shots became available, people's unwillingness to get them emerged as another apparent problem. So far only 27.9 million two-dose sets have been produced, and only 15 million have been released into circulation after undergoing quality control. (Photo by Pavel Golovkin/AP Photo) 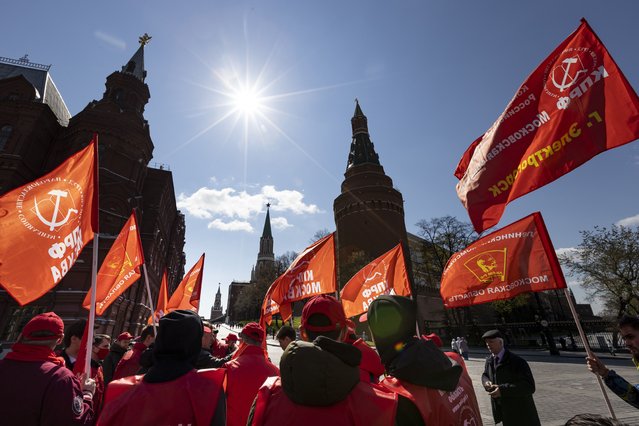 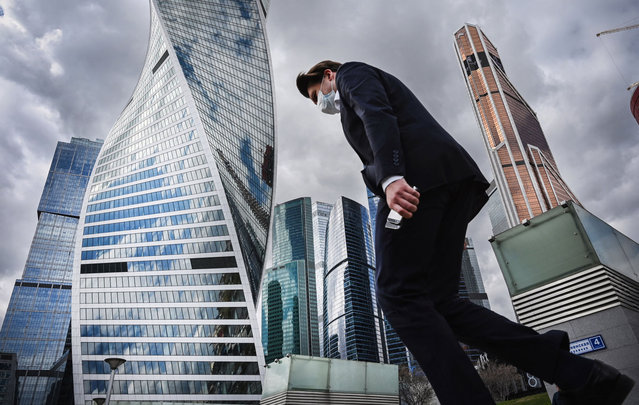