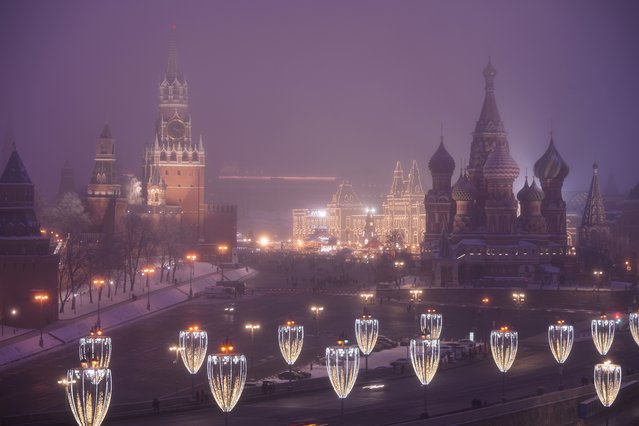 Red Square and the Kremlin are seen through evening fog in Moscow, Russia, Sunday, December 12, 2021. Presidents Joe Biden and Vladimir Putin spoke by phone on Thursday about the Russian troop buildup near Ukraine. It was a new round of leader-to-leader talks that come as the Kremlin has stepped up its calls for security guarantees and test fired hypersonic missiles to underscore its demands. (Photo by Alexander Zemlianichenko/AP Photo) 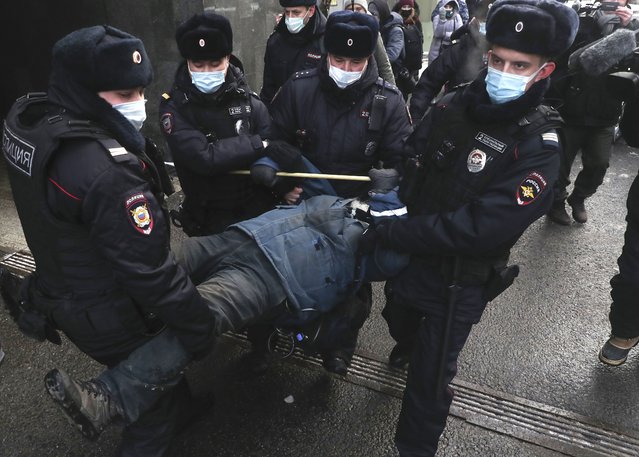 Police officers detain a demonstrator as people gather in front of the Supreme Court of the Russian Federation, in Moscow, Russia, Tuesday, December 28, 2021. Russia’s Supreme Court has ruled that one of the country’s oldest and most prominent human rights organizations should be shut down. The move is the latest step in a months-long crackdown on dissent. The Prosecutor General’s Office last month petitioned the Supreme Court to revoke the legal status of Memorial – an international human rights group that rose to prominence for its studies of political repression in the Soviet Union. (Photo by AP Photo/Stringer) 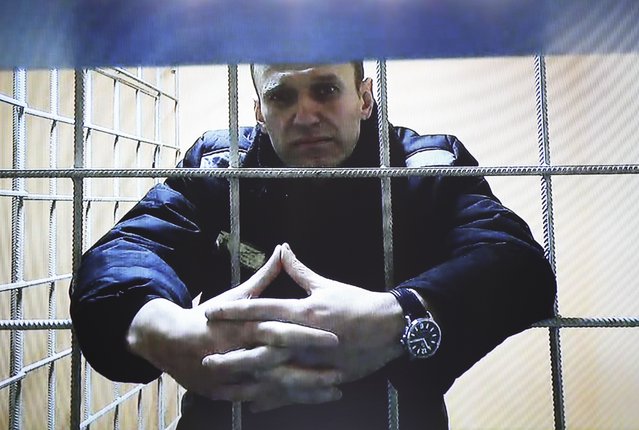 Russian opposition leader Alexei Navalny is seen in a video link from a prison, during a court session in Petushki, Vladimir region, about 120 kilometers (75 miles) east of Moscow, Russia, Tuesday, December 28, 2021. Jailed Russian opposition leader Alexey Navalny appears in the Petushinsky court via video link at a hearing on his lawsuit against his prison colony classifying him as posing a potential extremist or terrorist threat. (Photo by Evgeny Feldman/Meduza via AP Photo) 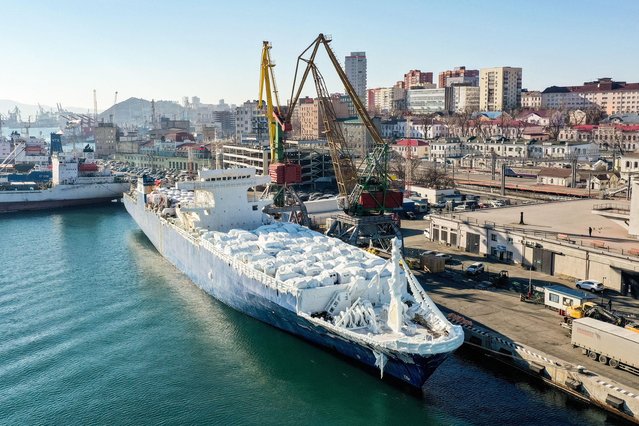 An ice-covered Sun Rio cargo ship carrying second-hand cars from Japan docks at the port in Vladivostok, Russia on December 28, 2021. Ship icing occurs when a humid sea wind and waves meet sub-zero air temperatures, and can increase the risk of a ship overturning. (Photo by Yuri Smityuk/TASS via Alamy Live News) 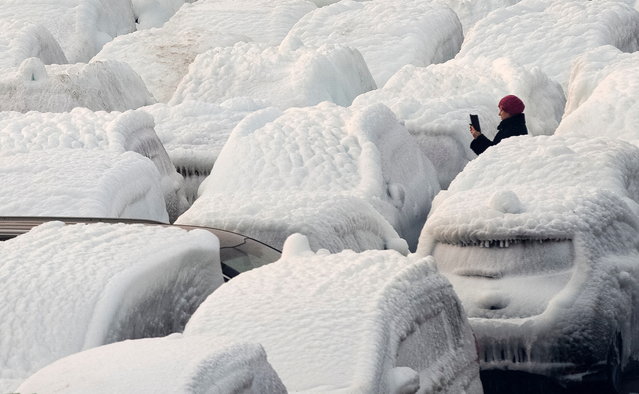 A woman takes a picture of ice-covered vehicles unloaded from the cargo ship Sun Rio, which was caught in severe weather conditions in the Sea of Japan, in the port of Vladivostok, Russia on December 29, 2021. (Photo by Tatiana Meel/Reuters) 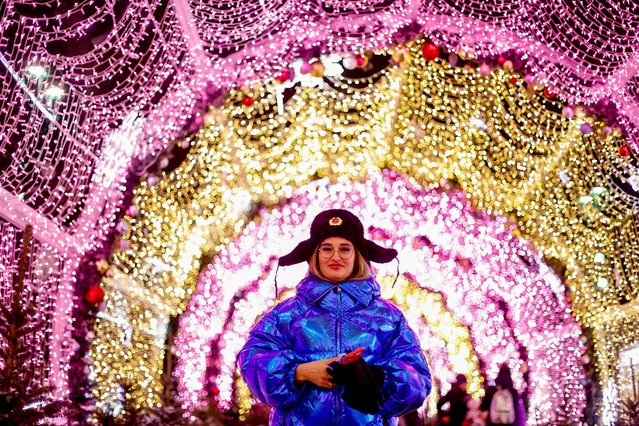 A photo shows decorations and structures illuminated with lights as Russia enters the new year amid loosened Covid-19 restrictions on December 28, 2021, in Moscow, Russia. The government allowed cafes, restaurants, bars and nightclubs to be open on New Year's Eve and celebration programs also will be organized in many cities across the country. (Photo by Sefa Karacan/Anadolu Agency via Getty Images) 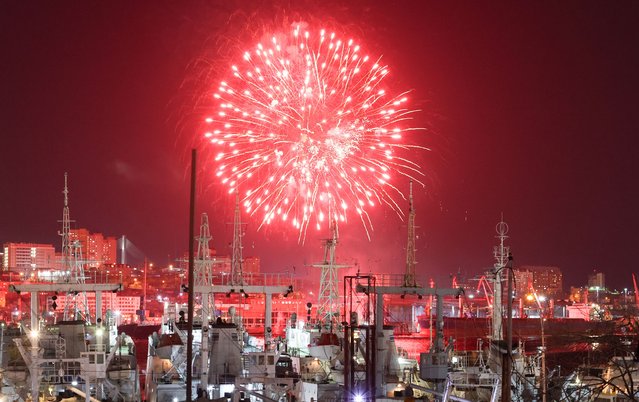 Fireworks go off over the city during New Year celebrations in Vladivostok, Russia on December 31, 2021. (Photo by Yuri Smityuk/TASS) 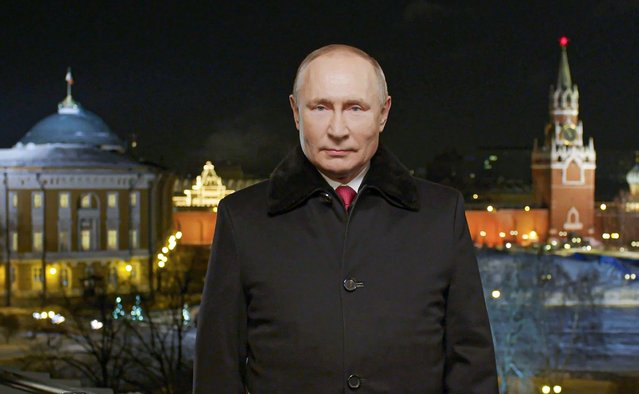 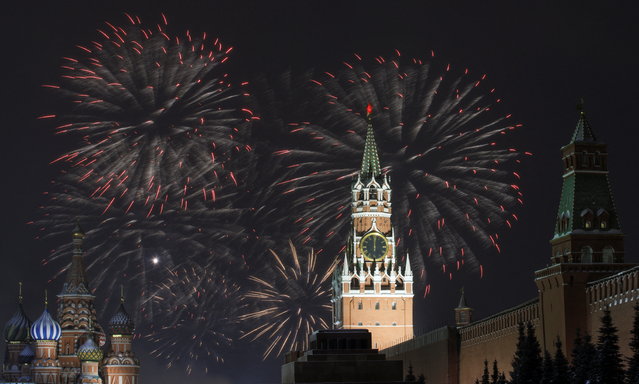 Fireworks explode in the sky over the Kremlin and St. Basil’s cathedral during the New Year's celebrations in Moscow, Russia on January 1, 2022. (Photo by Tatyana Makeyeva/Reuters) 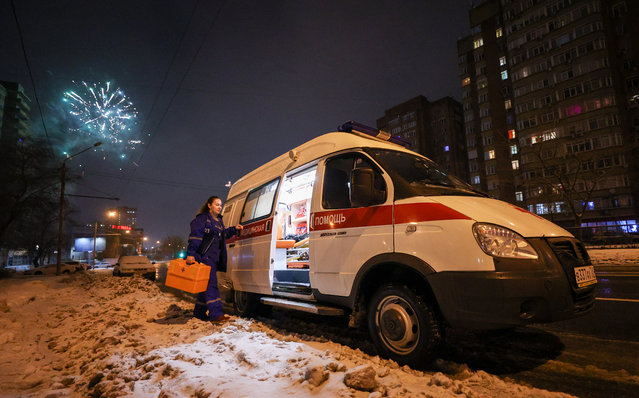 A paramedic enters an ambulance vehicle as she responds to a call received by Ambulance Station No 3 of Rostov-on-Don's Emergency Care Hospital on New Year's Day in Rostov-On-Don, Russia on January 1, 2022. (Photo by Erik Romanenko/TASS) 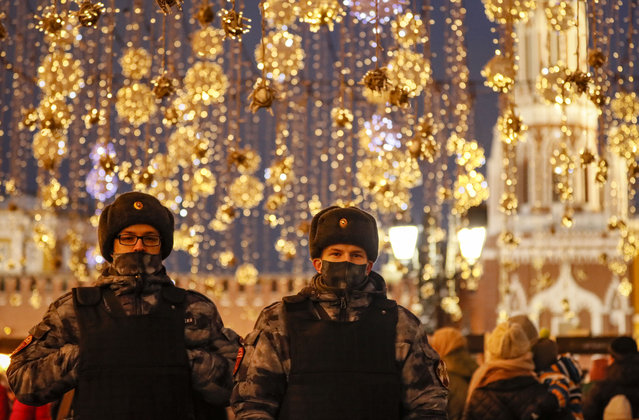 Policemen walk on the street decorated for the upcoming Christmas celebrations amid the Covid-19 coronavirus pandemic in Moscow, Russia, 03 January 2022. Muscovites are preparing to celebrate Christmas which is observed on 07 January, according to the Russian Orthodox Julian calendar 13 days after Christmas on 25 December on the Gregorian calendar. (Photo by Yuri Kochetkov/EPA/EFE) 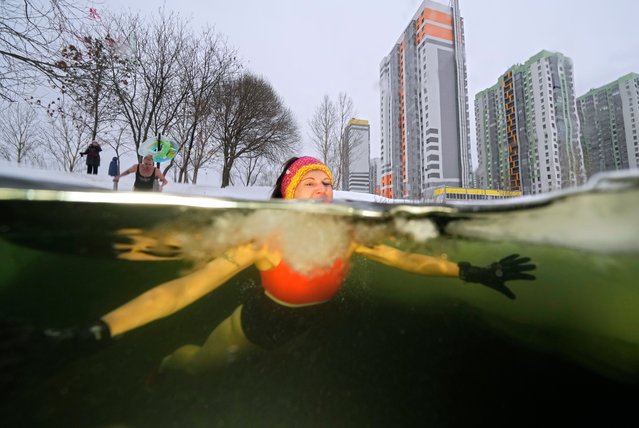 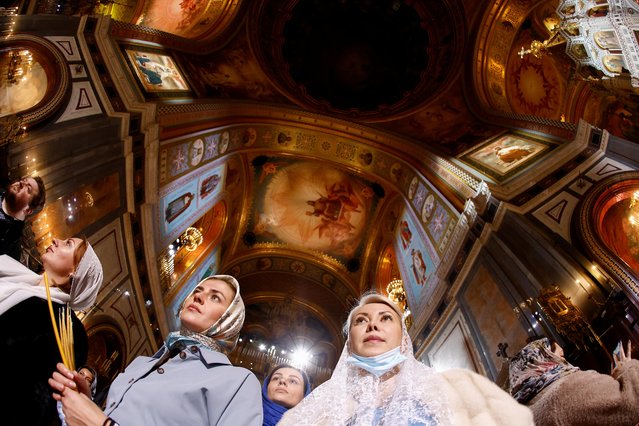 People attend the Orthodox Christmas service at the Cathedral of Christ the Saviour in Moscow, Russia, January 6, 2022. (Photo by Maxim Shemetov/Reuters) 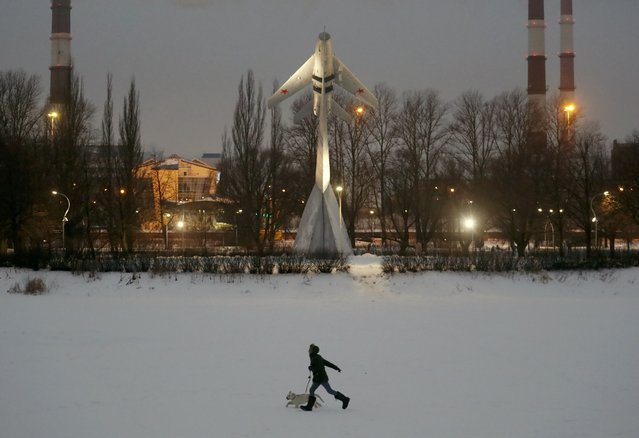 A woman runs with a dog in front of a MiG-19 fighter plane, a monument to military pilots in Aviators Park in St. Petersburg, Russia, 05 January 2022. Russians celebrate the Christmas which is observed on 07 January according to the Russian Orthodox Julian calendar, 13 days after Christmas on 25 December on the Gregorian calendar. (Photo by Anatoly Maltsev/EPA/EFE) 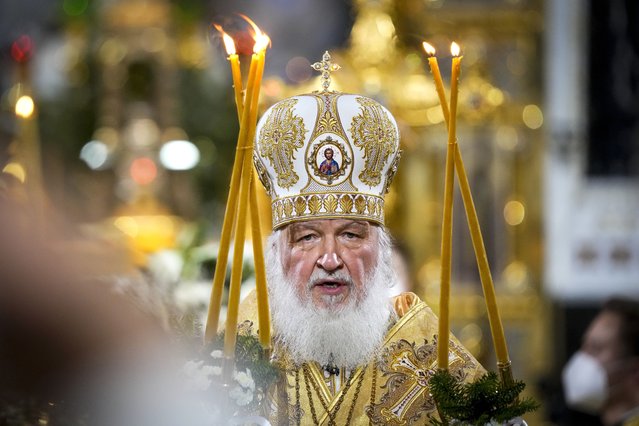 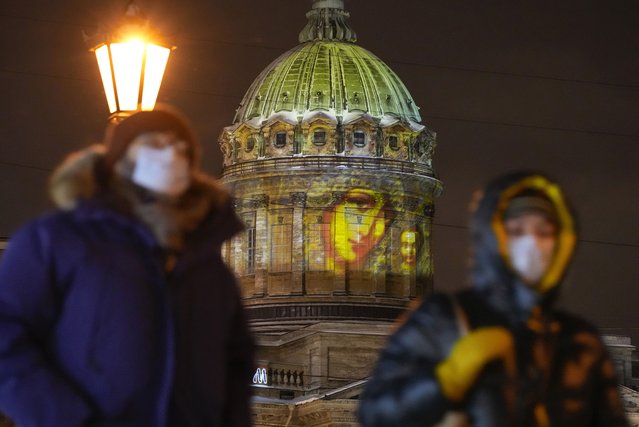 People walk past the Kazansky Cathedral with a projected Orthodox icon Virgin of Kazan during the Orthodox Christmas in St. Petersburg, Russia, Friday, January 7, 2022. Russian Orthodox believers celebrate Christmas in accordance to the Julian calendar on Jan. 7. (Photo by Dmitri Lovetsky/AP Photo) 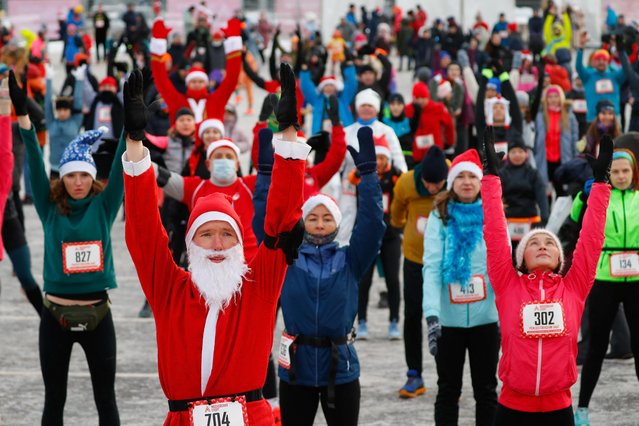 People, including participants dressed as Santa Claus, its Russian equivalent Father Frost and other characters, warm up before the Christmas race in Moscow, Russia on January 7, 2022. (Photo by Evgenia Novozhenina/Reuters) 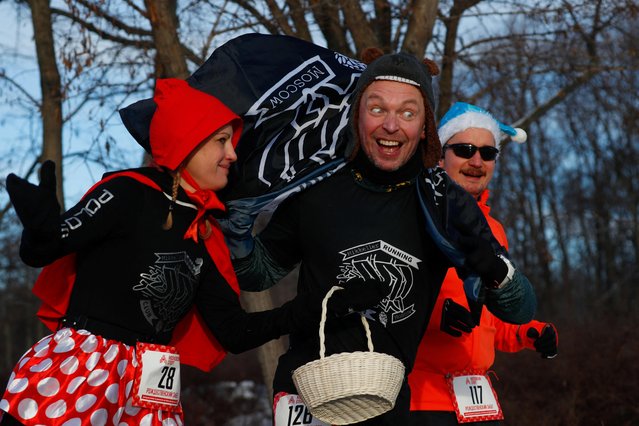 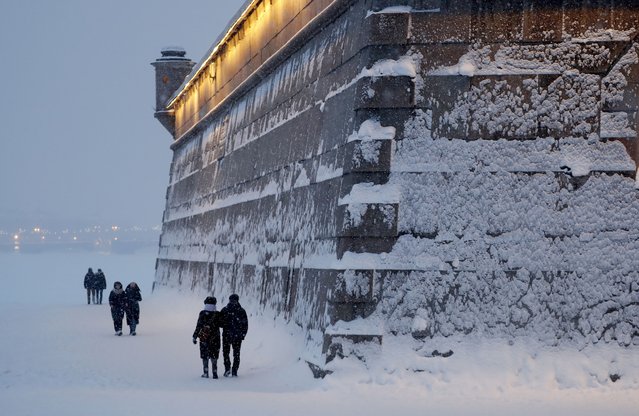 People walk along the wall of the Peter&Paul fortress during a snowfall in St. Petersburg, Russia, 09 January 2022. The temperatures have reached below three degrees Celsius in the second largest city of Russia. (Photo by Anatoly Maltsev/EPA/EFE)
Edit Del
14 Jan 2022 08:11:00, post received 0 comments
Publication archive:
←   →
Popular tags:
All tags
Last searches: