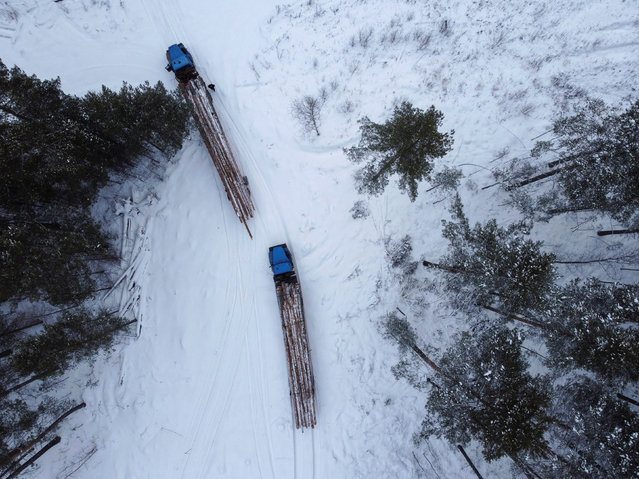 An aerial view shows trucks loaded with logs as specialists of a local forestry enterprise fell pine trees during wood procurement operations near the settlement of Muromtsevo in the Omsk region, Russia, November 23, 2021. (Photo by Alexey Malgavko/Reuters) 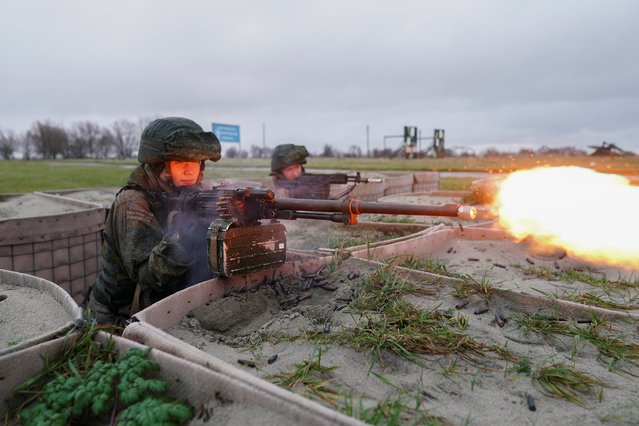 Marines of the Baltic Fleet forces of the Russian Navy train in the zone of obstacles during military exercises at the Khmelevka firing ground in the Kaliningrad region, Russia on November 24, 2021. (Photo by Vitaly Nevar/Reuters) 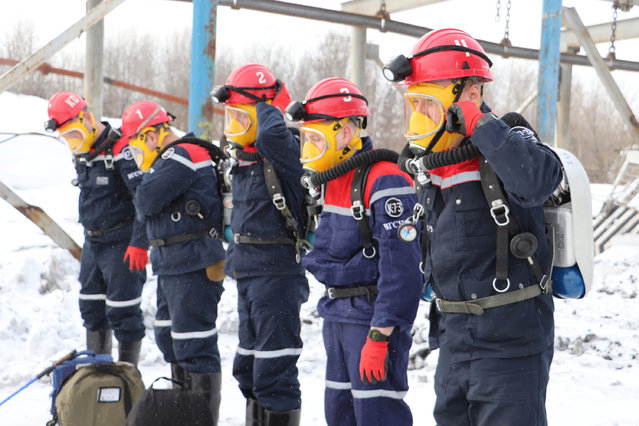 In this Russian Emergency Situations Ministry Thursday, November 25, 2021 photo, rescuers prepare to work at a fire scene at a coal mine near the Siberian city of Kemerovo, about 3,000 kilometres (1,900 miles) east of Moscow, Russia,. Russian authorities say a fire at a coal mine in Siberia has killed nine people and injured 44 others. Dozens of others are still trapped. A Russian news agency says the blaze took place in the Kemerovo region in southwestern Siberia. (Photo by Russian Ministry for Emergency Situations photo via AP Photo) 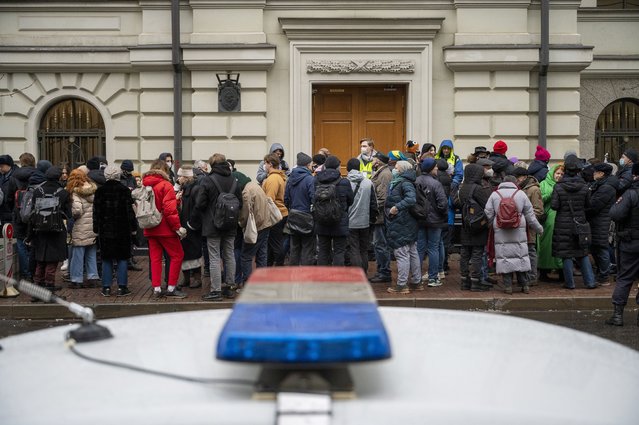 People gather in front of The Supreme Court of the Russian Federation in Moscow, Russia, Thursday, November 25, 2021. The Prosecutor General's Office earlier this month petitioned the Supreme Court to revoke the legal status of Memorial - an international human rights group that rose to prominence for its studies of political repressions in the Soviet Union. The move sparked much public outrage and is part of a months-long crackdown on dissent. (Photo by Dmitry Serebryakov/AP Photo) 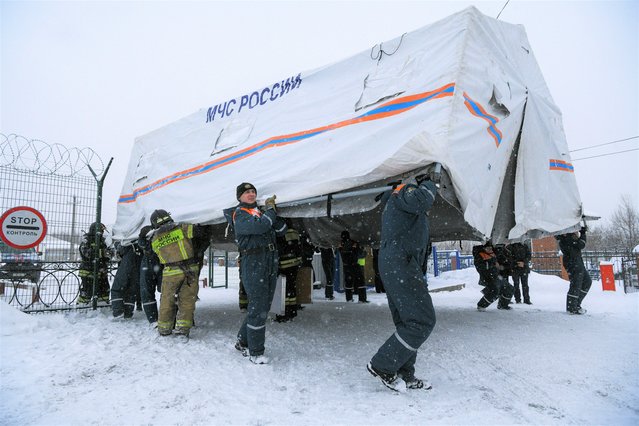 Specialists of Russian Emergencies Ministry carry a tent during a rescue operation following a fire in the Listvyazhnaya coal mine in the Kemerovo region, Russia, November 25, 2021. (Photo by Alexander Patrin/Reuters) 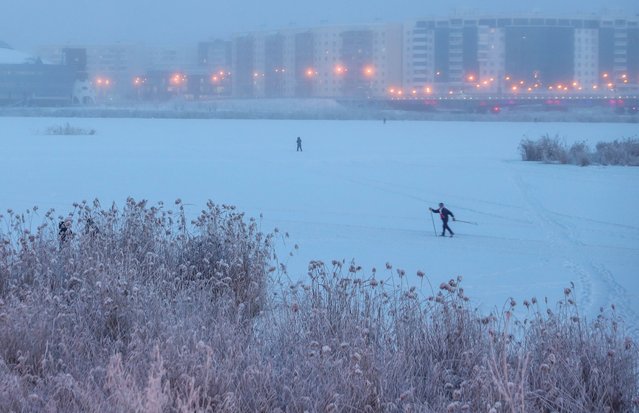 A man skis across frozen Lake Saisary in Yakutsk, the capital of the Sakha Republic (Yakutia) in the Russian Far East on November 22, 2021. Located in Tuimaada Valley on the Lena River, Yakutsk is the largest city in the permafrost zone. On 22 November 2021, the daytime temperature reached –34 degrees Celsius in Yakutsk. (Photo by Vadim Skryabin/TASS) 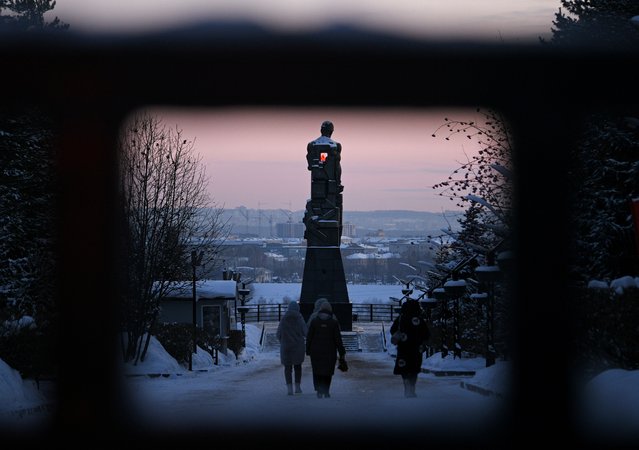 People walk to lay flowers at the monument “In Memory of Kuzbass Miners” to pay tribute to the miners and rescuers killed in an accident at the Listvyazhnaya coal mine in the Kemerovo region, in Kemerovo, Russia, November 26, 2021. (Photo by Alexander Patrin/Reuters) 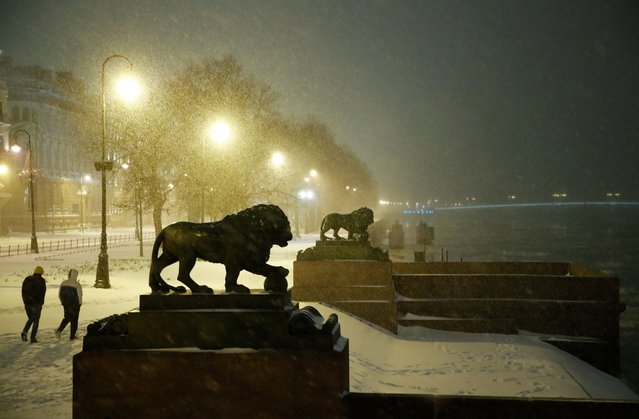 People walk along an embankment of the Neva River during snowfall in Saint Petersburg, Russia November 30, 2021. (Photo by Anton Vaganov/Reuters) 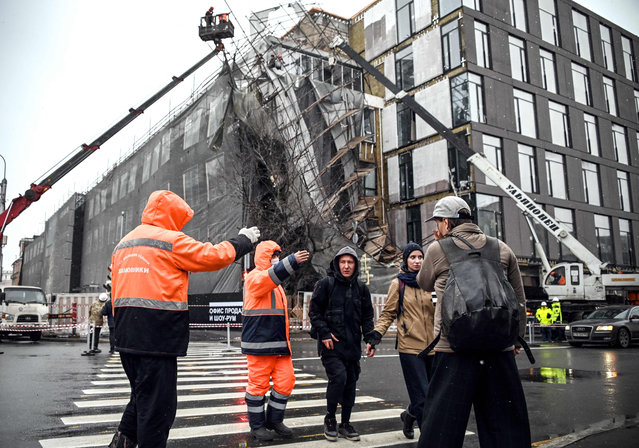 Municipal workers stops people trying to cross a street to a restricted area after scaffolding has collapsed during a storm in Moscow on November 30, 2021. (Photo by Alexander Nemenov/AFP Photo) 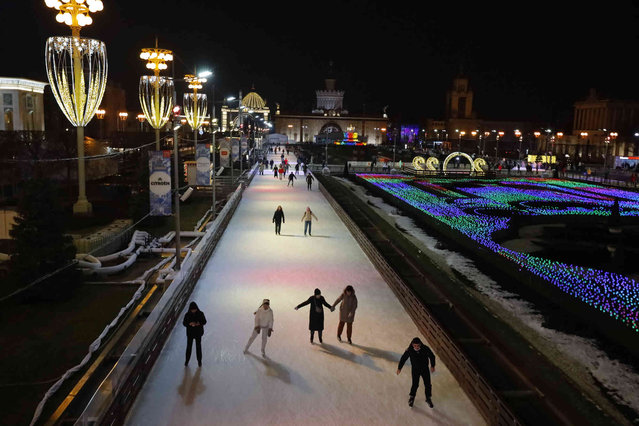 People skate during the opening of a skating rink at VDNKh, The Exhibition of Achievements of National Economy, in Moscow, Russia, on Friday, November 26, 2021. The area of artificial ice cover is more than 20,000 sq. meters. (Photo by Alexander Zemlianichenko Jr./AP Photo)

People walk on a street during a snowfall in Moscow, Russia, 30 November 2021. Temperatures dropped to -2 degrees Celsius in Moscow, accor​ding to reports of the meteorologist service. (Photo by Maxim Shipenkov/EPA/EFE) 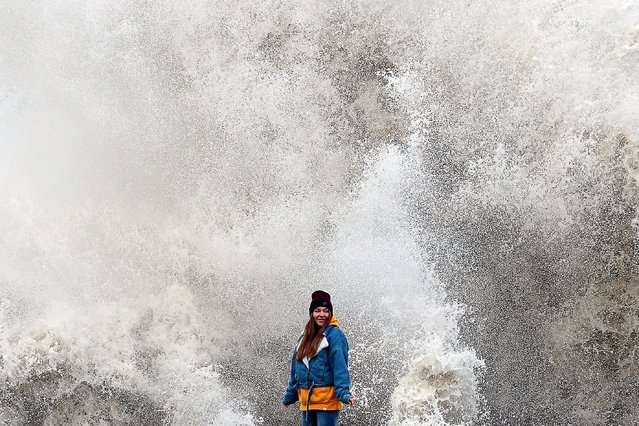 A young woman watches waves crash over the seafront in the Black Sea resort of Sochi, Russia during a storm on December 1, 2021. (Photo by Dmitry Feoktistov/TASS) 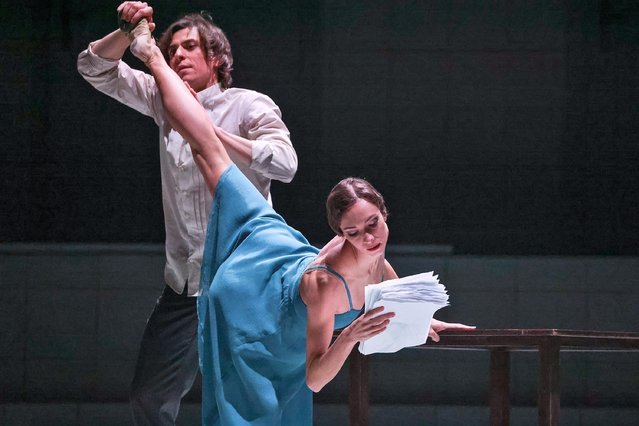 Principal dancer Olga Smirnova as Margarita (front) and principal dancer Denis Savin as Master perform during the final dress rehearsal of the ballet adaptation of Bulgakov’s novel “Master and Margarita” choreographed by Edward Clug and set to music by Alfred Schnitke and Milko Lazar at the New Stage of the Bolshoi Theatre in Moscow, Russia on November 30, 2021. The ballet production is to be premiered on 1 December. (Photo by Vladimir Gerdo/TASS) 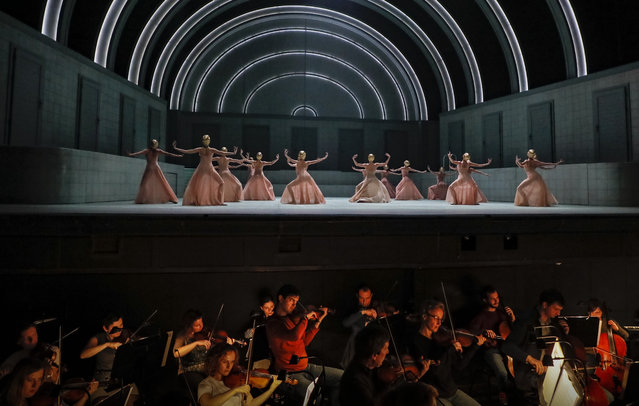 Dancers perform during a dress rehearsal of the ballet “The Master and Margarita” to music by Alfred Schnittke and Milko Lazara at the New Stage of the Bolshoi Theater in Moscow, Russia, 30 November 2021. (Photo by Yuri Kochetkov/EPA/EFE) 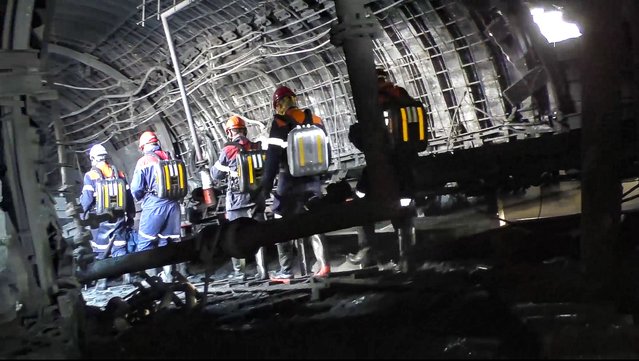 In this handout photo taken from video released by Russian Emergency Ministry Press Service, rescuers step down to work at a coal mine near the Siberian city of Kemerovo, about 3,000 kilometres (1,900 miles) east of Moscow, Russia, Thursday, December 2, 2021. Putin on Thursday warned officials to strictly observe industrial safety regulations in the wake of last week's coal mine explosion that killed 51 miners and rescuers. The devastating methane blast at the Listvyazhnaya mine, in the Kemerovo region of southwestern Siberia, was the deadliest mine accident in Russia since 2010. Most of the bodies are yet to be recovered. (Photo by Russian Emergency Ministry Press Service via AP Photo) 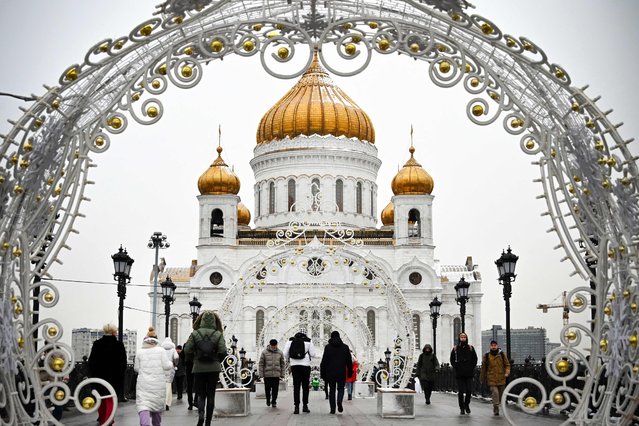 Pedestrians walk through the Christmas decorations in front of Christ the Saviour cathedral, the main Russian Orthodox church, in Moscow, on December 2, 2021. (Photo by Alexander Nemenov/AFP Photo) 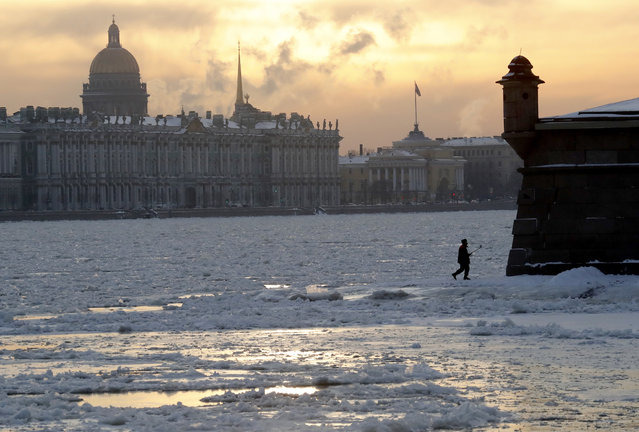 A man makes a selfie near the freezing Neva River with St. Isaac's Cathedral and The Admiralty on the background, during sunset in St. Petersburg, Russia, 02 December 2021. Temperatures dropped to minus ten degrees Celsius in the second largest city of Russia. (Photo by Anatoly Maltsev/EPA/EFE) 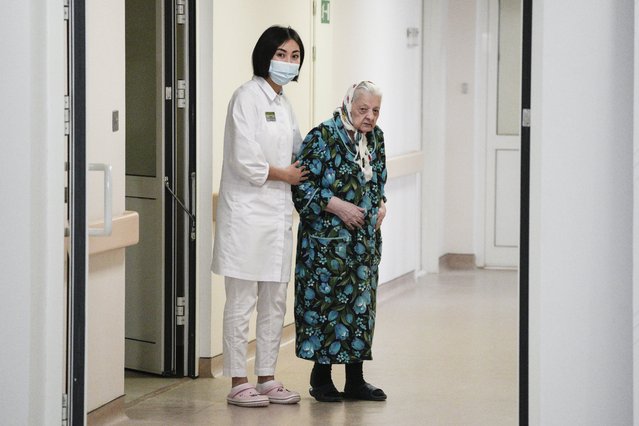 Dr. Saltanat Bekeeva, left, and 101-year-old patient Pelageya Poyarkova enter the hall to speak with media as she leaves the recovery ward for COVID-19 patients at the Federal Center for Brain and Neurotechnology in Moscow, Russia, Friday, December 3, 2021. Russia has reported more than 9.7 million confirmed cases of COVID-19 in the pandemic and more than 270 thousands deaths, which experts believe could be undercounts. (Photo by Pavel Golovkin/AP Photo) 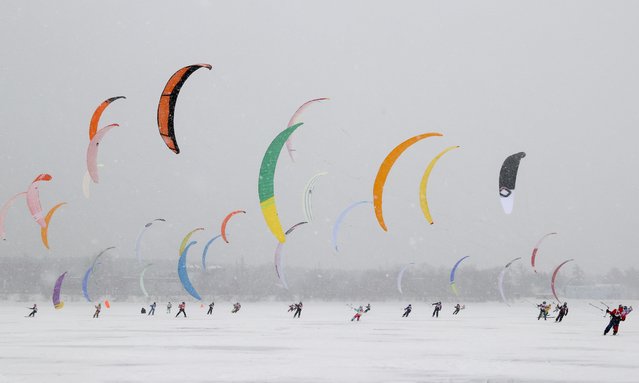 Participants in the 2021 Siberia Snowkiting Cup held on the Berd Bay of the Novosibirsk Reservoir near the city of Novosibirsk, Russia on December 3, 2021. (Photo by Kirill Kukhmar/TASS) 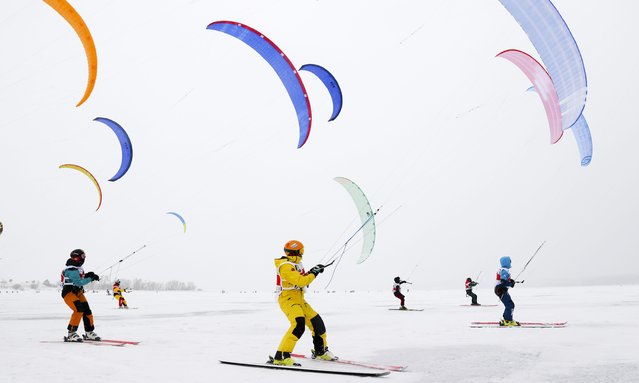