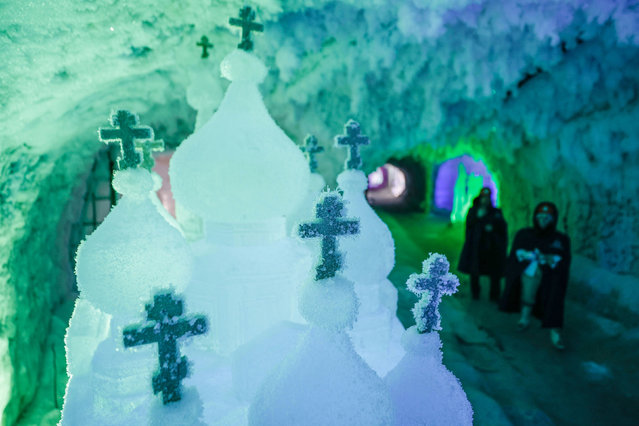 People visit the Kingdom of Permafrost museum inside the Soviet-era tunnels on the outskirts of the town of Yakutsk in the Republic of Sakha (Yakutia), Russia, September 6, 2021. (Photo by Maxim Shemetov/Reuters) 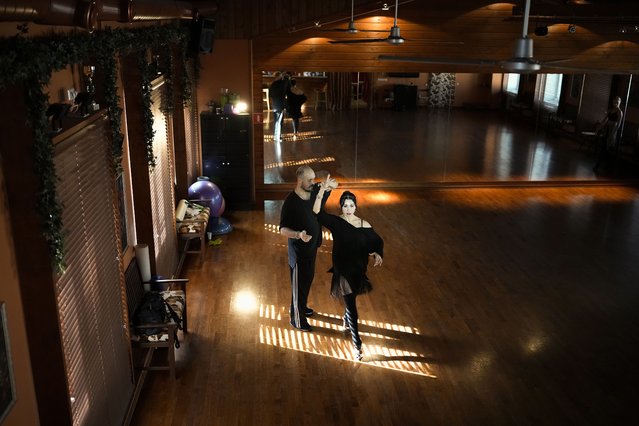 Oksana Kagno and her dance teacher Yuri Nezdoiminoga perform during a rehearsal in Moscow, Russia, Wednesday, September 29, 2021. Kagno runs a successful business of supplying LED screens to TV shows and events – but in her free time, she enjoys ballroom dancing. In 2019, Kagno and her dancing partner Yuri Simachev earned the title of the world vice-champions in Pro-Am – a discipline of ballroom dancing in which a couple consists of a professional dancer and an amateur. (Photo by Alexander Zemlianichenko/AP Photo) 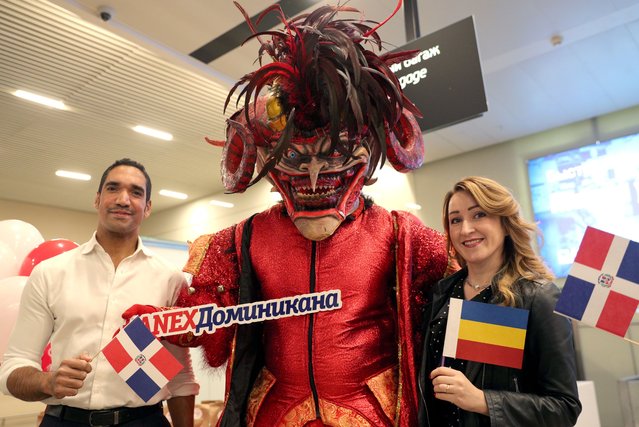 Anex Tour travel agency workers and a costumed character pose for a photograph as travellers check in for a flight to Punta Cana, Dominican Republic, at the Platov International Airport in Rostov-On-Don Region, Russia on October 10, 2021. Azur Air has begun operating flights between Russia and the Dominican Republic once in 11 days. Russia suspended most direct international flights in March 2020 in connection with the COVID-19 pandemic. In early August 2021, Russia completely removed the ban on direct flights to the Dominican Republic. (Photo by Erik Romanenko/TASS) 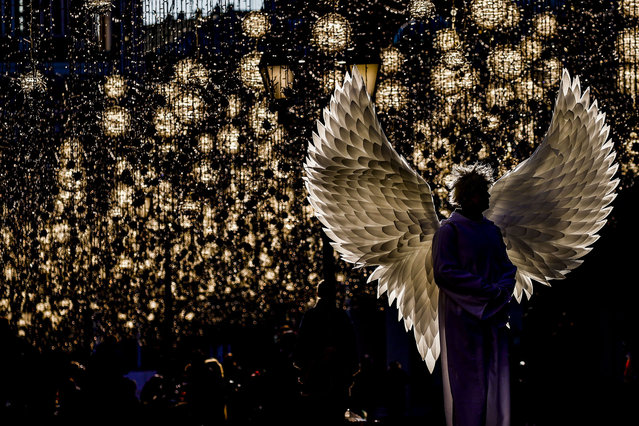 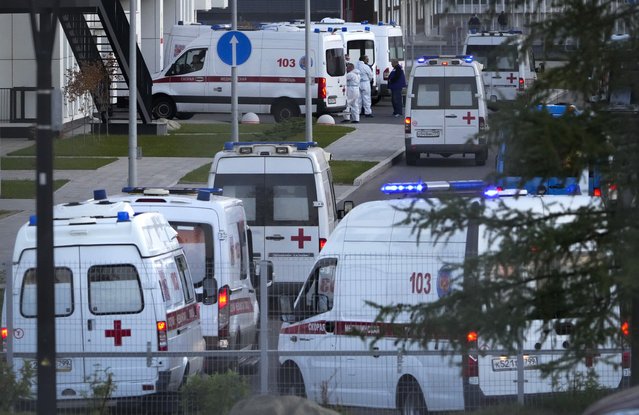 Ambulances with patients suspected of having coronavirus stand near a hospital in Kommunarka, outside Moscow, Russia, Monday, October 11, 2021. Russia's daily coronavirus infections and deaths are hovering near all-time highs amid a laggard vaccination rate and the Kremlin's reluctance to toughen restrictions. Russia's state coronavirus task force reported 29,409 new confirmed cases Monday. That's the highest number since the start of the year and just slightly lower than the pandemic record reached in December. (Photo by Alexander Zemlianichenko/AP Photo) 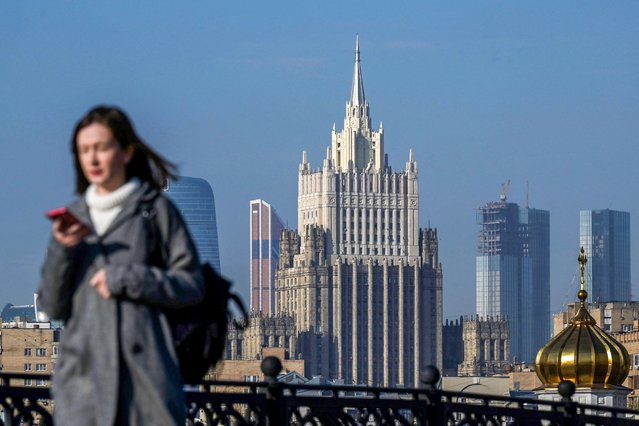 A woman looks at her phone as she walks across a bridge with the Russian Foreign Ministry building in the background, in central Moscow, on October 12, 2021. (Photo by Natalia Kolesnikova/AFP Photo) 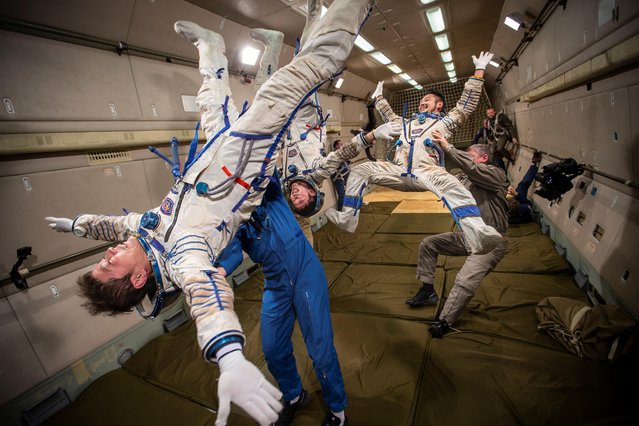 Space flight participants Yusaku Maezawa and Yozo Hirano and back-up participant Shun Ogiso perform a zero-gravity flight while training ahead of the expedition to the International Space Station in the Moscow region, Russia on October 12, 2021. Japanese entrepreneur Yusaku Maezawa and his production assistant Yozo Hirano, led by Roscosmos cosmonaut Alexander Misurkin, will take part in a mission to the International Space Station scheduled for December. (Photo by Space Adventures via Reuters) 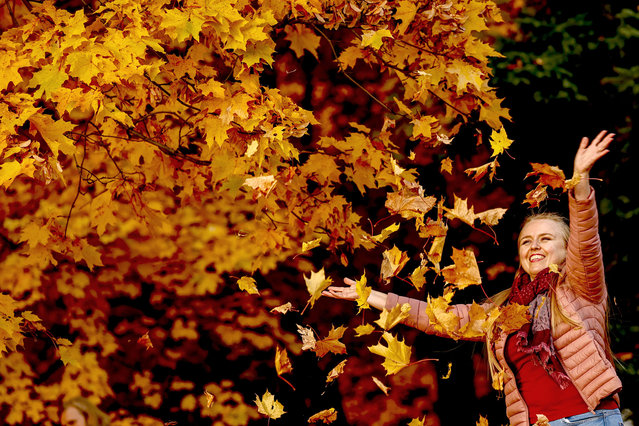 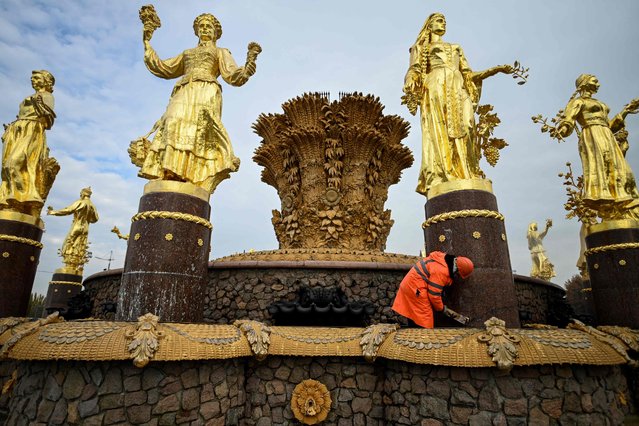 A municipal worker cleans the Druzhba Narodov (Friendship of Nations) fountain at the All-Russia Exhibition Centre (VDNKh) as part of the city's preparations for winter in Moscow on October 13, 2021. The fountain was installed at the All-Russia Exhibition Centre (VDNKh), a trade show and amusement park, in 1954, with 16 gilded bronze sculptures of young women representing 16 republics of the USSR around the oval fountain bowl featuring a wheat sheaf. (Photo by Kirill Kudryavtsev/AFP Photo) 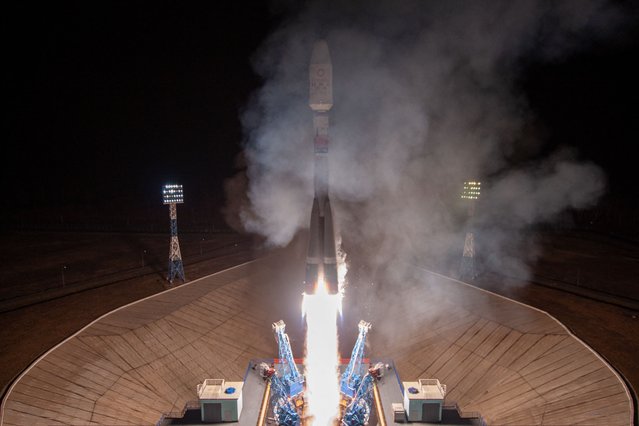 This handout picture taken and released by the Russian space agency Roscosmos on October 14, 2021 shows a Soyuz-2.1b rocket booster with 36 UK OneWeb satellites blasting off from the Vostochny cosmodrome outside the city of Uglegorsk, about 200 kilometres from the city of Blagoveshchensk, in the far eastern region of Amur. (Photo by Handout/Russian Space Agency Roscosmos/AFP Photo) 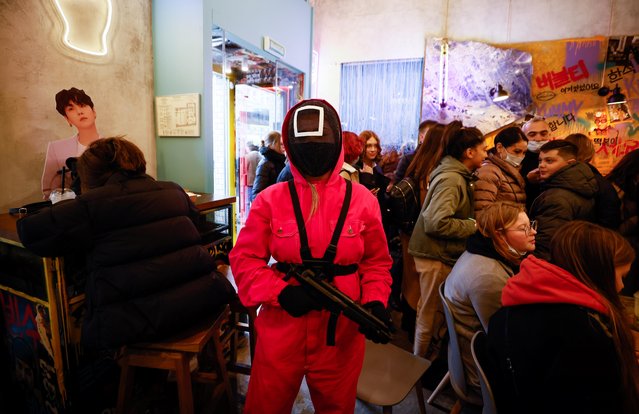 A waiter of Korean cafe Chick O'Rico poses for a picture in a costume of a personage from television series Squid Game in Moscow, Russia on October 15, 2021. (Photo by Maxim Shemetov/Reuters) 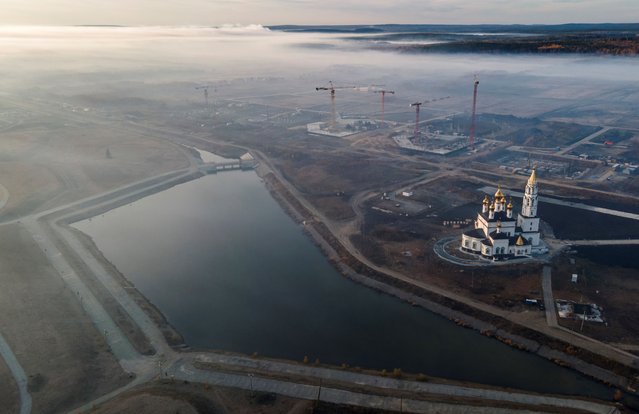 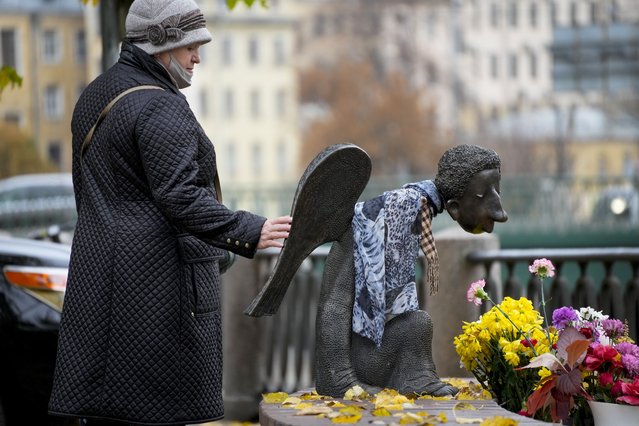 A woman touches the sculpture “Sad Angel”, a memorial for St. Petersburg's medical workers who died from coronavirus during their work in St. Petersburg, Russia, Friday, October 15, 2021. Russia's daily tolls of coronavirus infections and deaths have surged to another record in a quickly mounting figure that has put a severe strain on the country's health care system. The record for daily COVID-19 deaths in Russia has been broken repeatedly over the past few weeks as fatalities steadily approach 1,000 in a single day. (Photo by Dmitri Lovetsky/AP Photo) 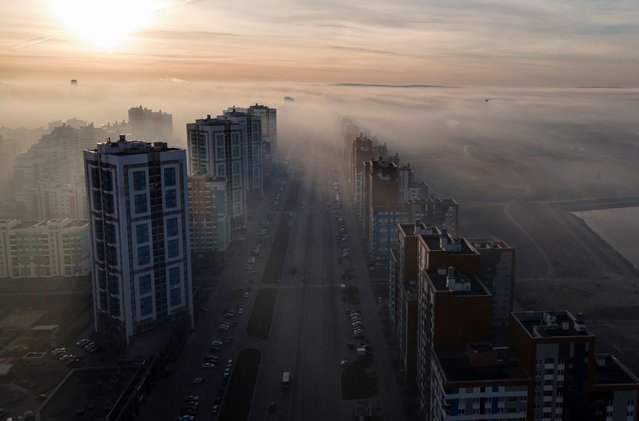 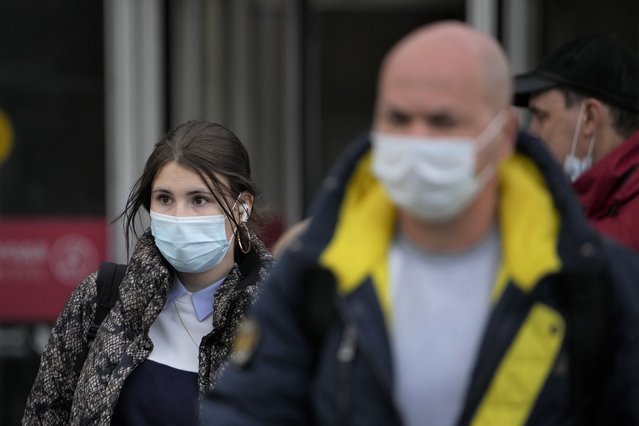 People wearing face masks to help curb the spread of the coronavirus leave a subway in Moscow, Russia, Friday, October 15, 2021. Russia's daily tolls of coronavirus infections and deaths have surged to another record in a quickly mounting figure that has put a severe strain on the country's health care system. The record for daily COVID-19 deaths in Russia has been broken repeatedly over the past few weeks as fatalities steadily approach 1,000 in a single day. (Photo by Alexander Zemlianichenko/AP Photo) 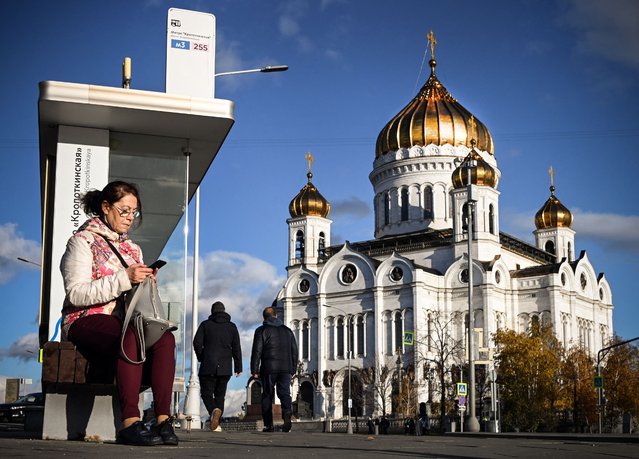 A woman sits at a bus stop in front of Christ the Saviour cathedral, the main Russian Orthodox church in central Moscow, on October 18, 2021, amid the outbreak of Covid-19, caused by the novel coronavirus. Russia on Sunday reported a new record for coronavirus infections for a fourth day in a row, a day after the worst-affected country in Europe set a new death toll high. There were 34,303 new infections and 997 deaths registered in the country over 24 hours, according to the official toll. (Photo by Alexander Nemenov/AFP Photo) 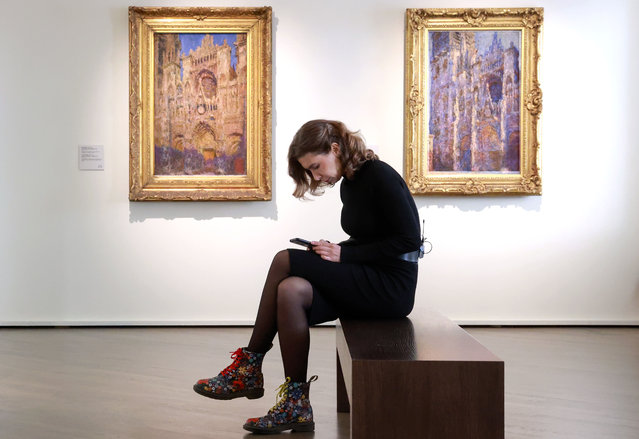 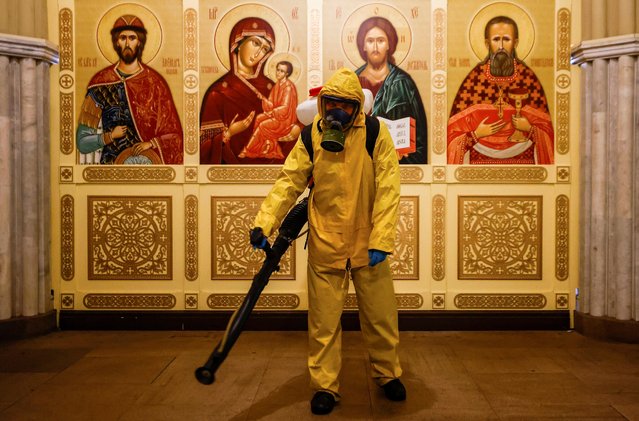 A specialist wearing personal protective equipment (PPE) sprays disinfectant while sanitizing a chapel inside the building of the Leningradsky railway station amid the outbreak of the coronavirus disease (COVID-19) in Moscow, Russia on October 19, 2021. (Photo by Maxim Shemetov/Reuters) 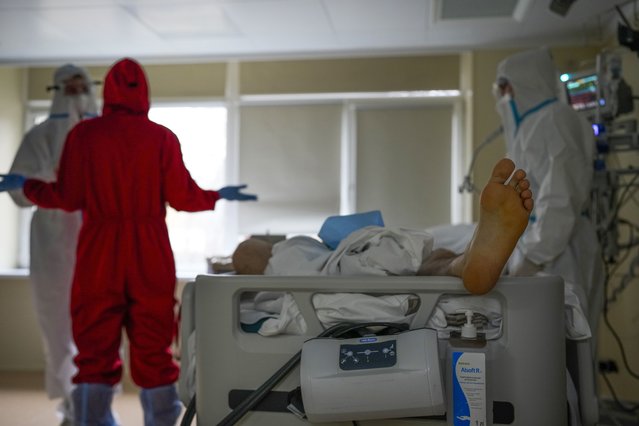 Medics wearing special suits to protect against coronavirus make a briefing as they come to treat a patient with coronavirus at an ICU at the Moscow City Clinical Hospital 52, in Moscow, Russia, Tuesday, October 19, 2021. Russia hit another daily record of coronavirus deaths Tuesday as rapidly surging infection rates raised pressure on the country's health care system and prompted the government to suggest declaring a nonworking week. (Photo by Alexander Zemlianichenko/AP Photo) 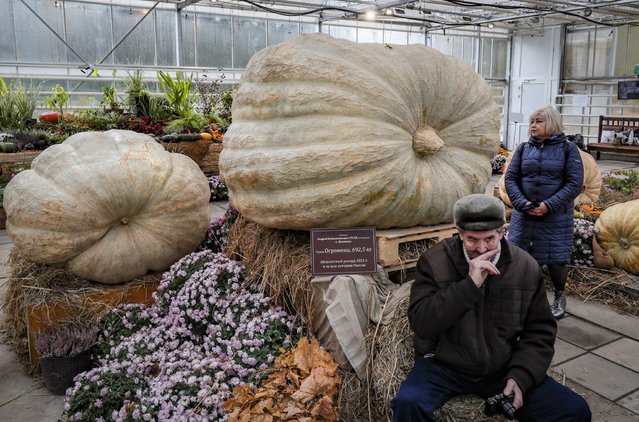 A man poses near the giant pumpkin weighing 692,5 kilograms during exhibition “The largest pumpkins grown in Russia in 2021” at the Botanical Garden of Moscow State University in Moscow, Russia 15 October 2021. The exhibition will last until 07 November. At the end of the exhibition pumpkins will be cut and distributed to visitors. (Photo by Yuri Kochetkov/EPA/EFE)
Edit Del
23 Oct 2021 08:43:00, post received 0 comments
Publication archive:
←   →
Popular tags:
All tags
Last searches: