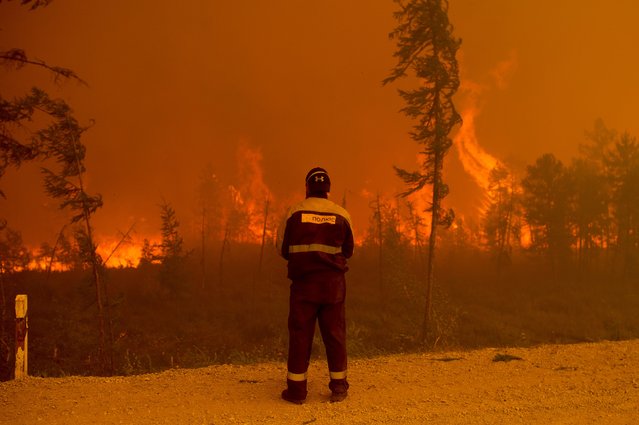 A firefighter stands at the scene of forest fire near Kyuyorelyakh village at Gorny Ulus area west of Yakutsk, in Russia, Saturday, August 7, 2021. Wildfires in Russia's vast Siberia region endangered a dozen villages Saturday and prompted authorities to evacuate some residents. (Photo by Ivan Nikiforov/AP Photo) 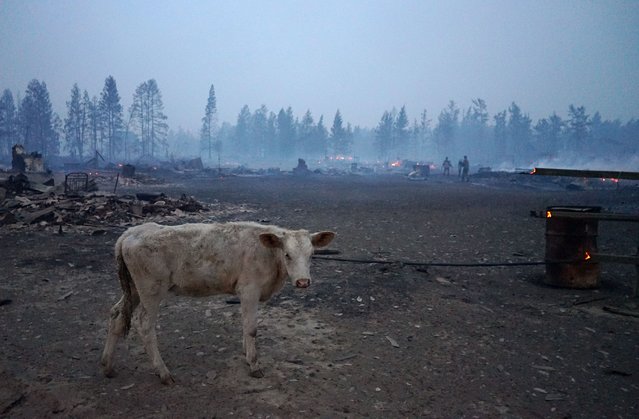 A calf wanders the village of Byas-Kyuyol hit by wildfire in Yakutia, Russia on August 7, 2021. On August 7, a crown fire got past the firebreak and spread to outbuildings due to strong winds. Residents were evacuated to three temporary accommodation facilities in Berdigestyakh. Firefighters managed to save 225 houses, 31 damaged beyond repair. (Photo by Semyon Ryabinin/TASS) 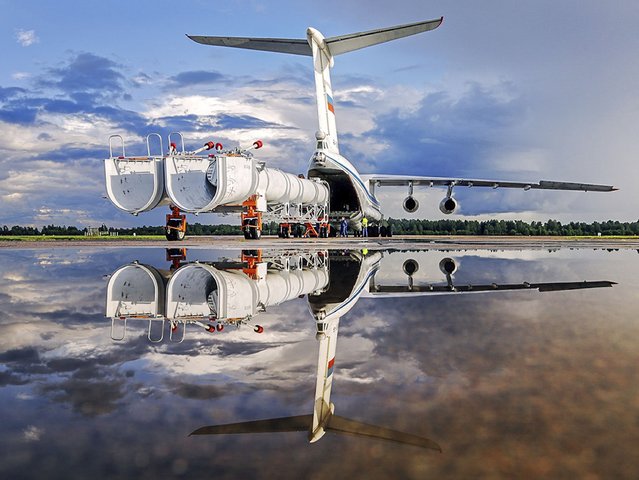 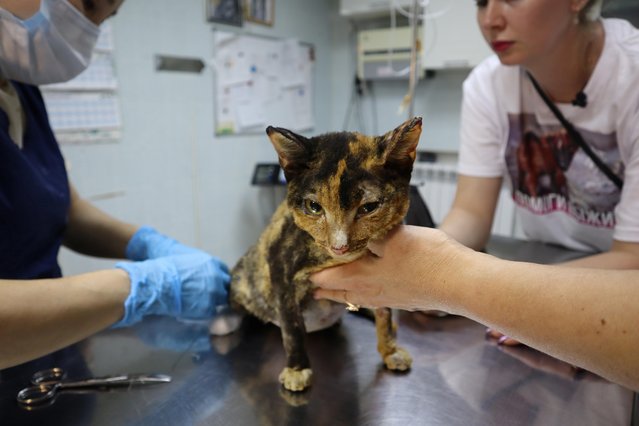 A cat injured during a wildfire in the village of Byas-Kyuyol and then rescued by local volunteers receives treatment at a veterinary clinic in Yakutsk, Russia on August 10, 2021. (Photo by Roman Kutukov/Reuters) 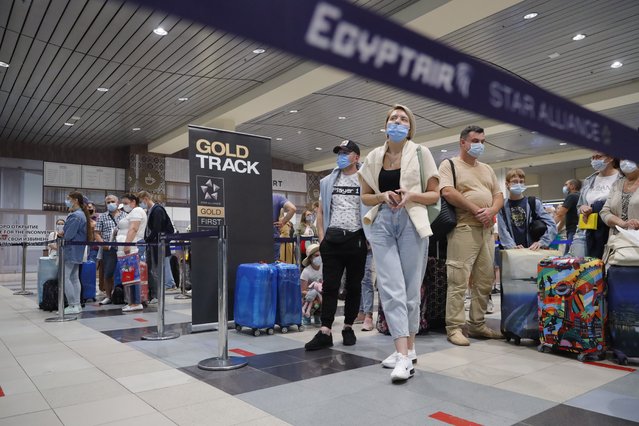 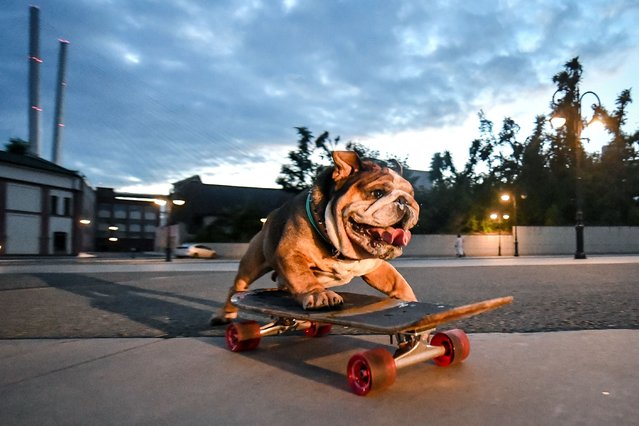 Bullet the bulldog skateboards in a seafront area in the city of Vladivostok, on Russia's Pacific coast on August 9, 2021. The 6-year-old dog learnt how to skateboard two years ago thanks to his owner, Sergei Shukshuyev. (Photo by Yuri Smityuk/TASS) 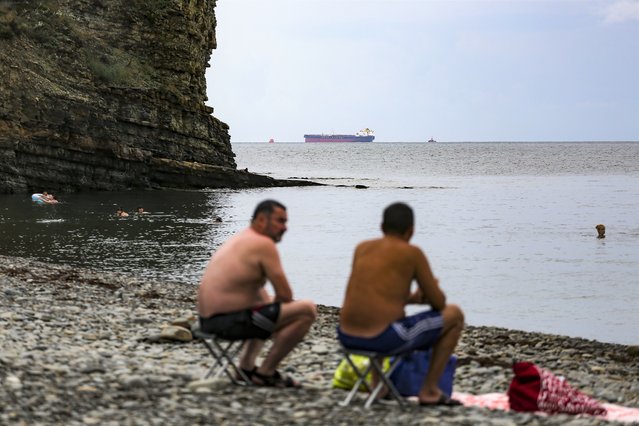 Two men rest on the beach as the Minerva Symphony tanker, which sails under the Greek flag is seen at the Black Sea coast after an oil spill, near Novorossiysk, Russia, Thursday, August 12, 2021. Russia'n prosecutors have opened a criminal probe into an oil spill off the country's Black Sea coast that appeared to be far bigger than initially expected. The oil spilled while being pumped into the Minerva Symphony tanker. Authorities initially estimated the spill to cover only 200 square meters (2,153 square feet). But Russian scientists said Wednesday after studying satellite images that it actually covered nearly 80 square kilometers (nearly 31 square miles). (Photo by AP Photo/Stringer) 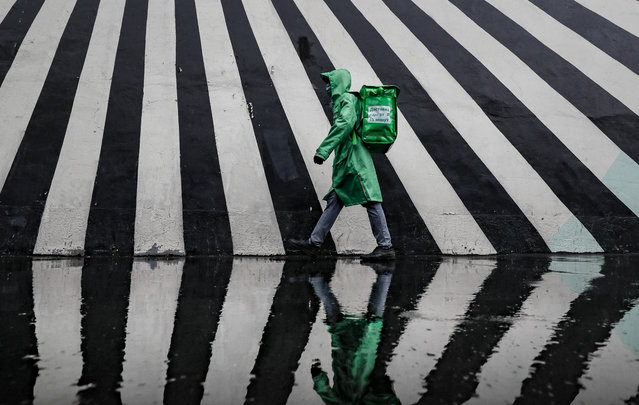 Delivery food man walks on a street during rainfall in front of the graffiti on the wall in Moscow, Russia, 11 August 2021. (Photo by Yuri Kochetkov/EPA/EFE) 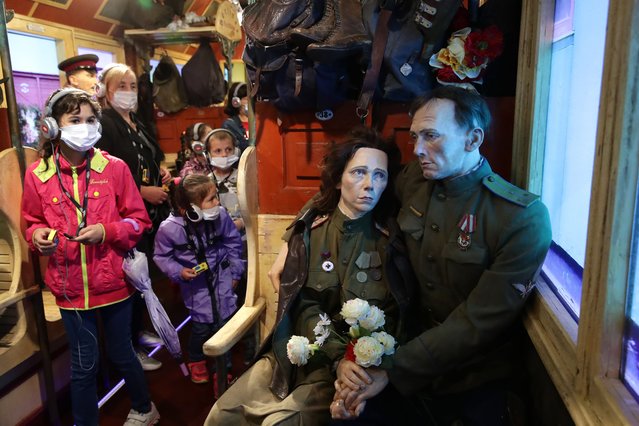 People view items on display at a mobile exhibition titled “Victory Train: Scientific Research during the Great Patriotic War” on the world of academia during WWII, on board a train at the Novosibirsk-Glavny railway station in Novosibirsk, Russia on August 12, 2021. This is the 74th stop of the train on route. (Photo by Kirill Kukhmar/TASS) 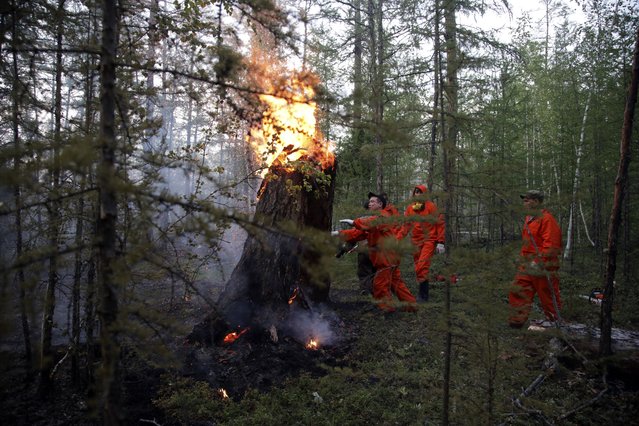 Firefighters and volunteers work at the scene of forest fire near Magan village in Yakutsk region, republic of Sakha also known as Yakutia, Russia Far East, on Tuesday, August 10, 2021. Russian authorities have expanded a state of emergency in northeast Siberia to bring in outside resources to combat wildfires that have engulfed the vast region. Smoke from burning forests forced the airport in the capital of Yakutsk to suspend operations Thursday. (Photo by Vasily Kuper/AP Photo) 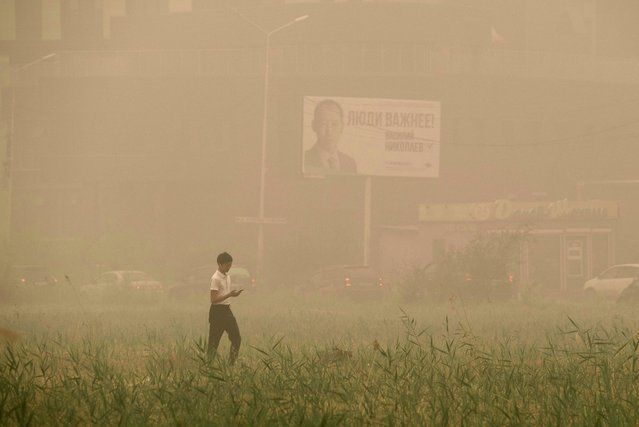 A boy walks through smoke from a forest fire covers Yakutsk, the capital of the republic of Sakha also known as Yakutia, Russia Far East, Russia, Thursday, August 12, 2021. Smoke covered hundreds of villages in Siberia as wildfires raged for another day in Russia's vast, forest-rich region. Emergency officials in southeastern Siberia's Irkutsk oblast said that smoke from the wildfires in the north and in the neighboring Sakha Republic, covered 736 villages and nine cities in the region. (Photo by Ivan Nikiforov/AP Photo) 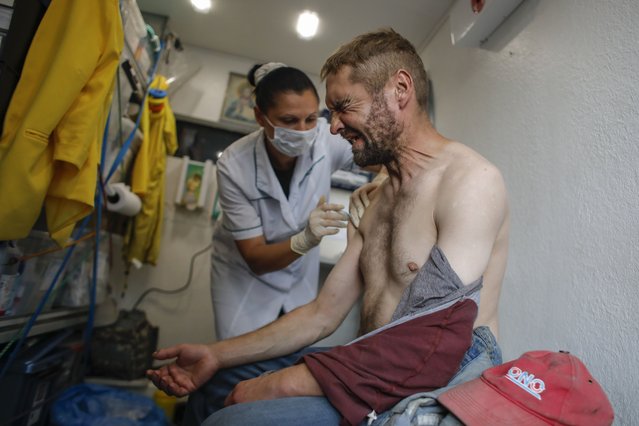 A homeless man reacts as he gets a shot of the one-dose Sputnik Light vaccine at a mobile vaccination station in St. Petersburg, Russia, Wednesday, August 11, 2021. Russia has faced a surge in new infections blamed on the growing prevalence of the more contagious delta variant and low vaccine uptake. (Photo by Elena Ignatyeva/AP Photo) 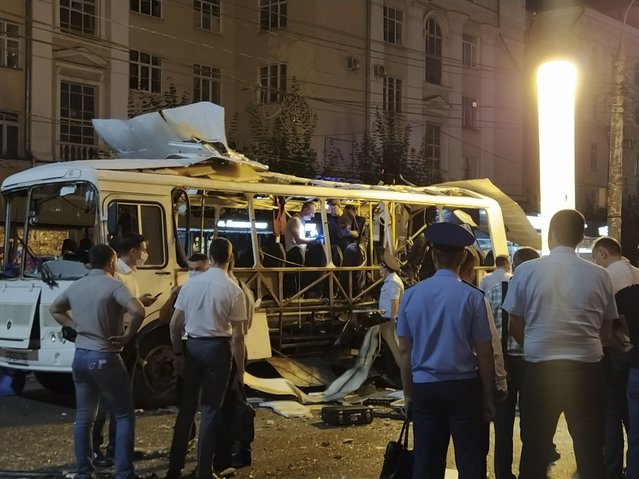 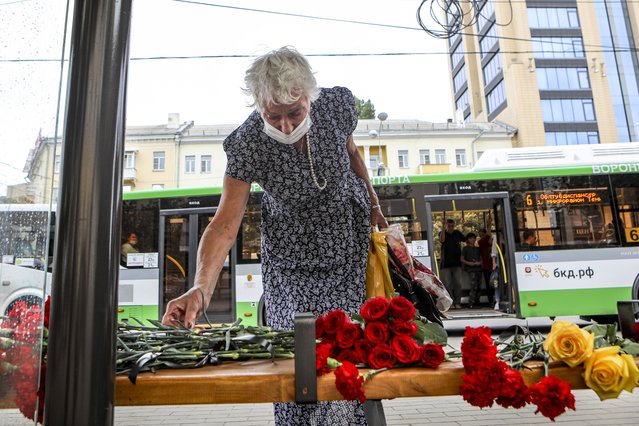 A woman lays flowers at a bus stop in memory of people died from injuries they sustained in the explosion near a side of an explosion on a city bus in Voronezh, about 450 kilometers (280 miles) south of Moscow, Russia, on Friday, August 13, 2021. (Photo by Kristina Brazhnikova/AP Photo) 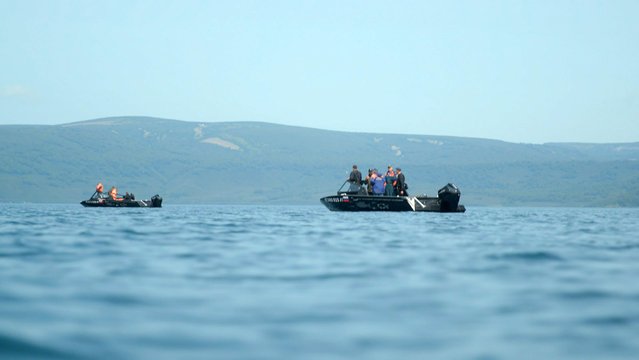 In this handout photo taken from video released by Kamchatka regional government, emergency personnel work near the site where a helicopter carrying tourists crashed at Kurile Lake in the Kronotsky nature reserve on the Kamchatka Peninsula in Russia, Thursday, August 12, 2021. A helicopter carrying tourists has crashed into a deep volcanic crater lake on the Kamchatka Peninsula in Russia's far east, leaving up to eight people missing. Officials said at least eight survived. Emergency workers including divers were searching for survivors in Kurile Lake in the Kronotsky nature reserve. (Photo by Kamchatka regional government via AP Photo) 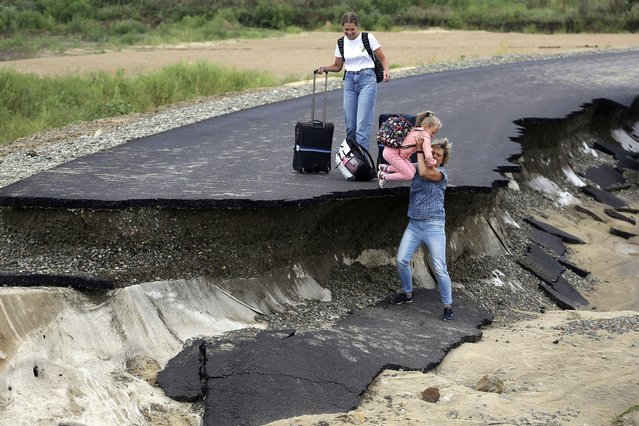 Tourists walk try to walk along a road damaged by flooding near the village of Tsybanobalka, Krasnodar region, Russia, Saturday, August 14, 2021. Heavy rains have flooded broad areas in southern Russia, forcing the evacuation of more than 1,,500 people. Authorities in the Krasnodar region said Saturday that more than 1,400 houses have been flooded following storms and heavy rains that swept the area this week. (Photo by AP Photo/Stringer) 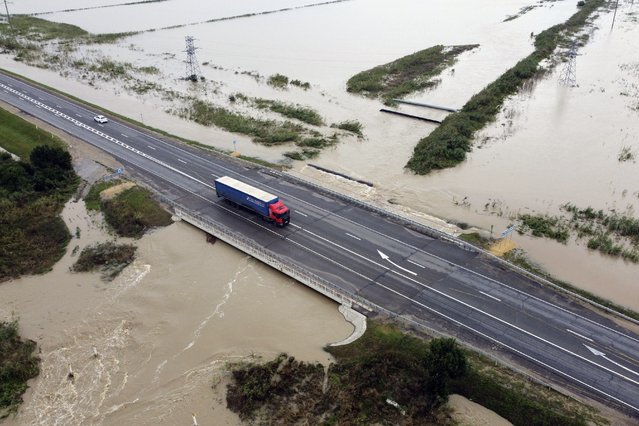 A truck drives through a road after flooding in the Krasnodar region, Russia, Saturday, August 14, 2021. (Photo by AP Photo/Stringer) 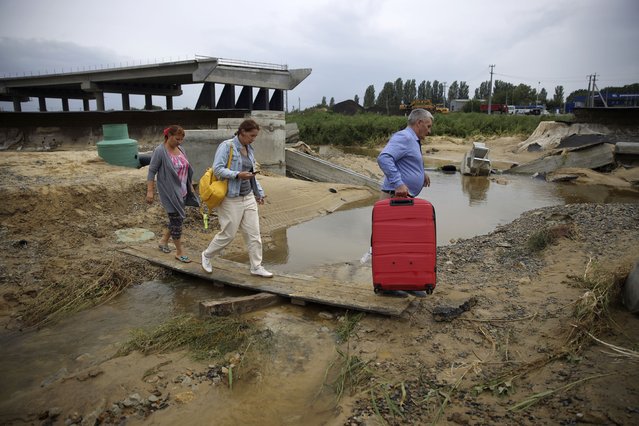 Tourists walk to an airport along a road damaged by floods near the village of Tsybanobalka, Krasnodar region, Russia, Saturday, August 14, 2021. (Photo by AP Photo/Stringer) 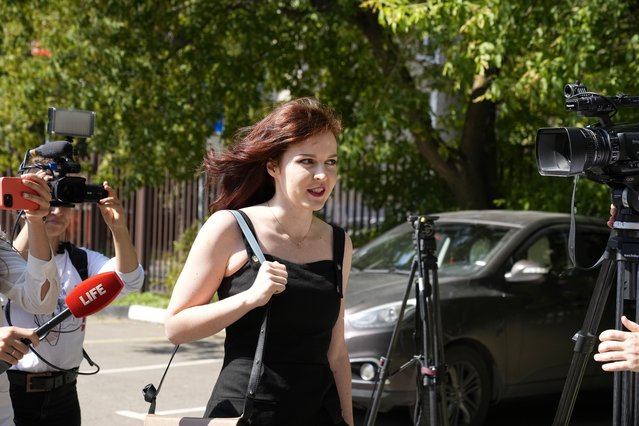 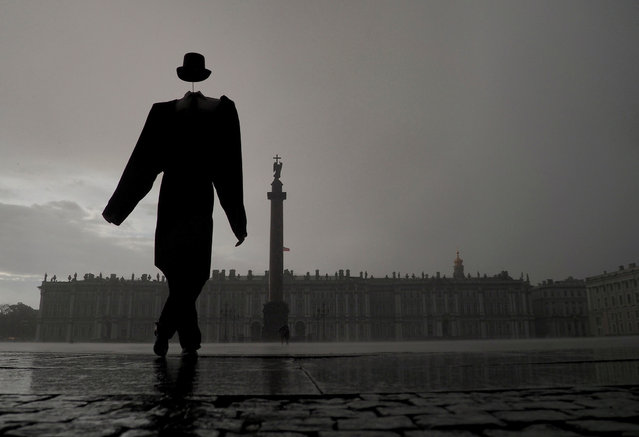