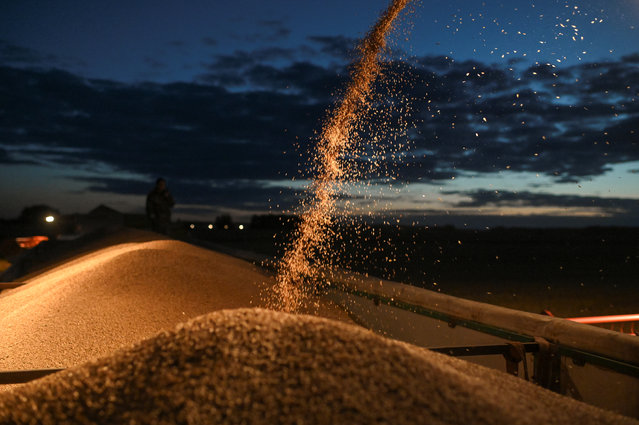 A combine loads a truck with wheat during harvesting in a field of Triticum farm in Omsk region, Russia on September 16, 2020. (Photo by Alexey Malgavko/Reuters) 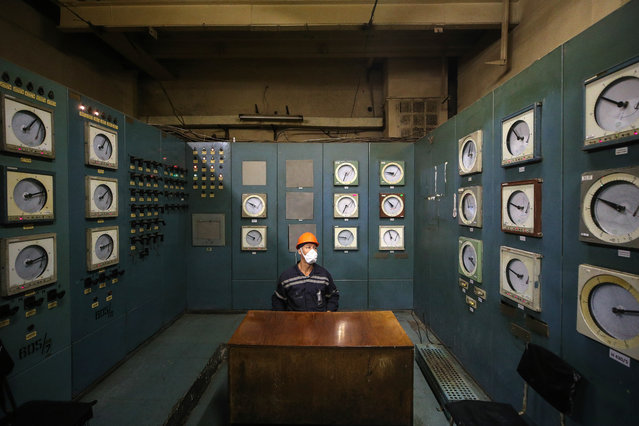 An employee works in a control centre of a chemical shop at a hydrometallurgical facility, part of Priargunsky Industrial Mining and Chemical Union (PIMCU) in Krasnokamensk, Transbaikal Territory, Russia on September 16, 2020. In terms of sales of 2B/3B grade brown coal, the Urtuisky open pit mine is one of the leading brown coal deposits in the Russian market. PIMCU is the largest uranium mining company in Russia and is a subsidiary of ARMZ Uranium Holding Co (Atomredmetzoloto), which is part of the Rosatom State Corporation. (Photo by Sergei Bobylev/TASS) 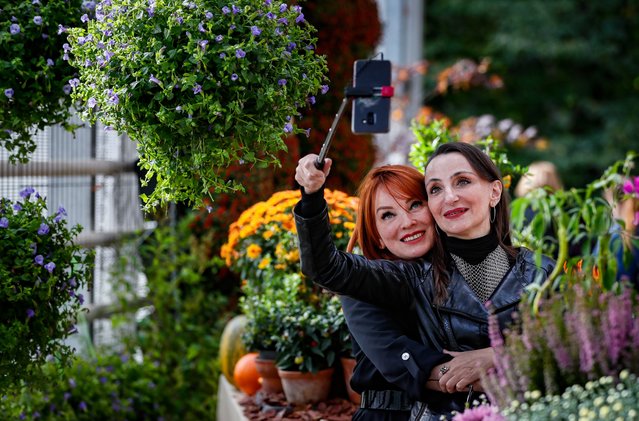 Women take a selfie during the annual festival Colors of Autumn in the Botanical Garden of Moscow State University in Moscow, Russia 14 September 2020. More than 50 new and rare varieties of chrysanthemums and the largest pumpkins in Russia are presented at the festival. The exposition will be constantly changing and updated until the end of the festival. (Photo by Yuri Kochetkov/EPA/EFE) 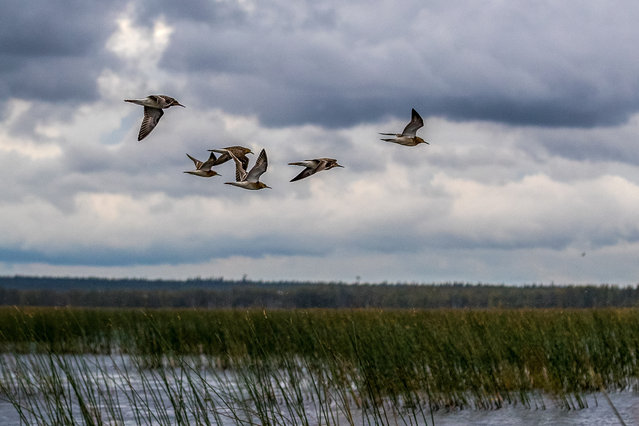 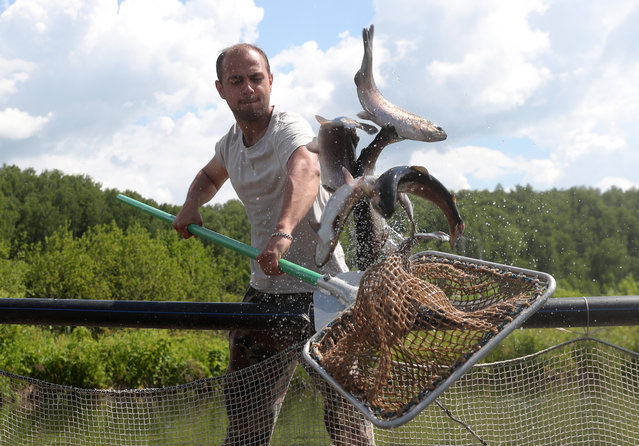 Entrepreneur Ruslan Namazov at his trout farm in Leninogorsk District of Tatarstan, Russia on September 17, 2020. Namazov and his father, who share the business, purchased equipment for their farm with a grant from Russia's national project “Small and Medium-Sized Businesses and Support of the Individual Entrepreneur Initiative”. (Photo by Yegor Aleyev/TASS) 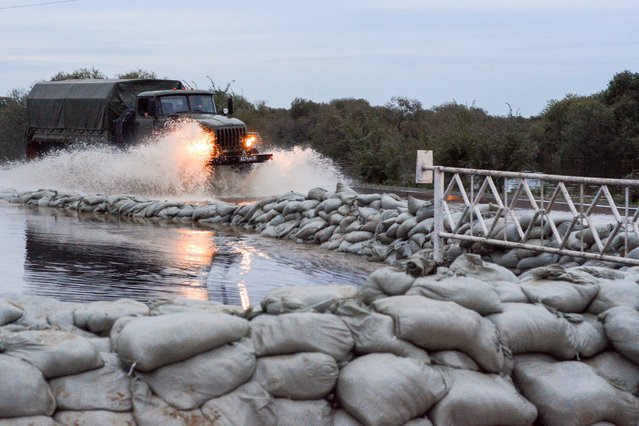 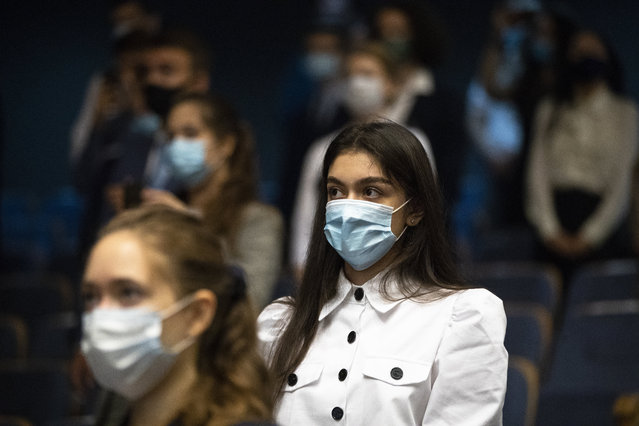 Students of the MGIMO (Moscow State Institute for Foreign Relations) wearing face masks to protect against coronavirus attend a meeting with Russian Foreign Minister Sergey Lavrov in Moscow, Russia, Tuesday, September 1, 2020. Russia's tally of confirmed coronavirus cases has surpassed 1 million after authorities reported 4,729 new cases. With a total of 1,000,048 reported cases up to Tuesday, Russia has the fourth largest caseload in the world after the U.S., Brazil and India. (Photo by Pavel Golovkin/AP Photo) 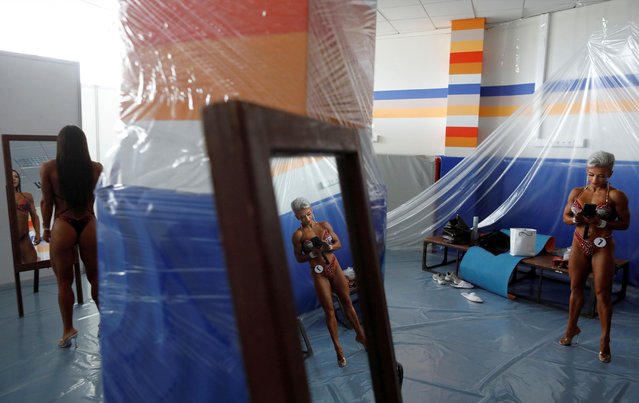 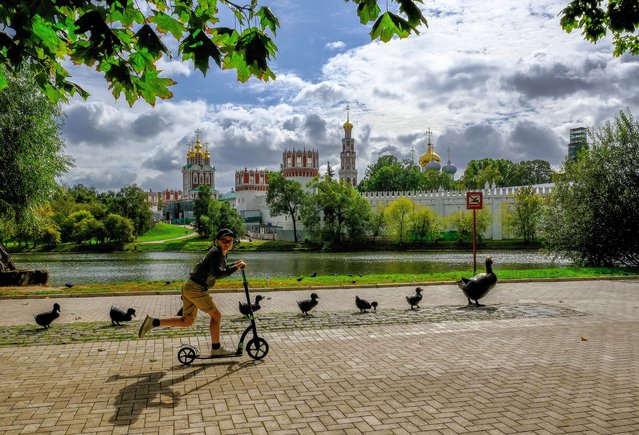 A boy rides a scooter near the Novodevichy Convent in central Moscow on September 14, 2020. (Photo by Yuri Kadobnov/AFP Photo) 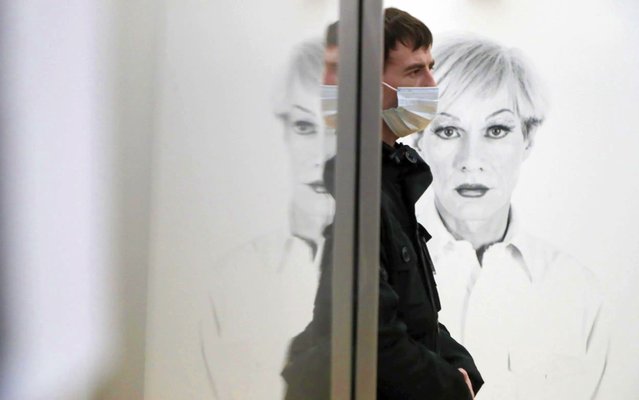 A worker wearing face mask stands in front of pictures of Andy Warhol by US photographer Christopher Makos, during installation of the exhibition “Me, Andy Warhol”, at New Tretyakov Gallery in Moscow, Russia on September 21, 2020. The exhibit, which features 200 artworks, will run from 25 September to 10 January 2021. (Photo by Sergei Ilnitsky/EPA/EFE/Rex Features/Shutterstock) 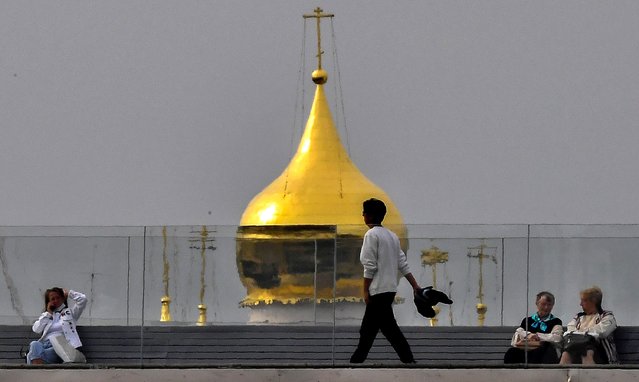 A man walks on a bridge at the Zaryadye park in front of the Kremlin's cathedral in central Moscow on September 18, 2020. (Photo by Yuri Kadobnov/AFP Photo) 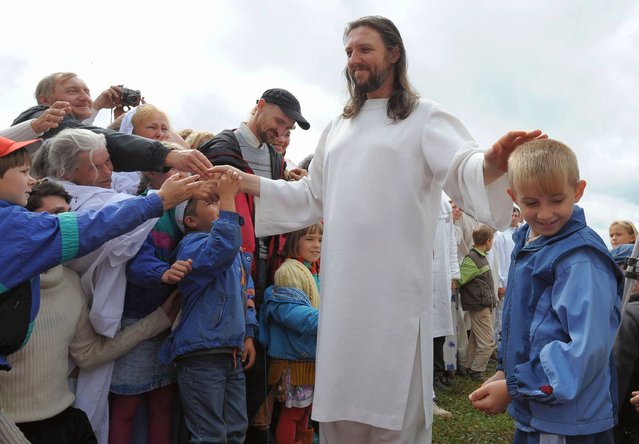 In this file photo taken on August 28, 2009 shows “Vissarion the Teacher”, or “Jesus of Siberia”, Russian ex-traffic cop Sergei Torop meets with his followers in the remote village of Petropavlovka, Russia. Torop who claims to be the reincarnation of Jesus and his top aides was arrested on September 22, 2020 in an operation involving armed troops and aircraft. (Photo by Alexander Nemenov/AFP Photo) 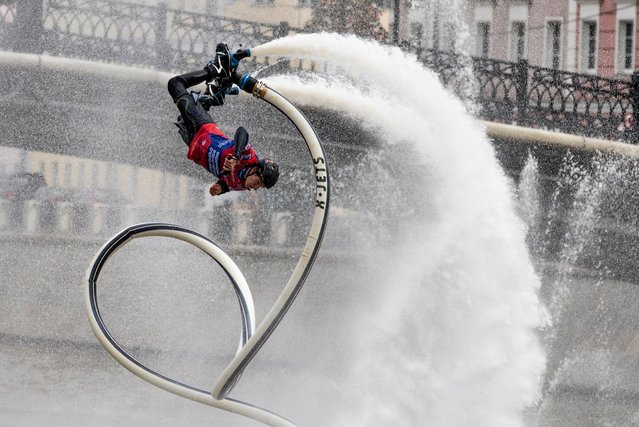 Andrei Smirnov performs on a hydro pipe on the Moscow River Channel during a SUP (Stand Up Paddle)-Surfing festival in Moscow, Russia, Saturday, September 19, 2020. (Photo by Alexander Zemlianichenko/AP Photo) 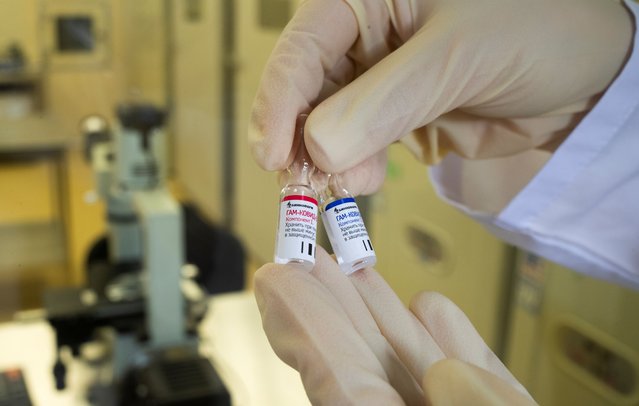 An employee demonstrates vials with “Gam-COVID-Vac” vaccine against the coronavirus disease (COVID-19), which is developed at Binnopharm pharmaceutical plant, part of Alium Group owned by Sistema financial corporation, in Zelenograd near Moscow, Russia on September 18, 2020. (Photo by Maxim Shemetov/Reuters) 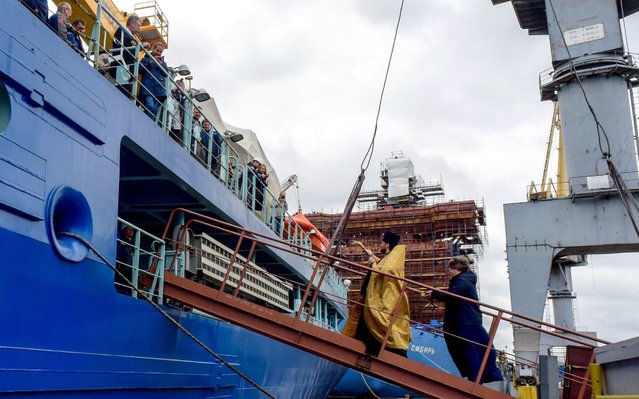 Russian Orthodox priest blesses the Russia's nuclear-powered icebreaker Arktika at the port in Saint Petersburg on September 22, 2020. Russia's nuclear-powered icebreaker Arktika, touted as the most powerful of its kind and a symbol of Moscow's Arctic ambitions, set off on its maiden voyage on September 22, 2020. Designed to transport liquefied natural gas from the Arctic, the giant vessel is 173 metres (570 feet) long and 15 metres high. (Photo by Olga Maltseva/AFP Photo) 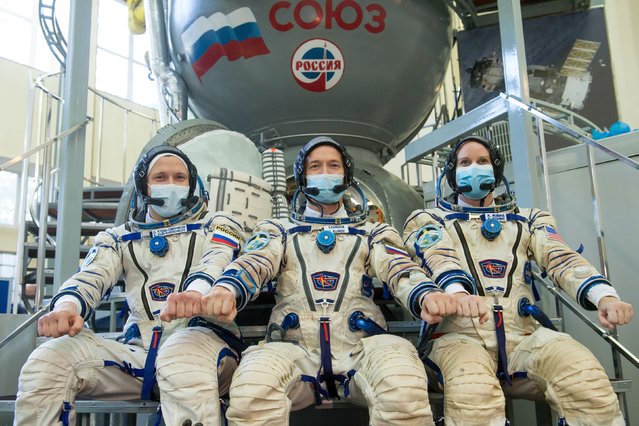 Cosmonauts of the Russian space agency Roscosmos Sergei Ryzhikov, Sergei Kud-Sverchkov and NASA astronaut Kathleen Rubins pose for a picture while undergoing tests ahead of their expedition to the International Space Station (ISS) at a training centre in Star City, Russia on September 23, 2020. (Photo by Andrey Shelepin/GCTC/Russian space agency Roscosmos/Handout via Reuters) 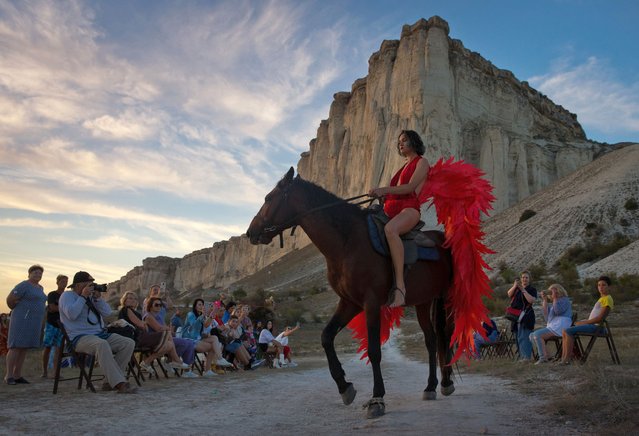 A model wearing a creation rides a horse during an outdoor fashion show for collections by Crimean designers near Ak-Kaya Rock in Belgorsk District of Crimea, Russia, during the 2020 Crimean Fashion Week on September 13, 2020. (Photo by Sergei Malgavko/TASS) 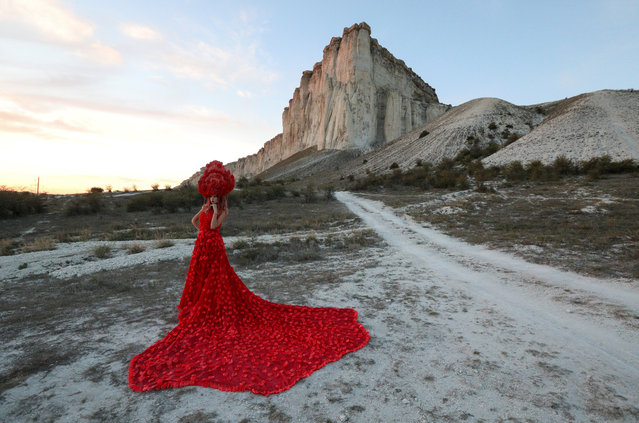 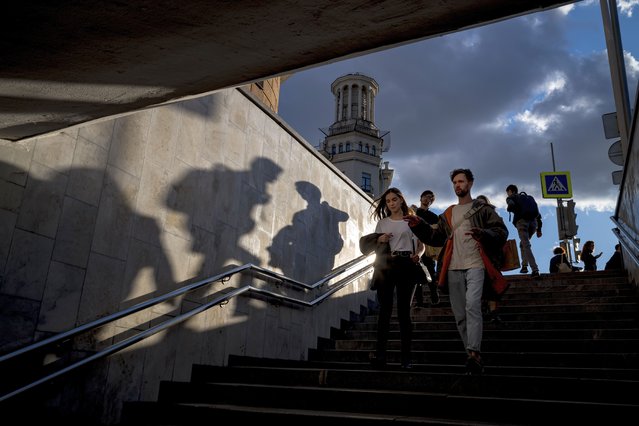 People walk down to the underpass under the street during sunset in Moscow, Russia, Tuesday, September 15, 2020. (Photo by Alexander Zemlianichenko/AP Photo) 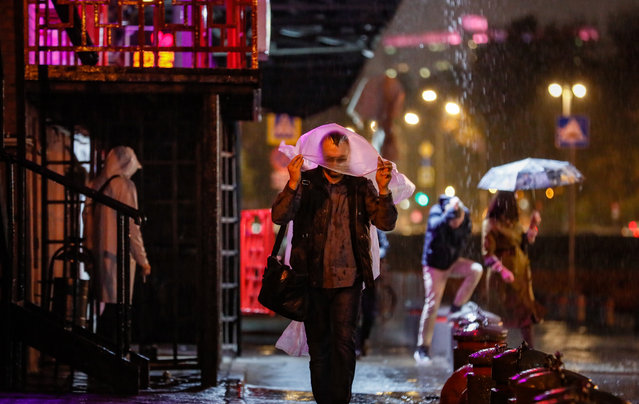