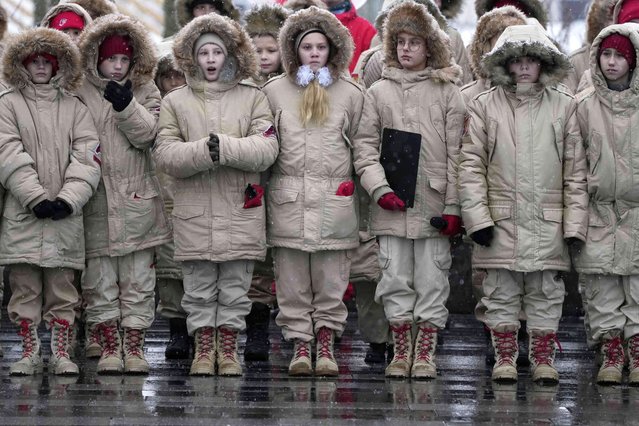 Members of the Russian Young Army Cadets National Movement stay in formation as they mark the 80th anniversary of the Battle of Moscow, in the Patriot Park outside Moscow, Russia, Sunday, December 5, 2021. The Battle of Moscow is the counterattack of Soviet troops against German invaders during World War II that didn't allow Hitler to capture the city in 1941. (Photo by Pavel Golovkin/AP Photo) 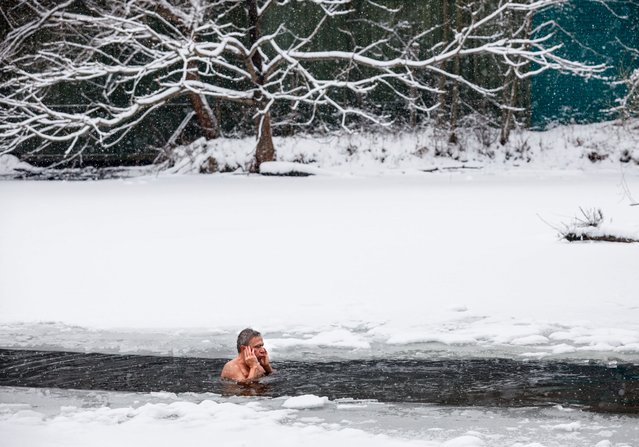 A man swims in the ice cold water of the Bottomless Lake in Serebryany Bor, in Moscow, Russia, Sunday, December 5, 2021. Moscow temperatures on Sunday dropped to –5 C ( 23 F). (Photo by Alexander Zemlianichenko/AP Photo) 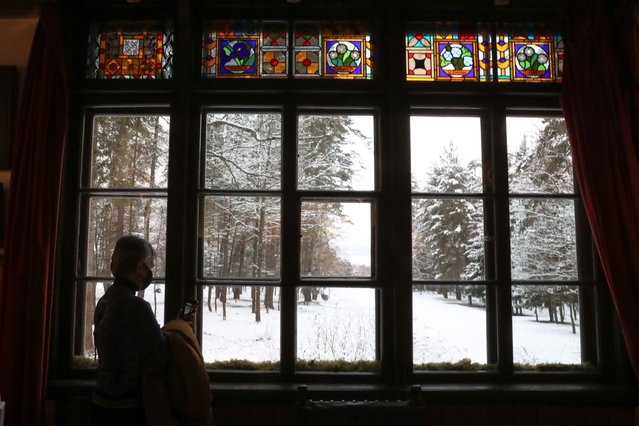 A visitor in the Vasily Polenov Museum in the village of Bekhovo in Tula Region, Russia on December 5, 2021. The village of Bekhovo has been named one of the Best Tourism Villages by the UNWTO initiative; 170 villages from 75 countries took part in the contest. Bekhovo is located on the bank of the Oka River and is part of the Vasily Polenov National Park. (Photo by Sergei Karpukhin/TASS) 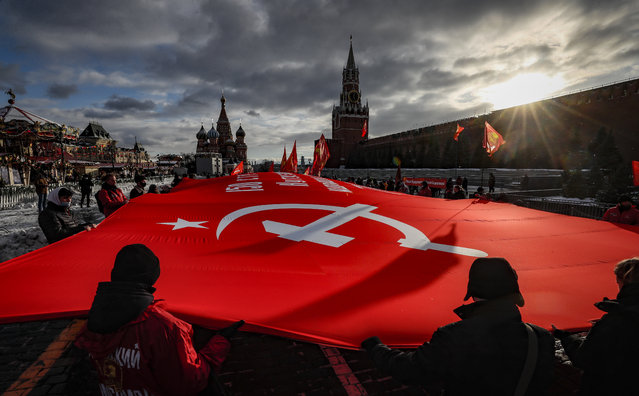 Communist party members and supporters hold a huge replica of the Victory banner at the Red Square in Moscow, Russia, 04 December 2021. Russian communists gather to mark the 80th anniversary of the decisive Soviet counteroffensive near Moscow during World War II. (Photo by Yuri Kochetkov/EPA/EFE) 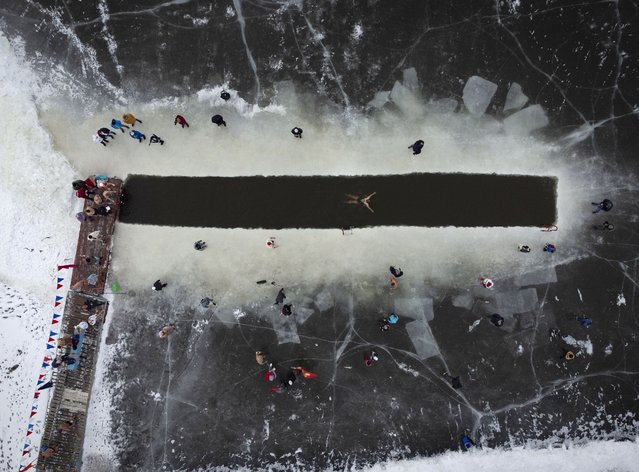 A woman swims in the icy waters of the Irtysh River on the opening day of the winter swimming season in Omsk, Russia on December 5, 2021. Picture taken with a drone. (Photo by Alexey Malgavko/Reuters) 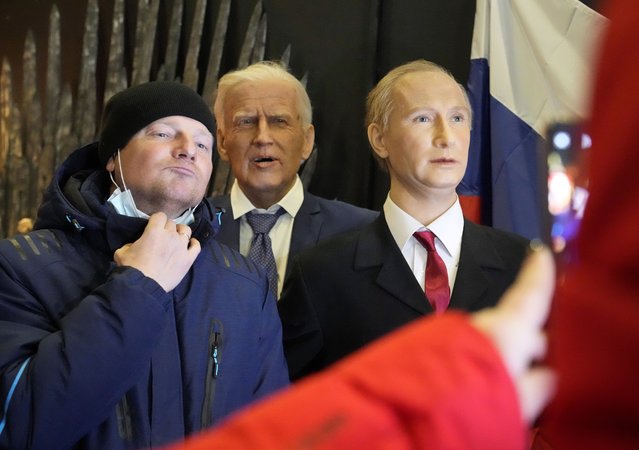 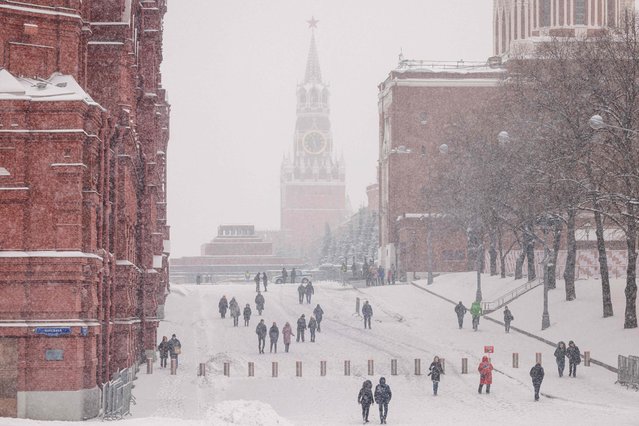 People walk outside the Kremlin during heavy snowfall in Moscow on December 7, 2021. (Photo by Dimitar Dilkoff/AFP Photo) 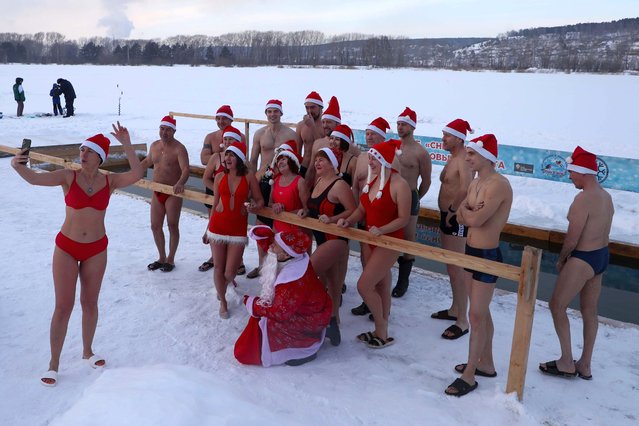 Members of the Snegiri (Bullfinches) winter swimming club pose for a group photo before having a swim in Lake Krasnoye in Kemerovo, Russia on December 12, 2021. (Photo by Maxim Kiselev/TASS) 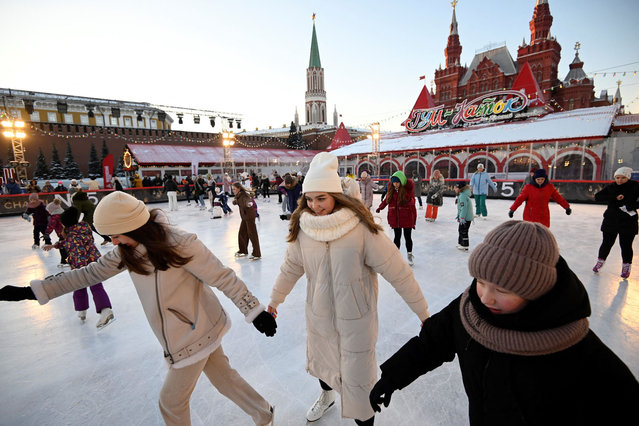 Women and girls take part in a figure skating master class at an outdoor ice skating rink in Red Square in downtown Moscow on December 10, 2021. (Photo by Natalia Kolesnikova/AFP Photo) 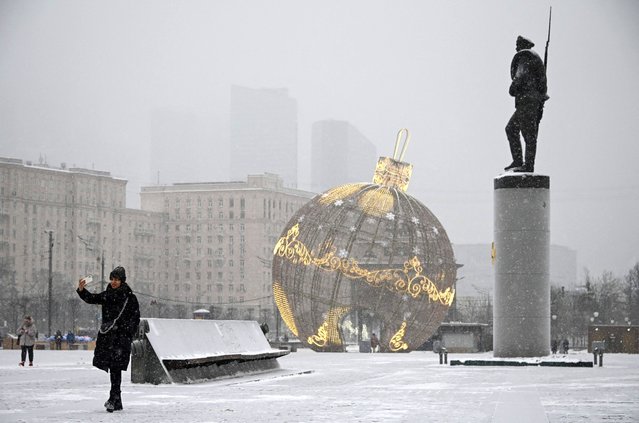 A woman makes a selfie photo next to Christmas decorations and a Monument to the Heroes of the WWI at the Poklonnaya Hill in western Moscow on December 13, 2021. (Photo by Alexander Nemenov/AFP Photo) 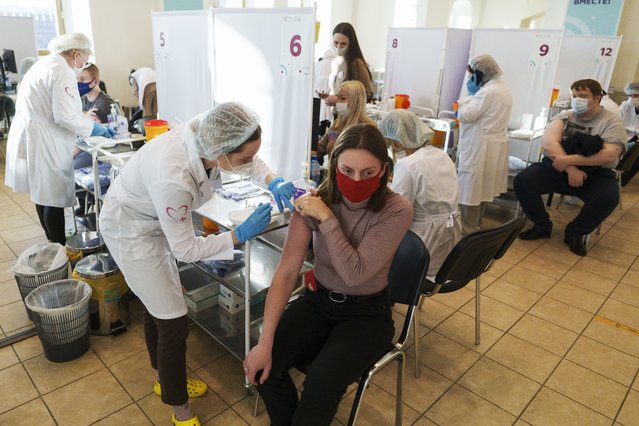 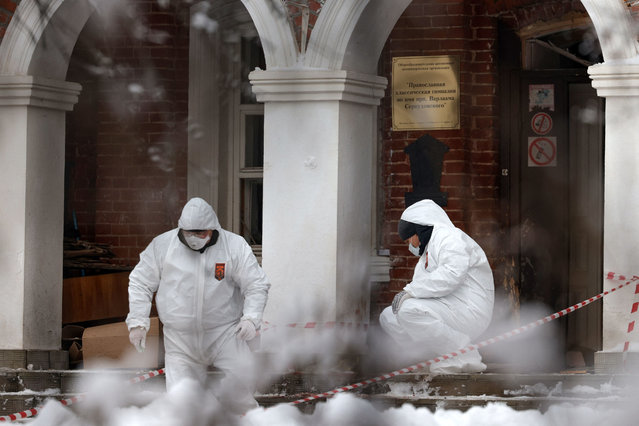 Experts work at the entrance to the Orthodox gymnasium of the Vvedenskiy Vladychniy convent after an 18-year-old graduate of this educational institution entered the school and blew himself up, in the city of Serpukhov, 100 kilometres (60 miles) south of Moscow, on December 13, 2021. (Photo by Dimitar Dilkoff/AFP Photo) 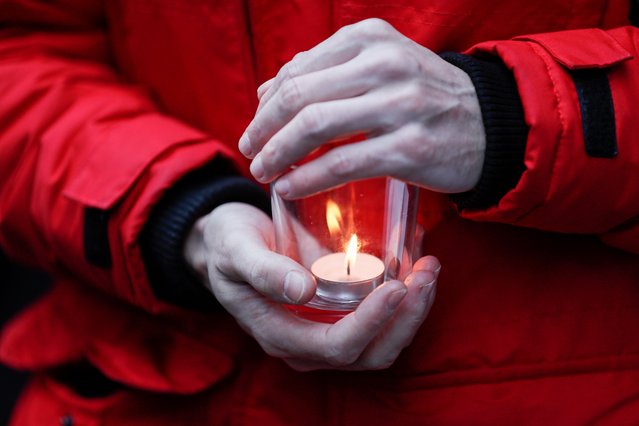 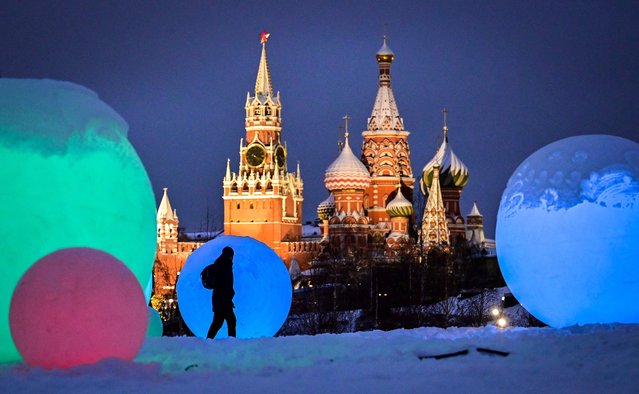 A pedestrian walks past a Chrsimas and New Year's decorations at Zaryadie park, in front of the Spasskaya tower of the Kremlin and the Saint Basil cathedral, in central Moscow, on December 15, 2021. (Photo by Yuri Kadobnov/AFP Photo) 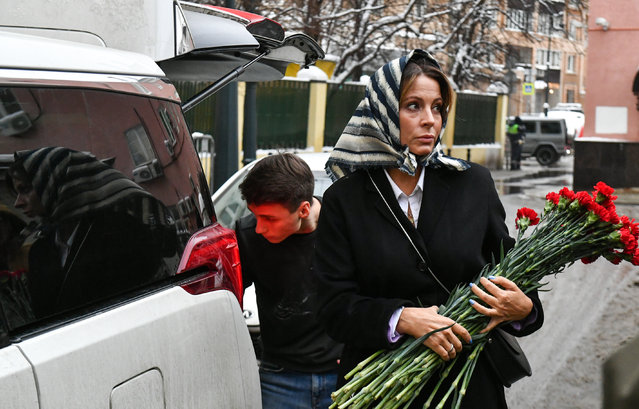 Russian actress Yevgeniya Kryukova is seen by the John the Apostle Church during a funeral service for Russian film director Sergei Solovyov in Moscow, Russia on December 16, 2021. Solovyov died on December 13, 2021, aged 77. (Photo by Maxim Grigoryev/TASS) 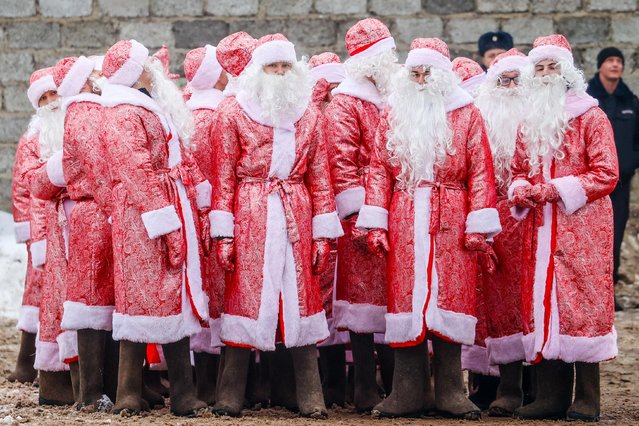 Father Frosts are seen as a 90-year old spruce tree cut down in the woods of the Shchyolkovsky District in Moscow Region, Russia on December 16, 2021 is sent to Moscow. The almost 28-metre high tree will be put up at the Moscow Kremlin's Sobornaya (Cathedral) Square this New Year and Christmas. (Photo by Vasily Fedosenko/TASS) 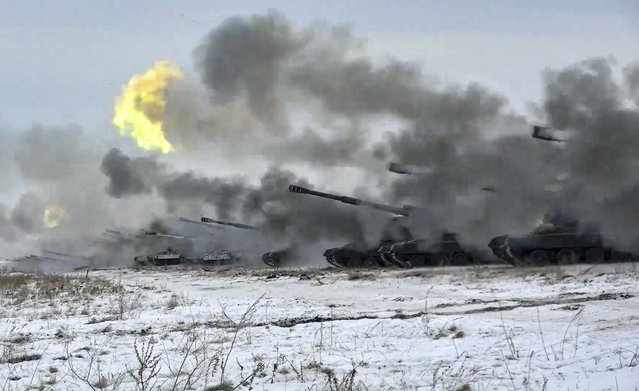 In this image taken from video and released by Russian Defense Ministry Press Service, Russian army's self-propelled howitzers fire during military drills near Orenburg in the Urals, Russia, Thursday, December 16, 2021. Russian troop buildup near Ukraine has drawn Ukrainian and Western concerns of a possible invasion but Moscow has denied planning to invade its neighbor. (Photo by Russian Defense Ministry Press Service via AP Photo) 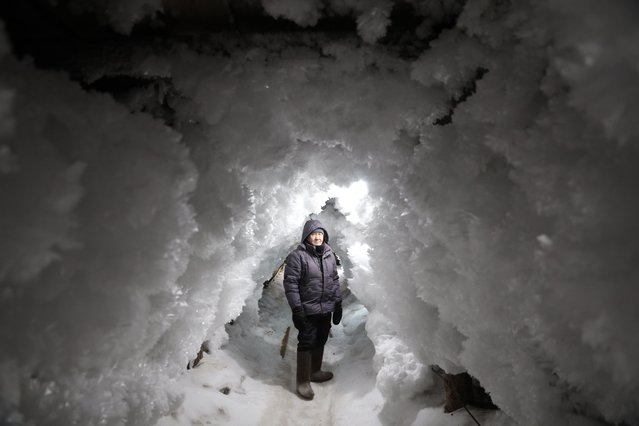 An ice residence of Chyskhaan, the Yakut Lord of the Cold, in the Ebe-Khaya cave near the village of Tomtor in Oymyakon District in the east of Russia’s Republic of Sakha (Yakutia) on December 16, 2021. The village of Oymyakon makes one of the two localities (along with the town of Verkhoyansk) of the Pole of Cold of the Northern Hemisphere, with the temperature of –71.2°C (96.2°F) recorded here in January 1924. Founded in 1931, Oymyakon District has deposits of gold, silver, tin, tungsten, lead, zinc, and antimony; the region’s agriculture is based on horse and reindeer breeding. (Photo by Vadim Skryabin/TASS) 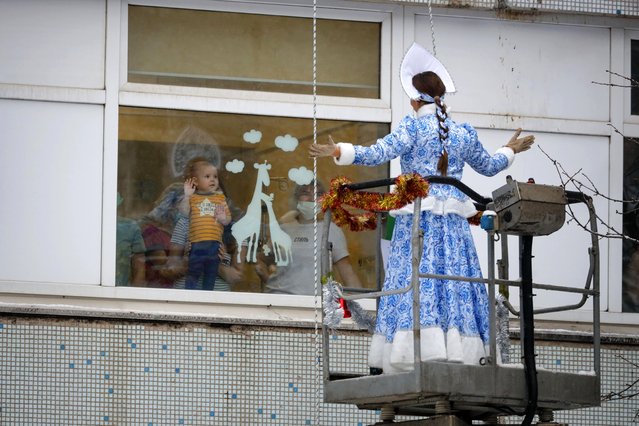