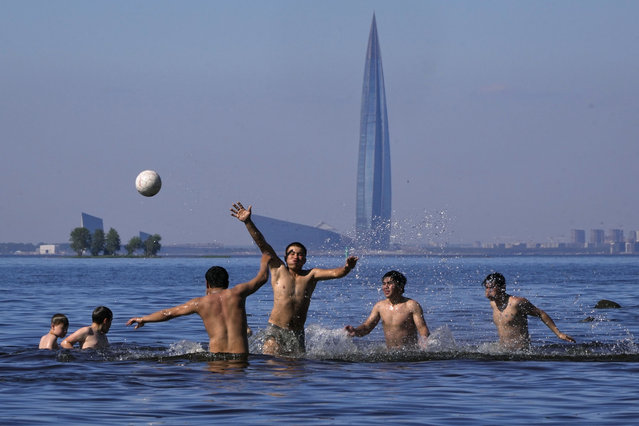 People play volleyball in the Gulf of Finland in St. Petersburg, Russia, Saturday, June 25, 2022, with the business tower Lakhta Centre, the headquarters of Russian gas monopoly Gazprom in the background. (Photo by Dmitri Lovetsky/AP Photo) 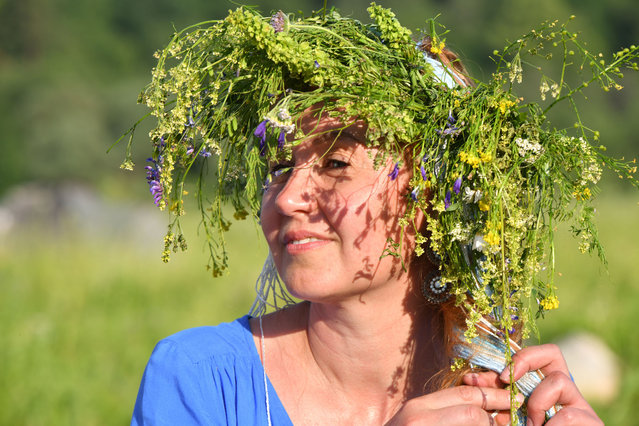 People wear floral head wreaths while celebrating Ivan Kupala, the annual celebration of Summer Solistice near Moscow, Russia on June 26, 2022. Ivan Kupala, also called Kupala Night is a traditional Slavic holiday that was originally celebrated on the shortest night of the year. The celebration relates to the summer solstice when nights are the shortest and includes a number of Slavic rituals including herb collecting, bonfire lighting, and bathing in the river. (Photo by Alexander Manzyuk/Anadolu Agency via Getty Images) 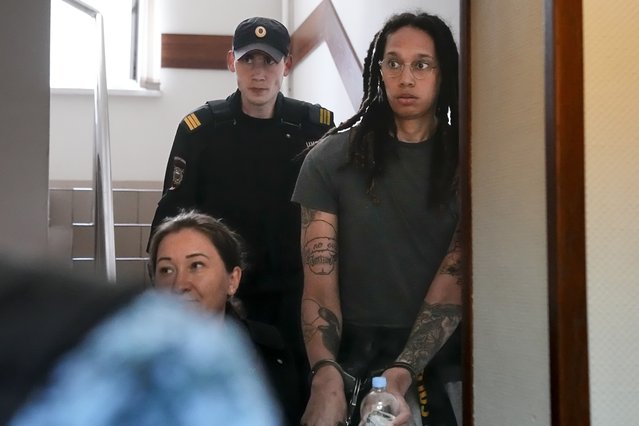 WNBA star and two-time Olympic gold medalist Brittney Griner is escorted to a courtroom for a hearing, in Khimki just outside Moscow, Russia, Monday, June 27, 2022. More than four months after she was arrested at a Moscow airport for cannabis possession, American basketball star Brittney Griner is to appear in court Monday for a preliminary hearing ahead of her trial. (Photo by Alexander Zemlianichenko/AP Photo) 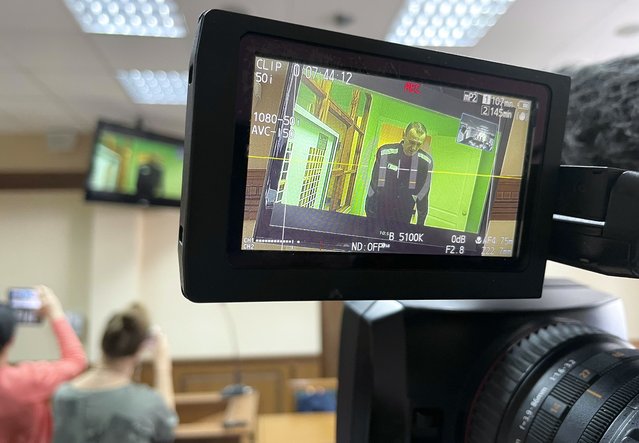 Russian opposition leader Alexei Navalny is seen on the TV camera screen, appears on a video link from prison provided by the Russian Federal Penitentiary Service in a courtroom in Vladimir, Russia, Tuesday, June 28, 2022. A Russian court has rejected an appeal by imprisoned opposition leader Alexei Navalny, who contended that prison authorities illegally prevented his lawyers from bringing necessary equipment including voice recorders and laptop computers to a court session held in a prison. (Photo by Kirill Zarubin/AP Photo) 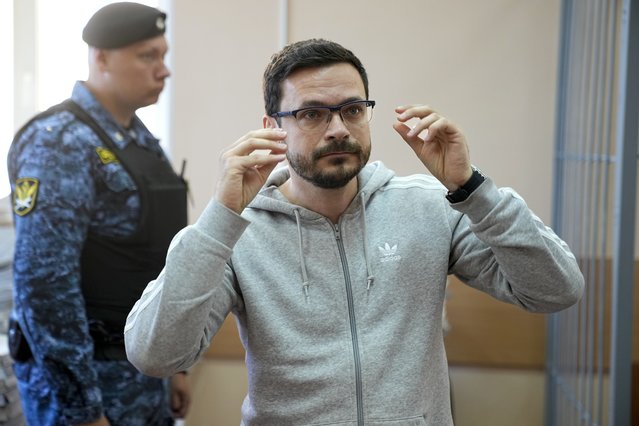 Ilya Yashin, Russian opposition activist and a municipal deputy of the Krasnoselsky district of Moscow, attends a court session in Moscow, Russia, Tuesday, June 28, 2022. On Tuesday, prominent opposition politician Ilya Yashin was sentenced to 15 days in jail on charges of failing to obey police. He was detained late Monday while walking in a park and police said he had grabbed one by the uniform and vulgarly insulted them. (Photo by Alexander Zemlianichenko/AP Photo) Lawyer Alexey Dudnik, left, covers the face of Vladimir Mau, the rector of the Russian Presidential Academy of National Economy and Public Administration in a courtroom during a hearing in Tverskoy court in Moscow, Russia, Thursday, June 30, 2022. A leading economic expert in Russia Vladimir Mau was detained Thursday on embezzlement charges as part of a high-profile case that some observers saw as linked to purges targeting members of the country's liberal elite. (Photo by Dmitry Serebryakov/AP Photo) American basketball star Brittney Griner went on trial in a Russian court in Moscow, Russia, on July 1, 2022. (Photo for The Washington Post) 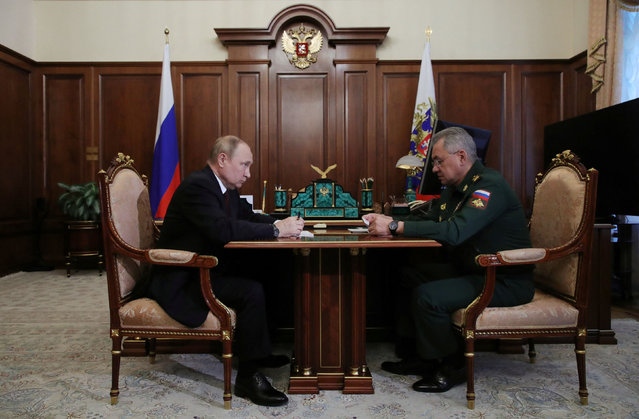 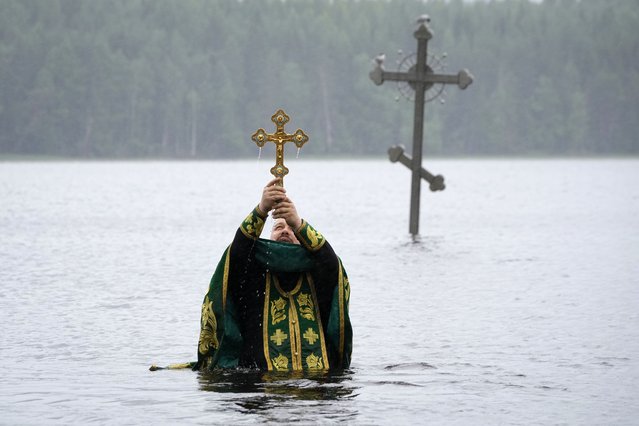 An Orthodox priest blesses water prior to a traditional pilgrim's swim around a cross, which marks St. Antony Dymsky of the Russian Orthodox Church in Dymskoye lake near Antonyevo-Dymsky Holy Trinity Monastery, 230 kilometers (143 miles) south-east from St. Petersburg, Russia, Thursday, July 7, 2022. The saint, who lived in this place in 13th century, used to spend several hours daily while standing and praying on the underwater stone in the lake. (Photo by Dmitri Lovetsky/AP Photo) 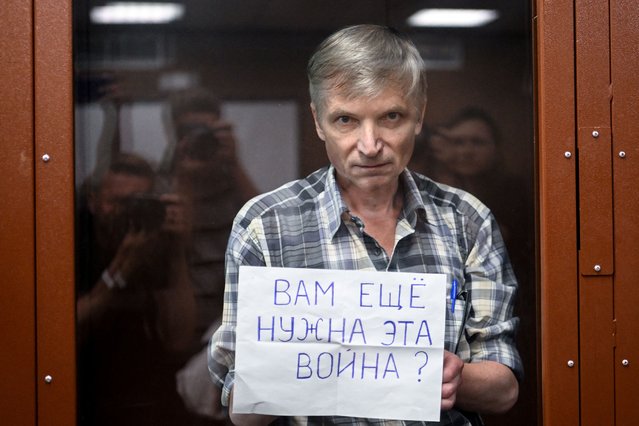 Moscow city deputy Alexei Gorinov, accused of spreading “knowingly false information” about the Russian army fighting in Ukraine, stands with a poster reading “Do you still need this war?” inside a glass cell during the vedict hearing in his trial at a courthouse in Moscow on July 8, 2022. (Photo by Kirill Kudryavtsev/AFP Photo) 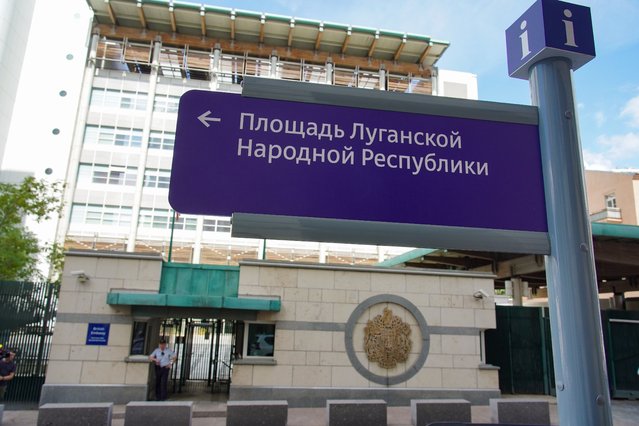 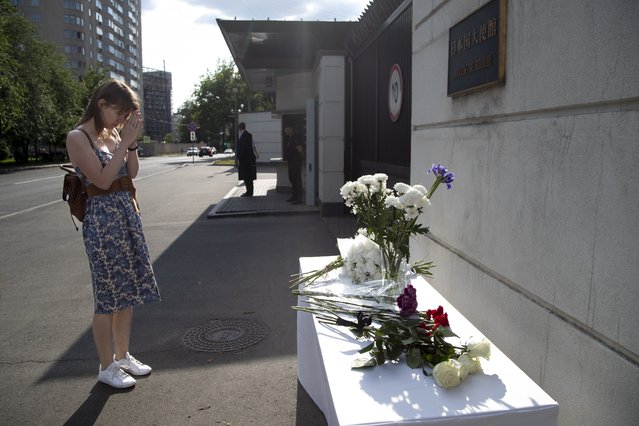 A woman reacts as she arrives to lay flowers in front of the entrance of the Japanese embassy in memory of the former Prime Minister Shinzo Abe, in Moscow, Friday, July 8, 2022. Abe was assassinated Friday on a street in western Japan by a gunman who opened fire on him from behind as he delivered a campaign speech – an attack that stunned the nation with some of the strictest gun control laws anywhere. (Photo by AP Photo/Stringer) 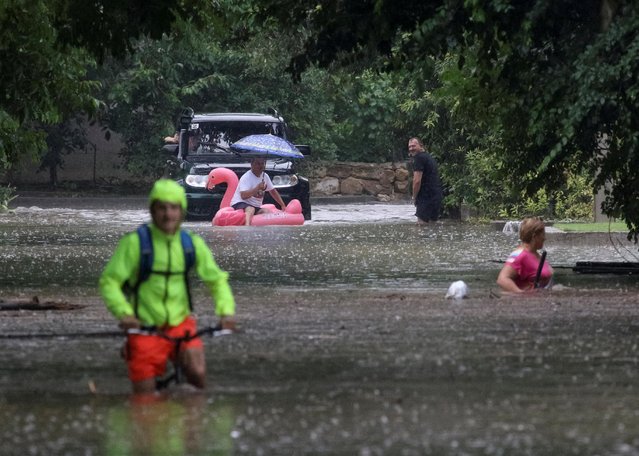 People travel across a flooded street after heavy rain in Yevpatoriya, Crimea on July 10, 2022. (Photo by Alexey Pavlishak/Reuters) 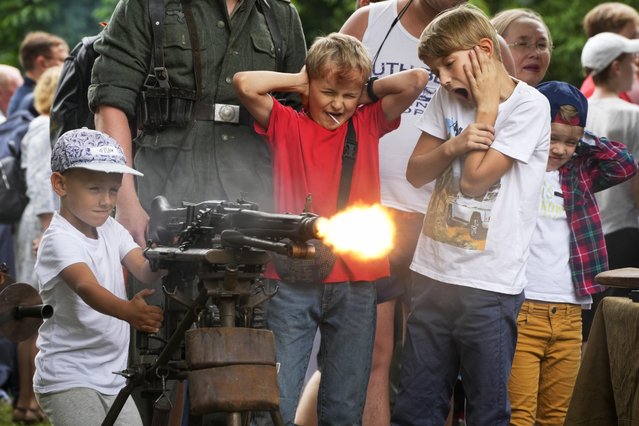 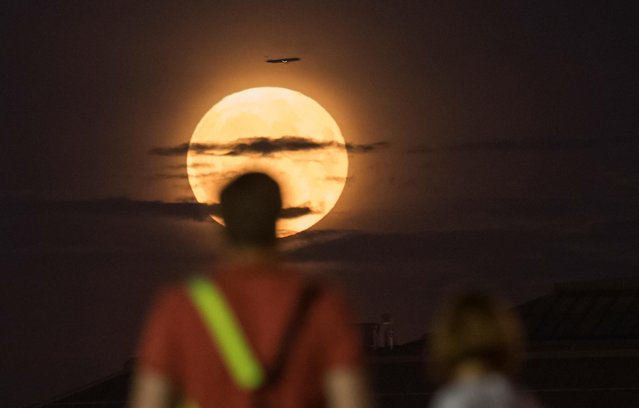 Tourists watch a full moon known as the “Buck Moon” as a commercial airplane flies by, in Moscow, Russia on July 13, 2022. (Photo by Shamil Zhumatov/Reuters) 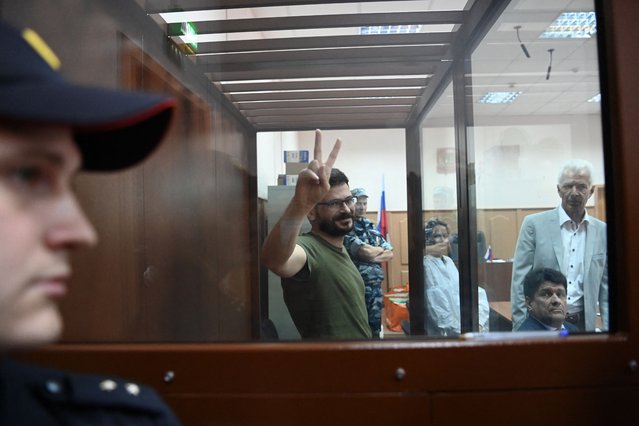 Russian opposition figure and Moscow city councillor Ilya Yashin, charged with “discrediting” the Russian army fighting in Ukraine, flashes the V sign during a hearing on his detention at the Basmanny district court in Moscow on July 13, 2022. (Photo by Kirill Kudryavtsev/AFP Photo) 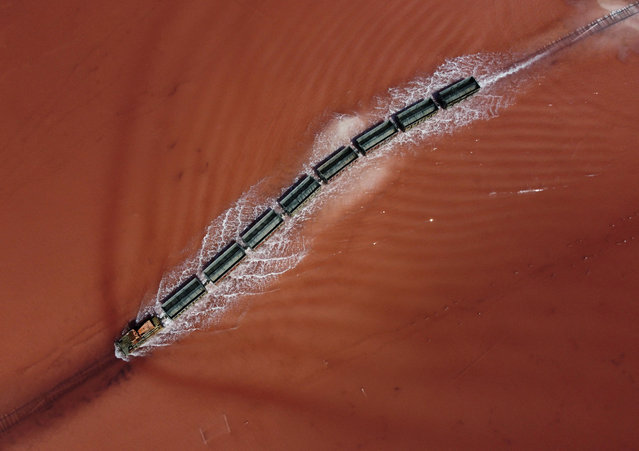 A train drives across the bed of a drained area near the salt harvesting site of the Burlinskoye salt lake in the Altai Region, Russia on July 20, 2022. (Photo by Alexey Malgavko/Reuters) 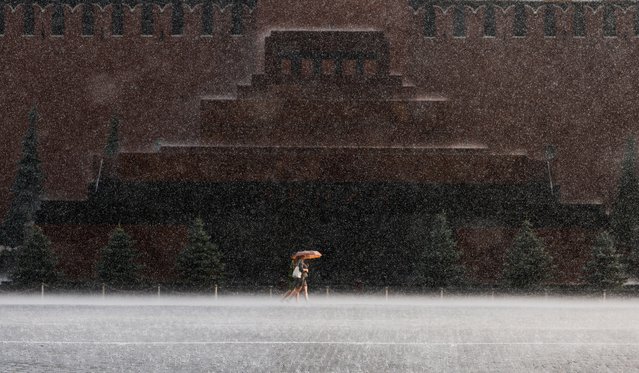 People walk by the Lenin mausoleum during heavy rain in the Red Square in Moscow, Russia on July 25, 2022. (Photo by Maxim Shemetov/Reuters) 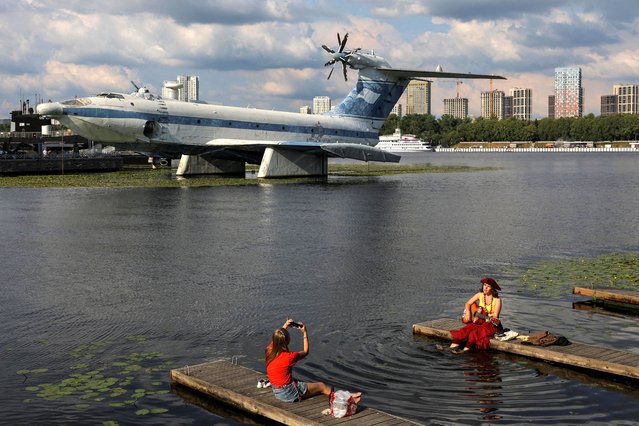 Women rest on a pier at the Moscow Canal, with the Soviet-made ekranoplan Orlyonok, which is a naval craft and a ground-effect vehicle in the Russian Navy maritime history complex, seen in the background in Moscow, Russia on July 25, 2022. (Photo by Evgenia Novozhenina/Reuters)
Edit Del
28 Jul 2022 04:45:00, post received 0 comments
Publication archive:
←   →
Popular tags:
All tags
Last searches: