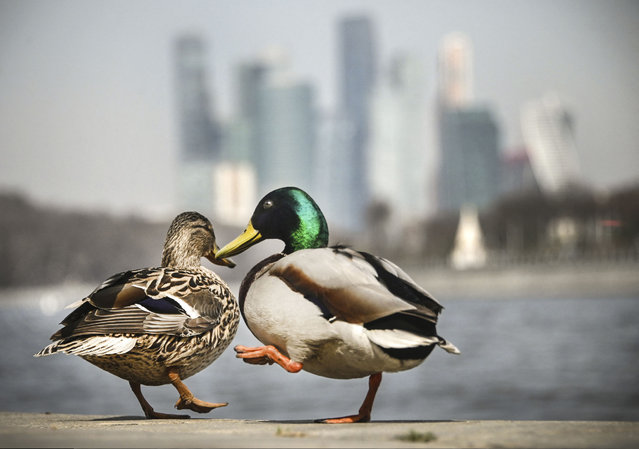 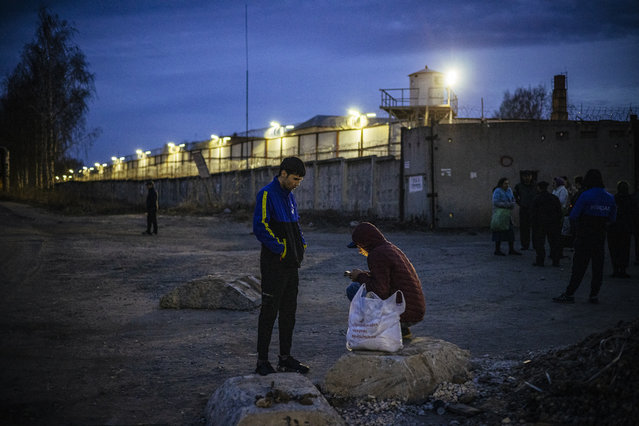 Migrant workers stand by the barbed wire fence of the IK-3 penal colony where jailed Kremlin critic Alexei Navalny was reportedly transferred in the city of Vladimir on April 19, 2021. Russia's penitentiary service said on April 19, 2021, it was transferring ailing Kremlin critic Alexei Navalny to a prison hospital, as the EU warned it would hold Moscow responsible for the state of his health. The United States on Sunday threatened Russia with “consequences” if President Vladimir Putin's major domestic opponent – who launched a hunger strike three weeks ago – dies in jail, with Navalny's private doctors warning at the weekend he could pass away at “any minute”. (Photo by Dimitar Dilkoff/AFP Photo) 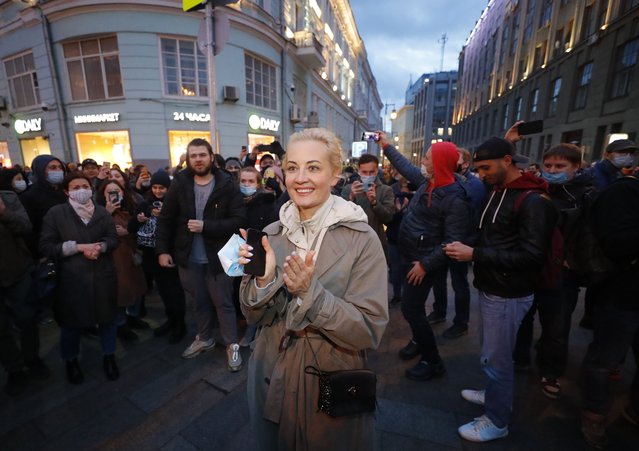 People applaud Yulia Navalnaya, the wife of the Russian jailed opposition leader Alexei Navalny, during an opposition rally in Moscow, Russia, 21 April 2021. Unauthorized rallies in support of Alexei Navalny are expected to be held throughout Russia. Russian opposition leader Alexei Navalny has been transferred from the penal colony No. 2 (IK-2) in Pokrov, Vladimir region, to the regional prison hospital in IK-3 in Vladimir for receiving vitamin therapy. The decision was taken amid Navalny's hunger strike and announced by his team members fearing for his life. (Photo by Sergei Ilnitsky/EPA/EFE) 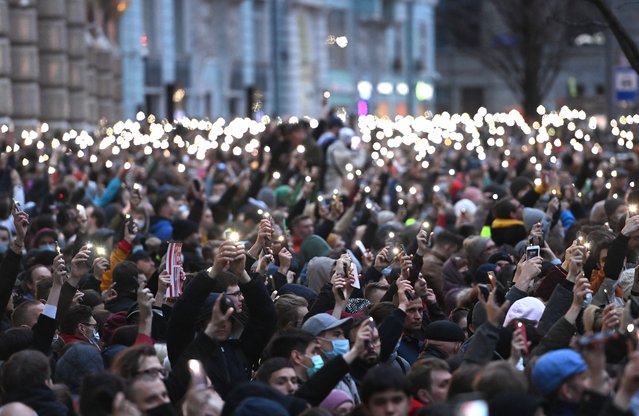 A protester runs away from the police during a protest in support of jailed opposition leader Alexei Navalny in St. Petersburg, Russia, Wednesday, April 21, 2021. Large numbers of people have been detained across the country in connection with the protests. (Photo by Dmitri Lovetsky/AP Photo) 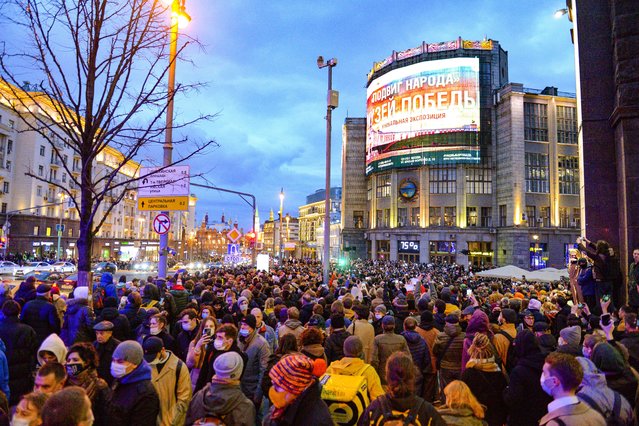 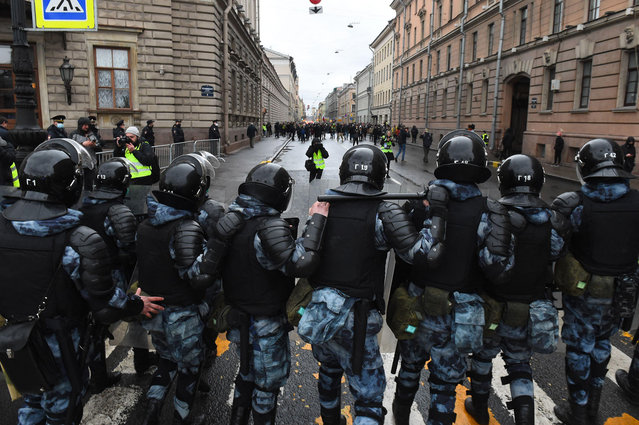 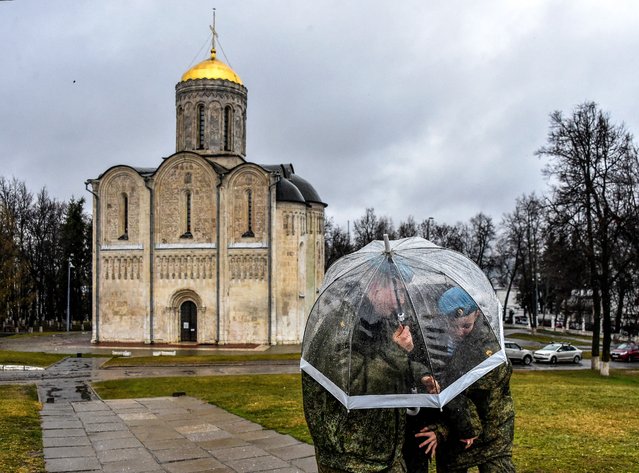 Cadets hide from the rain under an umbrella near a church in the town of Vladimir on April 21, 2021, where jailed Kremlin critic Alexei Navalny was reportedly transferred to the IK-3 penal colony. Russia's ties with the West have deteriorated to Cold War levels, with Moscow and Western capitals at loggerheads over jailed Kremlin critic Alexei Navalny, a Russian troop build-up on Ukraine's borders and a series of espionage scandals. (Photo by Vasily Maximov/AFP Photo) 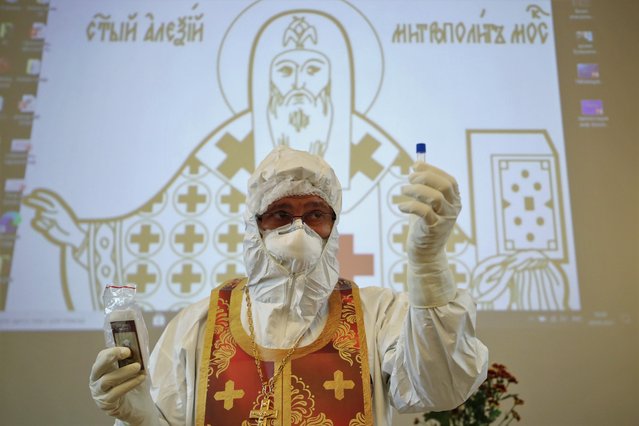 Archpriest Ioann Kudryavtsev shows a disposable vial of consecrated oil during his lecture titled “Pastoral Counselling Amid the Pandemic – PPE Use and Spiritual Guidance of COVID-19 Patients” at St Alexy Hospital Metropolitan of Moscow Hospital as part of a five-day course on spiritual care of red zone COVID-19 patients in Moscow, Russia on April 20, 2021. (Photo by Mikhail Tereshchenko/TASS) 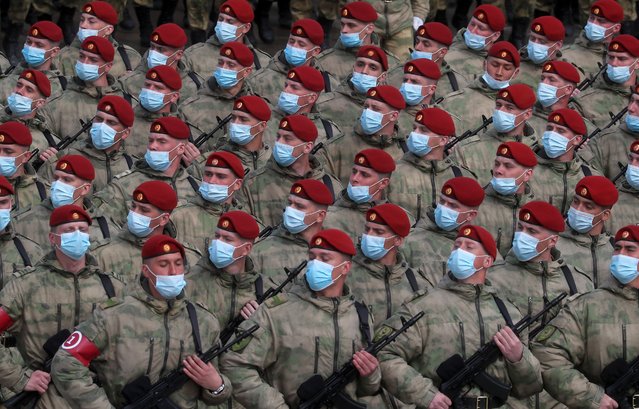 Servicemen march in formation during a rehearsal for a Victory Day military parade in Red Square marking the 76th anniversary of the victory over Nazi Germany in World War II, at the Alabino training ground in Moscow Region, Russia on April 16, 2021. (Photo by Alexander Shcherbak/TASS) 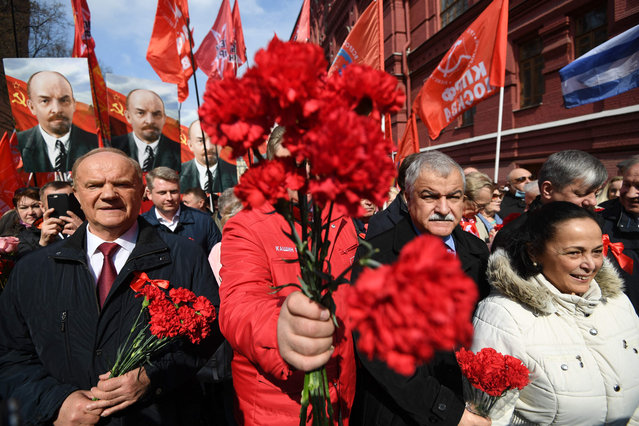 Russian Communist party leader Gennady Zyuganov (L) walks with supporters towards the Mausoleum of the Soviet state founder and revolutionary leader Vladimir Ilyich Ulyanov aka Lenin to attend a flower-laying ceremony marking the 151th anniversary of his birth, on Red Square in Moscow, on April 22, 2021. (Photo by Natalia Kolesnikova/AFP Photo) 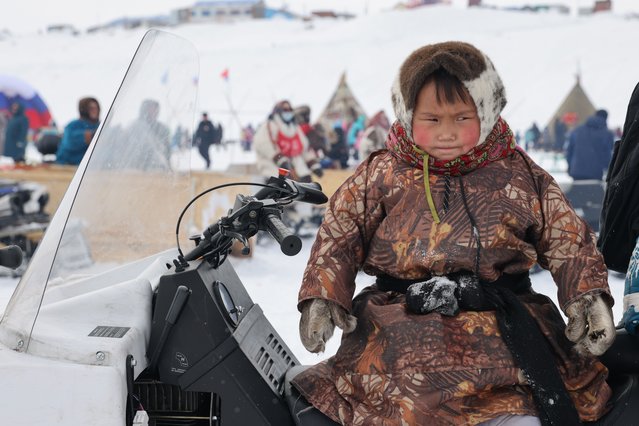 A child is seen during celebrations of Reindeer Breeder Day, the main holiday of indigenous peoples of the Russian Extreme North, in the village of Nosok on Taymyr Peninsula in north-central Siberia, Krasnoyarsk Territory, Russia on April 17, 2021. (Photo by Alexander Ryumin/TASS) 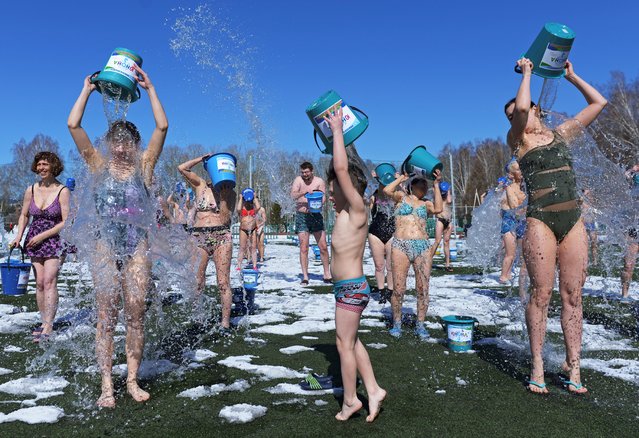 People dump buckets of ice water on themselves during the annual spring event “Awakening” in the Siberian city of Tomsk, Russia on April 17, 2021. (Photo by Taisiya Vorontsova/Reuters) 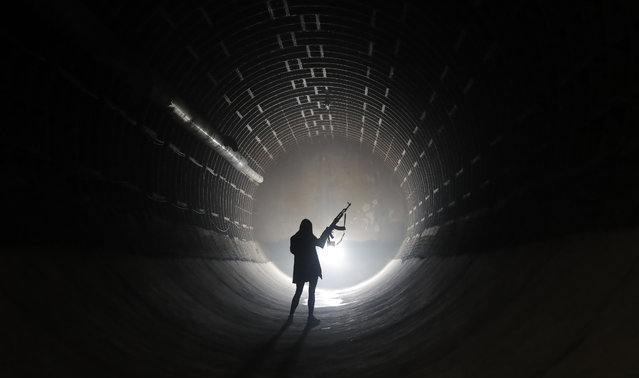 A visitor attends the nuclear defense Bunker 703, at a depth of 43 meters, in Moscow, Russia, 25 April 2021. The recently declassified facility of Cold War period, the bunker was in use by the ministry of Foreign Affairs until 2005. On 2018 was converted into the museum the Bunker 703. (Photo by Maxim Shipenkov/EPA/EFE) 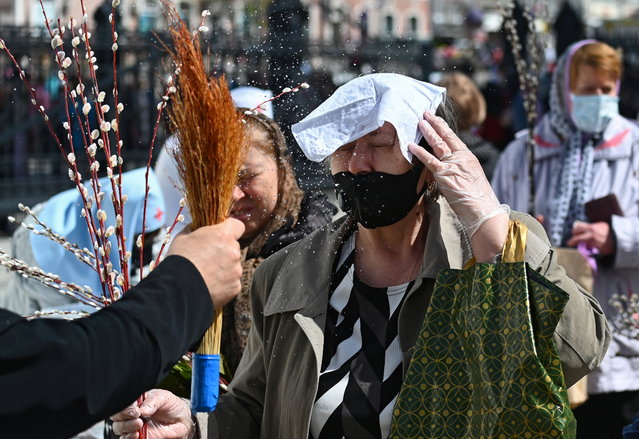 Believers are sprayed with holy water during a service, which marks the Orthodox feast of Palm Sunday, amid the coronavirus disease (COVID-19) outbreak in Rostov-on-Don, Russia on April 25, 2021. (Photo by Sergey Pivovarov/Reuters) 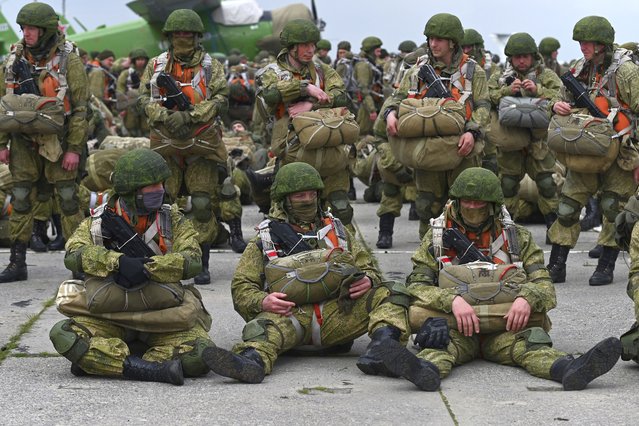 Russian paratroopers wait to be load into a plane for airborne drills during maneuvers in Taganrog, Russia, Thursday, April 22, 2021. Russia's defense minister on Thursday ordered troops back to their permanent bases following massive drills amid tensions with Ukraine, but said that they should leave their weapons behind in western Russia for another exercise later this year. (Photo by AP Photo/Stringer) 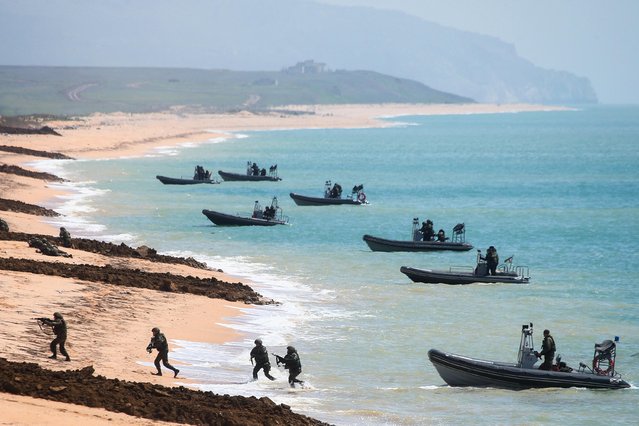 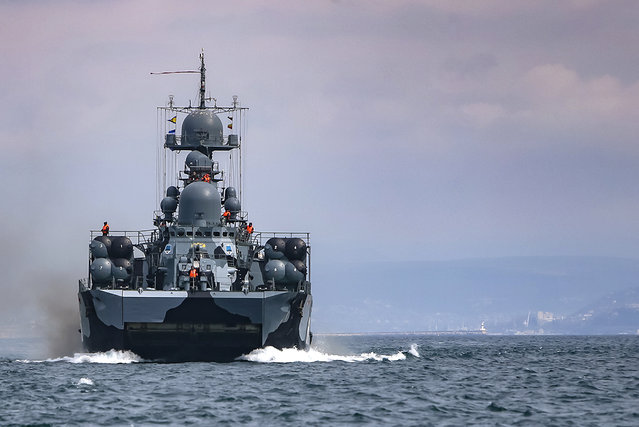 This handout photo released on Wednesday, April 14, 2021 by Russian Defense Ministry Press Service shows, A Russian navy ship is seen during navy drills in the Black Sea. Russia has insisted that it has the right to close areas of the Black Sea for foreign naval ships and rejected Ukrainian and Western criticism of the move. (Photo by Russian Defense Ministry Press Service via AP Photo) 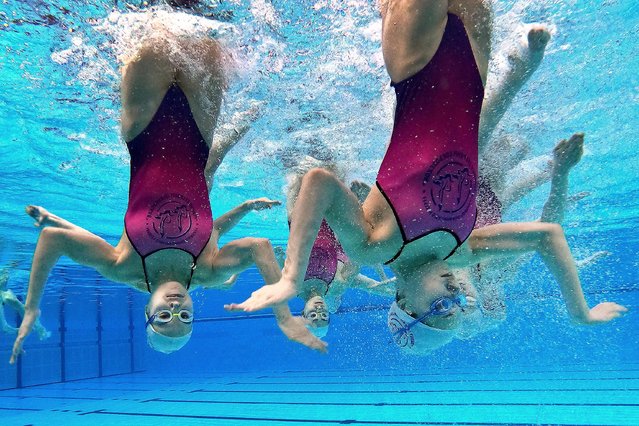 Athletes of the Tatarstan regional swimming team practice before Leg 3 of the 2021 FINA Artistic Swimming World Series at the Palace of Water Sports in Kazan, Russia on April 16, 2021. (Photo by Yegor Aleyev/TASS) 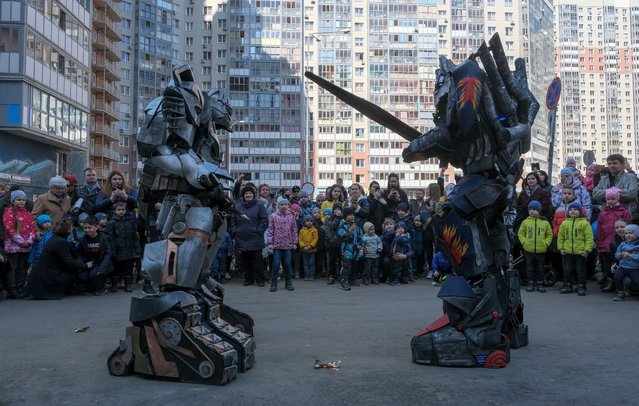