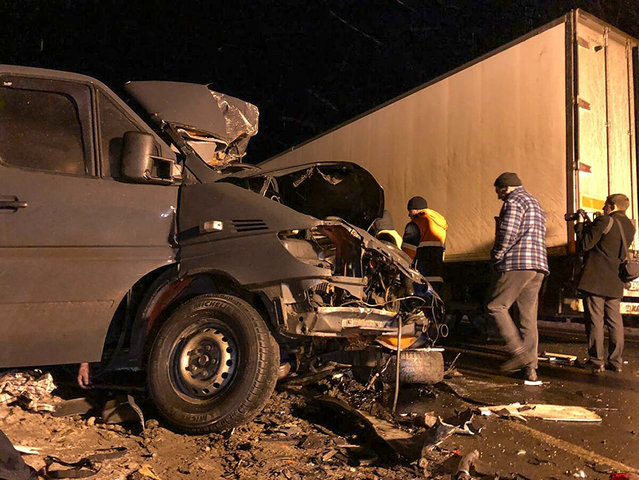 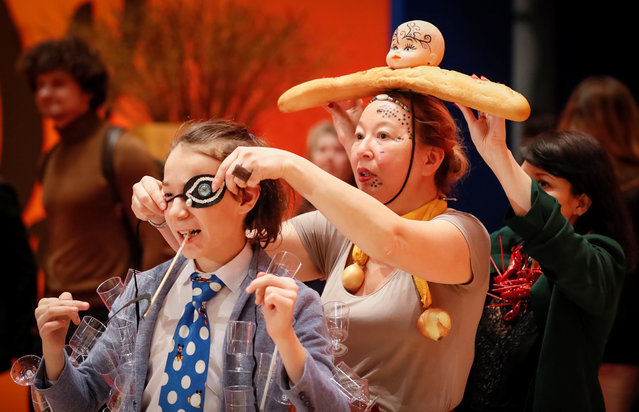 Visitors, granted free entrance for their themed costumes, fix them as they attend the Salvador Dali exhibition on Valentine's Day in Moscow, Russia on February 14, 2020. (Photo by Shamil Zhumatov/Reuters) 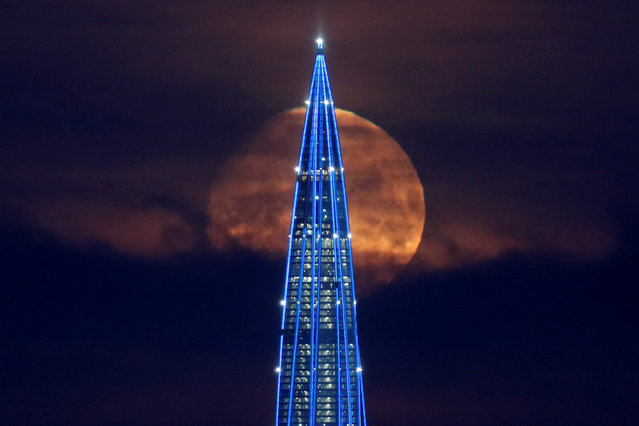 The Moon sets behind the business tower Lakhta Centre, which is under construction in Saint Petersburg, Russia on February 7, 2020. (Photo by Anton Vaganov/Reuters) 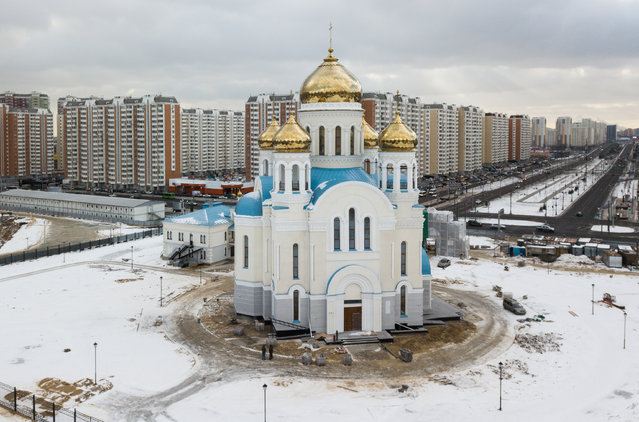 The Church of the Intercession under construction next to new housing developments in the neighbourhood of Nekrasovka, southeastern Moscow, Russia on February 5, 2020. (Photo by Mikhail Japaridze/TASS) 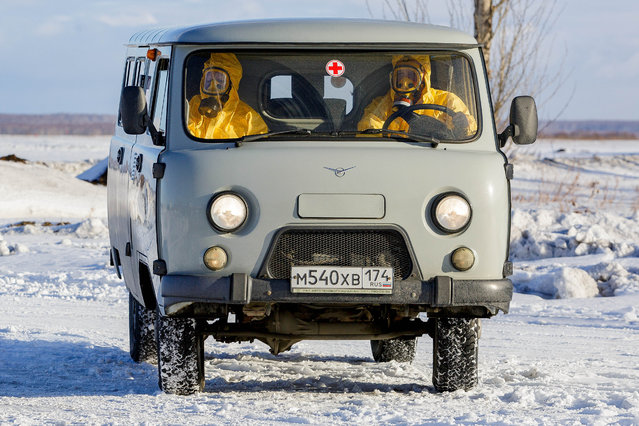 Participants dressed as WWII soldiers with the flags of the United Kingdom, the United States and the Soviet Union walk past a monument to the “Big Three” – UK Prime Minister Winston Churchill, US President Franklin Roosevelt, and Soviet leader Joseph Stalin – at Livadia Palace in Yalta, Russia on February 4, 2020. Russia is celebrating the 75th anniversary of the Yalta Conference (also known as the Crimean Conference), which was attended by the three leaders of the Allied nations in 4-11 February 1945, before the end of WWII. (Photo by Sergei Malgavko/TASS) 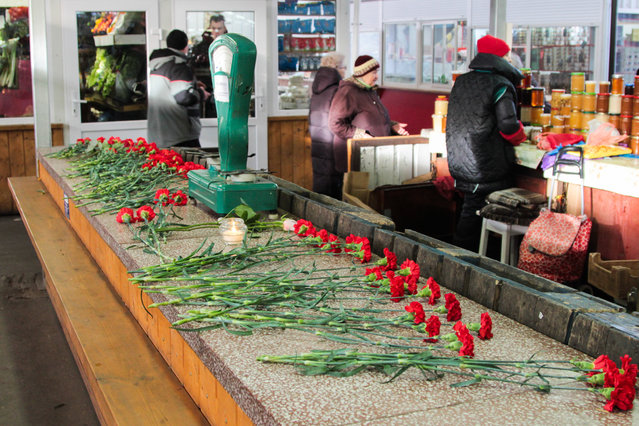 Flowers in memory of Vadim Yangolenko and Darya Yefimova, husband and wife, shot dead at Kaliningrad's Central Market in Kaliningrad, Russia on February 16, 2020. On February 15, 2020, 63-year-old Fazil Bakhramov opened fire at an entrance to the market, killed the husband and wife and inured their 13-year-old son. After the attack the shooter committed suicide. (Photo by Alexander Arkhipov/TASS) 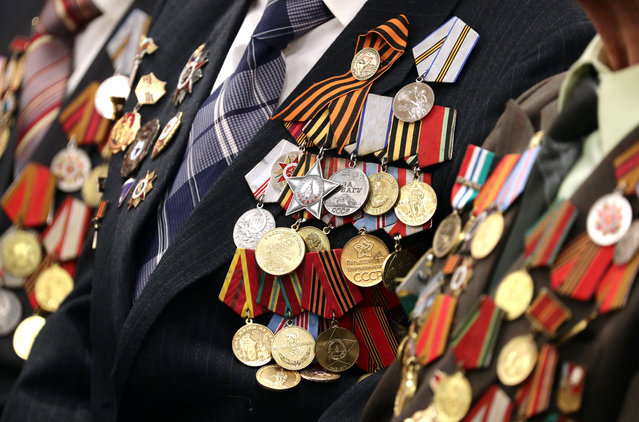 Orders and medals worn by a WWII veteran during a ceremony to award WWII veterans with the 75th Victory Anniversary medals, to mark the upcoming 75th anniversary of the victory over Nazi Germany in the 1941-45 Great Patriotic War, the Eastern Front of World War II, at the Siberian Memorial art gallery in Novosibirsk, Russia on February 14, 2020. (Photo by Kirill Kukhmar/TASS) 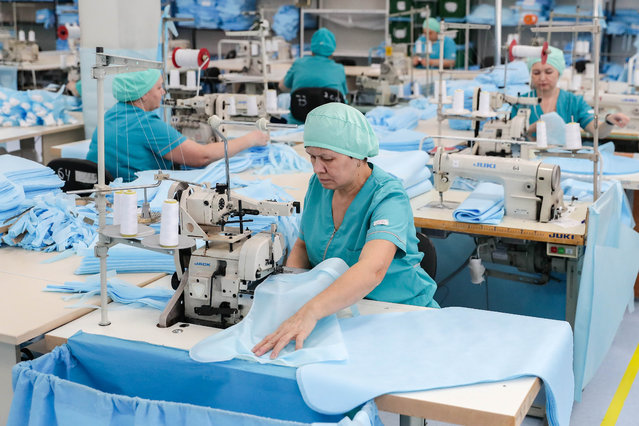 A disposable medical clothing sewing room at the Zdravmedtech enterprise manufacturing medical products in the city of Kamensk-Uralsky, Sverdlovsk Region, Russia on February 12, 2020. Zdravmedtech has received an order to produce 1,500 disposable anti-epidemic clothing sets for the doctors working in the quarantine zone in Tyumen Region where tourists evacuated from China are staying. A disposable set for an infectious diseases physician consists of overalls, shoe covers, a cap, and a face mask. (Photo by Donat Sorokin/TASS) 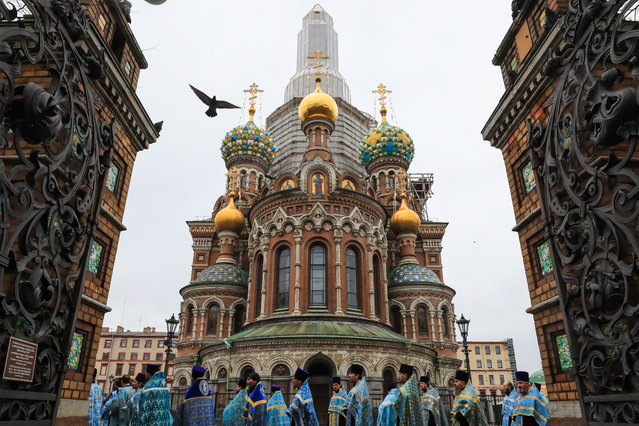 Participants in a religious procession to the Kazan Cathedral on International Orthodox Youth Day in St Petersburg, Russia on February 16, 2020. The holiday was initiated by the Syndesmos World Fellowship of Orthodox Youth. The Russian Orthodox Church takes part in celebrations since 2002. (Photo by Peter Kovalev/TASS) 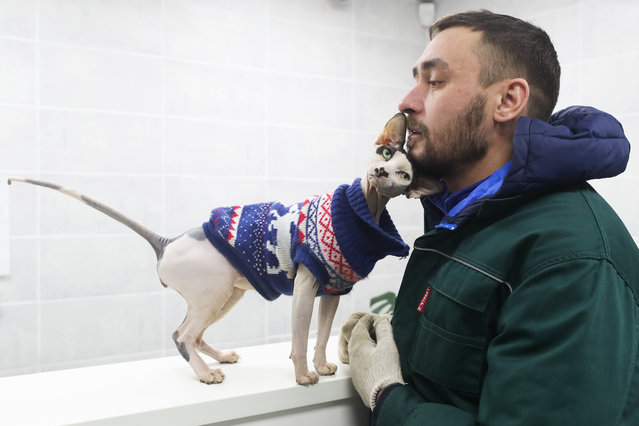 A staff worker with a cat in a pet hotel run by a Tatarstan's State Veterinary Service vet clinic in Sovetsky District of Kazan, Republic of Tatarstan, Russia on February 13, 2020. The vet clinic runs a pet hotel. (Photo by Yegor Aleyev/TASS) 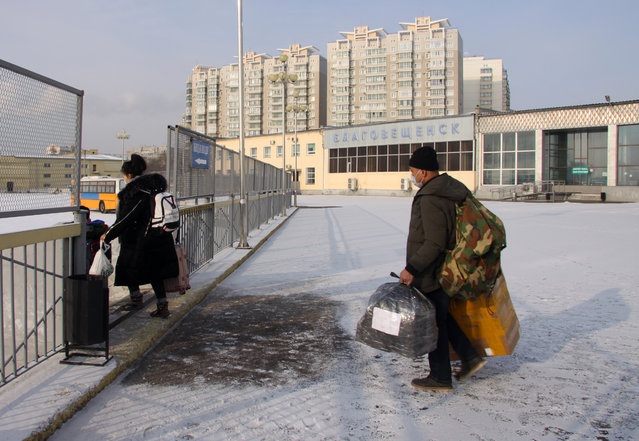 Chinese citizens passing through a temporary corridor opened at a border checkpoint between Blagoveshchensk and Heihe in Blagoveshchensk, Russia on February 1, 2020. Temporary corridors are opened to return Russian and Chinese citizens to their countries as the Russian government orders to close the border with China as a measure to prevent the coronavirus spread. All the people passing through the temporary corridor are tested for the virus. The 2019-nCoV pneumonia-like coronavirus outbreak began in Wuhan, China, in late December 2019; according to the latest reports, about 11,000 people globally have been infected, 259 have died from the virus. (Photo by Svetlana Mayorova/TASS) 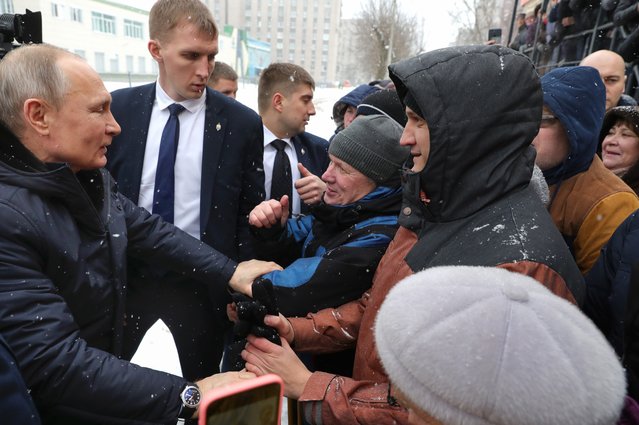 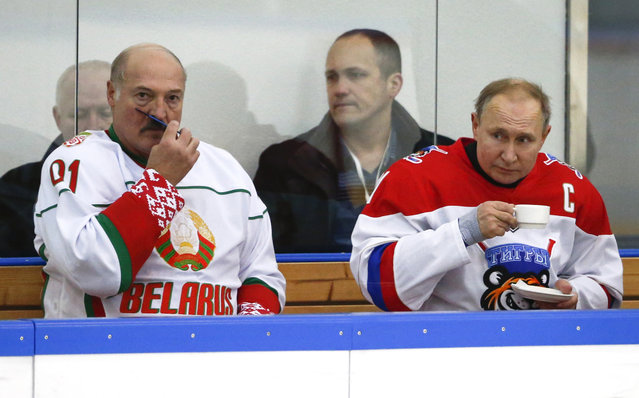 In this Friday, February 7, 2020 file photo, Russian President Vladimir Putin, right, and Belarusian President Alexander Lukashenko take a break during a match of the Night Hockey League teams in Rosa Khutor in the Black Sea resort of Sochi, Russia. Lukashenko on Friday, Feb. 14 says Russia insisted on merging the two states during last week's talks on further integrating the countries' economies. He says “this isn't integration, it's incorporation”. Tension has been running high between the neighboring ex-Soviet states for several months now. (Photo by Alexander Zemlianichenko/AP Photo/File) 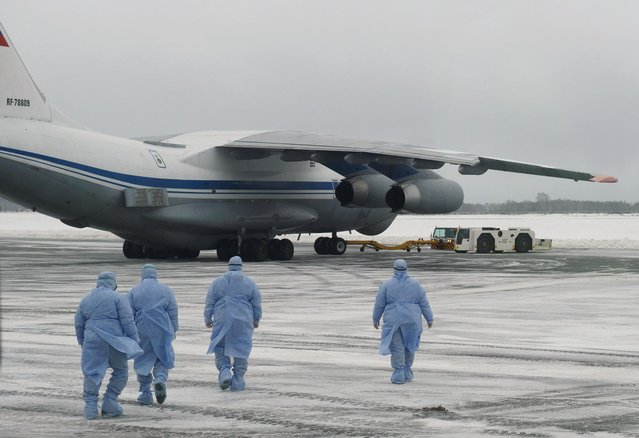 Medical staff members walk towards a military plane, which evacuated citizens of Russia and ex-Soviet countries from China's Wuhan province, at the Roshchino International Airport outside Tyumen, Russia, February 5, 2020. (Photo by Yuri Shestak/Vsluh.ru via Reuters) 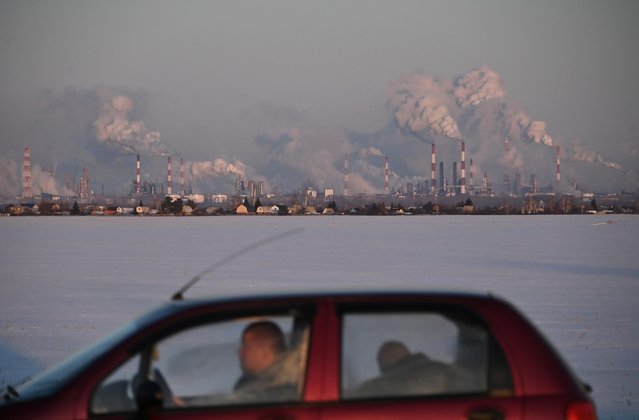 A car drives past the Gazprom Neft's oil refinery in Omsk, Russia on February 10, 2020. (Photo by Alexey Malgavko/Reuters) 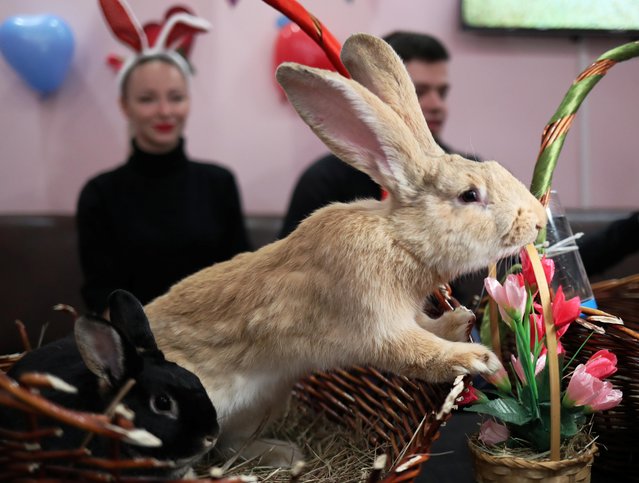 Rabbits sit in a basket at a rabbit cafe on Valentine's Day in Moscow, Russia on February 14, 2020. (Photo by Evgenia Novozhenina/Reuters) 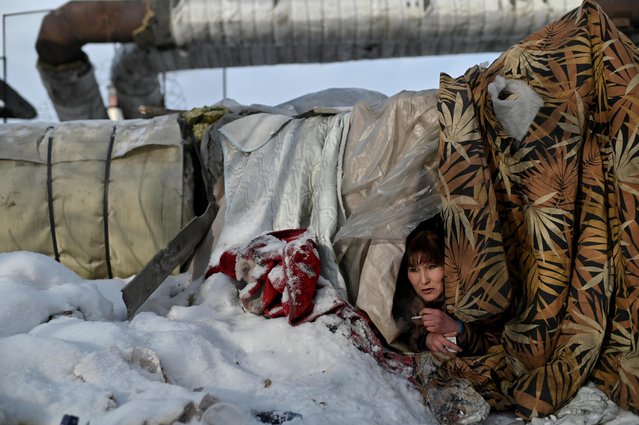 Galiya, 29, who is homeless, looks out from Alexey's makeshift shelter in Omsk, Russia, February 14, 2020. (Photo by Alexey Malgavko/Reuters) An emergency medic helps Alla Ilyina, who broke out of the hospital on Feb. 7 after learning that she would have to spend 14 days in isolation instead of the 24 hours doctors promised her, to fasten a seat belt inside an ambulance after a court session in St.Petersburg, Russia, Monday, February 17, 2020. A woman who escaped from a hospital in St. Petersburg, where she was being kept in isolation for possible inflection by the new coronavirus, was ordered by court on Monday to return back to the quarantine for at least two days. (Photo by Dmitri Lovetsky/AP Photo) 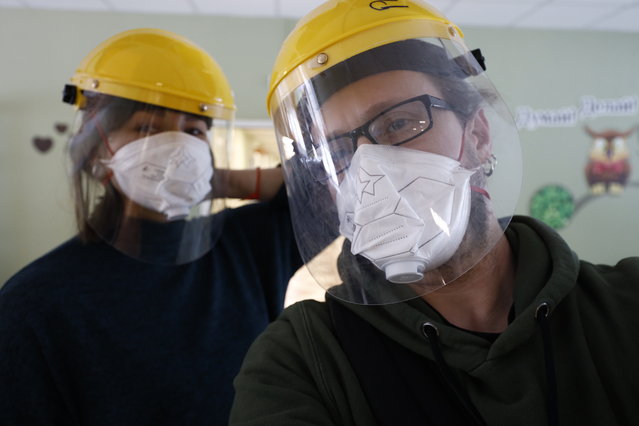 In this photo taken on Friday, February 21, 2020, medical workers disinfect rooms in the sanatorium after quarantine period has ended in Bogandinsky in the Tyumen region, about 2150 kilometers (1344 miles) east of Moscow, Russia. 144 people who were evacuated from the epicenter of the CONVID-19 coronavirus outbreak in Wuhan, China, and were released from a 14-day quarantine in western Siberia. None of them tested positive for the virus. Russian authorities are going to great lengths to prevent the new coronavirus from spreading in the capital and elsewhere. (Photo by Maxim Slutsky/AP Photo) 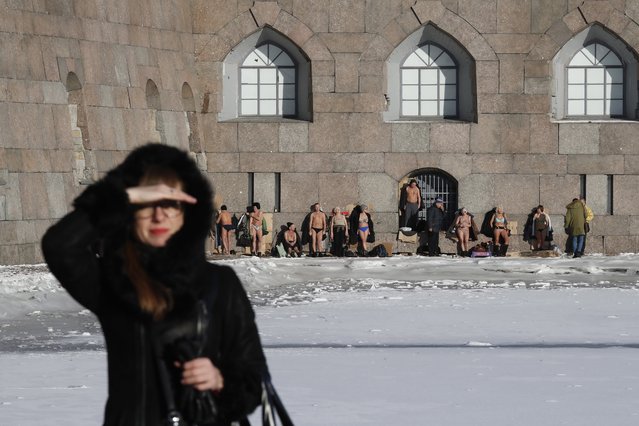