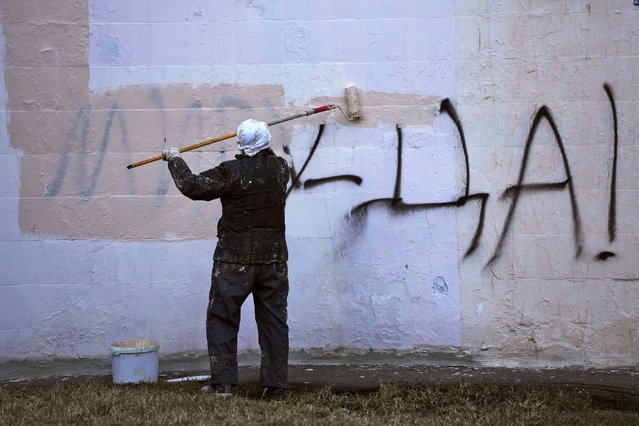 A worker paints over a writing reading “Yes to Peace!” on a wall of an apartment building in St. Petersburg, Russia, Friday, March 18, 2022. (Photo by AP Photo/Stringer, File) 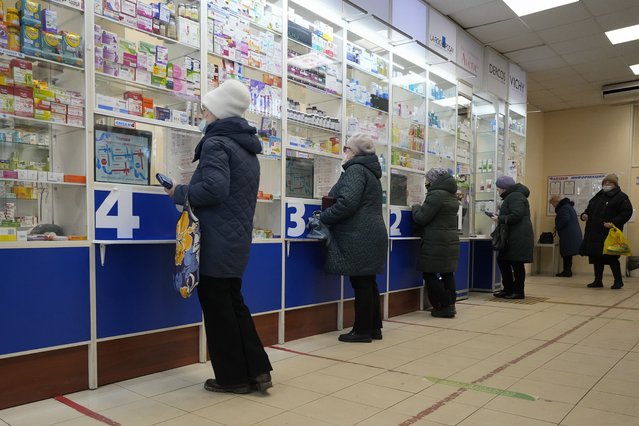 Customers stand at the windows buying medicines in a pharmacy in St. Petersburg, Russia, Friday, April 1, 2022. (Photo by AP Photo/Stringer) 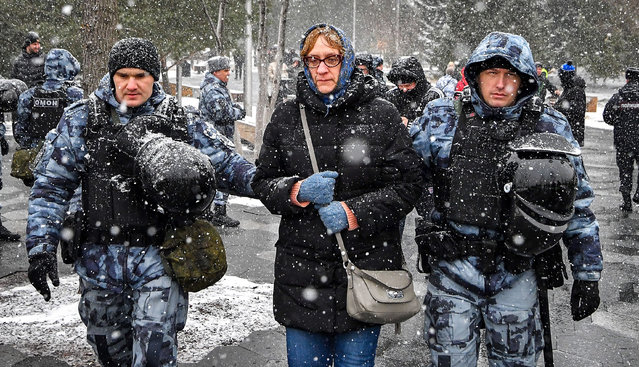 Police officers detain a woman during a protest against Russian military action in Ukraine, in central Moscow on April 2, 2022. (Photo by AFP Photo/Stringer) 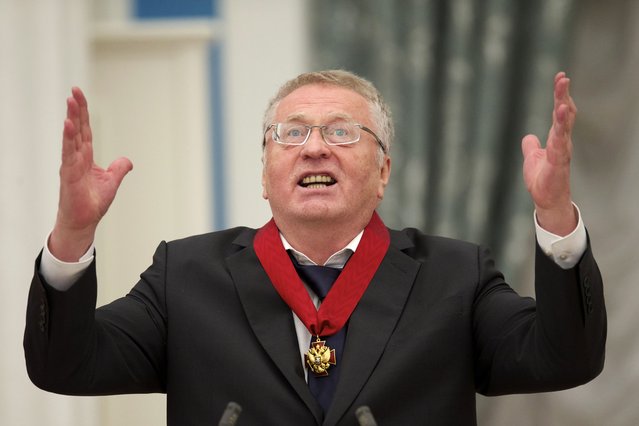 Russian lawmaker Vladimir Zhirinovsky speaks, after he was awarded by Russian President Vladimir Putin, during an awarding ceremony in Moscow's Kremlin, Russia, September 22, 2016. On Wednesday, April 6, 2022 State Duma speaker Vyacheslav Volodin said that Zhirinovsky, who has been the head of Russia's nationalist Liberal Democratic Party for three decades, died at the age of 75. (Photo by Ivan Sekretarev/AP Photo/Pool, File) 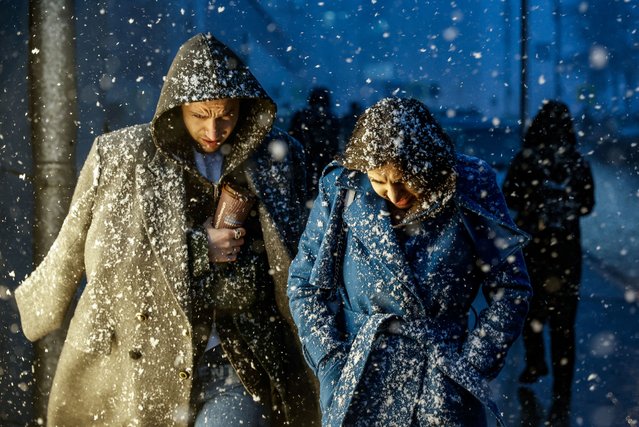 People walk in the street during heavy snowfall in Moscow, Russia, April 6, 2022. (Photo by Maxim Shemetov/Reuters) 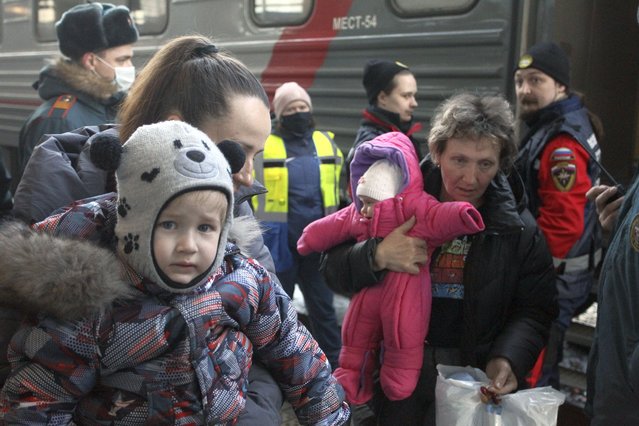 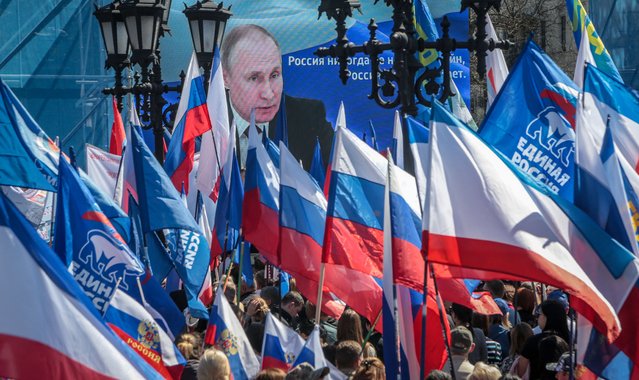 People wave flags during a rally in support of the Russian military operation in Ukraine, in Simferopol, Crimea on April 7, 2022. (Photo by AFP Photo/Stringer) 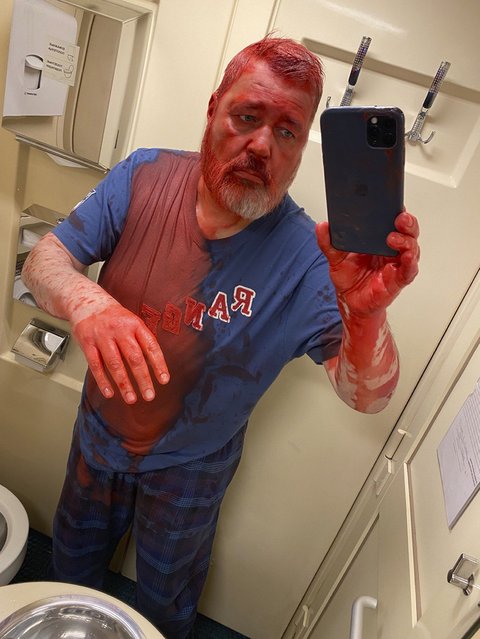 In this photo published on Novaya Gazeta Europe's Telegram channel, Nobel Peace Prize-winning newspaper editor Dmitry Muratov takes a selfie after he said he was attacked on a Russian train by an assailant who poured red paint on him, causing his eyes to burn severely, Russia, Thursday, April 7, 2022. Muratov told Novaya Gazeta Europe, a project launched by newspaper staff after the paper suspended operation last week under government pressure, that the Thursday assault happened on a train heading from Moscow to Samara. (Photo by Novaya Gazeta Europe's Telegram channel via AP Photo) 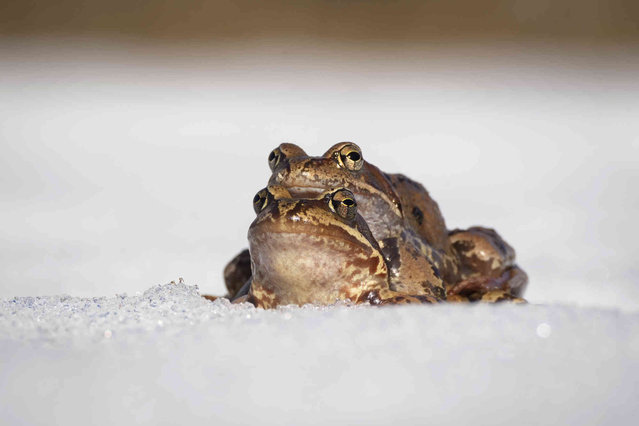 Frogs mate in the snow in a park outside St. Petersburg, Russia, Wednesday, April 13, 2022. (Photo by AP Photo/Stringer) 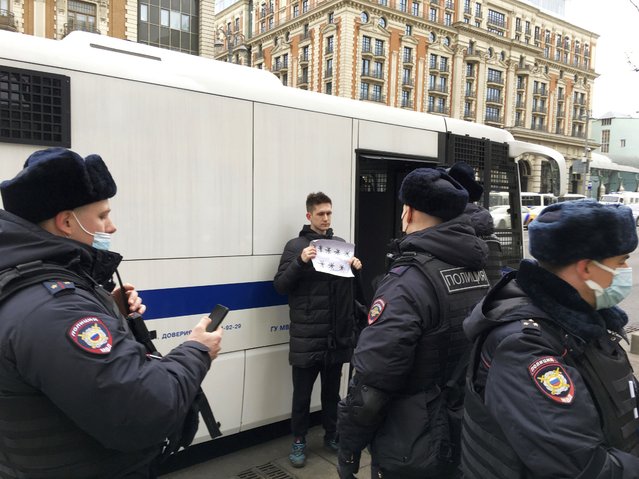 Dmitry Reznikov holding a blank piece of paper with eight asterisks that could have been interpreted as standing for “No to war” in Russian, stands next to a Police van as he was detained in Moscow, Russia, Sunday, March 13, 2022. The court found him guilty of discrediting the armed forces and fined him 50,000 rubles ($618) for holding the sign in central Moscow in a mid-March demonstration that lasted only seconds before police detained him. (Photo by SOTA via AP Photo) 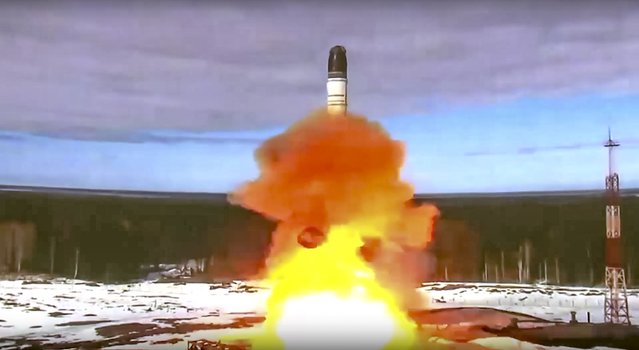 In this handout photo released by Roscosmos Space Agency Press Service on Wednesday, April 20, 2022, the Sarmat intercontinental ballistic missile is launched from Plesetsk in Russia's northwest. Russia said on Wednesday it had conducted a first test launch of its Sarmat intercontinental ballistic missile, a new and long-awaited addition to its nuclear arsenal which President Vladimir Putin said would make Moscow's enemies stop and think. (Photo by Roscosmos Space Agency Press Service via AP Photo) 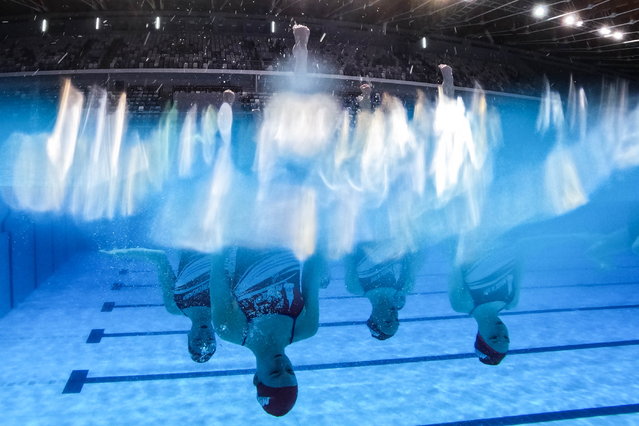 Team Moscow 1 practise before competing in the women's team technical event at the 2022 Russian Synchronised Swimming Championships at the Palace of Water Sports in Kazan, Tatarstanon April 19, 2022. (Photo by Yegor Aleyev/TASS) 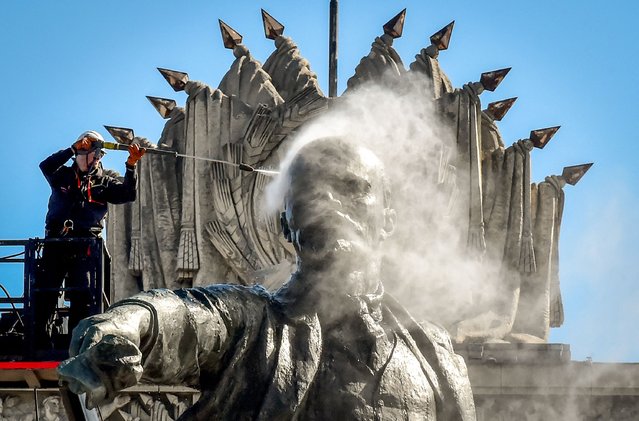 A worker cleans a statue of the founder of the Soviet Union Vladimir Lenin at Moscow Square in front of the House of Soviets in Saint-Petersburg on April 21, 2022. (Photo by Olga Maltseva/AFP Photo) 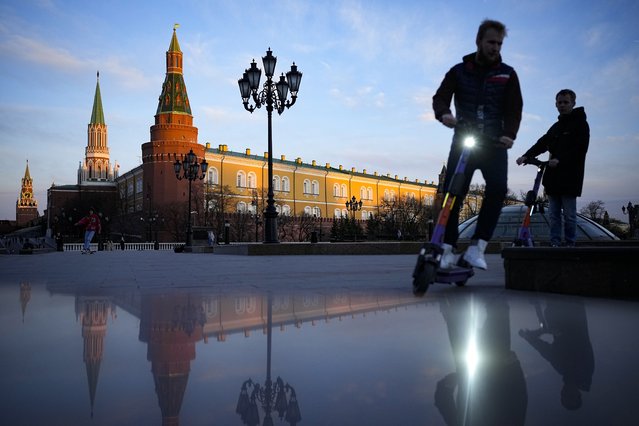 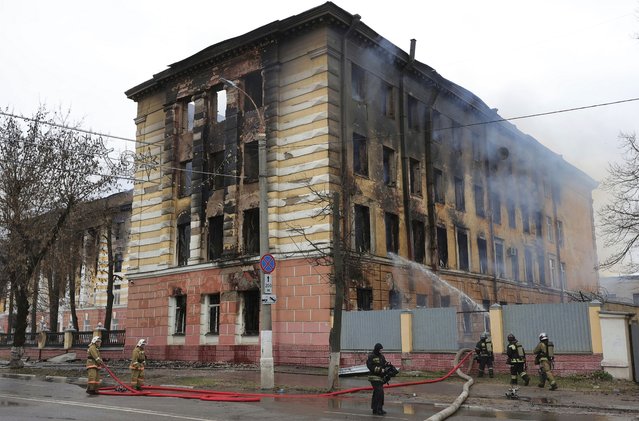 Firefighters hose down the burning building of the Central Research Institute of the Aerospace Defense Forces in the Russian city of Tver, Russia, Thursday, April 21, 2022. The press service of the local administration announced later in a statement that six people were killed and at least 27 were injured and over 10 people may be still trapped inside the building. (Photo by Vitaliy Smolnikov/Kommersant Publishing House via AP Photo) 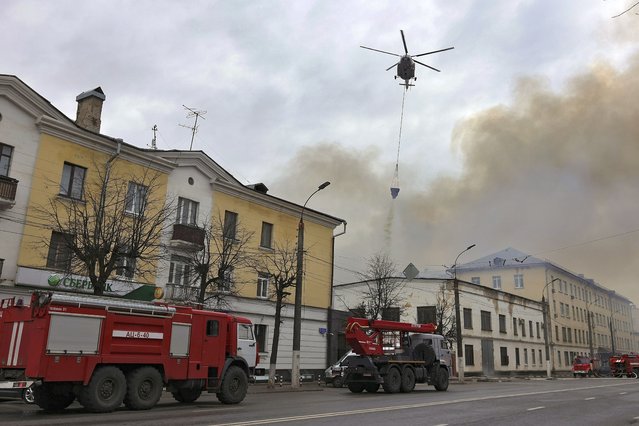 A helicopter dumps water onto the burning building of the Central Research Institute of the Aerospace Defense Forces in the Russian city of Tver, Russia, Thursday, April 21, 2022. (Photo by Vitaliy Smolnikov/Kommersant Publishing House via AP Photo) 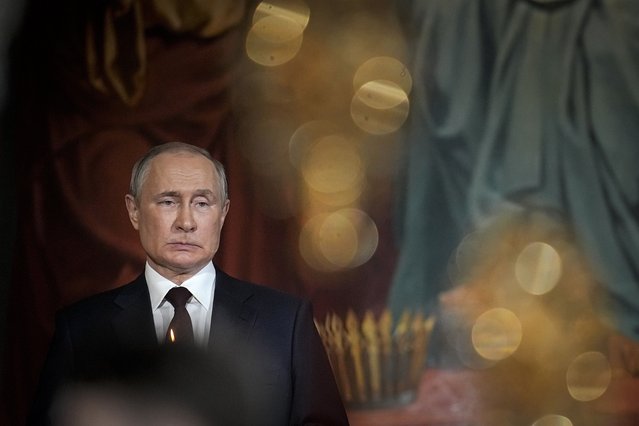 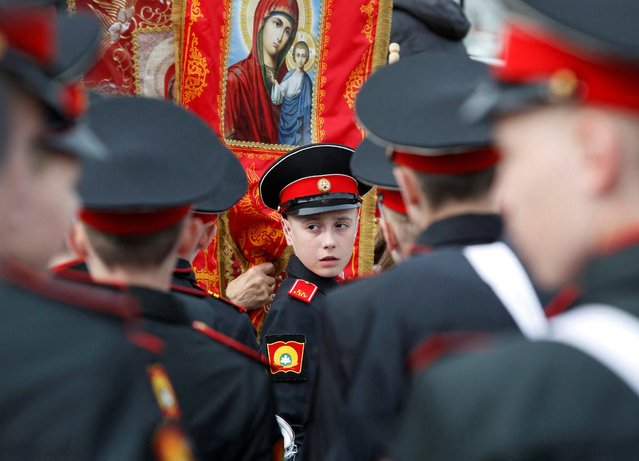 Cadets take part in the Orthodox Easter procession in Yekaterinburg, Russia on April 24, 2022. (Photo by Reuters/Stringer) 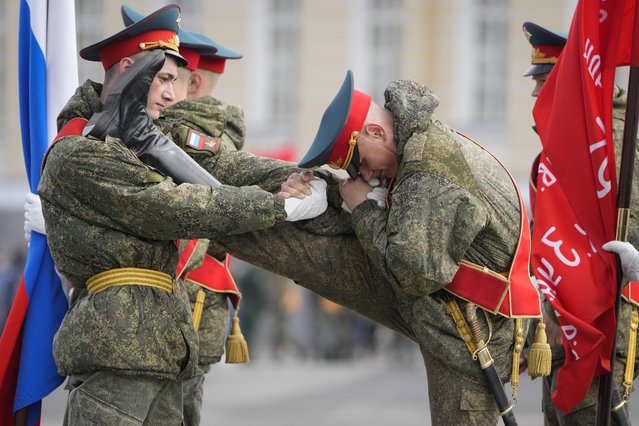 Honour guard soldiers warm up prior to a rehearsal for the Victory Day military parade which will take place at Dvortsovaya (Palace) Square on May 9 to celebrate 77 years after the victory in World War II in St. Petersburg, Russia, Tuesday, April 26, 2022. (Photo by Dmitri Lovetsky/AP Photo) 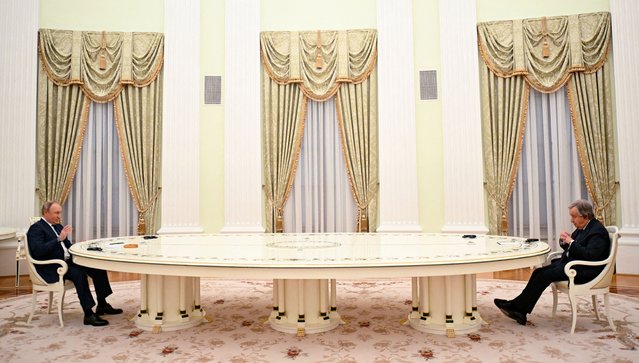