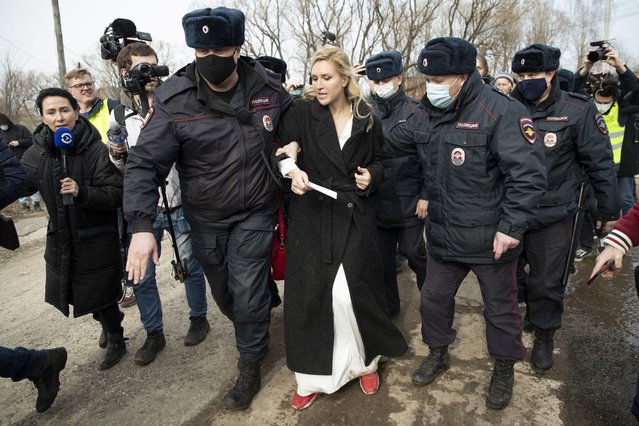 Police officers detain the Alliance of Doctors union's leader Anastasia Vasilyeva at the prison colony IK-2, which stands out among Russian penitentiary facilities for its particularly strict regime, in Pokrov in the Vladimir region, 85 kilometers (53 miles) east of Moscow, Russia, Tuesday, April 6, 2021. Doctors from the Navalny-backed Alliance of Doctors announced going to the Pokrov prison on Tuesday to demand the opposition leader gets qualified medical help from independent doctors after he complained about pain in his leg and back. (Photo by Pavel Golovkin/AP Photo) 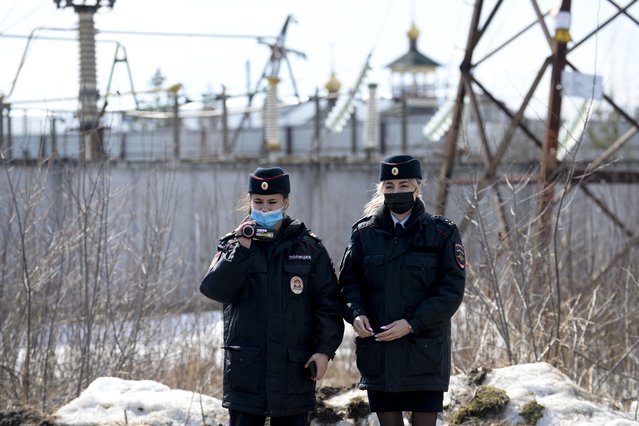 Police officers film as the Alliance of Doctors union's leader Anastasia Vasilyeva speaks to the media at the prison colony IK-2, which stands out among Russian penitentiary facilities for its particularly strict regime, in Pokrov in the Vladimir region, 85 kilometers (53 miles) east of Moscow, Russia, Tuesday, April 6, 2021. (Photo by Denis Kaminev/AP Photo) 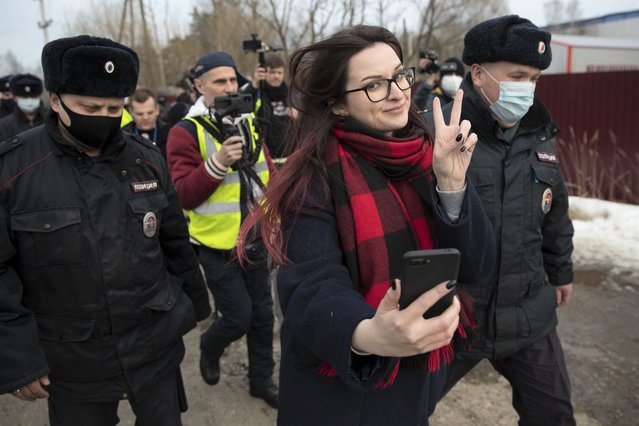 Activist Ksenia Pakhomova, foreground, takes a selfie as police officers detain her at the prison colony IK-2, which stands out among Russian penitentiary facilities for its particularly strict regime, in Pokrov in the Vladimir region, 85 kilometers (53 miles) east of Moscow, Russia, Tuesday, April 6, 2021. (Photo by Pavel Golovkin/AP Photo) 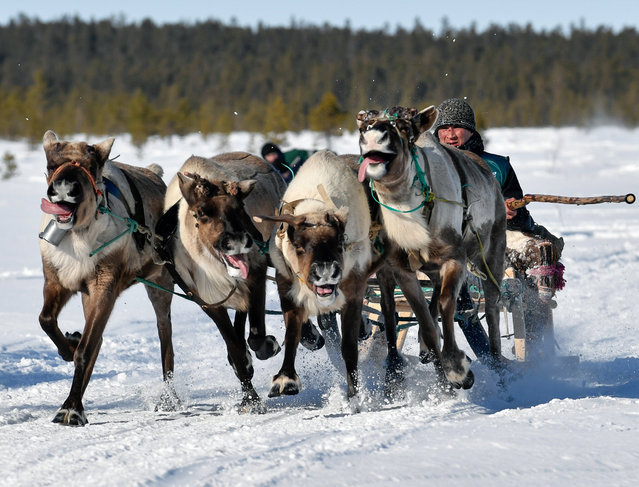 A man competes in a reindeer sled race during a celebration marking the centenary of the village of Krasnoshchelye on the Ponoi River in the centre of the Kola Peninsula, in Arctic Russia, Murmansk Region on March 28, 2021. The village is one of the most remote residential areas in the Murmansk Region. It can only be reached by helicopter. (Photo by Lev Fedoseyev/TASS) 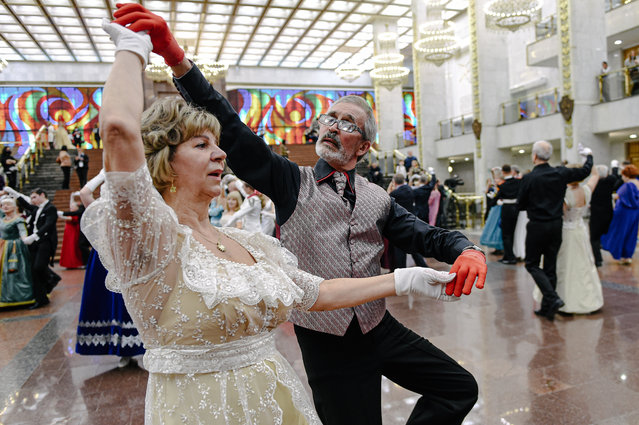 Participants dance at the Spring Ball in the Victory Museum in Moscow, Russia, on April 3, 2021. More than 200 participants from different cities of Russia gathered here to wait for the traditional Spring Ball on Saturday. (Photo by Chine Nouvelle/SIPA Press/Rex Features/Shutterstock) 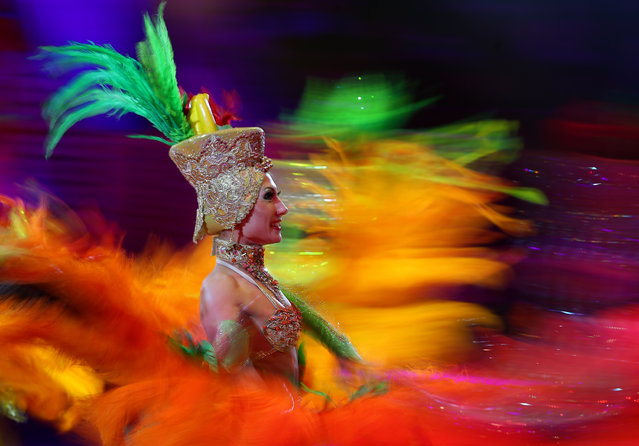 A costumed performer is seen during the Feyeriya (Extravaganza) Show at the Ivanovo State Circus in Ivanovo, Russia on April 3, 2021. On 3 April 2021, the circus resumed performances after being shutdown for a year in connection with the COVID-19 pandemic. (Photo by Vladimir Smirnov/TASS) 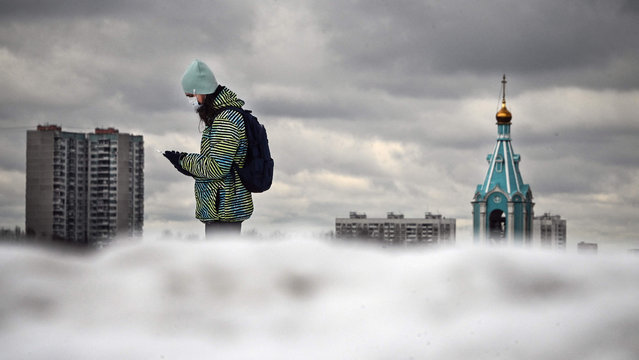 A pedestrian wears a protective face mask as he walks in western Moscow on April 3, 2021. Russia reports a decline in virus-related deaths in February on the previous month, as authorities say the worst of the pandemic has passed and aim to lift remaining curbs by the end of the summer. The figures published by the Rosstat statistics agency showed 14,171 Russians died due to the coronavirus in February, while a further 9,198 people died with the virus but primarily of other causes. (Photo by Alexander Nemenov/AFP Photo) 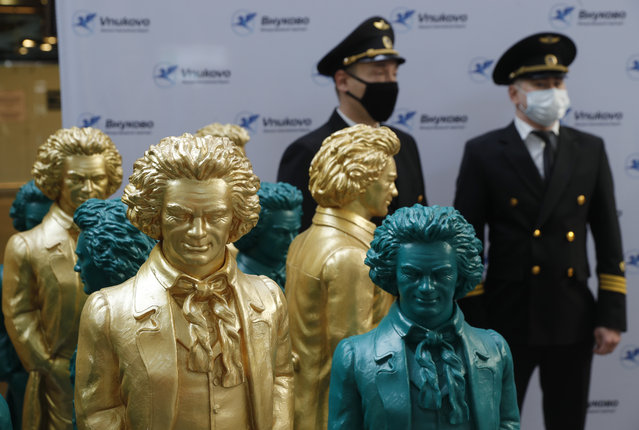 The opening ceremony for a sculpture exhibition titled Ludwig van Beethoven – the Ode to Joy at Vnukovo International Airport in Moscow, Russia on April 6, 2021. The exhibition marks Beethoven's 250th birth anniversary and is held as part of the 2020/21 Russia-Germany cross-cultural year. (Photo by Mikhail Japaridze/TASS) 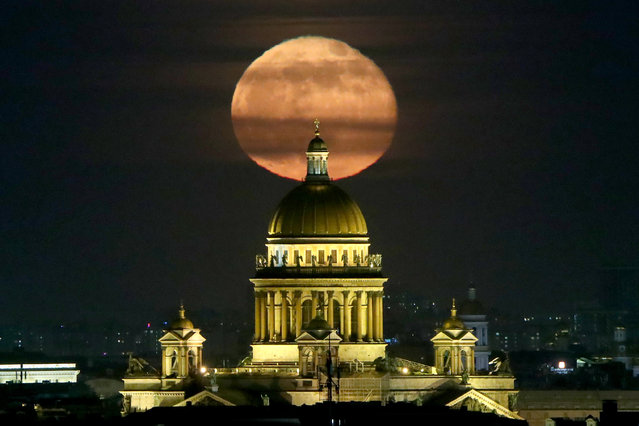 The moon is seen in the sky over St Isaac's Cathedral in St Petersburg, Russia on March 29, 2021. (Photo by Peter Kovalev/TASS) 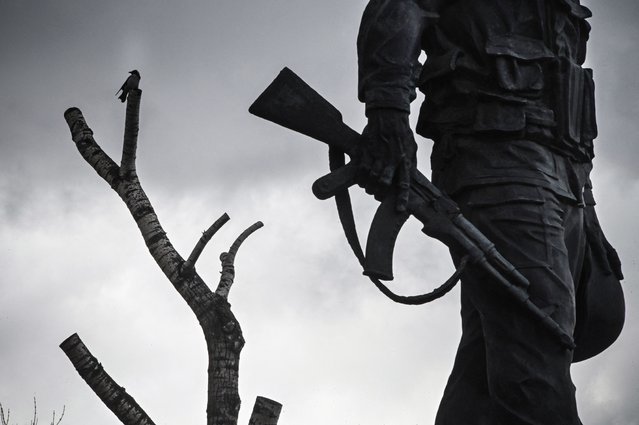 A bird sits on a tree next to a monument to Soviet soldiers killed in action in Afghanistan during Soviet invasion of 1979-1989 at Moscow's Poklonnaya Hill War Memorial Park on April 2, 2021. For the decade a total of 620,000 Soviet soldiers served with the forces in Afghanistan. The total irrecoverable personnel losses of the Soviet Armed Forces amounted about to 15,000. (Photo by Alexander Nemenov/AFP Photo) 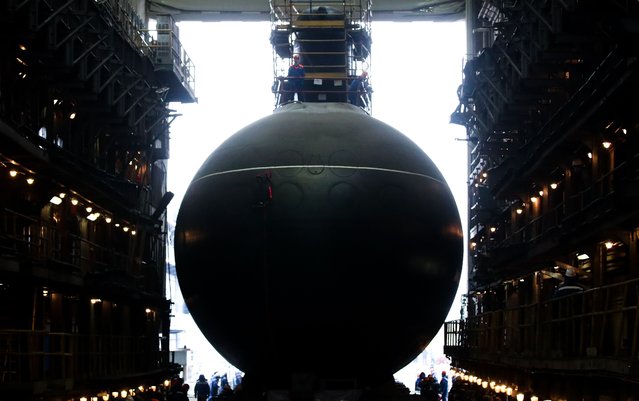 The launching ceremony for the Magadan diesel-electric submarine at Admiralty Shipyard in St Petersburg, Russia on March 26, 2021. The Magadan is a Project 636.3 submarine developed by Rubin Design Bureau, which was commissioned by the Russian Navy Pacific Fleet. (Photo by Peter Kovalev/TASS) 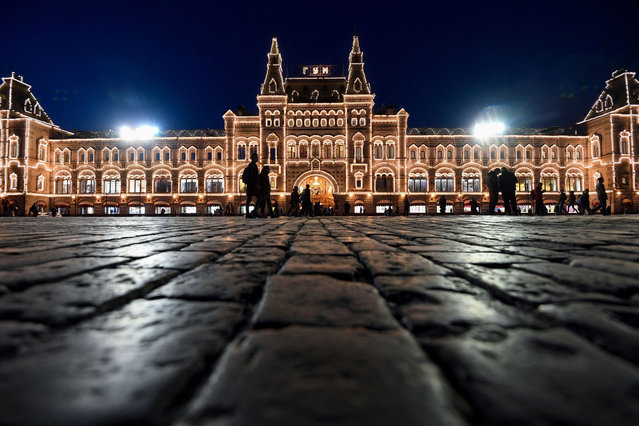 People walk on Red Square in front of the GUM department store before Earth Hour in downtown Moscow on March 27, 2021. (Photo by Natalia Kolesnikova/AFP Photo) Visitors look at a plastinated human body during the “Body Worlds” exhibition by German anatomist Gunther von Hagens at a pavilion of the Exhibition of Achievements of National Economy (VDNKh) in Moscow, Russia March 24, 2021. Head of Russian Investigative Committee Alexander Bastrykin ordered a probe of the exhibition after it sparked outrage among conservative religious groups and public figures. (Photo by Evgenia Novozhenina/Reuters) 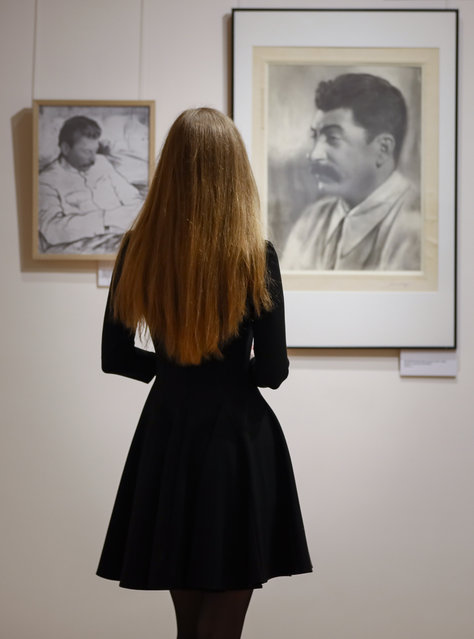 A visitor looks at portraits of Soviet leader Joseph Stalin by Soviet photographer Moses Nappelbaum during a press preview of the exhibition “Known and Unknown Nappelbaum” in Moscow, Russia 02 April 2021. More than 230 works created by Nappelbaum in different periods are presented in the exhibition based on the Nappelbaum family archive. (Photo by Yuri Kochetkov/EPA/EFE) 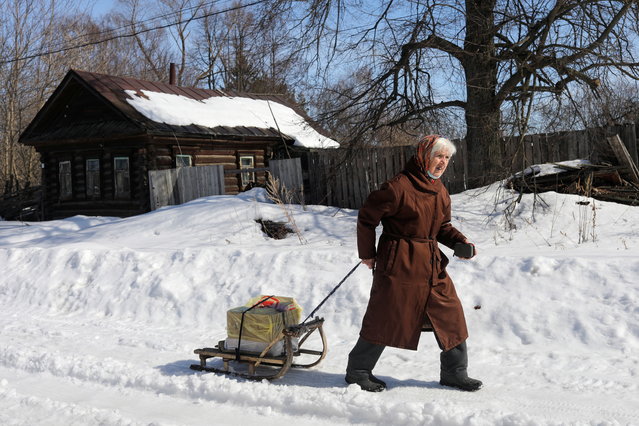 A local resident pulls foodstuffs on a sledge in the village of Kurmysh in Nizhny Novgorod Region, Russia on March 27, 2021. (Photo by Anastasia Makarycheva/Reuters) 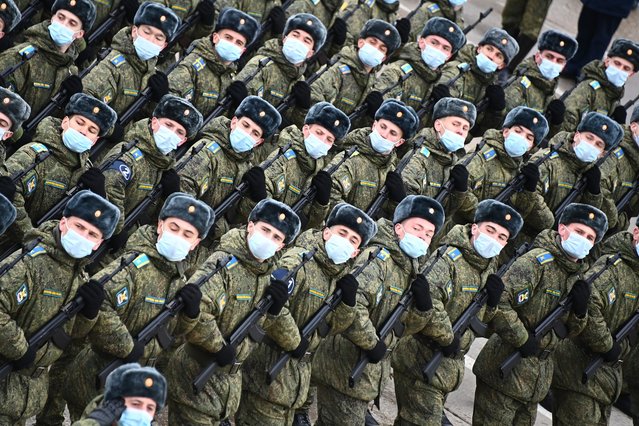 Servicemen attend a rehearsal of the annual Victory Day military parade due to mark the upcoming 76th anniversary of the victory in World War II at Alabino training grounds, Moscow region, Russia on April 5, 2021. (Photo by Evgeny Odinokov/Sputnik/Profimedia) 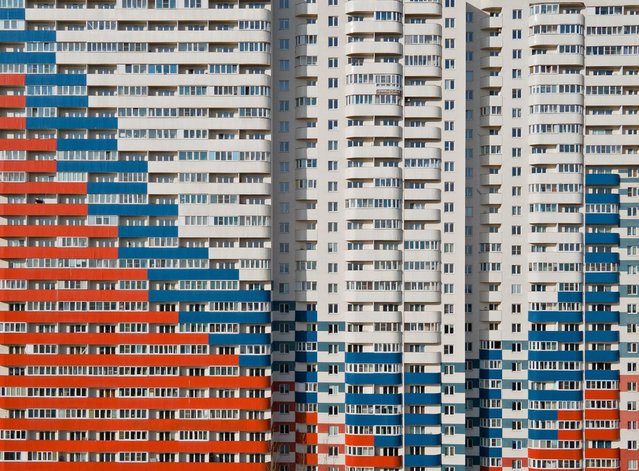 A view shows an apartment block with a facade, depicting the colours of the Russian state flag in Saint Petersburg, Russia on April 4, 2021. Picture taken with a drone. (Photo by Anton Vaganov/Reuters) 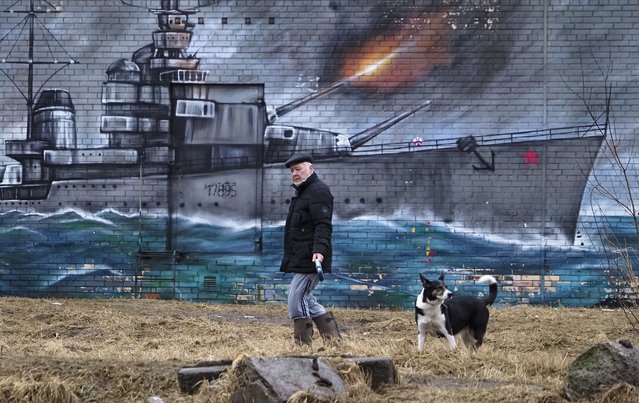 A man walks with his dog past a graffiti on the wall of a building depicting a World War II era Soviet warship in St. Petersburg, Russia, Tuesday, March 30, 2021. (Photo by Dmitri Lovetsky/AP Photo) 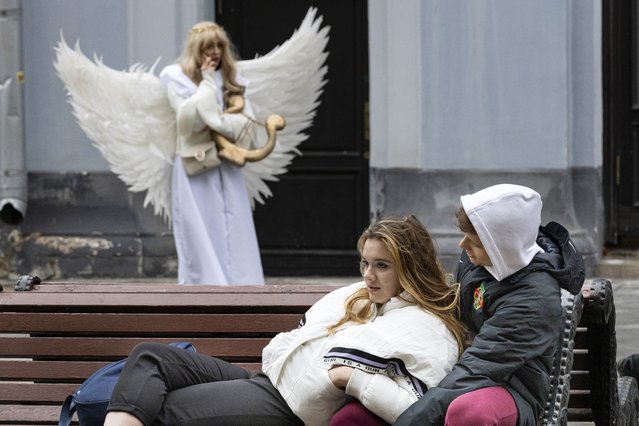