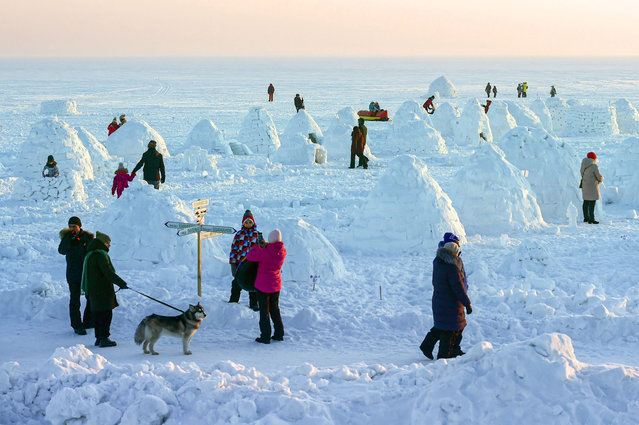 Participants of the Igloo festival “City of the Eskimos” on the ice of the Novosibirsk reservoir near the beach “Boomerang” on February 12, 2022. (Photo by Kommersant Photo Agency/Rex Features/Shutterstock) 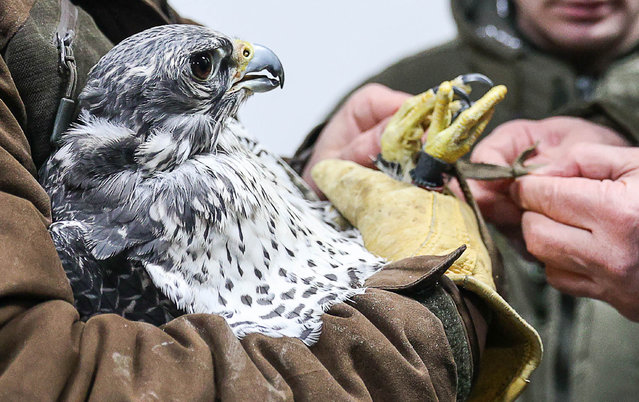 A gyrfalcon delivered with the first batch of birds from Germany at the Kamchatka falcon breeding center in Petropavlovsk-Kamchatsky, Russia on February 11, 2022. The International Center for the Reintroduction and Conservation of Rare Species of Birds of Prey has received 83 birds as a breeding stock to expand the population of the Kamchatka gyrfalcons, listed as an endangered species. The first generation of nestlings is expected to be bred at the center the upcoming spring. (Photo by Yelena Vereshchaka/TASS) 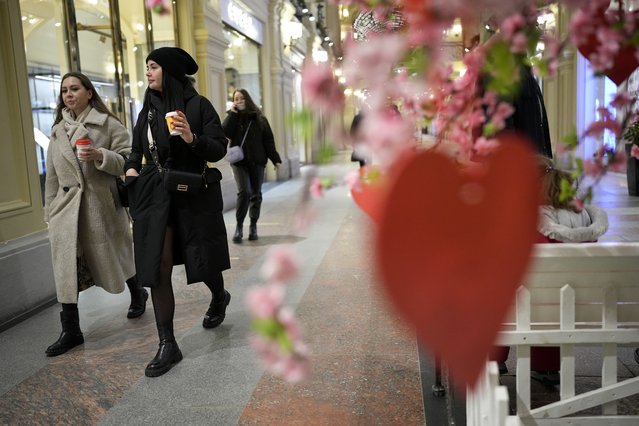 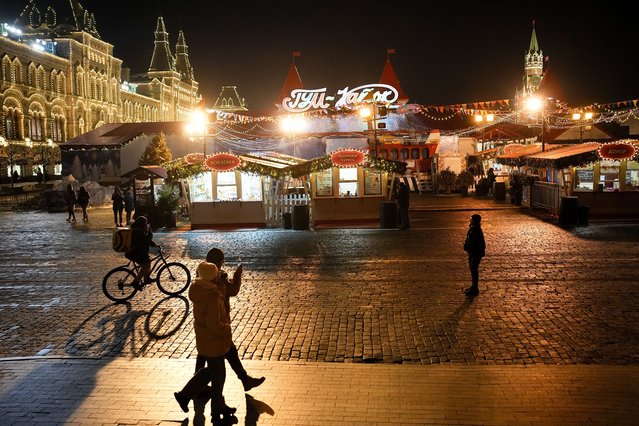 People walk next to a Christmas Market set up in Red Square in front of the GUM department store in Moscow, Russia, late Monday, February 14, 2022. (Photo by Alexander Zemlianichenko/AP Photo) 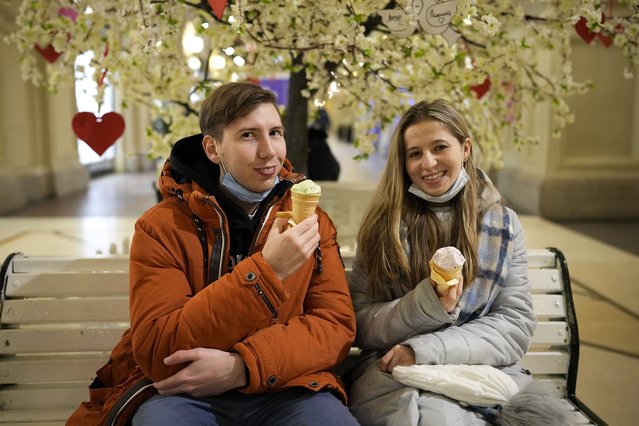 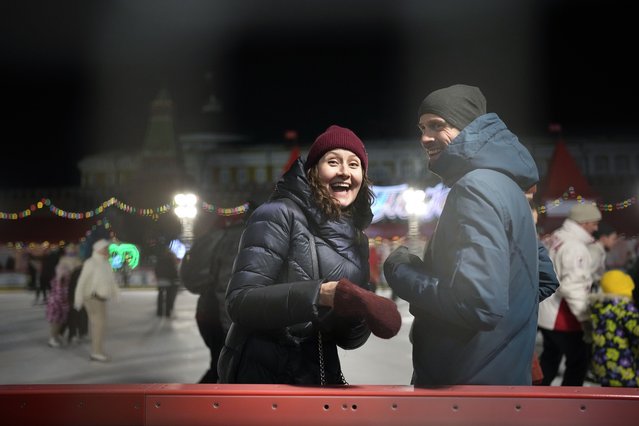 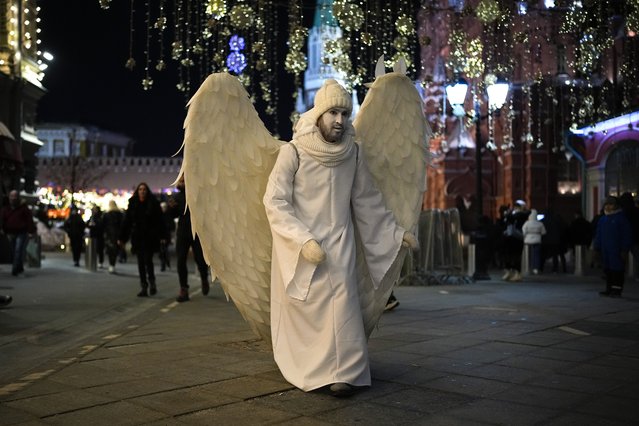 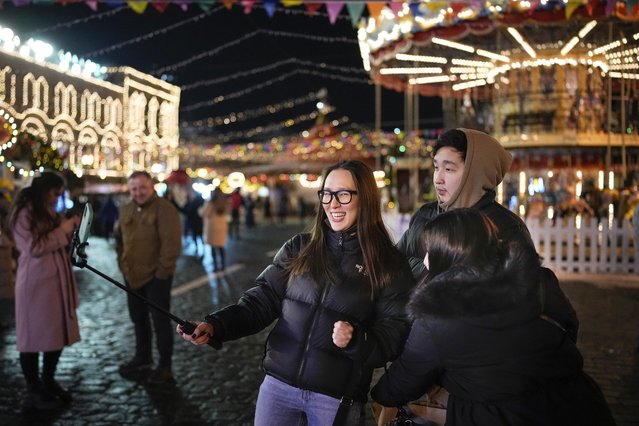 Visitors make a selfie as they walk in Red Square in Moscow, Russia, Monday, February 14, 2022. (Photo by Alexander Zemlianichenko/AP Photo) 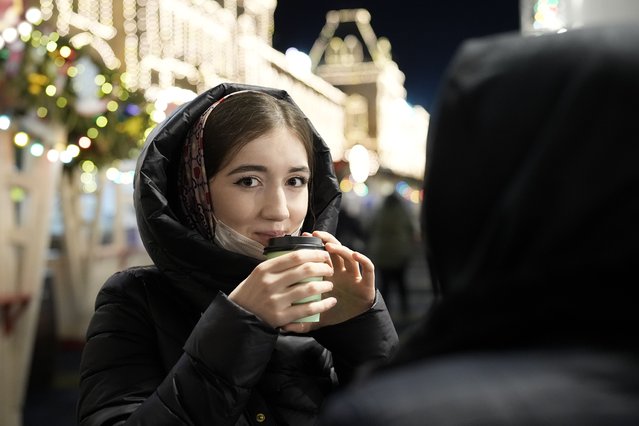 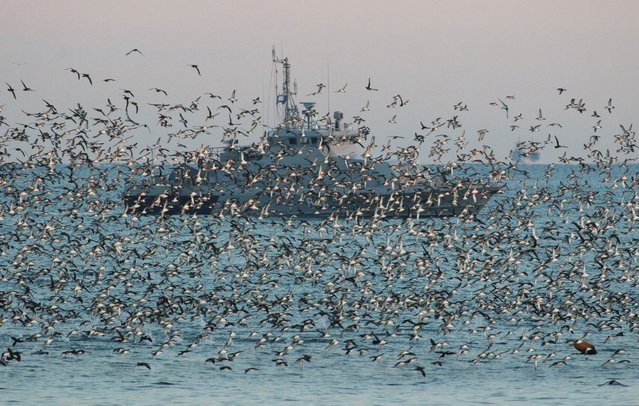 A vessel of the Russian Navy is seen through a flock of birds in the Black Sea port of Sevastopol, Crimea on February 16, 2022. (Photo by Alexey Pavlishak/Reuters) 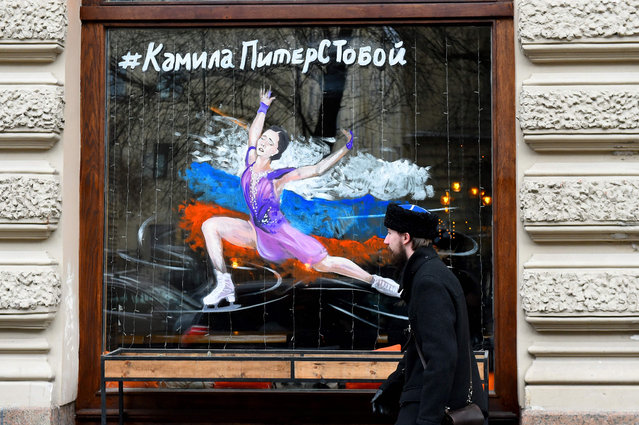 A man walks past a restaurant window with a painting bearing Russia's figure skater Kamila Valieva and reading “Kamila, Petersburg is with you!” in Saint Petersburg on February 16, 2022. Teenage Russian figure skater Kamila Valieva will go for a second Beijing Olympics title on February 17, 2022 the next chapter in a damaging doping scandal which has overshadowed the Games. (Photo by Olga Maltseva/AFP Photo) 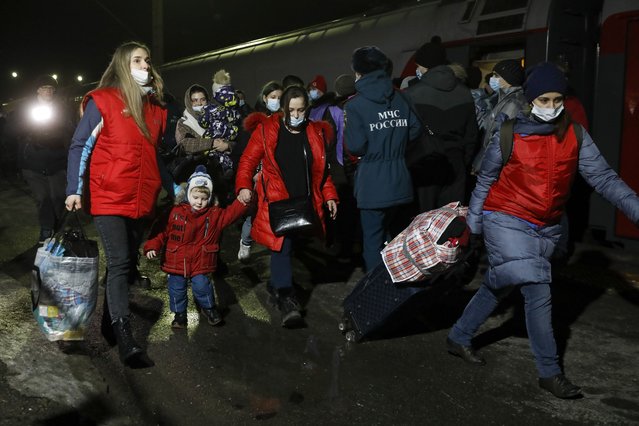 People from the Donetsk and Luhansk regions, the territory controlled by a pro-Russia separatist governments in eastern Ukraine, walk from a train to be taken to temporary residences in the Volgograd region, at the railway station in Volzhsky, Volgograd region, Russia, on Sunday, February 20, 2022. Ukrainian President Volodymyr Zelenskyy, facing a sharp spike in violence in and around territory held by Russia-backed rebels and increasingly dire warnings that Russia plans to invade, has called for Russian President Vladimir Putin to meet him and seek a resolution to the crisis. (Photo by Alexandr Kulikov/AP Photo) 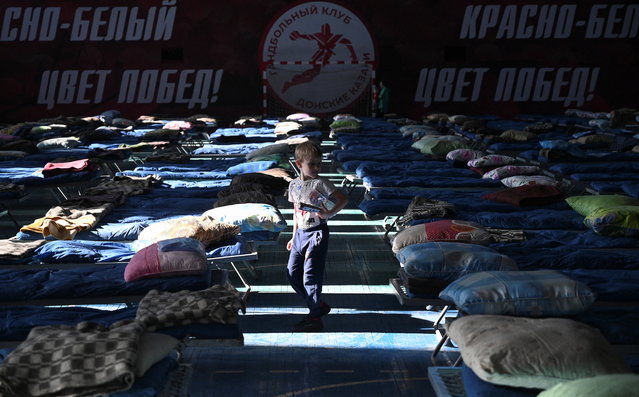 A view shows a temporary accommodation centre for evacuees from the separatist-controlled regions of eastern Ukraine, which is located at a local sports school in the city of Taganrog in the Rostov region, Russia on February 21, 2022. (Photo by Sergey Pivovarov/Reuters) 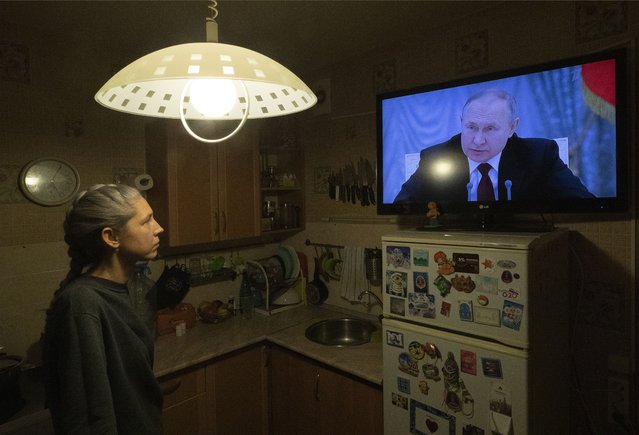 A woman watches TV with Russian President Putin speaking during a broadcast of a meeting of the National Security Council on the recognition of the self-proclaimed Donetsk People's Republic (DPR) and the Luhansk People's Republic (LPR), in St. Petersburg, Russia, 21 February 2022. Putin said he was considering a request from leaders of the two self-proclaimed republics to recognise them as independent states, less than a week after the Duma on 15 February voted to appeal to President Putin to recognise the two Donbas regions. The regions declared independence in 2014 amid an armed conflict in the eastern Ukraine. (Photo by Anatoly Maltsev/EPA/EFE) 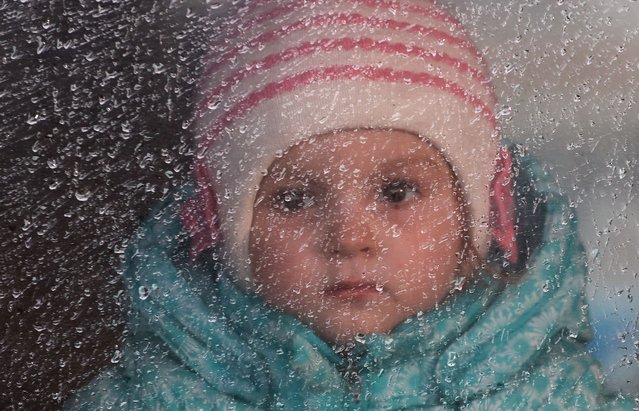 A child passenger looks on as a Donbass evacuation train arrives at Aprelevka railway station, Naro-Fominsk Municipality, west of Moscow on February 22, 2022. As tension escalated in east Ukraine on February 18, the leaders of the Donetsk and Lugansk People's Republics announced a mass evacuation of civilians to Russia, with a general mobilisation they ordered the following day. Forty-three Russian regions have come forward to accommodate people evacuated from Donbass. (Photo by Sergei Karpukhin/TASS) Russian President Vladimir Putin, center right, attends a wreath-laying ceremony at the Tomb of the Unknown Soldier, near the Kremlin Wall during the national celebrations of the “Defender of the Fatherland Day” in Moscow, Russia, Wednesday, February 23, 2022. The Defenders of the Fatherland Day, celebrated in Russia on Feb. 23, honors the nation's military and is a nationwide holiday. (Photo by Alexei Nikolsky, Kremlin Pool Photo via AP Photo) 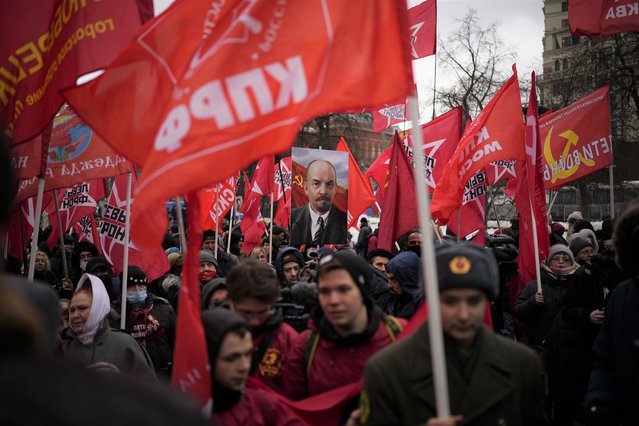 Communists' party supporters with red flags and a portrait of Soviet Founder Vladimir Lenin, center, attend the national celebrations of the 'Defender of the Fatherland Day' near the Kremlin in the Revolution Square in Moscow, Russia, Wednesday, February 23, 2022. The Defenders of the Fatherland Day, celebrated in Russia on February 23, honors the nation's military and is a nationwide holiday. (Photo by Alexander Zemlianichenko/AP Photo) 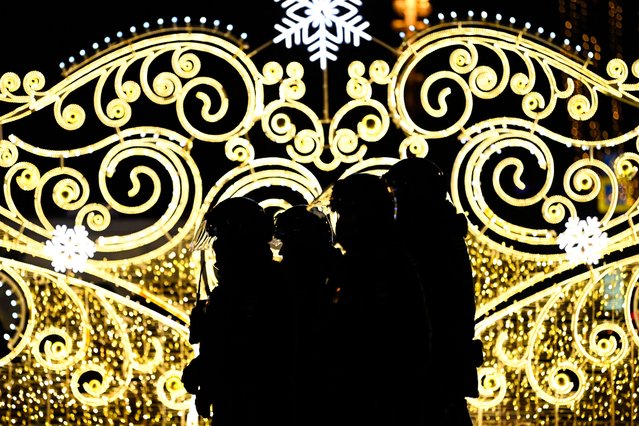 Police officers are seen deployed in the streets during a protest against Russia's invasion of Ukraine in Moscow on February 24, 2022. Russian President Vladimir Putin launched a full-scale invasion of Ukraine on Thursday, killing dozens and triggering warnings from Western leaders of unprecedented sanctions. Russian air strikes hit military installations across the country and ground forces moved in from the north, south and east, forcing many Ukrainians flee their homes to the sounds of bombing. (Photo by Kirill Kudryavtsev/AFP Photo) 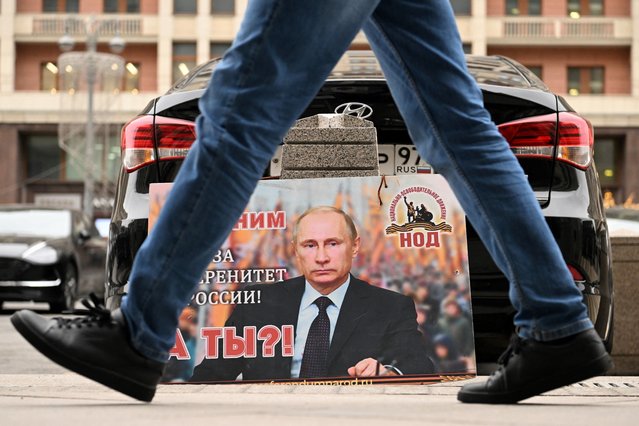 A placard featuring an image of Russian President Vladimir Putin and reading “We are with him for the sovereignty of Russia! And you?” is seen left in front of the Russian State Duma building in central Moscow on February 24, 2022. (Photo by Kirill Kudryavtsev/AFP Photo) 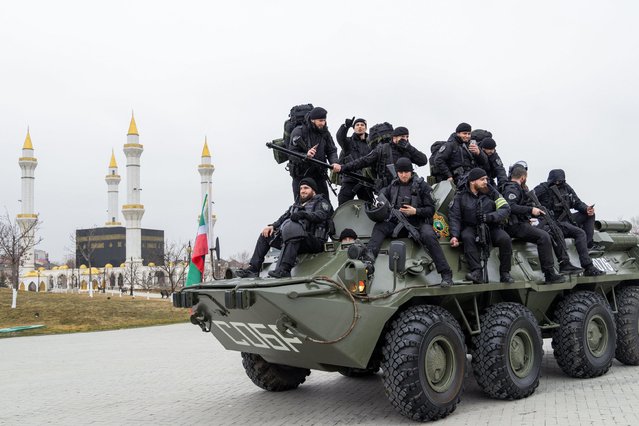 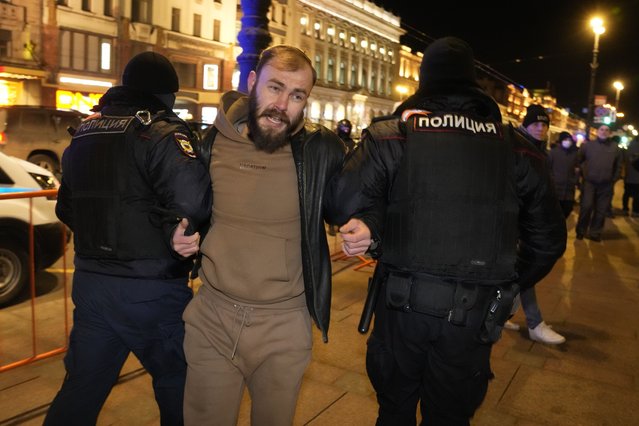 Police detain a demonstrator during an action against Russia's attack on Ukraine in St. Petersburg, Russia, Saturday, February 26, 2022. Protests against the Russian invasion of Ukraine resumed on Saturday evening, with people taking to the streets of Moscow and St. Petersburg for the third straight day despite mass arrests. OVD-Info rights group reported that at least 325 people were detained in 26 Russian cities on Saturday in antiwar protests, nearly half of them in Moscow. (Photo by Dmitri Lovetsky/AP Photo)
Edit Del
01 Mar 2022 06:52:00, post received 0 comments
Publication archive:
←   →
Popular tags:
All tags
Last searches: