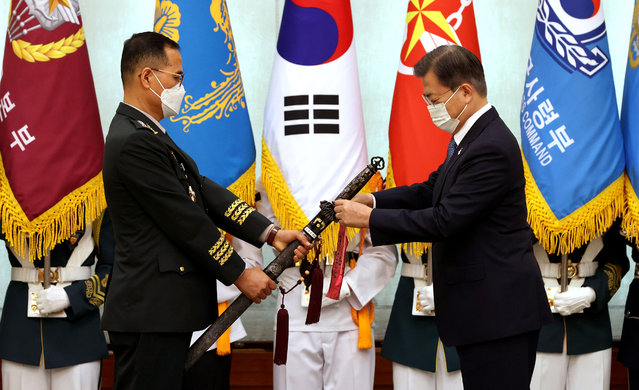 South Korea's President Moon Jae-in (R) ties a tassel onto the sword of Gen. Nam Yeong-shin, new Army Chief of Staff, during his inauguration ceremony at the presidential office Cheong Wa Dae in Seoul, South Korea, 23 September 2020. The traditional Korean sword, Sam Jeong Geom, or the Three Spirits Sword, represents the defense of the country, unification and prosperity, as well as the Army, Navy and Air Force. The tassel bears the recipient's post, inauguration date and the president's name in Korean. (Photo by Yonhap/EPA/EFE/Rex Features/Shutterstock) 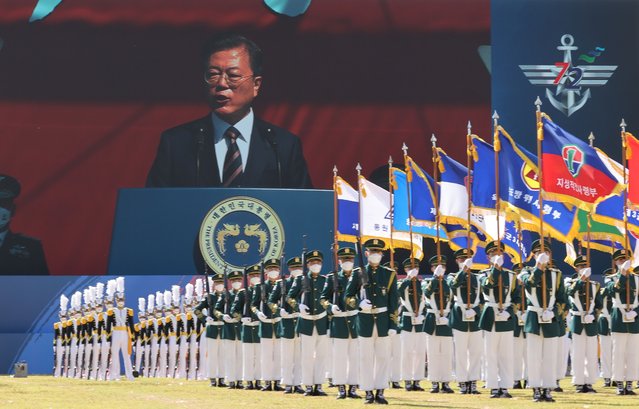 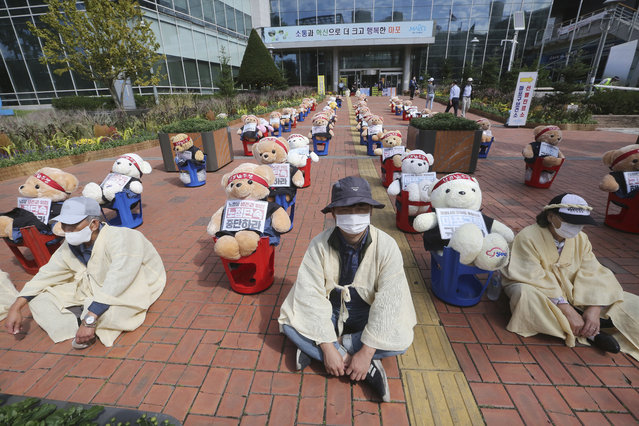 Street vendors sit to protest against a crackdown on illegal street vendors, in front of the Mapo ward office in Seoul, South Korea, Thursday, September 24, 2020. They replaced protestors with teddy bears to avoid the violation of an ongoing ban on rallies with more than 10 people amid the coronavirus pandemic. The signs read: “Stop crackdown”. (Photo by Ahn Young-joon/AP Photo) 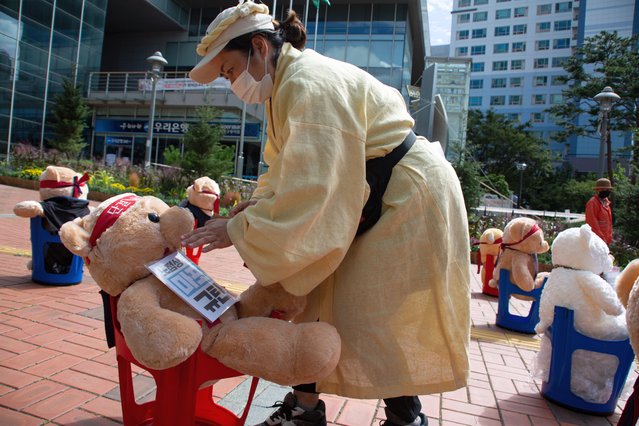 A member of the South Korean Confederation of Trade Unions (KCTU) wearing clothing associated with mourning takes part in a protest against government's labor policy, which uses dolls to mimic a labor strike portest, amid the COVID-19 pandemic lockdown in Seoul, South Korea, 24 September 2020. Seoul city government announced on 21 August an order that prohibits gatherings of more than ten people, as a precaution against the coronavirus pandemic. (Photo by Jeon Heon-Kyun/EPA/EFE) 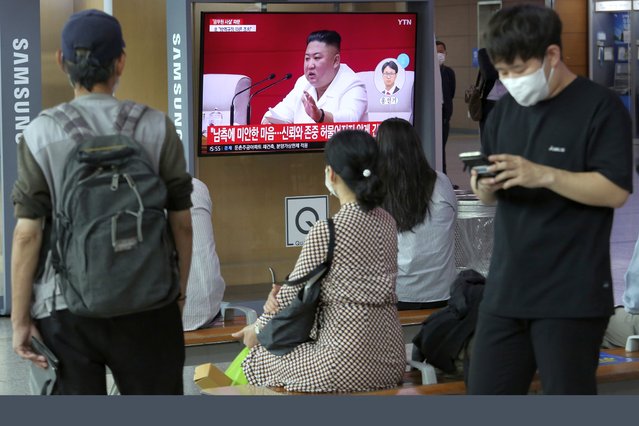 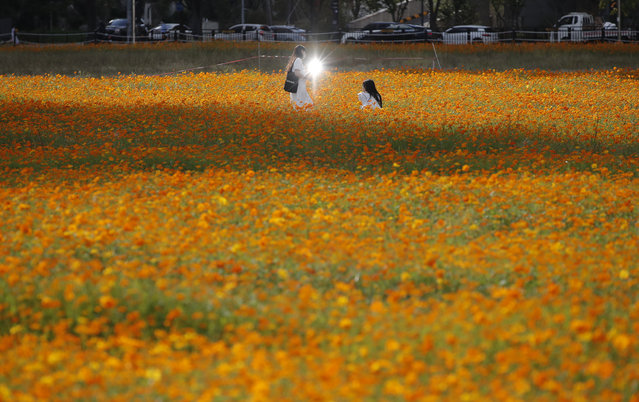 The sun is reflected on visitor's smartphone while they trying to take pictures in a field of Cosmos flowers in Goyang, South Korea, Friday, September 18, 2020. (Photo by Lee Jin-man/AP Photo) 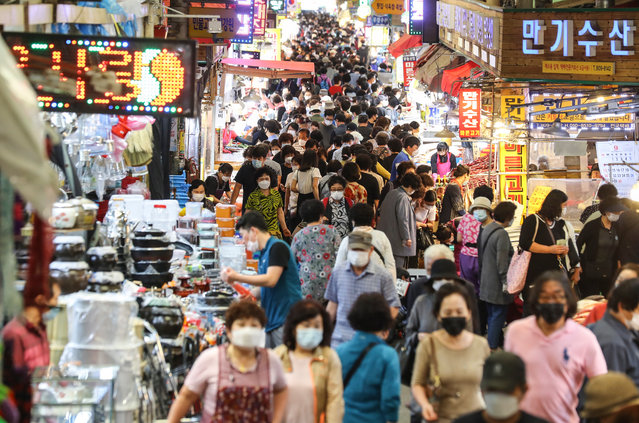 Bujeon Market in Busan is crowded with people ahead of Chuseok, one of the country's two biggest traditional holidays in Busan, South Korea, 18 September 2020. The holiday falls on 01 October this year. (Photo by Yonhap/EPA/EFE) 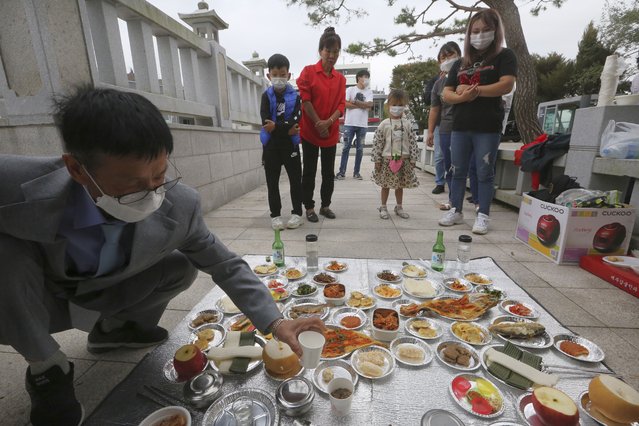 North Korean defector Han Hong-geun, left, and his family members pay respect to their ancestors in North Korea to celebrate the Chuseok, the Korean version of Thanksgiving Day, at Imjingak Pavilion in Paju, near the border with North Korea, South Korea, Thursday, October 1, 2020. The government has discouraged people from visiting their hometowns for the Chuseok holiday amid concerns about the spread of the coronavirus. (Photo by Ahn Young-joon/AP Photo) 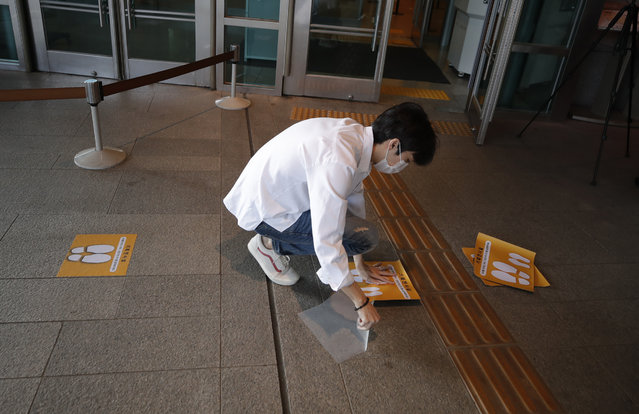 A man wearing a face mask attaches social distancing signs on the floor at the National Museum of Korea in Seoul, South Korea, Monday, September 28, 2020. The museum reopened Monday after having been closed for six weeks as a precaution against the coronavirus. (Photo by Lee Jin-man/AP Photo) 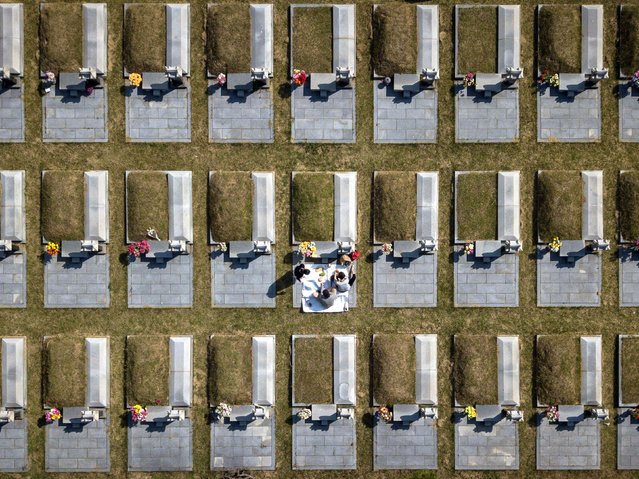 In a photo taken on September 26, 2020, a family sit before a grave at a cemetery in Incheon where the the local government was encouraging people to visit cemeteries before the annual Chuseok festival in order to avoid large gatherings as part of COVID-19 coronavirus precautions. The Chuseok festival, which runs from September 30 to October 2, is traditionally a time for family gatherings and ancestral rituals, but this year it will be starkly different with authorities urging the public to stay home instead to help contain the spread of the COVID-19 coronavirus. (Photo by Ed Jones/AFP Photo) 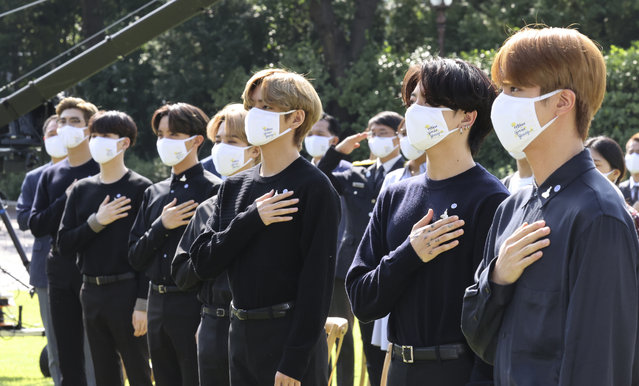 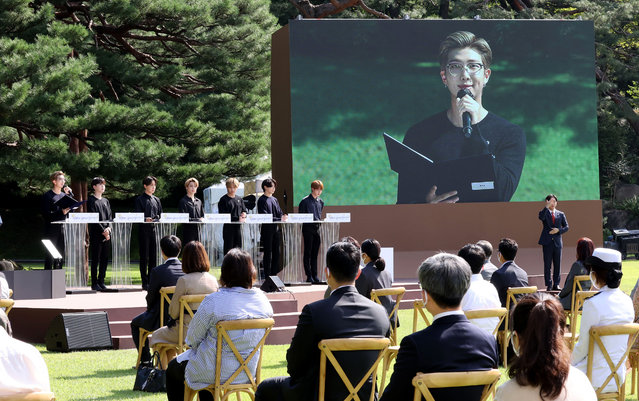 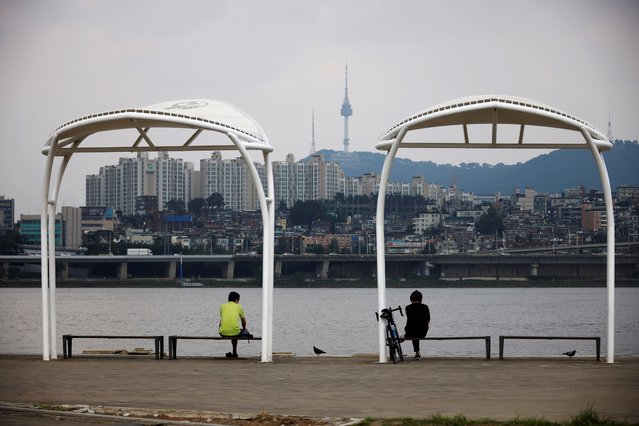 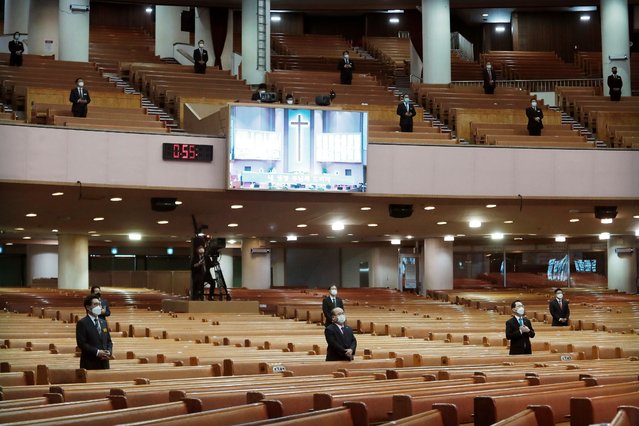 Pastors wearing face masks to help protect against the spread of the coronavirus pray during a service at the Yoido Full Gospel Church in Seoul, South Korea, Sunday, September 20, 2020. South Korea's new coronavirus tally has fallen below 100 for the first time in more than a month. (Photo by Ahn Young-joon/AP Photo) 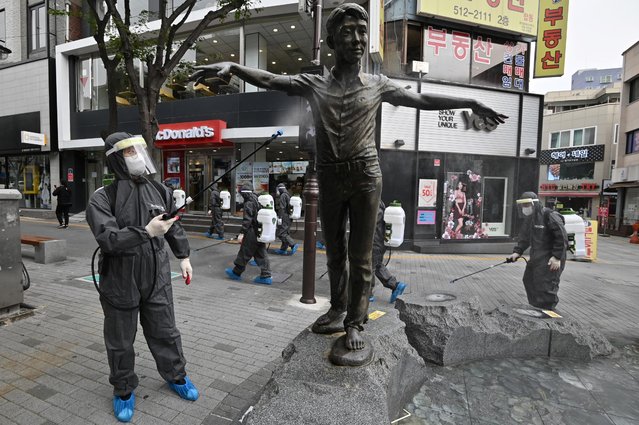 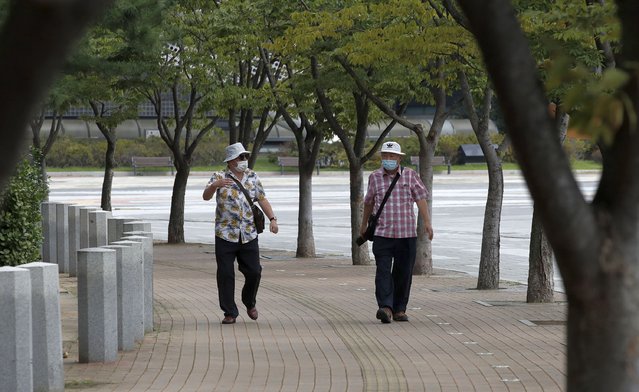 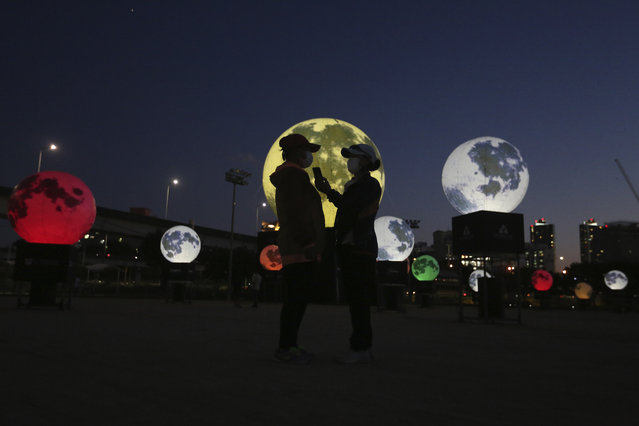 Women stand next to glowing full moon installations at a park in Seoul, South Korea, Friday, September 18, 2020. The artificial full moons have been installed by a local officials to increase morale during the COVID-19 outbreak and to celebrate the upcoming Chuseok holiday, the Korean version of Thanksgiving Day. (Photo by Ahn Young-joon/AP Photo) 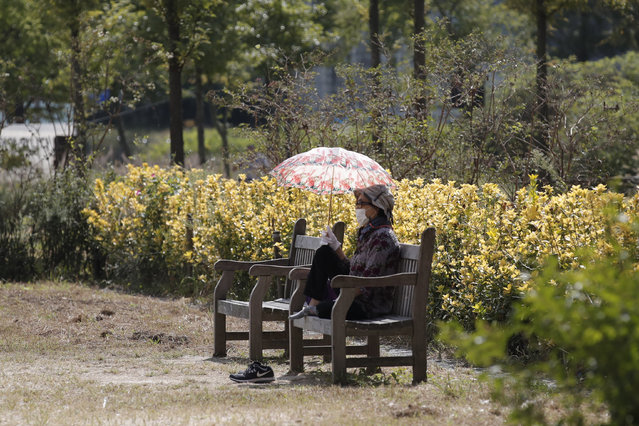 A woman wearing a face mask to help protect against the spread of the coronavirus, sits on a bench while maintaining social distancing at a park in Seoul, South Korea, Monday, September 21, 2020. South Korea’s daily virus tally has stayed below 100 for a second consecutive day, maintaining a slowing trend in fresh infections. (Photo by Lee Jin-man/AP Photo) 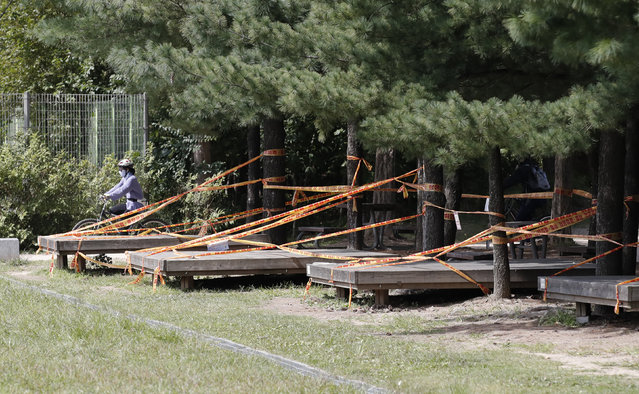 Campsites are sealed off for the social distancing measures as a precaution against the coronavirus in Seoul, South Korea, Thursday, September 24, 2020. (Photo by Lee Jin-man/AP Photo) 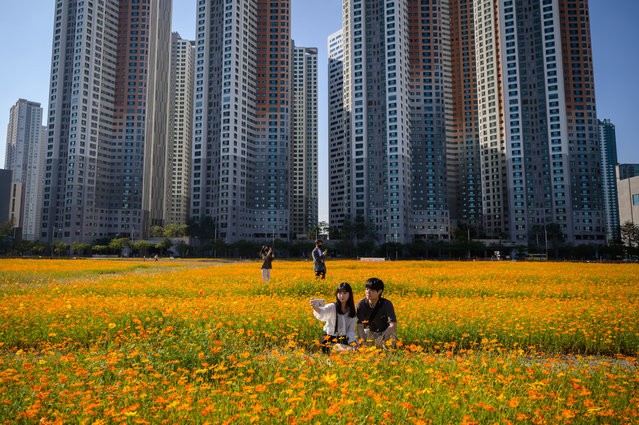