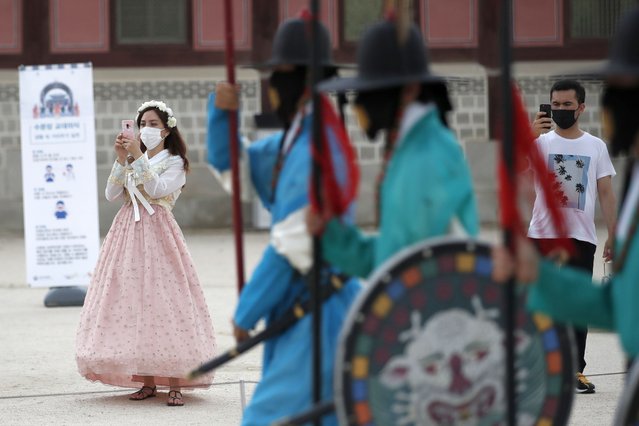 Visitors hold their smartphones while maintaining social distancing during a re-enactment ceremony of the changing of the Royal Guard at the Gyeongbok Palace, one of South Korea's well-known landmarks, in Seoul, South Korea, Friday, July 31, 2020. South Korea's newest coronavirus cases were mostly tied to international arrivals. (Photo by Lee Jin-man/AP Photo) 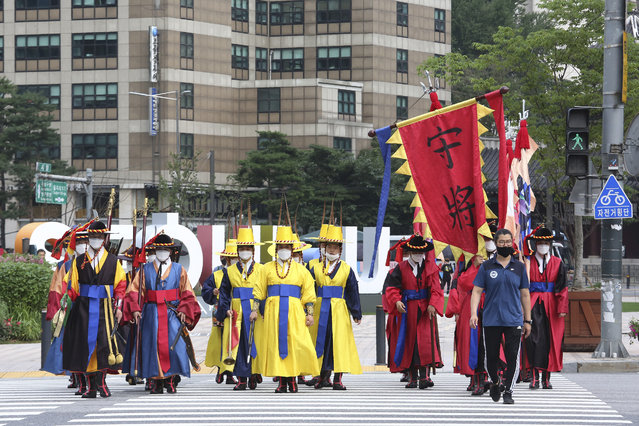 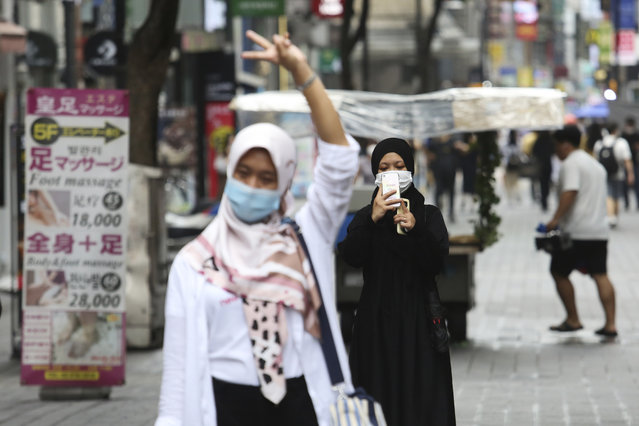 A woman wearing a face mask to help protect against the spread of the coronavirus takes photos of her friend at a shopping street in Seoul, South Korea, Wednesday, August 5, 2020. (Photo by Ahn Young-joon/AP Photo) 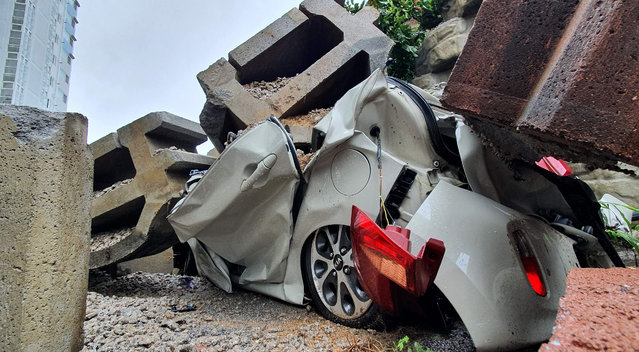 In a photo taken on August 3, 2020 a car lies crushed beneath concrete blocks from a retaining wall damaged by heavy rain in Cheorwon. Damage from heavy rain that pounded the country's central region earlier this week continued to grow, leaving 13 dead and 13 missing as of August 4, the Yonhap news agency reported. (Photo by Yonhap/AFP Photo) 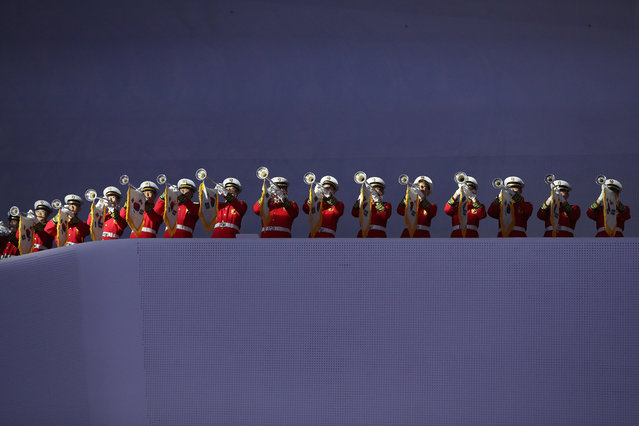 South Korean military band play their instruments during a ceremony of UN Forces Participation Day event marking the 67th Anniversary of the Korean War armistice agreement on July 27, 2020 in Seoul, South Korea. On June 25, 1950, soldiers of the North Korean army breached the 38th parallel invading the Republic of South Korea, marking the beginning of the Korean War. On July 27 1953, a signed armistice agreement brought the three-year conflict to an end. (Photo by Chung Sung-Jun/Getty Images) 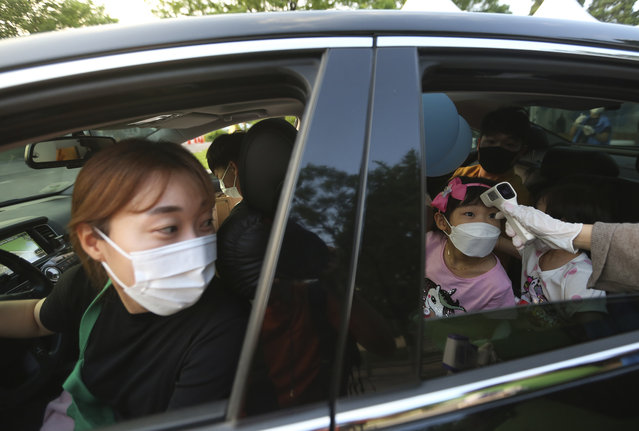 A young girl has her temperature checked as she arrives to watch a drive-in concert at the Gyeongbok Palace parking lot in Seoul, South Korea, Friday, July 17, 2020. The concert's aim is to provide entertainment for people during the coronavirus outbreak. (Photo by Ahn Young-joon/AP Photo) 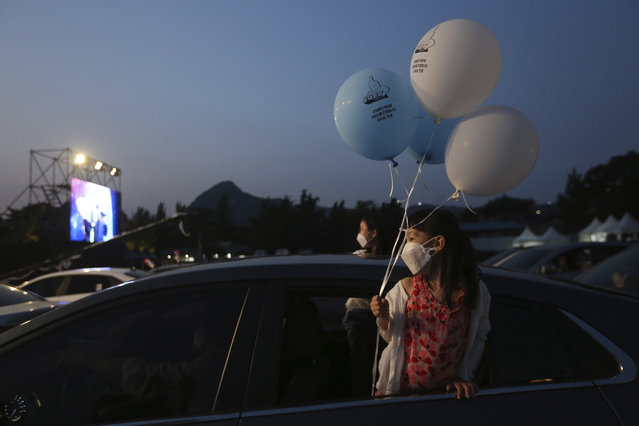 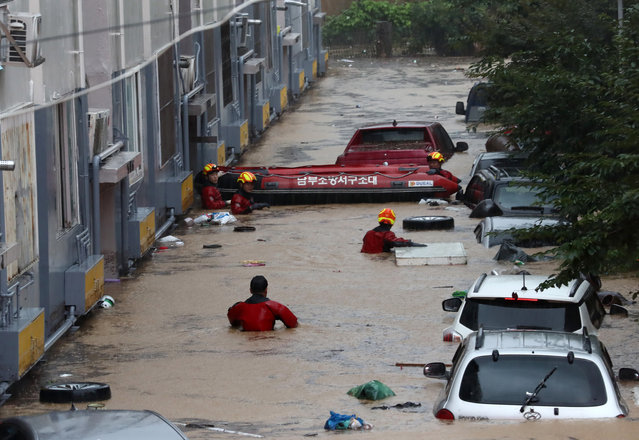 Rescue workers search near vehicles in a parking lot and lower sections of apartment buildings flooded due to heavy rain in Daejeon on July 30, 2020. (Photo by Yonhap/AFP Photo) 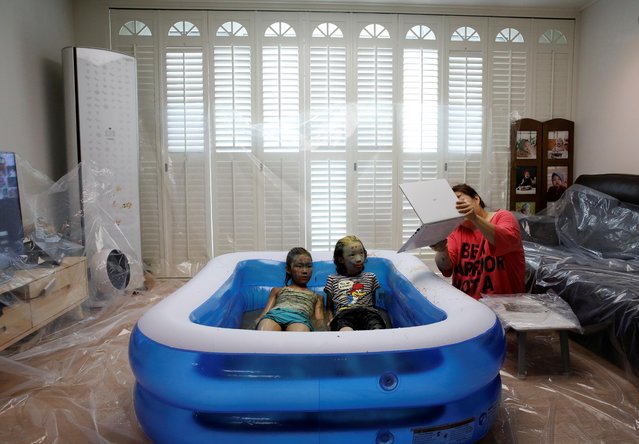 Children play in a mud pool during the Online Boryeong Mud Festival at their home during a live streaming event, in Gwangju, Gyeonggi-do, South Korea, July 18, 2020. (Photo by Heo Ran/Reuters) 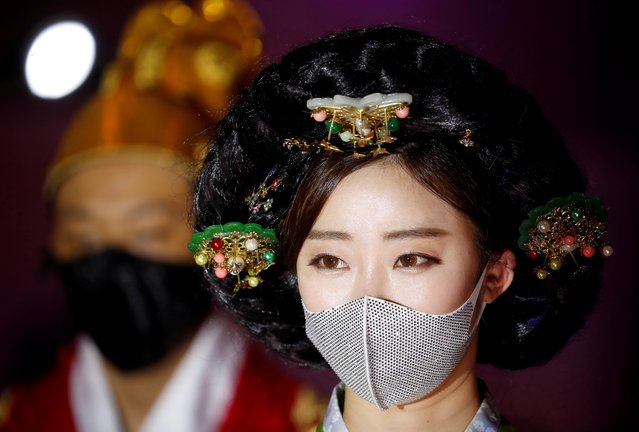 Models present creations during a fashion show, wearing masks as a measure to avoid the spread of the coronavirus disease (COVID-19), in Seoul, South Korea on July 24, 2020. (Photo by Kim Hong-Ji/Reuters) 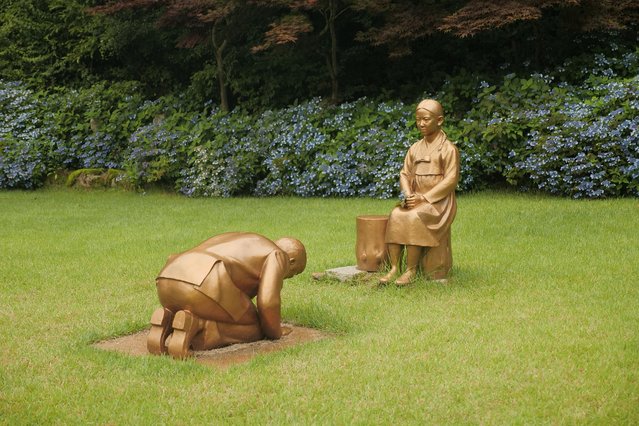 A statue symbolizing Japanese Prime Minister Shinzo Abe taking a deep bow to a “comfort woman” is pictured at Korea Botanic Garden in Pyeongchang, South Korea, July 28, 2020. The Japanese government reacted angrily to the statue that appears to depict Abe kneeling and bowing to a seated “comfort woman”, a euphemism for women forced to work in Japan's wartime brothels. (Photo by Daewoung Kim/Reuters) 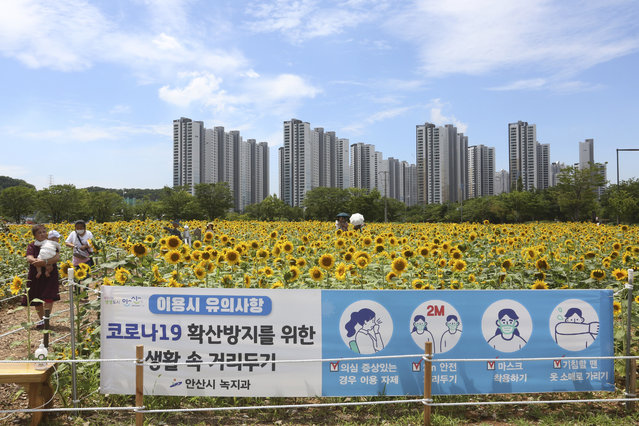 A banner about precautions against new coronavirus is shown in a field of sunflowers at a park in Ansan, South Korea, Wednesday, July 15, 2020. The signs read: “Keep distance in your life to prevent Corona 19”. (Photo by Ahn Young-joon/AP Photo) 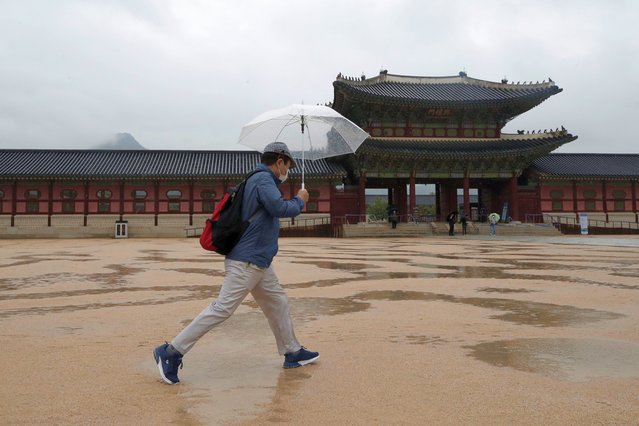 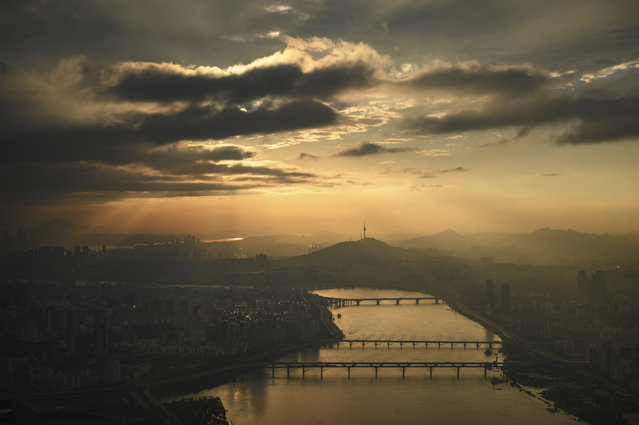 A general view shows the Seoul city skyline during sunset from the top of the Lotte World Tower on August 7, 2020. A Lotte promotional event entitled “Summerest 2020” is offering shoppers who spend over 100,000 won (80 US dollars) at Lotte World Mall the chance to apply to spend the night at a height of 555-metres atop the Lotte Tower, which with 123 floors, is Seoul's tallest building. (Photo by Ed Jones/AFP Photo) 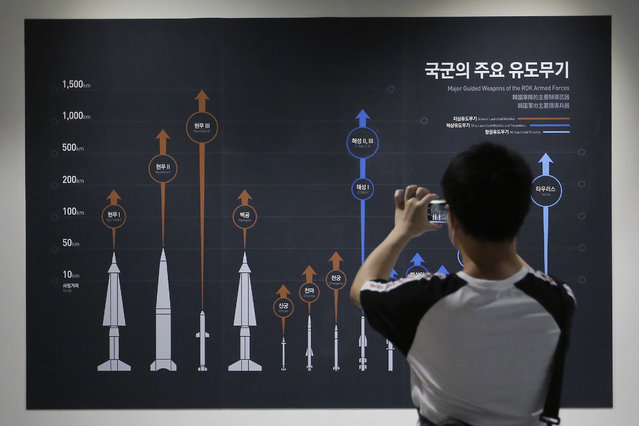 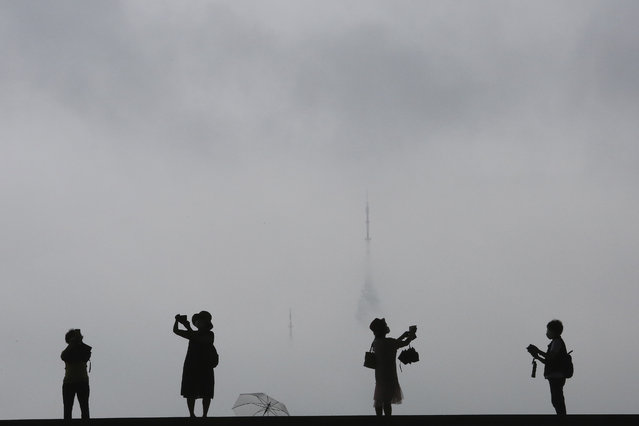 Visitors wearing face masks take pictures at the National Museum of Korea in Seoul, South Korea, Wednesday, July 22, 2020. The museum reopened Wednesday after having been closed for two months due to new coronavirus concerns. (Photo by Ahn Young-joon/AP Photo) 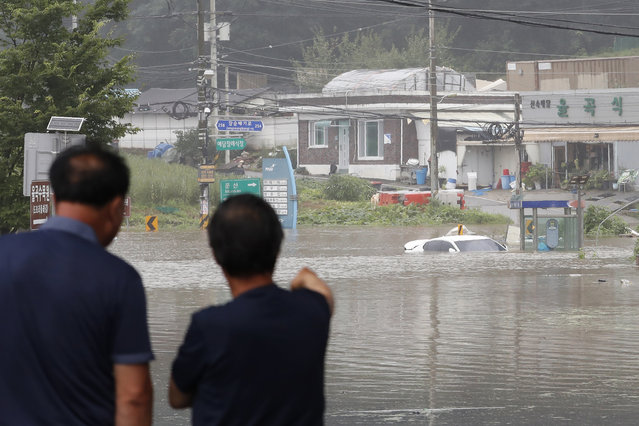 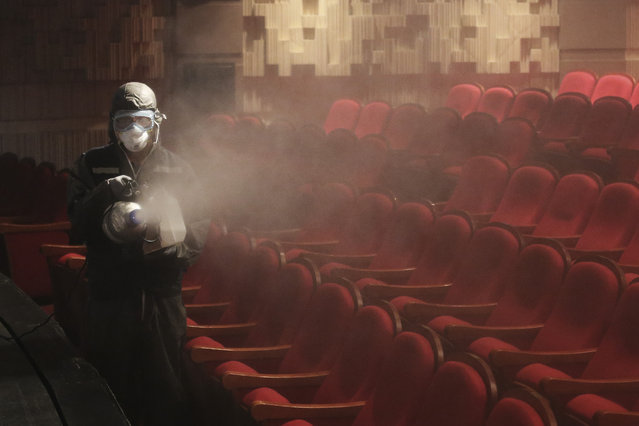 A worker wearing a protective gear sprays disinfectant as a precaution against a new coronavirus at a theater in Sejong Center in Seoul, South Korea, Tuesday, July 21, 2020. South Korea’s new virus cases have bounced back Tuesday, a day after it reported its smallest daily jump in local COVID-19 transmissions in two months. (Photo by Ahn Young-joon/AP Photo) 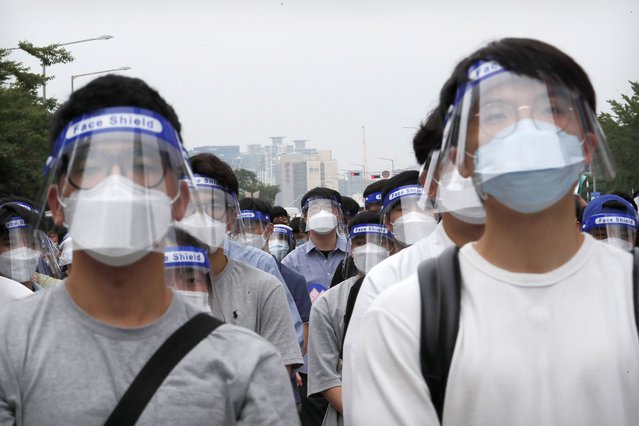 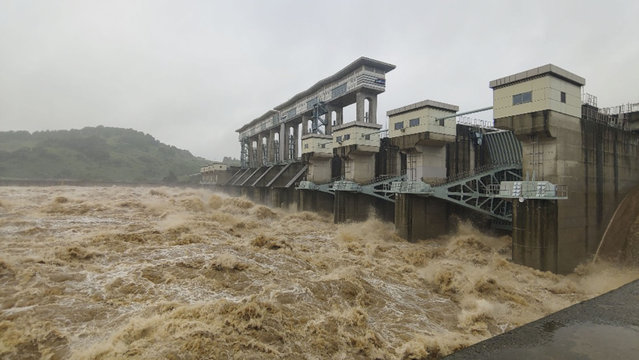 Water gushes out of the floodgates of the Gunnam Dam on the Imjin River that runs across the inter-Korean border in the South Korean border town of Yeoncheon, north of Seoul, on August 6, 2020. The state-run Korea Water Resources Corp. opened all of the dam's 13 floodgates to lower the water level after the region received heavy rain. The dam, opened in 2010, was designed to deal with flash floods from North Korea. (Photo by Ryu Seung-Il/ZUMA Wire/Rex Features/Shutterstock) 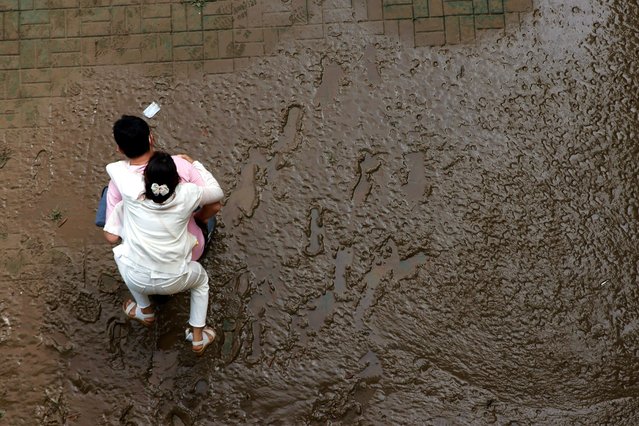