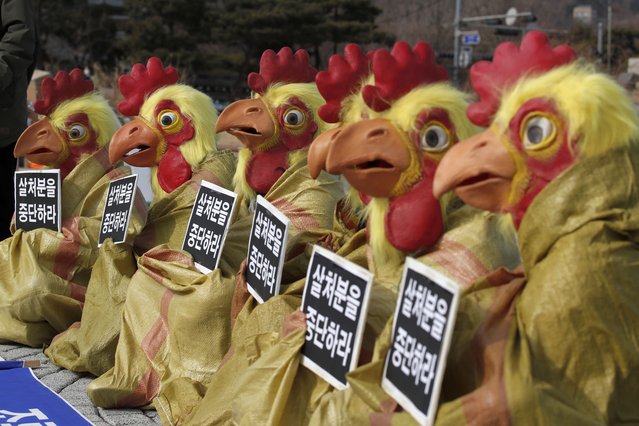 Animal rights activists wearing poultry masks attend a rally calling for the suspension of culling poultry as a preventive measure against the spread of avian influenza and demanding to use the vaccination measures against AI to help prevent the outbreak of avian influenza in Seoul, South Korea, Monday, January 25, 2021. The signs read: “Stop the slaughter”. (Photo by Lee Jin-man/AP Photo) 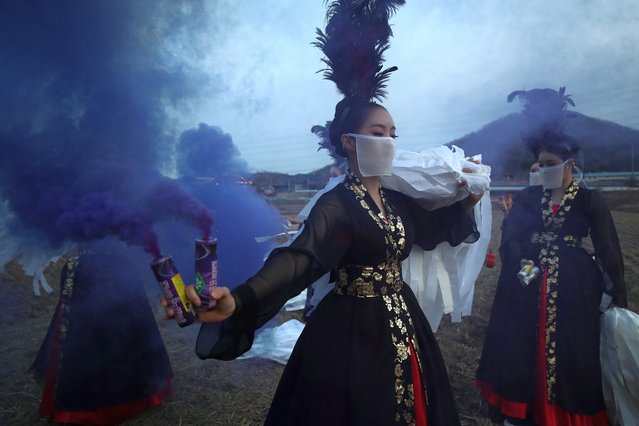 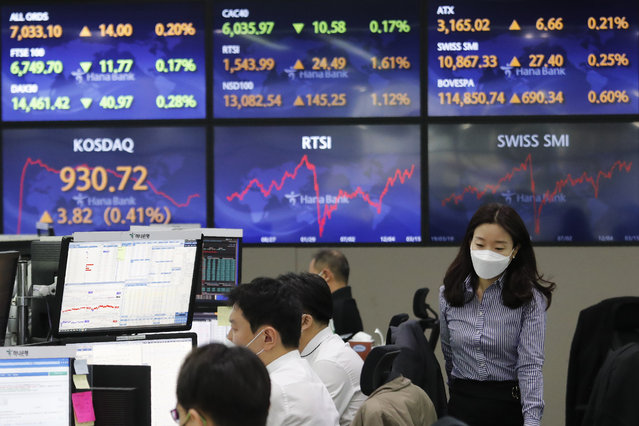 A currency trader passes by screens showing foreign exchange rates at the foreign exchange dealing room of the KEB Hana Bank headquarters in Seoul, South Korea, Tuesday, March 16, 2021. Asian shares mostly rose on Tuesday, cheered by a rally to all-time highs on Wall Street, though worries over the slow pace of coronavirus vaccinations in the region were weighing on sentiment. (Photo by Ahn Young-joon/AP Photo) 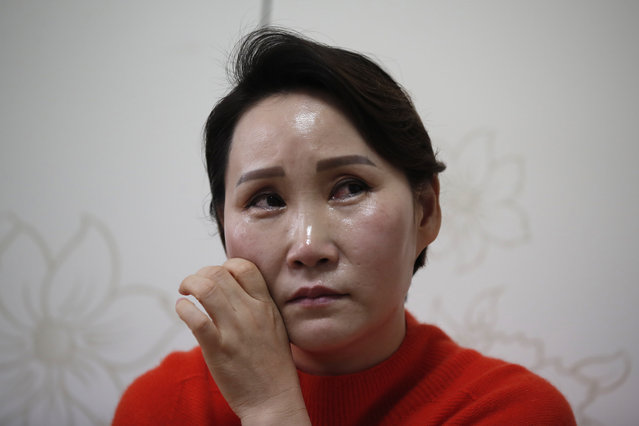 North Korean defector Choi Bok-hwa wipes her tears from her cheek during an interview in Ansan, South Korea, Wednesday, February 17, 2021. For the first time in years, Choi didn’t get her annual birthday call from her mother in North Korea. Choi believes the silence is linked to the pandemic, which led North Korea to shut its borders tighter than ever and impose some of the world’s toughest restrictions on movement. (Photo by Lee Jin-man/AP Photo) 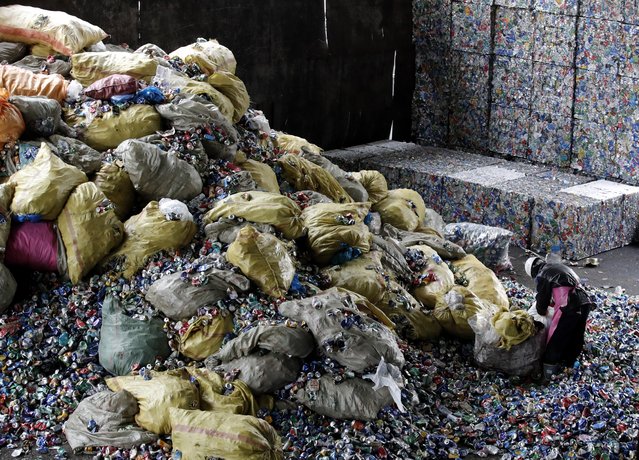 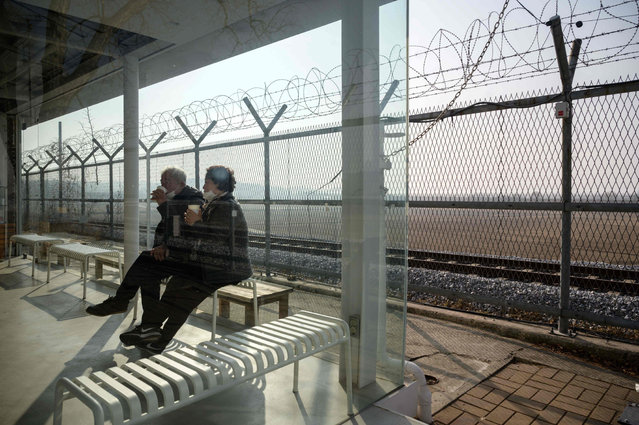 An elderly couple drink coffee before a barbed wire fence at the Imjingak tourist park beside the civilian buffer zone that leads to the Demilitarized Zone (DMZ) separating North and South Korea, in Paju, north of Seoul on February 12, 2021. (Photo by Ed Jones/AFP Photo) 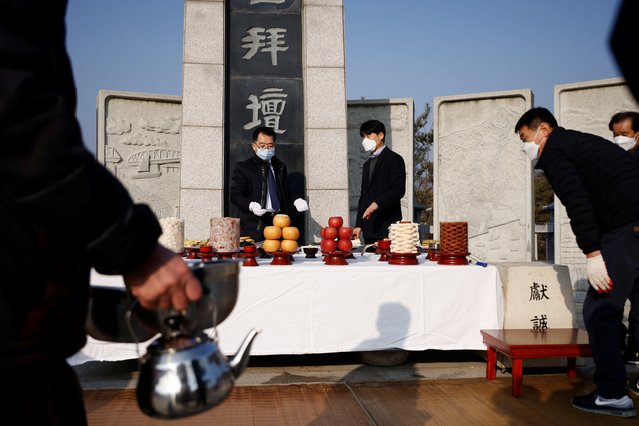 Relatives of North Korean refugees set up an altar for a memorial service for their North Korean ancestors, near the demilitarised zone separating the two Koreas, in Paju, February 12, 2021, on the occasion of Seolnal, the Korean Lunar New Year. (Photo by Kim Hong-Ji/Reuters) 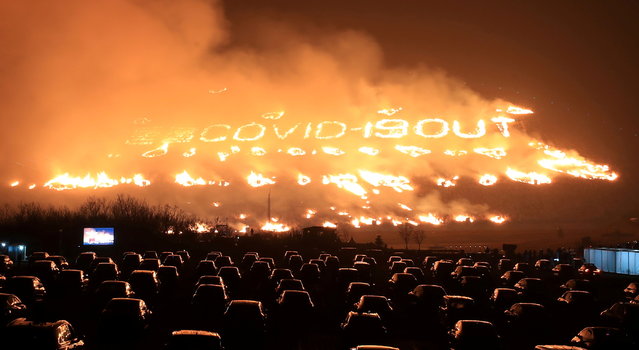 Spectators sitting inside their vehicles enjoy the Jeju Fire Festival as the fire forms the letters “COVID-19 OUT” at a hill in Jeju, South Korea, March 13, 2021. (Photo by Yonhap via Reuters) 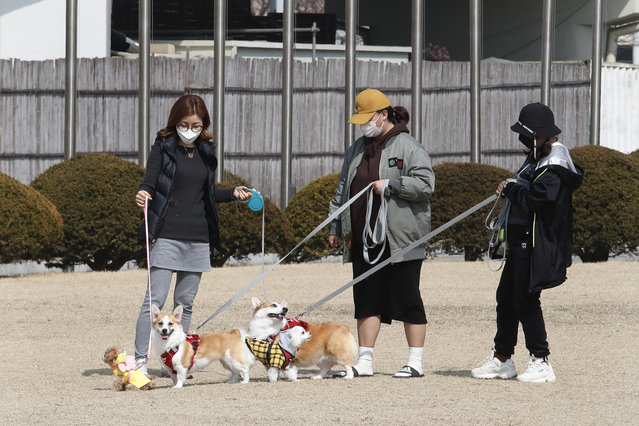 Women wearing face masks as a precaution against the coronavirus watch their dogs playing at a park in Goyang, South Korea, Wednesday, March 10, 2021. (Photo by Ahn Young-joon/AP Photo) 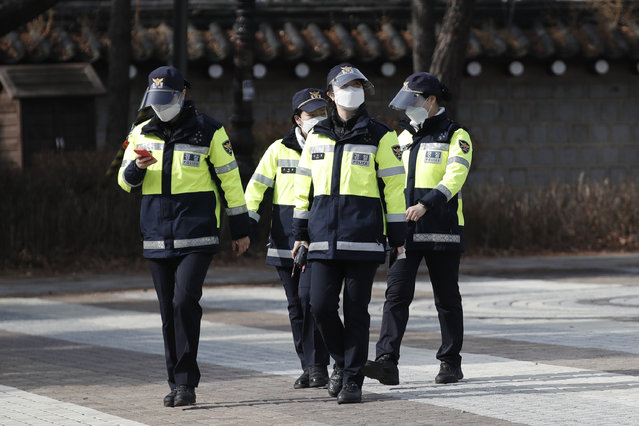 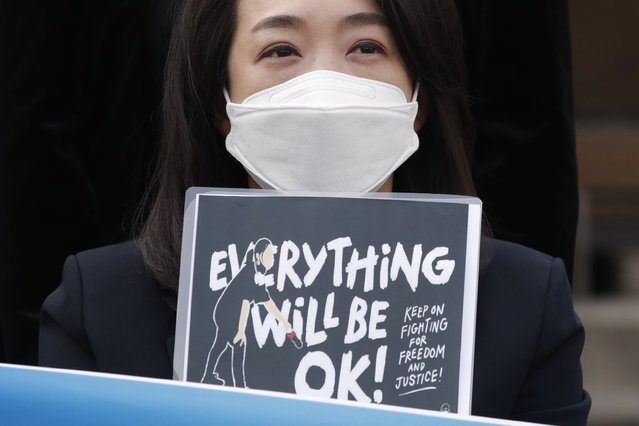 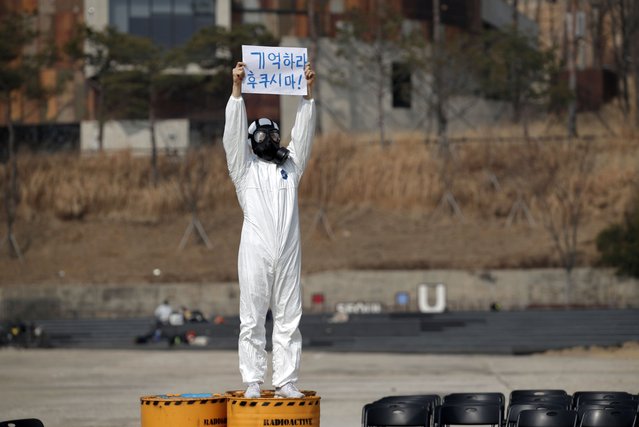 An environmental activist wearing gas mask holds a sign as he performs after a news conference marking the 10th anniversary of Fukushima nuclear disaster caused by the March 11 earthquake and tsunami in Japan, at a park in Seoul, South Korea, Thursday, March 11, 2021. Japan on Thursday marked the 10th anniversary of a massive earthquake, tsunami and nuclear disaster that struck Japan's northeastern coast. The letters read “Remember Fukushima”. (Photo by Lee Jin-man/AP Photo) 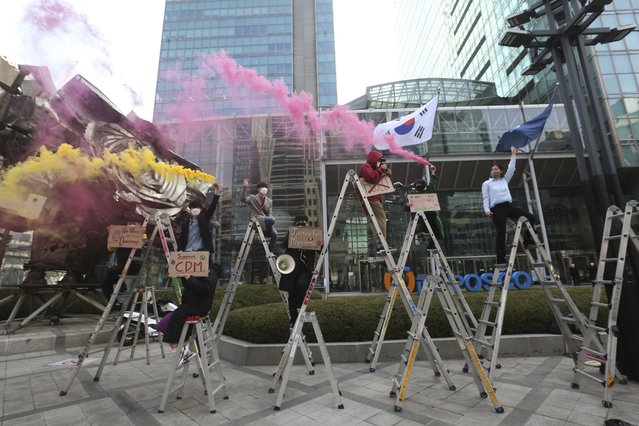 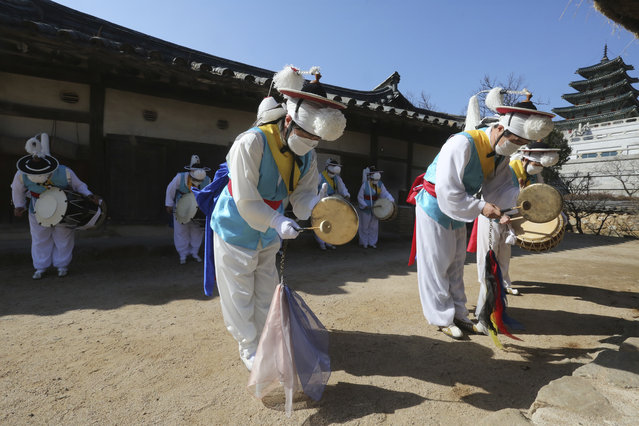 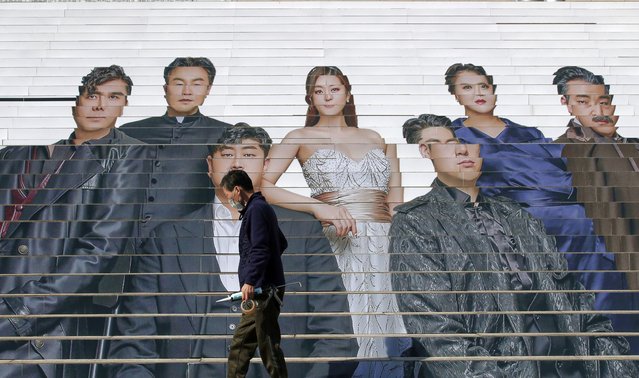 A man wearing a face mask as a precaution against the coronavirus, walks past in front of an advertisement of an opera performance outside of a theater in Seoul, South Korea, Wednesday, March 3, 2021. (Photo by Lee Jin-man/AP Photo) 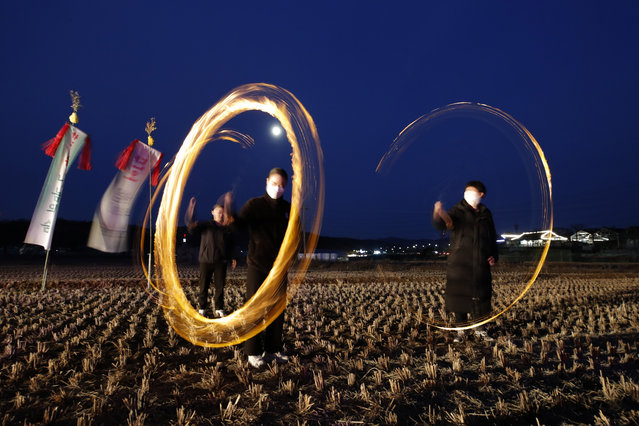 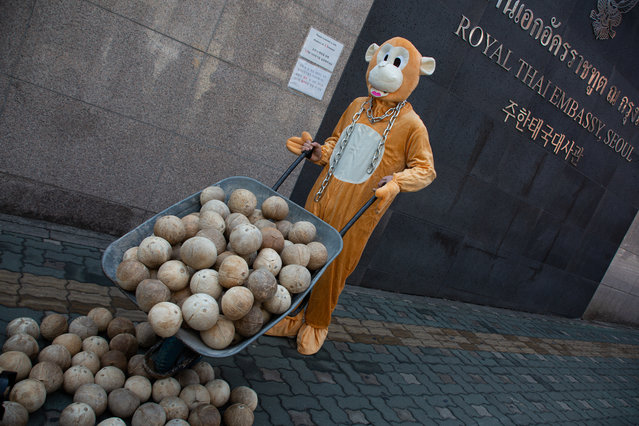 A member of People for the Ethical Treatment of Animals (PETA) wearing a monkey costume protests outside the Thai Embassy in Seoul, South Korea, 05 March 2021. Activists protested against the alleged unethical treatment of monkeys in Thailand's coconut industry. The animals, according to PETA, who are kept in cruel manners are forced to climb and pick coconuts that are later used in coconut milk products. Activists urged South Korean retailers and consumers to boycott coconut brands engaged in cruel monkey labor. (Photo by Jeon Heon-Kyun/EPA/EFE) 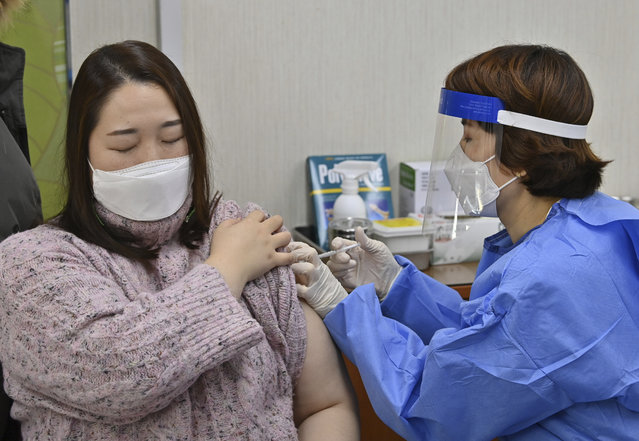 A nursing home worker, left, receives the first dose of the AstraZeneca COVID-19 vaccine at a health care center in Seoul Friday, February 26, 2021. South Korea on Friday administered its first available shots of coronavirus vaccines to people at long-term care facilities, launching a mass immunization campaign that health authorities hope will restore some level of normalcy by the end of the year. (Photo by Jung Yeon-je /Pool Photo via AP Photo) 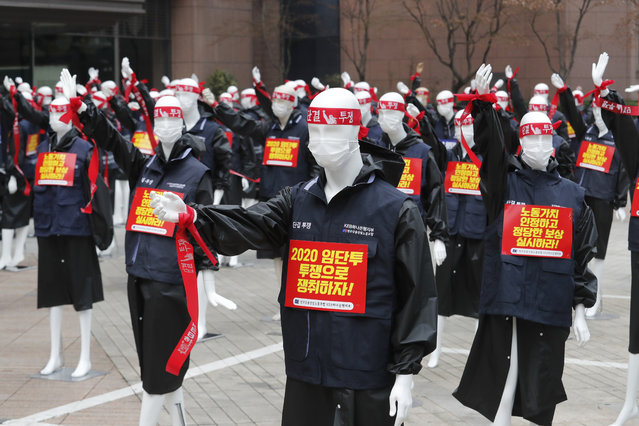 Mannequins are displayed as members of the KEB Hana Bank union stage a rally against their company's management policy in front of the bank's headquarters in Seoul, South Korea, Friday, March 12, 2021. The mannequins were used to avoid the violation of an ongoing ban on rallies with more than 10 people amid the coronavirus pandemic. The signs read: “Let's win wages through struggle, unity and fight”. (Photo by Ahn Young-joon/AP Photo) 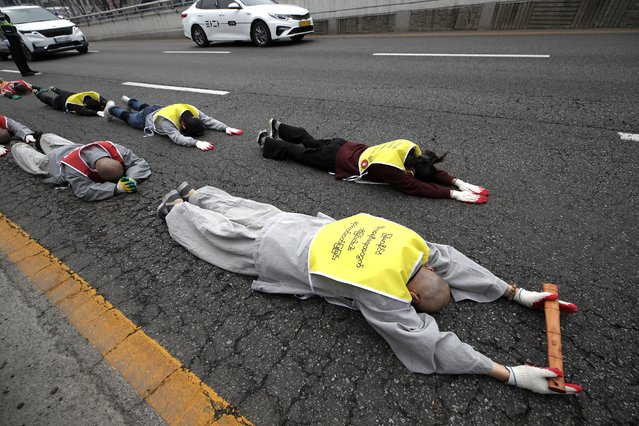 South Korean Buddhist monks and Myanmar nationals living in South Korea prostrate on the road in a march as they protest calling for the recovery of Myanmar's democracy and against the military coup near the Myanmar embassy in Seoul, South Korea, Friday, March 12, 2021. (Photo by Lee Jin-man/AP Photo)
Edit Del
18 Mar 2021 09:23:00, post received 0 comments
Publication archive:
←   →
Popular tags:
All tags
Last searches: