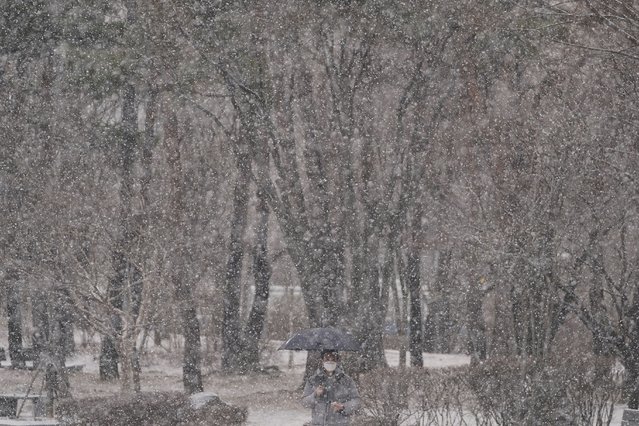 A man wearing a face mask to help curb the spread of the coronavirus uses an umbrella to take shelter from the snow at a park in Seoul, South Korea, Wednesday, January 19, 2022. (Photo by Lee Jin-man/AP Photo) 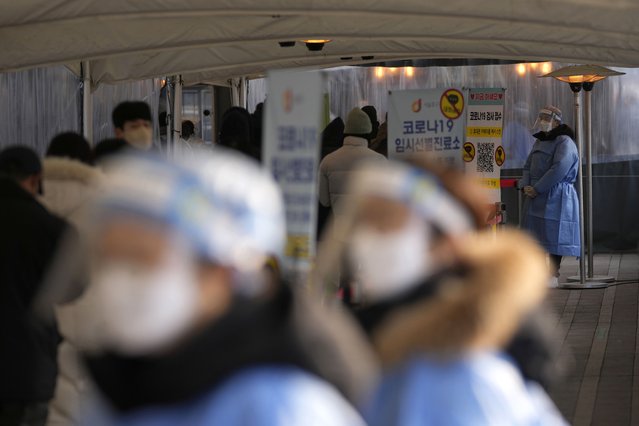 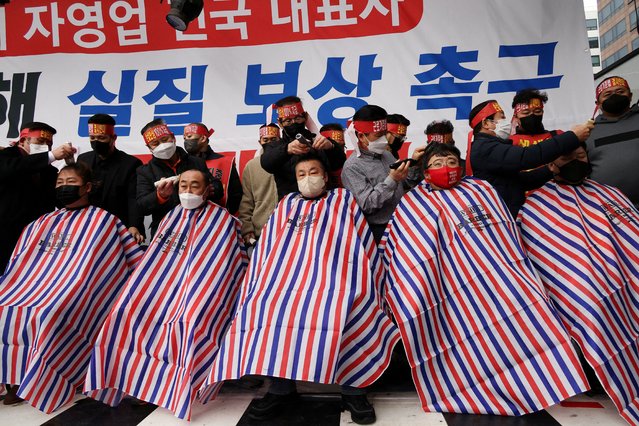 South Korean business owners have their heads shaved during a protest against the government's new social distancing rules which came into effect earlier this month near the National Assembly in Seoul, South Korea, January 25, 2022. (Photo by Kim Hong-Ji/Reuters) 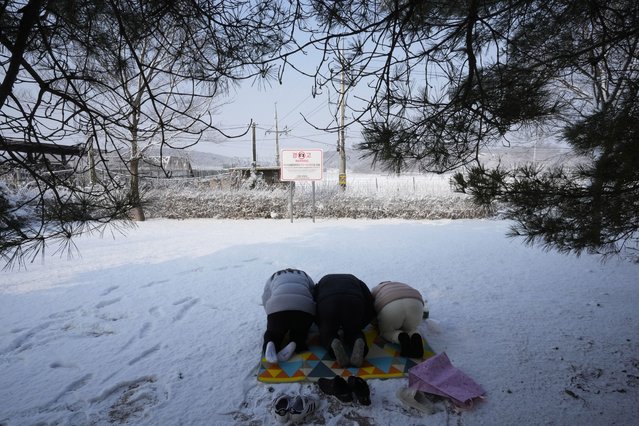 North Korean refugees and their family members bow to respect for their ancestors as they visit the Imjingak Pavilion near the border with North Korea, to celebrate the Lunar New Year in Paju, South Korea, Tuesday, February 1, 2022. (Photo by Ahn Young-joon/AP Photo) 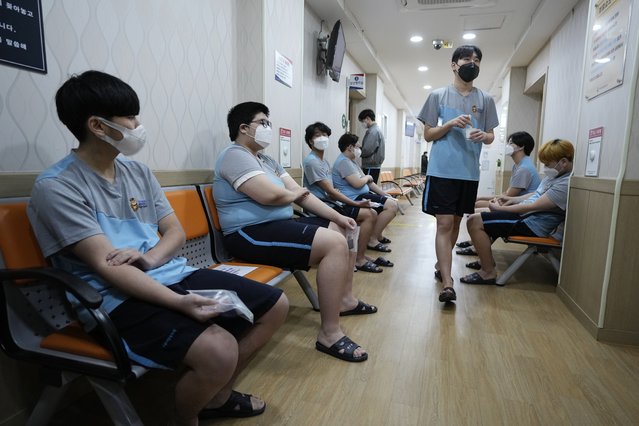 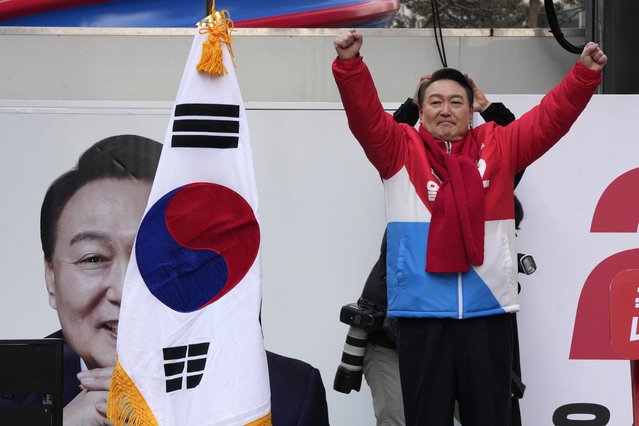 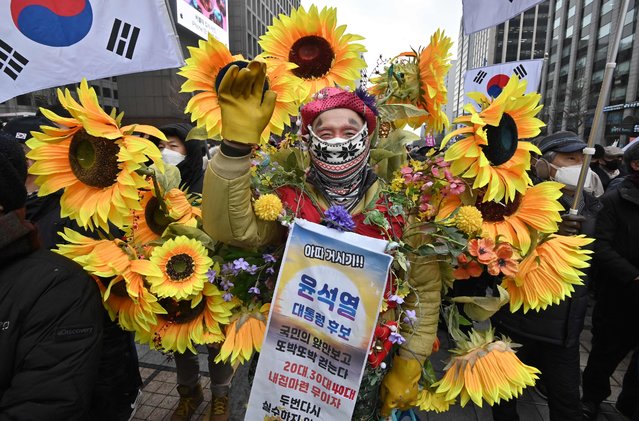 A man decorated with plastic flowers supports South Korean presidential candidate Yoon Suk-yeol of the opposition People Power Party during an election campaign in downtown Seoul on February 15, 2022, as the official presidential campaign period kicked off for a 22-day run ahead of the election on March 9. (Photo by Jung Yeon-je/AFP Photo) 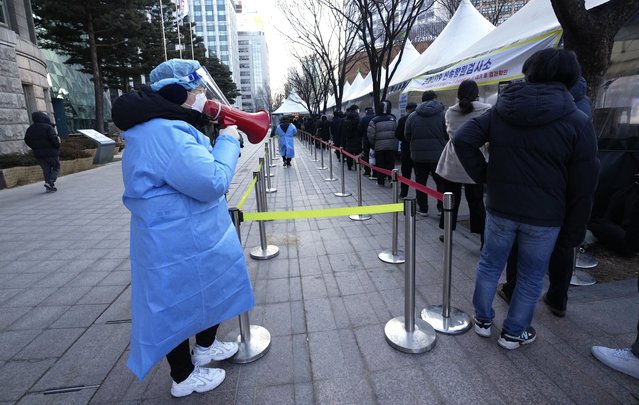 A medical worker uses a loud speaker to give information to people waiting for their coronavirus test at a makeshift testing site in Seoul, South Korea, Wednesday, February 23, 2022. South Korean health officials on Wednesday approved Pfizer’s coronavirus vaccine for the country’s unvaccinated younger children, expanding its immunization program in the face of a massive omicron outbreak that is beginning to drive up hospitalizations and deaths. (Photo by Ahn Young-joon/AP Photo) 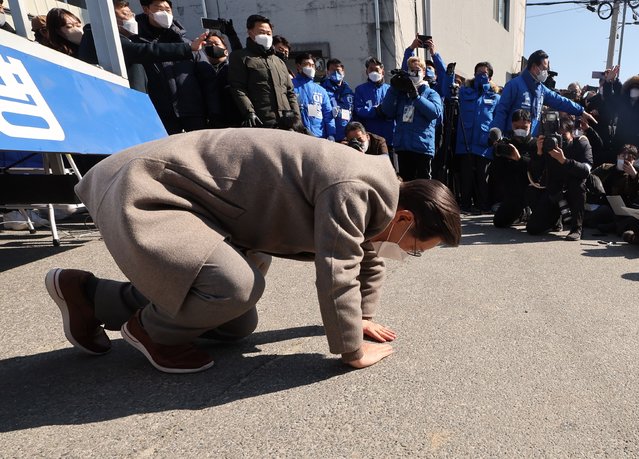 Lee Jae-myung, South Korea's presidential candidate for the Democratic Party, bows before voters during a campaign event in Chungju, South Korea, 24 February 2022. The country will hold its presidential election on 09 March 2022. (Photo by Yonhap/EPA/EFE) 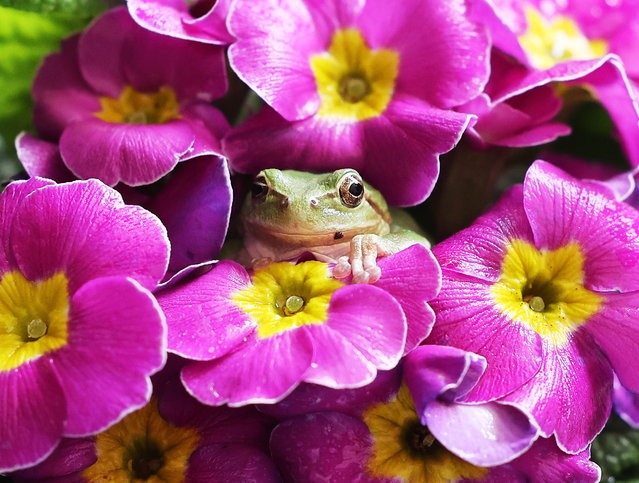 A green frog sits on a moth orchid at a local agricultural research center in Hwaseong, about 40 kilometers south of Seoul, South Korea, 03 March 2022, two days ahead of “gyeongchip”. On the lunar calendar, gyeongchip is the day when frogs awake from hibernation. (Photo by Yonhap/EPA/EFE) 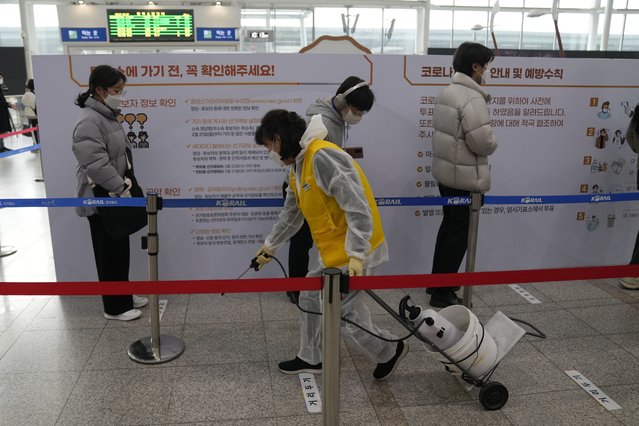 A woman wearing protective gear sprays disinfectant as a precaution against the coronavirus while people wait in line at a local polling station of the early voting for the March 9 presidential election in Seoul, South Korea on March 4, 2022. Tens of millions of South Koreans are expected to vote Wednesday, March 9 to choose their new president. The winner will take office on May 10 for a single five-year term. Whoever wins, a new leader will be tasked with resolving various economic woes, easing threats from nuclear-armed North Korea and healing a nation sharply split along the lines of ideology, generation and gender. (Photo by Lee Jin-man/AP Photo) 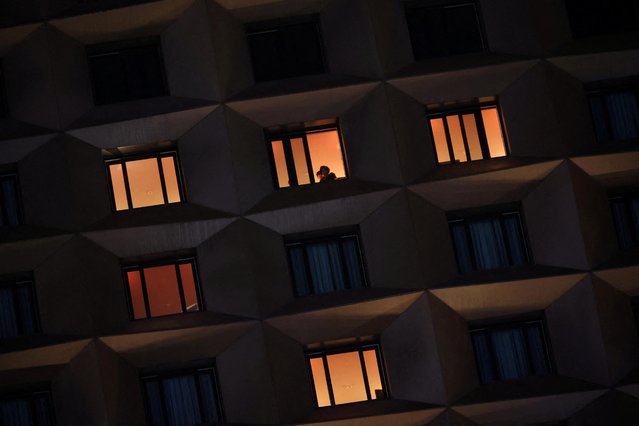 Yoon Suk Yeol, the presidential candidate of the main opposition People Power Party, gestures in front of the his party headquarters in Seoul, South Korea, Thursday, March 10, 2022. Yoon, a conservative former top prosecutor, was elected South Korea's new president on Thursday, defeating his chief liberal rival in one of the country's most closely fought presidential elections. (Photo by Baek Seung-ryul/Yonhap via AP Photo) 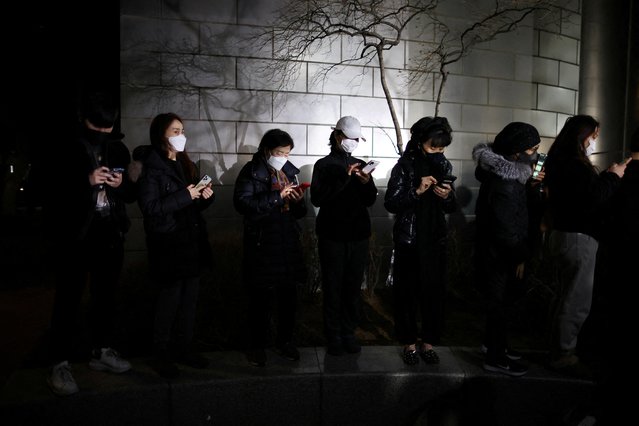 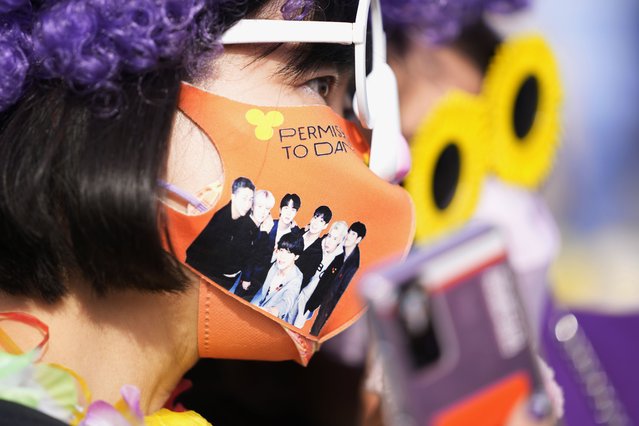 A fan of South Korean K-pop band BTS wears a face mask with a photo of BTS upon their arrival for the concert “BTS Permission to dance on stage-Seoul” at Seoul Olympic stadium in Seoul, South Korea, Thursday, March 10, 2022. (Photo by Lee Jin-man/AP Photo) 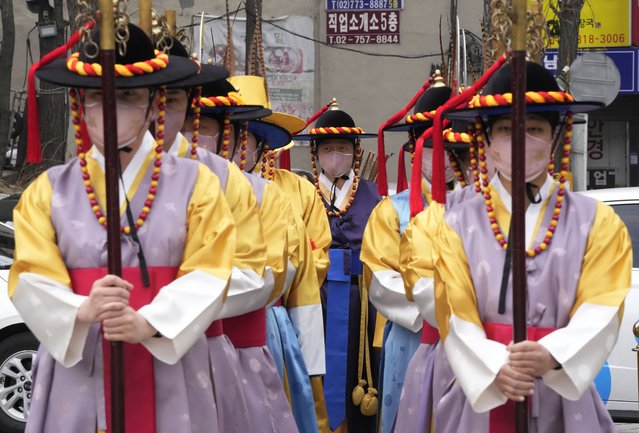 Performers wearing traditional guard uniforms and face masks stand during a reenactment of opening and closing of the gate at the Sungnyemun Gate in Seoul, South Korea, Tuesday, March 15, 2022. South Korea had its deadliest day yet of the pandemic on Tuesday as the country grapples with a record surge in coronavirus infections driven by the fast-moving omicron variant. (Photo by Ahn Young-joon/AP Photo) 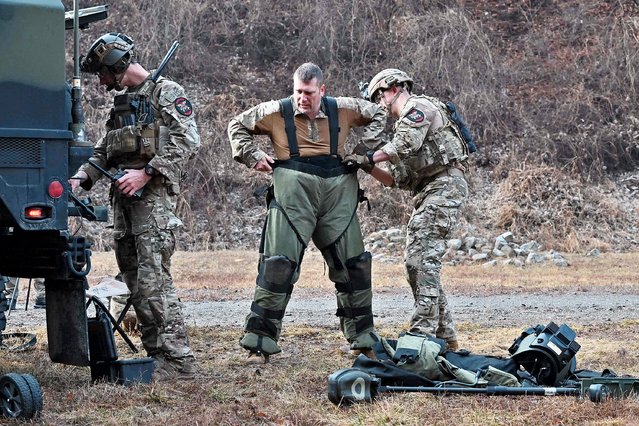 A US soldier puts on a bomb suit as his team compete in the “EOD Team of the Year Competition” to evaluate EOD (Explosive Ordnance Disposal) teams of US Forces Korea at the US army's Rodriguez shooting range in Pocheon on March 15, 2022. (Photo by Jung Yeon-je/AFP Photo) 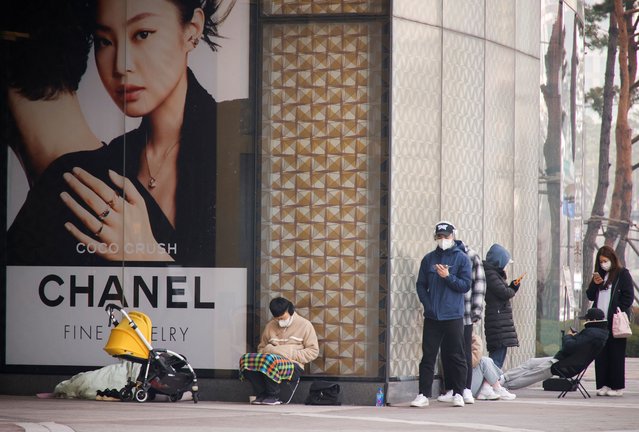 Shoppers line up outside a Chanel store in Seoul, South Korea, March 16, 2022. (Photo by Heo Ran/Reuters) 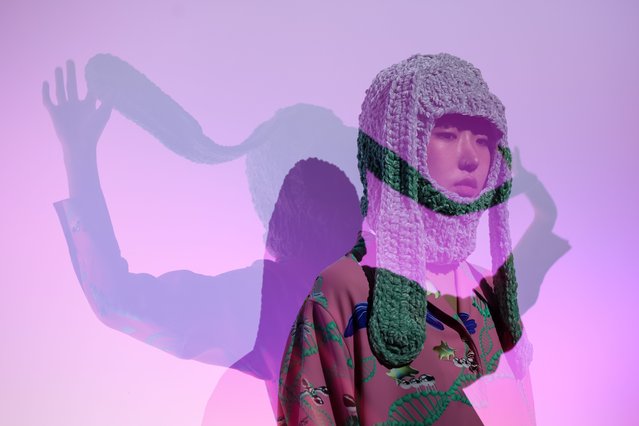