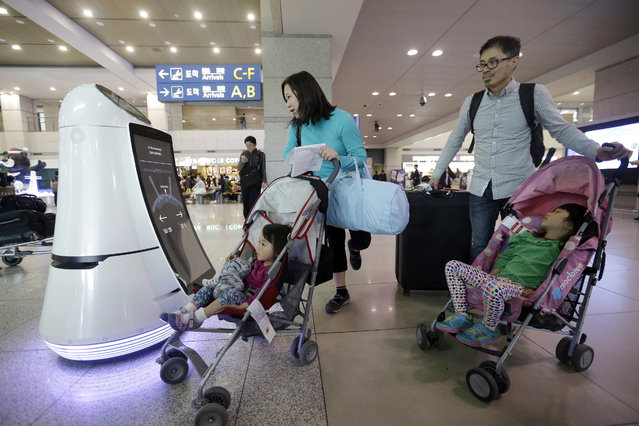 In this April 10, 2017 photo, Amethyst Ma, left, from San Jose, California, talks with Troika, a self-driving robot made by LG Electronics, at the Incheon International Airport in Incheon, South Korea. Robots will start roaming South Korea’s largest airport this summer, helping travelers find their boarding gates and keep its floors clean as the country prepares for its first Winter Olympics game. (Photo by Ahn Young-joon/AP Photo) 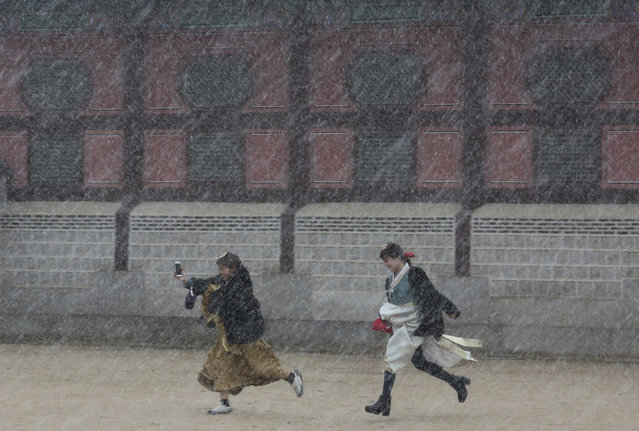 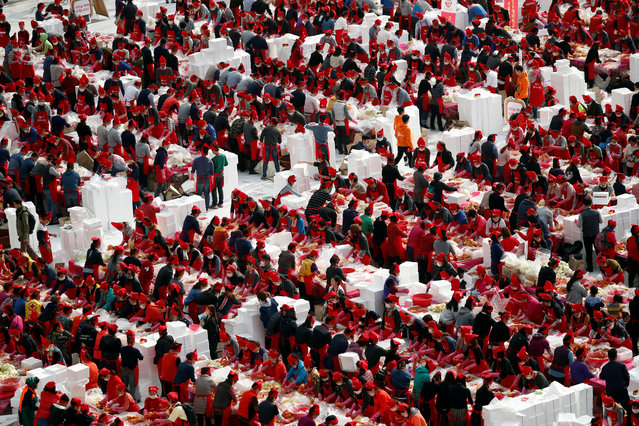 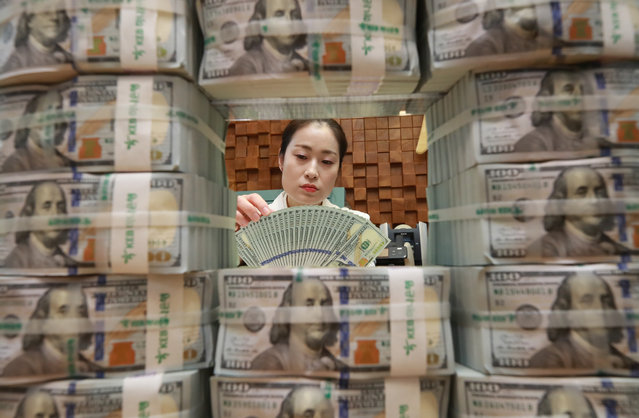 A clerk scrutinizes 100-dollar US banknotes for counterfeits at the headquarters of KEB Hana Bank in Seoul, South Korea, 04 May 2018. South Korea's foreign exchange reserves set a new record high for the second month in a row in April with increased gains from investment in foreign assets. As of the end of April, the country's foreign exchange reserves came to 398.42 billion US dollar, up $1.67 billion US dollar from a month earlier, according to the data by the Bank of Korea. (Photo by EPA/EFE/Yonhap) 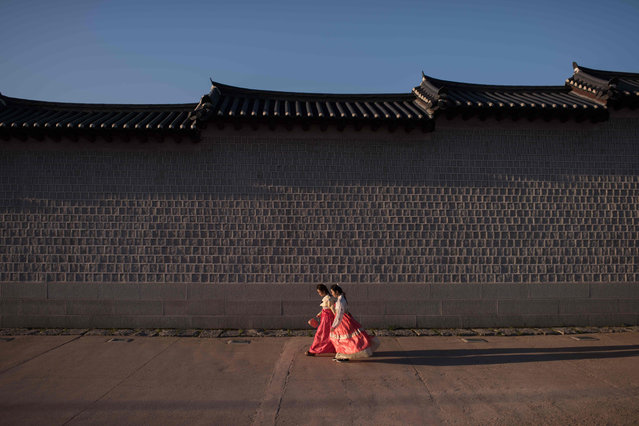 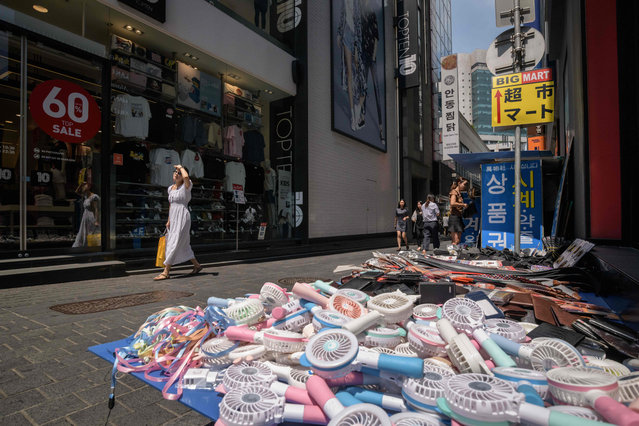 Electric fans are displayed for sale on a street in the Myeongdong shopping district in Seoul on August 1, 2018. Temperatures in Seoul reached 39 degrees on the first day of August marking the highest for the city in 111 years, local media reported. (Photo by Ed Jones/AFP Photo) 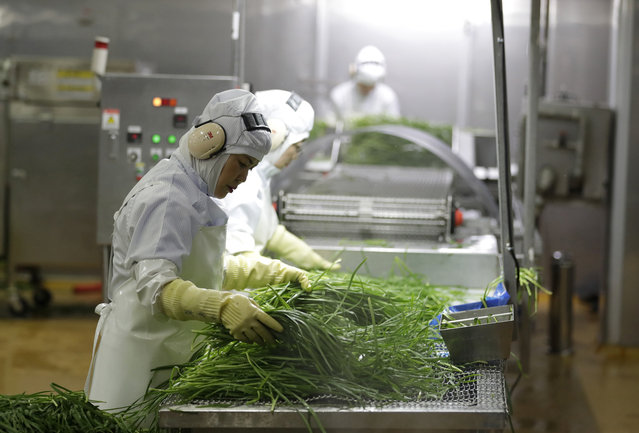 In this July 18, 2018, photo, workers inspect chives before they go into Bibigo dumplings at an automated factory of CJ CheilJedang Corp. in Incheon, South Korea. South Korea’s largest food company is making a multimillion-dollar bet on “mandu,” developing its own machines to automate the normally labor-intensive production of the Korean dumpling and building factories around the world. (Photo by Lee Jin-man/AP Photo) 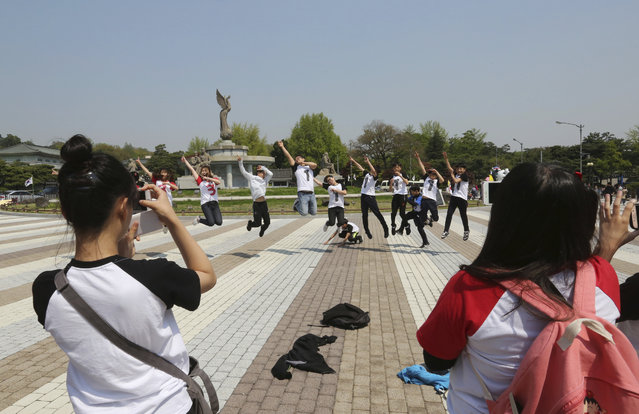 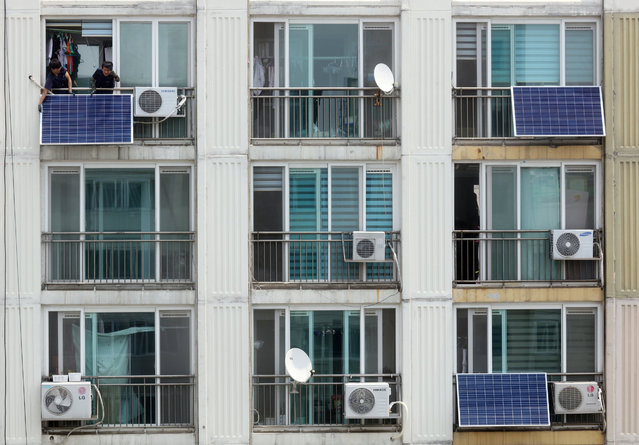 Workers install solar modules on apartment balconies in Seoul, South Korea, 20 June 2017. More and more people are getting interested in new and renewable energy in the country. (Photo by EPA/Yonhap) 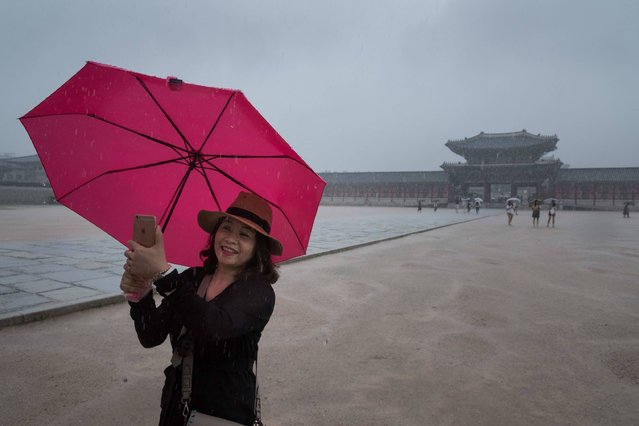 A woman takes a photo before Gyeongbokgung palace in Seoul on July 10, 2017. South Korea is experciencing its annual rainy season, which typically lasts from late June to late July. (Photo by Ed Jones/AFP Photo) 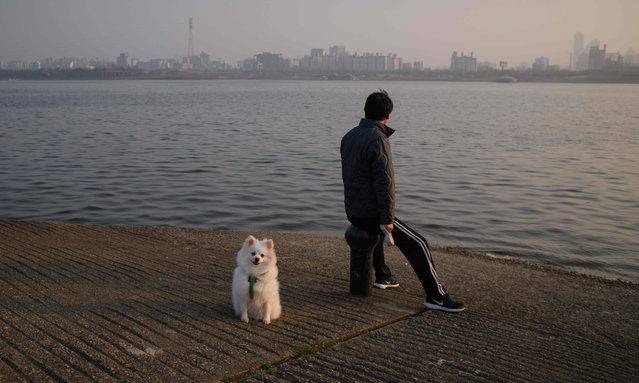 A man and dog sit on a pier before the Han river in Seoul on March 25, 2018. South Korea is bracing for days of poor air quality as rising seasonal temperatures and an unfavourable wind direction threatens to compound local pollution, resulting in government issued “fine dust” warnings with air quality monitoring websites reporting PM 2.5 levels of over 200, or “unhealthy” – eight times higher than the guideline limit for 24- hour exposure advised by the World Health Organisation (WHO). (Photo by Ed Jones/AFP Photo) 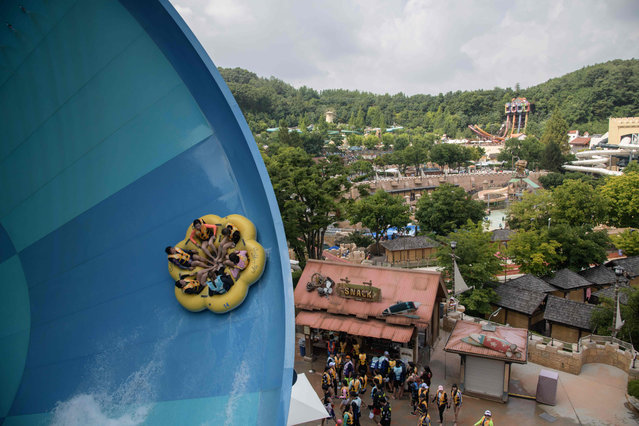 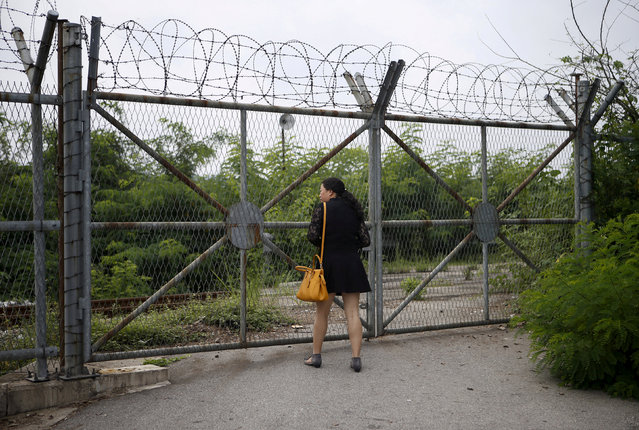 A Chinese tourist looks over a barbed-wire fence at the Imjingak pavilion near the demilitarized zone which separates the two Koreas, in Paju, South Korea, August 21, 2015. (Photo by Kim Hong-Ji/Reuters) 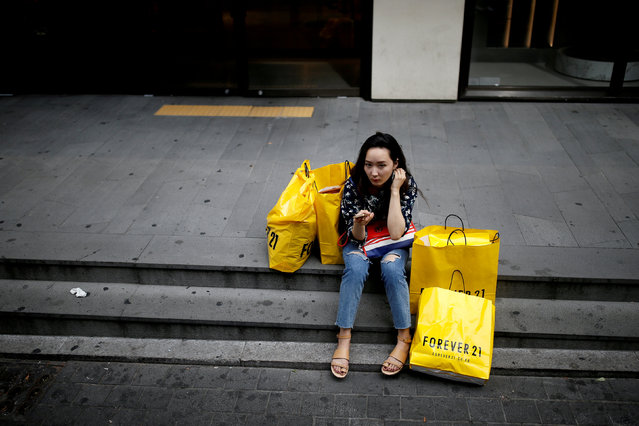 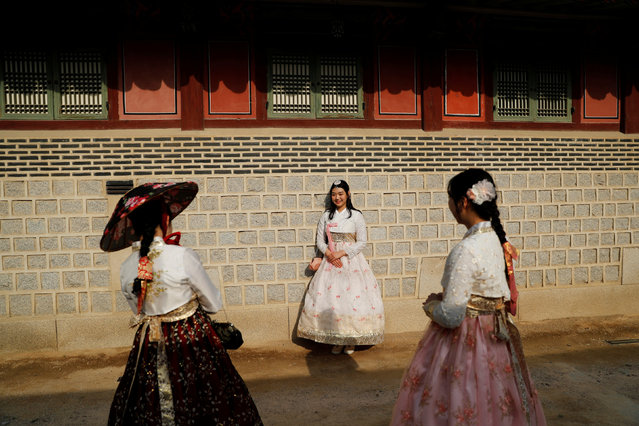 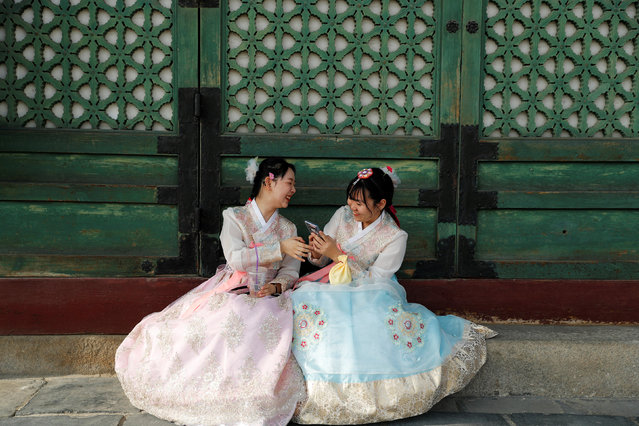 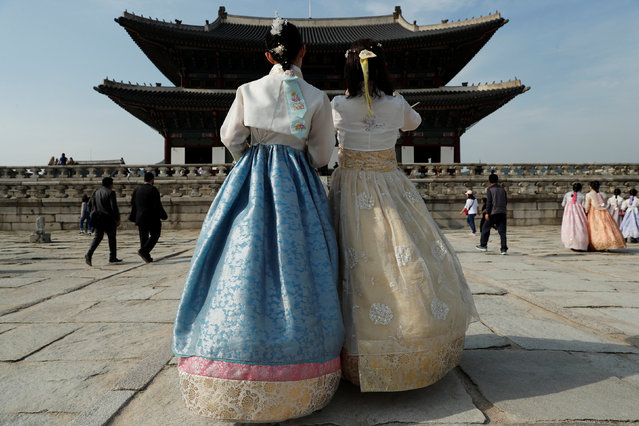 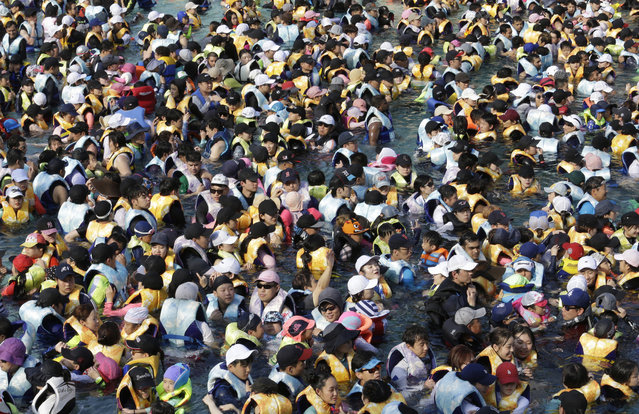 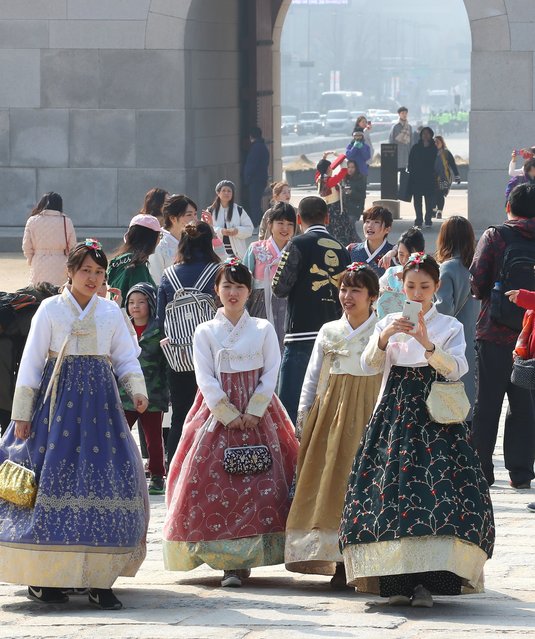 Tourists are in the traditional Korean costume, “hanbok”, at Gyeongbok Palace in downtown Seoul, South Korea, 11 March 2018. (Photo by EPA/EFE/Yonhap) 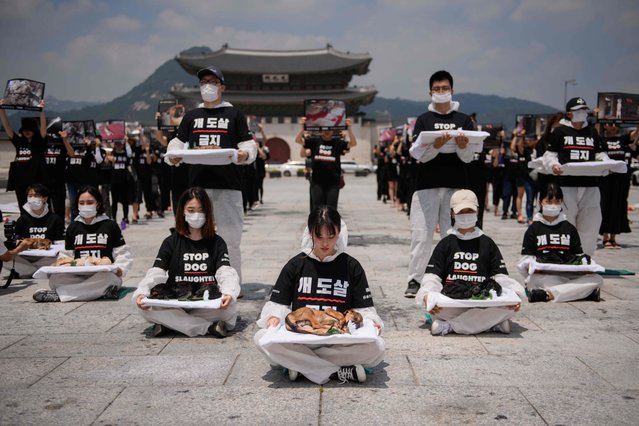 Activists from animal rights groups “Animal Liberation Wave” and “Last Chance for Animals” hold dead puppies retrieved from a dog meat farm, as they protest against the dog meat trade in Gwanghwamun Plaza in central Seoul on July 17, 2018. (Photo by Ed Jones/AFP Photo) 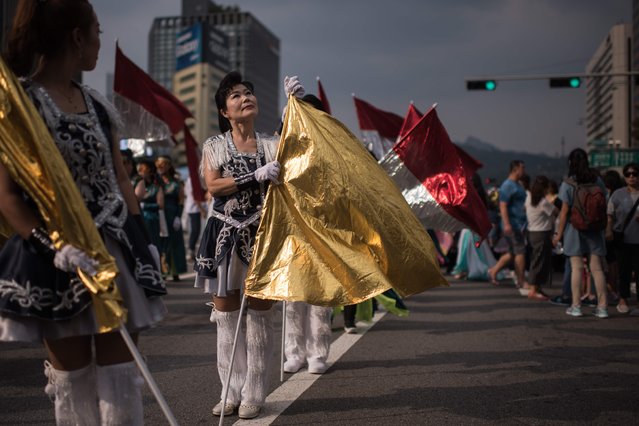 Performers participate in a parade during the Seoul Street Art Festival in Seoul on October 8, 2017. (Photo by Ed Jones/AFP Photo) 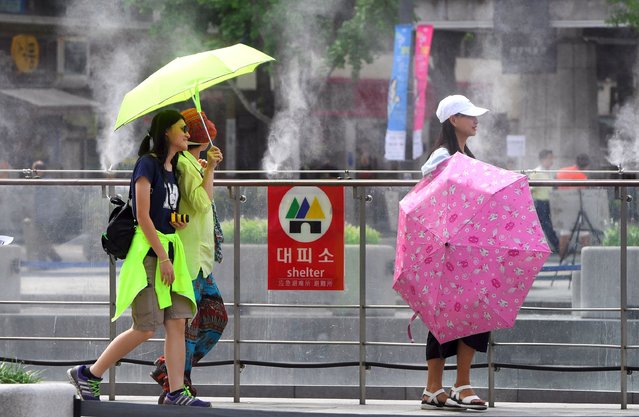 Pedestrians walk past a shelter sign set up on an exit of a subway station in Seoul on September 4, 2017. South Korean media called on September 4 for Seoul to consider building its own nuclear weapons amid growing doubts over its decades-old alliance with Washington following North Korea's sixth nuclear test. (Photo by Jung Yeon-Je/AFP Photo) 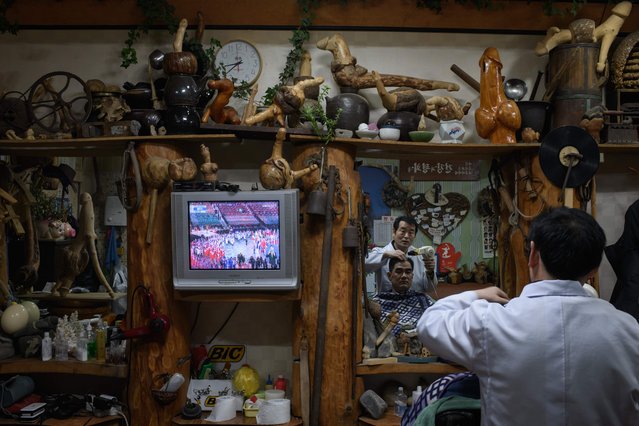 A barber shaves a customer in his shop where he diplays his hand-carved penises, as a television shows coverage of the closing ceremony, near the Olympic stadium of the Pyeongchang 2018 Winter Olympic games in Hoenggye, South Korea on February 25, 2018. (Photo by Ed Jones/AFP Photo) 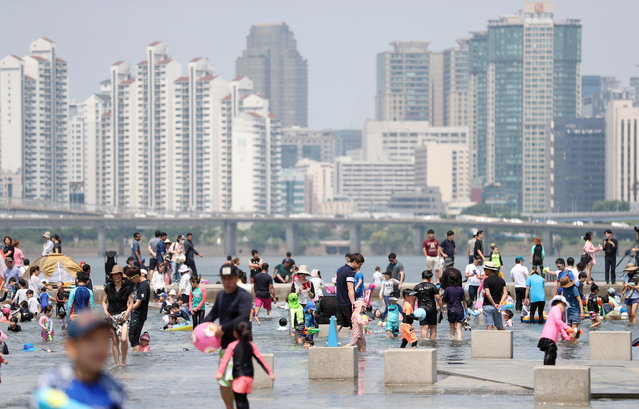 Hundreds of Seoul citizens enjoy the hot summer weekend at a riverside park of the Han River in Seoul, South Korea, 24 June 2018. (Photo by EPA/EFE/Yonhap) 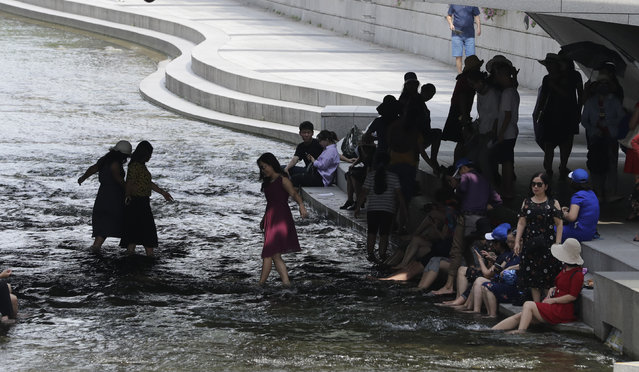 Visitors rest in the shade in the midday heat at Cheonggye stream in downtown Seoul, South Korea, Monday, July 23, 2018. The temperature in a city north of Tokyo reached 41.1 degrees Celsius (106 degrees Fahrenheit) on Monday, the highest ever recorded in Japan, as a deadly heat wave gripped a wide swath of the country and nearby South Korea. (Photo by Lee Jin-man/AP Photo) 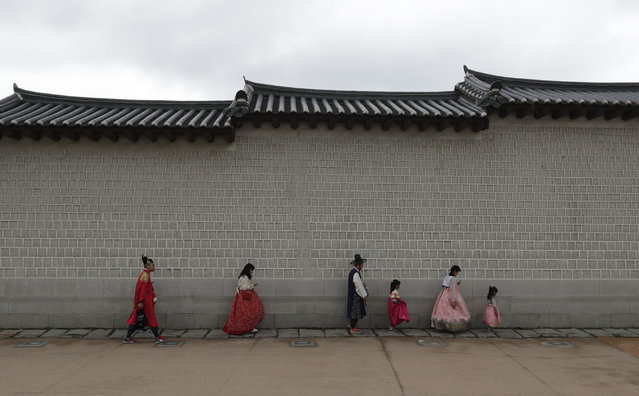 Visitors dressed in South Korean traditional “Hanbok” attire walk along a wall in a line protecting themselves from a rain outside the Gyeongbok Palace, the main royal palace during the Joseon Dynasty, and one of South Korea's well known landmarks in Seoul, South Korea, Thursday, July 12, 2018. (Photo by Lee Jin-man/AP Photo) 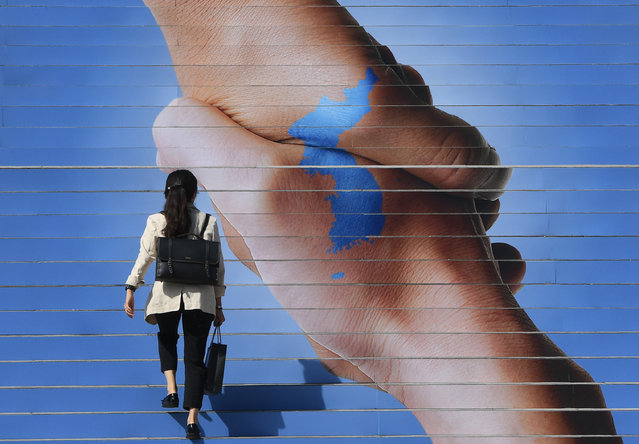 A woman walks on the stairs decorated with an image of two hands shaking to form the shape of the Korean Peninsula to support the upcoming inter- Korean summit, in downtown Seoul on September 17, 2018. South Korean President Moon Jae- in will fly to the North Korean capital on September 18, for his third summit with the North' s leader Kim Jong Un as a rapid diplomatic thaw takes hold on the peninsula despite stalled progress in denuclearisation talks between Pyongyang and Washington. (Photo by Jung Yeon-je/AFP Photo)
Edit Del
26 Sep 2018 00:05:00, post received 0 comments
Publication archive:
←   →
Popular tags:
All tags
Last searches: