Fact A Look at Life in South Sudan 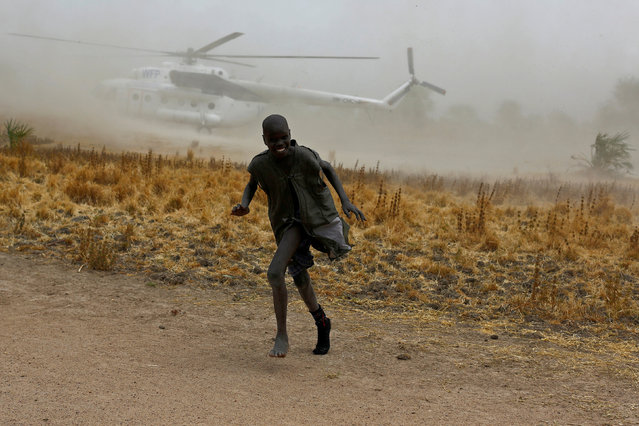 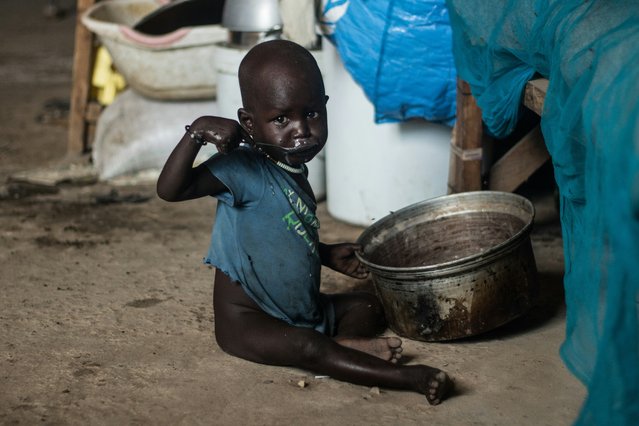 A child eats porridge sitting on the floor of a shelter at Mangateen Internal Displaced persons (IDPs) center in Juba on November 17, 2018. Some 5000 IDPs have been relocated to a new resettlement centre from the UN Protection of Civilians site (POC) after ethnic clashes erupted in the POC. (Photo by Akuot Chol/AFP Photo) 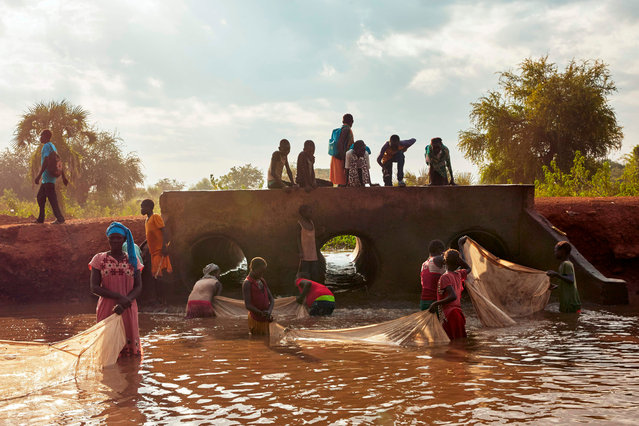 Refugees and the local host community fish together at a stream formed from intense flooding in Maban, South Sudan on Wednesday November 27, 2019. Large areas of eastern South Sudan have been affected by heavy rains in the past months, leaving an estimated 420,000 people displaced from their homes. (Photo by Alex McBride/AFP Photo) 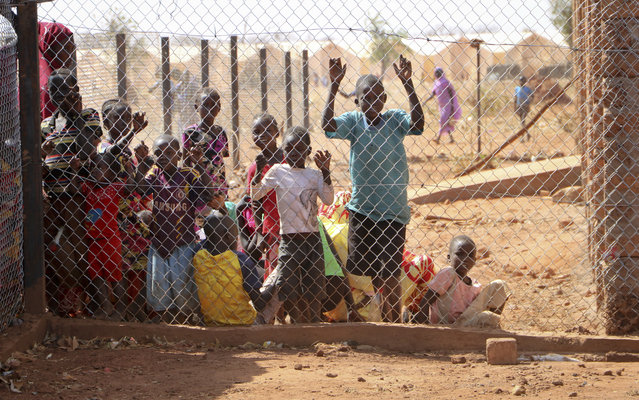 In this February 20, 2018, photo, newly arrived Sudanese refugees wait behind a wire fence at a reception center in Yida, South Sudan. While millions of South Sudanese flee their country in what the United Nations has called the world's fastest-growing refugee crisis since the Rwandan genocide, hundreds of thousands of people from neighboring Sudan have found an unlikely haven there from fighting at home. (Photo by Sam Mednick/AP Photo) 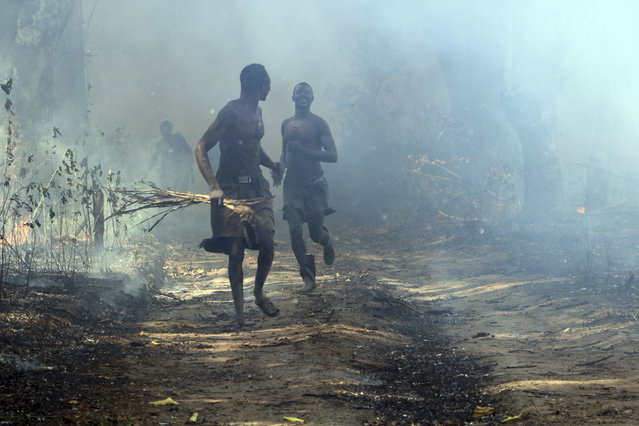 In this photo of Saturday March 16 2019, men run out of a burning field after setting it on fire, a tactic used to clear swaths of land and use it for cultivation but its a tactic that threatens nearby animal park land. South Sudan is trying to rebuild its vast national parks and game reserves following a five-year civil war that killed nearly 400,000 people. The conflict stripped the country of much wildlife but biodiversity remains rich with more than 300 mammal species, including 11 primates, but poaching is a growing threat. (Photo by Sam Mednick/AP Photo) 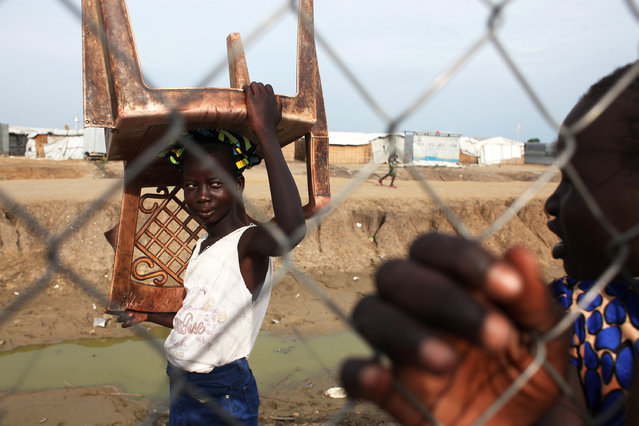 An internally displaced girl carries a chair inside a compound at the Protection of Civilians (POC) site in the UN base in Bentiu, South Sudan on July 16, 2018. (Photo by Andreea Campeanu/Reuters) 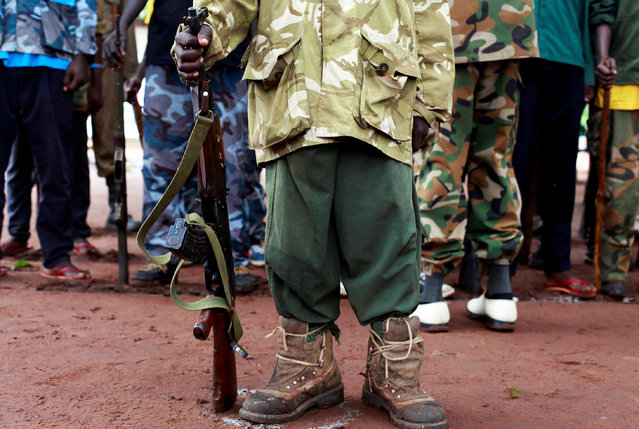 A former child soldier holds a gun as they participate in a child soldiers' release ceremony, outside Yambio, South Sudan, August 7, 2018. (Photo by Andreea Campeanu/Reuters) 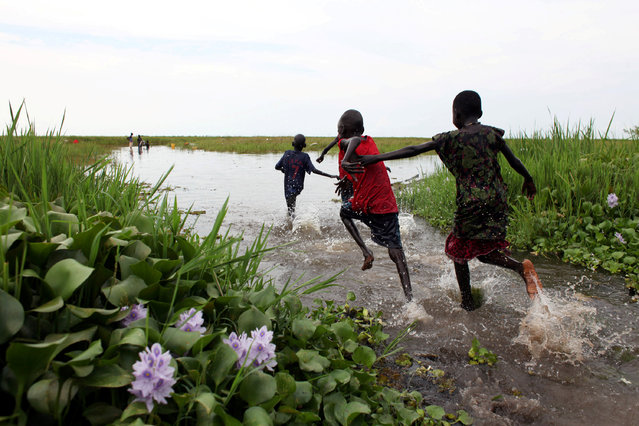 Children play in the Sudd Swamp near the town of Nyal, in South Sudan on August 19, 2018. (Photo by Andreea Campeanu/Reuters) 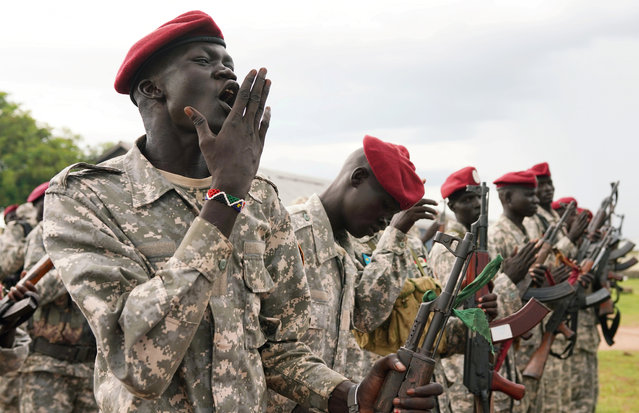 Presidential protection guards from South Sudan's People Defence Force (SSPDF) cheer as they stand in a formation at their training site in Rejaf West, outside Juba, South Sudan, April 26, 2019. (Photo by Andreea Campeanu/Reuters) 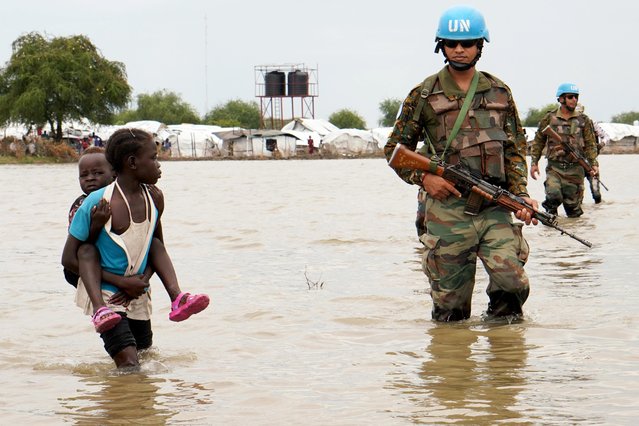 A girl holding a child walks past UN peacekeepers, after heavy rains in the town of Pibor, Boma state, South Sudan, November 6, 2019. (Photo by Andreea Campeanu/Reuters) 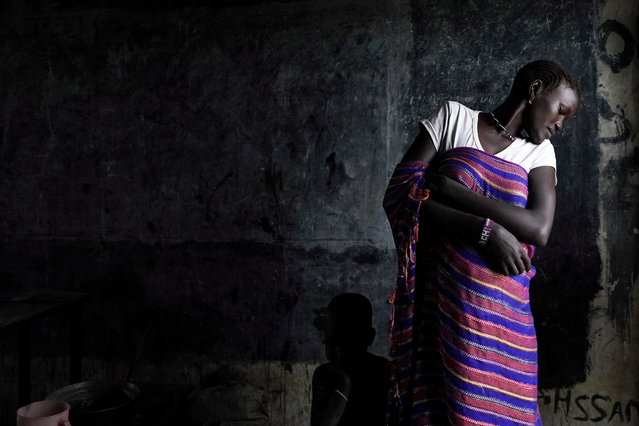 A displaced woman looks at her child who is hiding behind her dress, in a school now occupied by IDPs (Internally Displaced People) after heavy rains and floods forced hundreds of thousands of people to leave their homes, in the town of Pibor, Boma state, South Sudan, November 6, 2019. (Photo by Andreea Campeanu/Reuters) 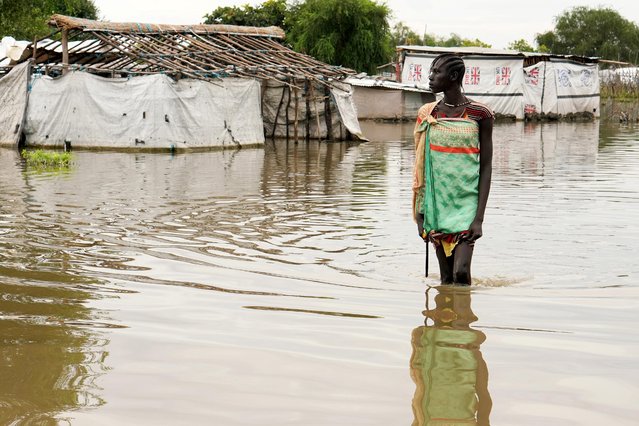 A girl walks in water in the town of Pibor, Boma state, South Sudan, November 6, 2019. (Photo by Andreea Campeanu/Reuters) 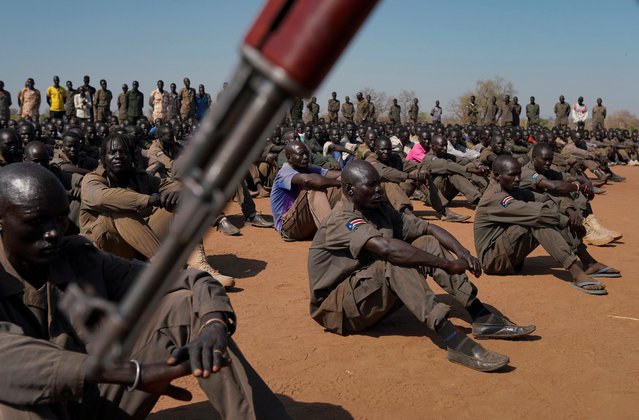 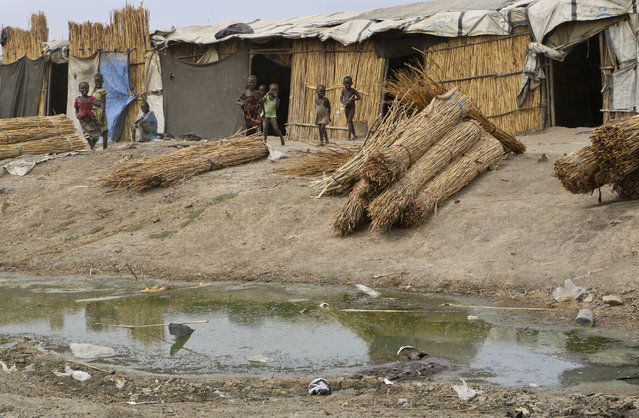 In this photo taken Sunday, December 9, 2018, children stand outside their straw huts across from a stagnant pond in the United Nations protection of civilians site in Bentiu, South Sudan. Six months ago planning ahead in civil war-torn South Sudan seemed impossible but now, after warring sides signed a new peace deal in September that the government vows will hold, some are starting to rebuild their lives. (Photo by Sam Mednick/AP Photo) 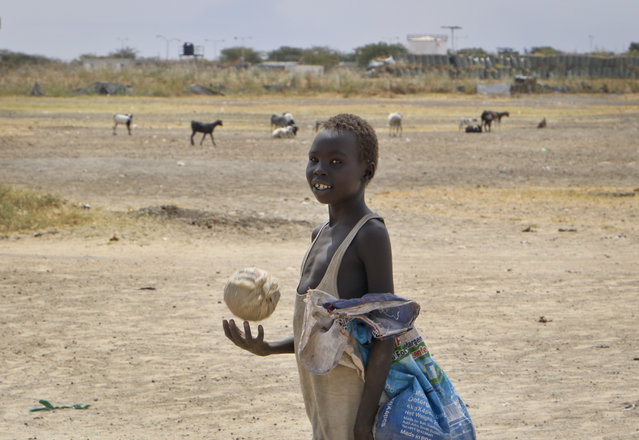 In this photo taken Sunday, December 9, 2018, a boy throws a ball while walking in the United Nations protection of civilians site in Bentiu, South Sudan. (Photo by Sam Mednick/AP Photo) 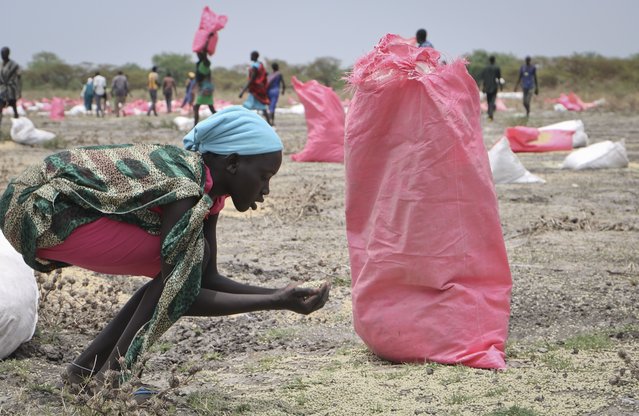 In this photo taken Wednesday, May 2, 2018, a woman scoops fallen sorghum grain off the ground after an aerial food drop by the World Food Program (WFP) in the town of Kandak, South Sudan. Five years into South Sudan's civil war more than seven million people are facing severe hunger without food aid, according to the latest analysis by the U.N. and the government. (Photo by Sam Mednick/AP Photo) 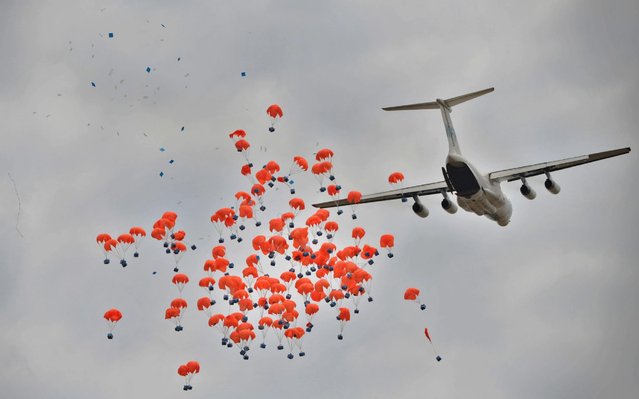 A Russian-made Ilyushin airlifter aircraft leased to the World Food Programme (WFP) makes a drop of food aid near a village in Ayod county, South Sudan, on February 6, 2020. The villagers hear the distant roar of jet engines before a cargo plane makes a deafening pass over Mogok, dropping sacks of grain from its hold to the marooned dust bowl below. South Sudan is the last place on earth where food is airdropped, and in Mogok there was little other choice: without the tonnes of grains and cereals, people would have simply perished. (Photo by Tony Karumba/AFP Photo) 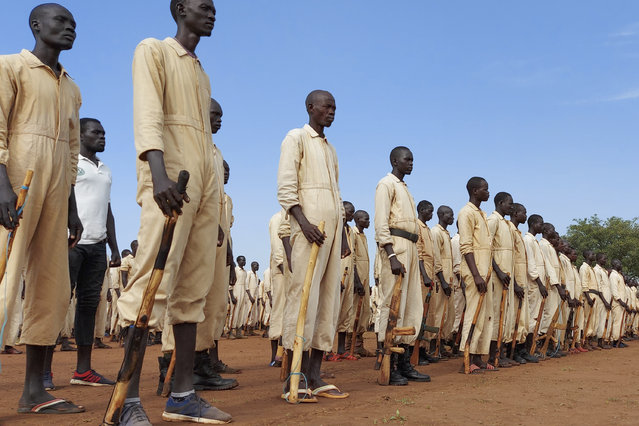 Trainees parade with the wooden mock guns which they use to train with, during the visit of the defense minister to a military training center in Owiny Ki-Bul, Eastern Equatoria, South Sudan Saturday, June 27, 2020. At crowded camps in South Sudan, former enemies are meant to be joining forces and training as a unified security force after a five-year civil war so they can help the shattered country recover but they can barely find enough food. (Photo by Maura Ajak/AP Photo) 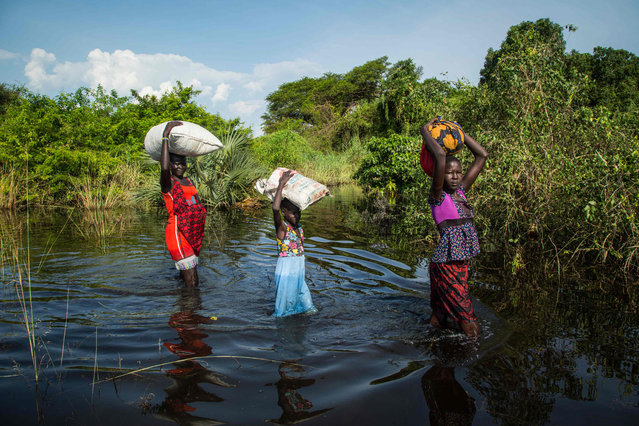