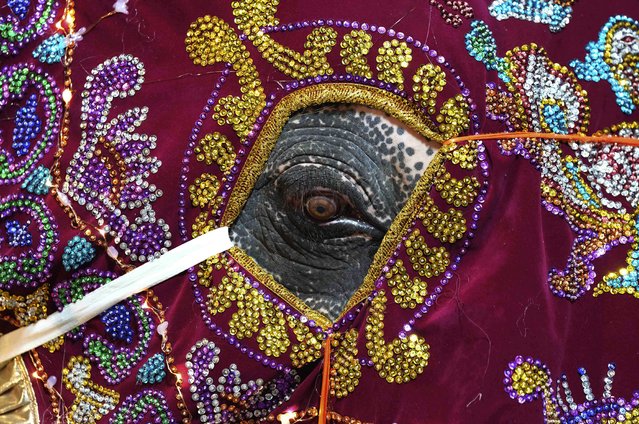 A decorated elephant waits to take part in a procession during Navam Perahera, an annual Buddhist temple festival, in Colombo, Sri Lanka, Tuesday, February 15, 2022. Buddhist monks, dancers, musicians and others participate in the festivities at famous Gangaramaya temple, one of the tourists attractions in Colombo. (Photo by Eranga Jayawardena/AP Photo) 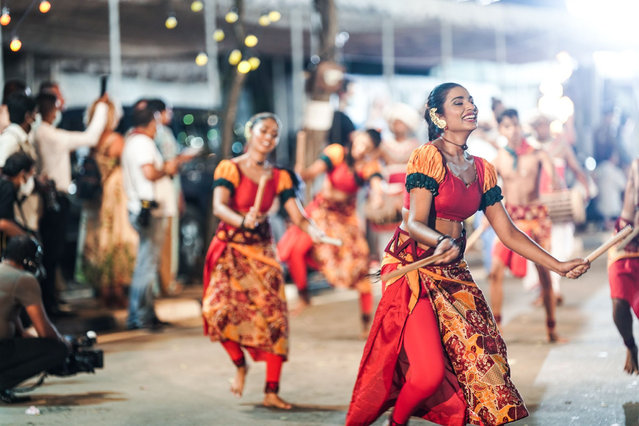 Dancers perform during the Navam Perahera at the Gangaramaya Temple in Colombo, Sri Lanka, on February 15, 2022. (Photo by Xinhua News Agency/Rex Features/Shutterstock) 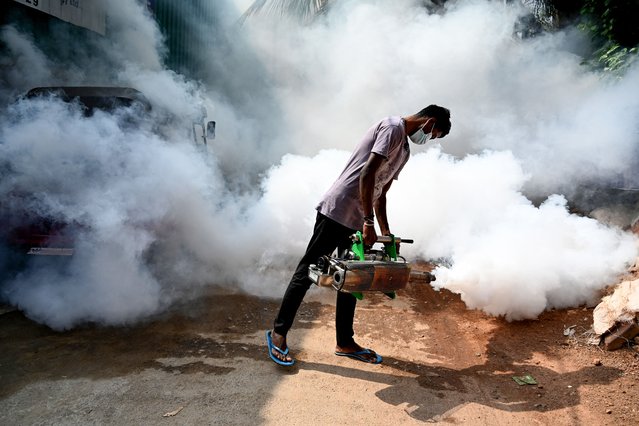 A front-line worker fumigates a neighbourhood to ward off mosquitoes in Colombo on February 25, 2022. (Photo by Ishara S. Kodikara/AFP Photo) 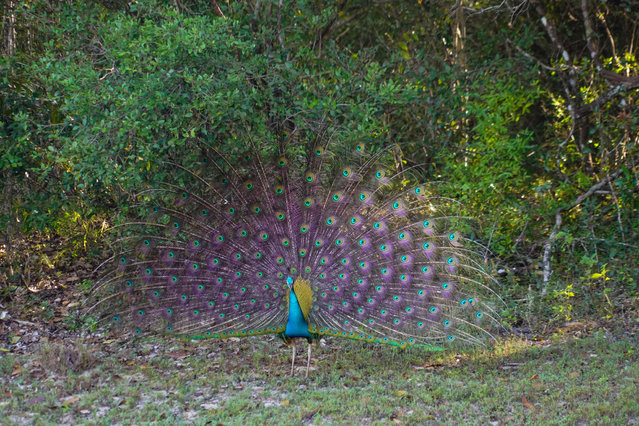 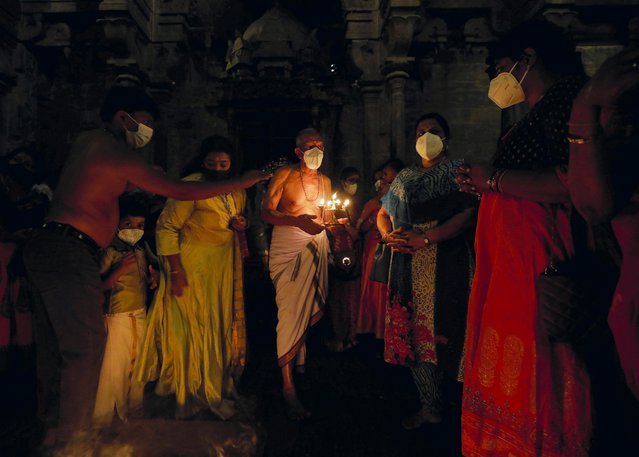 A priest blesses devotees during the Maha Shivaratri festival at a Hindu temple in Colombo, Sri Lanka, March 1, 2022. (Photo by Dinuka Liyanawatte/Reuters) 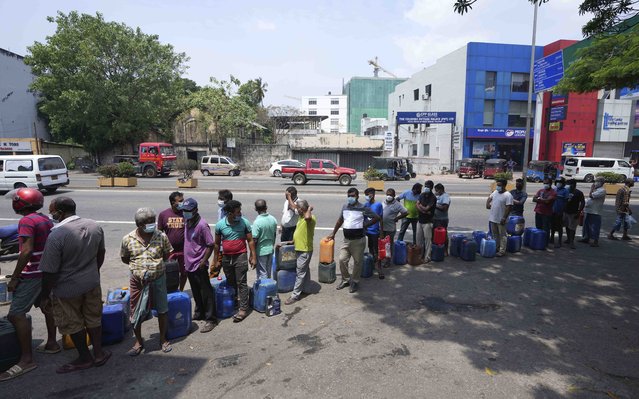 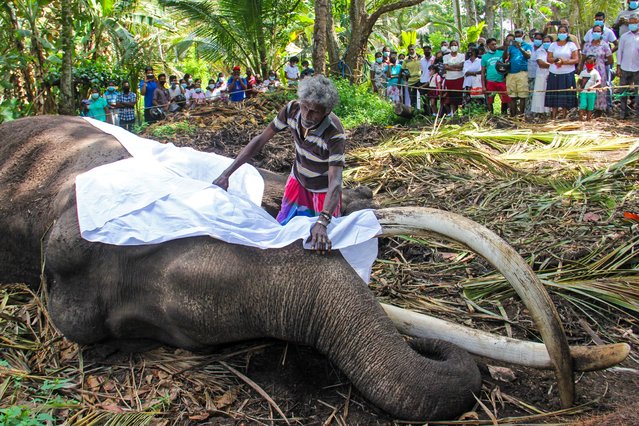 The mahout Wilson Kodituwakku places a white sheet on the body of Sri Lanka's sacred tusker Nadugamuwa Raja, who carried a golden casket of relics at an annual Buddhist pageant, in Weliweriya on March 7, 2022, as the death sparked a stream of mourners and calls for a state funeral. (Photo by AFP Photo/Stringer) 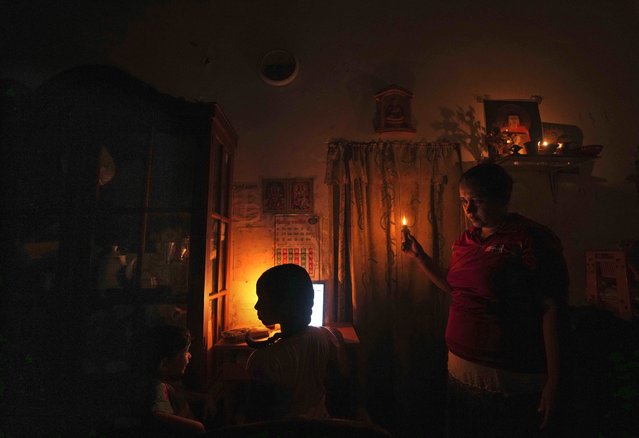 A Sri Lankan mother interacts with her children as they attend online lessons with a help of kerosine oil lamp during a power cut in Colombo, Sri Lanka, Friday, March 4, 2022.. Sri Lanka is going through hours of daily power cuts since it can’t operate turbines because of a fuel shortage and the government has only a little foreign currency to pay for oil imports. The country has no power for 7 1/2 hours a day, forcing children to study under homemade kerosene oil lamps, fishermen to limit fishing and shops and industries to limit production and business. (Photo by Eranga Jayawardena/AP Photo) 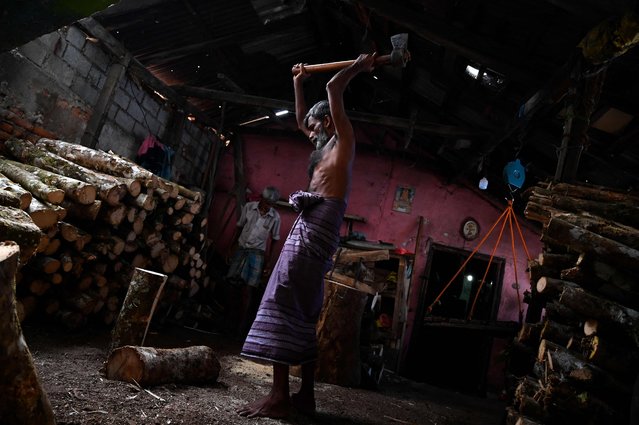 A worker cuts firewood at a workshop shop in Colombo on March 11, 2022. (Photo by Ishara S. Kodikara/AFP Photo) 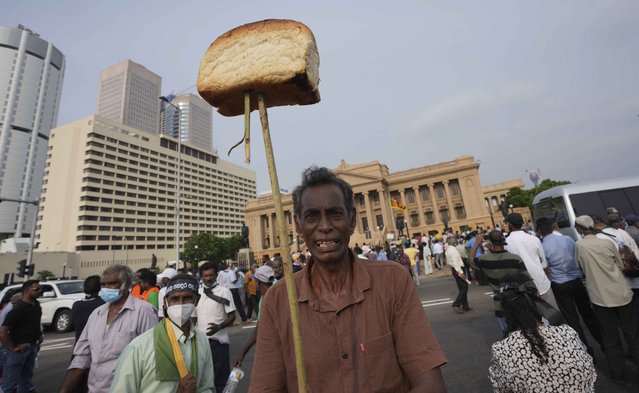 A supporter of Sri Lanka's main opposition displays a loaf of bread to highlight the rising food prices during a protest outside the president's office in Colombo, Sri Lanka, Tuesday, March 15, 2022. The protestors were demanding the resignation of President Gotabaya Rajapaksa as the country suffers one of the worst economic crises in history. (Photo by Eranga Jayawardena/AP Photo) 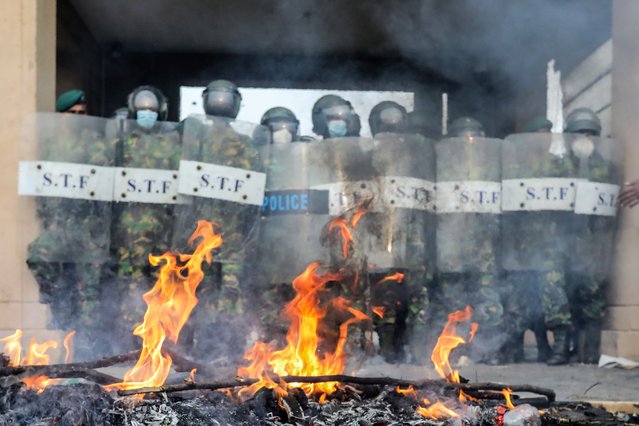 A pyre lit by members and supporters of Sri Lanka's opposition party alliance, the Samagi Jana Balawegaya (United People's Power) dies down while Police Special Task Force (STF) personnel guard the entrance to the Presidential Secretariat at Galle Face in Colombo, Sri Lanka, 15 March 2022. The opposition in Parliament headed by MP Sajith Premadasa staged a protest march towards Colombo demanding that the incumbent government go home after handing over power to the opposition. The island nation has been severely hit by the lack of foreign exchange, resulting in severe shortages in food, fuel, and imported goods. (Photo by Chamila Karunarathne/EPA/EFE) 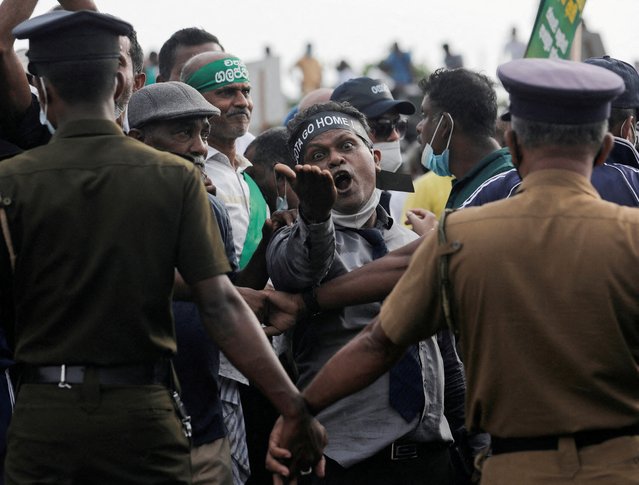 A man shouts against President Gotabaya Rajapaksa as people block the main road in front of the President's secretariat during a protest organised by main opposition party Samagi Jana Balawegaya against the worsening economic crisis that has brought fuel shortages and spiralling food prices in Colombo, Sri Lanka, March 15, 2022. (Photo by Dinuka Liyanawatte/Reuters) 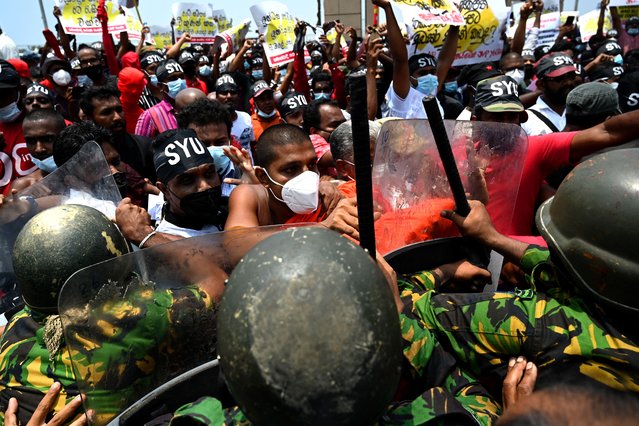 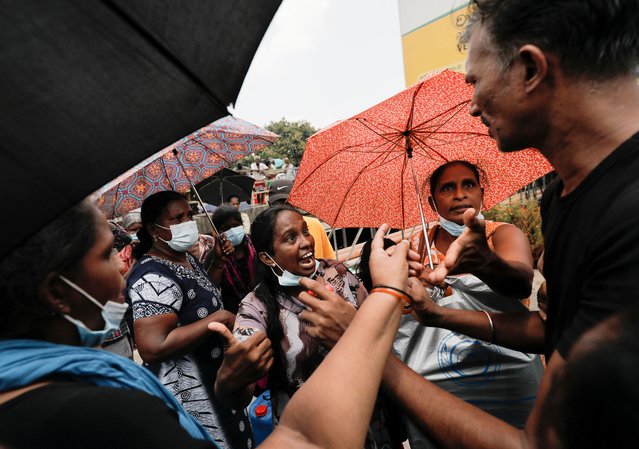 A woman argues with others as people start queue jumping after the first oil bowser with kerosene arrives, as they wait to buy kerosene oil for kerosene cookers amid a shortage of domestic gas due to country's economic crisis, at a fuel station in Colombo, Sri Lanka on March 21, 2022. (Photo by Dinuka Liyanawatte/Reuters) 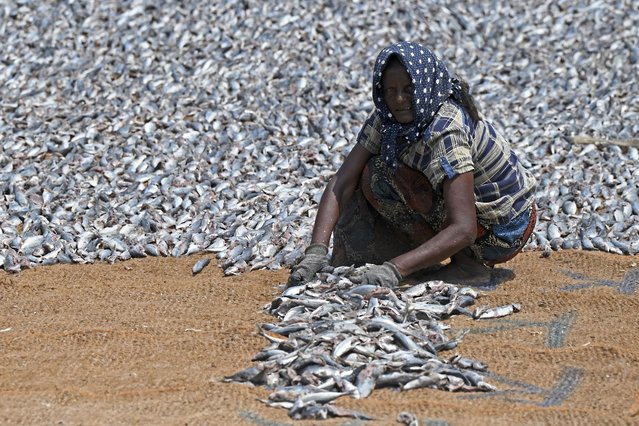 A worker dries fish at a fishery harbour in Negombo on March 24, 2022. (Photo by Ishara S. Kodikara/AFP Photo) 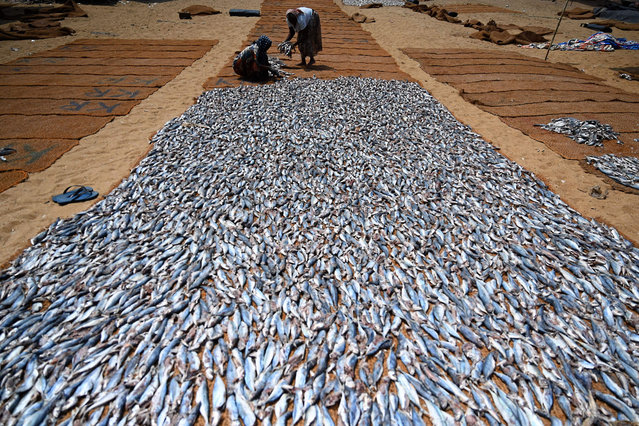 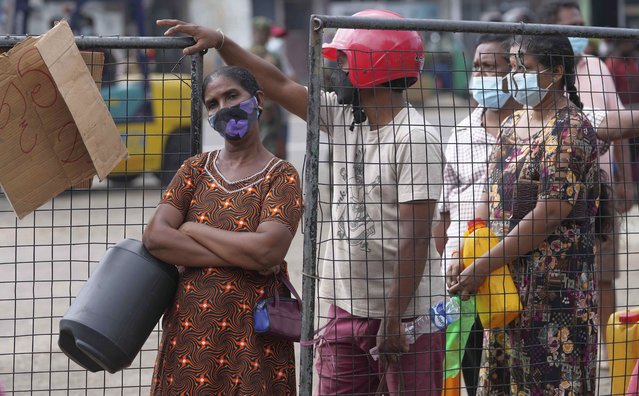 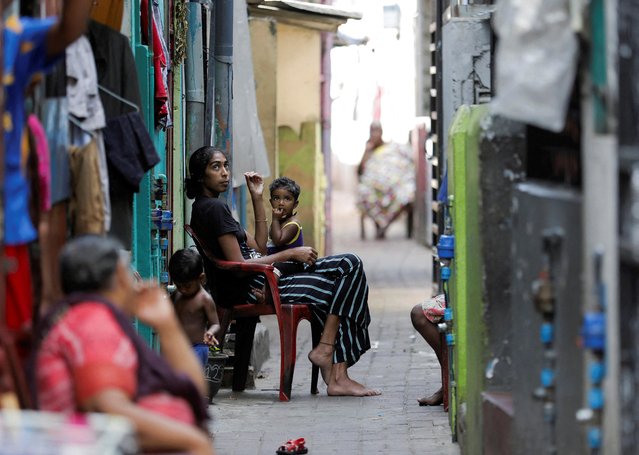 People sit outside to cool themselves from heat during the power cut as many parts of the country currently face long power cuts, as currency shortage makes fuel scarce, in Colombo, Sri Lanka on March 31, 2022. (Photo by Dinuka Liyanawatte/Reuters) 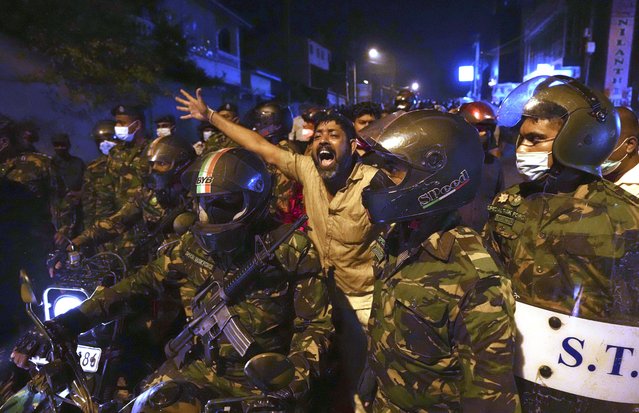 A Sri Lankan man shouts anti government slogans during a protest outside Sri Lankan president's private residence on the outskirts of Colombo, Sri Lanka, Thursday, March 31, 2022. Sri Lanka police fired tear gas and a water canon to disperse several hundred people protesting near the private residence of the country’s president. The people had gathered Thursday to protest the economic hardships faced by them. (Photo by Eranga Jayawardena/AP Photo) 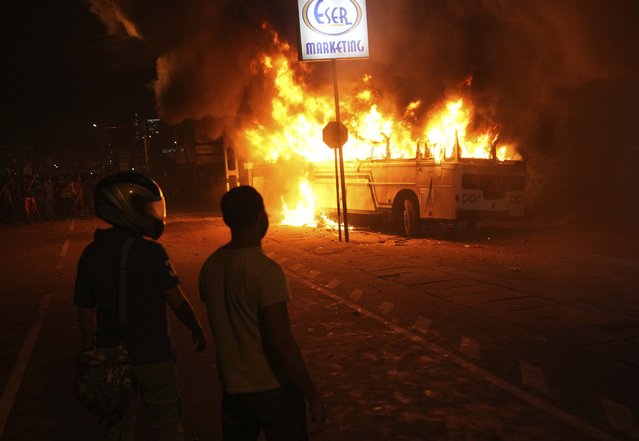 Sri Lankans watch after setting a bus on fire during a protest outside Sri Lankan president's private residence on the outskirts of Colombo, Sri Lanka, Friday, April 1, 2022. (Photo by Eranga Jayawardena/AP Photo) 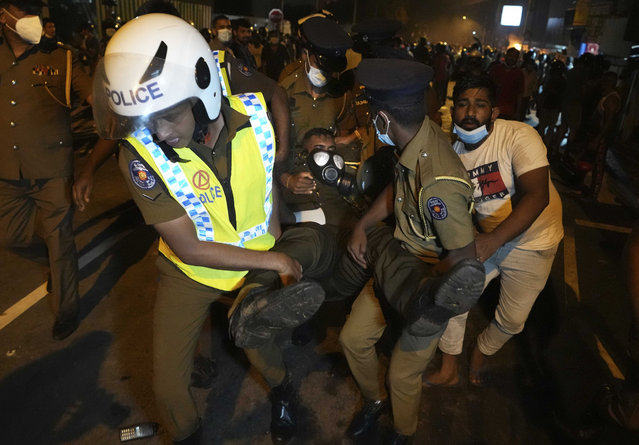