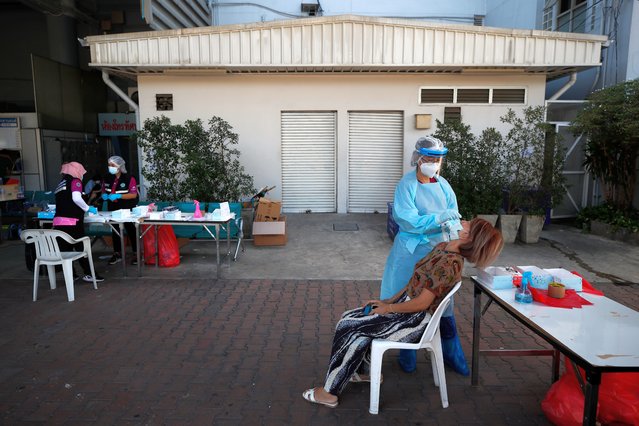 A traveler undergoes an antigen test for COVID-19 coronavirus after arriving at Mo Chit – Bangkok Bus Terminal, in Bangkok, Thailand, 03 January 2022. The Thai government has ordered state agencies' official and business firms' employees to work from home after the New Year holiday in a bid to contain the surge of COVID-19 coronavirus infections linked with the Omicron variant. (Photo by Diego Azubel/EPA/EFE) 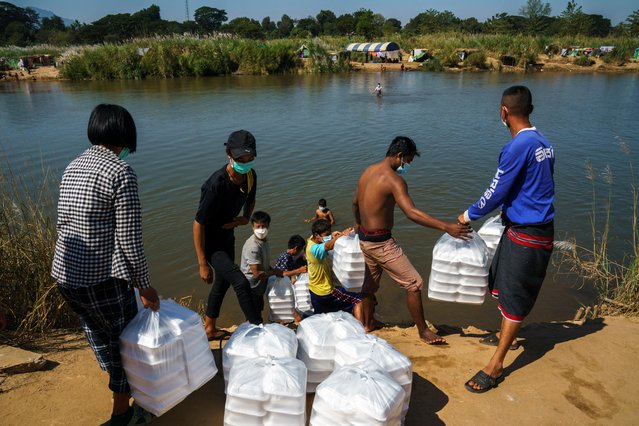 Refugees, who have fled a flare-up in fighting between the Myanmar army and insurgent groups and settled temporarily on the Moei River Bank, receive aid from Thailand on the Thai-Myanmar border, in Mae Sot, Thailand, January 7, 2022. (Photo by Athit Perawongmetha/Reuters) 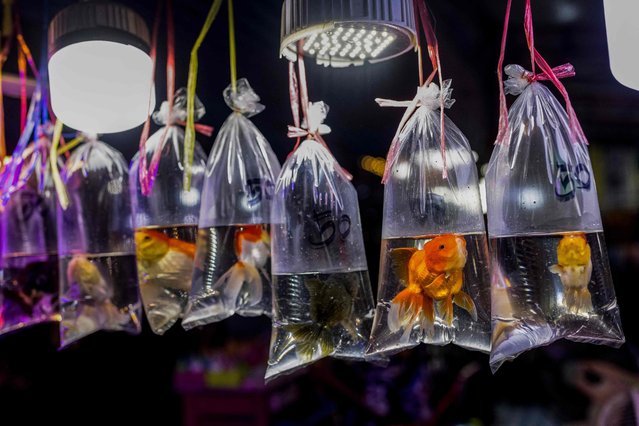 Gold fish for sale hang in plastic bags at a fun fair on Thailand's annual Children's Day in Bangkok on January 08, 2022. (Photo by Jack Taylor/AFP Photo) 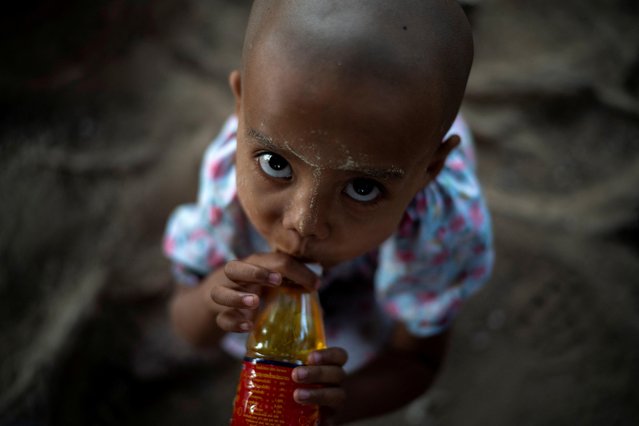 A migrant girl looks on at a village near the Thai-Myanmar border in Mae Sot, Thailand, January 7, 2022. (Photo by Athit Perawongmetha/Reuters) 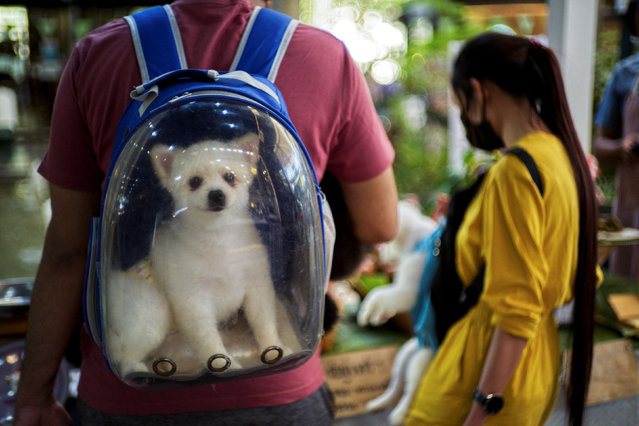 A dog inside a rucksack looks on at a shopping mall, in Bangkok, Thailand on January 9, 2022. (Photo by Athit Perawongmetha/Reuters) 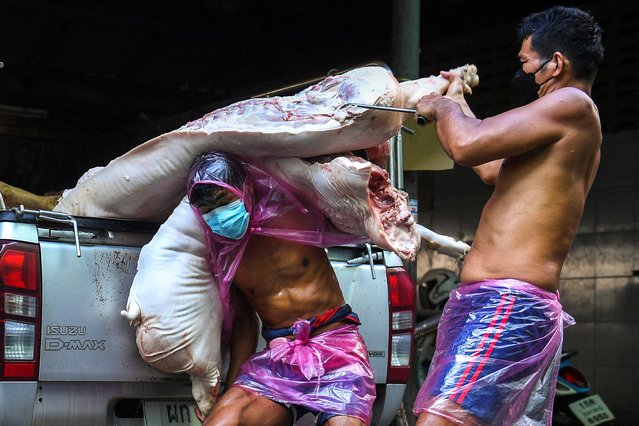 Butchers unload pieces of pork meat from a truck at a market as Thai authorities said on Tuesday that African swine fever had been detected in a surface swab sample collected at a slaughterhouse, in Bangkok, Thailand, January 11, 2022. (Photo by Chalinee Thirasupa/Reuters) 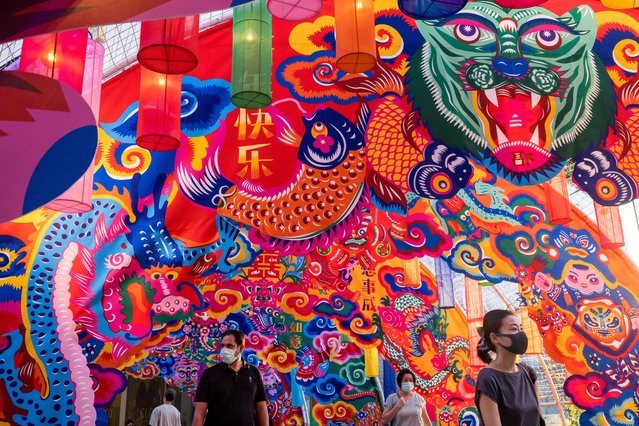 People walk below a festive tiger-themed display outside a shopping mall ahead of the Lunar New Year in Bangkok on January 14, 2022. (Photo by Jack Taylor/AFP Photo) 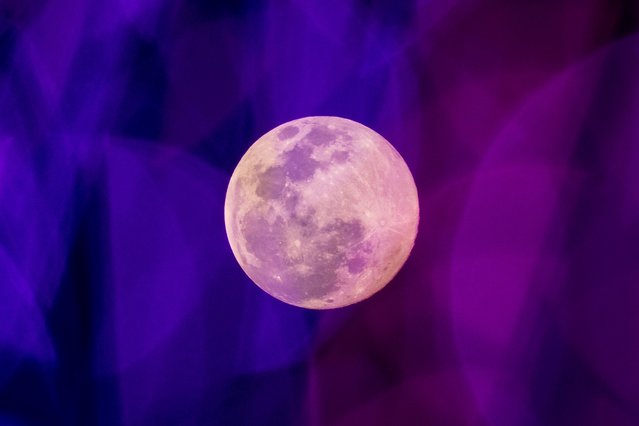 The Wolf Moon, the first full moon of the year, is pictured through coloured fairy lights hanging outside a shopping mall in Bangkok on January 17, 2022. (Photo by Jack Taylor/AFP Photo) 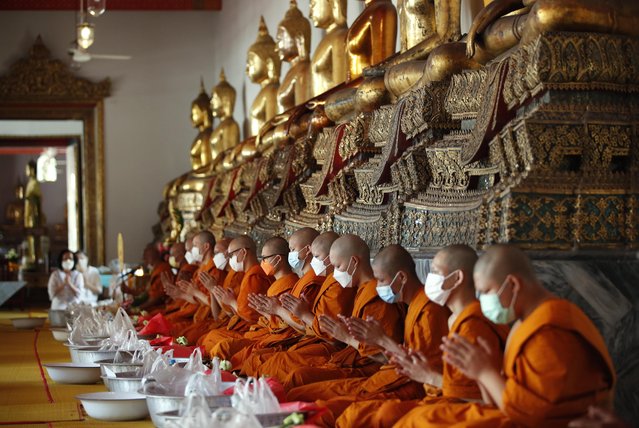 Thai Buddhist monks wear face masks and practice social distancing as they chant during a religious rite to mark Buddhist Sabbath Day at Wat Pho or Temple of the Reclining Buddha in Bangkok, Thailand, 17 January 2022. Thailand is battling with the new wave of COVID-19 driven by the Omicron variant of the Sars-Cov-2 virus with thousands of infections reported daily while the Public Health Ministry aims to make the COVID-19 pandemic to endemic status in 2022 because of the mild symptoms, lower death rate and the cooperated vaccination drive as part of the government's “living with COVID-19” strategy. (Photo by Rungroj Yongrit/EPA/EFE) 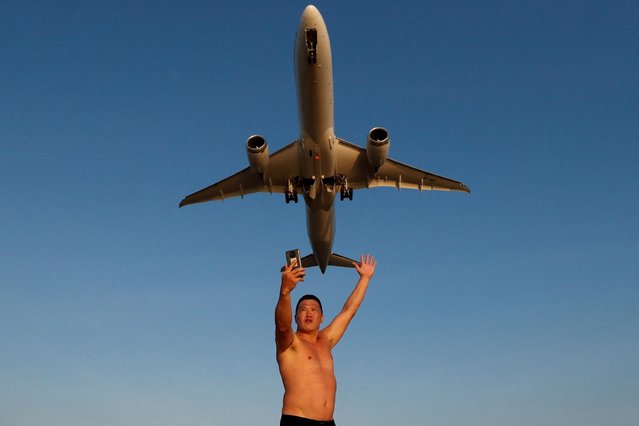 Ivan, a tourist from Russia, takes a selfie at Mai Khao Beach as a plane takes off from Phuket International Airport in Phuket, Thailand, January 17, 2022. (Photo by Jorge Silva/Reuters) 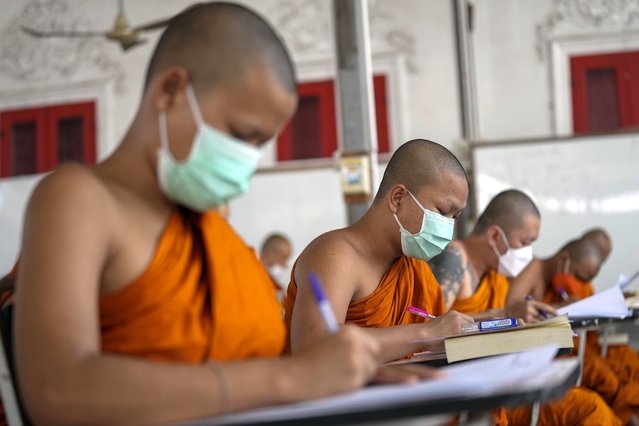 Buddhist monks wearing face masks to help protect themselves from the coronavirus, take a test for the liturgical Pali language at Wat Molilokayaram in Bangkok, Thailand, Thursday, January 20, 2022. (Photo by Sakchai Lalit/AP Photo) 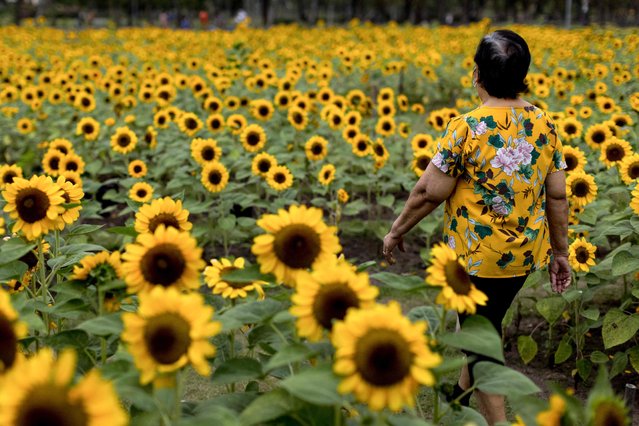 A woman walks through a sunflower field at Wachirabenchathat Park in Bangkok on January 20, 2022. (Photo by Jack Taylor/AFP Photo) 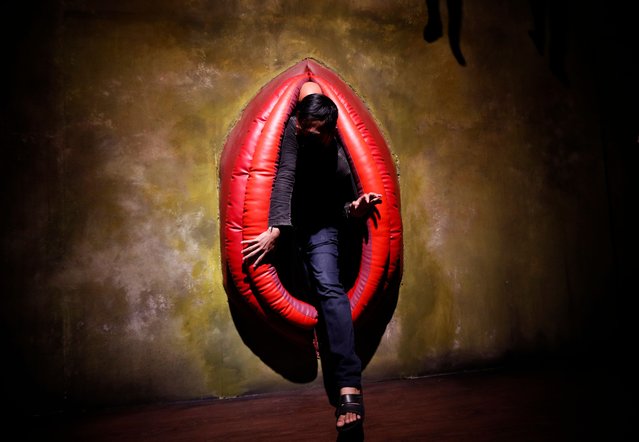 A visitor “experiences” being born in the exhibition “Birth, Elder, Painful and Death” at Kid Mai Death Awareness Cafe in Bangkok, Thailand, 21 January 2022. The Kid Mai Death Awareness themed cafe offers customers to acknowledge the Buddha teaching concept of birth, aging, sickness and death by experiencing birth feel in a mock up mother's womb, feeling aging with a blur glasses, learn the painful of sickness on a patient bed of a mock up hospital Intensive Care Unit and being dead by lying inside a coffin and focus the last breath with the last will to recognize the inescapable realities of life to remind and warning visitor about the value of fleeting life and death. (Photo by Rungroj Yongrit/EPA/EFE) 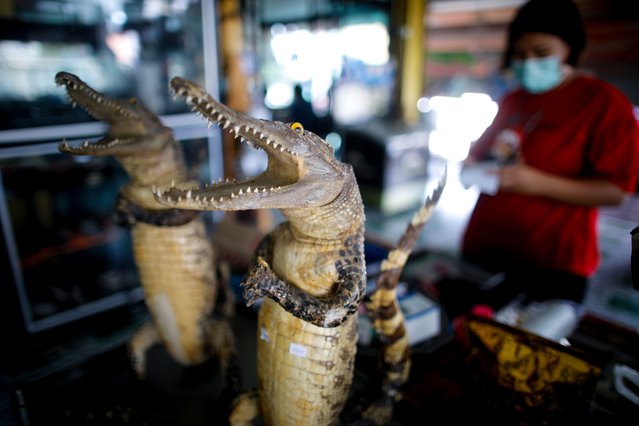 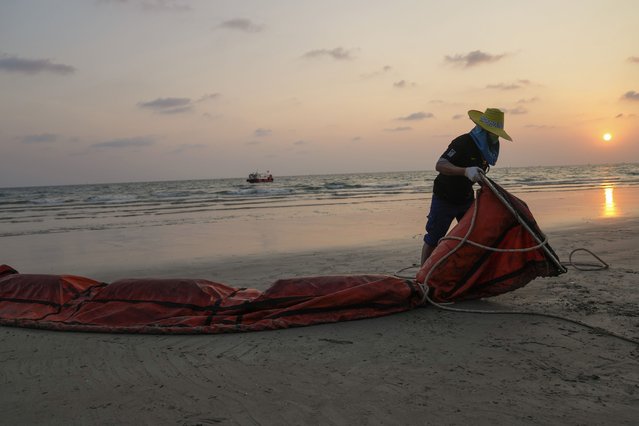 A worker prepares an oil spill boom on Mae Ram Phueng Beach in hopes of containing any oil washing ashore from a recent spill off the coast of Rayong, eastern Thailand, Friday, January 28, 2022. An oil slick off the coast of Thailand continued to expand Friday and was approaching beaches on the east coast, home to fragile coral and seagrass, officials said. (Photo by Sakchai Lalit/AP Photo) 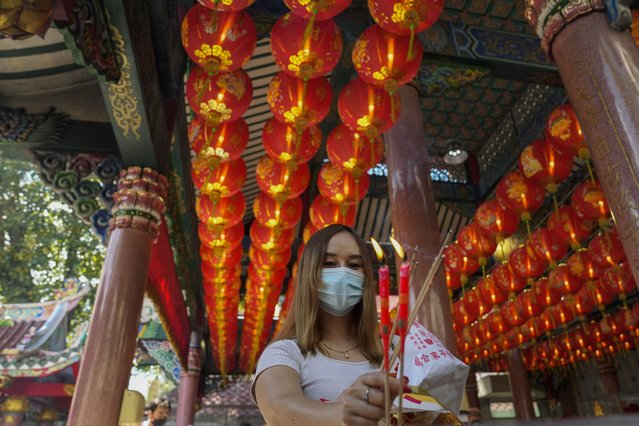 A woman holds joss sticks praying for good fortune on the eve of the Lunar New Year at Tai Hong Kong Shrine in Bangkok, Thailand, Monday, January 31, 2022. The new year celebrations according to the lunar calendar will take place on Feb. 1. (Photo by Sakchai Lalit/AP Photo) 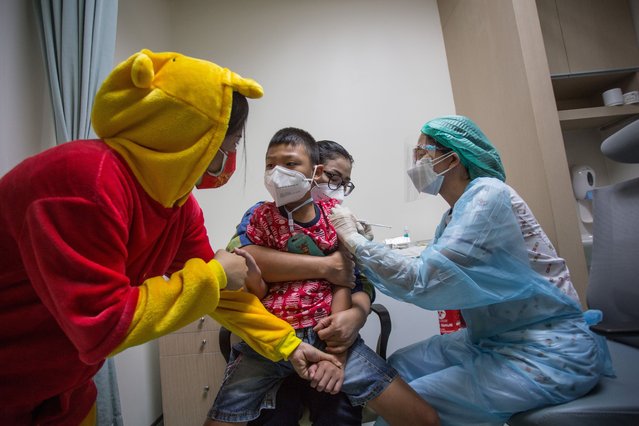 A health worker administers a dose of Covid-19 Pfizer pediatric vaccine to a boy in Bangkok on January 31, 2022. Thailand has started vaccinating children aged 5-11 years to prevent the spread of coronavirus COVID-19 at Queen Sirikit National Institute Of Child Health in Bangkok. (Photo by Adisorn Chabsungnoen/SOPA Images/Rex Features/Shutterstock) 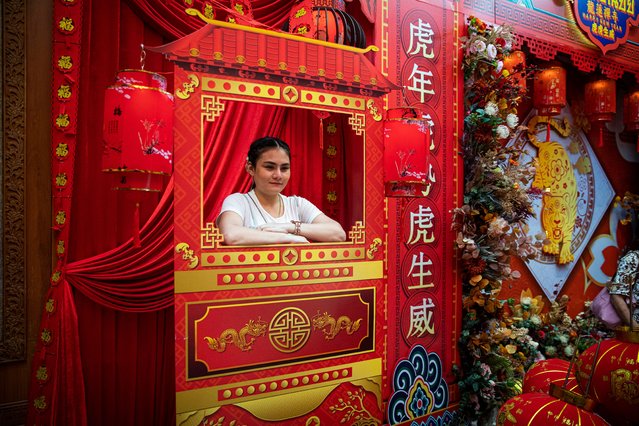 A Thai worshipper poses for a photo at Wat Mangkon on January 31, 2022 in Bangkok, Thailand. Due to the rise in COVID-19 cases, the Bangkok Metropolitan Administration officially cancelled all public celebrations during the Chinese Lunar New Year. However, Thai people continue to celebrate on in Bangkok's Chinatown at Chinese temples and Yaowarat Walking Street. (Photo by Lauren DeCicca/Getty Images) 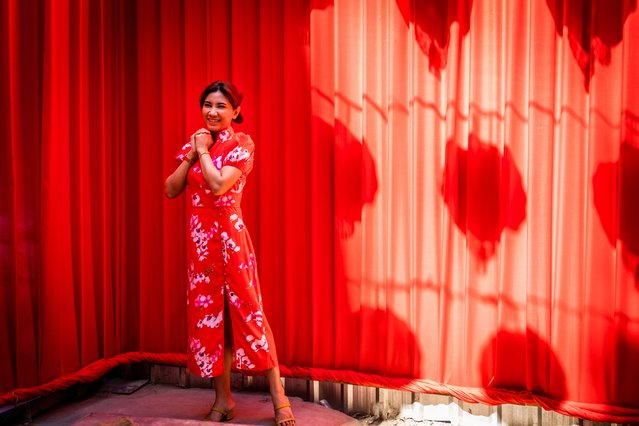 A woman poses for a photo in traditional Chinese clothing at a temple in Bangkok's Chinatown on the first day of the Lunar New Year on January 31, 2022. Although official celebrations of the 2022 Lunar New Year were canceled to prevent the spread of COVID-19, people gather around Yaowarat Road (Chinatown) in Bangkok to pray and socialize to mark the start of the Year of the Tiger. (Photo by Matt Hunt/SOPA Images/Rex Features/Shutterstock)
Edit Del
17 Feb 2022 05:47:00, post received 0 comments
Publication archive:
←   →
Popular tags:
All tags
Last searches: