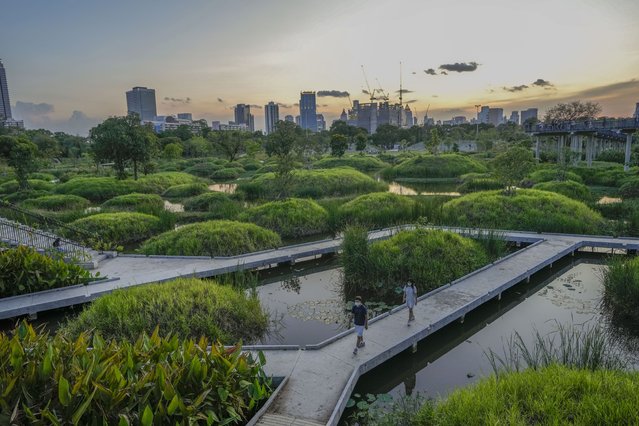 People walk on a path running through Benjakitti Park in Bangkok, Thailand, Friday, April 1, 2022. Bursting with trees, ponds, plants and birdlife, a new inner-city park is delighting residents of Thailand’s bustling, congested capital. Every day, crowds visit Benjakitti Forest Park to savor a taste of nature in the heart of Bangkok. (Photo by Sakchai Lalit/AP Photo) 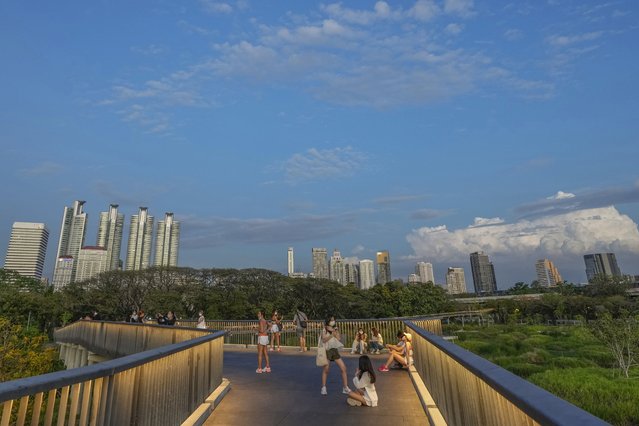 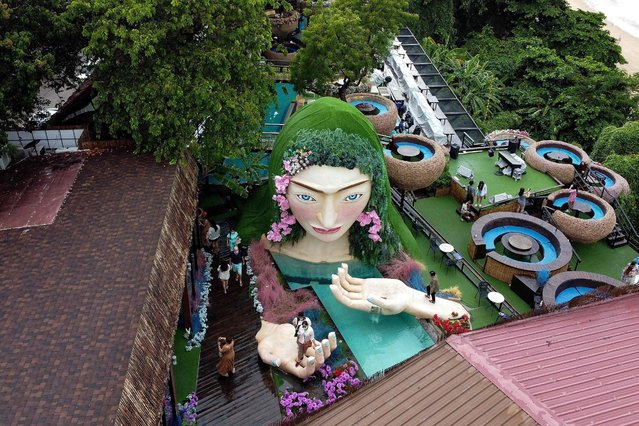 Visitors pose for photographs at the “3 Mermaids” cafe, a popular Instagrammable spot in Pattaya City on May 8, 2022 (Photo by Manan Vatsyayana/AFP Photo) 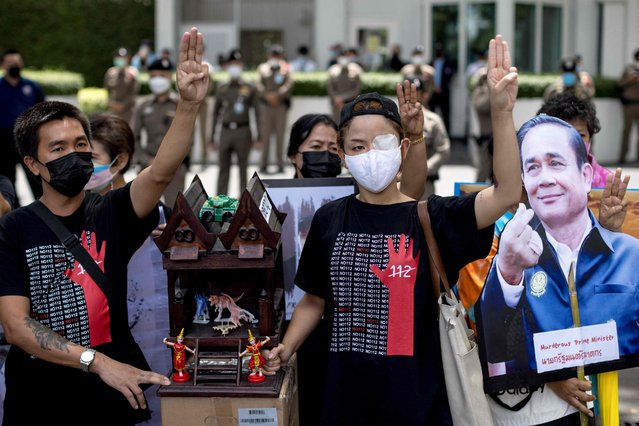 Protesters flash three-finger salutes during a demonstration calling for the release of prisoners charged under article 112, Thailand's lese majeste royal defamation law, outside the US embassy in Bangkok on May 10, 2022, ahead of a US-Association of Southeast Asian Nations (ASEAN) summit in Washington. (Photo by Jack Taylor/AFP Photo) 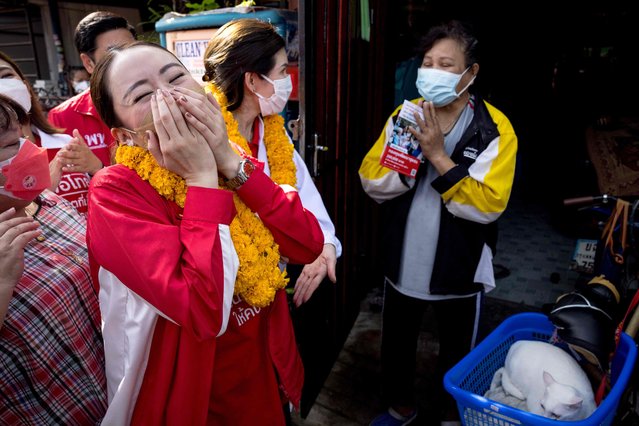 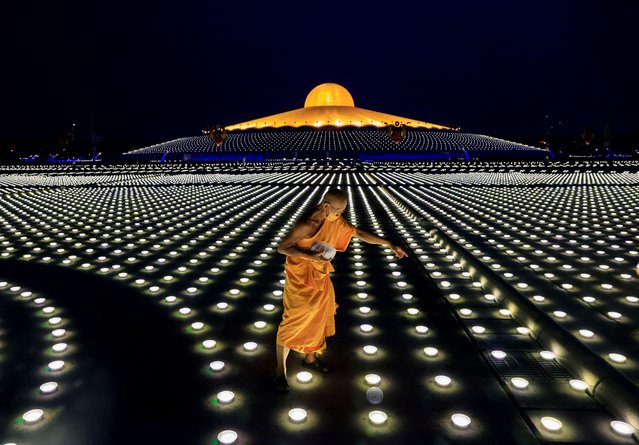 A Buddhist monk places the LED lights to form an image of the Lord Buddha, as people observe Vesak Day, an annual celebration of Buddha's birth, enlightenment and death, at Dhammakaya Temple, Pathum Thani, near Bangkok, Thailand on May 15, 2022. (Photo by Soe Zeya Tun/Reuters) 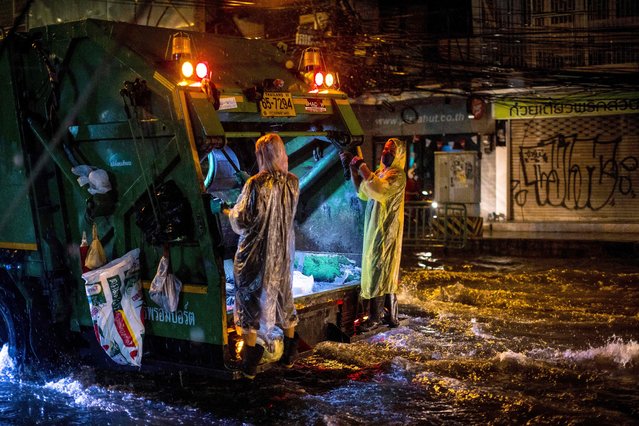 Waste disposal workers wear ponchos as they ride down a flooded street after heavy rain in Bangkok on May 18, 2022. (Photo by Jack Taylor/AFP Photo) 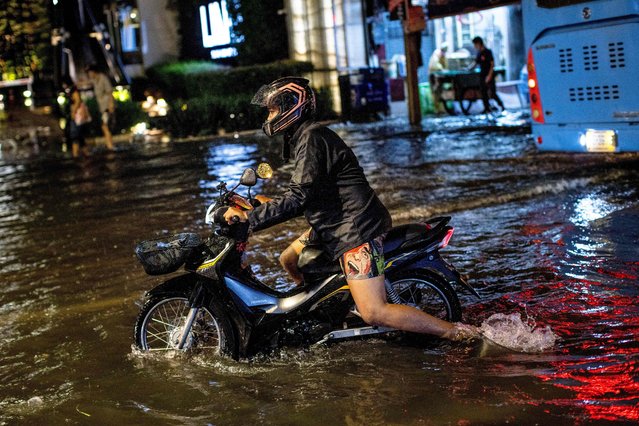 Street after heavy rain in Bangkok on May 18, 2022. (Photo by Jack Taylor/AFP Photo) 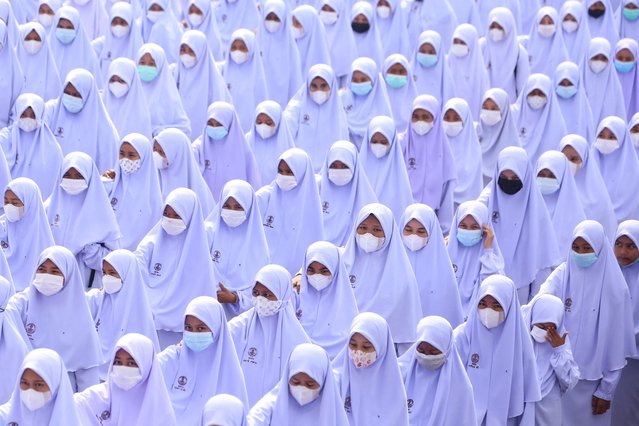 Muslim students line up in the courtyard before the first day of school at the Darunsat Wittaya School in southern Thailand's Pattani province on May 22, 2022, as schools reopen across the country after almost two years of closure due to the Covid-19 coronavirus. (Photo by Tuwaedaniya Meringing/AFP Photo) 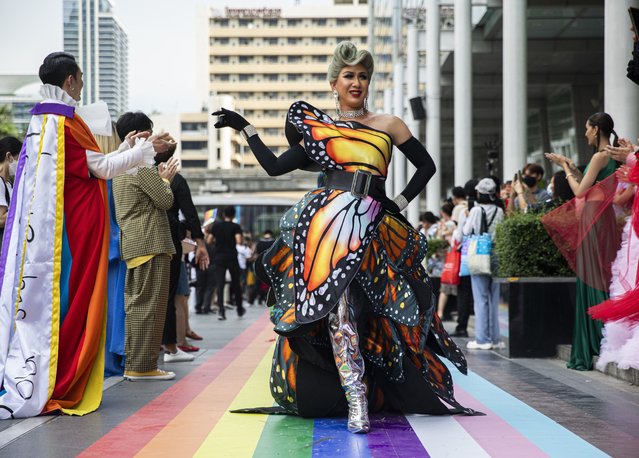 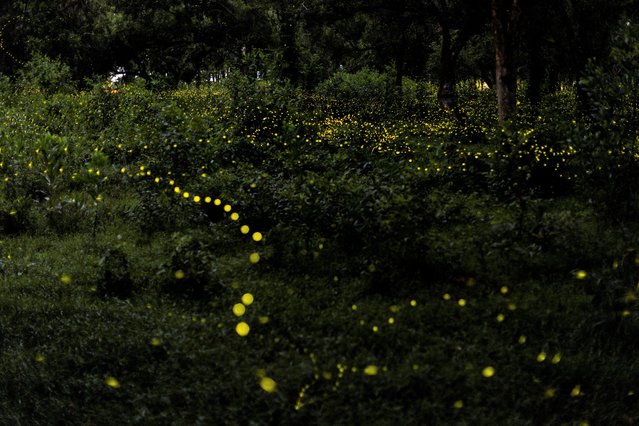 Fireflies light up in a forest at a military barrack in Prachin Buri province, Thailand, June 4, 2022. (Photo by Athit Perawongmetha/Reuters) 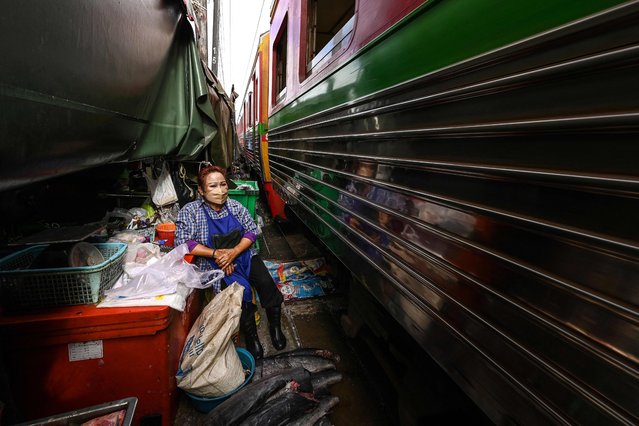 This photograph taken on June 4, 2022 shows fish vendor Somporn Thathom sitting at her stall as a passenger train passes through the Mae Klong railway market in Samut Songkhram province, around 80 kms (50 miles) southwest of Bangkok. Six times a day at the market, local customers and foreign tourists scramble into nooks and crannies while vendors calmly move their woven baskets of goods away from the tracks and close their umbrellas. (Photo by Manan Vatsyayana/AFP Photo) 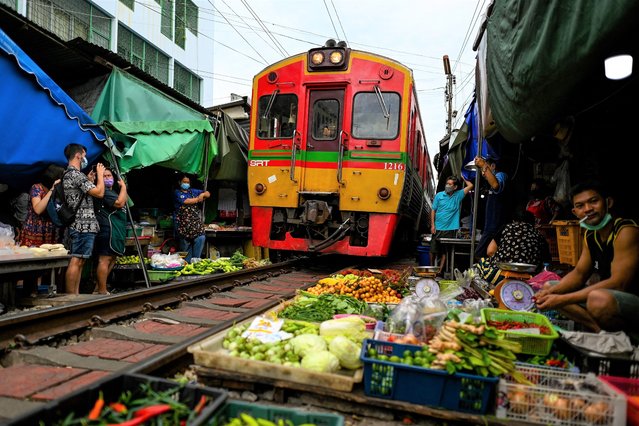 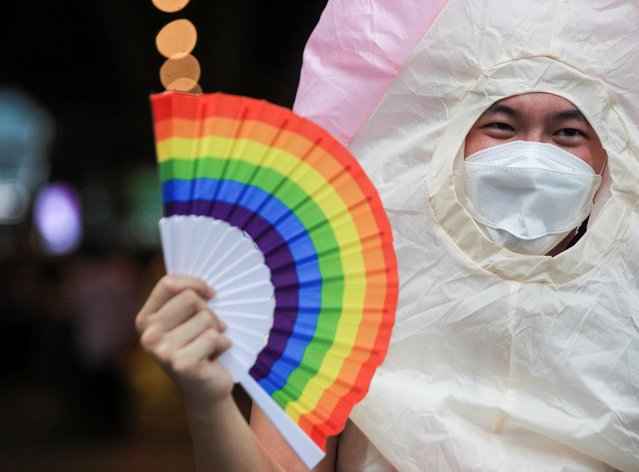 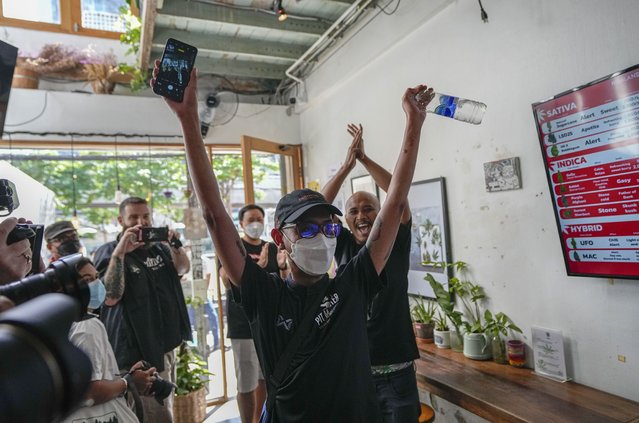 The first customer of the day, Rittipomng Bachkul celebrates after buying legal marijuana at the Highland Cafe in Bangkok, Thailand, Thursday, June 9, 2022. Measures to legalize cannabis became effective Thursday, paving the way for medical and personal use of all parts of cannabis plants, including flowers and seeds. (Photop by Sakchai Lalit/AP Photo) 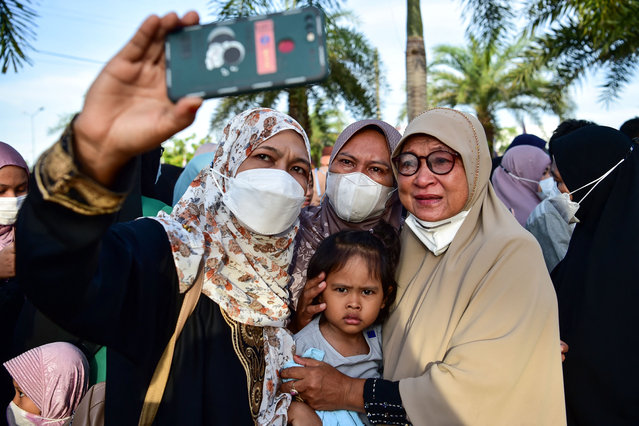 People pose for a group photo before sending off their relatives, heading to Mecca in Saudi Arabia for the annual Hajj pilgrimage, from the Narathiwat provincial airport in southern Thailand on June 10, 2022. (Photo by Madaree Tohlala/AFP Photo) 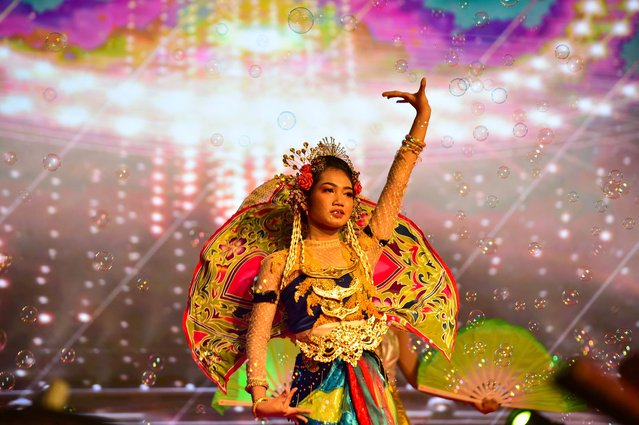 In this picture taken on July 10, 2022, a performer dances during the opening of the Red Cross Festival in southern Thailand's Narathiwat province. (Photo by Madaree Tohlala/AFP Photo) 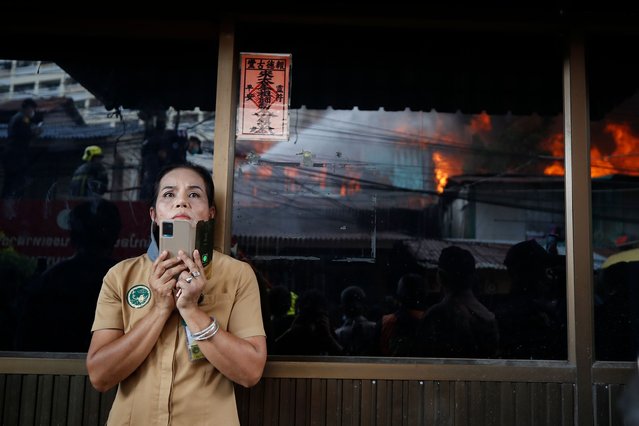 A woman watches Thai firefighters put out a fire that broke out at a house in central Bangkok, Thailand, 21 June 2022. According to local residents, the fire broke out at a wooden home which soon spread to neighboring residences. Firefighters at the scene said that the fire destroyed at least 10 homes in the Bon Kai community, and fortunately there were no casualties. A member of the fire brigade received a minor injury to his leg while attempting to put out the fire, and was quickly helped out by fellow firefighters.The exact cause of the fire was still being investigated. (Photo by Diego Azubel/EPA/EFE/Rex Features/Shutterstock) 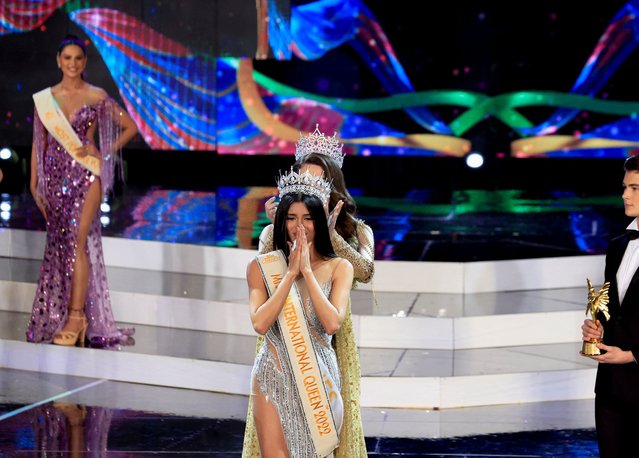 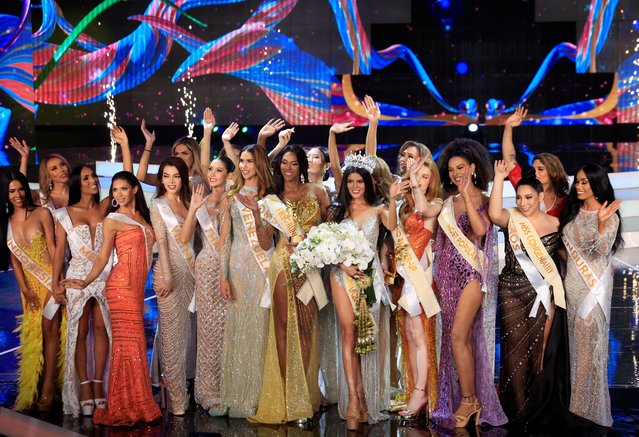