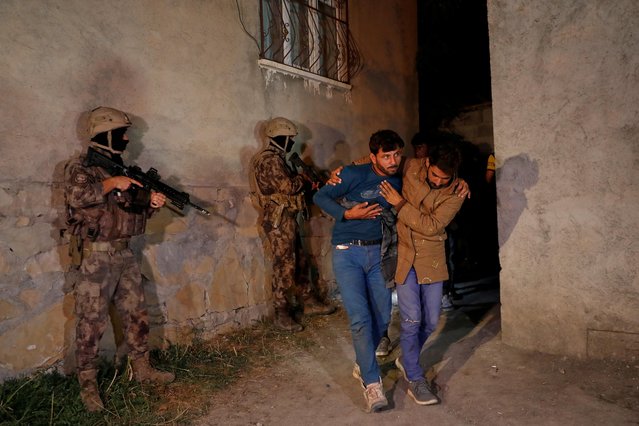 Migrants, mainly from Afghanistan, are seen after they were detained by Turkish security forces during an operation in the border city of Van, Turkey late August 21, 2021. Afghans who manage to make the weeks-long journey through Iran on foot to the Turkish border face a three-meter high wall, ditches or barbed wire as Turkish authorities step up efforts to block any refugee influx into the country. (Photo by Murad Sezer/Reuters) 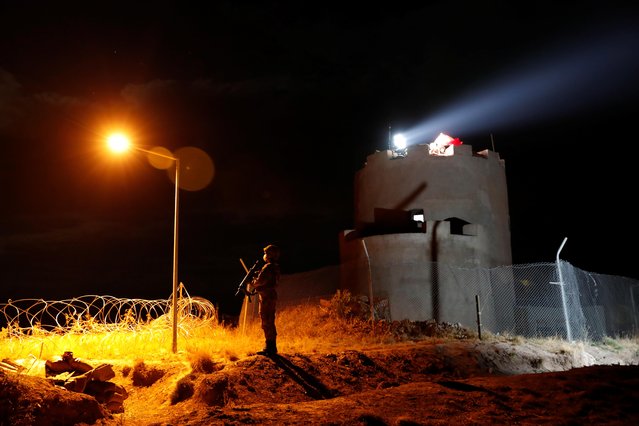 Turkish soldiers stand guard at a military post on the Turkish-Iranian border in Van province, Turkey late August 21, 2021. Authorities plan to add another 64 km by the end of the year to a border wall started in 2017. Ditches, wire and security patrols around the clock will cover the rest of the 560 km frontier. (Photo by Murad Sezer/Reuters) 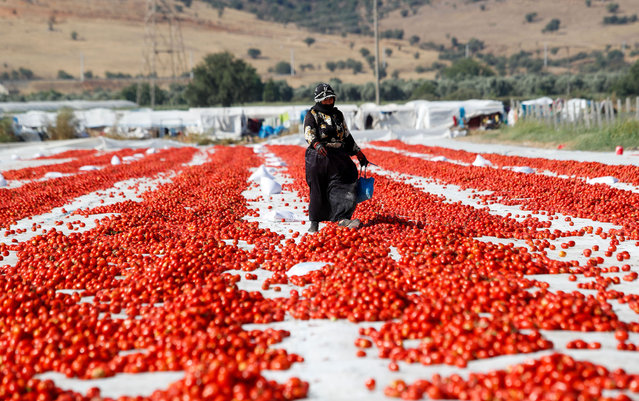 A view of a field where tomatoes left for drying in the sun as seasonal workers process tomatoes after a harvest in Torbali district of Izmir, Turkey on August 17, 2021. Tomatoes, collected by seasonal workers, are loaded onto trucks and tractors and transported to the processing fields, where massive white plastics are laid on the ground. Salted tomatoes are cut in half and left to dry in the sun. (Photo by Halil Fidan/Anadolu Agency via Getty Images) 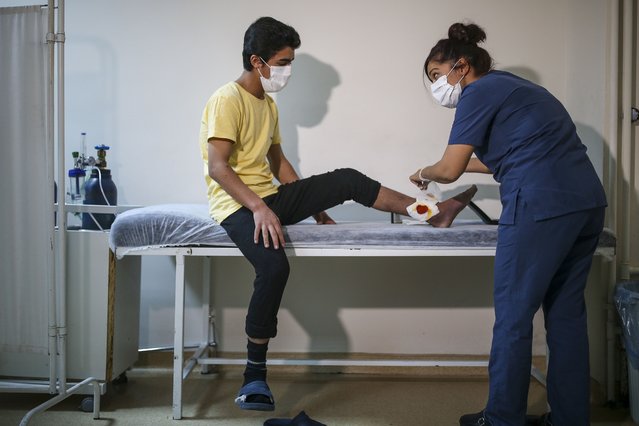 Murad Majidi, 17, an Afghan migrant who was wounded in the border crossing and saved by Turkish soldiers after being abandoned by his friends, receives treatment, at a deportation center in the Turkish city of Van that borders Iran, Monday, August 23, 2021. Traffic on this key migration route from central Asia to Europe has remained relatively stable compared to previous years. But European countries, as well as Turkey, fear the sudden return of Taliban rule in Afghanistan could change that. (Photo by Emrah Gurel/AP Photo) 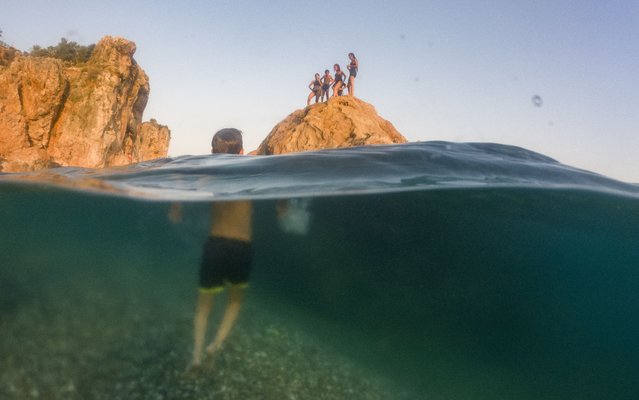 Boys jump to sea from a rock as people enjoy the sunny day at a beach in Antalya, Turkey on August 24, 2021. Number of tourists coming to Antalya has approached 5 million. (Photo by Mustafa Ciftci/Anadolu Agency via Getty Images) 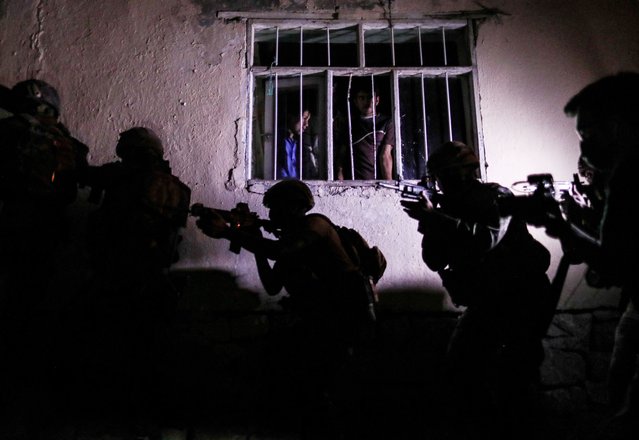 Turkish SWAT members starting an operation to stop the human trafficking and raid the houses used by the smugglers as secret houses in the​ border city of Van, Turkey, 25 August 2021. (Photo by Sedat Suna/EPA/EFE) 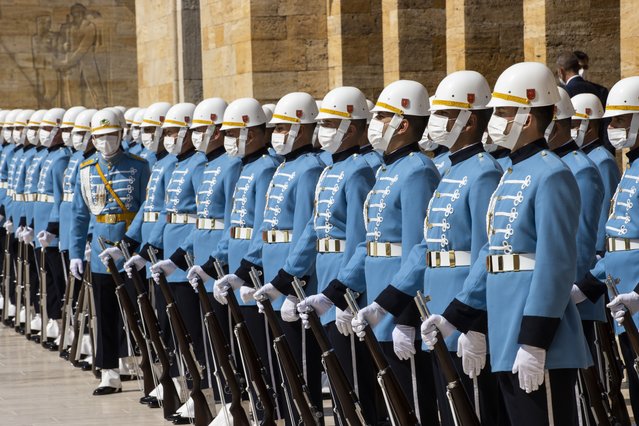 Honor guards wear face masks as they are lined up according to the social distancing rules due to the coronavirus (COVID-19) pandemic during a celebration marking the 99th Anniversary of Turkeyâs Victory Day at Anitkabir, mausoleum of Turkish Republic founder Mustafa Kemal Ataturk in Ankara, Turkey on August 30, 2021. (Photo by Aytac Unal/Anadolu Agency via Getty Images) 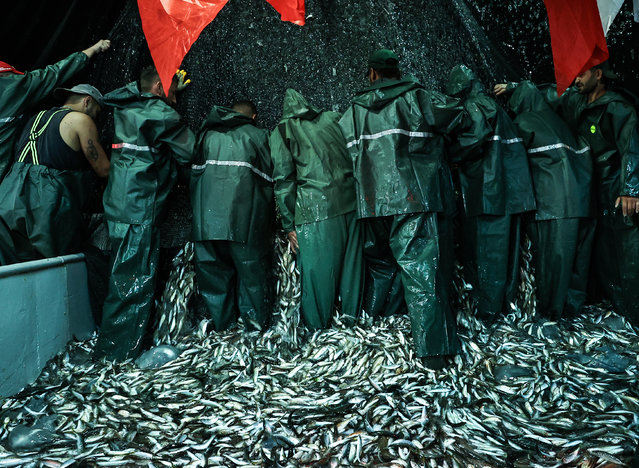 Fishermen are seen with fish on a boat during the first day of fishing season in Istanbul, Turkey on September 01, 2021. (Photo by Islam Yakut/Anadolu Agency via Getty Images) 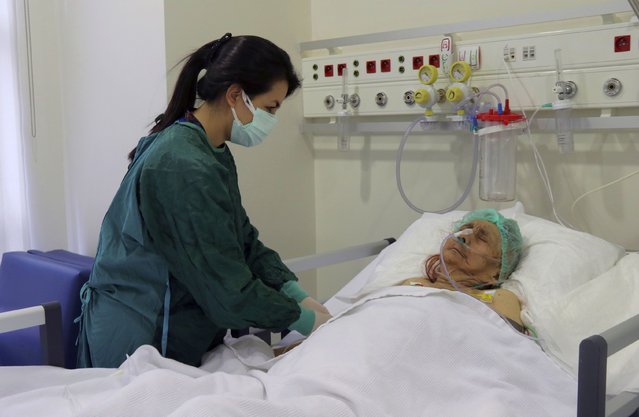 A nurse monitors Ayse Karatay at the City Hospital in Eskisehir, western Turkey, Saturday, September 4, 2021. Karatay, a 116-year-old Turkish woman has survived COVID-19, her son said Saturday, making her one of the oldest patients to beat the disease. Ayse Karatay spent three weeks in intensive care and has now been moved to a normal ward, her son Ibrahim Karatay told the Demiroren news agency. (Photo by IHA via AP Photo) 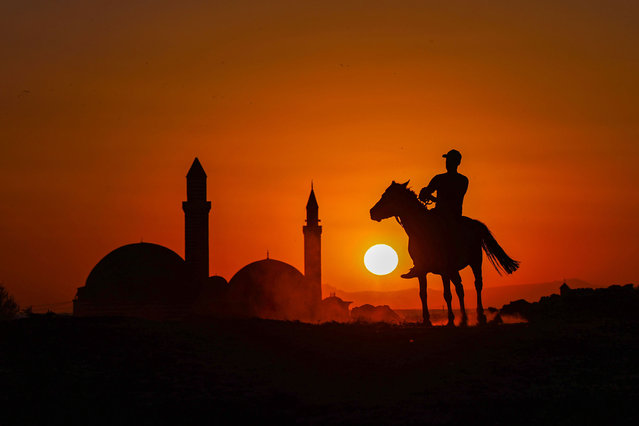 A silhouette of a mounted man near Kaya Celebi and Husrev Pasha Mosques located at the south of Van Castle during sunset in Van, Turkey on September 06, 2021. (Photo by Ozkan Bilgin/Anadolu Agency via Getty Images) 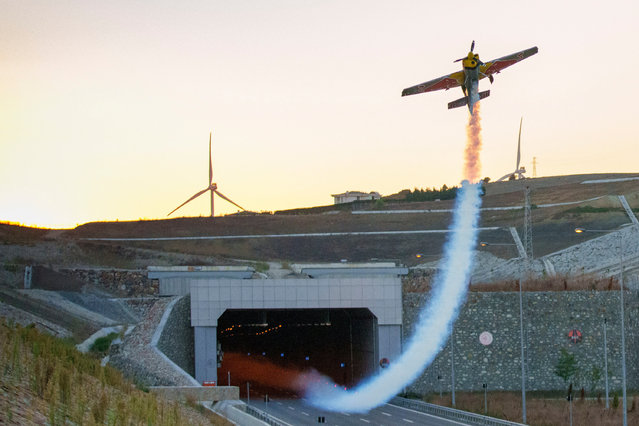 A handout photo made available by the Red Bull Press Office shows Italian pilot Dario Costa in action as he flying through the Catalca Tunnel in Istanbul, Turkey, 04 September 2021. Costa set a new world record for the longest tunnel flown through with an aeroplane marking 1,610 metres. (Photo by Nuri Yilmazer Handout/Rex Features/Shutterstock) 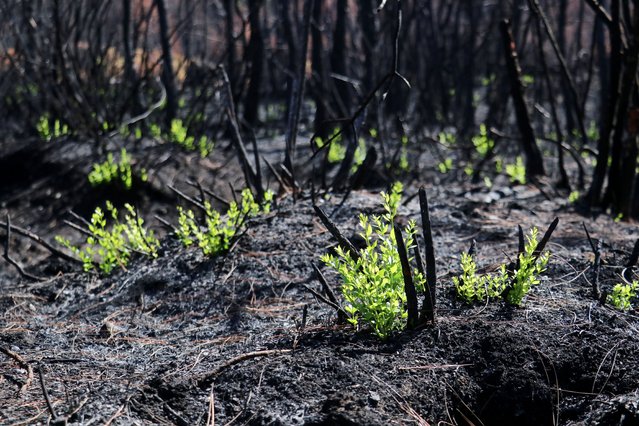 Plants begin to grow again after forest fire in Turkey's Osmaniye on September 03, 2021. Losses from the forest fire amounted 15 hectares, which began on July 28th and taken under control on the fourth day. (Photo by Muzaffer Cagliyaner/Anadolu Agency via Getty Images) 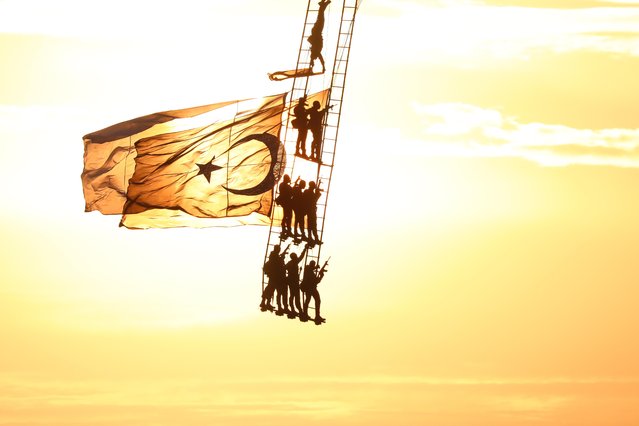 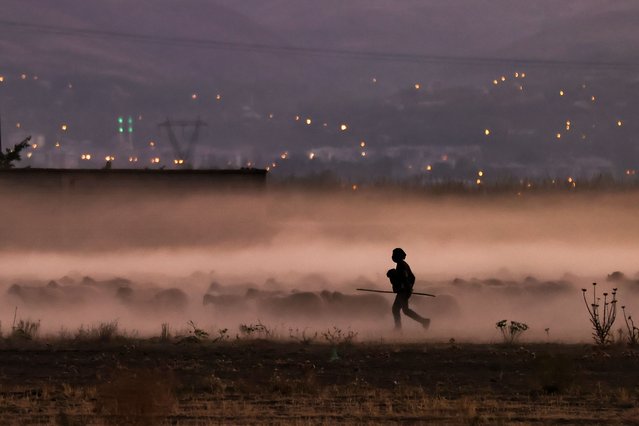 A breeder leads a flock of sheep back home in Gevas district of Turkey's southeastern province Van on September 11, 2021. Breeders travelled long distances searching for decent pastures in rural areas of Van province. They are days ahead before reaching back home. (Photo by Ozkan Bilgin/Anadolu Agency via Getty Images) 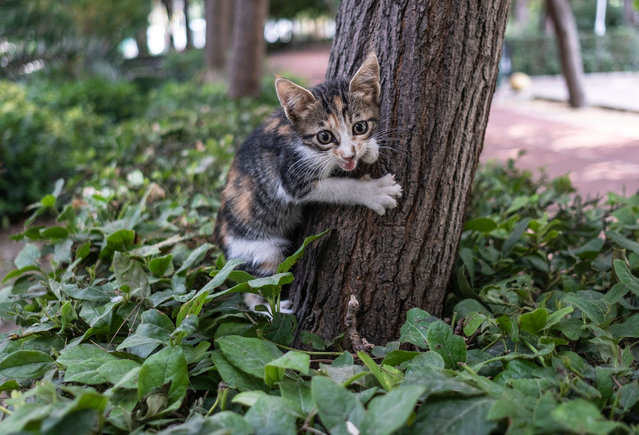 A kitten clings to a tree at a stray animal shelter at Izmir International Fair park in Alsancak, Turkey on September 14, 2021. (Photo by Uygar Ozel/ZUMA Press Wire/Rex Features/Shutterstock) 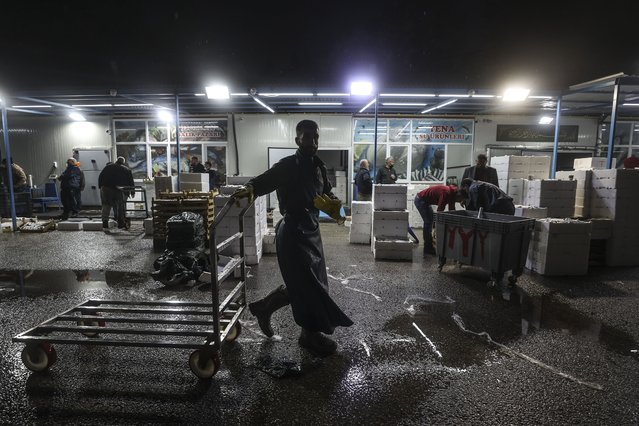 Fishers prepare market stalls in the late night as people show great interest after the beginning of fishing season at the fish market in Ankara, Turkey on September 17, 2021. A wide range of fishes such as anchovies, horse mackerel, red mullet, bonito, tabby, haddock, trout, sea bream, sea bass and sardines are sold in the market. (Photo by Esra Hacioglu/Anadolu Agency via Getty Images) 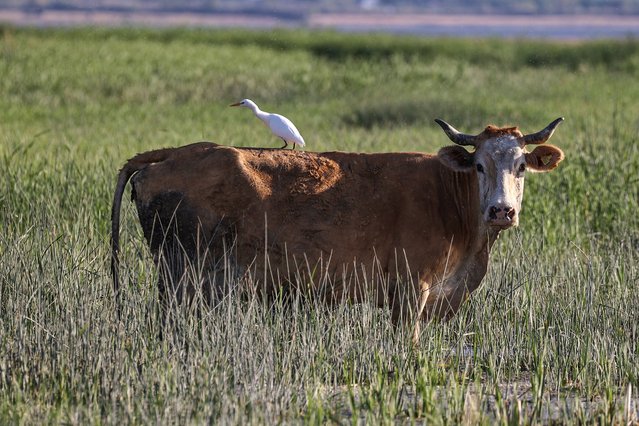 A cattle heron sits on the back of a cattle taken out for grazing amid reed field near Lake Van in Kosk neighbourhood of Edremit district, Van province, Turkey on September 18, 2021. (Photo by Ozkan Bilgin/Anadolu Agency via Getty Images) 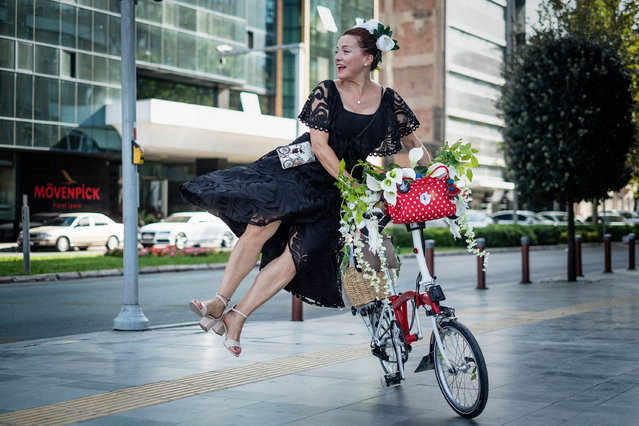 A woman dismounts from her bicycle during the women themed World Car Free Day in Izmir, Turkey on September 19, 2021. The event was held to draw attention to the World Car Free Day Fancy Women Bike Ride. (Photo by Uygar Ozel/ZUMA Press Wire/Rex Features/Shutterstock) 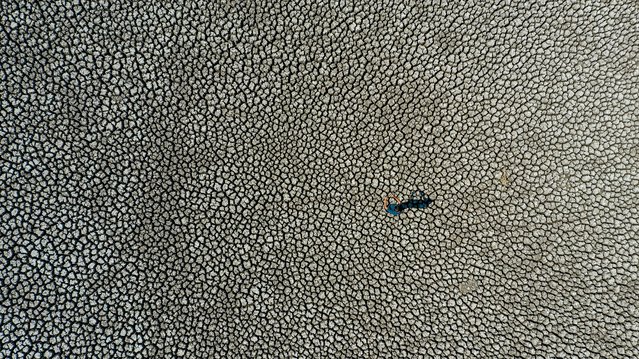 A drone photo shows an aerial view of the Devegecidi Dam Lake which is in danger of drought due to the climate change in Diyarbakir, Turkey on September 21, 2021. While migratory birds try to find food in the muddy ground on the lake, endemic plants and animals are in struggle in their natural habitats. (Photo by Bestami Bodruk/Anadolu Agency via Getty Images) 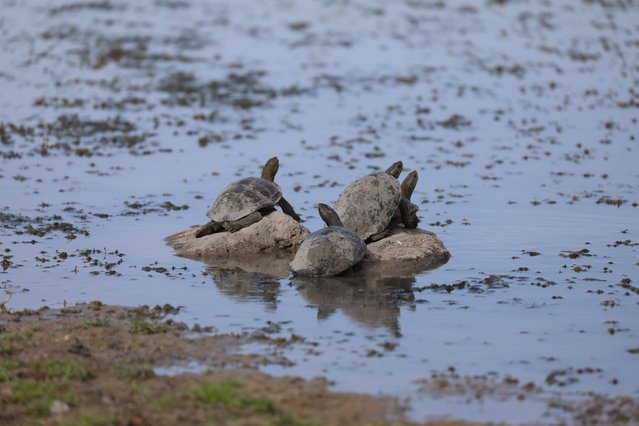 Turtles are seen near the shore of the Devegecidi Dam Lake, which is in danger of drought due to the climate change, in Diyarbakir, Turkey on September 21, 2021. While migratory birds try to find food in the muddy ground on the lake, endemic plants and animals are in struggle in their natural habitats. (Photo by Bestami Bodruk/Anadolu Agency via Getty Images)
Edit Del
06 Oct 2021 07:48:00, post received 0 comments
Publication archive:
←   →
Popular tags:
All tags
Last searches: