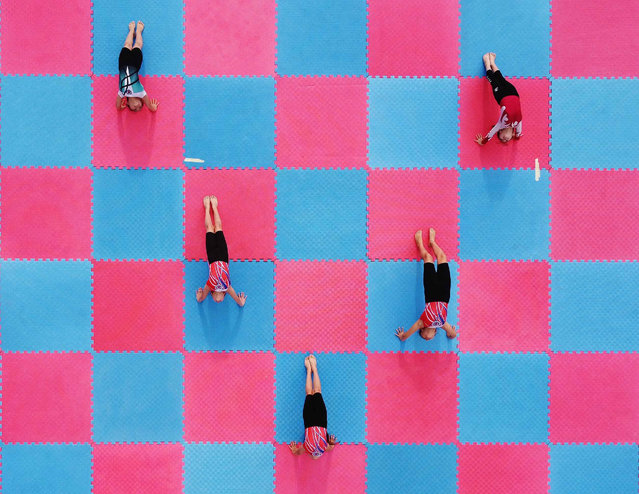 An aerial view of Turkish kids performing at a ceremony marking the 97th Anniversary of Republic Day of Turkey on October 29, 2020 at City Square in Karabuk, Turkey. (Photo by Ahmet Ozler/Anadolu Agency via Getty Images) 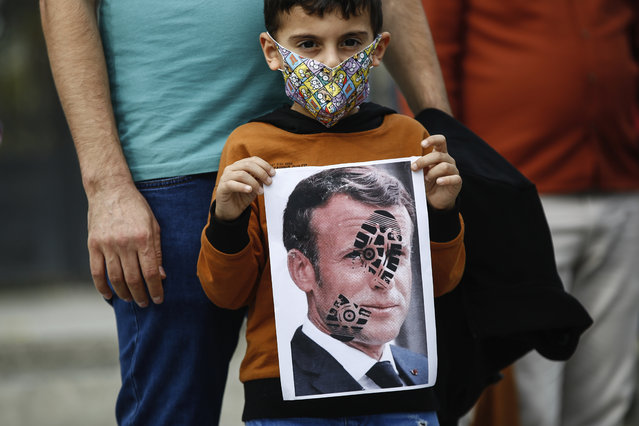 A child holds a photograph of France's President Emmanuel Macron, stamped with a shoe mark, during a protest against France in Istanbul, Sunday, October 25, 2020. Turkish President Recep Tayyip Erdogan on Sunday challenged the United States to impose sanctions against his country while also launching a second attack on French President Emmanuel Macron. Speaking a day after he suggested Macron needed mental health treatment because of his attitude to Islam and Muslims, which prompted France to recall its ambassador to Ankara, Erdogan took aim at foreign critics. (Photo by Emrah Gurel/AP Photo) 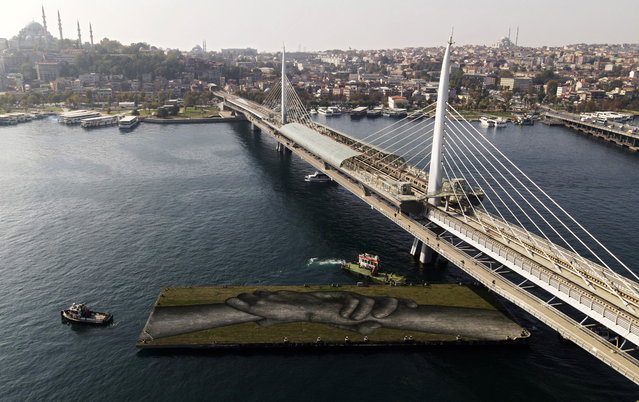 An aerial view shows an artwork by French-Swiss street artist Saype called “Beyond Walls” on a floating barge over the Golden Horn in Istanbul, Turkey October 23, 2020. The art pieces created by Saype in Istanbul are the eighth step of a project to create a spray-painted “human chain” across the world to encourage humanity and equality. (Photo by Murad Sezer/Reuters) 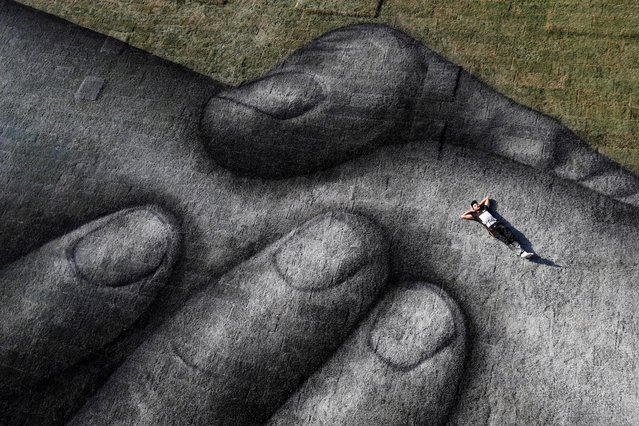 French-Swiss street artist Saype poses as he works on his artwork on a floating barge over the Golden Horn in Istanbul, Turkey on October 23, 2020, as part of the “Beyond Walls” project to create a spray-painted “human chain” across the world to encourage humanity and equality. (Photo by Murad Sezer/Reuters) 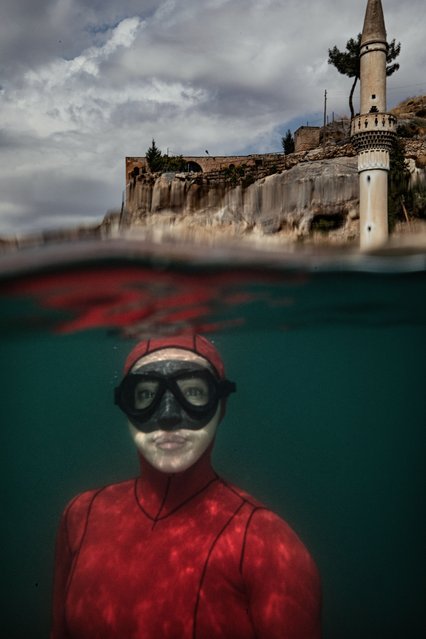 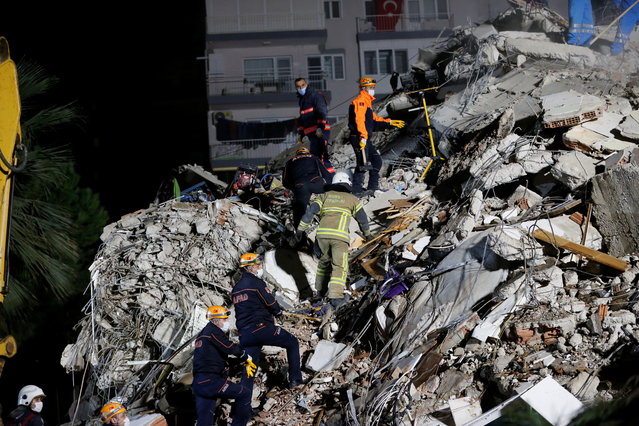 Rescue operations take place on a site after an earthquake struck the Aegean Sea, in the coastal province of Izmir, Turkey, October 31, 2020. (Photo by Kemal Aslan/Reuters) 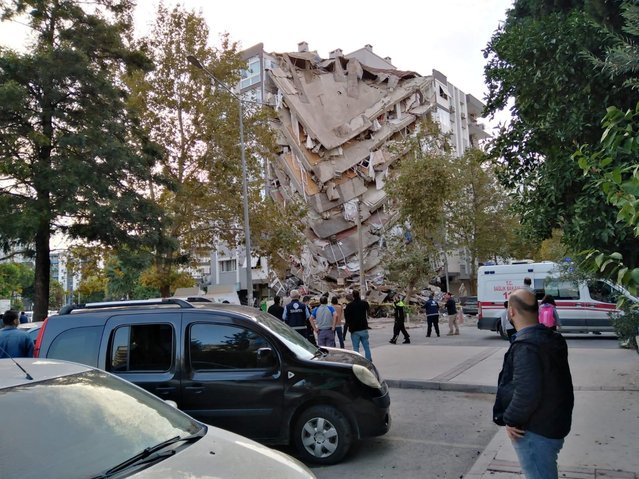 Locals look at a damaged building after a strong earthquake struck the Aegean Sea on Friday and was felt in both Greece and Turkey, where some buildings collapsed in the coastal province of Izmir, Turkey, October 30, 2020. (Photo by Tuncay Dersinlioglu/Reuters) 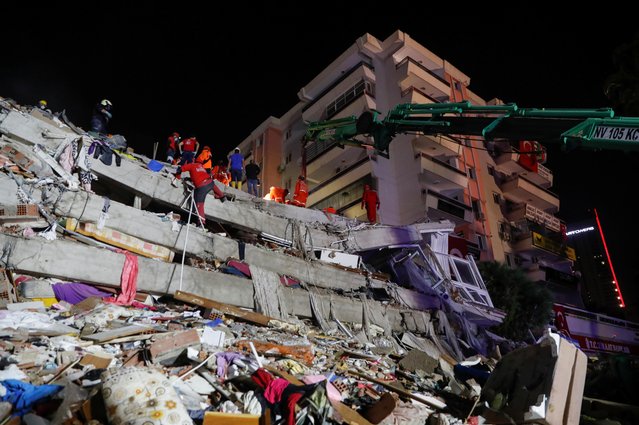 Rescue operations take place on a site after an earthquake struck the Aegean Sea, in the coastal province of Izmir, Turkey, October 30, 2020. (Photo by Murad Sezer/Reuters) 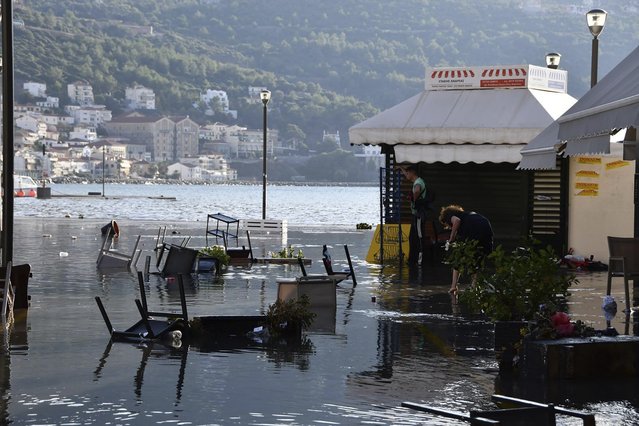 Seawater covers a square after an earthquake at the port of Vathi on the eastern Aegean island of Samos, Greece, Friday, October 30, 2020. A strong earthquake struck in the Aegean Sea between the Turkish coast and the Greek island of Samos as the magnitude 6.6 earthquake was centered in the Aegean at a depth of 16.5 kilometers, or 10.3 miles. (Photo by Michael Svarnias/AP Photo) 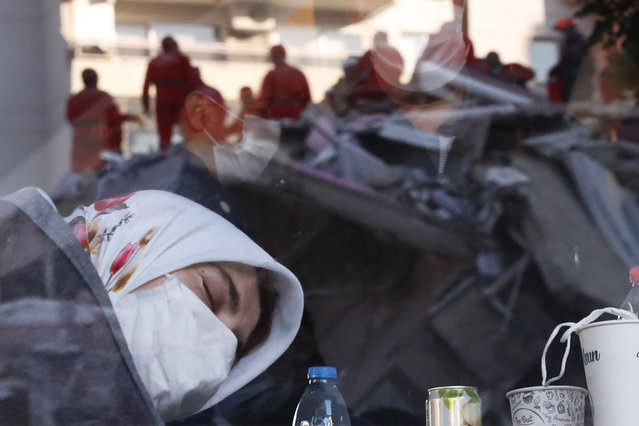 A local resident, staying outdoors for fear of aftershocks, takes.a moment to relax inside a coffee shop, as members of rescue services searching for survivors in the debris of a collapsed building are reflected in the window, in Izmir, Turkey, early Saturday, October 31, 2020. Rescue teams on Saturday ploughed through concrete blocs and debris of eight collapsed buildings in Turkey's third largest city in search of survivors of a powerful earthquake that struck Turkey's Aegean coast and north of the Greek island of Samos, killing dozens Hundreds of other were injured. (Photo by Darko Bandic/AP Photo) 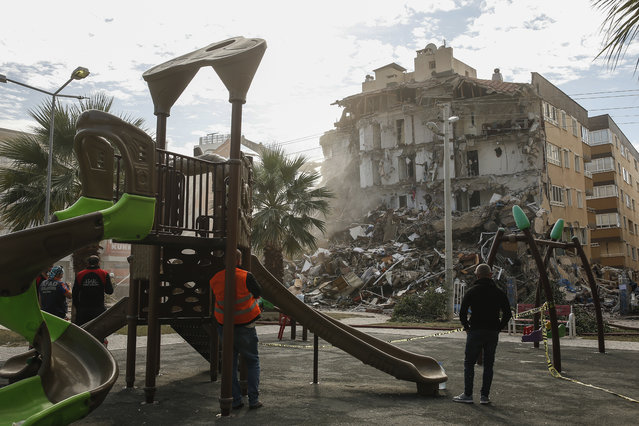 People watch from a playground the debris of a collapsed building, in the coastal city of Izmir, Turkey, Monday, November 2, 2020. In scenes that captured Turkey's emotional roller-coaster after a deadly earthquake, rescue workers dug two girls out alive Monday from the rubble of collapsed apartment buildings three days after the region was jolted by quake that killed scores of people. Close to a thousand people were injured. (Photo by Emrah Gurel/AP Photo) 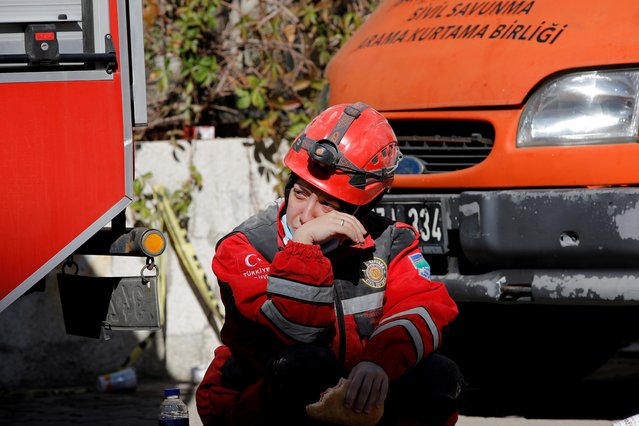 A woman reacts as rescue operations take place on a site after an earthquake struck the Aegean Sea, in the coastal province of Izmir, Turkey, November 2, 2020. (Photo by Kemal Aslan/Reuters) 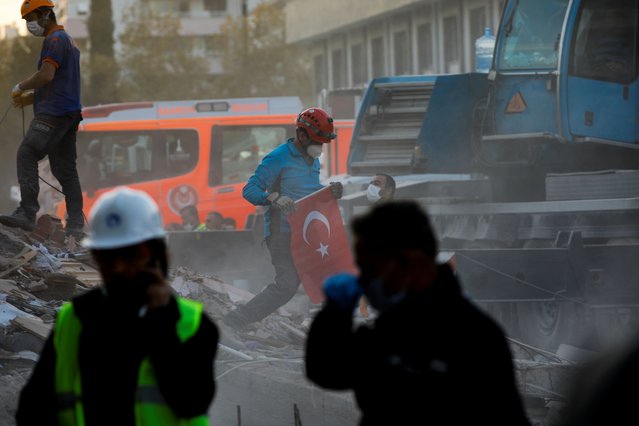 A worker holds a national flag as rescue operations take place on a site after an earthquake struck the Aegean Sea, in the coastal province of Izmir, Turkey, November 2, 2020. (Photo by Kemal Aslan/Reuters) 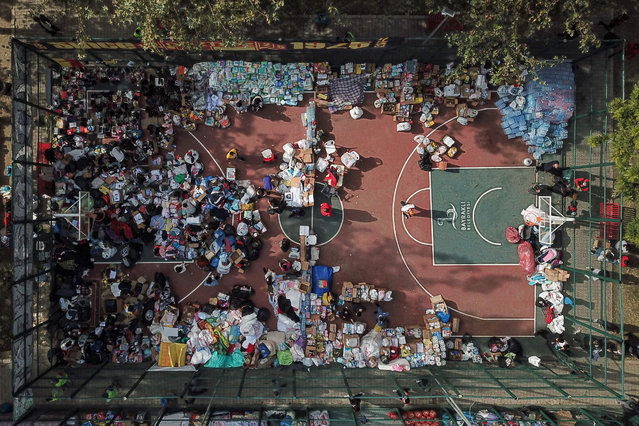 This aerial view shows and food and clothing aid sent by supporters of Goztepe Football Club to affected residents, laid out on a basketball court in Izmir on November 3, 2020, after the Aegean port city was struck by a 7.0-magnitude earthquake. Rescue workers were searching eight buildings in Izmir despite dwindling hope for survivors, as the death toll of a powerful magnitude earthquake which hit western Turkey rose to 69. The 7.0-magnitude quake has also injured 896 in Turkey, the Turkish emergency authority AFAD said, after striking on October 30, afternoon near the west coast town of Seferihisar in Izmir province. (Photo by Ozan Kose/AFP Photo) 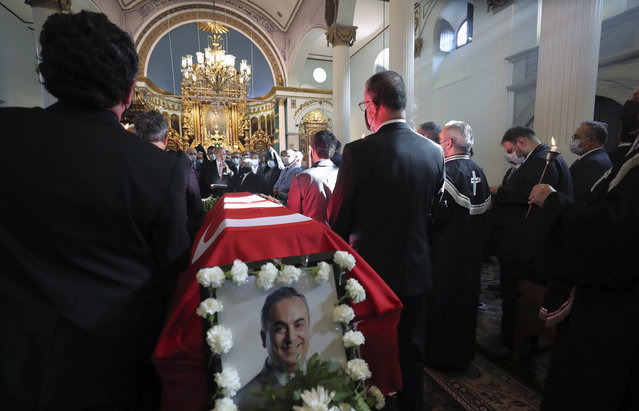 Turkey's President Recep Tayyip Erdogan, rear center, speaks as he attends a funeral ceremony for Markar Esayan, a Turkish lawmaker from Erdogan's ruling Justice and Development Party, who died of cancer at 51, at the Armenian Patriarchate Church, in Istanbul, Thursday, October 22, 2020. (Photo by Turkish Presidency via AP Photo/Pool) 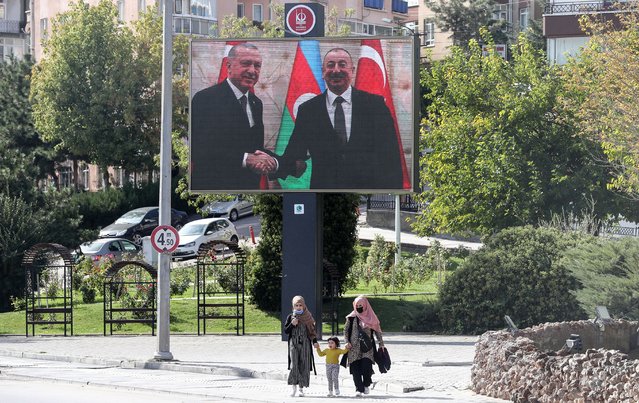 Two women walk past a large image of Turkish President Recep Tayyip Erdogan (L) and Azerbaijani President Ilham Aliyev shaking hands displayed on a huge screen in the Kecioren district of Ankara on October 21, 2020. The origins of a flareup in fighting over Nagorno-Karabakh that has now killed hundreds and threatens to involve regional powers Turkey and Russia are hotly contested and difficult to independently verify. Both sides accuse the other of striking first on September 27 over the ethnic Armenian region of Azerbaijan. (Photo by Adem Altan/AFP Photo) 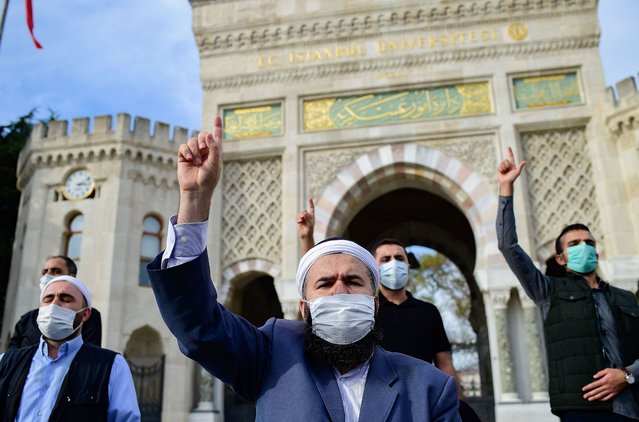 Men raise their finger as Turkish protesters shout slogans against France during a demonstration against French President's comments over Prophet Muhammad cartoons, in Istanbul, on October 25, 2020. Turkish President Recep Tayyip Erdogan on October 25, 2020 renewed his call for his French counterpart Emmanuel Macron to undergo mental checks, a day after his comments prompted Paris to recall its envoy to Ankara. Macron's comments, on October 21, 2020, came in response to the beheading of a teacher, Samuel Paty, outside his school in a suburb outside Paris earlier this month, after he had shown cartoons of the Prophet Mohammed during a class he was leading on free speech. (Photo by Yasin Akgul/AFP Photo) 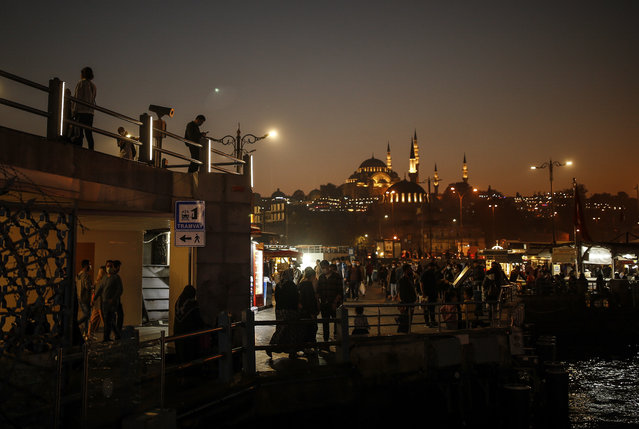 Backdropped by the Suleymaniye Mosque people stroll along the banks of the Bosporous in Istanbul, Turkey Friday, October 23, 2020. In much of Europe, city squares and streets, be they wide, elegant boulevards like in Paris or cobblestoned alleys in Rome, serve as animated evening extensions of drawing rooms and living rooms. As Coronavirus restrictions once again put limitations on how we live and socialize, AP photographers across Europe delivered a snapshot of how Friday evening, the gateway to the weekend, looks and feels. (Photo by Emrah Gurel/AP Photo) 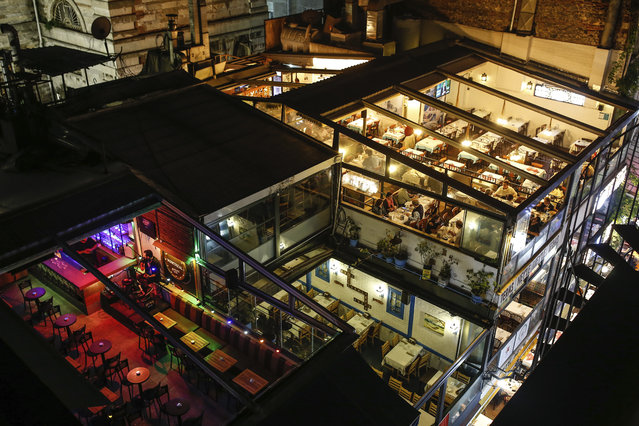 A view of restaurants, some with diners, others with many empty tables, near Taksim Square in Istanbul, Friday, October 23, 2020. (Photo by Emrah Gurel/AP Photo) 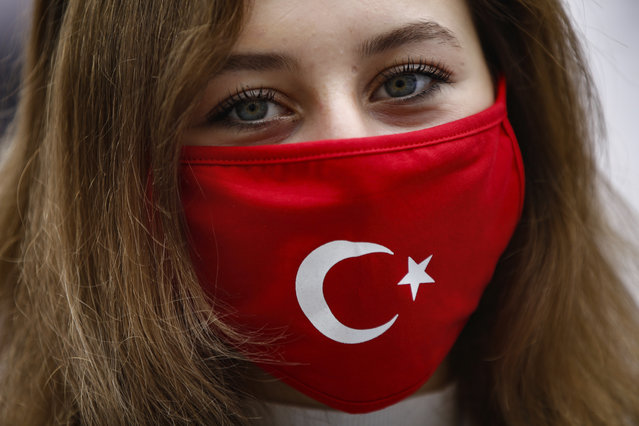 A woman, wearing a Turkish flag-decorated mask to help curb the spread of the coronavirus, near France's consulate in Istanbul, Wednesday, October 28, 2020. Turkish officials railed against French satirical magazine Charlie Hebdo over its cover-page cartoon mocking Turkish President Recep Tayyip Erdogan and accused it of sowing "the seeds of hatred and animosity." The cartoon could further heighten tensions between Turkey and France, which erupted over French President Emmanuel Macron's firm stance against Islamism following the beheading of a teacher who showed his class caricatures of the Prophet Muhammad for a free speech class. (Photo by Emrah Gurel/AP Photo)
Edit Del
06 Nov 2020 00:05:00, post received 0 comments
Publication archive:
←   →
Popular tags:
All tags
Last searches: