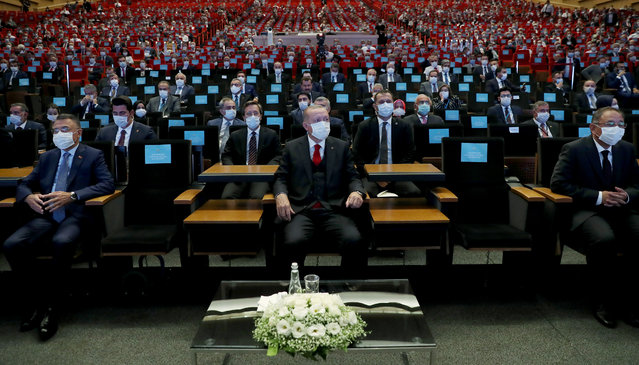 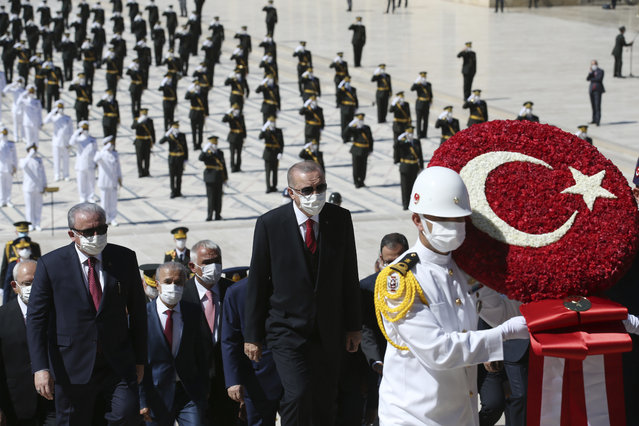 Turkey's President Recep Erdogan, center, follows a military honour guard during a ceremony at the mausoleum of Mustafa Kemal Ataturk, founder of modern Turkey, in Ankara, Turkey, Sunday, August 30, 2020. Turkey marked the 98th anniversary of the decisive War of Independence battle against Greek forces Sunday as the threat of a new conflict with Athens looms in the eastern Mediterranean.(Photo by Turkish Presidency via AP Photo/Pool) 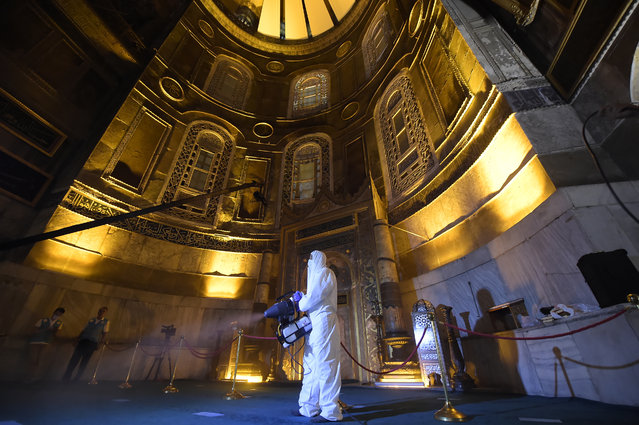 A few hours before prayers for the Islamic festival of Eid al-Adha, a municipality worker wearing protective clothing against the spread of coronavirus sprays disinfectant in the Byzantine-era Hagia Sophia, recently converted back to a mosque, in the historic Sultanahmet district of Istanbul, early Friday, July 31, 2020. This is the first Feast of Sacrifice since the onset of the coronavirus pandemic. The major Muslim holiday, at the end of the hajj pilgrimage to Mecca, is observed around the world by believers and commemorates prophet Abraham's pledge to sacrifice his son as an act of obedience to God. (Photo by Yasin Akgul/AP Photo) 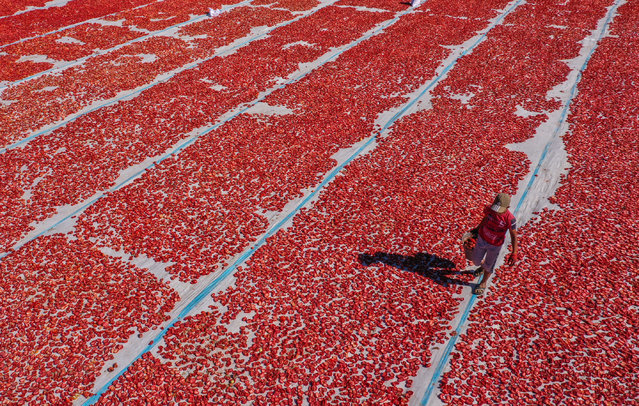 A drone photo shows an aerial view of tomatoes being dried in the sun at Torbali district in Izmir, Turkey on August 6, 2020. Tomatoes, collected by seasonal workers, are loaded onto trucks and tractors and transported to the processing fields, where massive white plastics are laid on the ground. Here, tomatoes are cut in half, with some being sulphured or salted depending on the demand, dried in the the sun for a week. (Photo by Halil Fidan/Anadolu Agency via Getty Images) 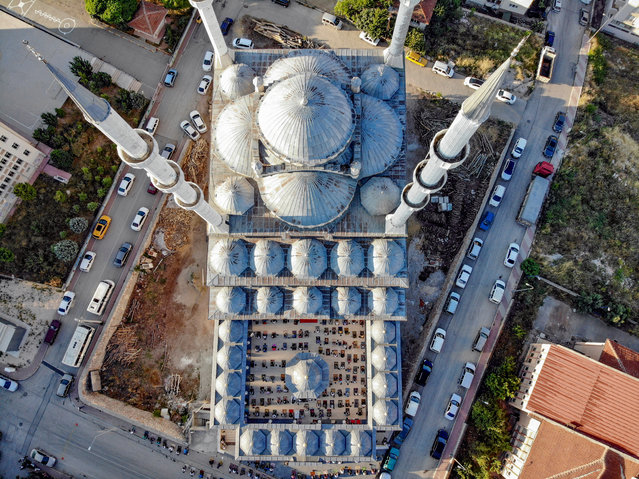 An aerial view of Kayiboyu Mosque is seen during Eid al-Adha prayer as people contain social distance due to coronavirus (Covid-19) pandemic in Bilecik, Turkey on July 31, 2020. (Photo by Tayyib Hosbas/Anadolu Agency via Getty Images) 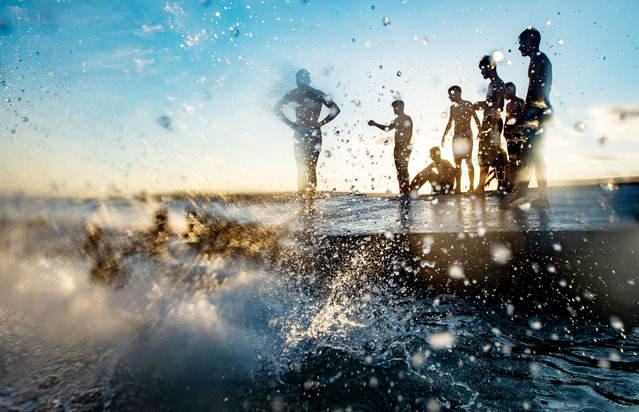 People cool off at the Menekse beach during the last day of the celebrations of the Eid-al-Adha holiday amid the ongoing pandemic of coronavirus at the sunset in Istanbul, Turkey, on August 3, 2020. (Photo by Yasin Akgul/AFP Photo) 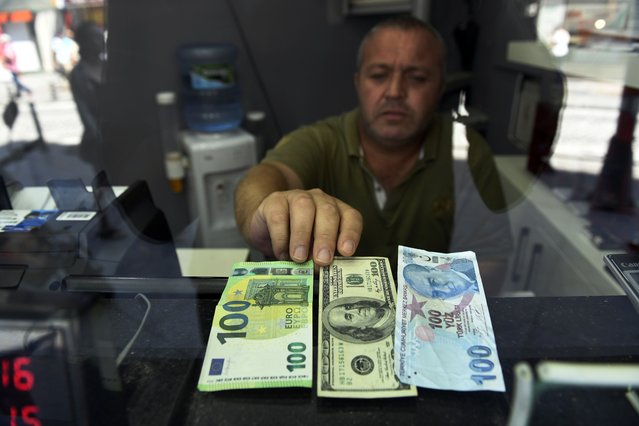 A currency exchange shop employee shows 100 Euros, 100 U.S. dollars and 100 Turkish Liras banknotes at his shop at a market street in Istanbul, Thursday, July 30, 2020. The Turkish Lira continued its trend down against the U.S. dollar Thursday but was still above a historic low in May. (Photo by Omer Kuscu/AP Photo) 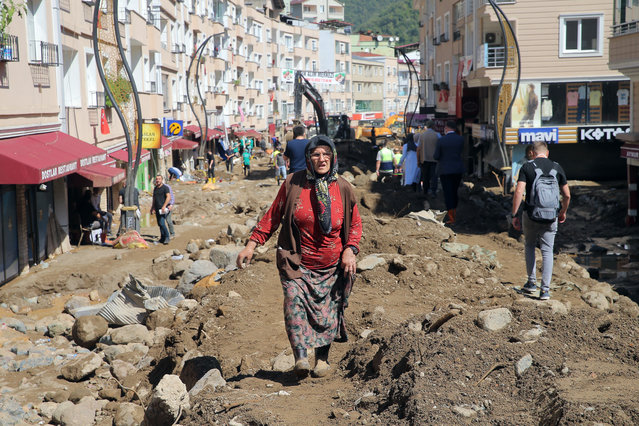 People are seen in the area hit by floods following heavy rains in Dereli district of Turkeyâs Black Sea province of Giresun on August 24, 2020. (Photo by Baris Oral/Anadolu Agency via Getty Images) 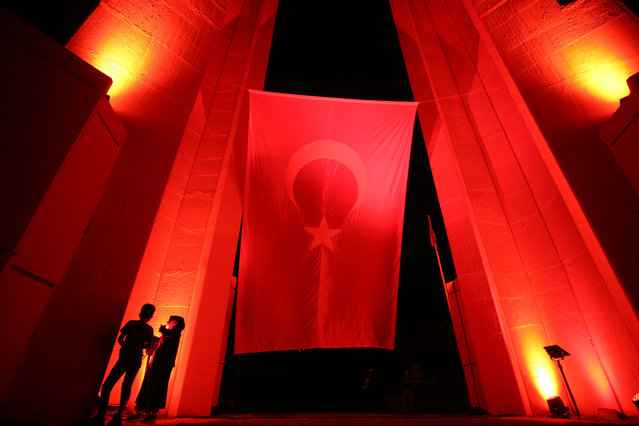 Turkish flag is reflected to 1071 Victory monument within the 949th anniversary of Victory of Malazgirt (1071 Manzikert War) on August 25, 2020 in Mus, Turkey. (Photo by Ozkan Bilgin/Anadolu Agency via Getty Images) 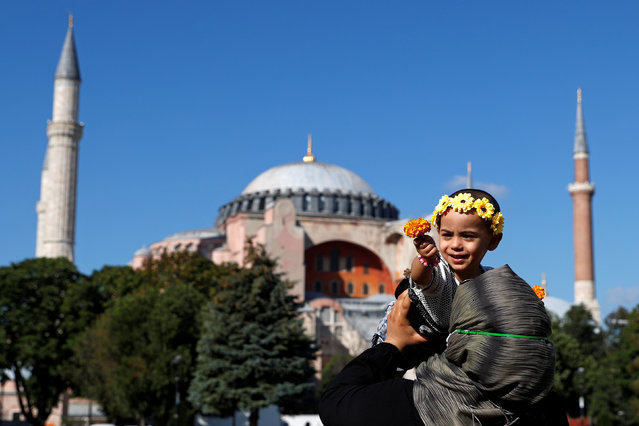 A woman holds a child in front of Hagia Sophia or Ayasofya-i Kebir Camii in Istanbul, Turkey, July 23, 2020. (Photo by Murad Sezer/Reuters) 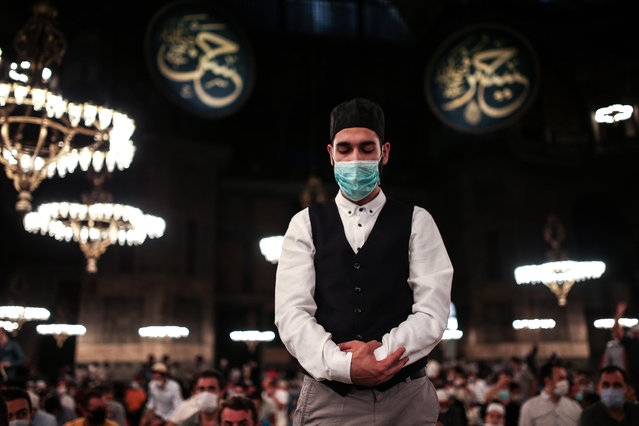 Muslims perform the first morning prayer at Hagia Sophia Mosque after it was reopened for worship for the first time in 86 years with Friday prayer in Istanbul, Turkey on July 25, 2020. After 86 years of serving as a museum, Istanbul iconic landmark, Hagia Sophia opened for prayers on Friday. (Photo by Arif Hudaverdi Yaman/Anadolu Agency via Getty Images) 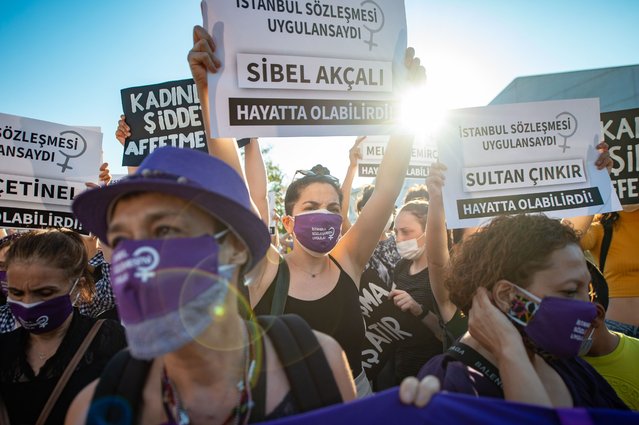 Demonstrators wearing protective face masks hold up placards during a demonstration for a better implementation of the Istanbul Convention and the Turkish Law 6284 for the protection of the family and prevention of violence against women, in Istanbul, Turkey, on August 5, 2020. (Photo by Yasin Akgul/AFP Photo) 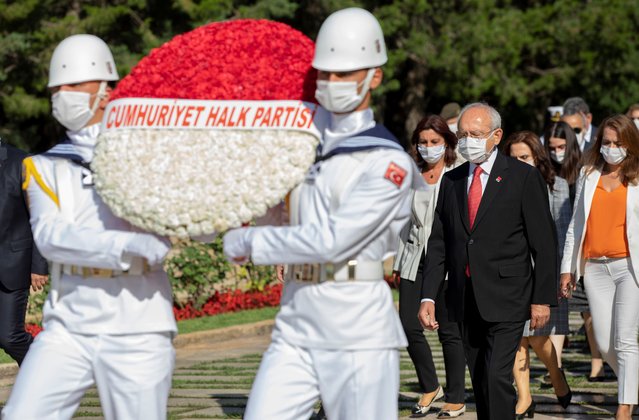 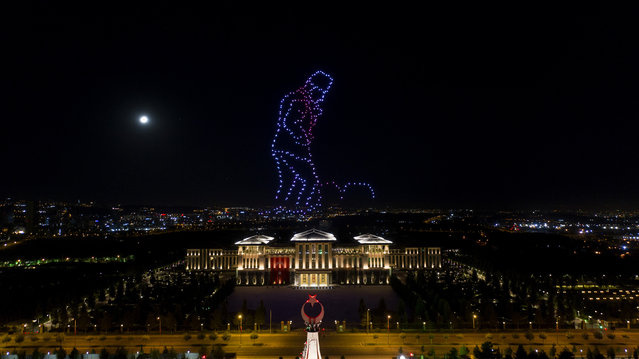 300 unmanned aerial vehicles are seen during a light performance to commemorate the 98th Anniversary of Turkeyâs Victory Day at Presidential Complex in Ankara, Turkey on August 30, 2020. (Photo by Communications Directorate/Anadolu Agency via Getty Images) 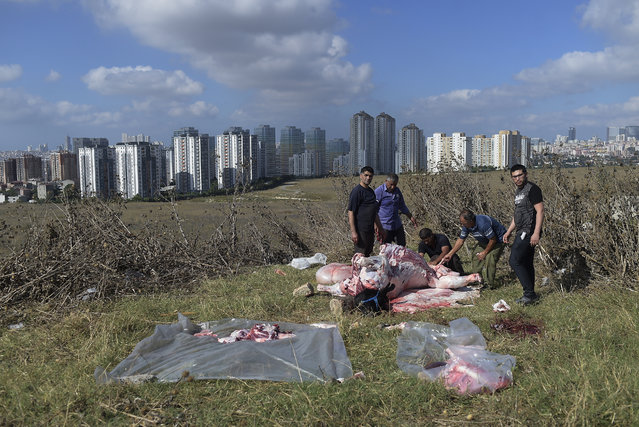 People cut meat at an open air market for animals at the start of Eid al-Adha, in Istanbul, Friday, July 31, 2020. Small groups of pilgrims performed one of the final rites of the Islamic hajj on Friday as Muslims worldwide marked the start of the Eid al-Adha holiday amid a global pandemic that has impacted nearly every aspect of this year's pilgrimage and celebrations. The last days of hajj coincide with the four-day Eid al-Adha, or “Feast of Sacrifice”, in which Muslims slaughter livestock and distribute the meat to the poor. (Photo by Yasin Akgul/AP Photo) 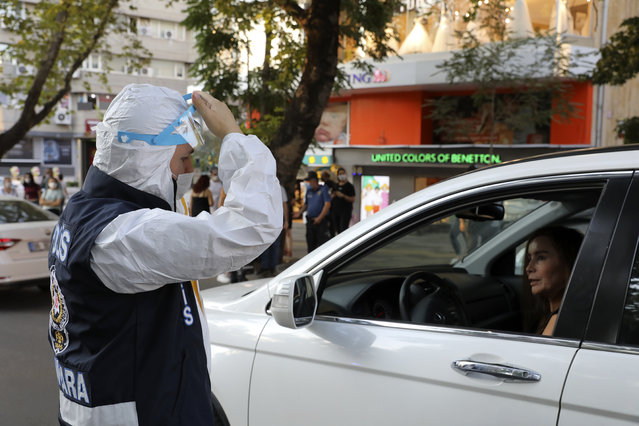 A police officer wearing a face mask to protect against the spread of coronavirus, instructs a woman to wear her mask, in Ankara, Turkey, Thursday, August 6, 2020. Turkey's interior ministry announced new measures Wednesday to curb the spread of COVID-19 as daily confirmed cases peaked above 1,000. (Photo by Burhan Ozbilici/AP Photo) 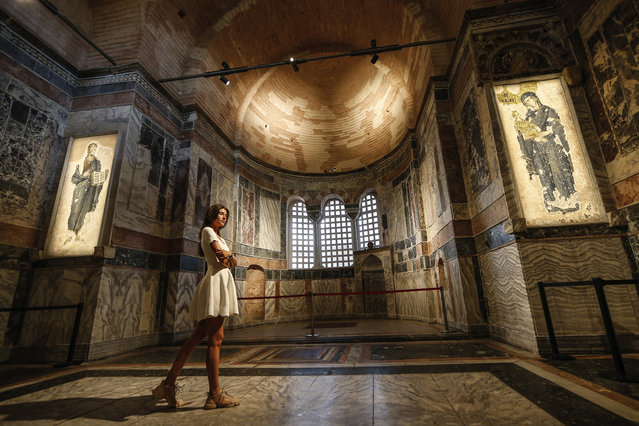 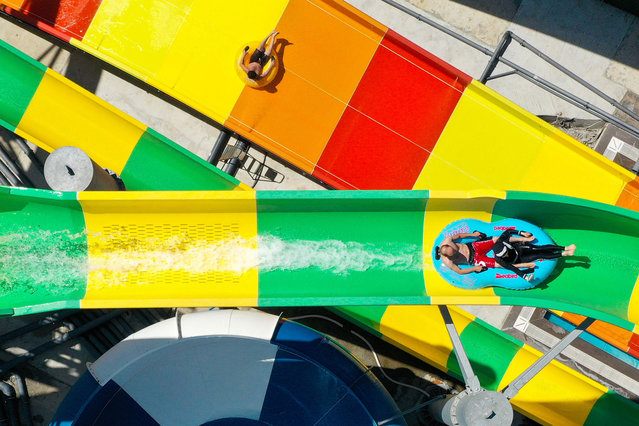 A drone photo shows an aerial view of people enjoying rides on water slides at an aquapark in Istanbul, Turkey on August 16, 2020. (Photo by Muhammed Enes Yildirim/Anadolu Agency via Getty Images) 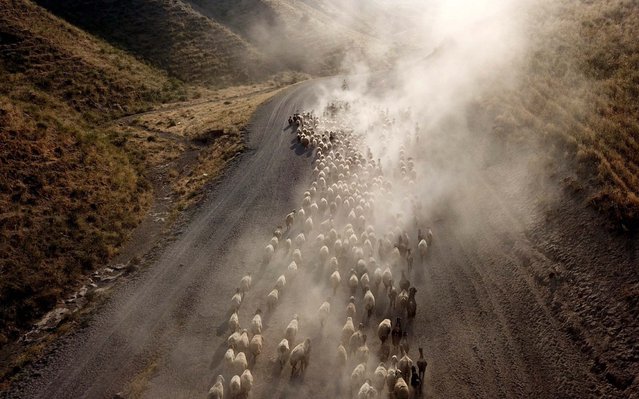 Sheep rise dust on the way of being brought to the highlands on the foothills of Mount Nemrut during sunset in Tatvan district of Bitlis, Turkey on August 05, 2020. (Photo by Ahmet Okur/Anadolu Agency via Getty Images) 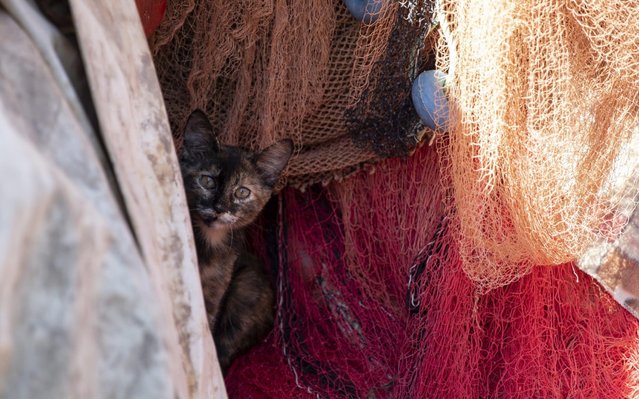 A cat is seen between nets of fishers preparing for the upcoming season in Guzelbahce district of Turkey's western province of Izmir on August 20, 2020. Last year, fishers finished the season on the last week of March instead of April 15th due to the coronavirus (Covid-19) pandemic. Preparations are underway ahead of the new season, expected to begin on 1st of September. (Photo by Lokman Ilhan/Anadolu Agency via Getty Images) 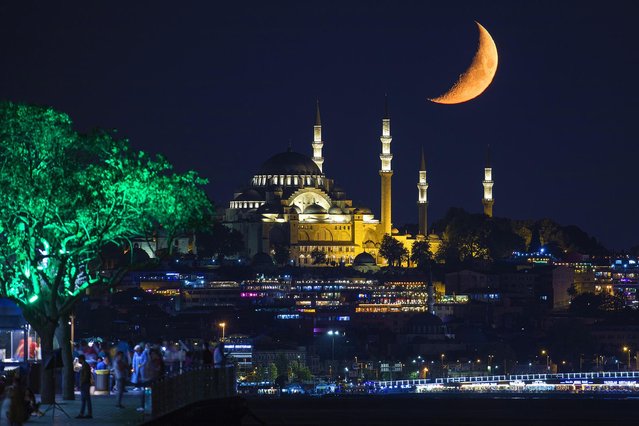