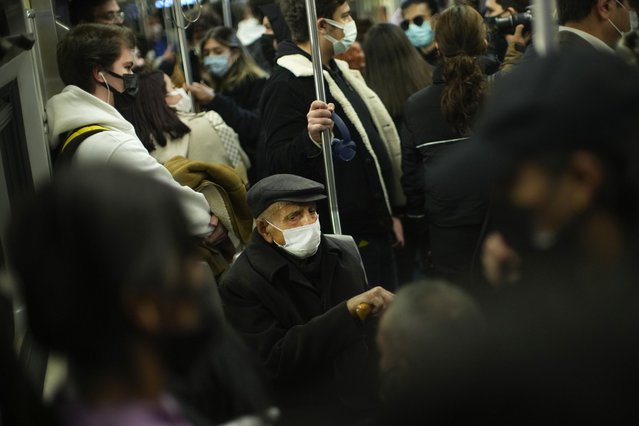 People, all wearing masks to prevent the spread of the COVID-19, take a ride in a metro in Istanbul, Turkey, Thursday, December 2, 2021. The coronavirus's omicron variant kept a jittery world off-kilter Wednesday, as reports of infections linked to the mutant strain cropped up in more parts of the globe, and one official said that the wait for more information on its dangers felt like “an eternity”. (Photo by Francisco Seco/AP Photo) 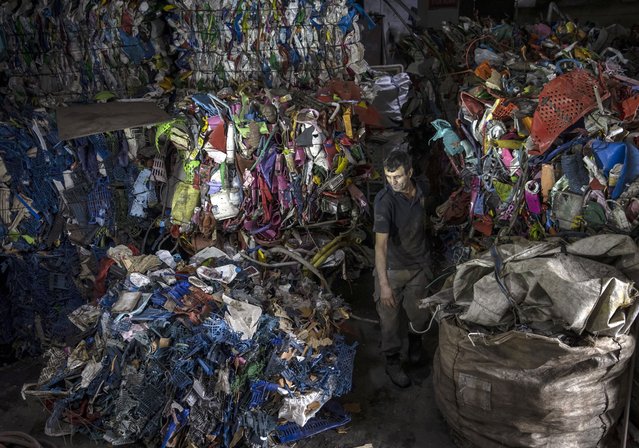 Workers sort and group plastic wastes to be recycled as sorting, crushing and washing processes are carried out at the recycling facility and turned into granules in Istanbul, Turkey on December 2, 2021. After being used, plastic wastes collected and recycled with 9 different processes, turning it into a second class plastic. Collecting these used materials to the recycling facility is mainly rely on human labor. People working in this business collect plastic wastes for hours as they believe that they help cleaning environment by collecting these wastes. (Photo by Sebnem Coskun/Anadolu Agency via Getty Images) 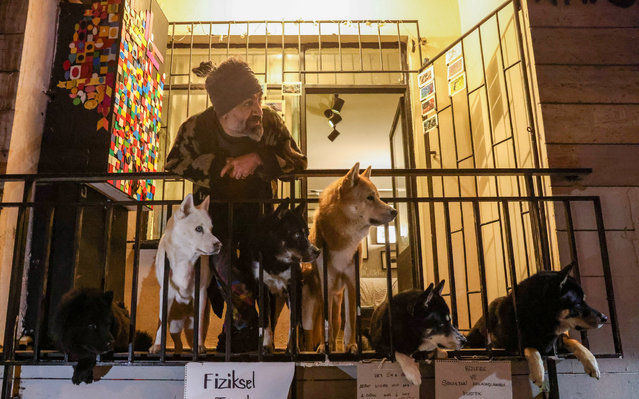 Cemil Ozcelik and his 6 huskies watch passers-by from their apartment's balcony in Istanbul, Turkey, December 1, 2021. (Photo by Umit Bektas/Reuters) 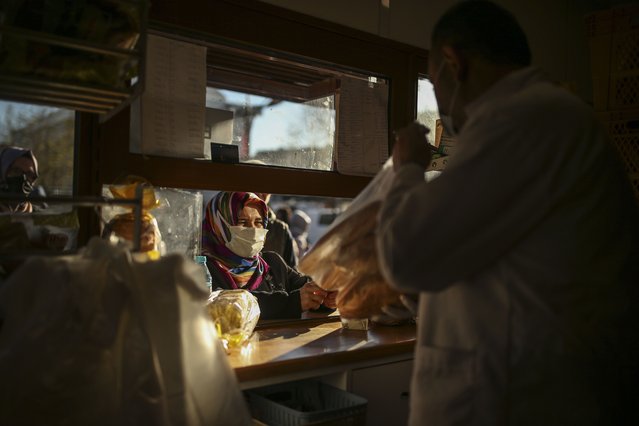 People buy bread in the Istanbul Municipality's bread kiosk in Istanbul, Thursday, December 2, 2021. Turkey’s beleaguered currency has been plunging to all-time lows against the U.S. dollar and the euro in recent months as President Recep Tayyip Erdogan presses ahead with a widely criticized effort to cut interest rates despite surging consumer prices. (Photo by Emrah Gurel/AP Photo) 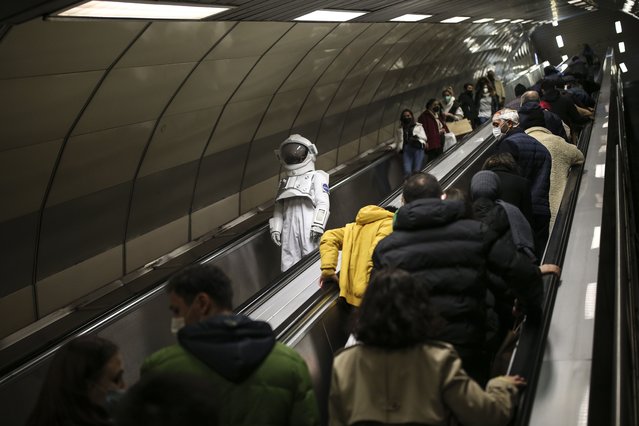 A man dressed as an astronaut takes an escalators in a metro station as part of a campaign to promote a NASA Space Exhibition, in Istanbul, Turkey, Saturday, December 4, 2021. (Photo by Emrah Gurel/AP Photo) 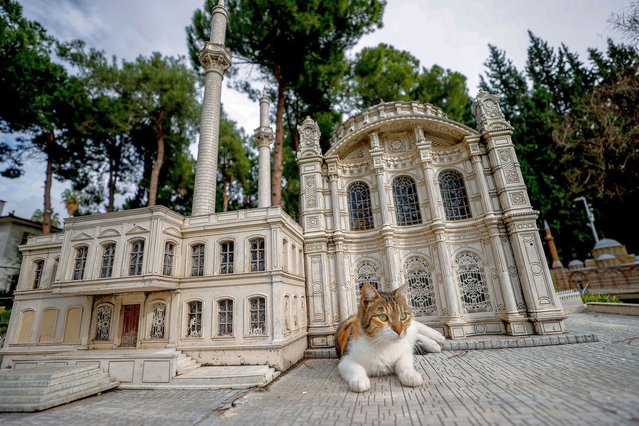 A view of an open-air museum where miniatures of architectural works from different parts of Turkey are exhibited, in Kepez district of Antalya, Turkey on December 13, 2021. Antalya Yarn and Cotton Weaving Factory area, whose activities were stopped by Kepez Municipality in 2003, turned into museum and activity area in 2015. In the area, there are miniatures of 84 historical and cultural artifacts of Turkey. (Photo by Mustafa Ciftci/Anadolu Agency via Getty Images) 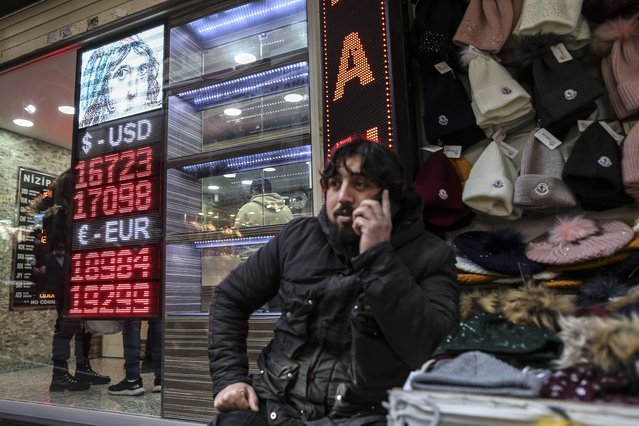 A man talks on the phone next to a currency exchange office in a commercial area in Eminonu district in Istanbul, Turkey, Friday, December 17, 2021. Turkey's currency has crashed to a new all-time low against the dollar on Friday, a day after the Central Bank again lowered a key interest rate despite surging consumer prices, in line with President Recep Tayyip Erdogan's unconventional economic policy. (Photo by Emrah Gurel/AP Photo) 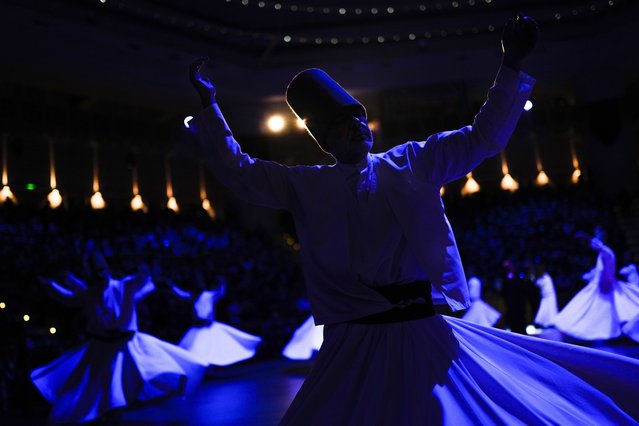 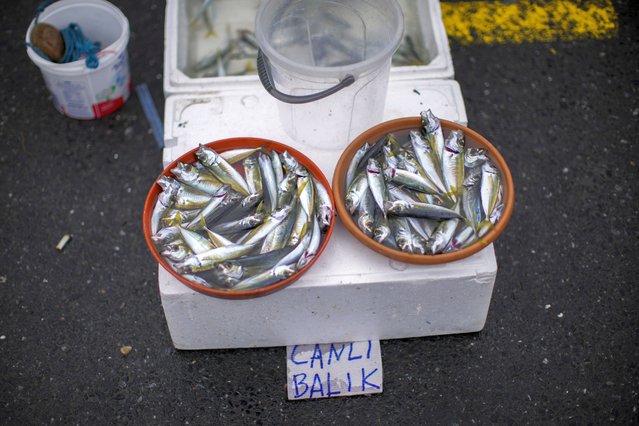 Containers of fish with a note that reads in Turkish, “Fresh fish” are displayed for sale to passers-by, at the Galata bridge in Istanbul, Turkey, Monday, December 20, 2021. The beleaguered Turkish currency reached another record low against the dollar on Monday, a day after President Recep Tayyip Erdogan stood firm on his policy to lower interest rate despite rising consumer prices and slammed business groups who called for a change of course. (Photo by Francisco Seco/AP Photo) 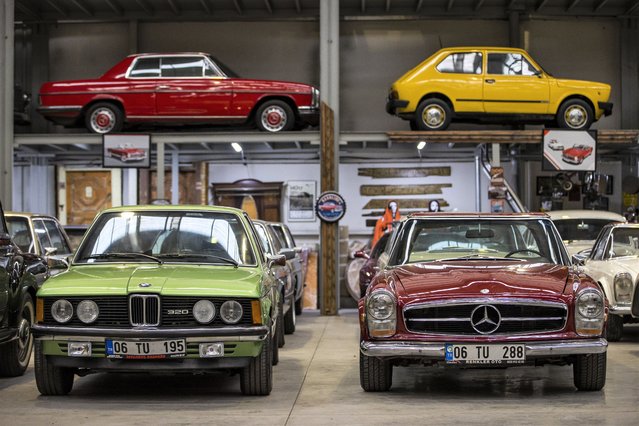 Vehicle collection of Engin Turhan, a businessman from Izmir is seen in capital Ankara, Turkey on December 21, 2021. Turhan has a collection of 73 vehicles over the years, consisting of cars, trucks, pick-up trucks, tractors, motorcycles and tricycles, with his passion for collecting, which started from an early age. (Photo by Aytac Unal/Anadolu Agency via Getty Images) 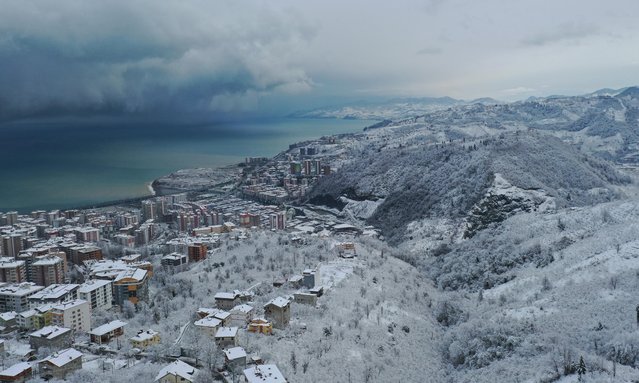 An aerial view of snow covered areas during winter season in Giresun, Turkey on December 23, 2021. (Photo by Gultekin Yetgin/Anadolu Agency via Getty Images) 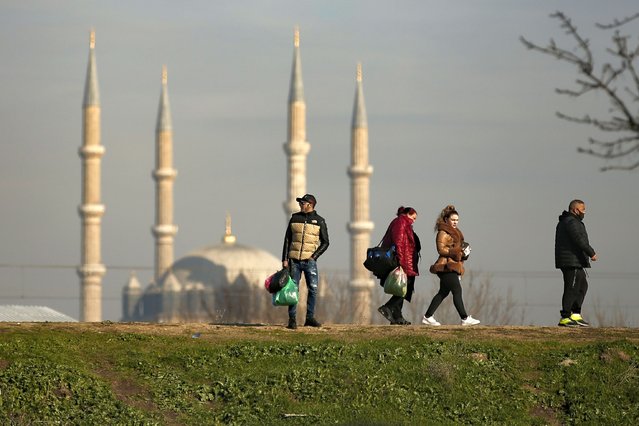 Bulgarian tourists walk to their cars with shopping bags in Edirne, near Bulgaria border, in Turkey, Friday, December 24, 2021. Bulgarian shoppers are crossing Turkey’s western border in packed cars and buses, taking advantage of a declining Turkish lira to fuel their own shopping sprees. Their first stop is the currency exchange and then it's off to the markets and grocery stores in the northwestern city of Edirne. (Photo by Emrah Gurel/AP Photo) 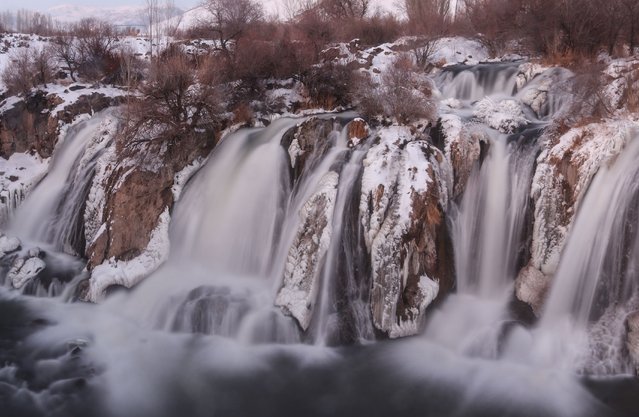 A view from partly frozen Muradiye Waterfall during winter season in Muradiye district of Turkey's eastern Van province on December 26, 2021. Temperature dropped down to 18 Celsius degrees below zero, freezing part of the waterfall. (Photo by Necmettin Karaca/Anadolu Agency via Getty Images) 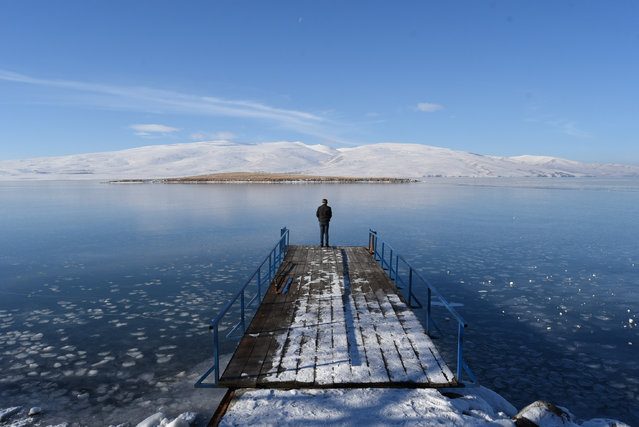 A view of Lake Cildir after its surface frozen due to nipping cold in Kars, Turkey on December 29, 2021. (Photo by Ismail Kaplan/Anadolu Agency via Getty Images) 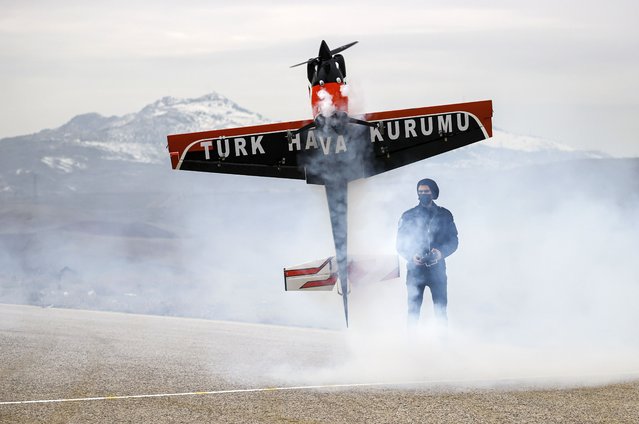 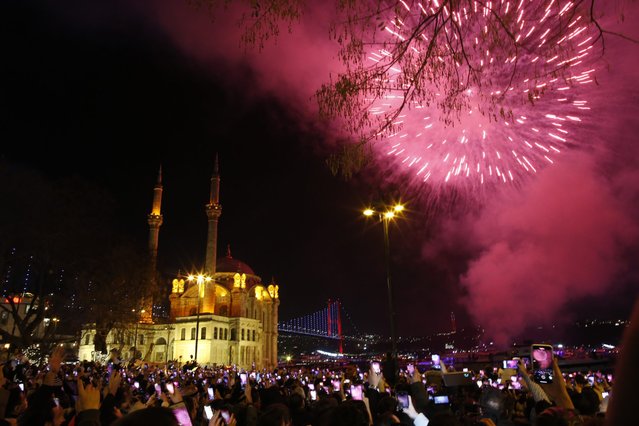 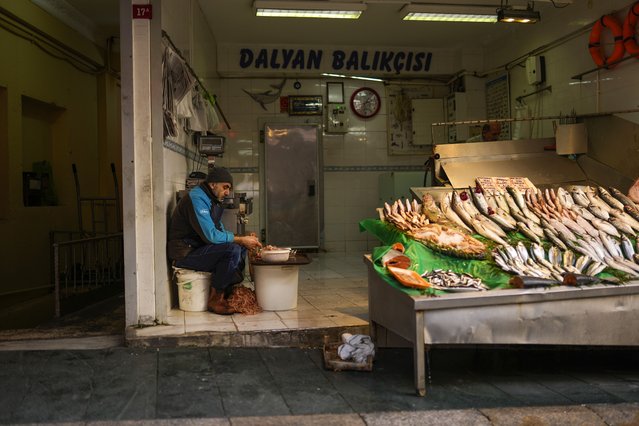 A fishmonger peels prawns as he waits for clients in a street market in Istanbul, Turkey, Monday, January 3, 2022. Turkey's yearly inflation climbed by the fastest pace in 19 years, jumping to 36.08% in December, official data showed on Monday. (Photo by Francisco Seco/AP Photo) 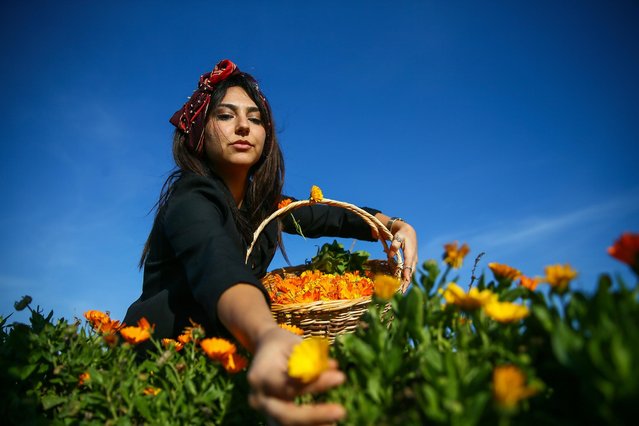 Women workers pick pot marigolds, also known as Calendula officinalis, which were used in alternative medicine, within the production process in Izmir, Turkiye on January 04, 2022. The women, who started to collect the medicinal plant in June, sent the first batch of the product they dried and packaged to Qatar. (Photo by Halil Fidan/Anadolu Agency via Getty Images) 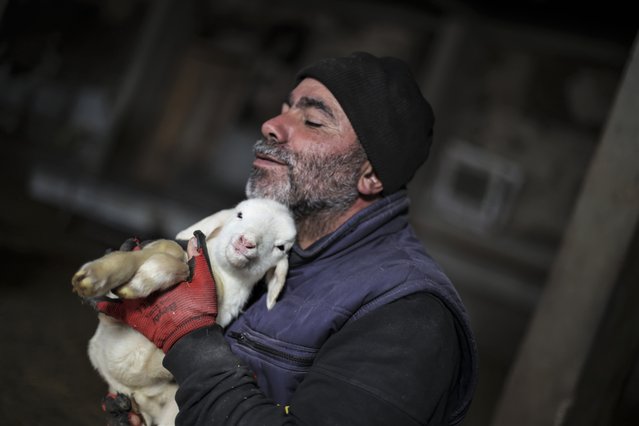 A breeder holds a lamb at a farm of breeders in Oyaca neighbourhood in Golbasi ditrict of Ankara, Turkiye on January 06, 2022. Breeders are continuing to keep watch all the time for calving of sheep and meet the mother sheep twice a day to feed the lambs as they trying to protect them from cold weather and disease. (Photo by Esra Hacioglu/Anadolu Agency via Getty Images)
Edit Del
13 Jan 2022 07:43:00, post received 0 comments
Publication archive:
←   →
Popular tags:
All tags
Last searches: