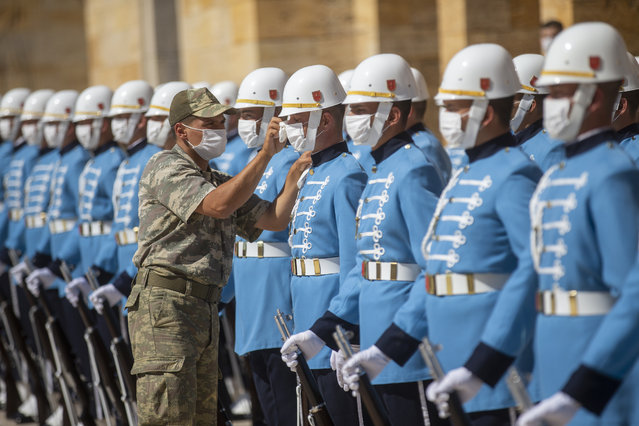 Ceremonial soldiers, wearing masks as a precautionary measure against the novel coronavirus (Covid-19), perform at Anitkabir, the mausoleum of Turkish Republic founder Mustafa Kemal Ataturk, to mark the 98th Anniversary of Turkeyâs Victory Day, a key Turkish defeat of Greek forces in the countryâs War of Independence 1919-1922, and Turkish Armed Forces Day, in Ankara, Turkey on August 30, 2020. (Photo by Aytac Unal/Anadolu Agency via Getty Images) 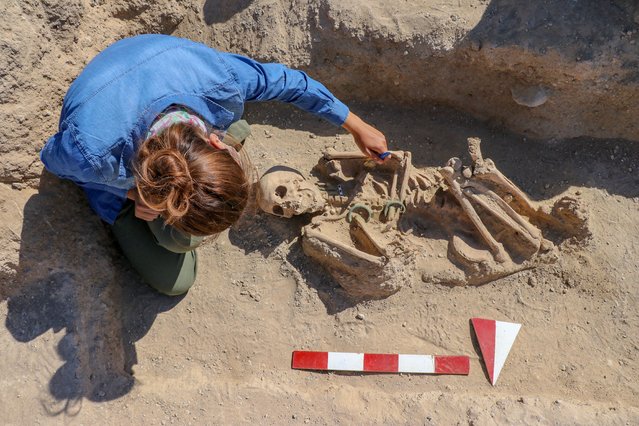 An archaeologist carries out excavation as a skeleton of a Royal Urartu woman buried with jewelry is found during the archaeological excavations at a necropolis of the Urartu period in Gurpinar district of Turkey's eastern Van province on August 31, 2020. Excavation works continue at the 2,750 year-old Necropolis, where aristocrats are believed to be buried. A royal woman skeleton was found wearing pendulum earrings, a ring on her finger, a necklace on her neck, an ornamental pin, and dragon-headed bracelets on her both arms. (Photo by Mesut Varol/Anadolu Agency via Getty Images) 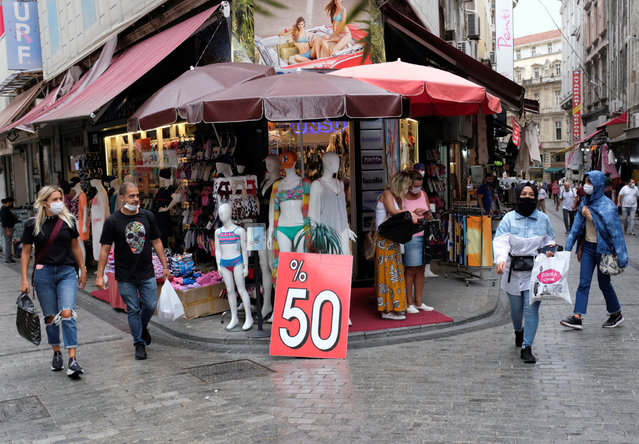 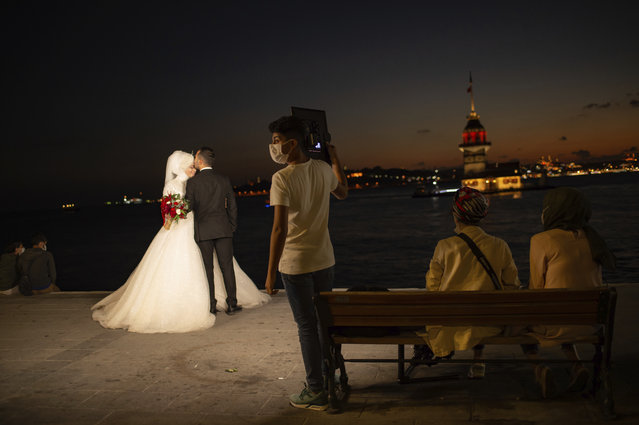 A wedding photographer's assistant, wearing a mask for protection against the spread of coronavirus, holds lighting equipment, as a couple poses for photographs backdropped by Istanbul's iconic Maiden's Tower (Kiz Kulesi) at the Bosphorus Strait separating the European and Asian sides of Istanbul, Friday, September 11, 2020. (Photo by Yasin Akgul/AP Photo) 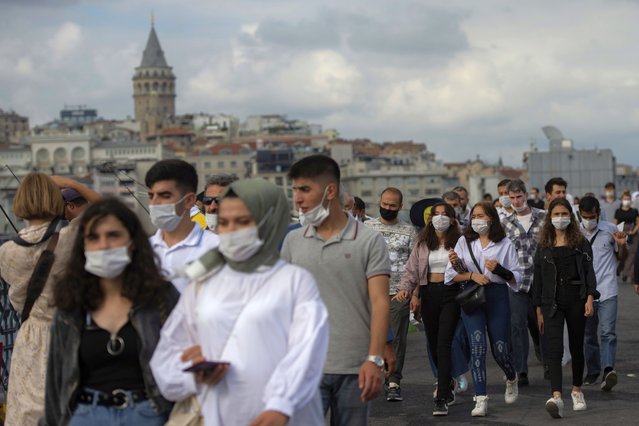 Backdropped by Istanbul's iconic Galata Tower, people wearing masks for protection against the spread of coronavirus, walk over Eminonu bridge in Istanbul, Friday, September 11, 2020. Turkey is getting tough on people who flout self-isolation rules despite testing positive for the coronavirus. An Interior Ministry circular sent to the country's 81 provinces on Friday said people caught leaving their homes despite isolation orders will be quarantined and supervised at state-owned dormitories or hostels. (Photo by Yasin Akgul/AP Photo) 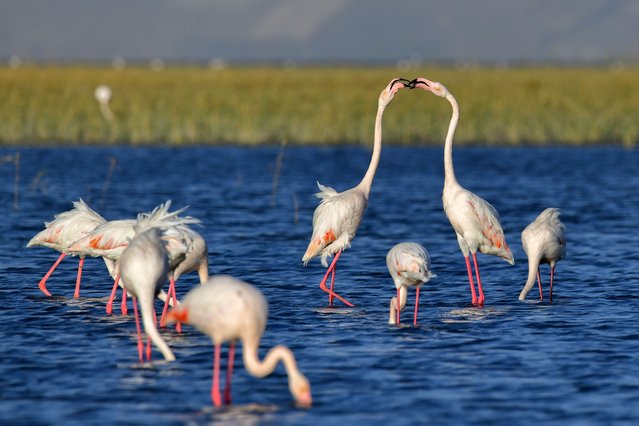 Flamingos are seen at Lake Ercek located in Van province of Turkey on September 11, 2020. (Photo by Ali Ihsan Ozturk/Anadolu Agency via Getty Images) 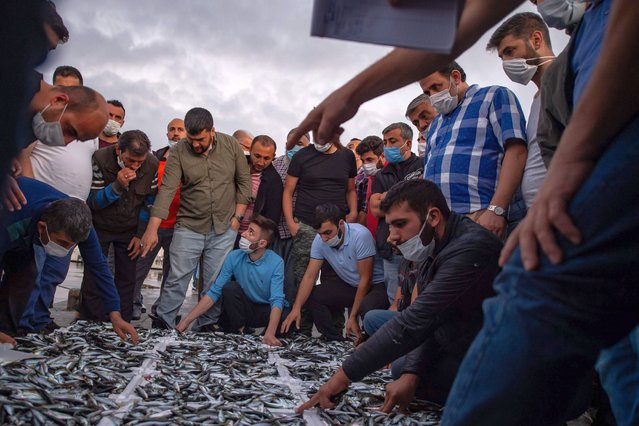 Fishermen and buyers wearing protective masks take part in a fish auction at a fish market in Istanbul on September 1, 2020. September 1 marks the end of the seasonal fishing ban and the official opening of the fishing season across Turkey. In the fish market, one of the main places to buy fish in Istanbul, masks, social distancing and continuous hand hygiene are mandatory to prevent the spread of the Covid-19 (novel coronavirus). (Photo by Yasin Akgul/AFP Photo) 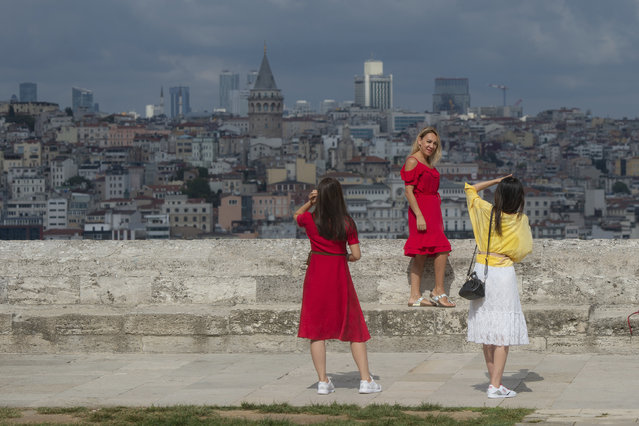 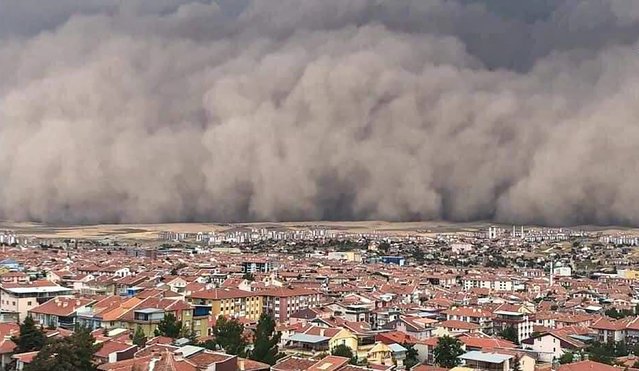 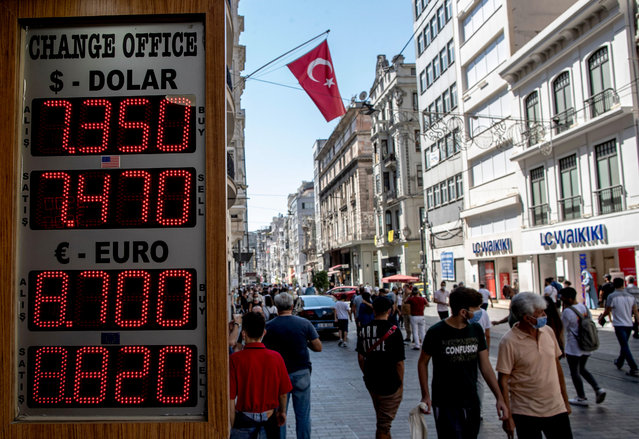 People wearing face masks walk in front of an exchange office at the Taksim square in Istanbul, Turkey, 03 September 2020. According to reports, the Turkish Lira fell to a fresh record low on 03 September against major currencies, recording 7.44 liras against the US dollar and 8.80 to the Euro. (Photo by Erdem Sahin/EPA/EFE/Rex Features/Shutterstock) 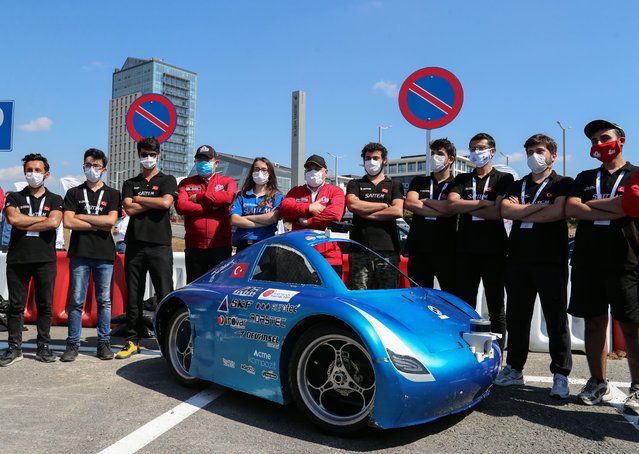 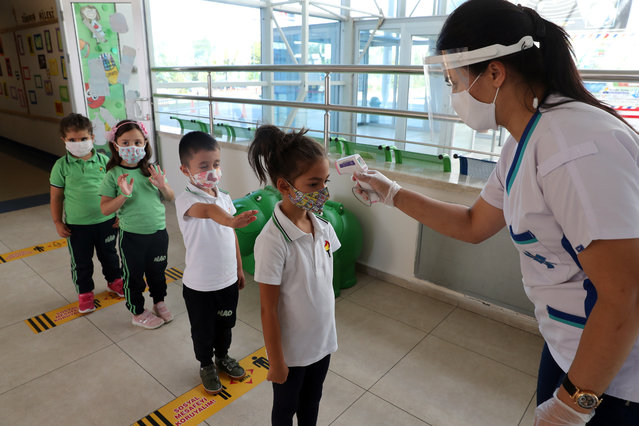 Students have their temperature checkesd as they attend the first day of school amid precaution measures to stem the spread of COVID-19, in a private school in Ankara on September 11, 2020. (Photo by Adem Altan/AFP Photo) 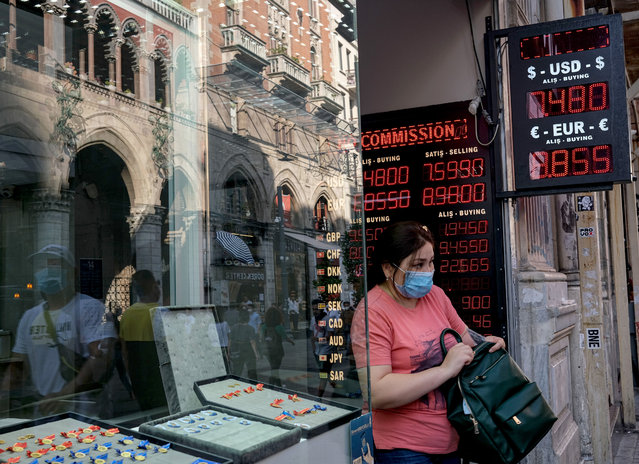 A woman exits a currency exchange office after exchanging her money in Istanbul, Turkey, 18 September 2020. Turkish Lira hit record low against major currencies, recording 7,59 liras against the US dollar and 8.98 against the Euro. (Photo by Sedat Suna/EPA/EFE/Rex Features/Shutterstock) 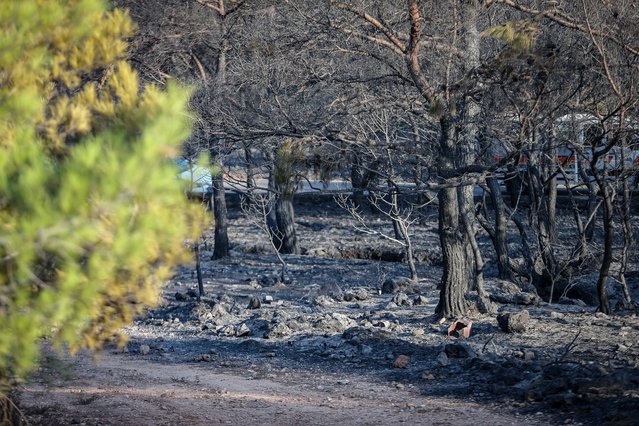 A view of burnt area of the forestland after the fire is taken under control in Ayvalik district of Balikesir, Turkey on September 20, 2020. (Photo by Sergen Sezgin/Anadolu Agency via Getty Images) 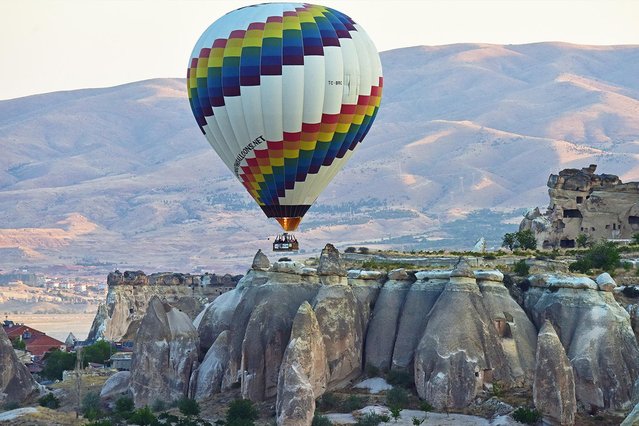 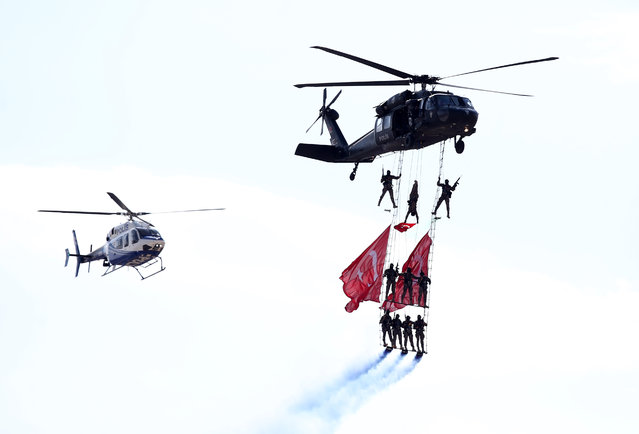 Police unit hangs from a helicopter with Turkish flags as they perform during the 5th Sivrihisar Airshow in Sivrihisar district of Eskisehir, Turkey on September 13, 2020. (Photo by Ali Atmaca/Anadolu Agency via Getty Images) 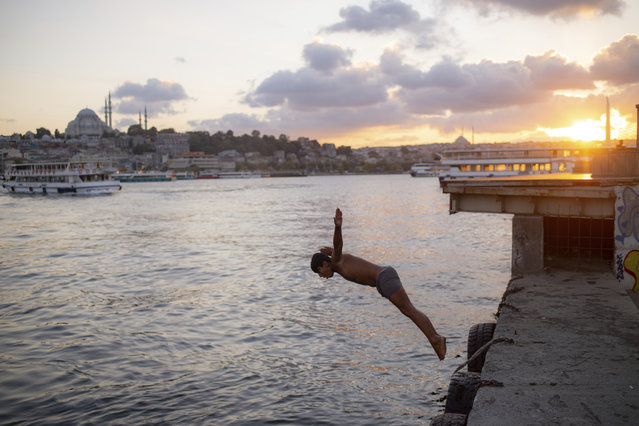 A youth jumps into the Golden Horn in Istanbul, Friday, September 11, 2020. (Photo by Yasin Akgul/AP Photo) 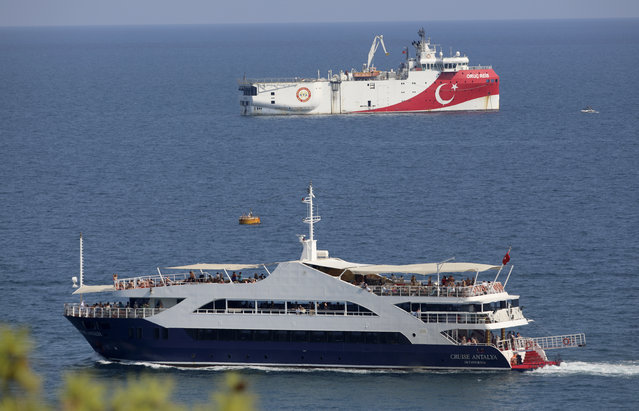 Turkey's research vessel, Oruc Reis, rear, anchored off the coast of Antalya on the Mediterranean, Turkey, Sunday, September 13, 2020. Greece's Prime Minister Kyriakos Mitsotakis welcomed the return of a Turkish survey vessel to port Sunday from a disputed area of the eastern Mediterranean that has been at the heart of a summer stand-off between Greece and Turkey over energy rights. (Photo by Burhan Ozbilici/AP Photo) 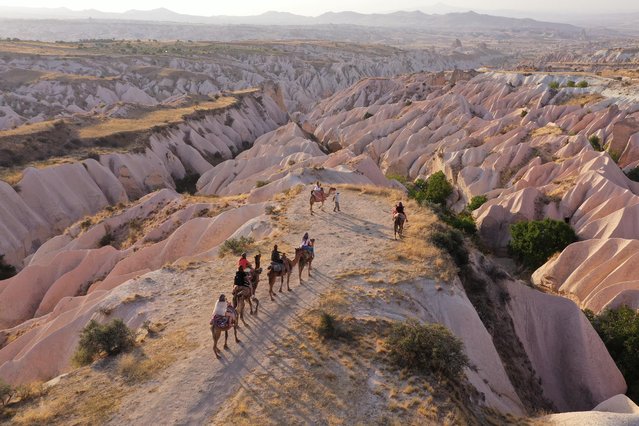 An aerial view of tourists riding camels while touring the fairy chimneys at the historical Cappadocia region, located in Central Anatolia's Nevsehir province, Turkey on September 13, 2020. Cappadocia is preserved as a UNESCO World Heritage site and is famous for its chimney rocks, hot air balloon trips, underground cities and boutique hotels carved into rocks. In Turkey's one of the most important tourism regions Cappadocia, local and foreign tourists get the chance of enjoying the scenery participating air balloon tours in the early hours of the morning. In the last five years, Among the 13 million 91 thousand 614 tourists who visited the museums and ruins in the region, 2 million 201 thousand 284 tourists participated in the hot air balloon tour and watched natural beauties from the sky. (Photo by Behcet Alkan/Anadolu Agency via Getty Images) 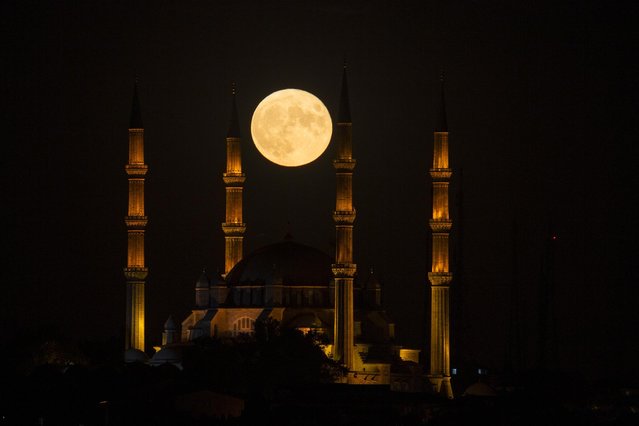