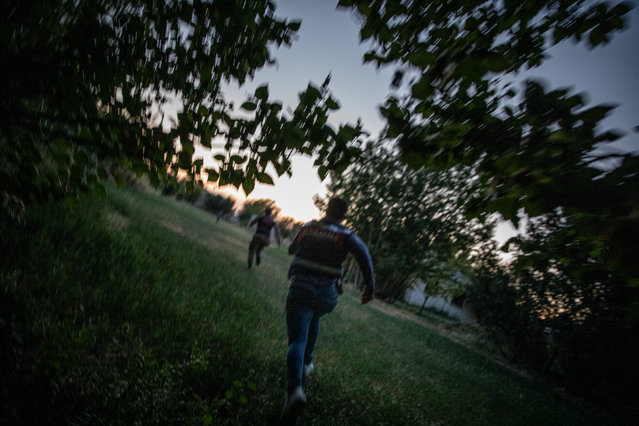 Jandarma officers chase a man who fled from a smuggler's car that was transporting Afghan migrants during a roadside raid on July 06, 2021 in Van, Turkey. A growing number of Afghan refugees are fleeing into Turkey as the Taliban escalates its military offensive and the United States nears completion of its troop withdrawal after a two-decade war. Since US President Joe Biden announced the August 31 pull-out deadline, the Taliban advance has been swift, with reports claiming they have taken control of more than half of the country's 400 districts. Over the past months, Turkey has seen a steady rise in Afghan migrants, most entering the country illegally via a centuries-old smuggling route through Iran. The numbers may rise further after the US announced an expansion of its refugee program for those who worked for the US but did not qualify for Special Immigrant Visas. These Afghans, who are not eligible for evacuation flights, would have to leave Afghanistan on their own before receiving US assistance. Turkey is a likely destination. The Afghans migrating to Turkey via Iran travel largely on foot, navigating the treacherous mountain range that makes up the Iran-Turkey border. Assisted by an organized network of smugglers, migrants pay upwards of $1000 USD per person for a journey through safe houses, across Van Lake, around land-border checkpoints, and onward to cities like Ankara and Istanbul. Migrants often report severe beatings by Iranian border guards and poor safe house conditions, while the mountain crossing and boat trips have claimed many lives. Turkey's law enforcement agencies have stepped up efforts to break up the smuggling networks, in a bid to slow rising numbers and protect migrant lives. Turkey already hosts more than 5.5 million asylum seekers, the world's largest refugee population. As the security condition in Afghanistan continues to deteriorate, fears of a new refugee crisis loom. (Photo by Chris McGrath/Getty Images) A rescue worker holds a kitten she saved from a building in Bozkurt town of Kastamonu province, Thursday, August 12, 2021. The floods triggered by torrential rains battered the Black Sea coastal provinces of Bartin, Kastamonu, Sinop and Samsun on Wednesday, demolishing homes and bridges and sweeping cars away by torrents. Helicopters scrambled to rescue people stranded on rooftops. (Photo by IHA via AP Photo) 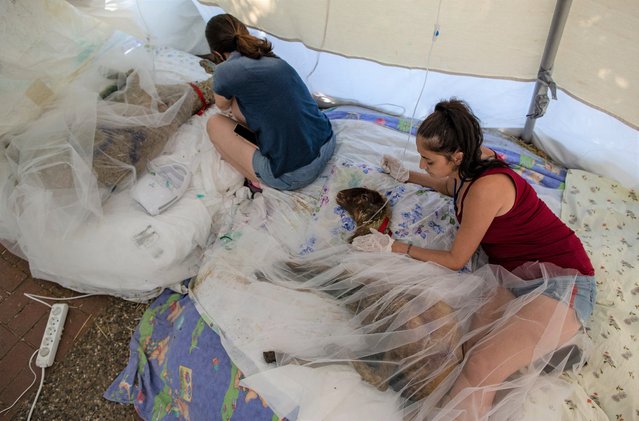 Volunteers care for burned sheeps in a field hospital established by HAYTAP (The Federation of the Animals Rights in Turkey) for animals after a wildfire at the Manavgat district of Antalya, Turkey, 09 August 2021. It is not known how many wild animals living in the forest died in the fires, but about 33,000 farm animals perished. About 30 veterinarians and hundreds of volunteers work around the clock at the field hospital. Sheep, covered in mosquito nets to protect their wounds from flies, lay there in the shade trying to recover, and various animals such as cats, dogs, owls, and cows have been treated or are still being treated there. (Photo by Erdem Sahin/EPA/EFE) 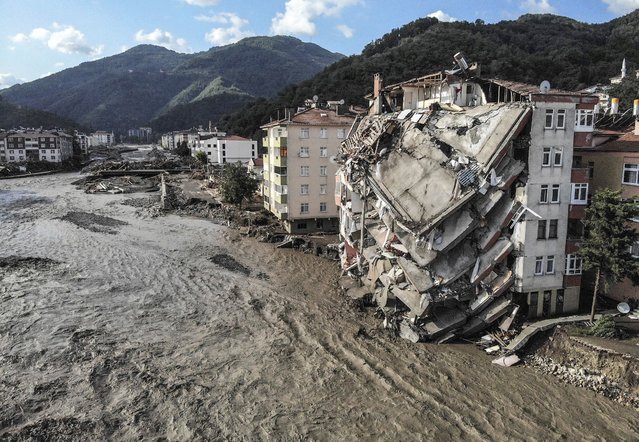 An aerial photo shows destroyed buildings after floods and mudslides killed about two dozens of people, in Bozkurt town of Kastamonu province, Friday, August 13, 2021. Heavy rainfalls that pounded the Black Sea coastal provinces of Bartin, Kastamonu, Sinop and Samsun on Wednesday caused the flooding that demolished homes and bridges and swept away cars. (Photo by Ismail Coskun/IHA via AP Photo) 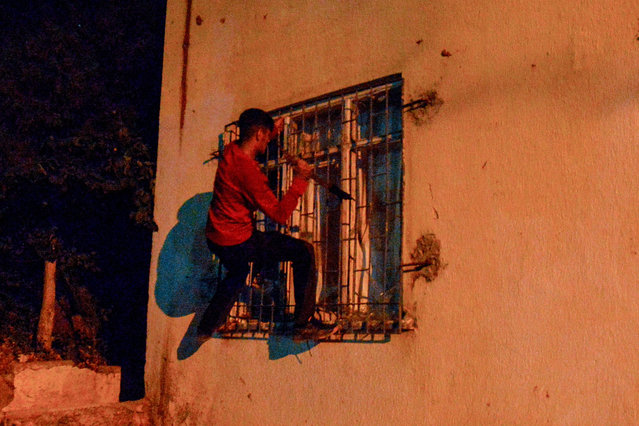 A youth breaks a window as men smash up shops and homes believed to be owned by Syrian families during an unrest, in Ankara, on August 12, 2021 overnight. The Ankara police said they had detained 76 people who were either suspected of involvement in the violence or of disseminating incendiary social media posts.The unrest broke out in response to a fight between locals and migrants in which one Turkish national was stabbed to death. (Photo by AFP Photo/Stringer) 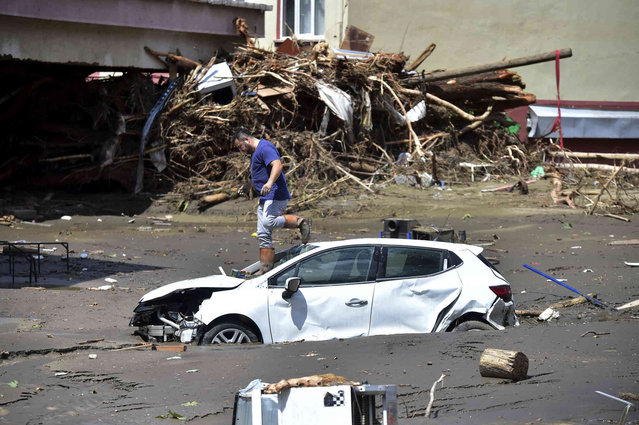 A man checks his car buried in the mud after floods and mudslides killed about three dozens of people, in Bozkurt town of Kastamonu province, Turkey, Friday, August 13, 2021. The death toll from devastating floods and mudslides in northern Turkey rose to at least 31 on Friday, officials said, as emergency services searched for survivors in collapsed buildings or swamped homes, shops and basements. An opposition politician said more than 300 people may be unaccounted-for. (Photo by AP Photo/Stringer) 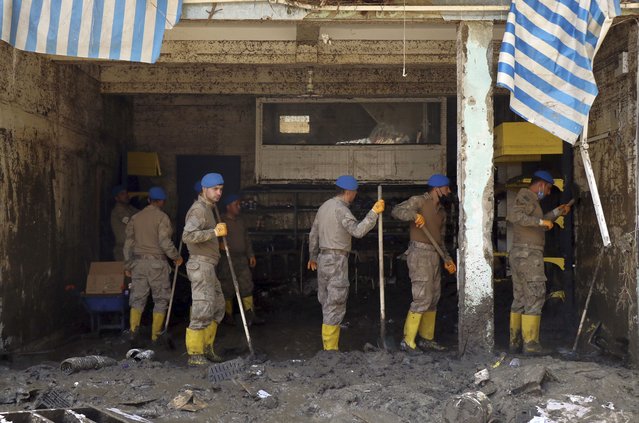 Soldiers clear the mud from a shop in Bozkurt town of Kastamonu province, Turkey, Saturday, August 14, 2021. The death toll from severe floods and mudslides in coastal Turkey has climbed to at least 44, the country's emergency and disaster agency said Saturday. Torrential rains that pounded the Black Sea provinces of Bartin, Kastamonu and Sinop on Wednesday caused flooding that demolished homes, severed at least five bridges, swept away cars and rendered numerous roads unpassable. (Photo by AP Photo/Stringer) 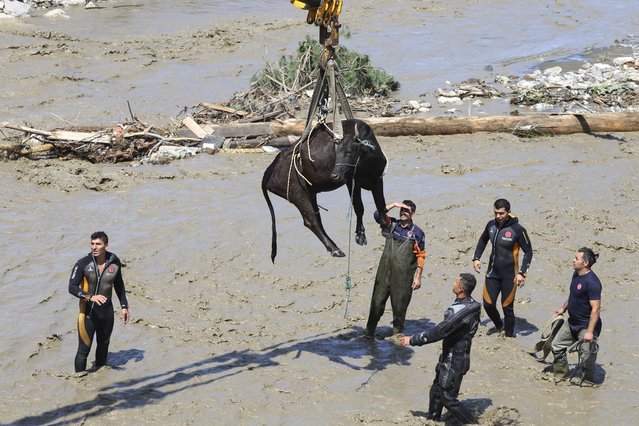 Rescue workers watch during a rescue operation for a cow a day after floods and mudslides killed about three dozens of people, in Abana town of Kastamonu province, Turkey, Friday, August 13, 2021. (Photo by AP Photo/Stringer) 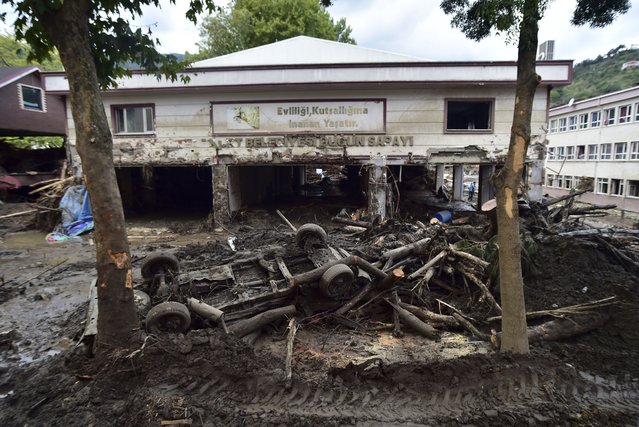 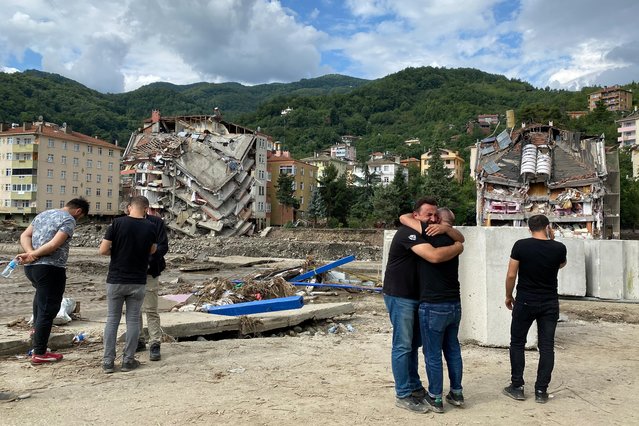 Locals react as they stand near partially collapsed buildings as the area was hit by flash floods that swept through towns in the Turkish Black Sea region, in the town of Bozkurt, in Kastamonu province, Turkey, August 14, 2021. (Photo by Bulent Usta/Reuters) 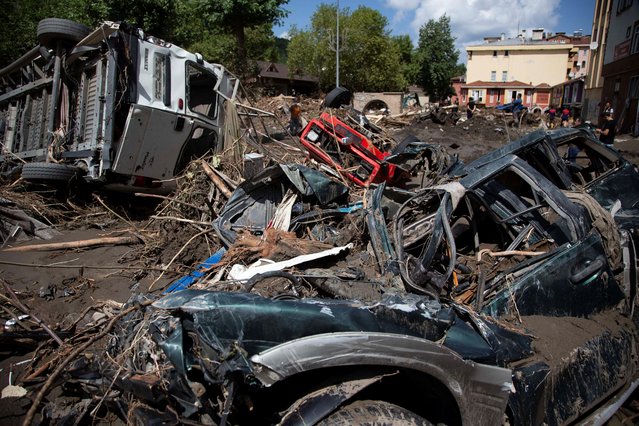 Vehicles are seen in the debris of flash floods that swept through towns in the Turkish Black Sea region in Bozkurt, a town in Kastamonu province, Turkey, August 13, 2021. (Photo by Can Erok/Demiroren Visual Media via Reuters) 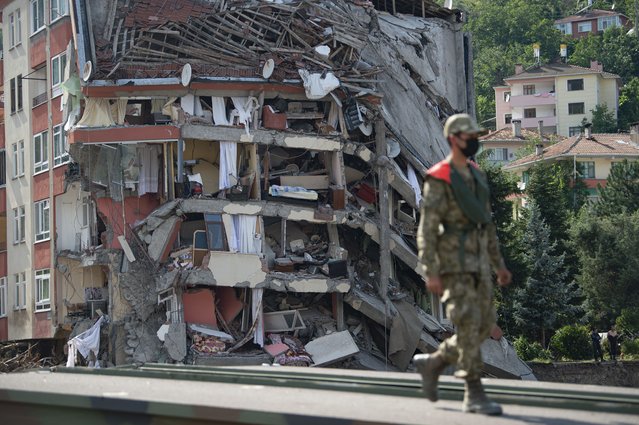 A soldier walks on a temporary bridge set up by military in Bozkurt town of Kastamonu province, Turkey, Sunday, August 15, 2021, after flooding. Turkey sent ships to help evacuate people and vehicles from a northern town on the Black Sea that was hard hit by flooding, as the death toll in the disaster rose Sunday to at least 62 and more people than that remained missing. (Photo by AP Photo/Stringer) 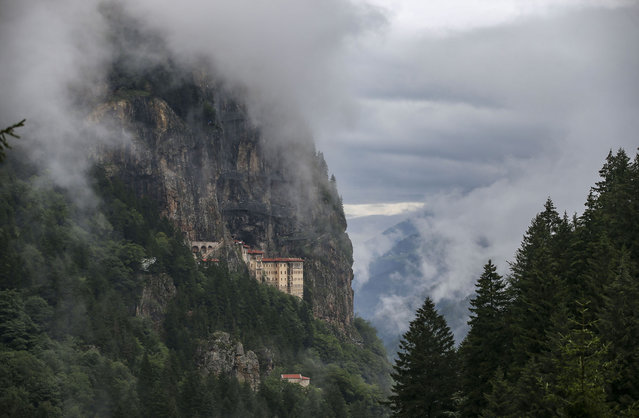 A view of the Sumela monastery, where Ecumenical Patriarch Bartholomew I, the spiritual leader of the world's Orthodox Christians, held a Divine Liturgy to mark the “Dormition of the Mother of God”, in Trabzon, Turkey, Sunday, August 15, 2021. (Photo by Emrah Gurel/AP Photo) Ecumenical Patriarch Bartholomew I, the spiritual leader of the world's Orthodox Christians walks, after a Divine Liturgy at the Sumela monastery to mark the “Dormition of the Mother of God”, in Trabzon, Turkey, Sunday, August 15, 2021. (Photo by Emrah Gurel/AP Photo) 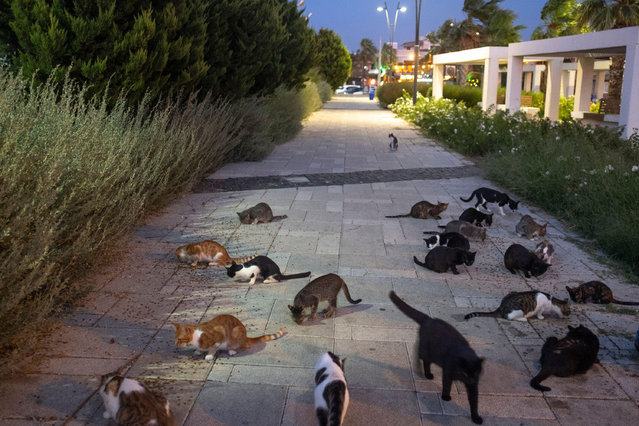 Stray cats eating their meals in a pedestrian walkway in Izmir, Turkey on August 13, 2021 . Many people feeding stray animal regularly in the street in Izmir-Turkey. (Photo by Uygar Ozel/ZUMA Press Wire/Alamy Live News) 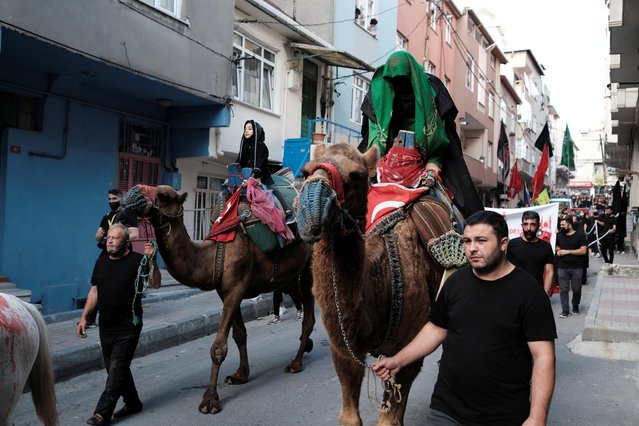 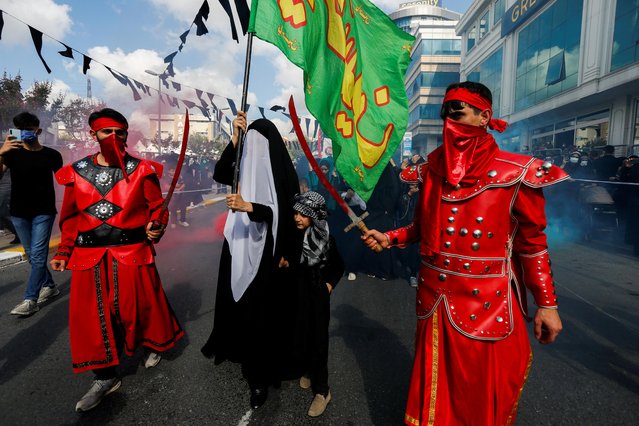 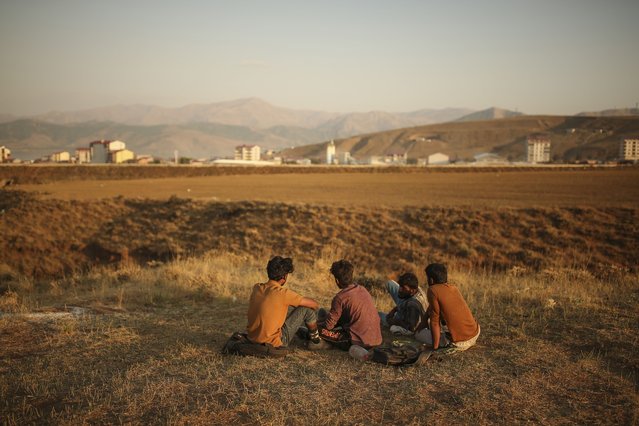 Young men who say they deserted the Afghan military and fled to Turkey through Iran sit in the countryside in Tatvan, in Bitlis Province in eastern Turkey, Tuesday, August 17, 2021. Turkey is concerned about increased migration across the Turkish-Iranian border as Afghans flee the Taliban advance in their country. (Photo by Emrah Gurel/AP Photo) 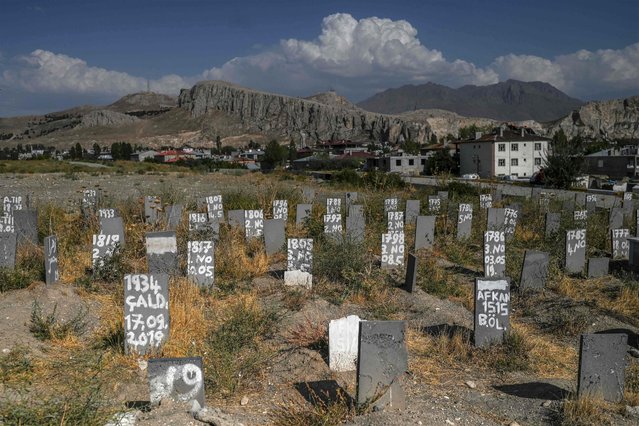 A picture taken on August 16, 2021 in Van, eastern Turkey, shows gravestones of unidentified migrants who have died crossing the Turkish-Iran border. The latest chaos in Afghanistan sparked by the recent gains of territory by the Taliban including the takeover of the capital Kabul has raised fresh alarm over an influx of migrants into Turkey through the Iranian border. Turkey, which shares a 534 kilometre (331 miles) border with Iran, has beefed up its frontier and started building a 243 kilometre wall in a bid to prevent any passage of illegal migrants. (Photo by Ozan Kose/AFP Photo) 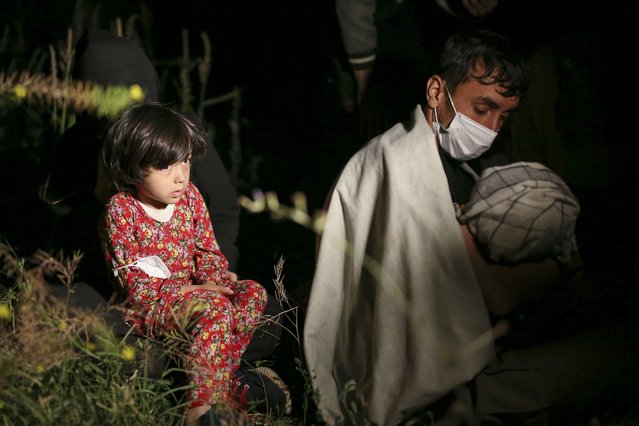