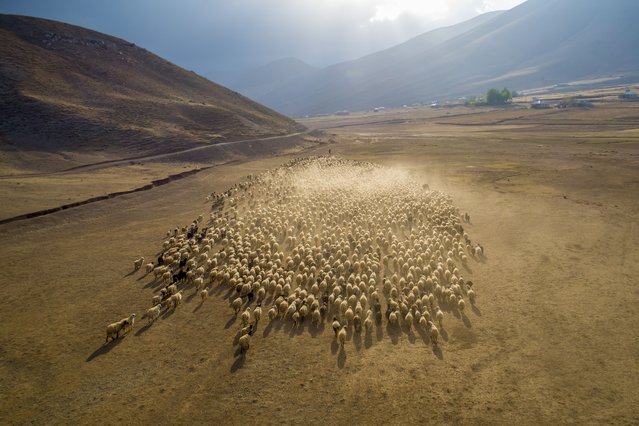 A drone photo shows an aerial view of a flock of sheep on their way with breeders to back warmer places in Catak district of Turkey's southeastern province Van on September 24, 2021. Flocks of sheep being brought down from highlands by stock breeders to warmer stockyards before winter season. (Photo by Ozkan Bilgin/Anadolu Agency via Getty Images) 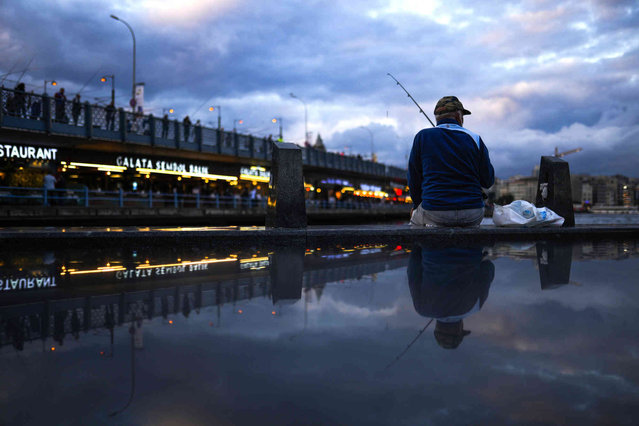 A fisherman casts his line into the Bosphorus next to Galata bridge in Istanbul, Turkey, Wednesday, September 29, 2021. (Photo by Francisco Seco/AP Photo) 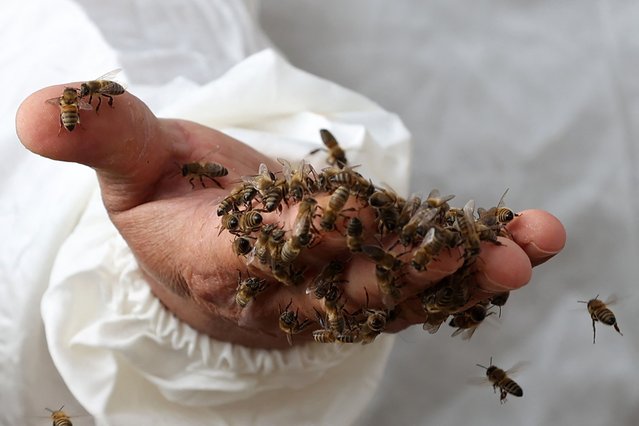 Bees hover around the hand of a beekeeper, in the village of Cokek, in the Mugla province, southwestern Turkey, on September 23, 2021. Mugla is home to around 3.5 million of Turkey's eight million bees, but pine honey production has been significantly affected by the worst forest fires in Turkey this summer, burning down the pine trees where the basra beetle lives. (Photo by Adem Altan/AFP Photo) 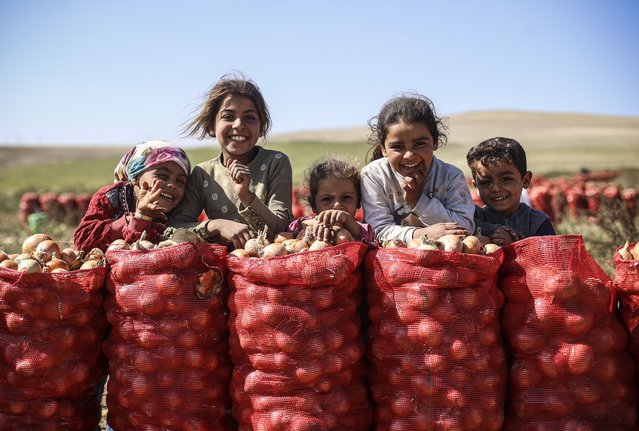 Seasonal agricultural workers, coming from the provinces of Southeastern parts of Turkey to make money, are seen at Adatoprakpinar town in Polatli district of Ankara, Turkey on September 29, 2021. Every year seasonal agricultural workers, come to Ankara, ranks first in onion production, and start to work in the spring season, then return to their hometowns in mid-November when the weather gets colder. While they live in tents, they faced with some problems including water, electricity and education, work in the field for long hours. (Photo by Esra Hacioglu/Anadolu Agency via Getty Images) 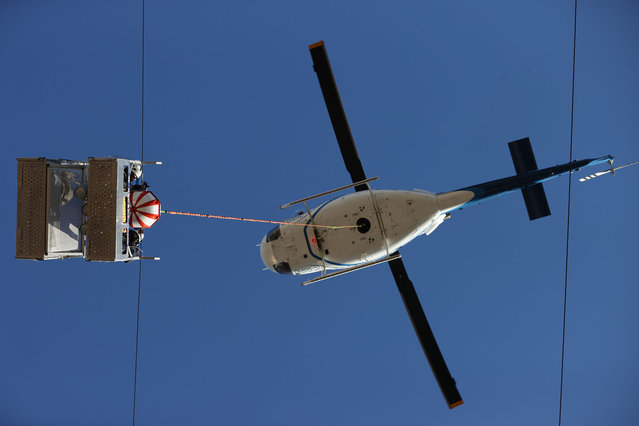 Maintenance team of Turkish Electricity Transmission Corporation (TEIAS) conducts an installation work of marker balls on 170 thousand volt transmission line from a basket lowered by a rope attached to the helicopter near Yunuseli Airport in Osmangazi district of Bursa, Turkey on September 30, 2021. (Photo by Ali Atmaca/Anadolu Agency via Getty Images) 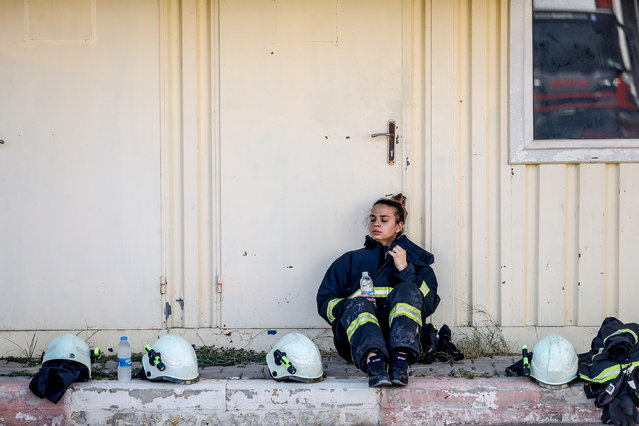 Female firefighters get ready for a practice as 24 female members of Antalya Metropolitan Municipality devotedly work for rescuing the lives and properties of people in Antalya, Turkey on September 29, 2021. (Photo by Mustafa Ciftci/Anadolu Agency via Getty Images) 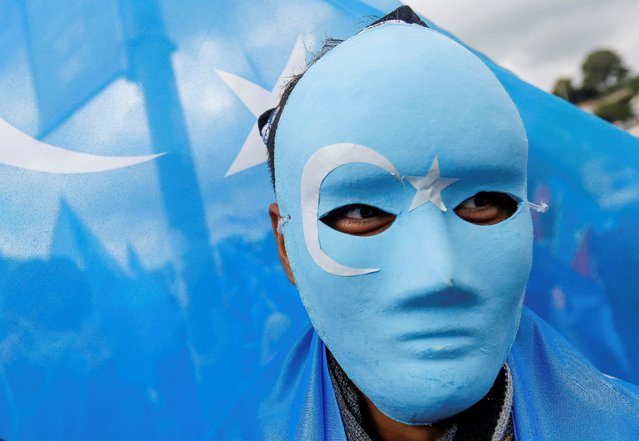 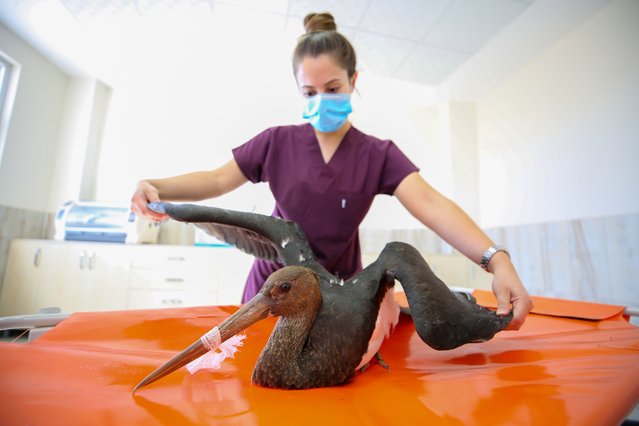 A veterinarian takes care of a black stork, one of the rare migratory bird species in Turkey, found in Diyarbakir with its feathers cut off, at Dicle Wildlife Rescue and Rehabilitation Center in Diyarbakir, Turkey on September 29, 2021. (Photo by Bestami Bodruk/Anadolu Agency via Getty Images) 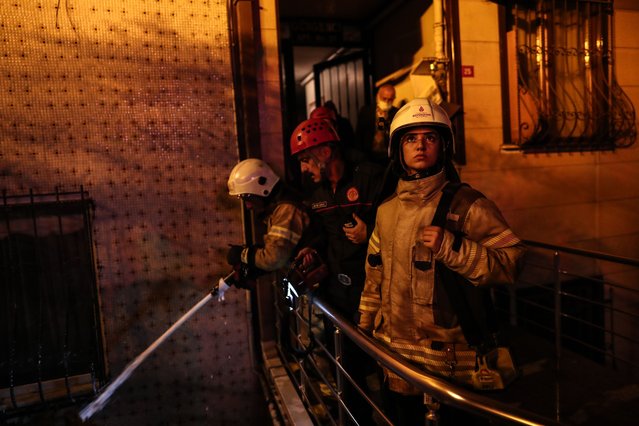 Female firefighter Dilara Karabulut with her team at work at traffic accident in Sisli district, Istanbul, Turkey, 04 October 2021. The historic 100-year-old firefighting department in Istanbul, since the summer, has welcomed women in Turkey, a majority Muslim country ruled by the Islamic conservative AKP, to its ranks. “When I grow up I want to be a firefighter” was not something any of these 37 women ever said when they were girls. Even though there have been female firefighters in some towns since 1988, seeing a woman wielding an axe and hose in Turkey is still extremely rare. “It's not considered a woman's job, but since I was little I used to do things that are seen as boys' jobs, so my family didn't see anything unusual about it”, says Ceyda Cirik, 22, at the fire station in Basaksehir, a suburb of Istanbul. She has just returned from an operation in a burned-out factory, along with her colleagues Esra Ücler and Rüveyda Tös. The three of them are part of a team with about 10 men who, after initially viewing the new recruits with suspicion, soon got used to the novelty. Being a firefighter has a long tradition in Istanbul, which was formerly built almost entirely of wood. The volunteer fire departments, the so-called 'tulumbacilar' of the 18th and 19th centuries, with their iconic uniform of jacket, stilts and sash, became an image of masculinity and courage. The offer of 50 vacancies for female firefighters – 37 of which only could be filled, as not all candidates passed the exams and physical tests – is quite the political statement from the Istanbul mayor's office, which since 2019 has been in the hands of the social democratic CHP party, the AKP's main rival. (Photo by Sedat Suna/EPA/EFE) 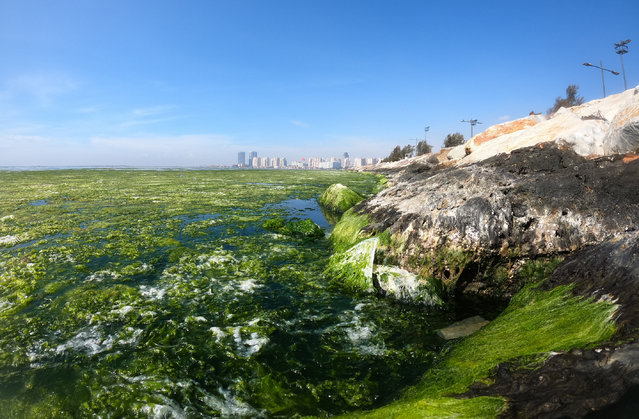 A view of Bostanli coast covered with sea ââlettuce (Ulva lactuca) spreading in Gulf of Izmir, Turkey on October 10, 2021. Sea lettuce, which grows due to the increasing of nitrogen and phosphorus because of water pollution, covered water surface of the lagoon, which hosts bird species, as well as the northern shores of the bay. (Photo by Mahmut Serdar Alakus/Anadolu Agency via Getty Images) 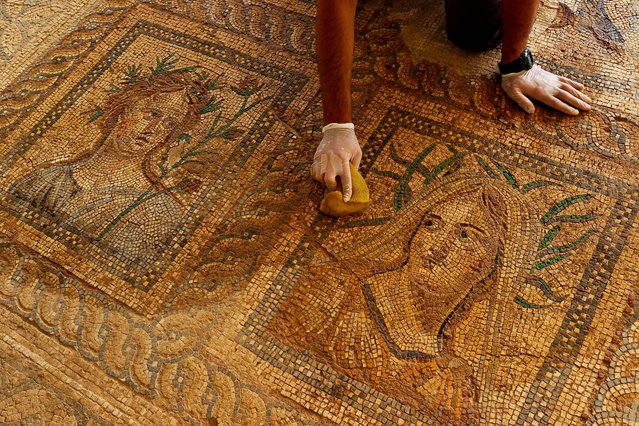 A photo shows restored mosaics, that shed light to 1800 years ago, at Metropolis Ancient City in Torbali district of Turkey's Izmir on October 12, 2021. After using modern techniques that ensure the preservation of colors and grains for a longer time, mosaics resembling the paintings of Eros, the God of love in Greek mythology, ancient Greek god Dionysus and his wife Ariadne, became prominent. (Photo by Mehmet Emin Menguarslan/Anadolu Agency via Getty Images) 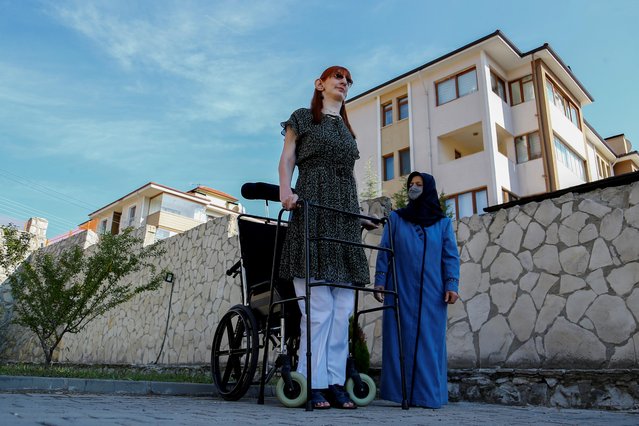 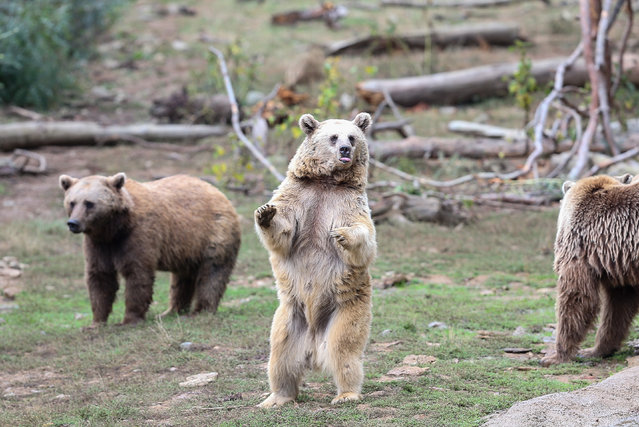 Bears are seen in the bear shelter at the Ovakorusu Celal Acar Wildlife Rescue and Rehabilitation Center in the Karacabey district of Bursa, Turkey on October 12, 2021. In the center, special care programs are implemented for the bears to have a more comfortable winter. Bears prepared for hibernation period in the special living areas in the center are given special foods high in protein as well as fruits, bread, chicken and fish by the staff. (Photo by Sergen Sezgin/Anadolu Agency via Getty Images) 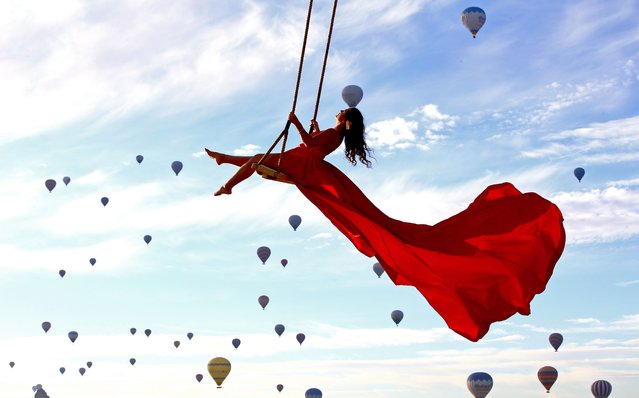 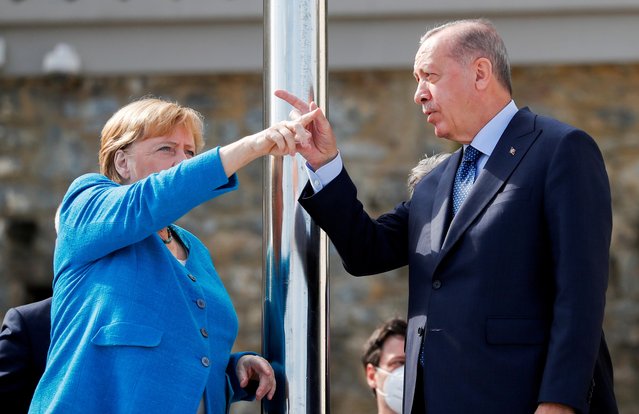 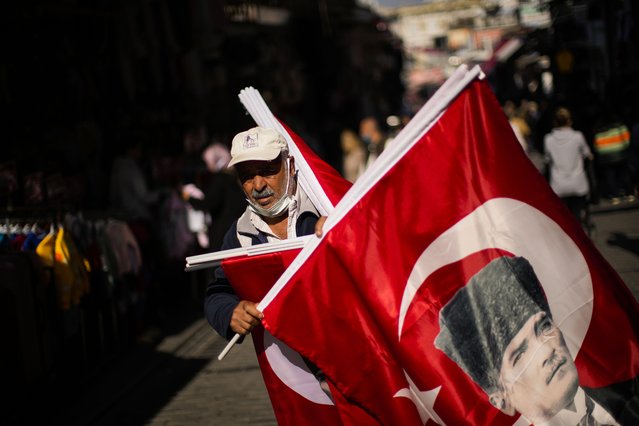 A vendor sells Turkish flags with the portrait of Mustafa Kemal Ataturk, founder of the modern Turkey, in a street market at the Eminonu district in Istanbul, Turkey, Thursday, October 21, 2021. The Turkish lira plunged to a record low against the U.S. dollar Thursday after a harsher than expected cut in interest rates. (Photo by Francisco Seco/AP Photo) 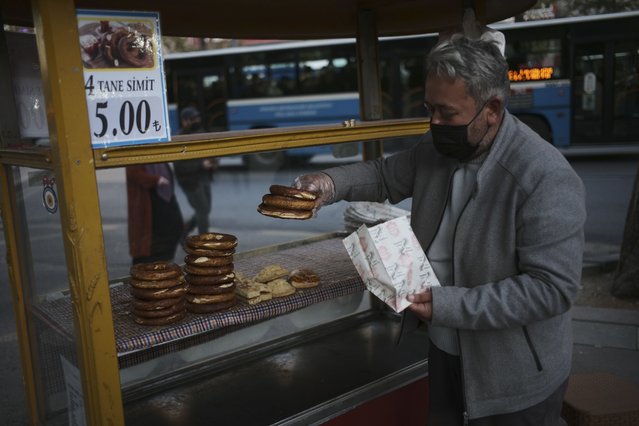 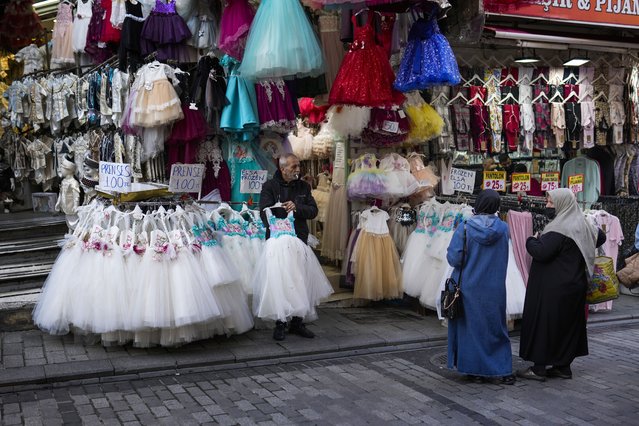 A vendor talks to clients in a street market at the Eminonu district in Istanbul, Turkey, Thursday, October 21, 2021. (Photo by Burhan Ozbilici/AP Photo) 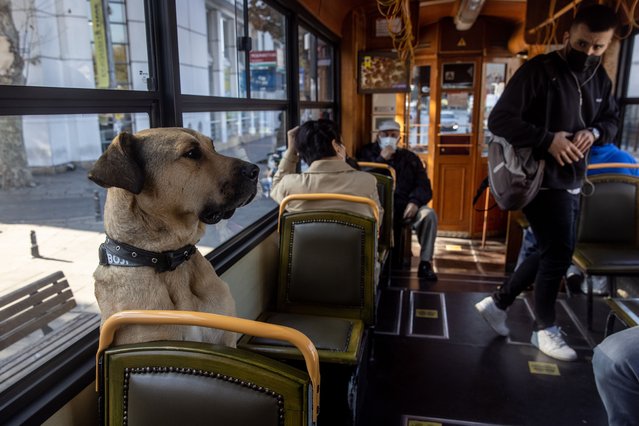 Boji, an Istanbul street dog rides Kadikoy's historic tram on October 21, 2021 in Istanbul, Turkey. Boji, is a regular Istanbul commuter, using the cities public transport systems to get around, some times traveling up to 30 kilometers a day using subway trains, ferries, buses and Istanbuls historic trams. Since noticing the dogs movements the Istanbul Municipality officials began tracking his commutes via a microchip and a phone app. Most day's he will pass through at least 29 metro stations and take at least two ferry rides. He has learnt how and where to get on and off the trains and ferries. As people began to notice him as a regular on their daily travel routes and since the tracking app begun Boji's travels have made him an internet sensation. (Photo by Chris McGrath/Getty Images)
Edit Del
28 Oct 2021 06:05:00, post received 0 comments
Publication archive:
←   →
Popular tags:
All tags
Last searches: